In late April, taking advantage of some holiday days,  I decided, even if I was alone, to give me a week of windsurfing. After evaluating several options in Italy (Lake Garda, Sicily) and abroad (Canary Islands) I opted for the nearby Sardinia, reachable from Milan in just  an hour's flight and at very affordable prices (round-trip flight just more than 40 €). I went to the Windsurfing Club Sa Barra. Landed in Cagliari, I was greeted by a nice Mistral, which fortunately has followed me all the way.

The road from Cagliari to Sant'Antioco is very smooth (pay attention to speed cameras!), but not so beautiful as far for the landscape concerns. Once you arrive after Carbonia, you begin to see the sea again, and you drive along a road, with sea on both sides, connecting the island of Sant'antioco to Sardinia. I was greeted by a nice mistral tense and constant 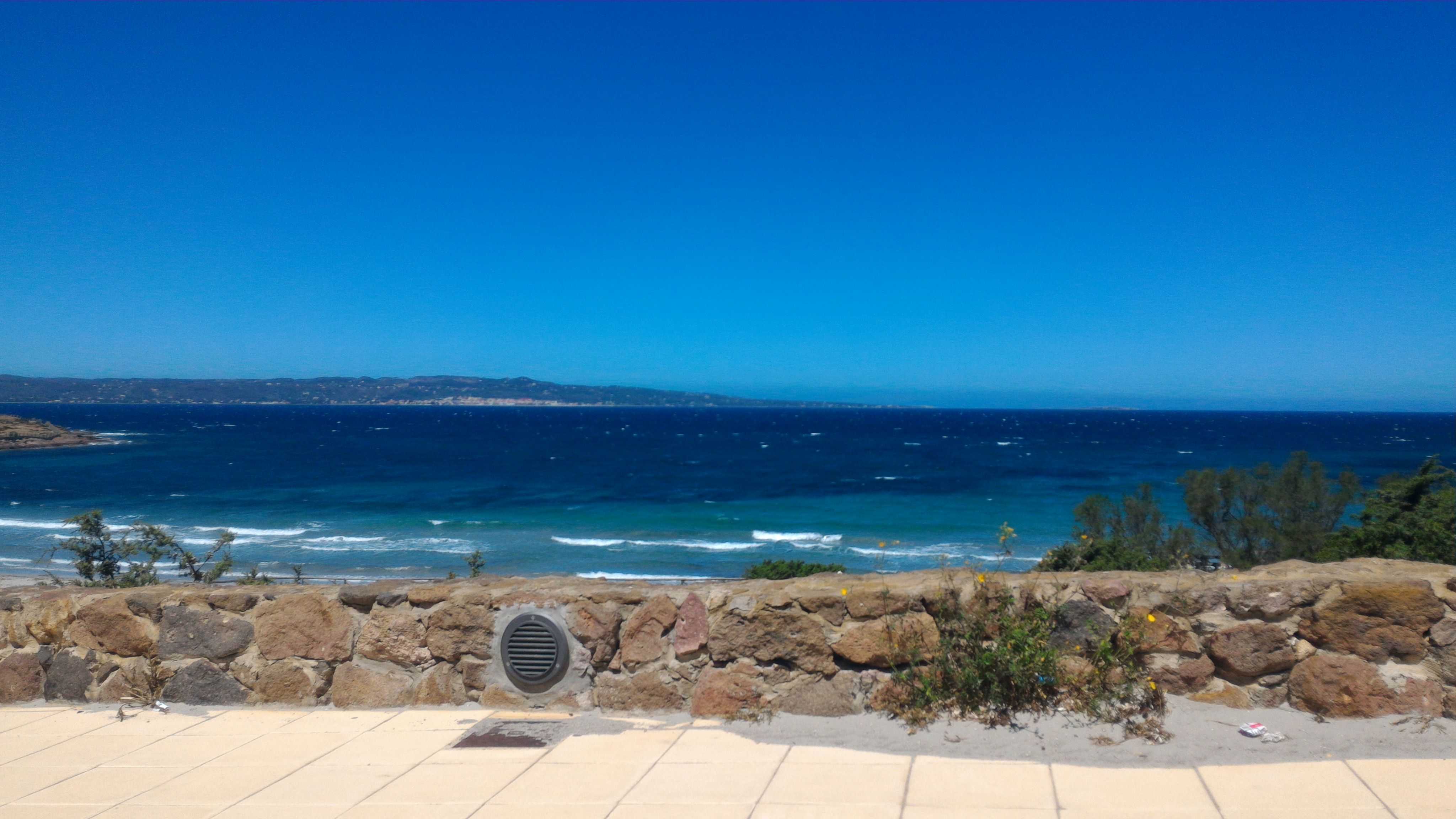 Sant'Antioco island offers lots of places where to sleep. The most comfortable countries to surf at Sa 'Barra are Sant'Antioco and Calasetta. After a short research, I found a good B&B in Calasetta, with excellent value for money. I was looking for a clean room, with a comfortable bed and a shower: all requirements have been met for 35 €/night, breakfast included! 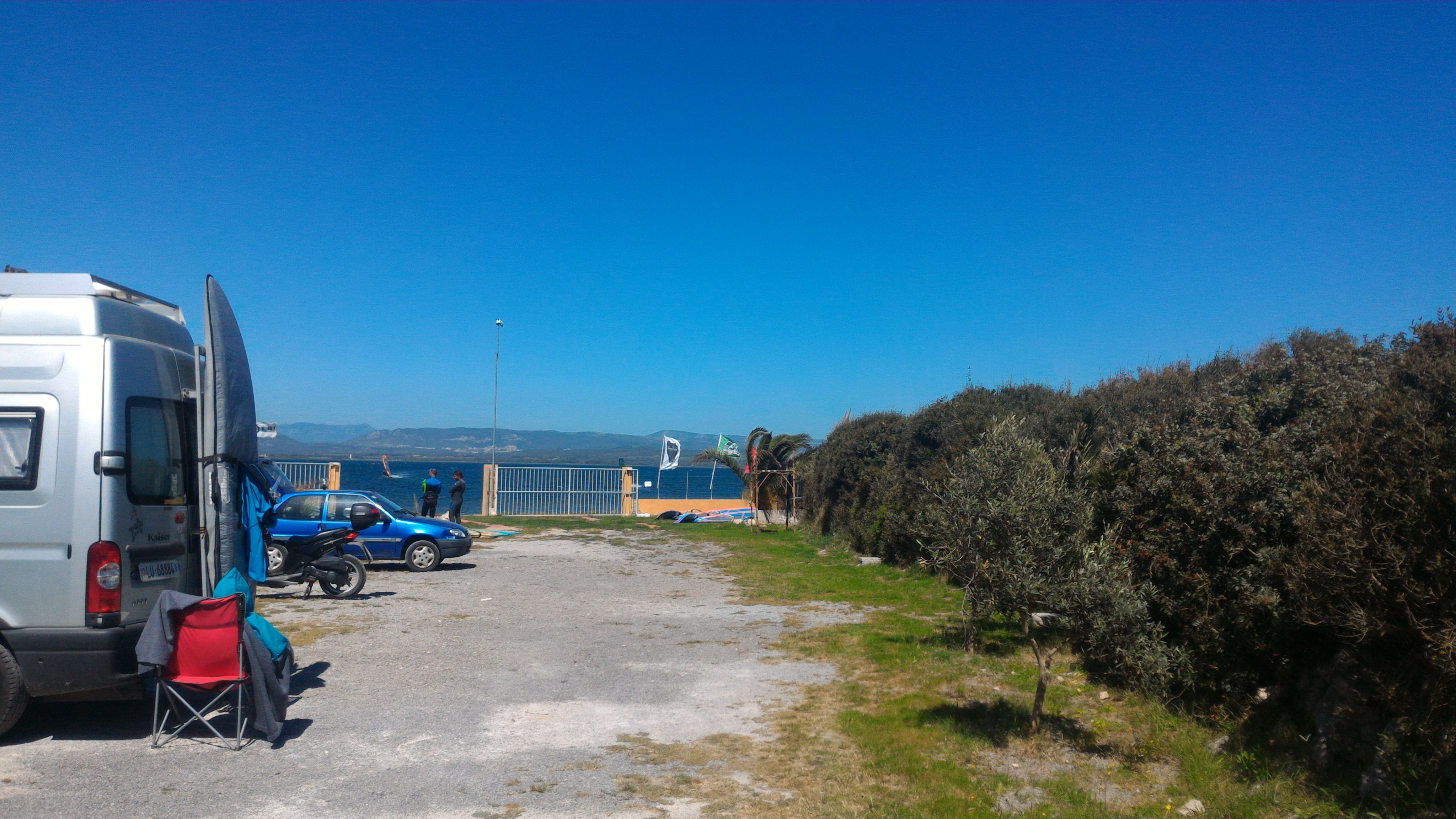 Once arrived in Sant'Antioco, since the Mistral was already blowing I rushed to Sa Barra. So, I left at 8.30 from Milano - Orio al Serio airport, ad at 12.30 I was at the spot! Upon arriving, I was greeted by Gigi Madeddu, "the landlord"! We had already chatted by phone, in the days before, for a bit of information, and not seeing me coming, Gigi had also tried to contact me to show me the way (all week of my staying, he has acted as my wind alert, in order to give me the opportunity to go sight seing as tourist, while waiting for the wind; even when he had a fever of 39 degrees!). I opted for renting the windsurfing equipment, because it was cheaper than having to carry it by plane and having to rent a decent sized car. In this way, I had the opportunity to use new equipment (Neil Pryde sails, 99 Boards), and always suited to the wind conditions, with Gigi's and Rossel's tips on the right equipment to use. 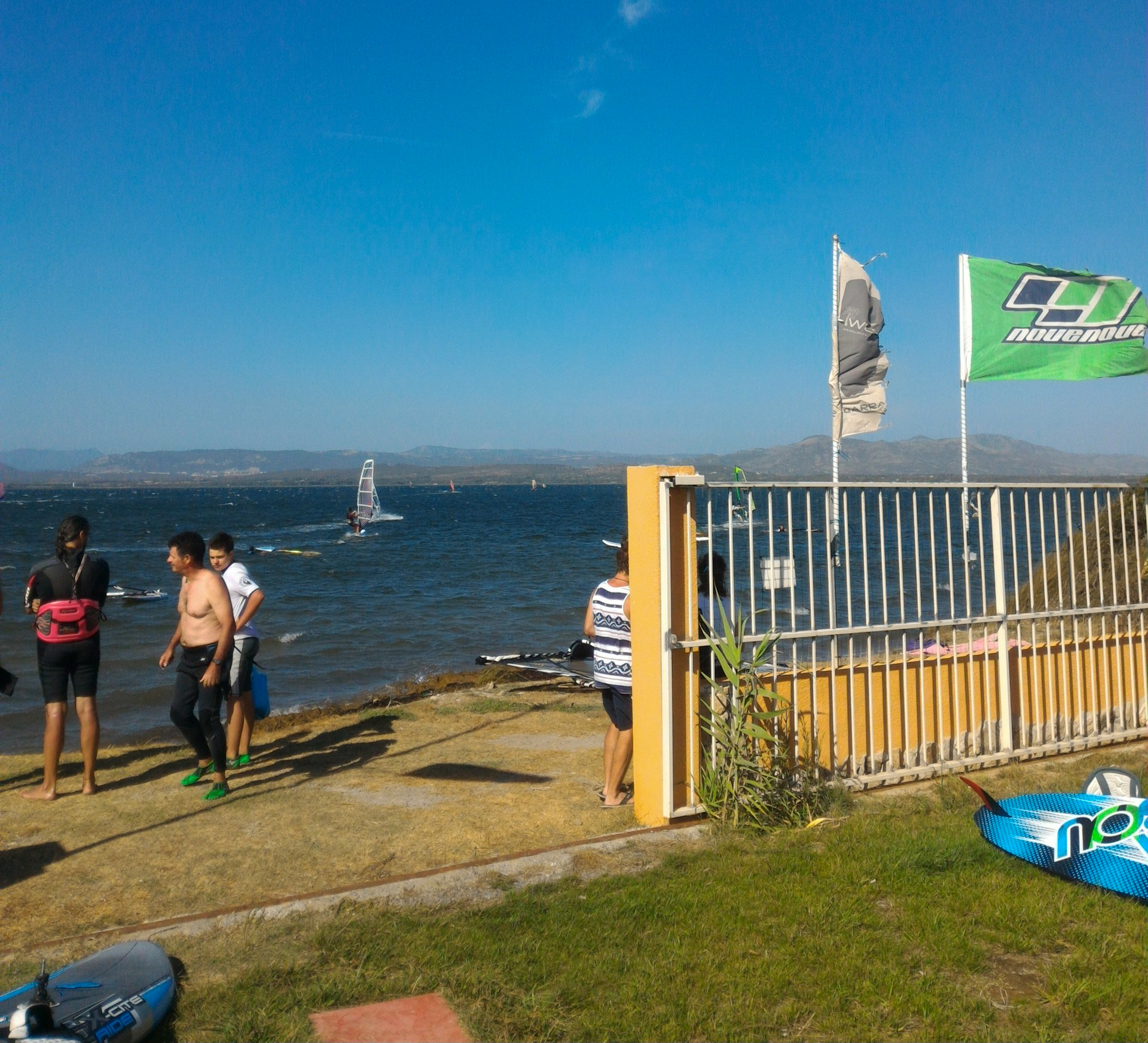 At the Windsurf Center Sa Barra, they are very hospitable. In the week I was there, beyond me, there were some Swiss guys with their camper. The day of my departure, close to the weekend of April 25 (national holiday in Italy), crowding turnout almost quadrupled, but, despite this, there was room for everyone to be able to prepare the equipment in peace. 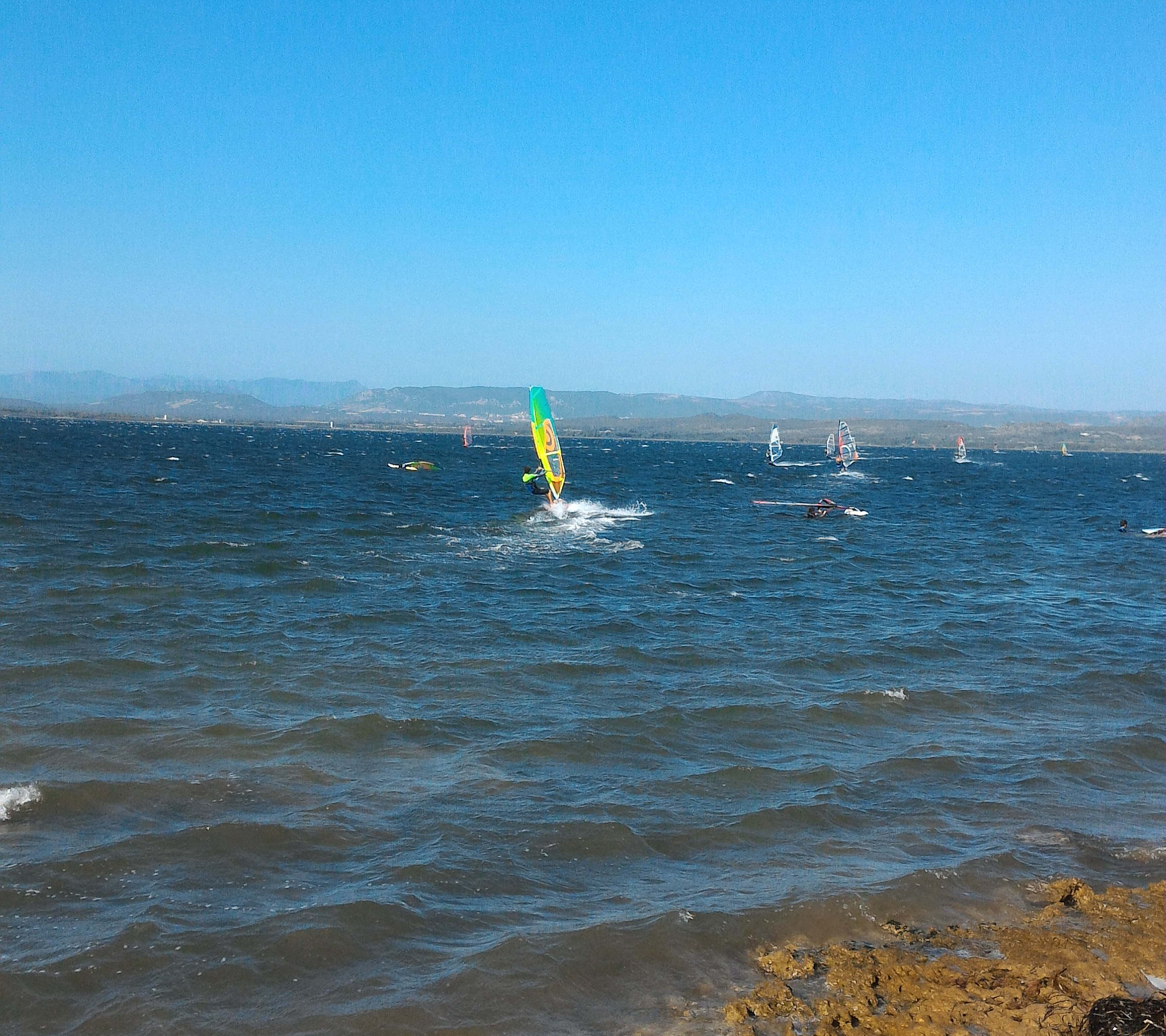 In five days, I went out 3 days with 4.7 full, and two days with 6.2 (to be fair, one of the two days with 6.2, I rode slowly, searching for each gust). My goal for these five days was to learn the waterstart and after many attempts and supported by the right wind, I finally managed to perform it! I was helped by the spot conditions, a lagoon with a bottom, never too deep (but pay attention to the rocks), so that sometimes you are allowed to put your feet down and get some rest. In addition, the lagoon conformation, makes your riding safe, even in case of drift. Anyway, Gigi and Rossel are always generous with tips on the spot. Since the seabed made of rocks surf shoes are strongly recommended. I did not use it because it seemed to me that I would have had less sensitivity on the board, and came back with feet with lots of wounds. In addition, for the first 15 meters, shallow water could damage the fin. This element is to be remembered even during re-entry arrives to avoid you, if still fully planing, splitting the fin and making a nice flight. 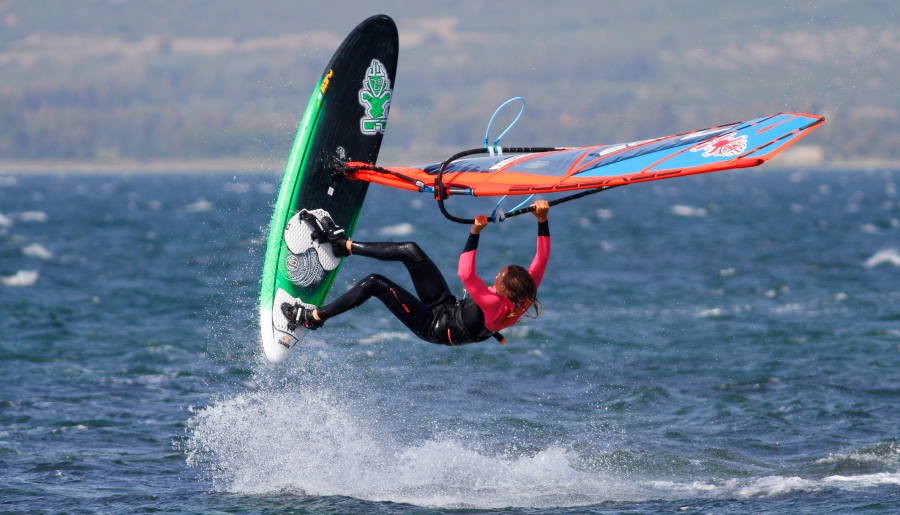 The riders level in the water is very high (among others, Gigi, Rossel, Giovanni Passani, Niccolò Tagliafico). At the beach, there is a very friendly atmosphere, which makes you appreciate even more the environment. 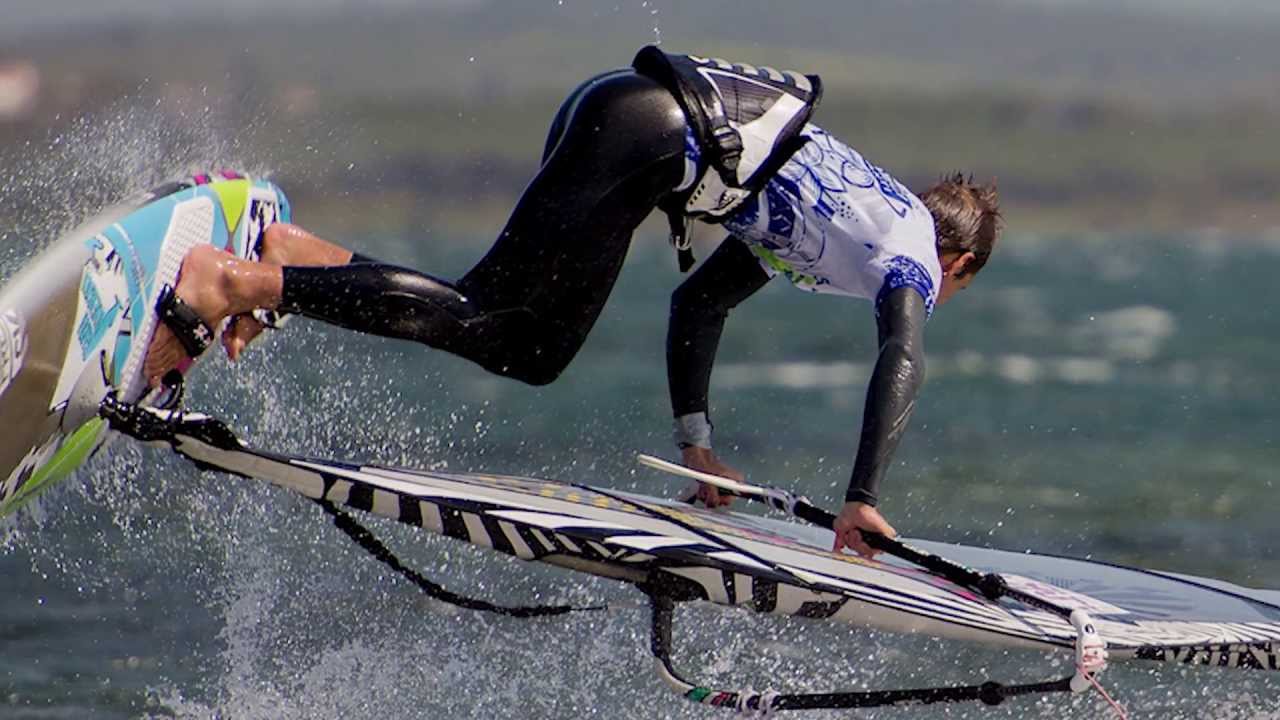 I returned in August with my family (wife, who doesn't love wind, and 1 and a half year old baby): two days out of seven of mistral wind at 30 knots; in the other days, little wind, so that I could enjoy the island from a touristic point of view. We slept in Calasetta, at 20 meters from "Grande" beach, and we visited some of the other island beaches. I also recommend a trip to Carloforte, accessible by ferry in about 30 minutes.
At evening, Calasetta and Sant'Antioco do not offer much more than some places for dinner and a walk.

Positive note: in mid-August at the beach, there were lots of people, but never so many to make the beach unlivable.

Spot for: Freeride/Freestyle
When: all year long
How to get there: Airplane to Cagliari, then about 50 minutes by car
Do not forget: surf shoes
What to do when there is no wind: The island of Sant'Antioco is rich in beaches, many of which are quite wild. In Sant'Antioco (village), there is also the opportunity to visit an archaeological site of the Roman period. By ferry, you can reach the nearby island of Carloforte.

Some videos that show spot coditions