Capo Mannu, in Sardinia, is a wave spot in the Mediterranean sea, where it is possible to surf huge dimensions waves, absolutely comparable to those of many important oceanic spots. But it's a spot for really experienced windsurfers, for the very demanding conditions that you have there.

We have had the pleasure to admire a session of a very high level rider, Roberto Festa, on Sunday, October 29, 2017, on occasion of a good mistral day. After our fantastic session in the near Funtana Meiga (read the report), we went to admire the beauty of Capo Mannu (after having also checked Putzu Idu). Capo Mannu is one of those places I love, where nature shows its fascinating power, and a still wonderfully wild beauty. The waves that struck the Cape Sunday impressed us not only because of their height (about 4-5 meters), but mostly due to their width between two subsequent wave troughes, around 15-20 meters, which made it clear their energy and strength. When they hit the rocks of the Cape, considerable splashes rose, immediately nebulized from the 25 to 30 knots mistral wind. 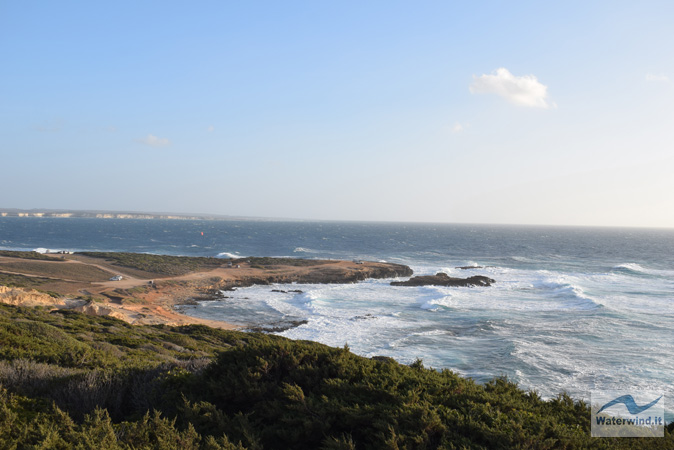 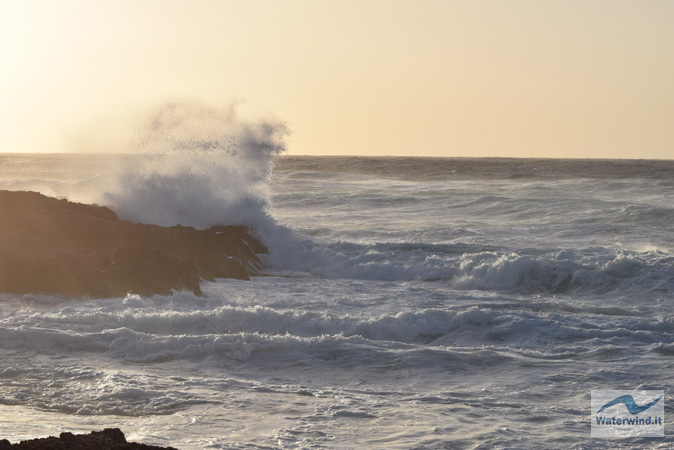 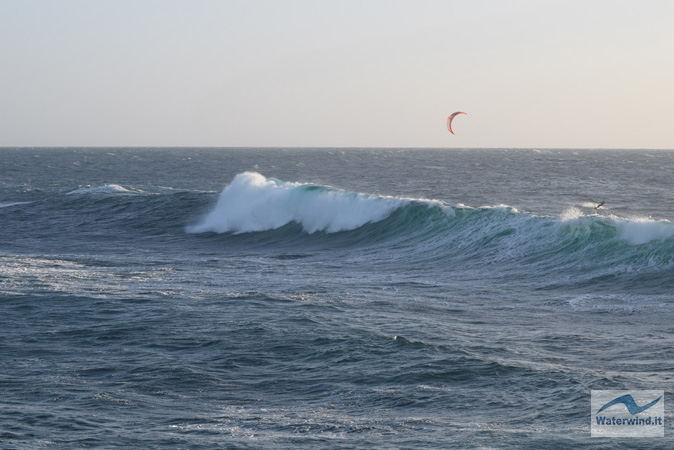 To play, with skill and awareness, in this scenario, there was only Roberto Fersta (at the time we were there), that you see in photos and video (Simmer Blacktip sail, and Quatro board). Without planing, it rode closed hauled to the best point to take the waves that came to the south side of the Cape. Once the wave was taken, and he gained a remarkable acceleration, the rider began surfing in frontside, going downwind about a hundred meters, and then getting out of the waves before it ended its run, finishing to break on the rocky coastline. Impressive, in the video and in the photos below, the moments when the wave breaks and foam goes to the hunt of the rider, of whom you can only see the sail top. 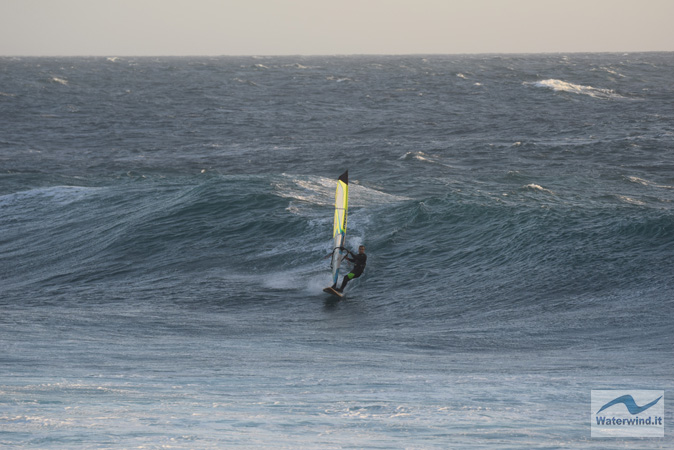 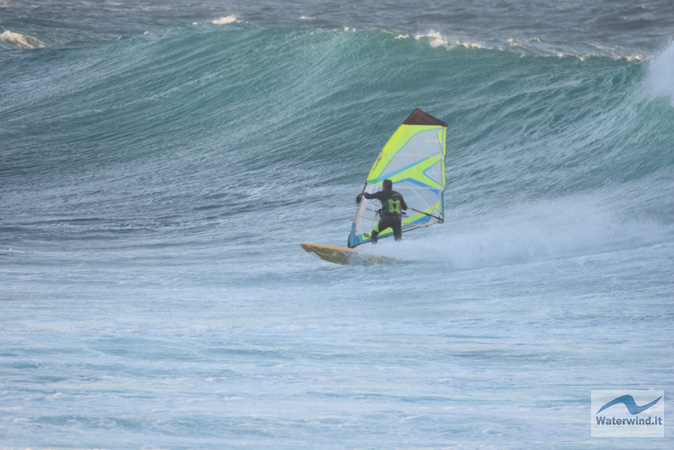 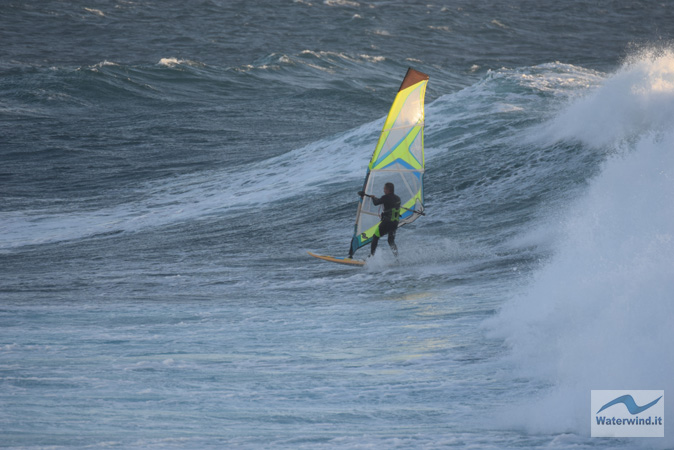 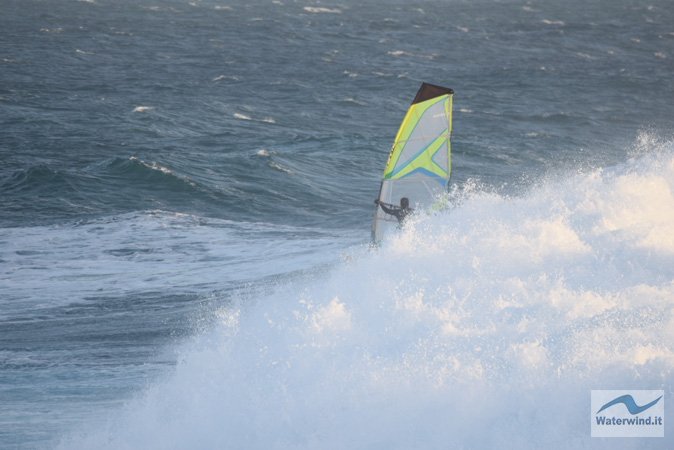 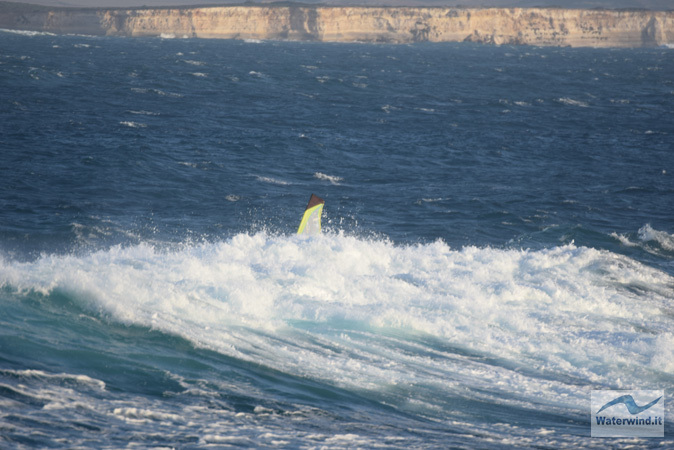 Even the exit from the water (not included in the video) was remarkable, with the rider surfing a last wave until the end, and entering a small rocky bay. When he reached the cliffs of the downwind shore, he lift the equipment with no hesitation out of the water in an instant, to avoid from undertow Chapeau! Undoubtedly, a stuff for a few .... To us, just the pleasure to admire the show.

Click here, to watch the whole slidegallery in high resolution

The video of the session at Capo Mannu

A video with Matteo Spanu at Capo Mannu