Back where it all began! Porto Pollo is the spot where, in 2012, I experienced the first planing, which made me definitely Windsurfing addicted. On April 2017, it was the first step of a beautiful new tour in this incredible land, called Sardinia.

Having seen better wind predictions for Sardinia, I left aside South France that would have required continuous and siginificant driving in search of wind; on Thursday morning (20 April), I booked a house and the ferry-boat, and, the day after, I was boarding to Sardinia. There, I would have met some friends of mine. I boarded in Livorno at 22,00 pm, on Friday, towards Olbia.

Saturday morning, at 7,00 am, Sardinia welcomes us with a sparkling air (9 ° C), but with a beautiful blue sky, and with the magnificent colors and panoramas of this land. Wind from the west is expected to blow, at 20 knots (windifinder and windytv).

I met with my friends (who took another ship) and we take a very good breakfast in fantastic Neapolitan pastry shop (yes Neapolitan, even if we are in Sardinia).

During this period, Palau is very enjoyable. There is little people, a relaxed atmosphere, and magnificent climate. Before heading to Porto Pollo, I go to a grocery store to have some sandwiches prepared for lunch, the first of a series of sandwiches with Sardinian ham and pecorino cheese, which will be the added value of the days.

Then we head to the parking of Porto Pollo near the Sporting Club Sardinia, so that we have the chance to ride both in the upwind bay (in choppy conditions) and in the downwind bay, in flat water conditions (read the review of the Porto Pollo spot). In the spot, there are already a good number of tourists (especially Germans, Swiss, and some French), but the spot is not at all croweded (as on August).

The Bay of Porto Pollo is always a breathtaking sight. 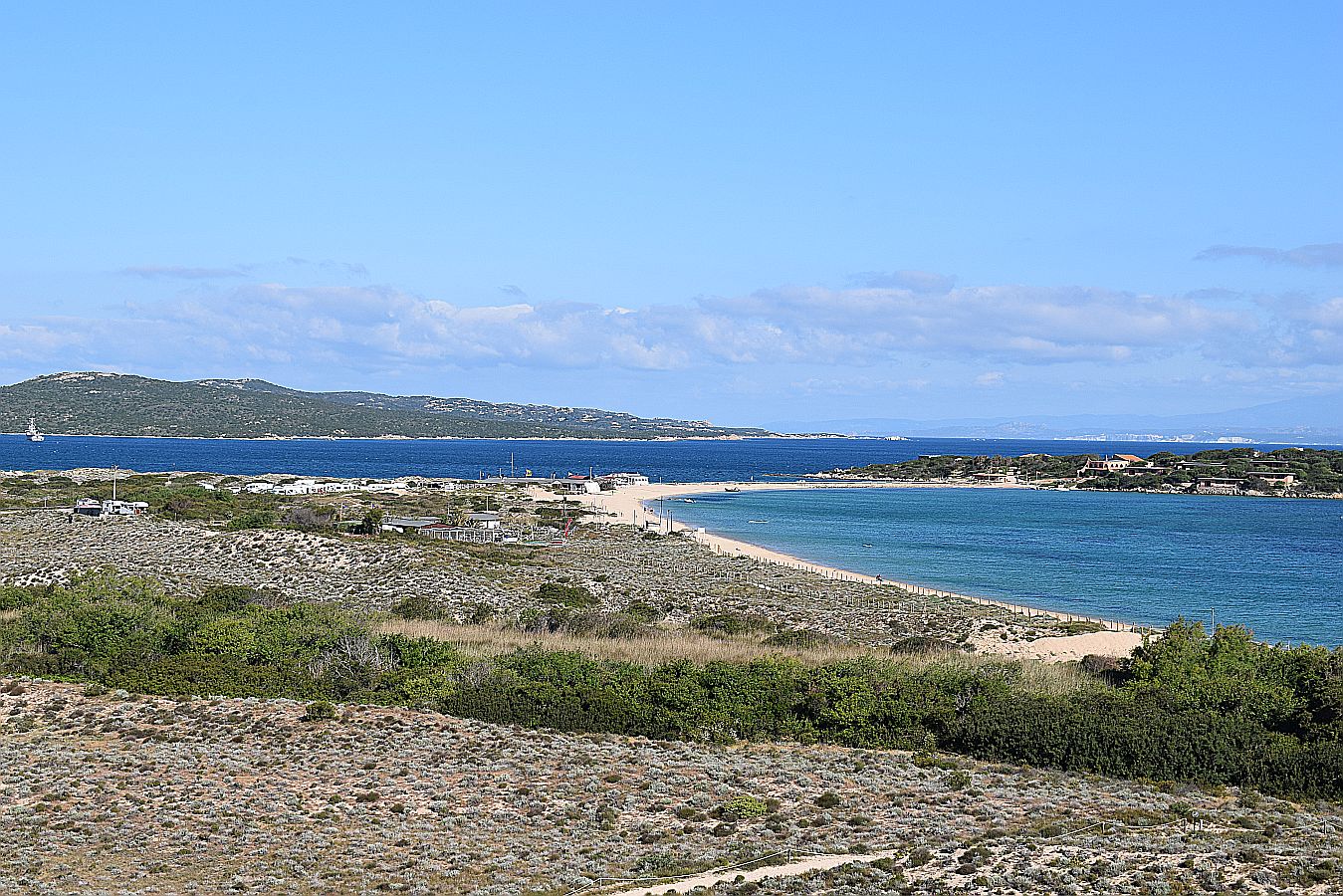 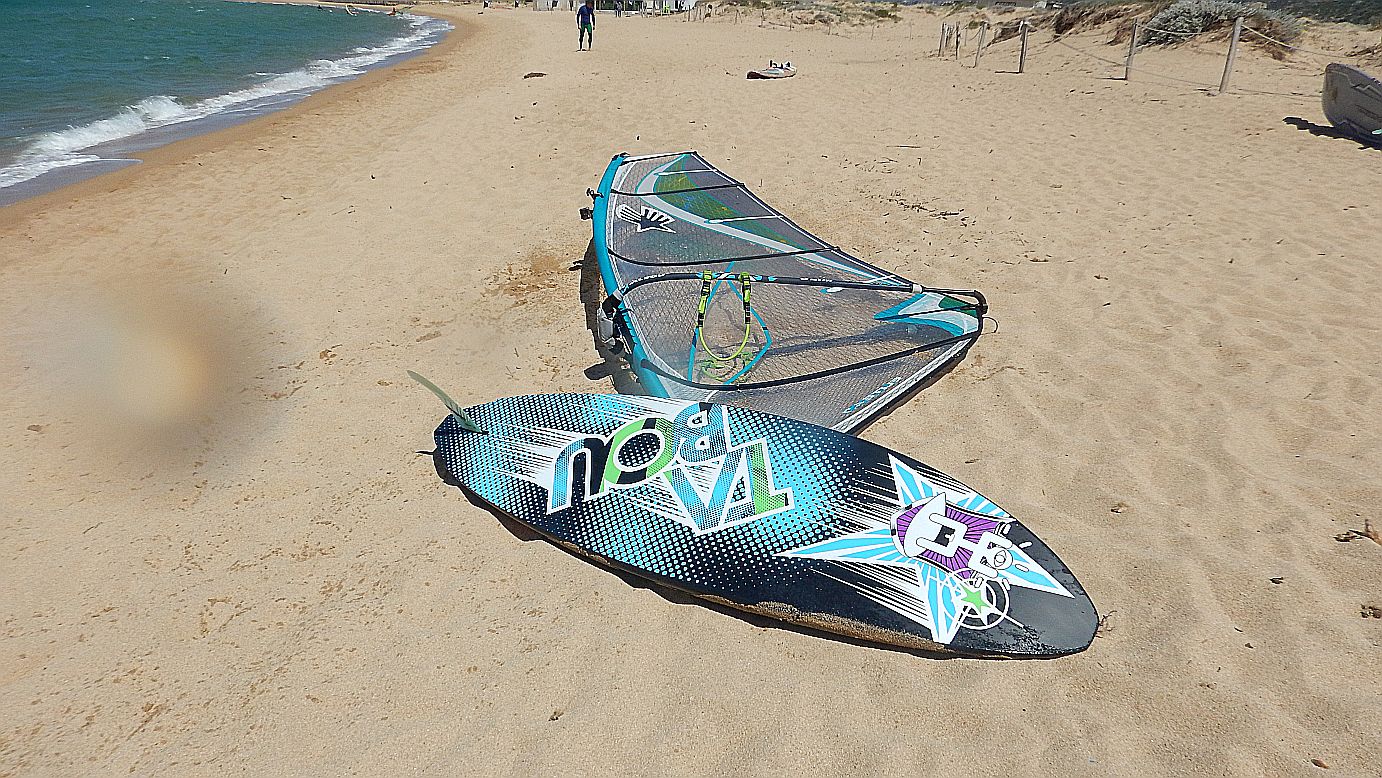 We opt to go out first on Coluccia's side, to benefit from some chop to jump. At the beginning of the morning, in fact, there is a chop of less than half a meter; then, the sea will rise. 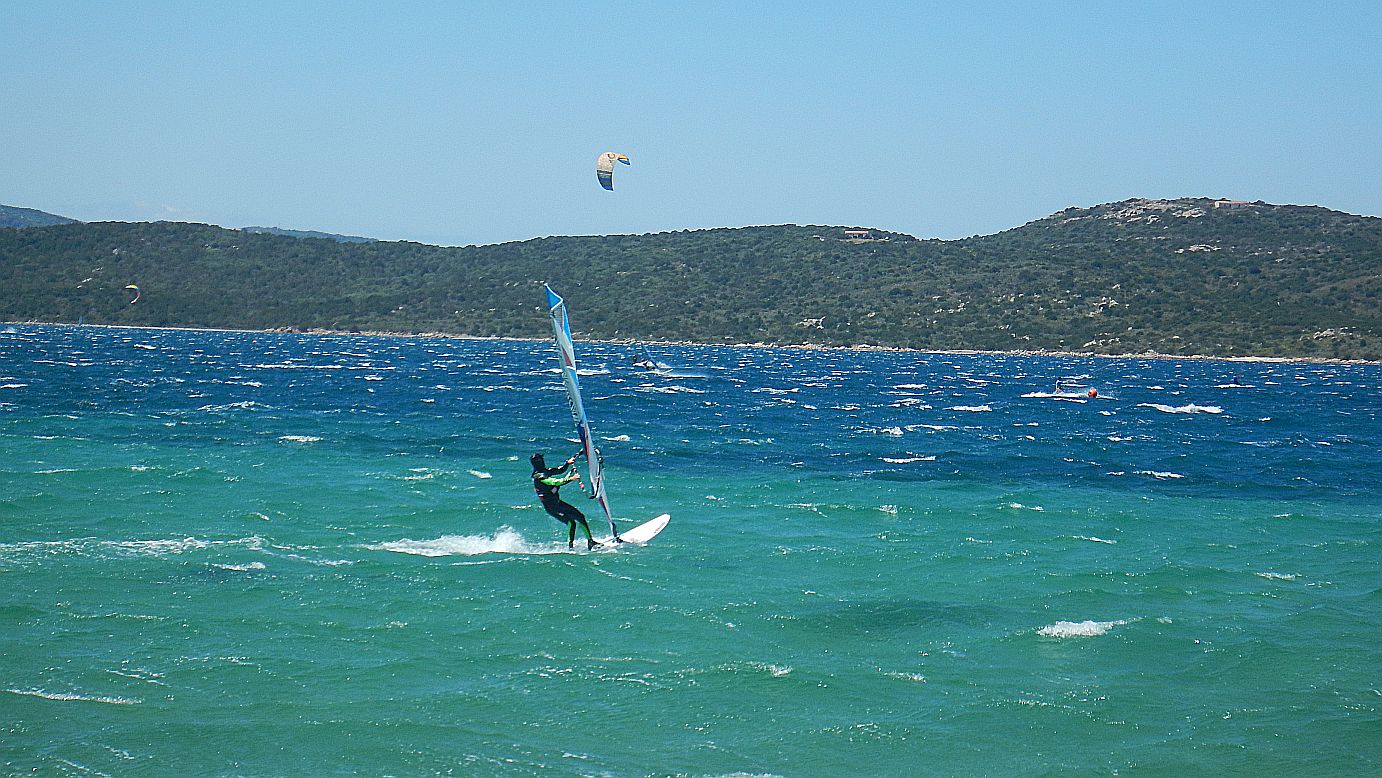 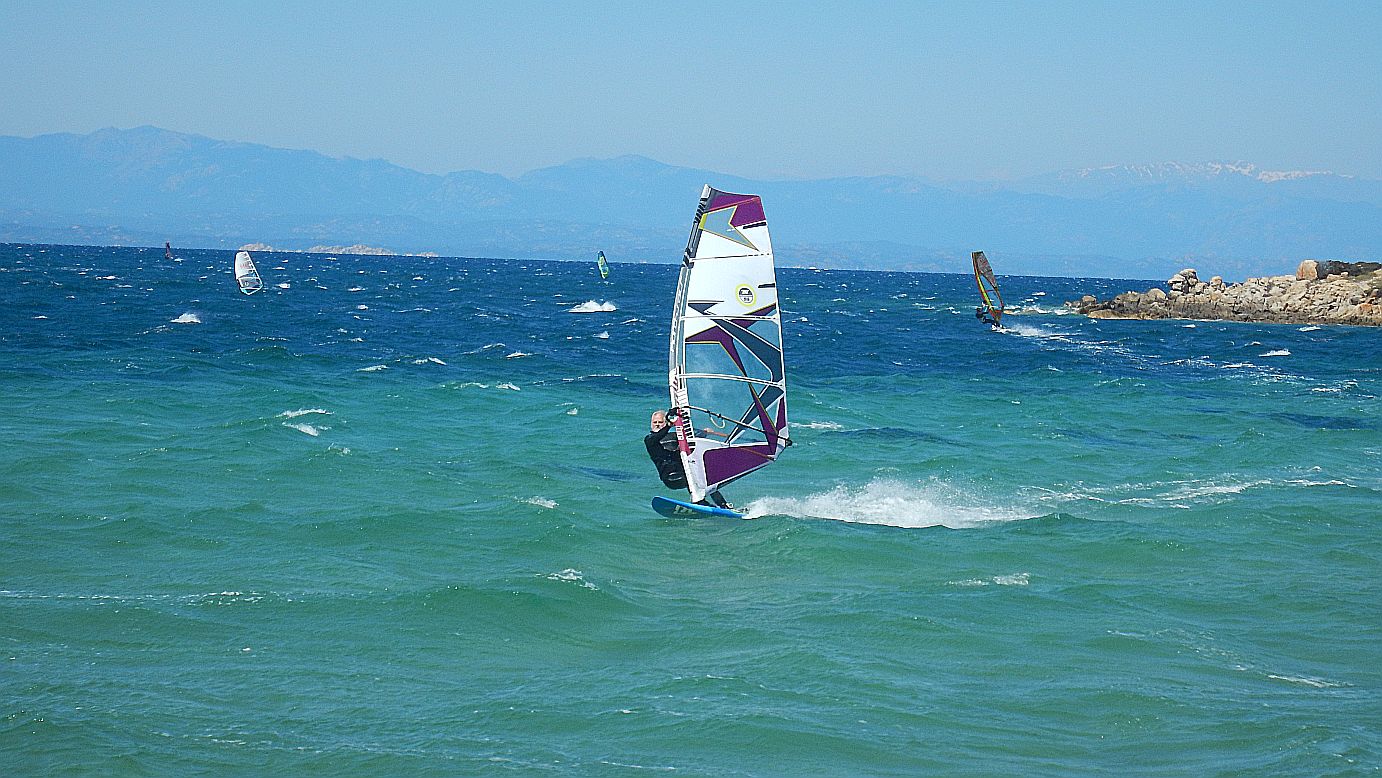 Entered in the water, we realize that the wind is quite fresh, and we are sometimes overpowered with 4.7. We surf in a short stretch of sea, with short rides between the Coluccia beach, and the Gabbiani (Gulls) Island, where the water gets slightly flat. In the event of a problem, you are immediately pushed to the beach. The landscape, as usual, is fascinating, with the pleasure of surfing in the Caribean like waters of Sardinia. The number of surfers in water is reasonable; the kiters are upwind, and cause no problem.

The wind is not very stable, with changes of direction and intensity; the water surface, so, suffers from that, becoming progressively more disordered, with a chop that, by the end of the morning, gets really messy: almost a meter, steep, not predictable, and not very enjoyable, except for some occasional jump .

The Tabou 3s confirms to be a very good board also in these conditions. It is fast, and it allows me to experience a lot of maneuvers, and to understand the best movements in each of them. In power jibe, it carves with a very regular radius. In fast tacks, it enters the wind with lots of speed. The freewave fin of 29, borrowed from a Fanatic freewave 105, however, does not convince me. The position of the fin (power box) seems to me quite near the stern in the Tabou, and therefore, in my opinion, the board does not like a fin with a drifting center too much positioned towards the stern. With Fanatic's fin, it seems to me that the board is more unstable. I will look for a 26-27 fin, with a less accentuated curvature, as the standard one (whch is a 32, though).

After over an hour in the water, I take a break to eat the sandwich. Then, back to the water, with the Fanatic 86, that I decide to try it. Trying a new board always gives emotions. It is worth noting that the wind has entered pretty well all over the spot, and it would more proper a 4.2 sail.

Under these conditions, even if they are not absolutely wave conditions, Fanatic 86 is better than 3S 106, I would say not so much for shape, but rather for the lower volume. But what I'm really interested in today, is, first of all, the ability to keep the route, to ride with a close-hauling direction, and to get planing, which are all features that are needed in onshore conditions I often meet, and above all, that are indispensable to forgive my many maneuvering errors (especially with such a small volume board), that often make me finish downwind. I like the board right away. It satisfies the above requirements and gives me the advantages of maneuverability of a low volume wave board. Obviously, you need an advanced stance, to get planing, not to spin out, and to ride better close-hauled.

In any case, after another hour, even with Fanatic, the conditions become little funny, both for the uncostant wind, but above all for the absurd and not predictable water plan. I bring the 3S to the downhill bay, always matched with the 4.7.

In the downhill bay, I spend another hour. Very flat water, wind of the same intensity as in the upwind bay, with bad gusts, and absurd speeds ... Within certain limits (due to unstable wind conditions), it is good to practice the maneuvers. I constantly try to refine power jibe, and fast tack, and start introducing what's going to be this year's target maneuver: hely tack, and duck jibe.

At around 16:30 pm, I end my session, having been in the water for over three hours.

The next day I go to try the Coluccia spot (i.e. Porto Liscia), hoping that the wind is more spreaded. The predictions still give West wind, but less strong (up to 20 knots). Before entering in the water, I watch a regatta, of Windsurfer class. 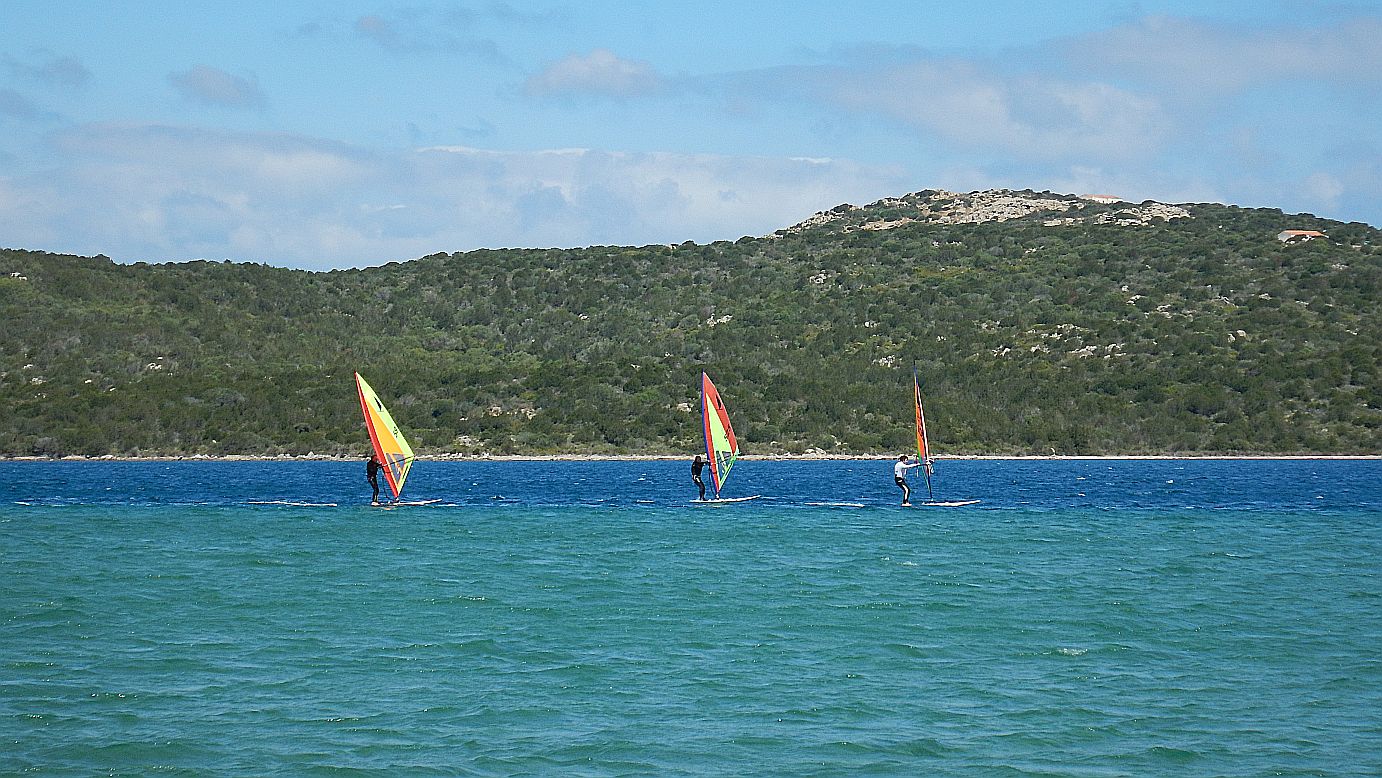 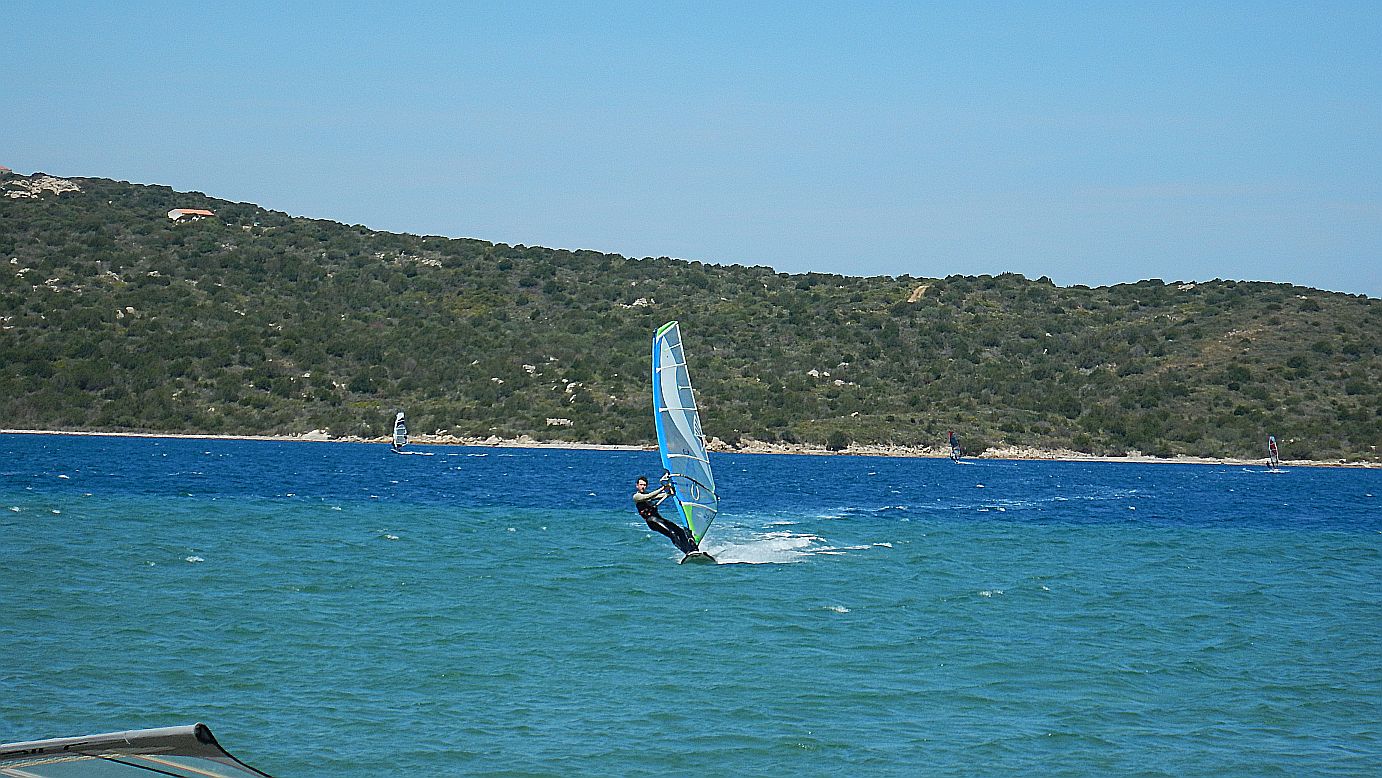 Here, I enter into the water with the Tabou 3S and the Ezzy Tiger 5.5. The quality of the wind, for most of the day, will be bad. Only gusts, more long lasting for a while, and able to make me cross the whole bay planing, but in most of the time able to let me keep the planing for no more than 100 meters. Again, I take advantage of flat water conditions to practice maneuvers, even if under these wind conditions, you get to the maneuver that you already tired for the continuous stance corrections to keep the board planing. The bay is very charming, and riding up to a few meters from the shore (windsurf school side), in a water of absolute transparency, is a great show. Nevertheless, after two hours I'm exasperated by the wind conditions, and I decide to spend the afternoon exploring the landscape and spots of the coast at South of Santa Teresa di Gallura.

In the afternoon, I head to the Marina delle Rose spot (40 minutes from Porto Pollo), which I've heard to be a very good spot which offers interesting wave conditions. The spot is, precisely, in the beach of Lu Litarroni-Naracu Nieddu. Arrived on the spot, I can only be enchanted by the scenery: a fairly wide bay with clear white sand, with the hills, covered by Mediterranean scrub, in the background. Some semi-emerging rocks, are scattered at the sides of the bay. Few tourists stroll along the beach. There will be a dozen knots from the west, and the spot is not working, but you can clearly see that conditions can be fantastic here. Absolutely to try! 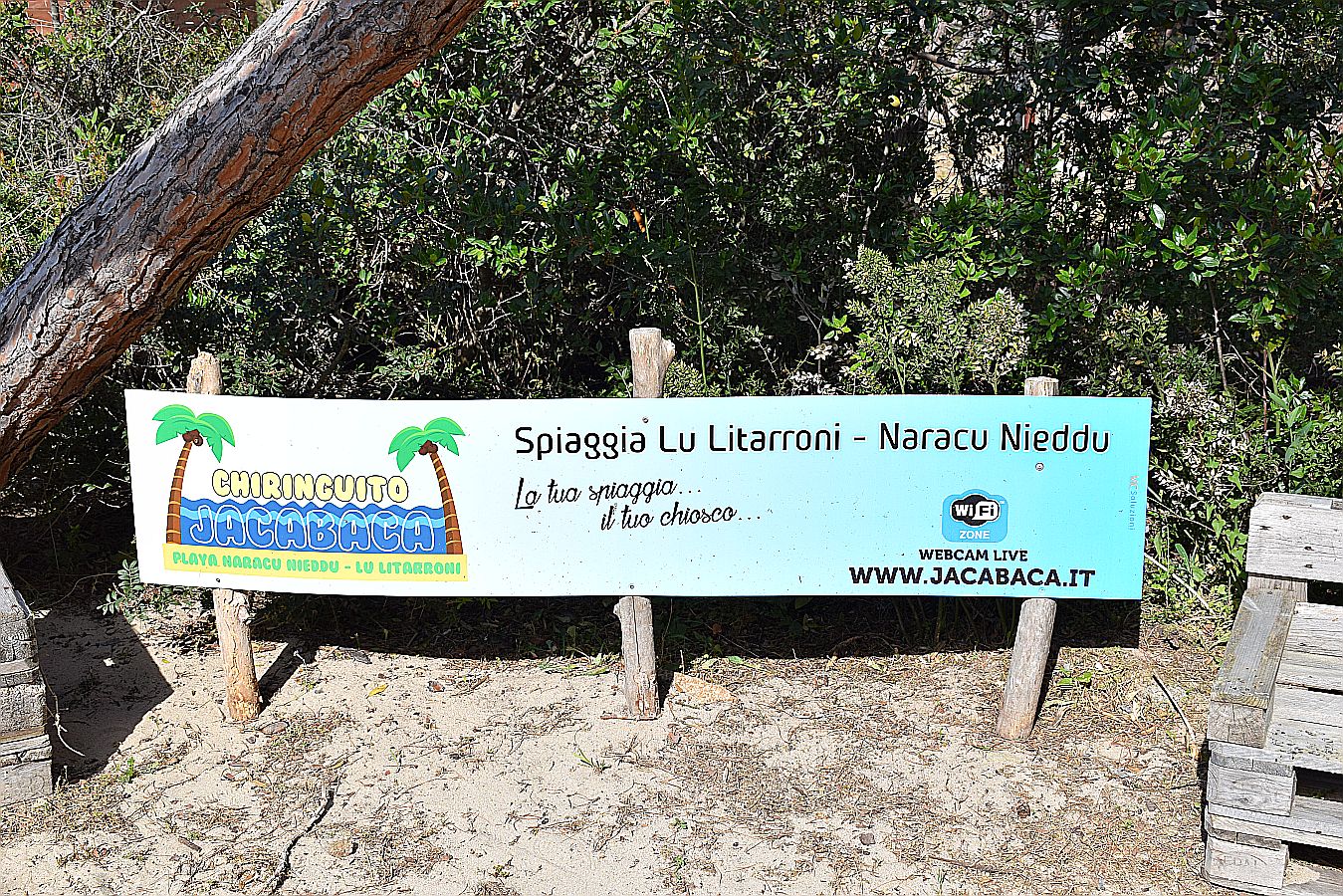 Driving back to Palau, I also stop at the famous Cala Pischina, where, last year, the Italian wave championship took place, which appears to be more challenging (narrow sandy beach, and rocks everywhere). 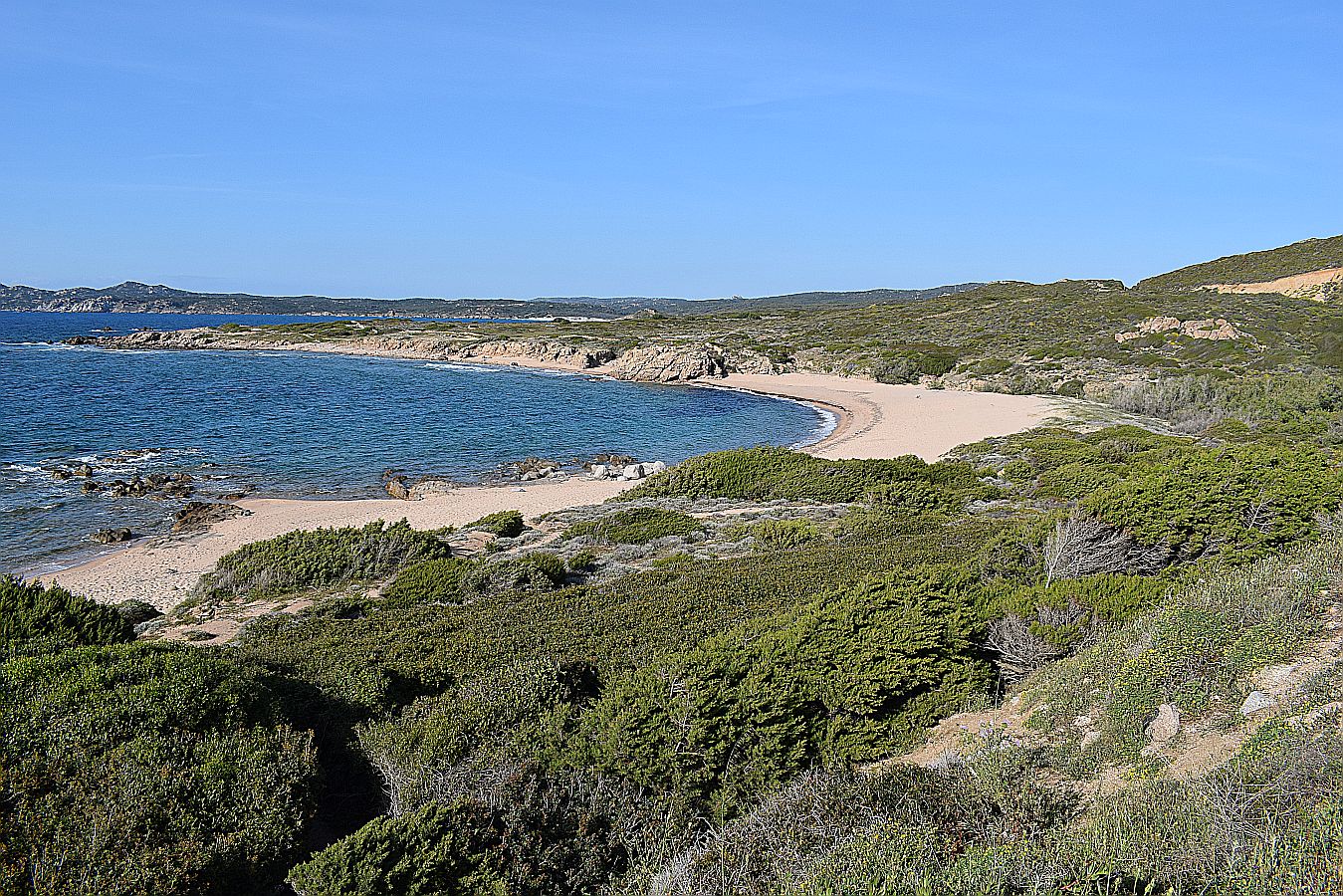 But above all, always on the way back, I am struck by the beach of Rena Majore, just north. Here again, the glimpse is magnificent. Sardinia is a crazy place, and, seeing these scenarios, you can only fall in love with Sardinia.

With 10 knots from the west, Rena Majore has a smooth, glassy, regular one meter waves. There is, however, a group of rocks at the center of the bay, which probably requires attention, while surfing. 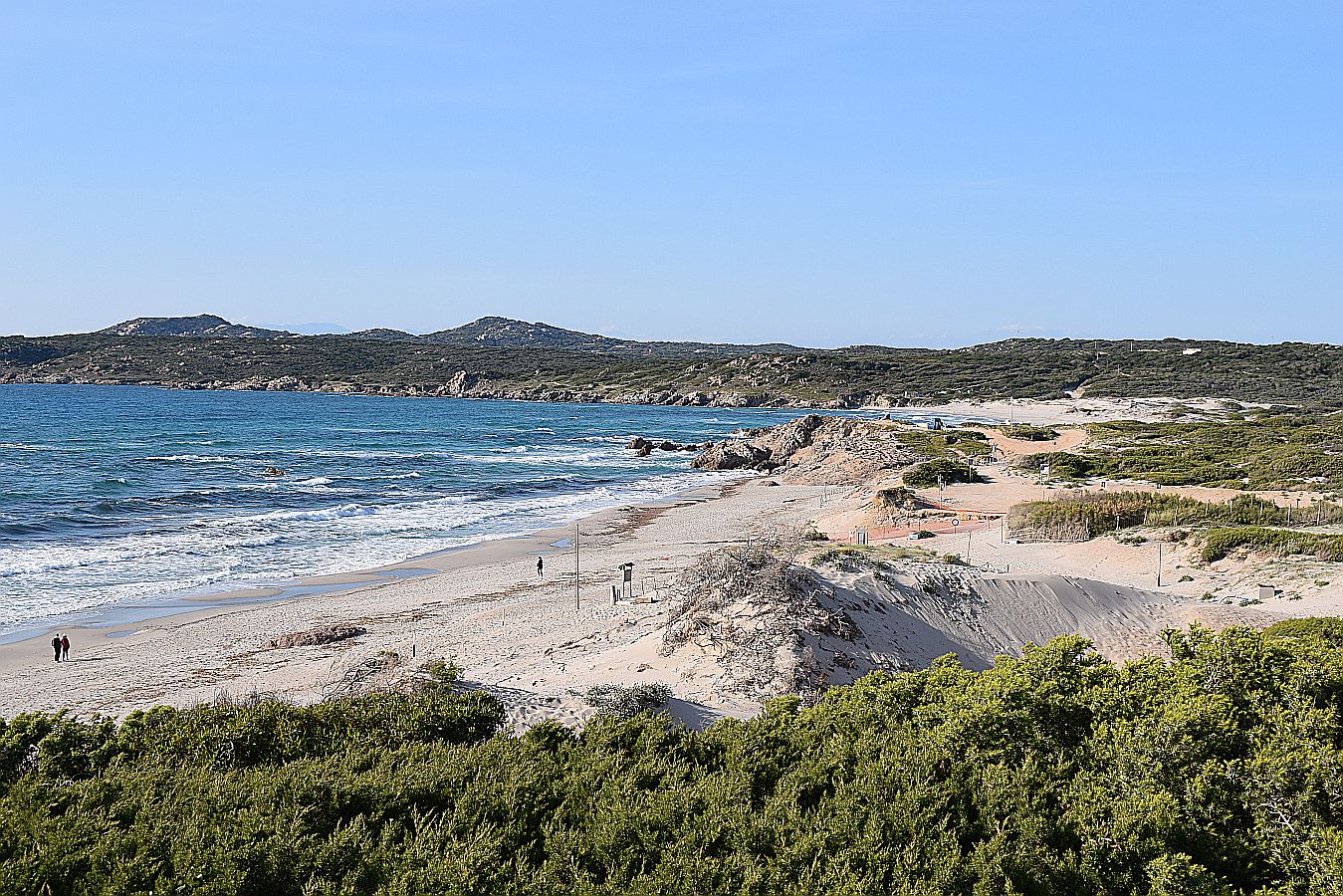 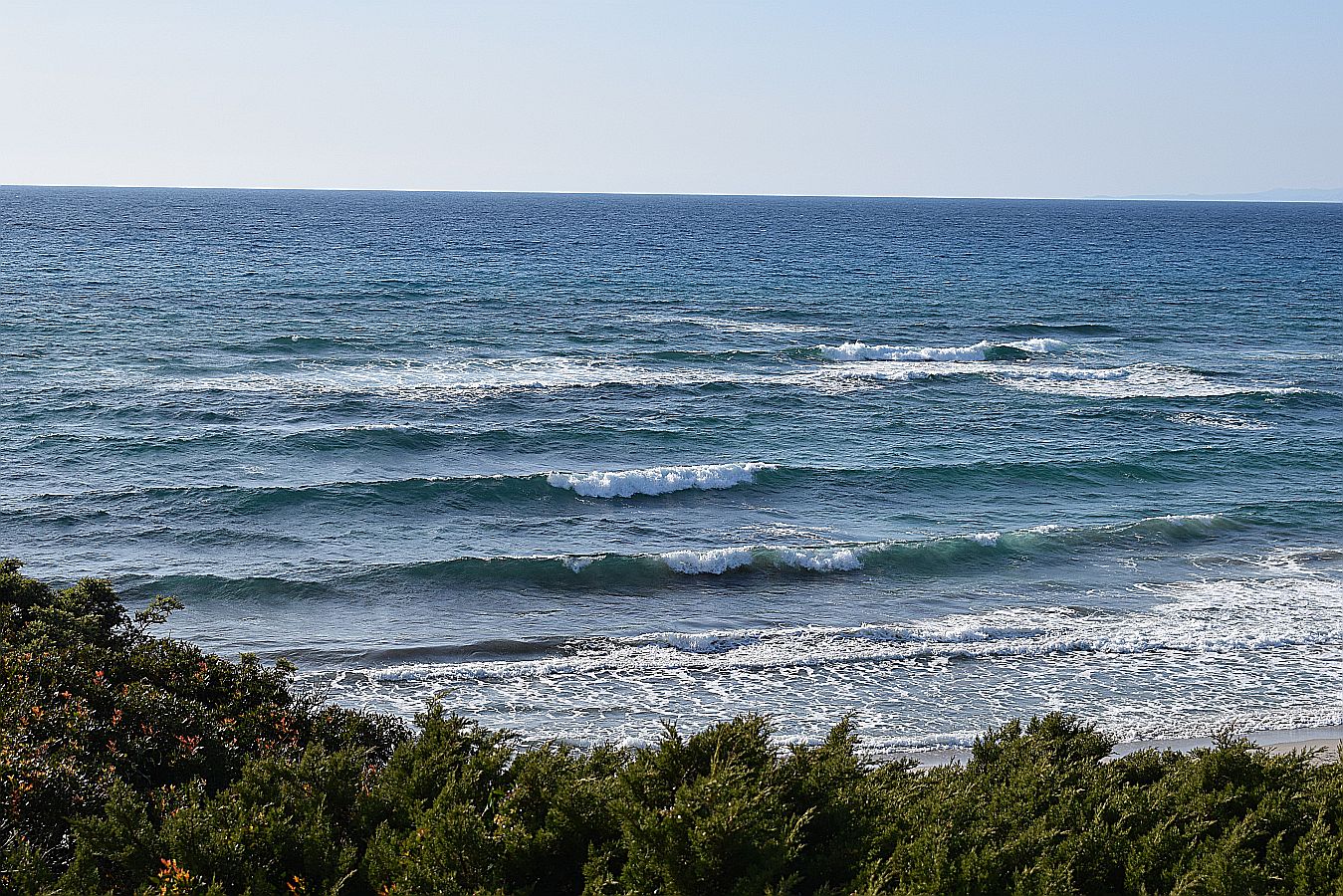 After these wonders, I return to Porto Pollo. The next day I will have a memorable session with the Sirocco in San Teodoro. But this is what I will tell you in the next episode.

The video of the sessions