Lots of guys told me that Funtana Meiga, in the Sinis Peninsula, in Sardinia, was a real playground. At the end of October, I finally got the opportunity to have two sessions in this spot, which confirmed all the best expectations.

Water surface: clean and regular waves, good for surfing, with height between 1 and 2 meters.

Wind: Mistral (slightly with a west direction), about at 20 kts.

Water surface: clean and regular waves, good for surfing, with height between 1 and 2,5 meters. 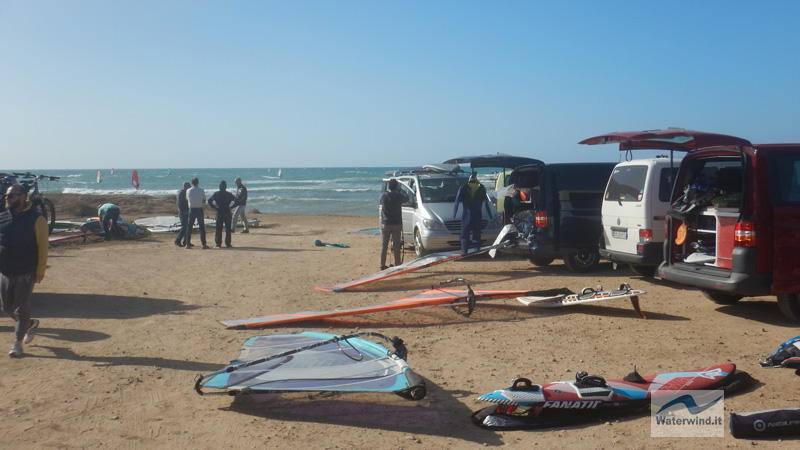 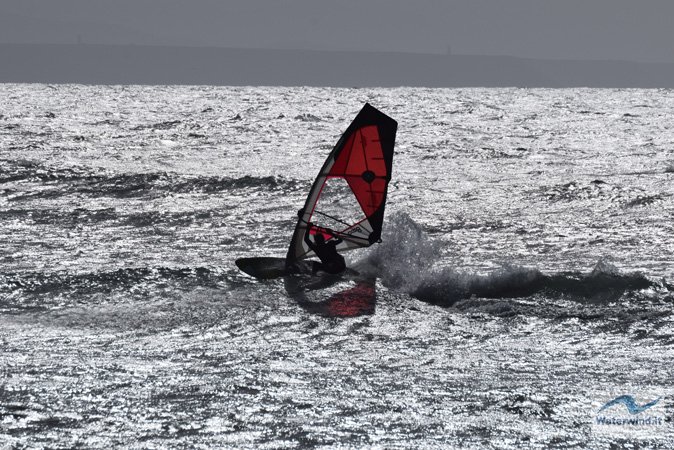 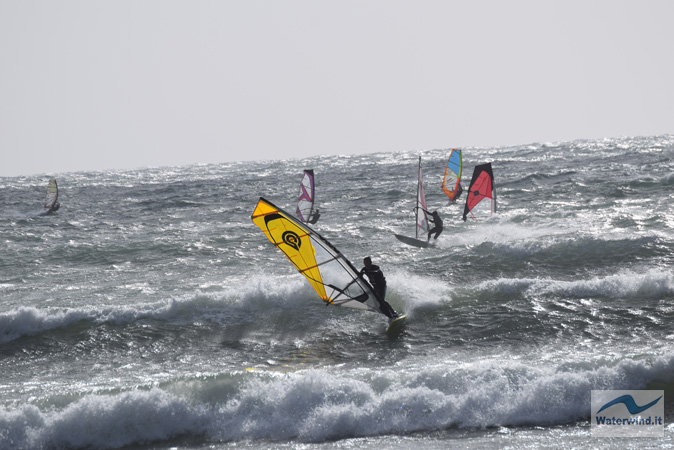 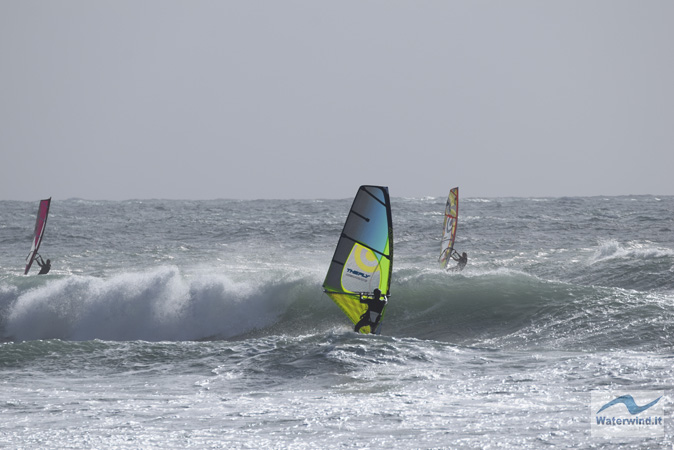 The image of the waves lip that tries to chase me, as I do the bottom, and look back, to get ready for the cutback, still reappears in my mind. Waveriding is a drug, and now this image has become my recurring dream ....

The arrival at Funtana on Sunday morning (October 29th) at 9.00 was a pleasure in itself (read the spot review here).

With my friend Andrea, we drove along the beautiful roads (during this time, with no traffic), crossing the countryside in the inland of the Sinis peninsula, and we reached the parking area, on the coastal dune that goes down to the sea, right on the spot. The atmosphere immediately seemed to me right one: the parking area was partially occupied by vans and cars of local windsurfers, but also and mostly coming from the rest of Italy (Tuscany and northern Italy, mainly), and North Europe (Germany, and Austria, mainly) as well. Sardinia, especially out of season, is still wild enough to give that wonderful "on the road" trip feeling, with chance to be in touch with majestic and powerful nature. 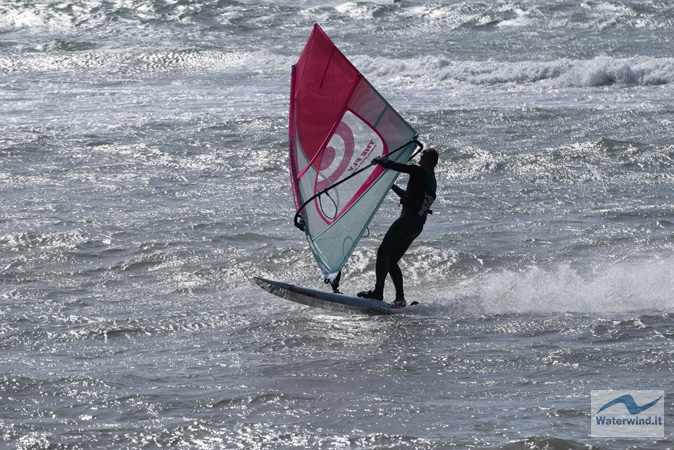 On the spot, on Sunday, we met our friends Thomas from Munich, and Sergio from Monza, who slept right on the spot (Sergio in a tent!). The first images of the spot were immediately thrilling and reassuring at the same time.

In addition to the beauty of the stretch of coastline, closed to the south by the wonderful San Giovanni Sinis beaches, a good mistral (NW wind), still not strong (but expected to increase, according forecasts), welcomed us, promising a fun day. In addition, the waves already looked pretty good: finally, not the usual messy waves of many Mediterranean spots, where you have stormy sea; There you had smooth, regular and of the right height waves, that were present in many areas of the spot. Last but not least, the warmth of the magnificent sunny day did the rest to let us feel good. In short, we entered the water without particular anxieties, wanting to test our abilities, and throwing ourselves into that God's gift ... The first riders entered at 9.30, with sails just over 5 meters. They were able to enjoy some good waves in blessed loneliness. To avoid sail changing, I preferred to wait

Once we asked to other riders about the dislocation of the semi-submerged rocks to avoid near the spot shore, we started our first Sunday session, entering the water from the only entry point, near the parking lot, where, starting from the right (starboard) tack with the side/side-sideon wind, there is no risk of bumping into some rocks (read the detailed report of the spot). Once in the water, the carousel started .....

I entered the water with my 4.7, trimmed powerful (little downhaul and outhaul), and with the Fanatic Triwave, with which I am getting good confidence. The feeling with the equipment soon seemed to me right, having the feeling of being properly powered, and with a board suited to the conditions.

Just going out, the first steep breaking waves made it easy to jump, thanks also to the side/sideon wind direction.

In the first rides, since I didn't know the spot, I tried to look at the others. Offshore, the sea appeared immediately quite rough, with classical big waves, rarely breaking, of 2/3 meters, or so. In the port tack ride, approaching the coast, you entered the area where the waves rose before they began to break, about 100 meters from the shore. This is the erogenous zone ..... where you want to return continually to ride the waves (therefore, short rides going out, the less you need to gain again water you lost in waveriding).

On the first day, in trying to ride the waves, I had the same difficulties that I also had at Coudouliere a few weeks ago, with the wave that often passed under my board when I tried to start riding it. Anyway, maybe more by accident, I managed to get some waves right away, sliding on its forehead and taking more and more speed. Very nice also the feeling of being on the same wave with other windsurfers, both for the fascination of the image, and because it was nice to see the evolutions of the better ones. In this regard, it is immediately important, given the presence of not a few riders in the water (but nothing impossible), adhere to the rules of precedence of waveriding, to avoid too close meetings..... My first real bottom turns were still very wide and not too aggressive, and the cut backs as well timid; but the experience of the first day, has soon showed to be useful for me, and the second day things have gone better from this point of view. 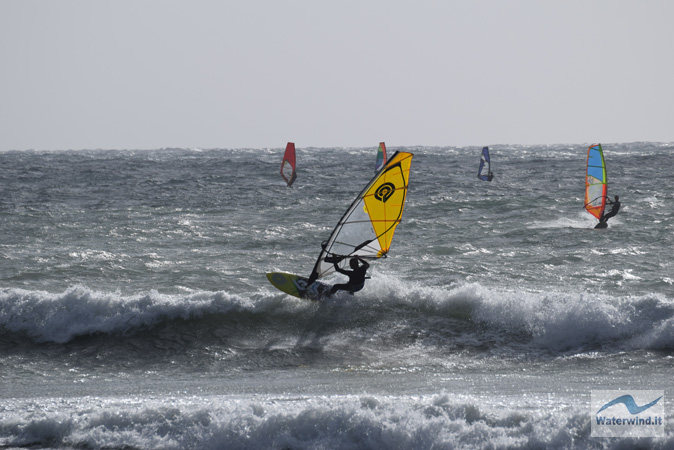 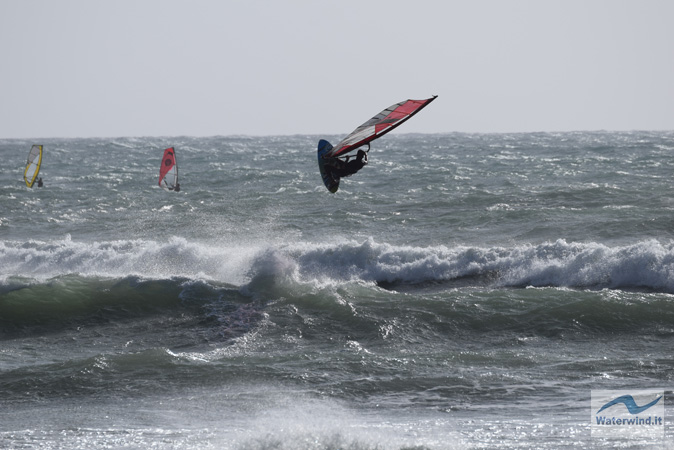 Whether surfing, or not .... the waves, about 50 meters from the shore, it is better to jibe or tack, to avoid getting too close to the rocky sea bottom near the coastline, in case of fall. The good thing about Funtana Meiga is that the spot is basically safe, as in the case of wipe out, the waves coming to the beach have lost power, and they are not capable of producing significant damages. On Sunday, I went into the water lots of times, and had stayed in it for about 3 hours. In the central part of the session, as the wind had reinforced, I tried to depower the sail, but I must say that the Ezzy Elite with too much outhaul sheeted seemed to me a bit nervous, and I did not like it much. So I left it with a loose leech, but I eased quite a bit the outhaul, in the final part of my session.

After setting up the equipment after the session, we decided to go and explore the other Sinis spots (in the morning, we had visited Torregrande). Capo Mannu's visit was electrifying, and it was exciting to see the session of Roberto Festa, another local high-level surfer (see article on Cape Mannu). 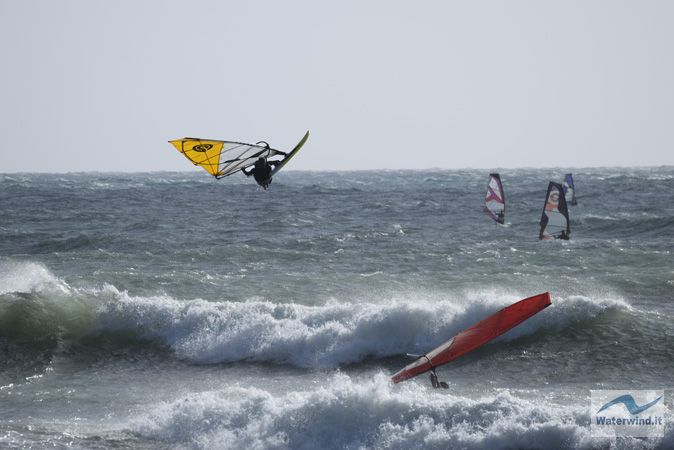 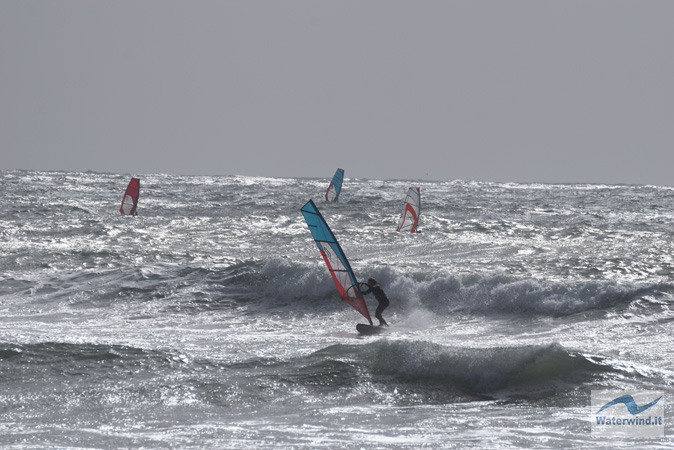 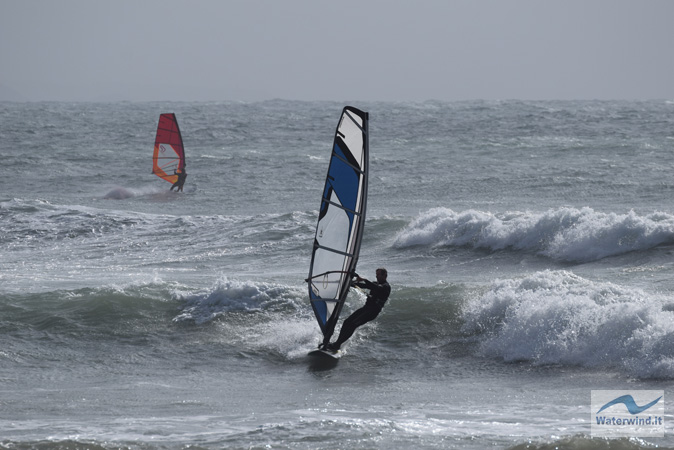 On Monday, October 30, forecasts promised a lighter wind, but bigger waves. And so it was (Windy.com is showing to be more and more reliable). I chose to keep a small, agile board under my feet, but to have a powerful engine. I rigged a 5.5, with a somewhat loose leech. This choice, too, proved to be good, and allowed me to stay in the water for about two hours. Only in the final part of the session, the sail was a little big. On Monday the wind was slightly more oriented from west (and therefore a bit onshore, especially when riding offshore), unsatisfying the finest riders. Frankly, the chance to play again with those wonderful waves, made the session appear to me a wonderful confirmation of how lustful can be Funtana Meiga.

On Monday my waveriding went much better. The waves, being bigger, were more readable to me, but I also understood two fundamental things. First of all, when you enter the waves area, to be able to catch them when they get up, you have to go slow, and you do not have to plan fast. You have to read the water surface to see the waves that are forming. For this reason, in the best wave spots, experienced riders do not like the strong wind. The second important thing, which has allowed me to finally take more waves, is that you have to start accelerating (maybe pumping a bit, with the sail) as soon as a wave has passed under your board and you are in the wave trough before the next, because waves are much faster than you believe. This allowed me to take a lot more waves on Monday, and to perform several bottom turns, starting to set up the technique. For the cutback, there is still a lot of work to do .... The exit from the bottom was still not fast enough, and that often caused to reach the lip of the wave too slow, so that I stopped on it, becoming prey of the breaking wave, and getting a good set of wipes out. The onshore wind direction, from this point of view, certainly did not help me on Monday. 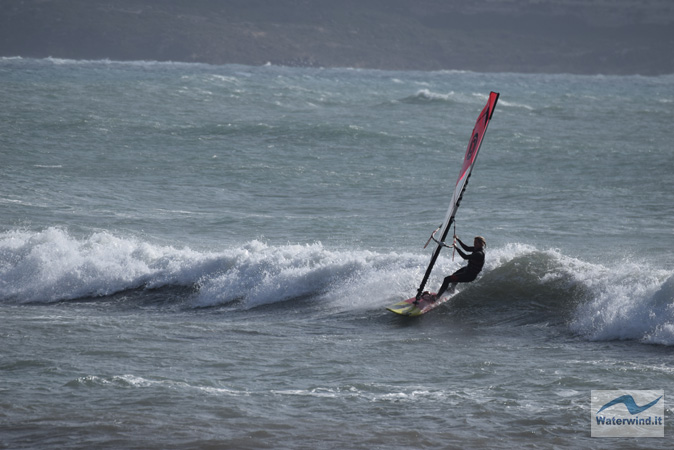 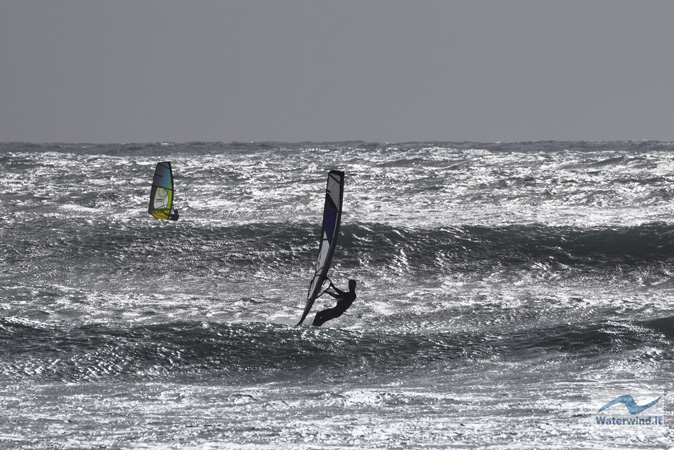 I also tried the experience of going to rocks .... But when you do waveriding, you do not have to be afraid of it, 'cause it's part of the game, and sometimes you have to run the risk. For the yearning of surfing the waves as much as I could, I did the jibe too close to the shore, but just after maneuvering, I immediately faced a breaking wave that made me fall .... The next one brought me and my equipment almost to the shore .... So I found myself walking on the uneven rocky plateau. Anyway, as I said, the waves are not bad there, and it's just having the patience to do the waterstart to go offshore again. The main concern, frankly, was to put my feet on a sea urchin .... Fortunately, I had my surf shoes.

Finally, Funtana Meiga came to my heart, and along with Gruissan, La Coudouliere, and San Teodoro, I put it in my spots collection where the session quality is assured.

The video of Sunday and Monday sessions

A video of a very good freestyler, that was at Funtana on those days