S'Ena 'e Sa Chitta is a very interesting spot, in the north-eastern part of Sardinia, not far from Orosei. It can offer beautiful windsurfing sessions with the Tramontana wind, which raises good quality waves. In this article, we provide you with a detailed review of the spot.

(Article Podcast available for Supporter inside the text)

The east coast of Sardinia is not as windy as the west coast of the island, which benefits from frequent winds blowing from the north and west. However, periodically, the winds from the North North East and the South South East manage to blow over this area as well, letting the spots, mainly in the north and south of this coast, work.

After having carried out beautiful windsurfing sessions several times in the spots of La Cinta (San Teodoro -  read review ), and Murta Maria ( read review ), we recently had the opportunity to try the spot of S'Ena 'e Sa Chitta, a little further south, in the Orosei area, which turned out to be a very fun wave spot, with waves of good quality.

Reaching the spot is quite simple and comfortable. Both coming from the North and the South (the spot is about half an hour by car from Orosei, and less than 1 hour from Olbia), take the Route Orientale Sarda (SS 125), up to the locality of S'Ena 'e Sa Chitta . Once reached the village, follow via delle Palme, until the road, near the beach, becomes a dirt road, and, after about 50 meters, reaches a lawn adjacent to the exit point, where you can park comfortably (see our map below). Otherwise, you can also park along Via delle Palme, if the parking on the lawn is full (rare circumstance), or impractical (possibly, after heavy rains). These considerations refer to the conditions of the spot outside the summer season. This point is also very convenient for rigging (on the grass), and quite sheltered from the winds from the North and North East. On the occasion of our session here, there were many vans of windsurfers, including foreign guys, also positioned here for camping.

Entering the water from the parking lot, with winds from the North, is really easy and convenient. 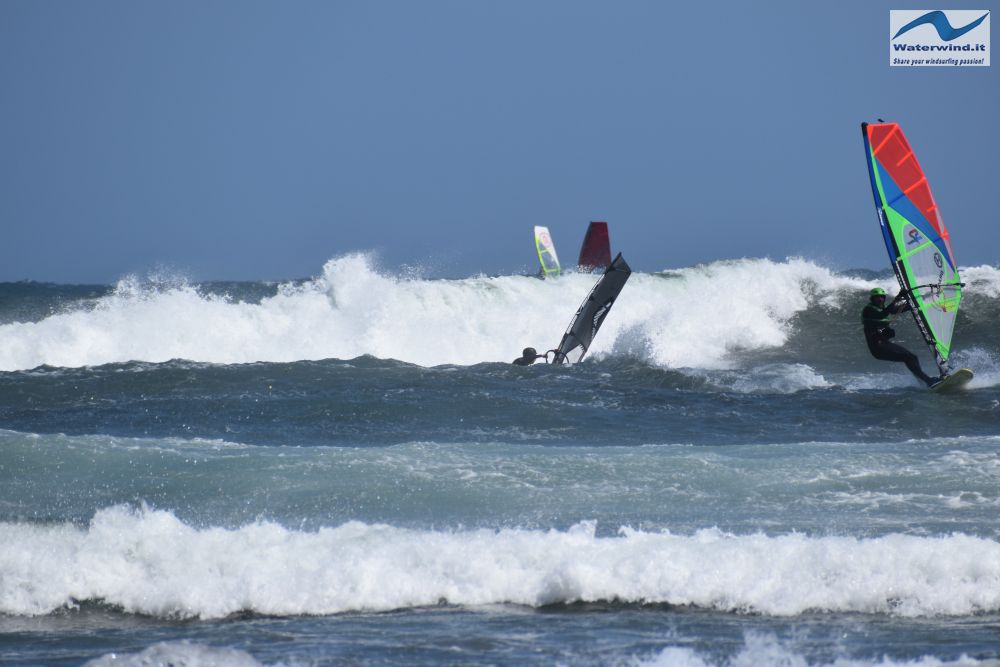 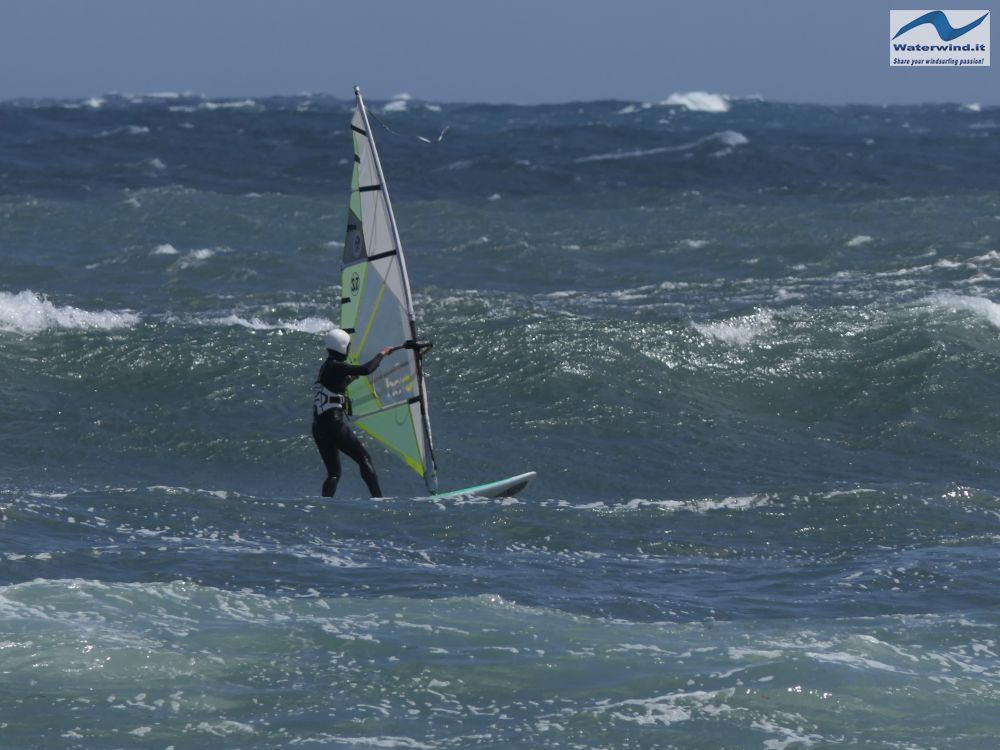 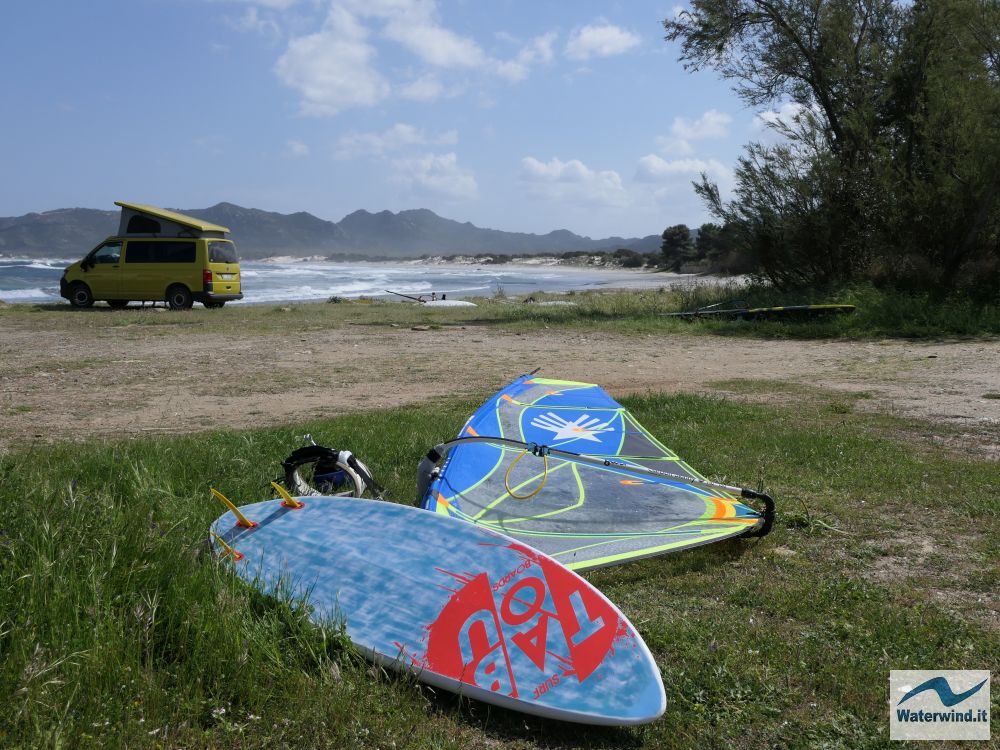 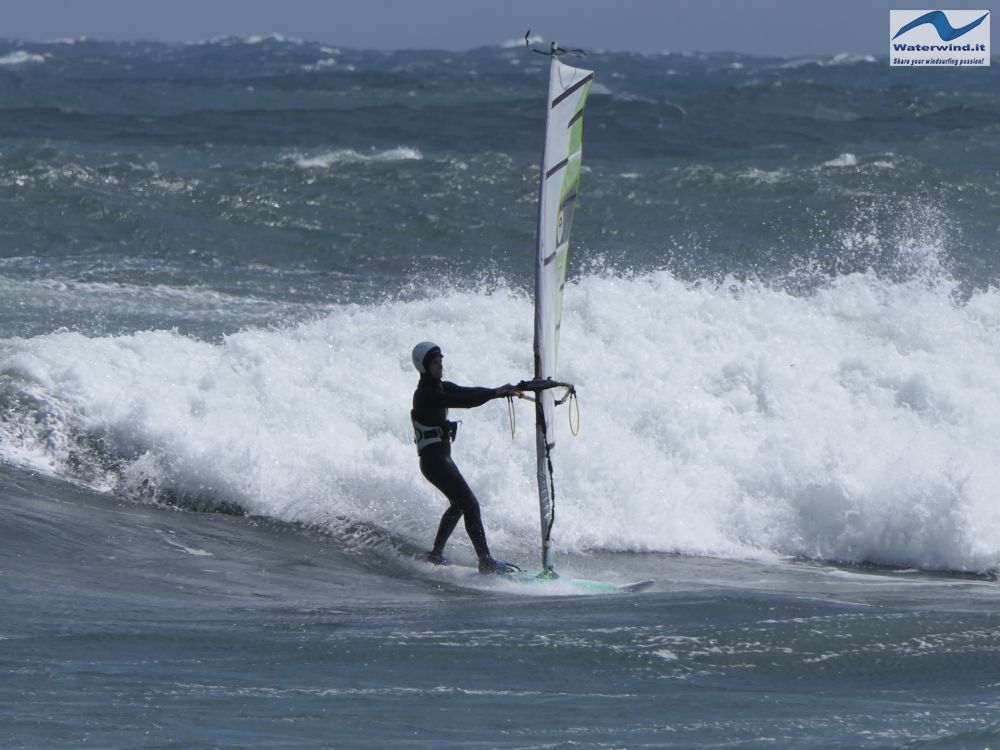 The spot also works with NNE wind, while the Grecale (NE) enters rather side on / on, therefore with less interesting direction over the waves, and basically allows only bump and jump sessions.

With Scirocco wind (SE), you can exit from the same point described above, or you can take advantage of the southern part of the bay (Capo Comino Beach, or Dunes beach - see again our map above), where the SE wind blows less disturbed, and where , in the case of heavy swells from the South, Isola Rossa could order the waves and make them interesting to ride. This area of ​​the bay, especially in summer conditions, and in less strong winds (15-20 knots), is also suitable for freeriding / slalom sessions, in a breathtaking natural setting.

In the area, we also point out, as alternative spots, Siniscola, Posada, La Caletta, a little further north, and Cala Liberotto (also excellent for surfing, with swell from South / South-East), a little further South. As regards the latter, in addition to the wonderful natural scenery (but in Sardinia it is difficult to windsurf in unpleasant places ...), we point out that, with the north wind (side off), the sea generally flattens out, and the spot is suitable for freestyle / freeriding sessions, but not for the waveriding.

In winter, S'Ena 'e Sa Chitta offers no refreshment points near the spot. In summer, you can take advantage of some kiosks at the beach, or the bars of the establishments.

Click here, for a slidegallery of a session in the spot.

A video taken in the spot