A typical winter day of Foehn wind, at Abbadia Lariana, Como Lake: strong and violent wind, but enjoyable, anyway. And with a special guest: Yentel Caers, B-16! 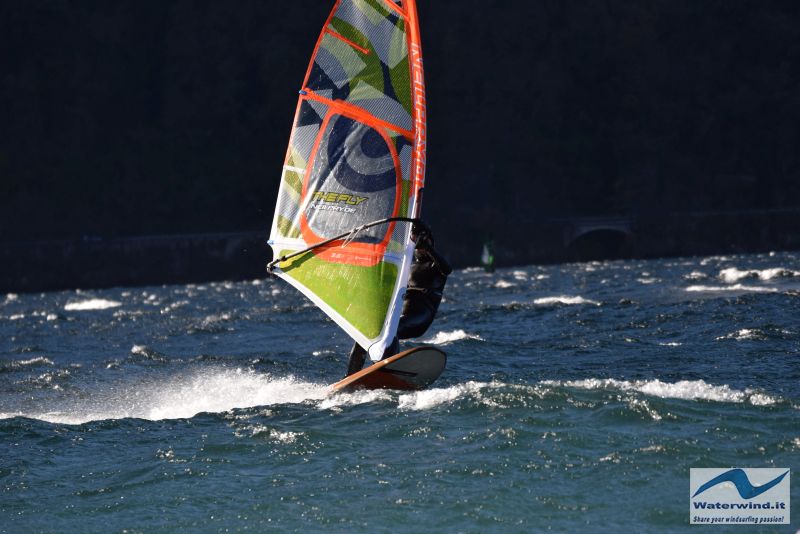 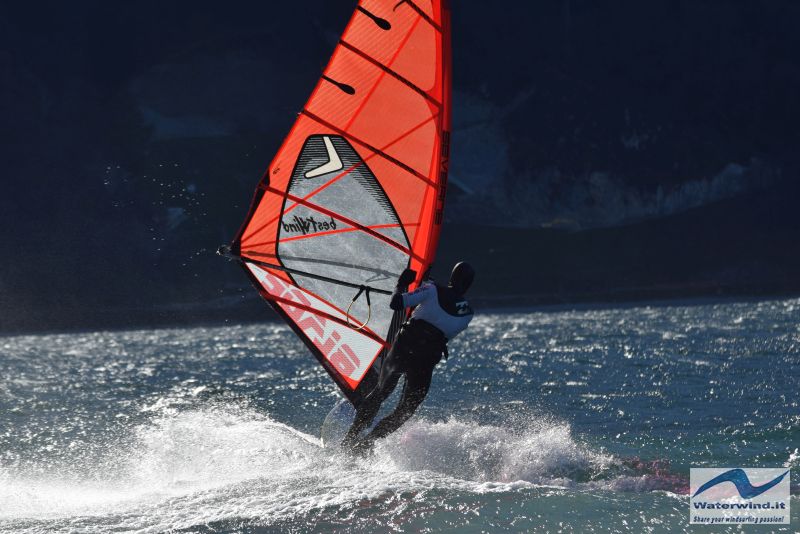 When forecasts predict foehn wind over Como lake, you never know what to expect .....

Actually, this time, more than a foehn, it was an arctic flow blowing from North Europe, which let cold polar air begin to enter over Italy. Anyway, Abbadia Lariana, on these occasions, always turns out to be a great spot, with the ability to rig and dress yourself, sheltered from the wind, and with a quite warm sun (about 12 °C degrees).

Many friends were on the spot.

When I arrived at about 10.00 at Abbadia, the wind was already serious, with some bursts that nebulized the water. With the anemometer, at the beach, I measured 30 average knots, and 37 on bursts (but in the water, surely on the bursts it reached 40).

We waited a bit to rig the sail, to check for a possible drop. Meanwhile, I prepared the board. I had to try out a "new" Fanatic Quad 87 2013, taken at a cheap price, first of all, to understand the differences compared to Fanatic Triwave 86 2013, which I already own. 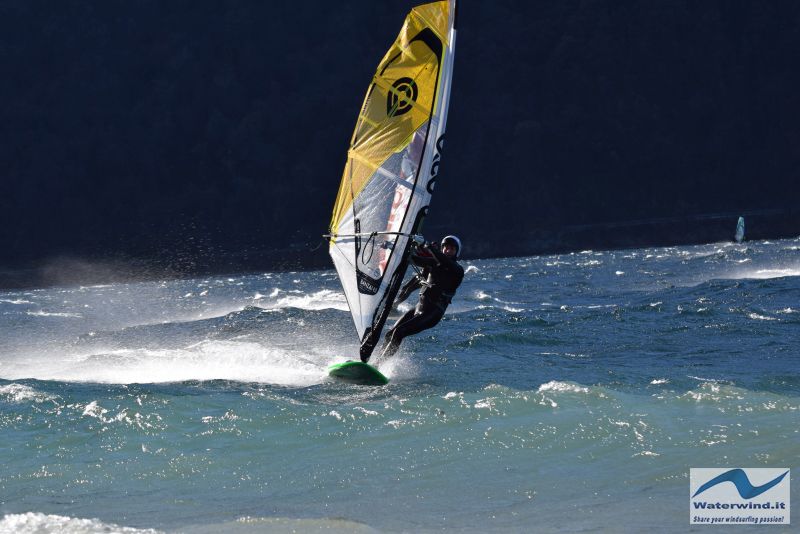 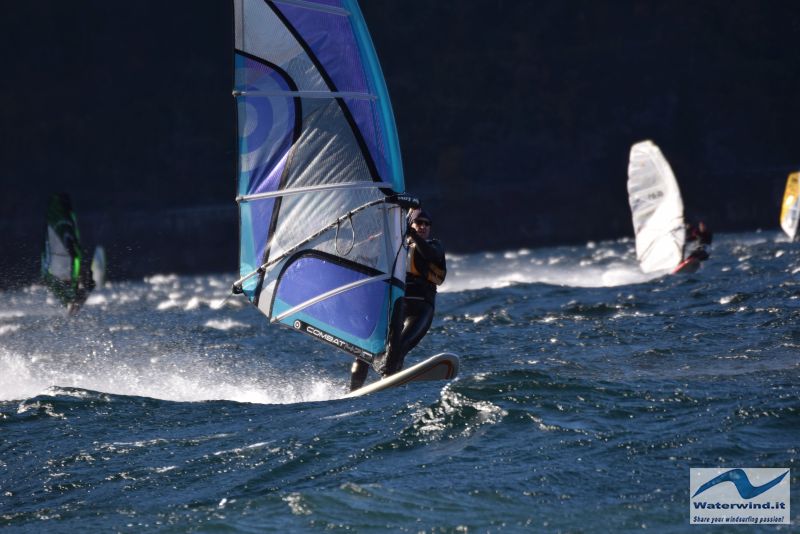 In all, I did three sessions of about 45 minutes, in the water. The first was the least funny, 'cause the wind was too unstable. The second and the third ones were funny, at least for the first half hour, with the wind well spreaded over the spot, and right for the 3.7. I lked the Quad board. It turned out to be a board that manages well the strong wind, and that faces without problems chops at high speed. Easier in tacking, compared to the triwave, for the higher ablility to keep planing while entering into the wind, and for the shape with the greater width in the bow (although, the board is shorter). In jibes, it turns in a tighter and more radical way, compared to the triwave. Fanatic confirms an excellent brand for windsurf boards (and its shaper Sebastian Wenzel a very clever designer). Obviously, the test is not fully meaningful, and I will finish it, as soon as possible, with a series of sea waverinding sessions. Soon, an in-depth comparison of the two boards, here on Waterwind.it.

During the three sessions, I always had to get out of the water at some point, mainly for cold at my hands. Despite the open palm mittens (which have so far proved to be the most effective system), at a certain point, I only felt 8 fingers .... 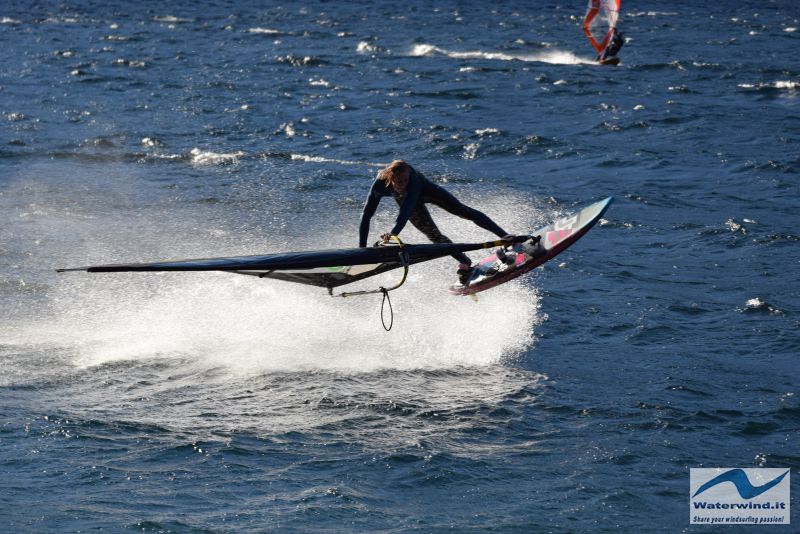 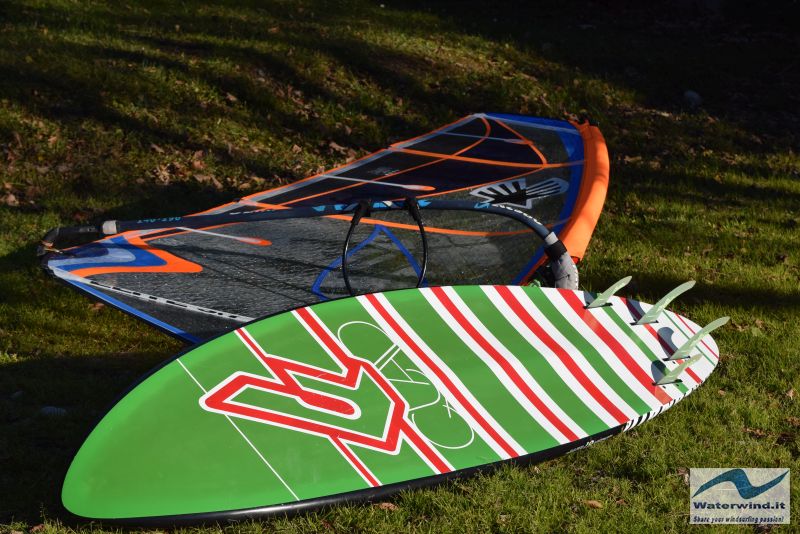 Suddenly, while I was watching other riders in the water with friends, we noticed a very good guy who made something like double speed loop .... We found out then that he was B-16, Yentel Caers (see photos), who had fun with us, and who defined conditions as "challenging". Unfortunately, Yentel, then, broke the mast (see slidegallery), and caught a bit of cold in the water to return.

Now let's see if we can migrate to warmer waters .....

A short movie, which shows conditions of the day.

The video of Yentel's session

Another video of the day