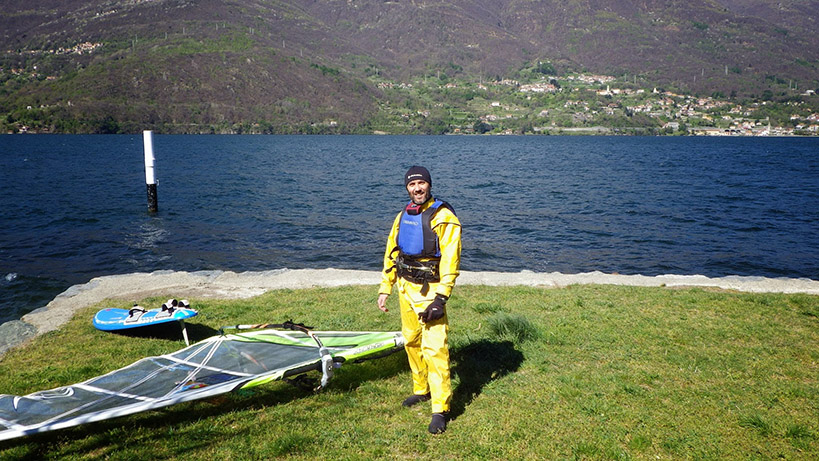 The most popular exit point (see map below) is near the landing stage of Lake Como Company Ferry Boat, on the lakefront where you have a ladder to get into water just north of the ferry stop.

It should be said immediately that when the lake level is high, the lower steps are submerged in water, and they may be slippery . So, it is good to be careful , to avoid damaging your equipment and your head ....

On the other hand, the spot is very comfortable to assemble your equipment (nice lawn by the lake and near the ladder) , and to park (parking lot next to the lawn, free weekday except in July and August , and free also on winter season).

You can also get into water at the beach at the mouth of Varrone River, but it is generally not a suitable place with winds from the north, here particularly disturbed, and where you would have to discuss with the kiters, who crowd the area with winds from the South.

Finally, with the North wind you can get into water at the beach at the Northern end of Dervio lakefront, paying attention to the metal pier immediately to the west of the beach. Along the lakefront there are several bars, and restaurants; and also public toilets in the playground by the lake .

In correspondence to Dervio the Como lake narrows, and the mountains fall into the lake with steep walls favouring the canalizing of the wind. However , you have also elements that make the morphology of the site a little more complicated, the first of which is the Varrone Valley, which leads to the lake, right in Dervio , and which has , roughly , an East-West orientation .

The best condition in this spot  is when the wind comes exactly from the North, but it is rare. In this condition, you go out and you come back exactly abeam.

Sometimes, the wind comes from north-west, and that is what occurs especially in the early hours when the North wind starts to blow (to predict when you have conditions that favour winds from the north due to low pressures, read the article about the spot of Abbadia Lariana). In such cases, wind quality is quite bad, as it falls directly on the lake from the mountains that close the lake to the West, alternating violent gusts and very low wind. Not much enjoyable and recommendable. In this case, it is better to ride in Colico, or, if the North wind is not weak, better ride in the southern part of the Como lake ( Abbadia Lariana or Valmadrera ) .

Often, the north wind due to low pressures comes from North East. Even in this case, it may be more or less gusty, because disturbed by the mountains (Legnone and Legnoncino) that enclose the upper lake to the east. In such conditions, often Cremia, or Domaso, enjoy a more stable wind. In such circumstances,  taking your session in Dervio , it is better to ride upwind (i.e. in the lake area at North of Dervio), as in this part of the lake the wind is more spreaded, and with a North-South direction, while moving to the area just south of the ferry-boat stop, it suffers the effect of Varrone Valley, from which gusty wind comes from the east; this gusty wind adds up to the wind coming from North in the center of the lake, producing a resulting wind from North-East , that is complicated to manage for non-experts . In fact , besides being much more unstable , it can force you to go downwind to keep speed during wind holes, while you return from the center of the lake towards Dervio. The orientation of the wind, in addition to its instability, makes surfers, not able to go as much upwind as possible, to loose lot of water, ending to the beach at the mouth of Varrone River . Here you have a red and white pole that is good to keep as a reference when you are in the center of the lake. Beyond this beach it is not good to go, because here the lake gets larger, the coast develops with orientation West / East , and you are forced to sail in a direction exactly opposite to the prevailing wind (which here actually becomes completely unstable as direction and intensity) to reach the shore.

The best North winds can reach 30 knots (at least on gusts ) , and , especially in winter , also 40 kts, causing to spray water on the lake.

If you want to realize of how it is to ride in Dervio with North wind, read the report of the session we had on the 16th of march 2014. 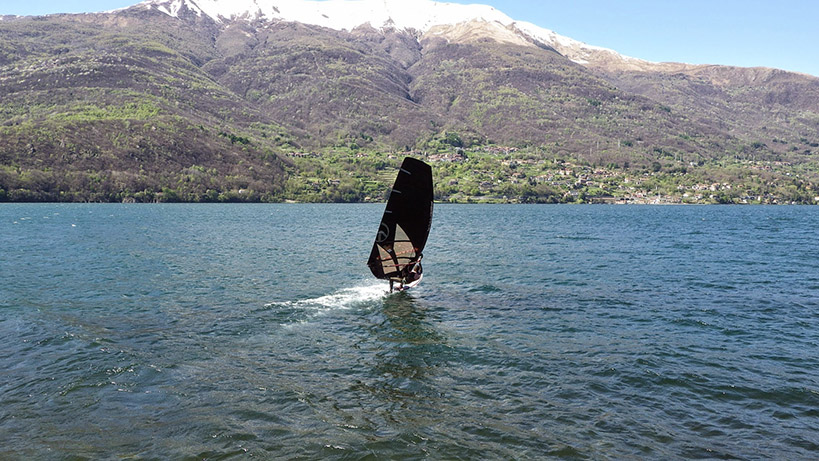 Consider that the the spot also works fine with thermic South wind, the so called Breva, rising from the the early afternoon, which is generally less strong than foehn, unless it is powered by South East wind blowing over the plains at south of the lake. Watch a slidegallery taken at the spot with goode Breva wind.

Read the report of a nice session at Dervio with foehn wind.