Unfortunately, an ear infection prevented me from taking part, but judging from the reports and images that I have received, Wednesday 22, and Thursday 23, October, 2014 Como Lake was the scene of two days of wind that will go down in history. Winds from the north, that reached peaks between 40 and 50 knots, swept especially the Lecco branch of the lake. 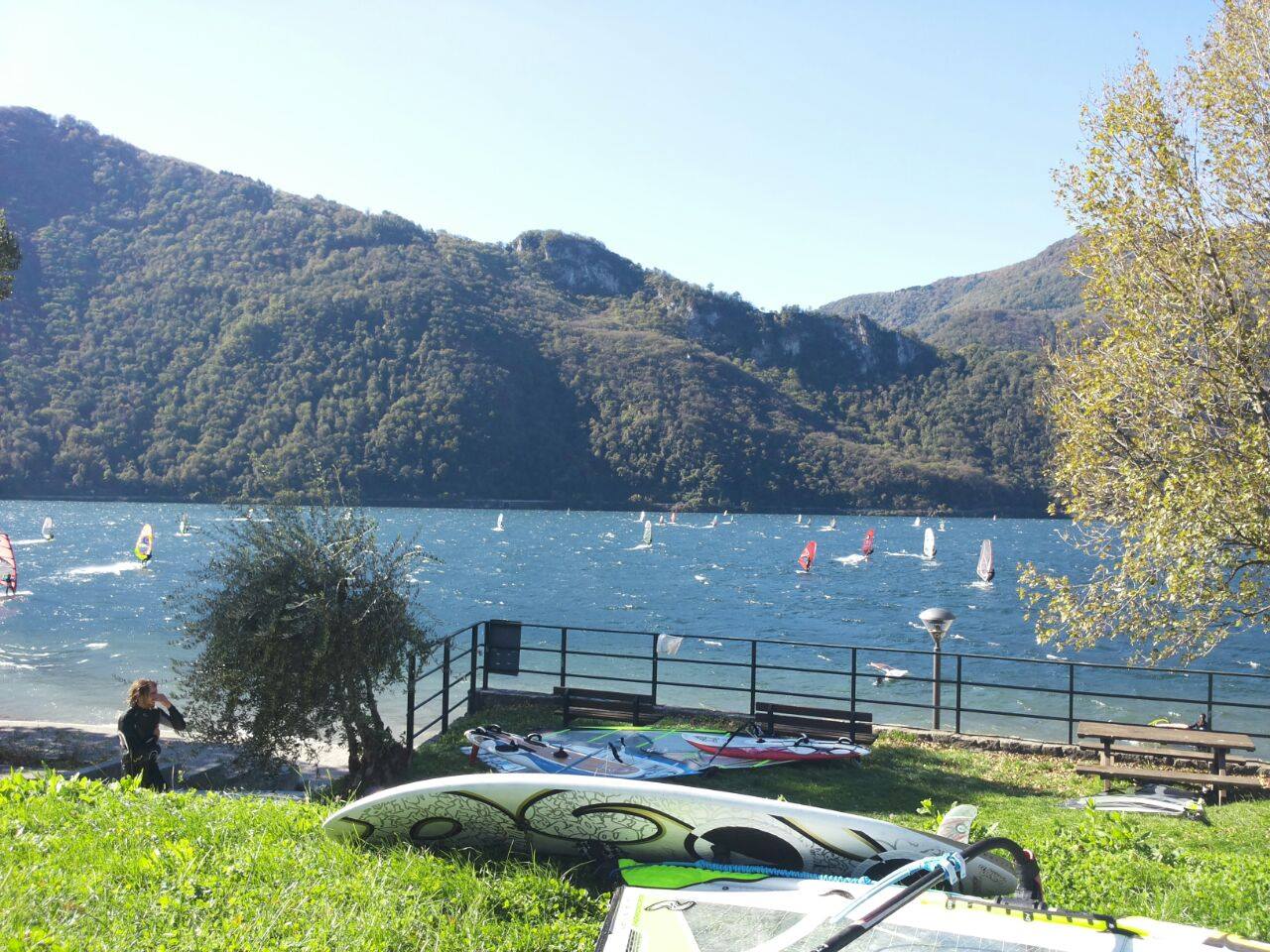 We point out that the anemometer at Valmadrera (near Lecco) noted gusts of 77.2 km/h, on Wednesday, and even up to 98.2 km/h, on Thursday. The wind in these conditions came to spray water on the surface of the lake coming to partially obstruct visibility. Even in the mid-lake (Bellagio - Cadenabbia where the lake is very open), ones who went out met epic conditions, rarely seen before, with shorebreak worthy of the sea, wind well spread, to deal with sails from 3.5 square meters, waves offshore that concealed part of the shore, when you were in between them. Some riders went out in Lake Garlate, and witnessed the formation of eddies of wind.

In Northern part of the Lake (Dervio - Cremia), however, the conditions were more "quiet" (Wednesday afternoon). Wind entered later here, and it was manageable with 4.7 sails. On Thursday, instead, incredible conditions also in Northern branch of the lake (Cremia, Dervio), with more than 40 knots, as witnessed by the video of the filmed by Adolfo, of windsurfcremia.it. 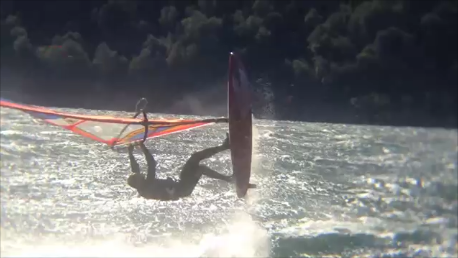 Some broken sails, a few light wounds also for riders, some survivors recovered, but no one missing .....

Thanks to the accounts that we receivde, we give everyone the opportunity to relive the excitement of the sessions.

"Went out (Wednesday) at Oliveto Lario, 4.7 full, 4.2 was more convienient, but it was nice and steady. After 16, wind partially dropped and remained only in Valma but very gusty. Cold air, warm water"

"Hello Fabio! This morning (Wednesday) I was at Abbadia with Michele. Until 12.00, it was not bad, with the smaller sail that I have (a 5.5) was fine. Then wind began to increase, at times it was really for 4 mq sails! a little gusty but nothing too bad!"

I first went out in Valmadrera at 7.30 with 5 mq sails and 73 liters board. After a ride I broke my sails: I replaced it with a 4 mq sails.
After an hour the wind went crazy, unthinkable to stay out: everything flying around, boards including.
At 14:30 I went to Abbadia Lariana with a 4 mq sails and 73 liters board: my sail was a bit too big, but it was beautiful, and after a couple of rides there I got the feeling. Waves rather high (for a lake ...) and strong winds have allowed me to practice jumping (some quite high, others ended disastrously;-). I stayed out until 17:30

Today (thursday) was crazy. I came out, and soon came back, and disassembled: for someone like me a 3 mq sails was good (and maybe it was even too much). High waves. Only the best riders of the lake were out.
Two castaways, then recovered.

Overall, Wednesday splendid, Thursday nice in other ways ... of course, I would have preferred me to be out another hour ..."

Here, links to pictures and videos of riders who were there.

Abbadia Lariana, 22 ottobre 2014 (Video by WCV - Valmadrera)
Save
Cookies user preferences
We use cookies to ensure you to get the best experience on our website. If you decline the use of cookies, this website may not function as expected.
Accept all
Decline all
Read more
Marketing
Set of techniques which have for object the commercial strategy and in particular the market study.
DoubleClick/Google Marketing
Accept
Decline
Facebook
Accept
Decline
Quantcast
Accept
Decline
Analytics
Tools used to analyze the data to measure the effectiveness of a website and to understand how it works.
Google Analytics
Accept
Decline
Functional
Tools used to give you more features when navigating on the website, this can include social sharing.
AddThis
Accept
Decline
Stop copying the copyrighted material!