When the first mists, and first grey autumn atmospheres begin to take over the Po valley, what's better than a nice trip to Liguria to enjoy the wind, and the clear light of a beautiful sunny day? If on the spot you also happen to meet, by chance, your friends, and you can enjoy a pleasant session with them, the alchemy is perfect! 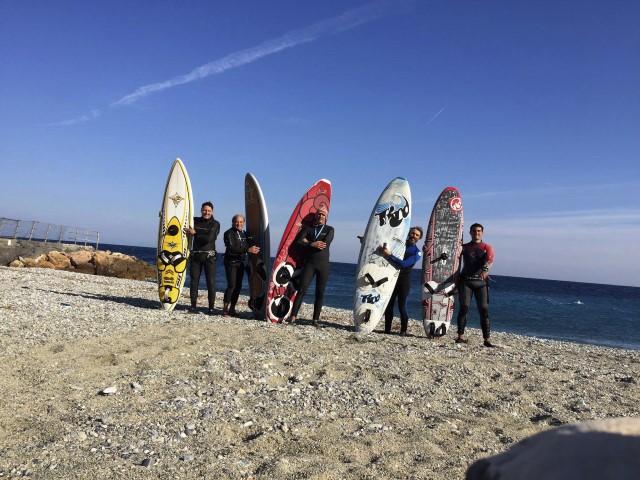 We went out from Mediterranee bath facilities. In the morning, we had also made a visit to the Lega Navale spot (at the end of Spotorno), where the wind, however, near the shore was a bit unstable (while offshore was really good). 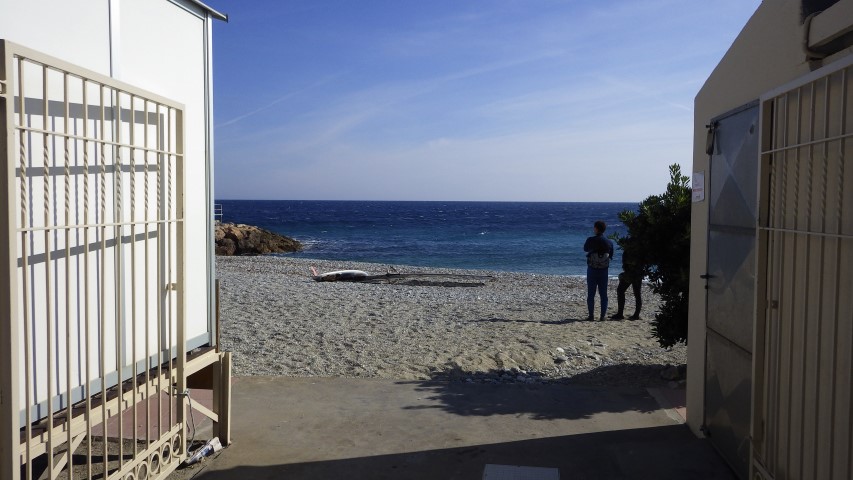 When we arrived to the Mediterranee spot, in addition to some local riders, we had a very pleasant meeting: Rolando (just returned the day before from his usual diving in Egypt), Roberto, and Davide, friends and riders of Como lake .... 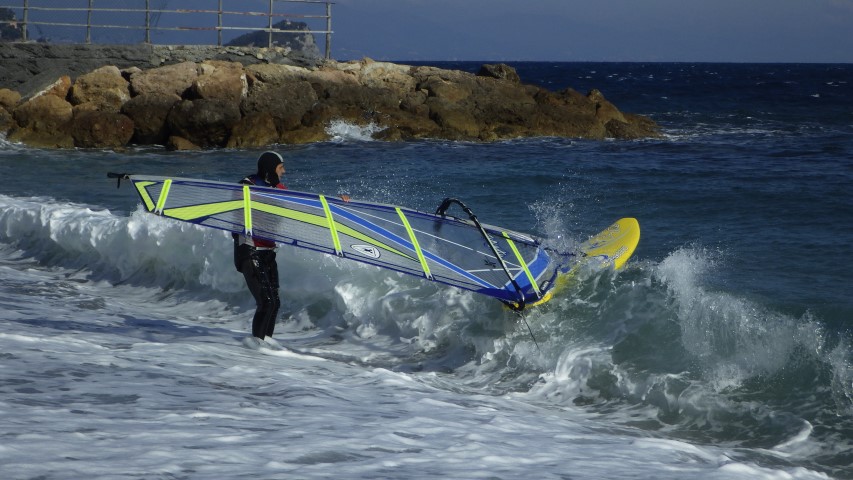 At spot beach, the wind, also at shore, proved to be strong. With the anemometer on the pier immediately to the east of the beach, I first measured an average of 25 knots, with peaks at 29, and then, just before entering the water, during a burst that atomized water, even 35 knots.

Technical data of the session

Average wind of about 25 knots, gusts at 35, north direction, with some changes. Chop of a meter, sometimes steep offshore, and a bit messy. Water still warm.

I did not go out with my 86 liters board, resulting the wind pretty gusty and unstable.

The session was tough, but, ultimately, fun. The wind in water confirmed to be rather unstable, with strong gusts (but not impossible), able to determine truly impressive accelerations, alternating with some annoying lulls (need to exit with the feet from the straps to not fall), and long moments of perfect wind stable as intensity (I would say between 25 and 30 knots), capable of ensuring stable and enjoyable planing. 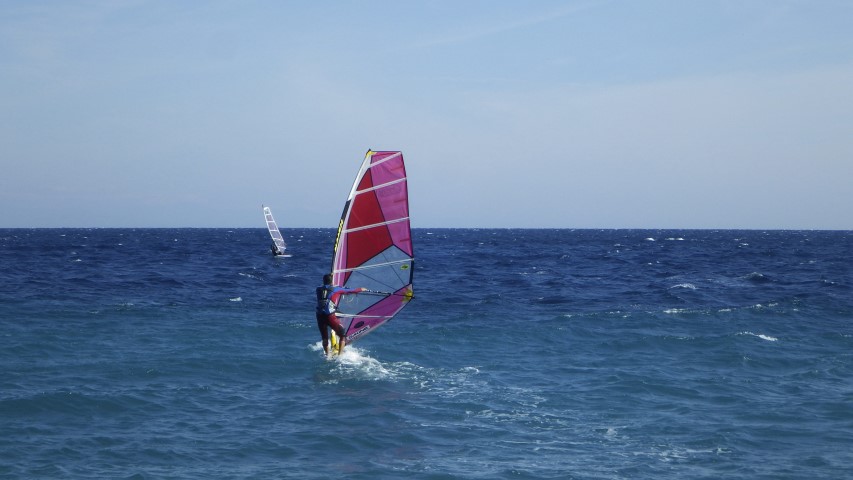 Waves, even if not so much high, were not easy to manage, as it was very variable: sometimes, the chop appeared of no more than half a meter; in other times, you happened to meet, offshore above all, sudden waves of a meter or so, pretty steep, not easy to deal, both in strong gusts, and in lulls as well. In fact, there was little time to prepare to jump.

Waves were much more enjoyable in the return riding. Infact. since the only way to defend yourself in strong gusts was to ride close upwind, on the way back, you had to ride, at least, at a reach (in addition to jibe) to reach the beach of the spot. With this route, the waves resulted to come in the stern, or on your side, with a lot of fun while surfing them. Moreover, you had to exploit them in order to maintain the speed and keep planing also in the lulls. 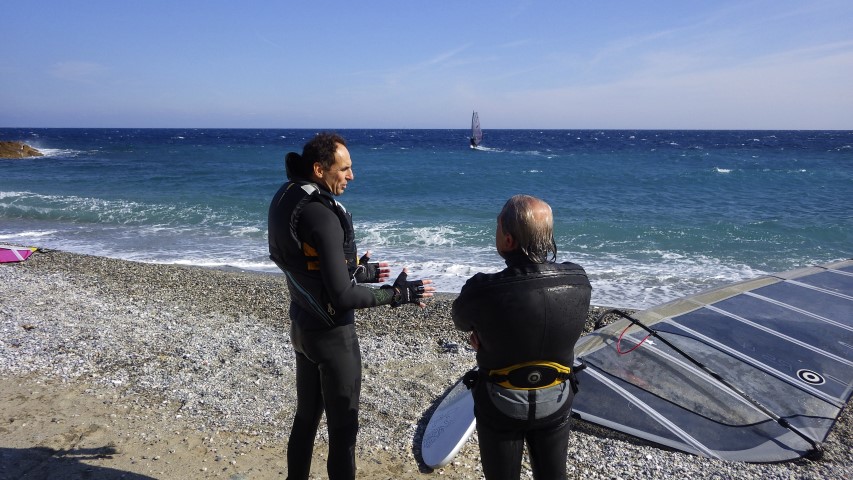 Also maneuvering in such conditions was not easy. In a few words, to maneuver you had to seize the moment .... especially offshore, i.e. when you were less sheltered. Maneuvering in tough gusts for me was almost impossible. But also, past the gusts, you had to be very fast and quick to catch the optimal moments of wind, and with waves not to much bothering. In short, from this point of view, not so much instructive conditions, because little forgiving.

So we often chose to jibe downwind to the dock, east of the beach of the spot, and very close to the shore, where the chop was less annoying. It was necessary, however, to arrive at that point hoping not to be hit by a gust of 35 knots ....

Davide, with his a wave board, and another local rider have shown a remarkable technique while jibing (power jibe, but also lay down, and duck jibe). Watch the video.

Beyond the challenging conditions of the session, however, it was a real pleasure to be in October in the sea (warm!), in a beautiful sunny day. 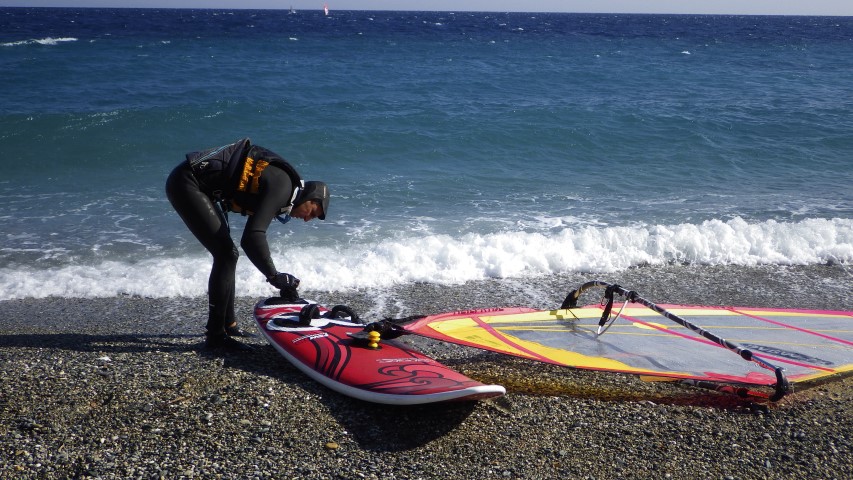 I often found myself, in the midst of the sea, to look at the view of the sunny Ligurian coast, under the deep blue sky, and in the cobalt blue sea around. Feelings that I adore.

Although not resulting in a 10 and praise session, freinds have experienced a fun and enjoyable day, too. Roberto with equipment slalom, went a lot upwind, searching for Matteo Iachino (Pwa athlete), training in Bergeggi (near Noli), up to being in the middle of the bay in front of Spotorno.

Rolando, as usual, made very fast rides, under my eyes, with his Starboard iSonic. 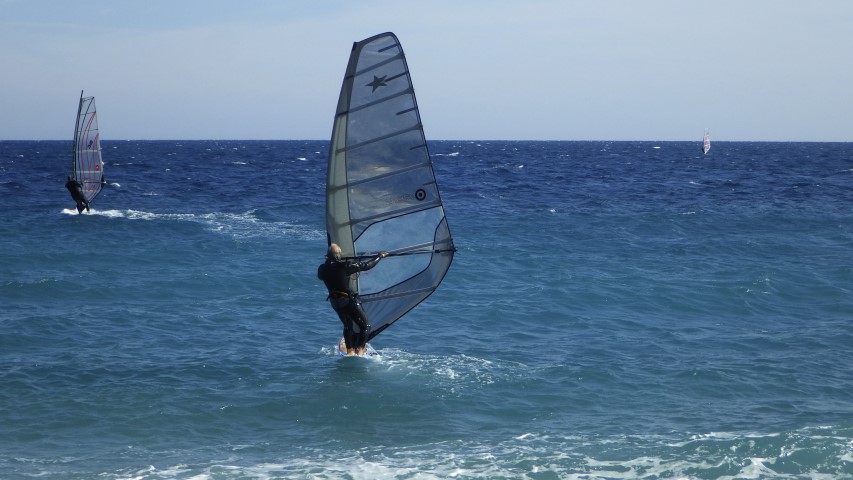 Andrea (a doctor in the company never hurts!), sometimes, went a bit offshore, under the effect of some great adrenaline ride. As well as others (including me), he admitted that he enjoyed most the central part of the session, as during the first part he struggled a bit to get a feel for the demanding conditions of the spot.

We dismount towards 15.30, chatting pleasantly to sunset, not before immortalizing ourselves with our board on the beach.

For the whole slidegallery of the day, click here.

The videos of the session