A day at seaside like that, in December, it's always a big pleasure! On 7th of december, the mythical spot of Spiaggia d'Oro welcomed us with small waves, but with a nice wind that has been strong enough all afternoon. And, above all, with a really pleasant temperature!

Water surface: regular waves of 1,5 meters offshore, not more than 1 meter near the shore. 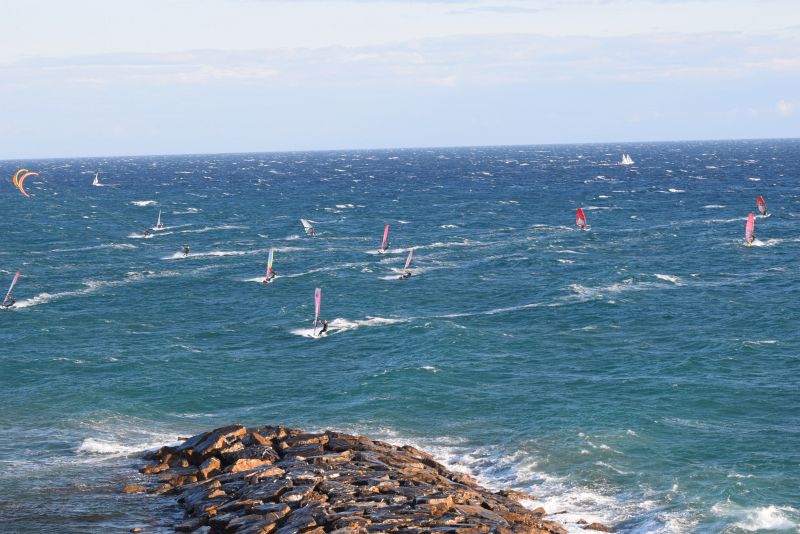 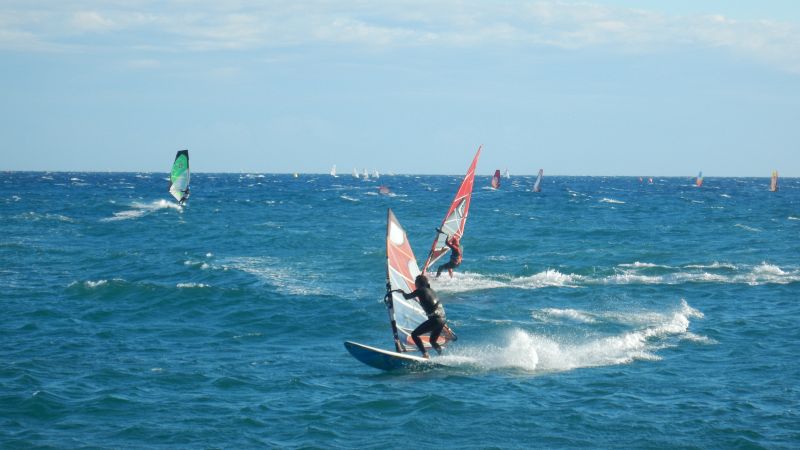 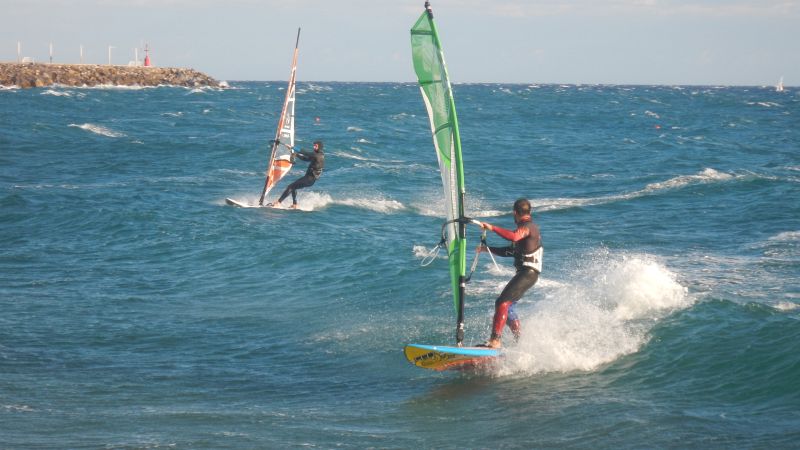 For my first time at the Spiaggia d'Oro, after many sessions in the near Marina di Andora, I chose a quiet day in which to try the spot. Windy.com promised 20 knots, as average, and 30 on gusts; as a matter of fact, 25 knots as average blew over the spot, which, from about 15.00, especially offhsore, became almost 30. The waves were 1 m high, near the shore, and 1.5 meters offshore.

I arrived at the spot with the family just before 12.00. Time to eat a "focaccia" (a kind of pizza with cheese or vegetables) in a bar, and then I went to rig. The 25 knots were ideal for testing the Ezzy Elite 2018, just arrived from Recharge-store.com. I parked at the top of the road leading to the spot, and I rigged very comfortably on the concrete floor of one of the beach's facilities (now closed). At 13.30 I entered into the water. 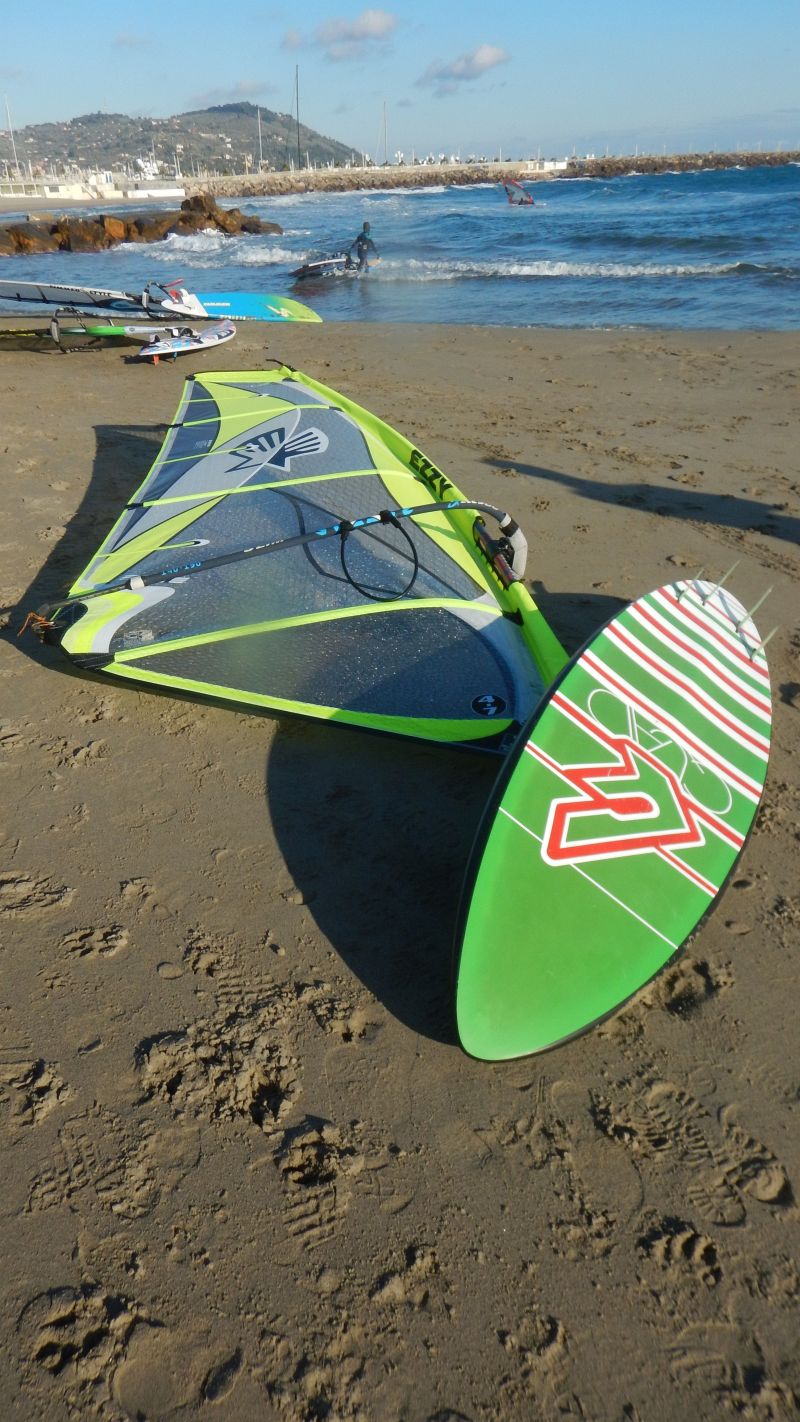 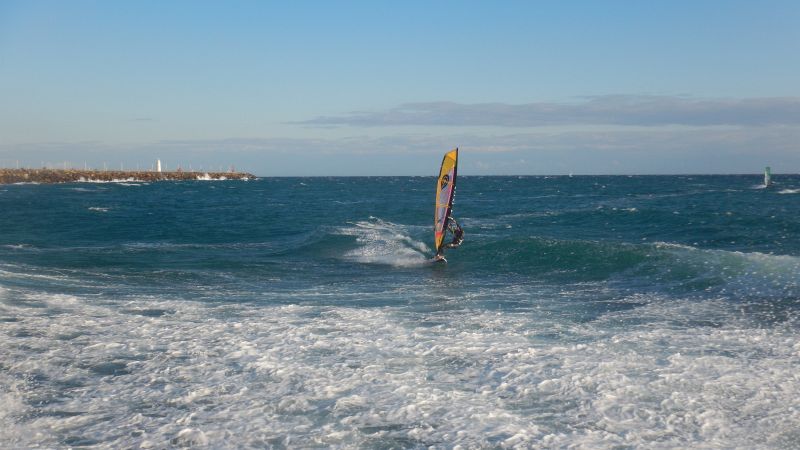 The sensations in the water were immediately positive, and pleasant. The wind was beautiful, with a predominantly side direction, with a slight rotation more from the South (onshore) at open sea. The positive sensations also came from the equipment. I continue to be very satisfied with the Quad Fanatic, which, in rough sea water surface, proves to be fully at ease. The Ezzy Elite 2018 4.7 confirmed the positive impressions of the sister 4.2, which I tested in France last week. It manages very well the changes in wind intensity, between the lip and the bottom of the wave, the sail proves to be very light and neutral in your hands. 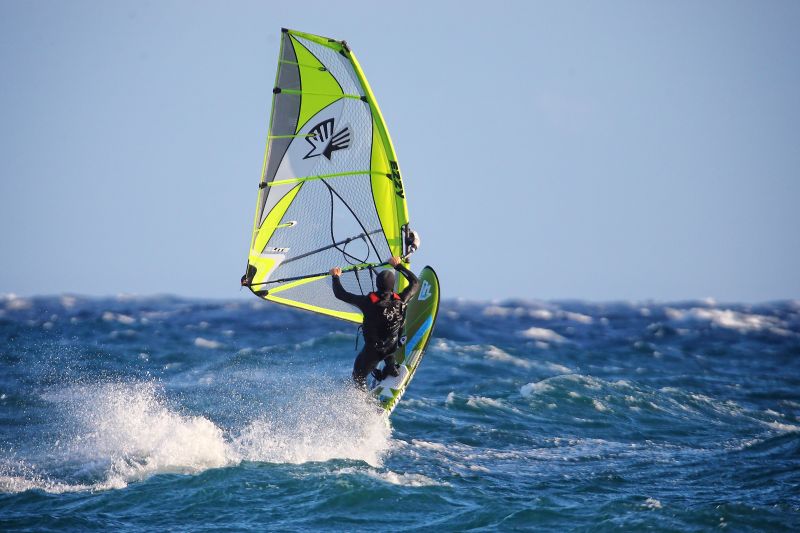 The Quad Fanatic, once again, has confirmed itself excellent in jumps, with a tendency of the board bow to fly to heaven, which I had not found in the other 80 liter board that I have owned so far. Stefano Brugnola, a professional photographer, pictured me during a landing from one of those jumps, testifying to these board qualities (see photo above) 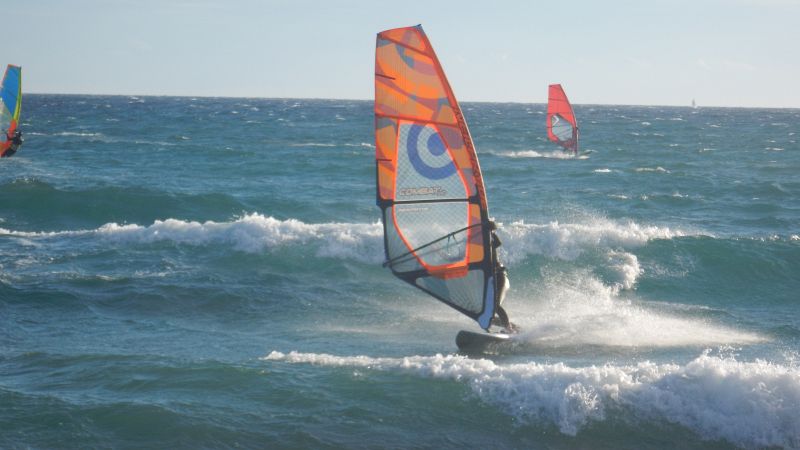 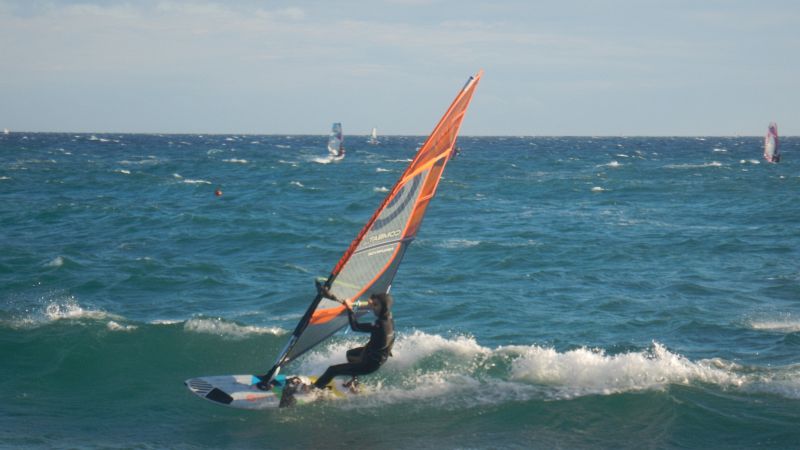 On the way back to the shore, I tried to surf some waves, checking first what the others already experienced riders did. The waves good to be surfed of less than one meter rose upwind the cliffs near the shore. When I reached them, I unhooked form the harness, I slowed down and tried to get some of them, but it was not easy, because the small waves were not so obvious to be read. Even the best riders had not always been able to complete the cut back after the bottom, because in the descent from the wave did not allow them to acquire enough speed.

I did several 30-40 minutes sessions. Unfortunately, France left a few marks on me, last week, and until yesterday I had a bad cold. I was not in the best physical conditions. 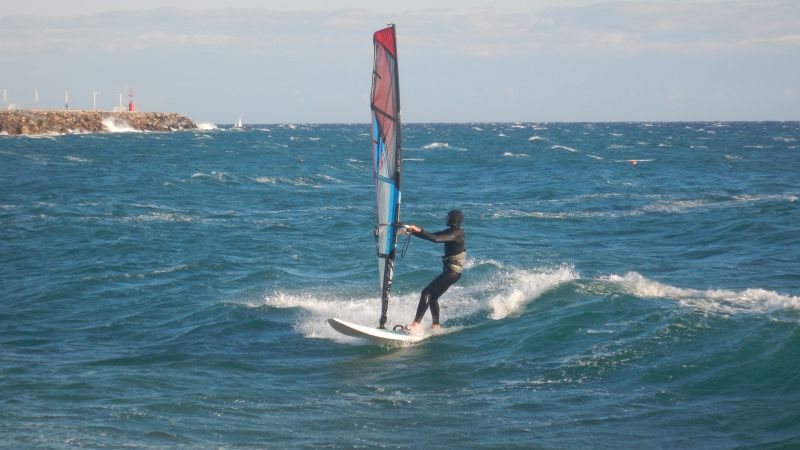 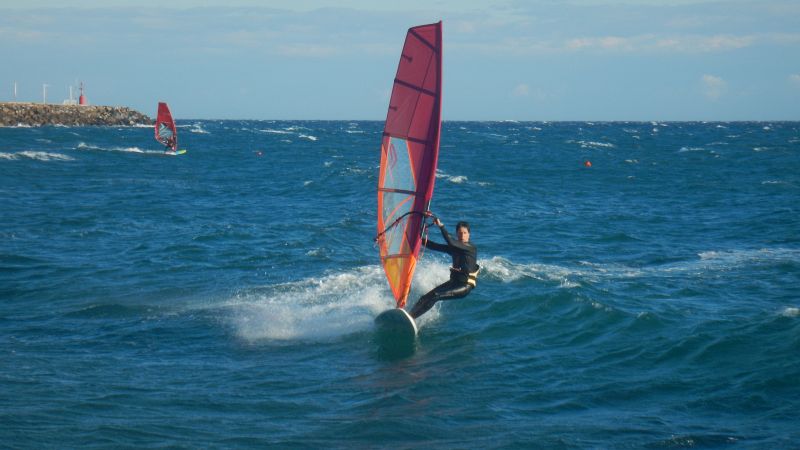 The spot, however, proved convenient; it allows the return and exit when you want (only at the shore, there is some lull). In the water, the long cliff of the port, is always a somewhat frightening presence, but, today, basically, it was not a problem, even if the waves pushed right there, as you could easily ride well at 150 to 200 meters away. 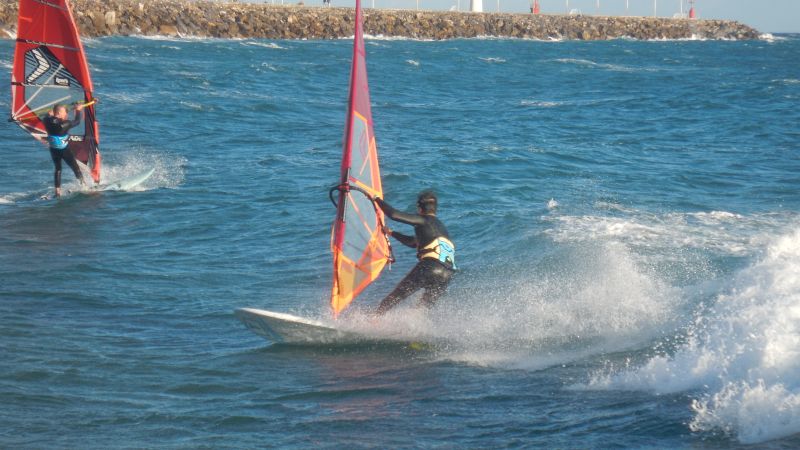 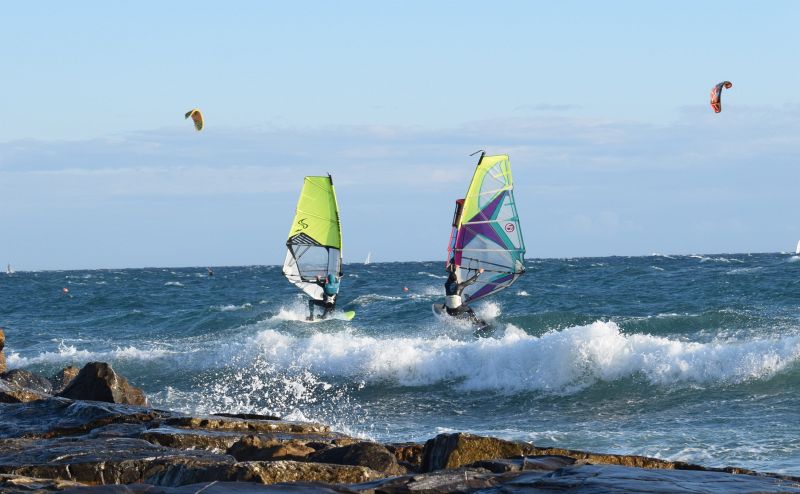 I came out of the water at 15.30, because the wind had become right for a 4.2, but I had no time to change sail. In the meantime, a little wave had also risen.

I really liked Spiggia d'Oro. Next time, we will have to deal with it with a little more wave.

Click here, for the full slidegallery of the day.