Asinara is a small island in the north of Sardinia. It is a national park, not far from Stintino, and is part of the municipality of Porto Torres. In this article, Gian Lorenzo Loria, a local rider, describes how to enjoy its charm with a mountain bike.

It extends in length from north to south; it has been a former prison until the nineties, where mafia characters such as Totò Riina, Bagarella, Cutolo, Boe were imprisoned; and it was as a refuge for Falcone and Borsellino during the drafting of the sentence of the Mafia maxi-trial. Its history is significant for the community of Stintino: in the second half of the nineteenth century, having identified the island as the ideal location for a prison, the newborn Kingdom of Italy requisitioned the entire island from the fishing community that lived there, granting land on the main island, which would become the village of Stintino.

Since then, the whole history of Asinara has been inextricably linked to prison. All the structures on the island are functional to the penal colony. Structured colony to house prisoners with different degrees of isolation and hardness and the guardhouse. Almost totally autonomous for food and water, the prisoners cultivated and raised what they needed and the remains of the buildings are proof of this.

It can be visited on foot, with the small bus made available by the park, by Jeep, by bicycle. The writer has explored the island by bicycle in two excursions of two days each. You can arrive with your own bike starting from Porto Torres with the maritime connection to Cala Reale (about halfway through the island) or rent one of the MTB or E-bikes directly on the island, in the Fornelli office, in the extreme south. The service is complete, in agreement with the taxiboat that takes you directly from Stintino to the landing place, for departure.

For simplicity, I will illustrate the visit from South to North and back.
Starting from the wharf, follow the concrete road up to the chapel that you see on the left going up, ruined, but very characteristic. From here, following the path in a westerly direction, a semicircle route can be ridden, which passes over the small cliffs exposed to the mistral winds, and ends just below the Fornelli prison facility, which is open to visitors on special occasions. 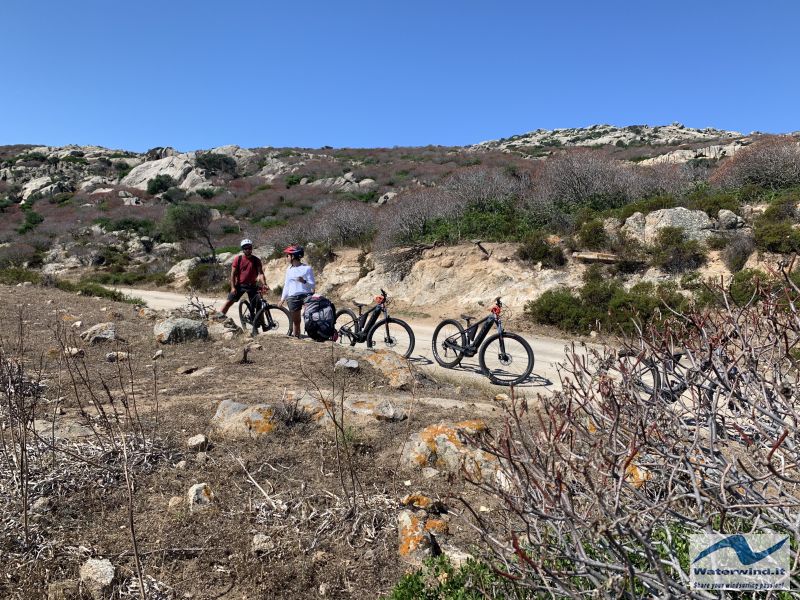 Behind the prison, there is a small village of farmers, also used by prisoners in a milder regime. Continuing north on the concrete road, you arrive at the trek path to the Fortezza del Castellaccio, a medieval stronghold that dominated the Strait of Fornelli and the entire Gulf of Torres. Easy climb even by bike up to the half of the way, then it becomes a little more technical, but easily passable on foot; it will take you to a breathtaking panorama.

Back on the road and continuing north, you arrive at cala Sant'Andrea on the east side.

The ride, after a somewhat long climb, but with a delicate slope, leads to a viewpoint which shows the narrowest point of the island, with the sea "inside" and the one "outside", which, from our perspective, almost get in touch.

Following the traced road, you will skirt coasts and beautiful beaches, left in a wild condition by the status of Park which the island enjoys.

After a few kilometers we find on the left the Austro-Hungarian ossuary, tragic testimony of the cruelty of wars, in particular of the wars of independence of Italy.

Immediately after the stables, where it is possible to reserve an excursion (mandatory at least a couple of weeks in advance, in summer, due to popular demand).

Immediately further on, we find the Asinara Marine Animal Recovery Center, where assistance is provided to the animals that are in need in this area of ​​the Mediterranean. It can be visited by paying a small ticket which contributes to the support of the centre.

Thus we have arrived at Cala Reale, where we find the largest structures and the park headquarters. Unfortunately, there are very few structures that can be visited, but it is important to stock up on water and food at the bar, if you are lacking them, because the next exercise is miles away, and sun and effort wait for you.

Normally, I arrive at Cala Reale just before lunch, so I take advantage of it and camp a little further on, under the Trabuccato tower. In order: swimming, lunch in the shade of the equipped area, and a walk up to the tower are a must for a complete visit. 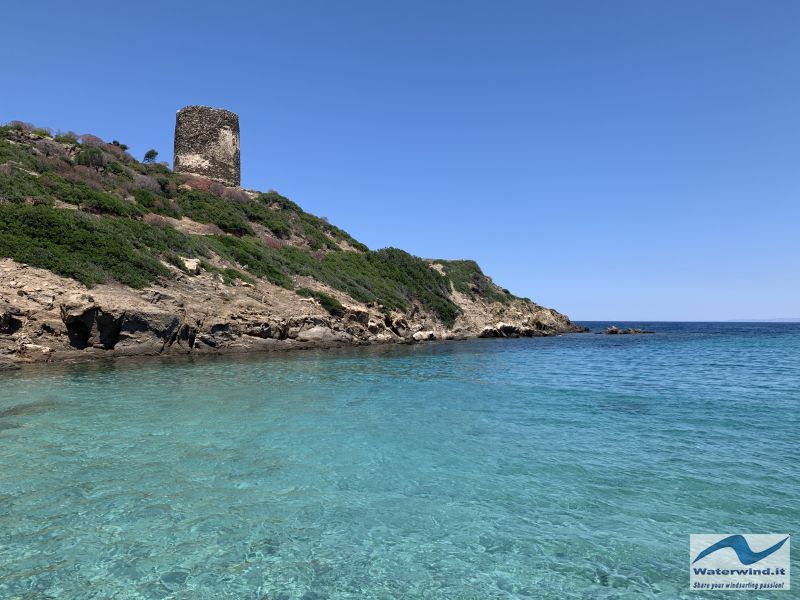 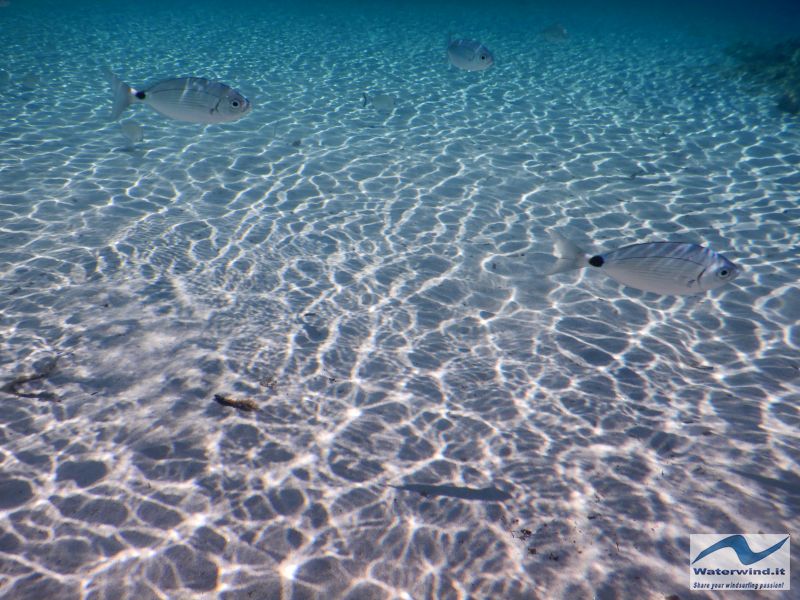 We need to make another important level change to get to the descent that will take us to Cala dei Detenuti (formerly Cala Murichessa) with its platforms on the emerald water and the picnic area; and immediately after to Cala d'Oliva, the true center of the island.

It is the village with the most active structures, including the bar, the restaurant, the hotel, the hostel, a beautiful diving center, through which you can make beautiful dives in waters full of life and colors.
Also worth visiting is "the disco", the section of the prison where the most famous mafia bosses were held, so called because the lights once were on at any time of the day; and the house where Falcone and Borsellino stayed during the drafting of the sentence, now the headquarters of the Ente Foreste (Forest Office).

From here, two beautiful paths start that you can do by bike; they're a bit technical but within the reach of those who have already done some excursions on a mountain bike.
On the road to Cala Sabina, we find a crossroads on the left which, through a succession of ups and downs paved with stones, leads first to the lighthouse of Punta Caprera, in the extreme north, with a 360° view, which will leave you speechless for several days; and then to the "Semaforo", which in ancient times regulated the passage of ships from East to West and vice versa. This path, with a total time of about 2 hours for amateur cyclists, forces us to keep in mind daylight hours and, if you are staying in the hostel, also with dinner times.

The other path, which leads to the "Sardinian houses" and to the locality of Elighe Mannu is longer, can be reached both from the Semaforo and from Cala d'Oliva or from Cala dei Detenuti, the distance is about 4h to which you have to add pauses for photographs and to rest a bit.

Returning towards Fornelli, to return the bikes and return to the main island (the big one that I am lucky enough to call home), we find on the left the path of the granite mine, which runs along the entire south-eastern part of Asinara and leads us to a small detour and to the site of what used to be a real quarry. We can still find the workers' shelter, a small house where the signs of fire are evident, the tracks and the small pier where the large blocks of granite were loaded onto the barges. Looking closely at the rocks, you can see the signs of workings and cuts. Going back to the main dirt road we can skirt the beaches that are normally frequented by tourists on foot and get back to Fornelli from the east, concluding a magnificent tour in a small wild oasis right in the center of the Mediterranean.

Click here for the complete slidegallery of the Asinara tour

The hostel has very affordable prices, breakfast and dinner are included and there is the possibility of taking a packed lunch for the next day.
At the diving center you can book dives for all levels, from snorkeling to diving onwards, having the opportunity to see an extraordinary and luxuriant nature.
There are only three locations where it is possible to stock up on water: Fornelli, Cala Reale, Cala d'Oliva; therefore you have to deal well with water reserves.
Very little shade on the whole island! It is very important to cover yourself well, even under the helmet with a bandana, to get wet if necessary. From spring onwards the temperatures are torrid and a heatstroke is always lurking.
Beware of beaches and restricted areas! Whatever means you use to arrive, you will be informed of the areas in which access to visitors is prohibited for various reasons. The areas are also marked with large and visible signs.
The symbolic animals of the island are the white donkeys, you will not fail to meet many of them; they approach in search of food and are harmless. Many other species inhabit the island, birds of all kinds, wild boars, foxes, hares…

HOW TO GET THERE

WHAT TO DO AT ASINARA ISLAND

Contacts for visits and reservations: