What could be better than spending your birthday at Coudouliere, in Southern France, on a mistral day? Saturday this spot, which I appreciate more and more, gave me just a nice day.

For this three days of Mistral in France, I left from Italy, on Friday morning, with the idea of ​​heading (for time reasons) to Hyeres (La Madrague). Near my destination, I was greatly amazed by the temperature marked by the car thermometer: 36 Celsius degrees in Hyeres, which I had never seen here before!

However, once arrived at the spot, I found a good wind waiting for me, and some known guys. Nicola was changing sail (from 6.2, he first switched to 5.3, and then to 4.5). The spot was also quite crowded (even by mosquitoes...), as I had never seen before in August (but perhaps the other times I came here on summer time, the strong mistral, and the resulting lower temperature, had kept the swimmers awayfrom the spot).

Anyway, in short, Hyeres gave me a mediocre session this time. The mistral wind has never stabilized for the whole afternoon, probably because of a direction too much from the south west. The couple 4.7 sail and Quad 87 (even if set to Twinzer), did not work properly; a less pretentious couple 5.5 sail and 106 board would have allowed me to enjoy better the session. But at the moment I arrived at the spot, the wind looked pretty good (I measured between 20 and 30 knots). 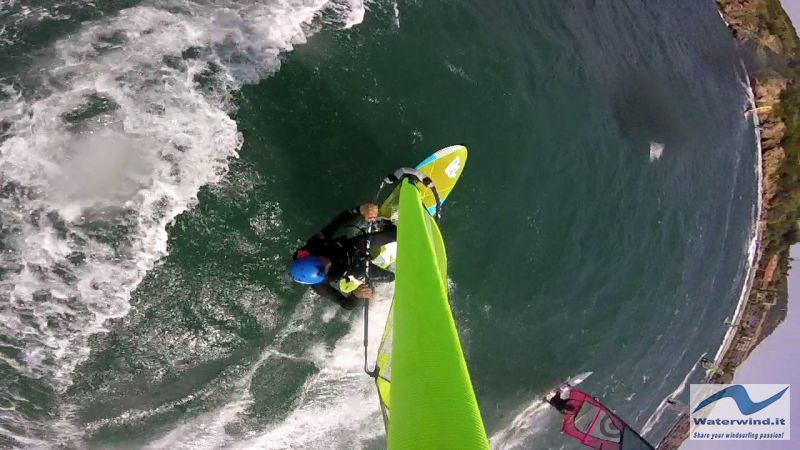 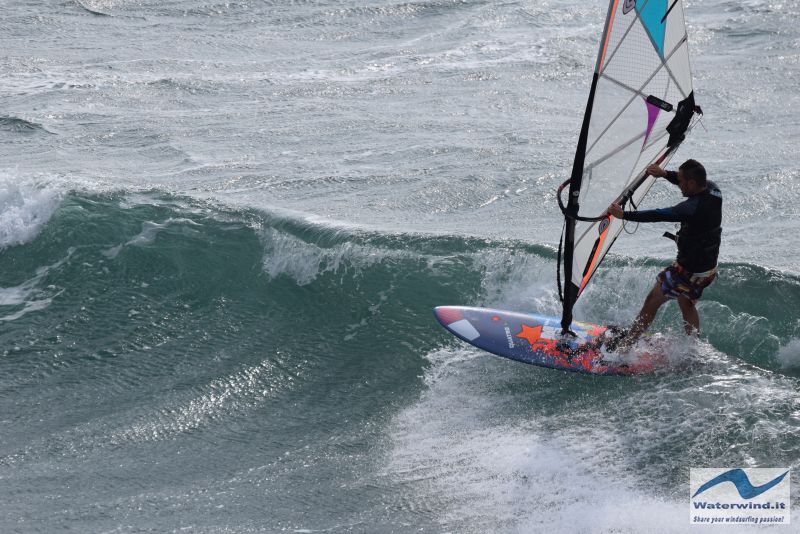 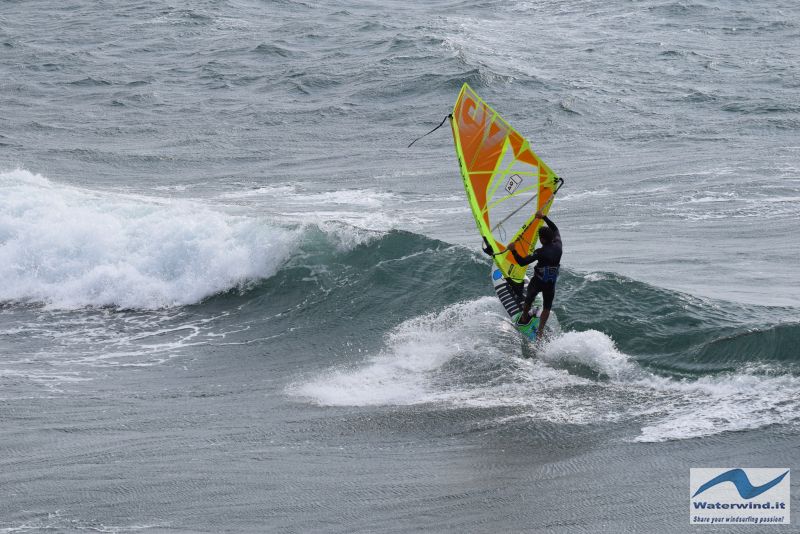 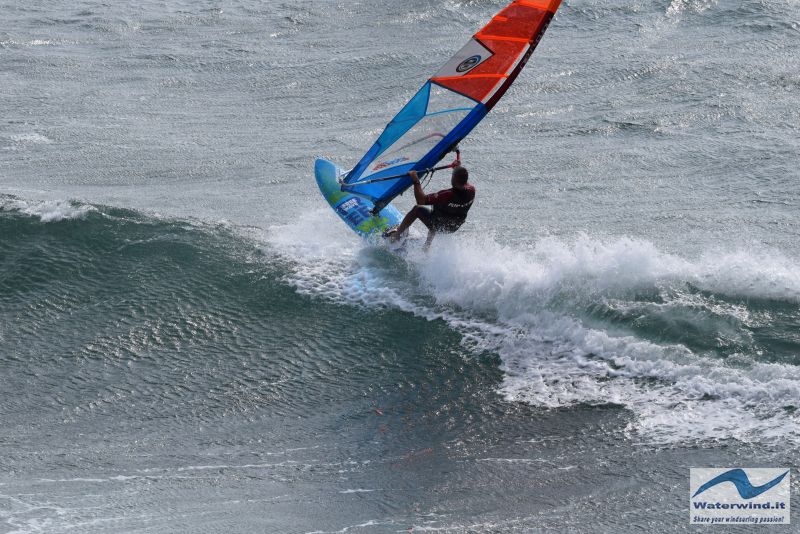 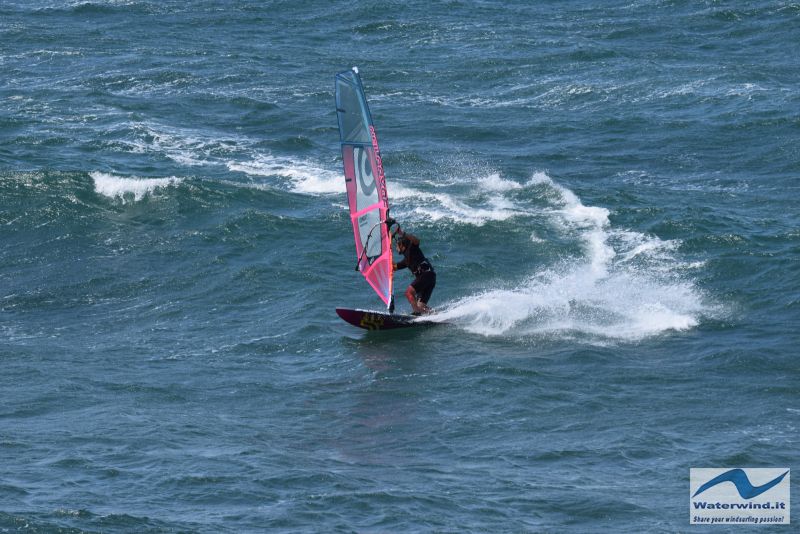 The day after, Saturday, the mistral predictions were really good, and I decided to spend my birthday at La Coudouliere, at Six Fours Les Plages. It's a spot that I love more and more, and I have to say that it's less difficult than it is told. Saturday, it was a full day, and on the spot, I have seen riders in the water from early morning till sunset. What a show!

Early in the morning, I arrived at the parking lot right next to the spot beach. The parking ban for fireworks, fortunately, was canceled (with the Mistral the fires have been postponed). Parking here is convenient to rig (on the asphalt, without dirtying the sails); it is sheltered from the wind (like the spot beach at the point to entry into the water), and you have the opportunity to rest and warm up (when needed, in winter). The local riders, on average, are kind and helpful. You can see immediately, that here the level of the surfers, and the quality of the equipment are, on average, superior to other spots. In the water, then, the conditions are always funny, even if Saturday, at times (and especially in the morning), the spot has not worked at best, because of wind blowing too much from the West - even SW (in this case, the island of Saint Pierre disturbs the wind). In the afternoon the wind was more beautiful. I have done three sessions here, on saturday. 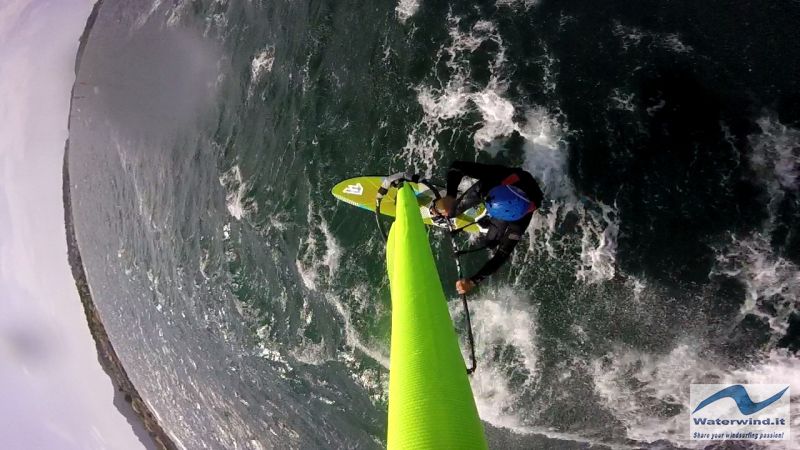 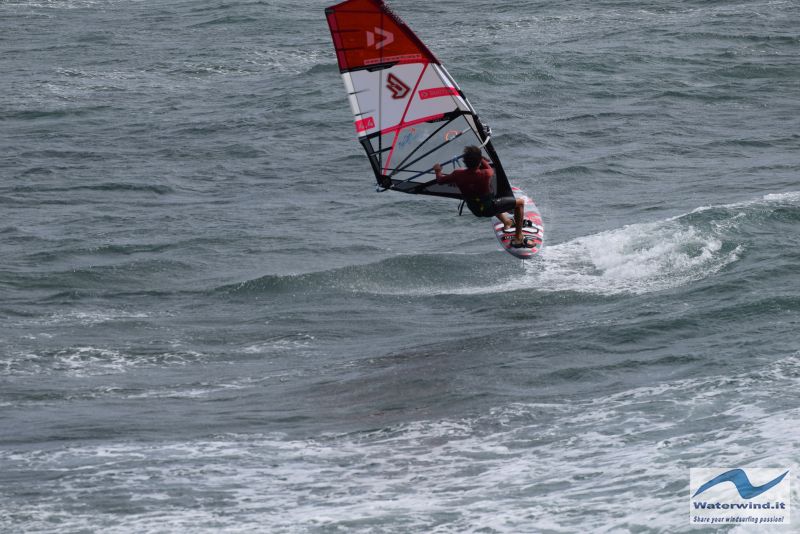 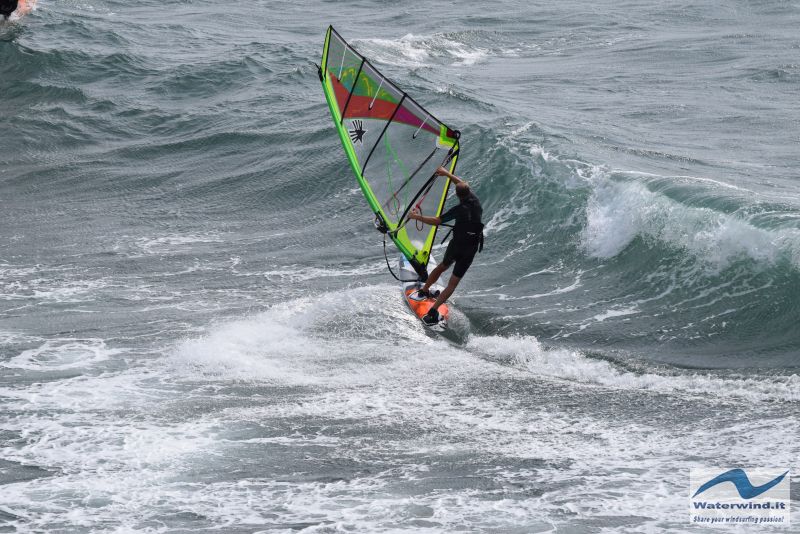 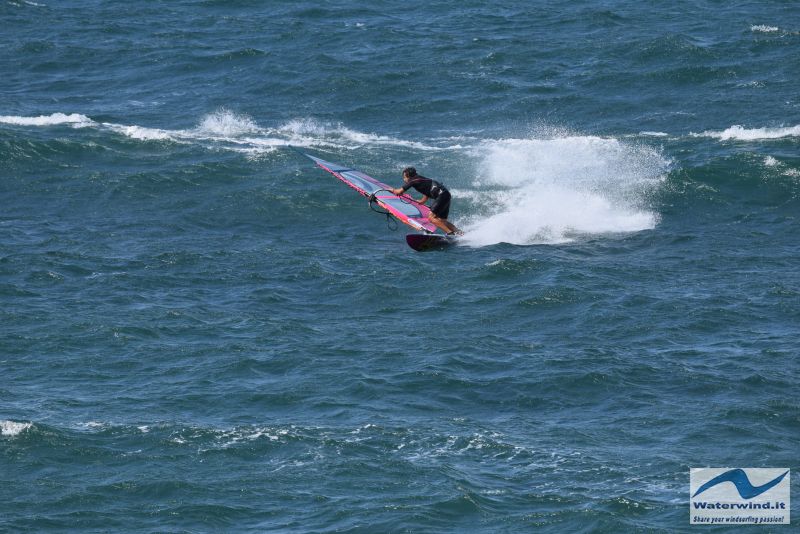 On my arrival at the spot, on the pier of the port I measured an average wind at 25 knots, with gusts of almost 30, and lulls close to 20.

So I decided to rig the Ezzy Elite 4,7 2018, sheeting hard the downhaul.... At the Coudouliere, with the Fanatic Quad 87 TE 2013, I do not want to run the risk of being underpowered. The Ezzy Elite, so trimmed, has wonderfully done its duty, with a proper loose leech on the toughest gusts, but ensuring power, especially in the moment, sometimes delicate at the Coudouliere, immediately after the beach start, when you must quickly gain the center of the bay, and keep as far as possible from the leeward port breakwater. And also the Fanatic Quad behaved very well (set with the 4 standard fins), going upwind well, turning tight at will, and remaining well in control even in times when the sail was a bit big. The water turned out to be really warm, and the shorty wetsuit would have been comfortable, but I did not want to risk it, and I came out with a 3/2 mm long wetsuit.

Of the two morning sessions, I especially liked the first, for the best wind quality (slightly more rotated from the North-West): easy starting from the beach, spot not already crowded, and possibility to position yourself well upwind, in the best area to catch the waves, near Cap Negre. The waves on Saturday were not at the best, to be honest. Being the Mistral recently entered over the spot (just the day before and not strong), the waves were not high, and they were not very steep, with greater difficulty (at least for me) in reading them. On the other hand, they were, however, very forgiving for waveriding beginners like me. I surfed some of them, although, often, I found myself with too much low speed after the bottom-turn. On one hand, I probably closed the sail too much during the bootm, without this always being necessary; on the other hand, trying to catch the steepest waves close to Cap Negre, I ended up in an area with a wind hole (I need to know the spot better). I envied a lot those then I filmed from the top of Cap Negre, who hold the waves for a long time, and remain always on the lip .... I often happened to end up in the foams area, formed by the waves that have broken, where the bottom is shallow, and where I had to be careful not to put my foot on some sea urchin, having obviously come out barefoot. 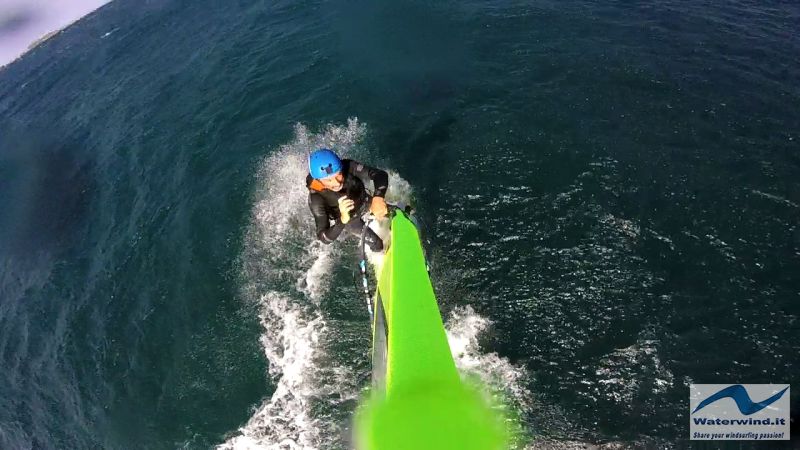 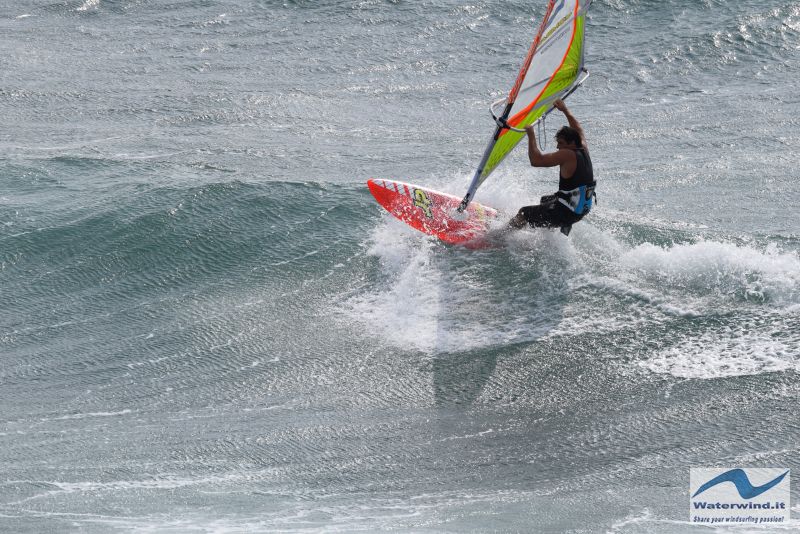 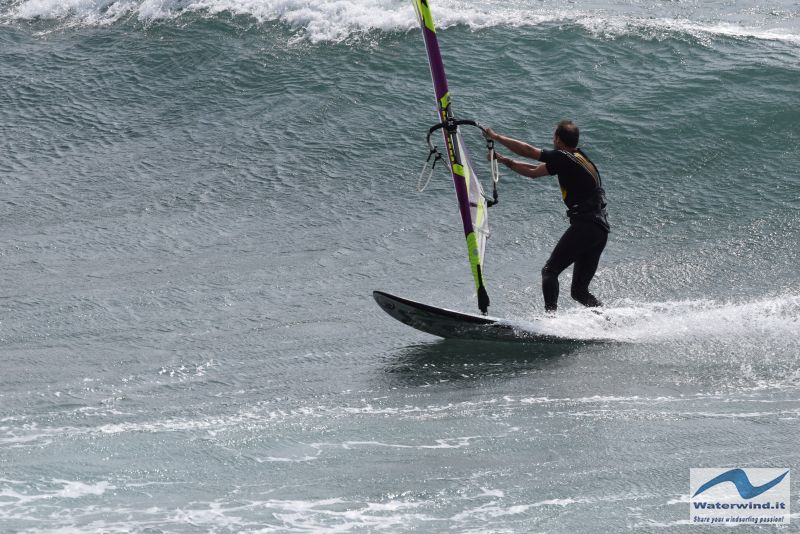 During maneuvers, I did some mistakes, perhaps for lack of concentration in the final part of the maneuver, when I often get myself convinced to have it landend and my mind "relaxes".

Instead, I enjoyed myself a lot with jumps, some of which really high (at least for me), as seen in the video. I love to jump on starboard tack, and now my technique is good. It would be time to try the forward (or maybe a back loop?).

I liked a little less the second session of the morning, for a rotation of wind from the South West, which made even more insidious the starting, since I passed not far from the the port breakwater.... And so, as Ezio Papalia (Riwmag) said, better to eat, and keep the energy for the afternoon.

Yes, the great thing about these mistral days is that they never end ..... The most trained riders stay in the water even 4 consecutive hours ... The normal riders like me can only afford to do more sessions, for about one and a half hours each.

So I took time to eat something, and to make videos and photos from the top of Cap Negre. In addition to Ezio, on the spot, I found some other friends, and some Pro, as Adrien Bosson, the very strong French freestyler, who did so well at the recent PWA of Fuerteventura. Adrien, Saturday, remained near the shore to train, showing his skills. Other very good freestylers trained, always near the shore, or with some loops in the bay (one of these, during a very high jump, lost the equipment, risking that it ended up on another rider ....). 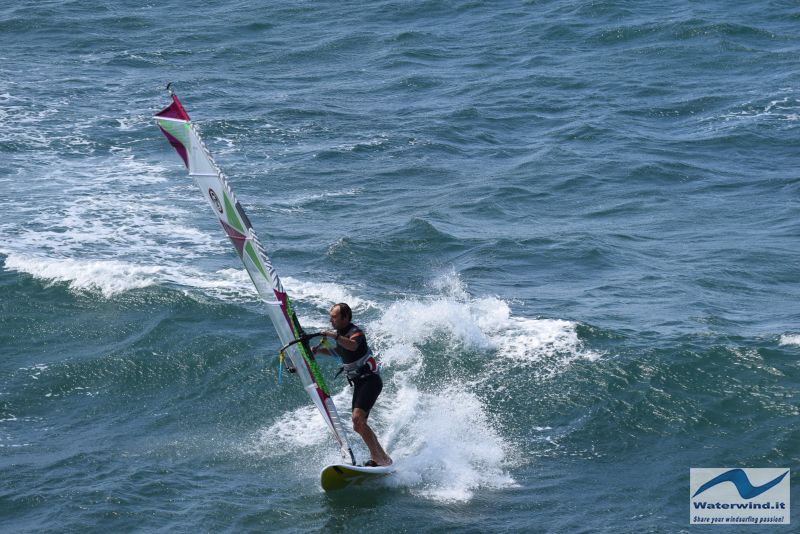 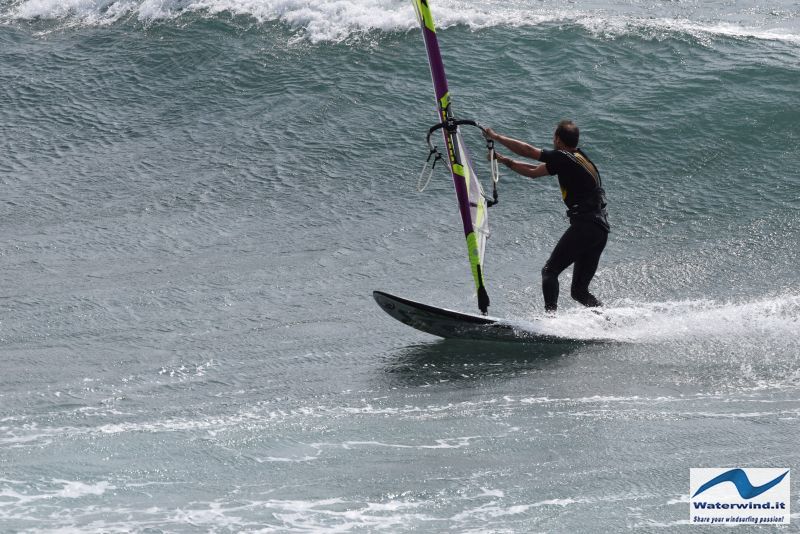 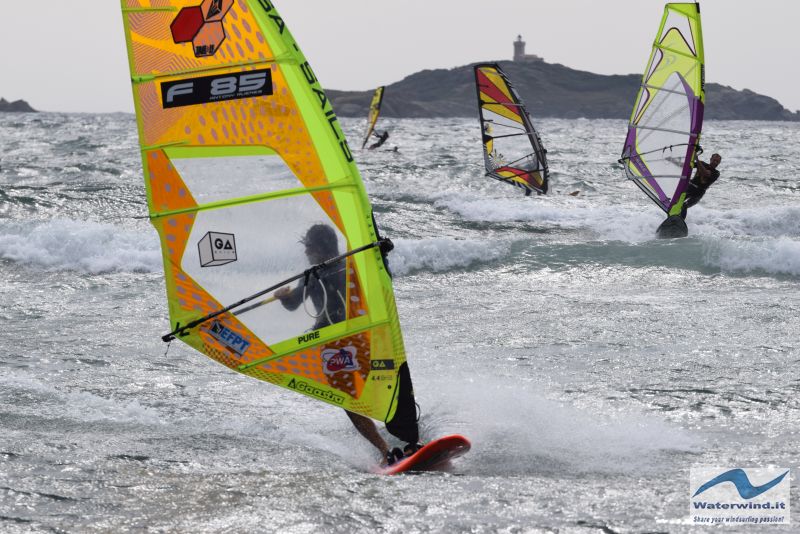 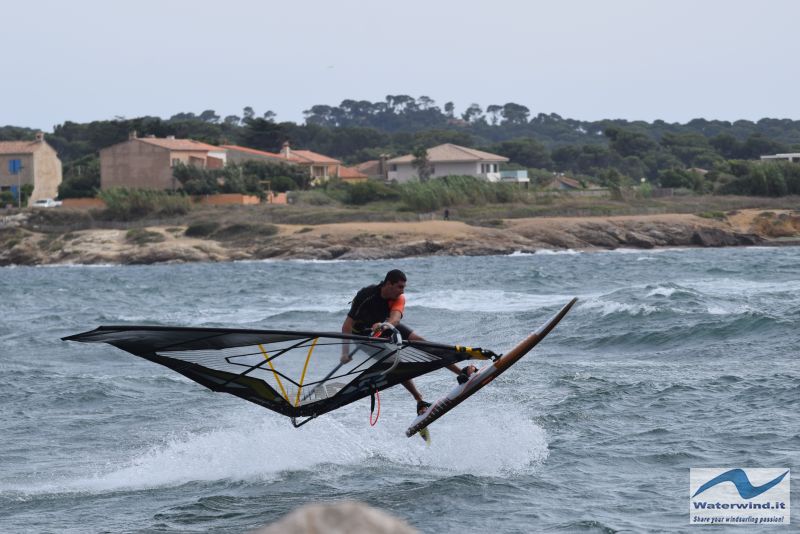 Despite the greater crowding, in the afternoon, the spot was still enjoyable, with the wind that, at times, was good (from NW), and slightly stronger, in others more unstable, for transient SW rotations.

I enjoyed another hour and a half. As soon as I entered into the water, I had the impression that the sail could be too big, but in reality, only at times, the wind approached 30 knots, to remain instead on average at 25, and therefore I stayed with the Ezzy 4.7 throughout the session.

The waves slightly grew, especially in the center of the bay (here, just over two meters). Unluckily, those in front of the port breakwater are not so much exploitable for waveriding, because they are the highest, the steepest, and the easiest to be read: but if you drift too much leeward, or you lose the equipment here, we could approach the port breakwaters too dangerously.

After the third session, I quietly put away my equipment, I made order in my car. Before leaving Six Fours coast, I stopped at Le Brusc to admire another breathtaking sunset over the gulf and the islands in the background, with still the last surfers in the water, at the last lights of the day. 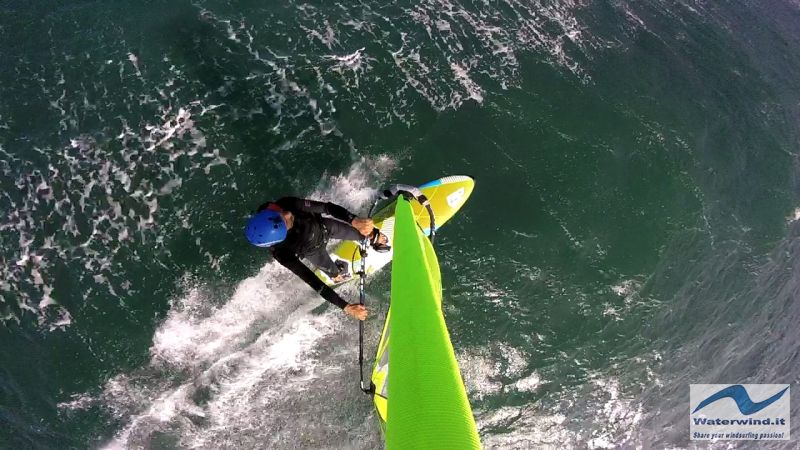 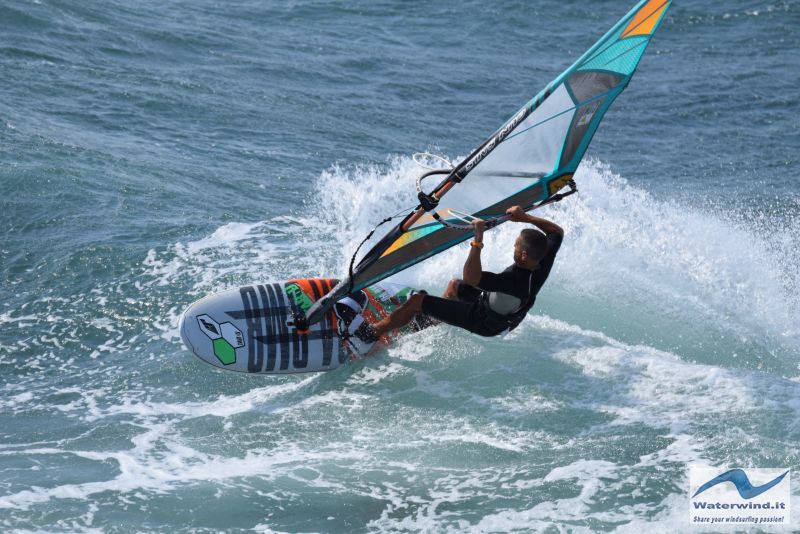 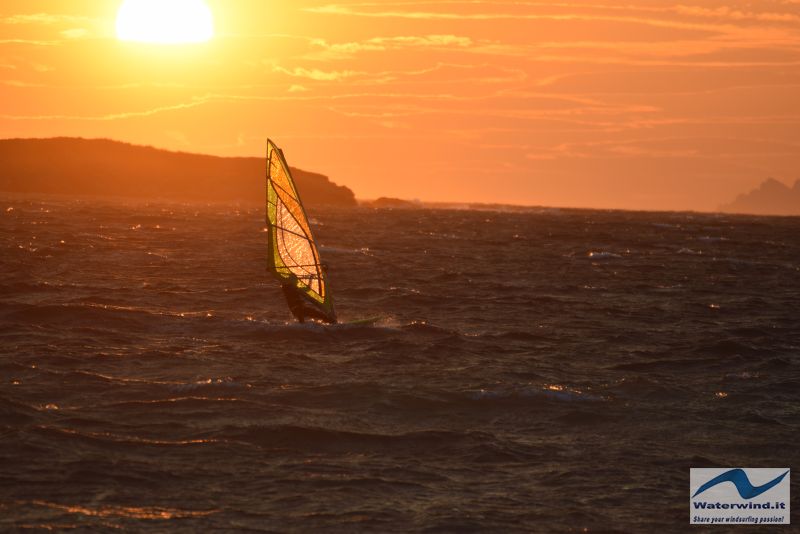 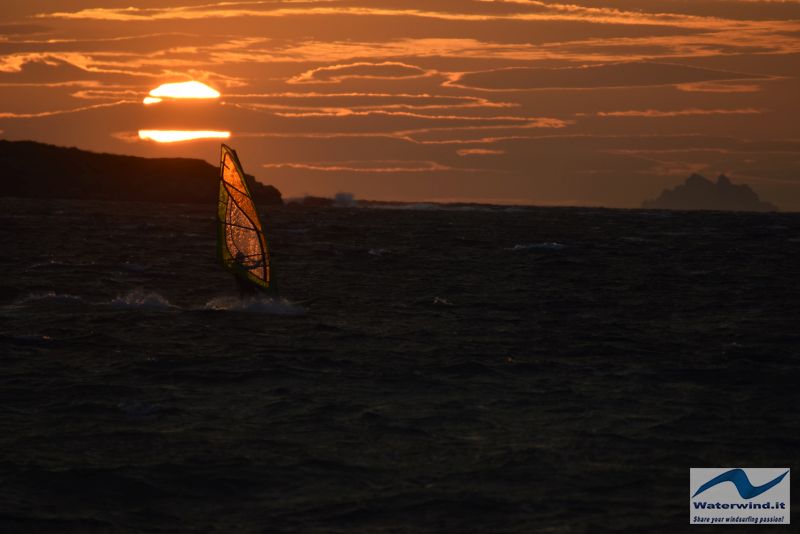 It was just a nice birthday, which I will remember for a long time. When you come away from La Coudouliere, you immediately begin to feel nostalgia.

Click here, to see the complete slidegallery of the day.

P.s. Read also the article about the session at Le Brusc, on 26th of August.