You'll never forget your very first time at La Coudou..... I made a very good experience on Monday 11 september, and also had much fun, on my first real exit at Coudou Beach.... With me other friends, also at their first time.

Dressing: Long wetsuit 4/3 (but someone was out with the shorty) 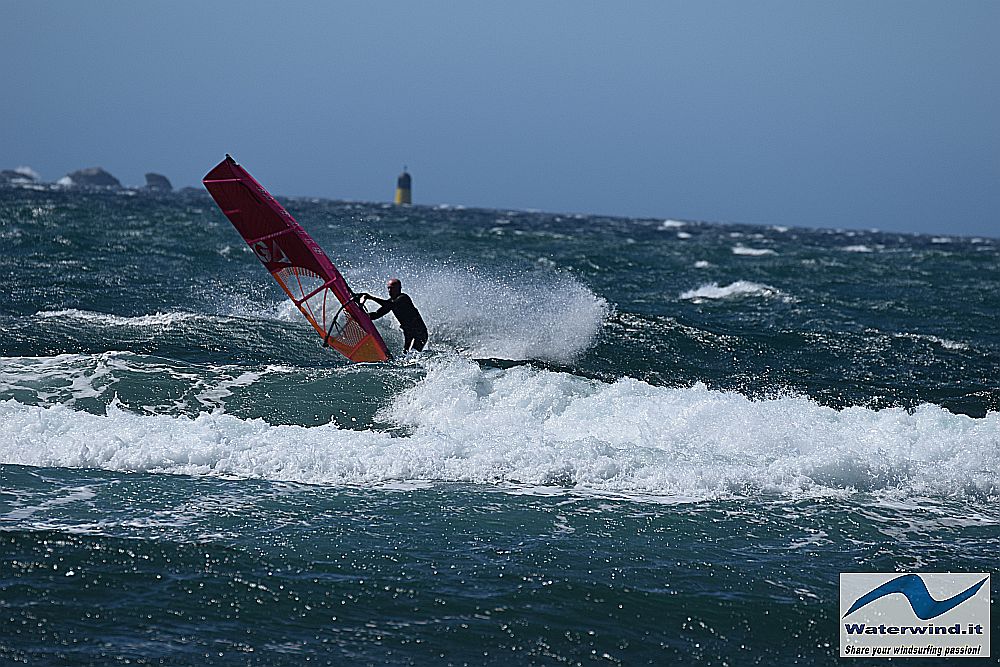 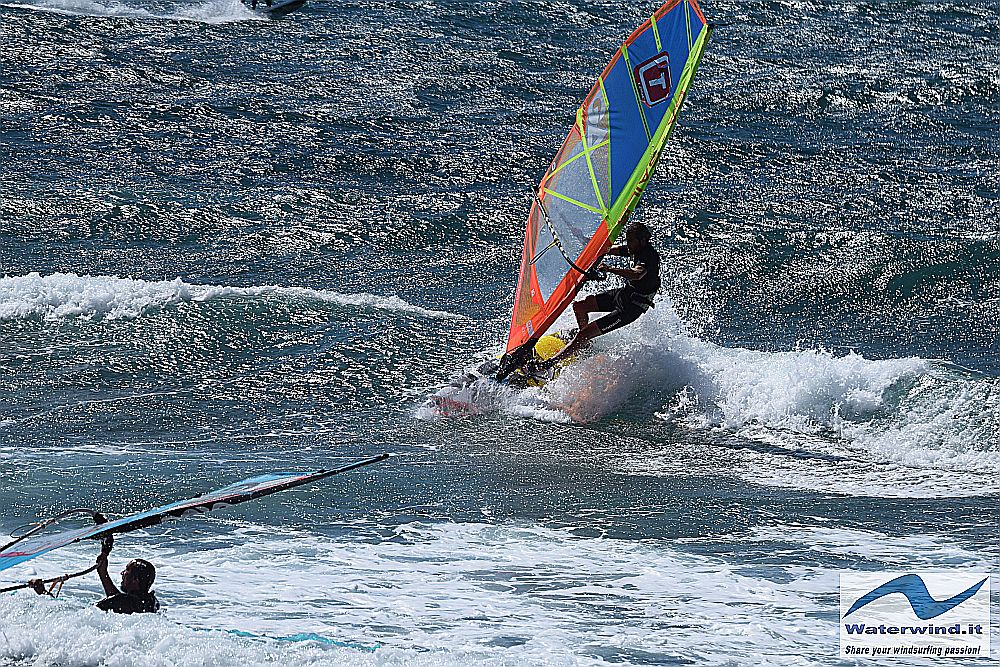 What a beautiful emotion! After having "tasted" la Coudouliere during my session at Six Fours on May, arriving from Le Brusc (read report), on Monday, I tried the spot just starting my seission form La Coudouliere beach, south of Cap Negre. The spot has proved to be very fun, and very instructive, if you really want to seriously improve your level, and with some compulsory cautions, less dangerous than you might think (at least with the wind intensity that we had during our session).

With me on the spot, my friends Michele and Andrea (also at their first time, under serious conditions). Also on the spot are Mirco from Brescia, Claudio Bertagna, Simmer agent for Italy, hosted by his friend Guillaume, as well as several usual strong local riders. 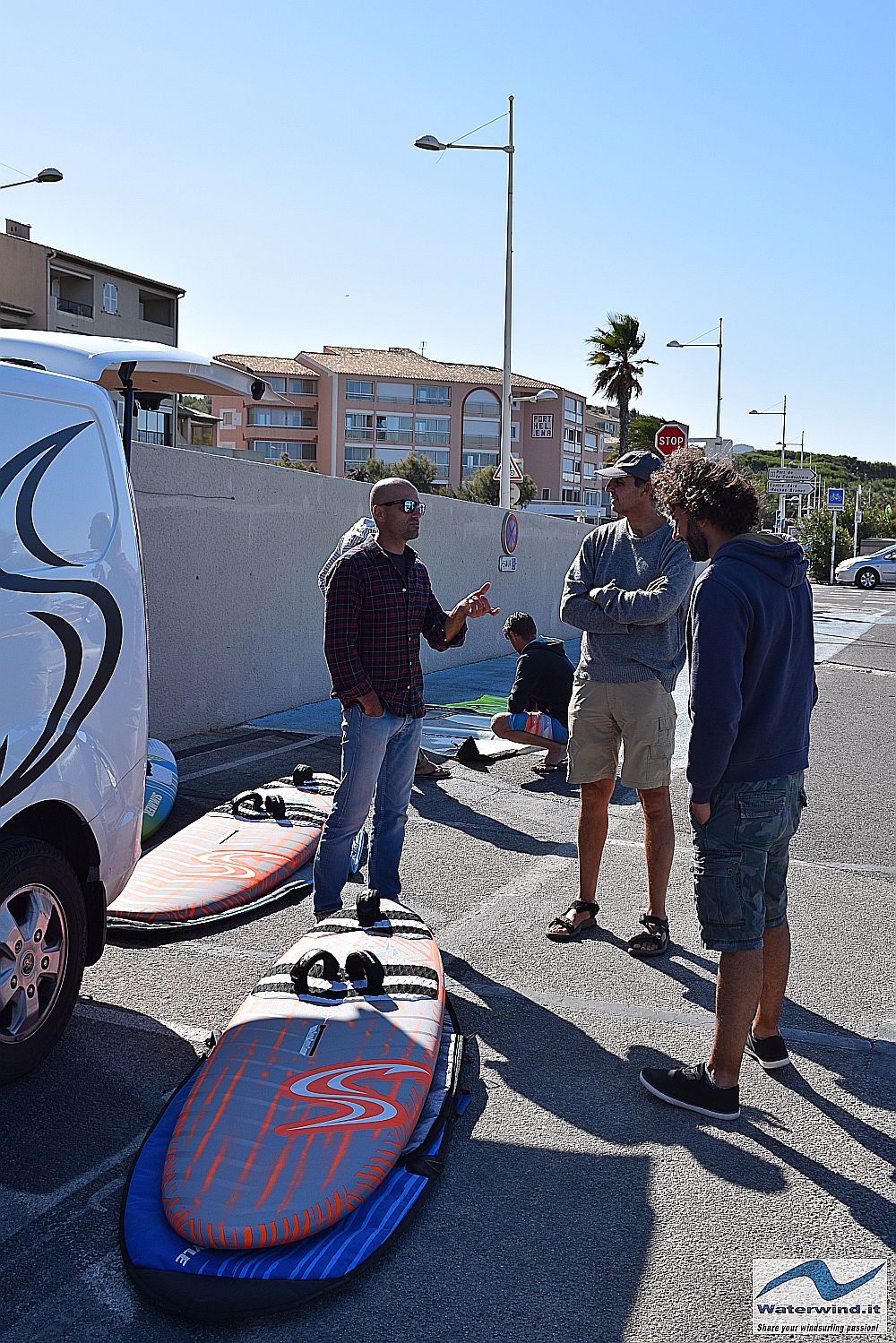 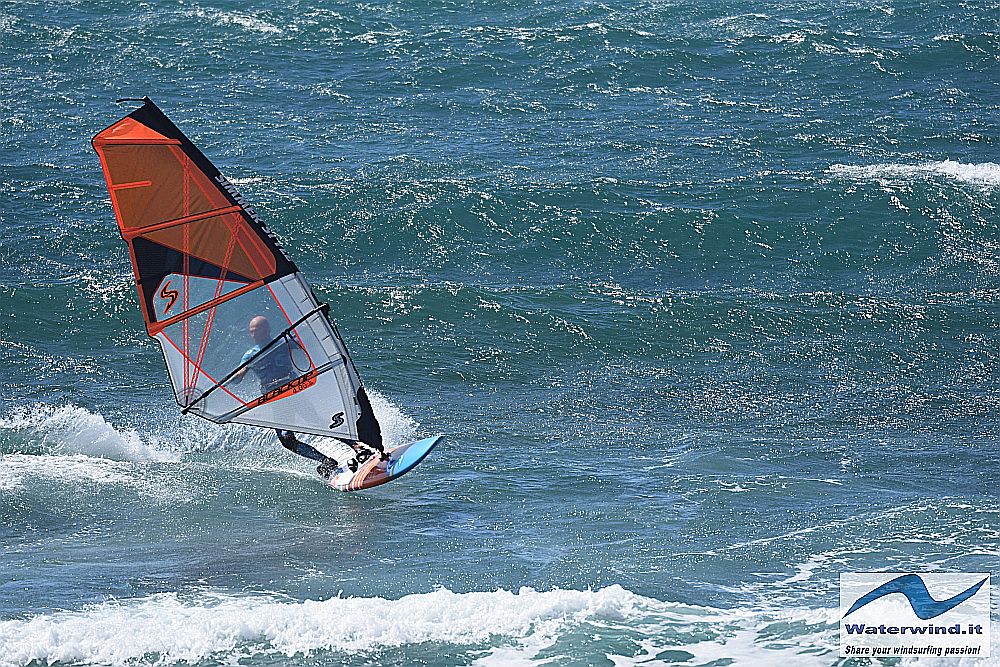 To try to enjoy the spot in a bit less demanding conditions (and even with less crowd, being on Monday), we entered into the water fairly early (around 11.00 am). Already in the morning the wind was blowing well over the spot (I measured 20 knots at about 10.00), though not with the ideal direction, coming from the West and not from the North West. Little waves at the beginning of the morning.

I prepared the 4,7 Ezzy Elite 4 battens, matched with a Fanatic Triwave 86, with the center fin back, and side fins in advanced position for more grip. 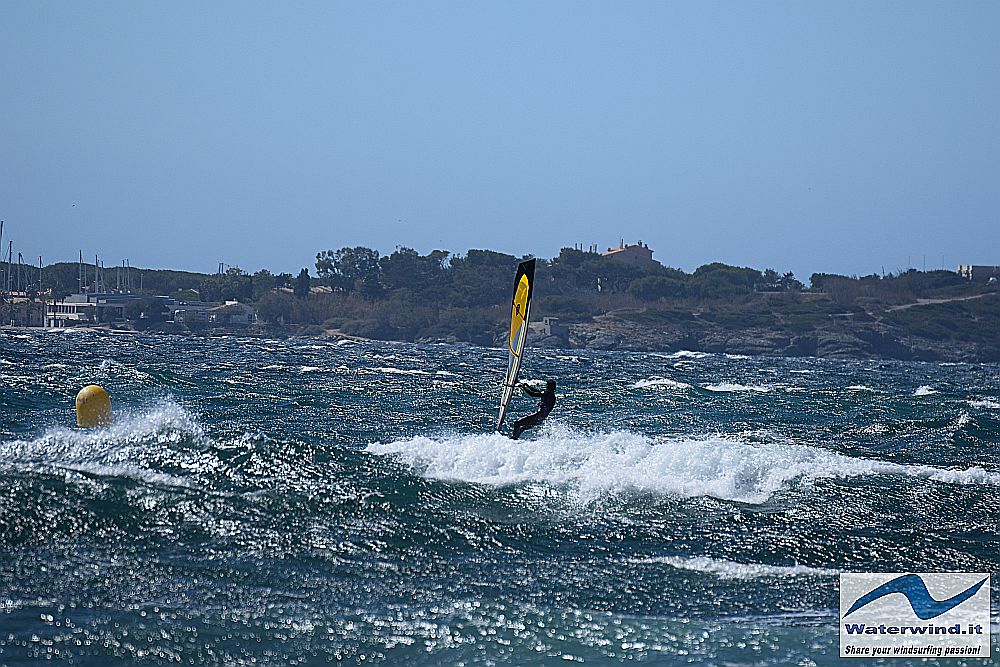 The first half hour in the water has been a great entertainment .... Perfectly trimmed with my sail, and at the top of my energies. The wind, in the late morning, was also slightly oriented more northward, a key feature to enable a first safe ride out towards offshore, without having to go too close to the dazzling cliff of the harbor. Soon, I began to sail at the area beneath Cap Negre where you have best waves to surf, and, with my great satisfaction, I closed a few jibes, coming down from the wave. In the center of the bay, the usual adrenalinic jumps on the 3-meter waves. After half an hour, the wind started to strengthen, and I realized that I was starting to be no longer in control (I rode with the sail open...). But I have to say that this was also the first opportunity to appreciate the advantages of a 4 battens sail in these conditions compared to a 5 battens sail (in the second part of the session - see below - I used an Ezzy Tiger 4.2, which is a 5 battens). In fact, the 4 battens deform more significantly (less profile stability), discharging much better the sudden wind gust that invests the sail on the wave peak. 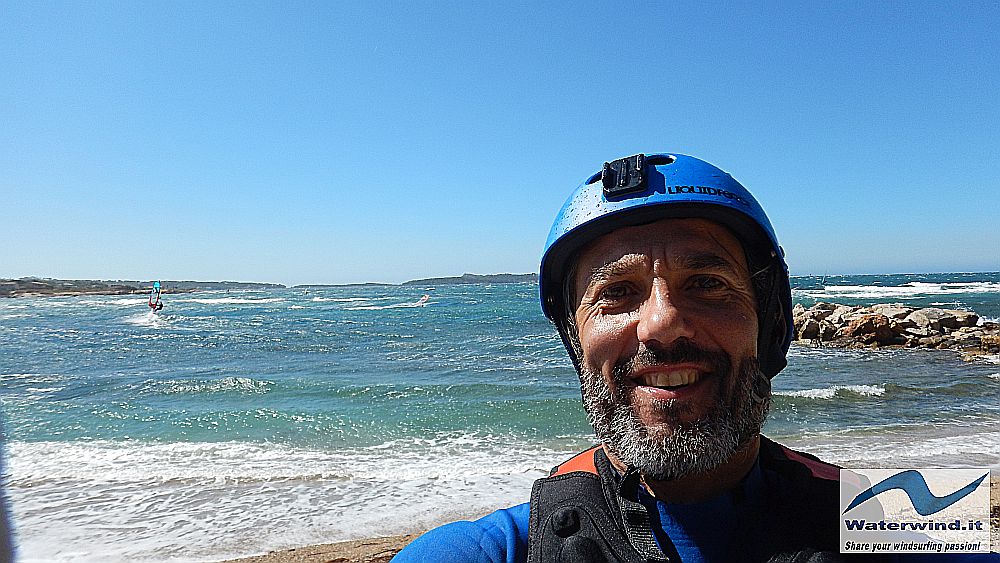 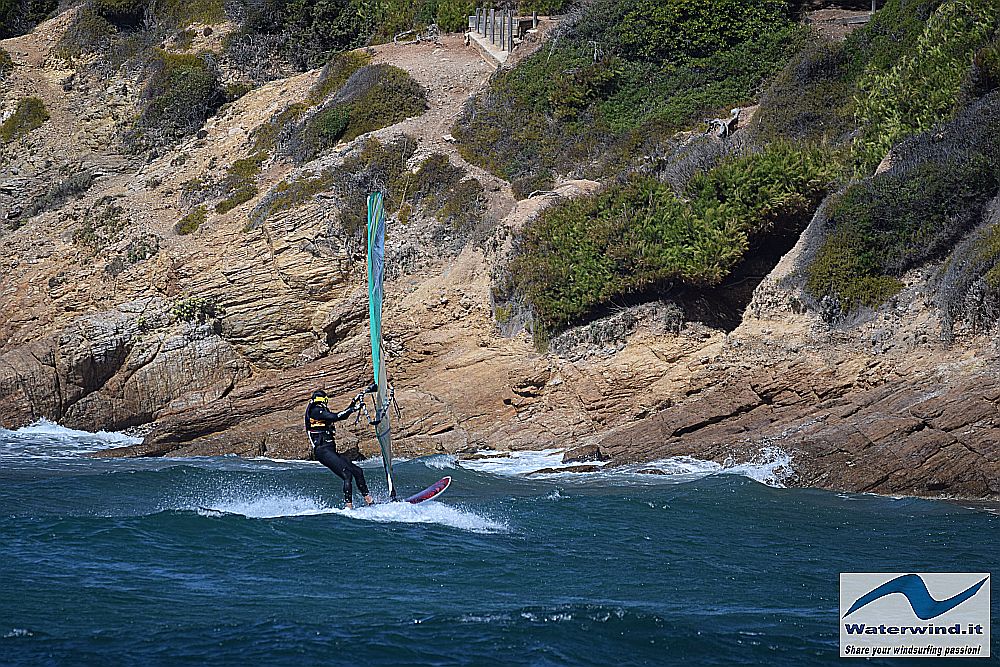 At Coudou you can not afford to reach your limit, if you do not want to complicate your life. So I sailed another half an hour, but then I came back. At the beach, I took the chance of eating something, chatting a little bit, and making photos and videos (see slidegallery at the end of the article), going on the top of Cap Negre. in optimum position. 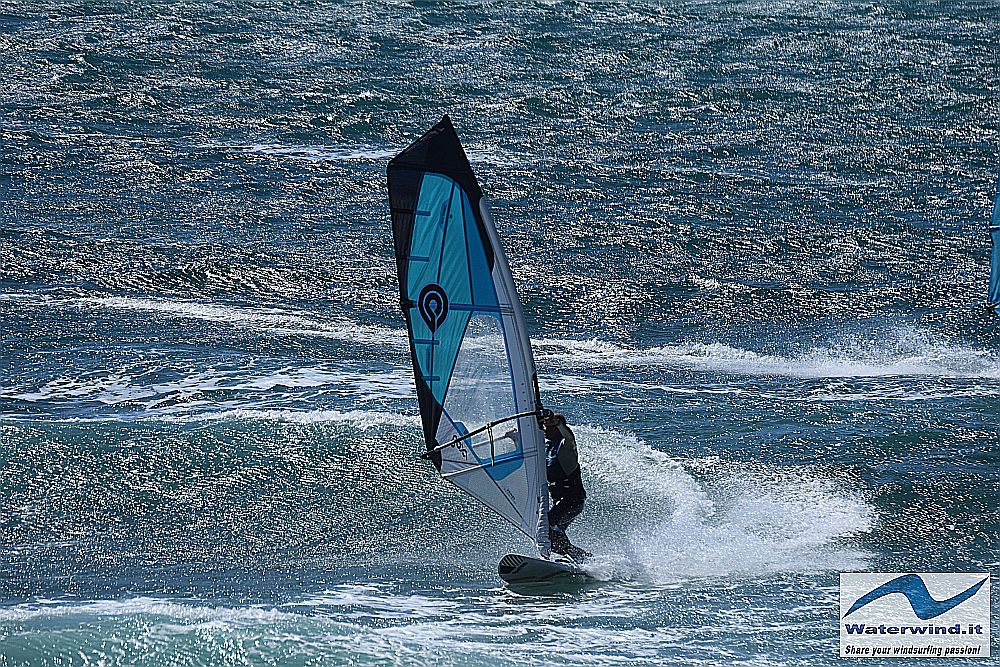 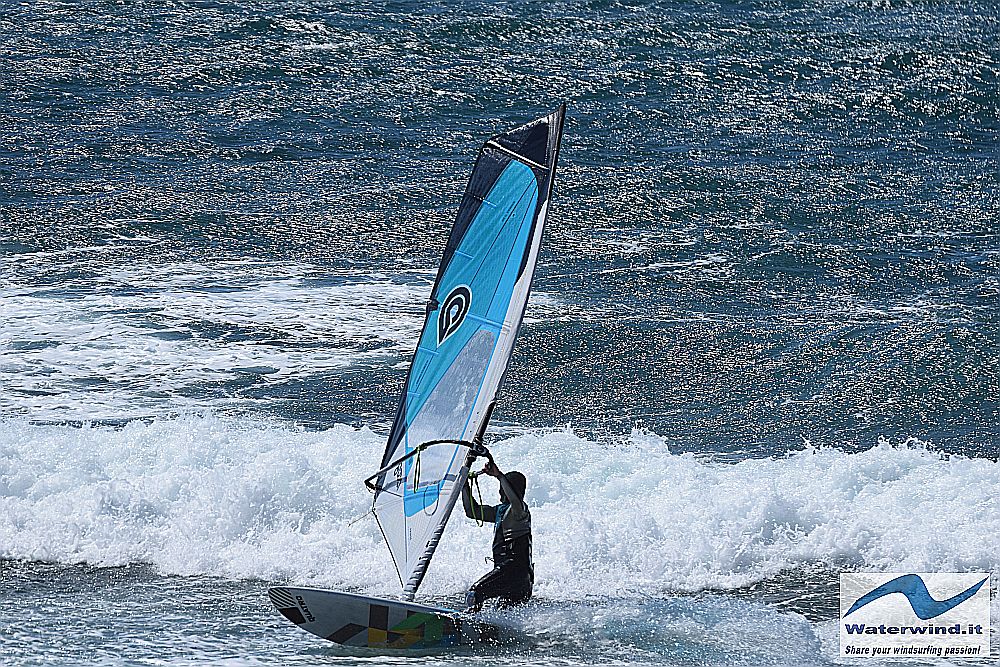 Just before 13.00, I decided to return to the water with a 4.2 sail. The wind in the meantime had undergone a rotation, becoming more from the west. Before starting, I watched the other riders coming into the water, at that time, and I had the bad feeling that getting early planing after leaving from the beach, this time I would end up straight on the cliff of the harbor. So, I decided to try riding upwind without planing once I left the beach. Wrong choice! As soon as I found myself in front of the harbor cliff (about 40 meters upwind, but, fortunately, right at the beginning of it) I found myself slow, not planing, at the mercy of the steep, powerful waves that rise there. I fell. But I thought sharp, and I did the right move. I did the waterstart on the fly, not to ride south (since I surely would end up on the cliff), but heading north towards the beach again. I got immediate planing, and after a few meters I came out of the danger zone, and I could also exploit the wind from the West to gain water upwind towards Cap Negre. So I came again to the beach, but this time I went upwind of the small breakwater cliff that is at the North of the beach. I restart from there (say about forty meters upwind of the point from where I started before), and I easily overcame the harbour cliff at full planing. Important experience for the next times. Once out, however, I soon realized that the wind had further strengthened, asking for a 3.7 (35 knots on gusts). I tried to resist a bit, as my friend Michele stood on the headland for some photos, but I managed to do very little. I have respected the rule that Coudou demands, and before ending my energies, I went back to the beach, as well as my friend Andrea, with the idea of ​​leaving some energy for an afternoon session at Le Brusc. For us, Coudou has to be tasted at small doses, and when it requires a 3.7, it is better to leave the battlefield for better riders. 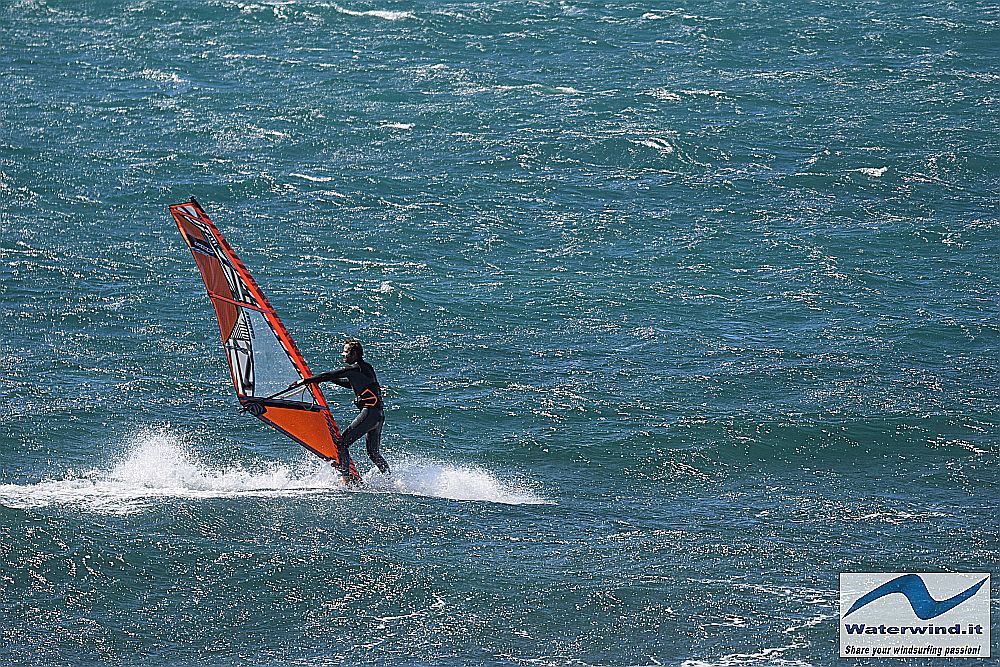 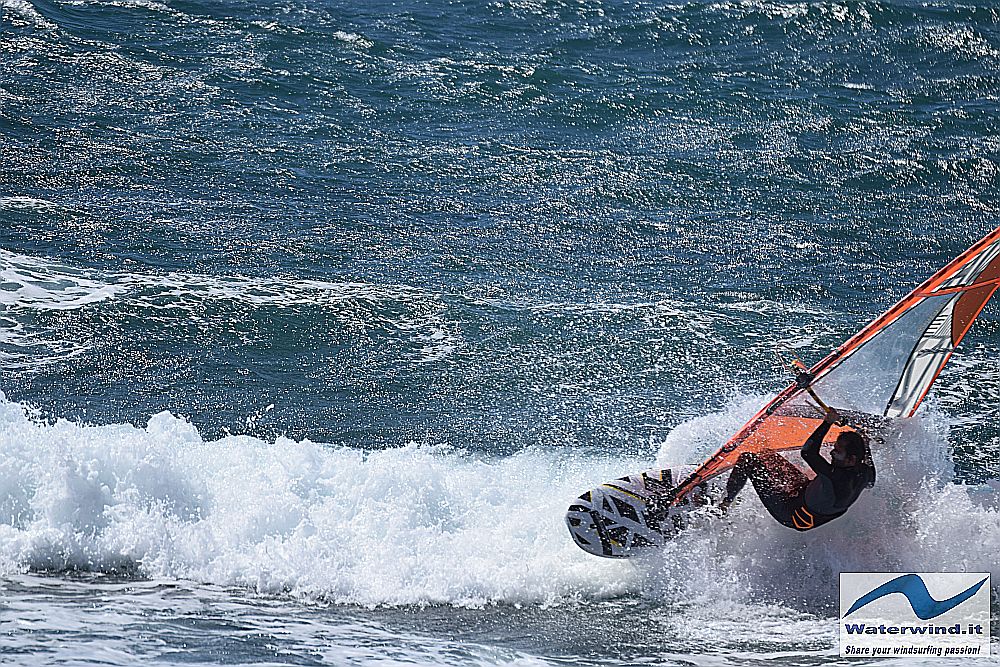 We ate a sandwich and moved to Le Brusc, Adrien Bosson's (F296) home spot, the world-class freestyler, that you will found at the La Cahute School.

Here the wind was strong (I immediately prepared the 3,7), but the direction was too much from the west, and the Island of La Tour Fondue disturbed the wind, making it unstable (gusts at almost 40 kts and drops to 20 ...): for the 3.7 quite not good. Adrien was training in the afternoon at the spot, making a show. 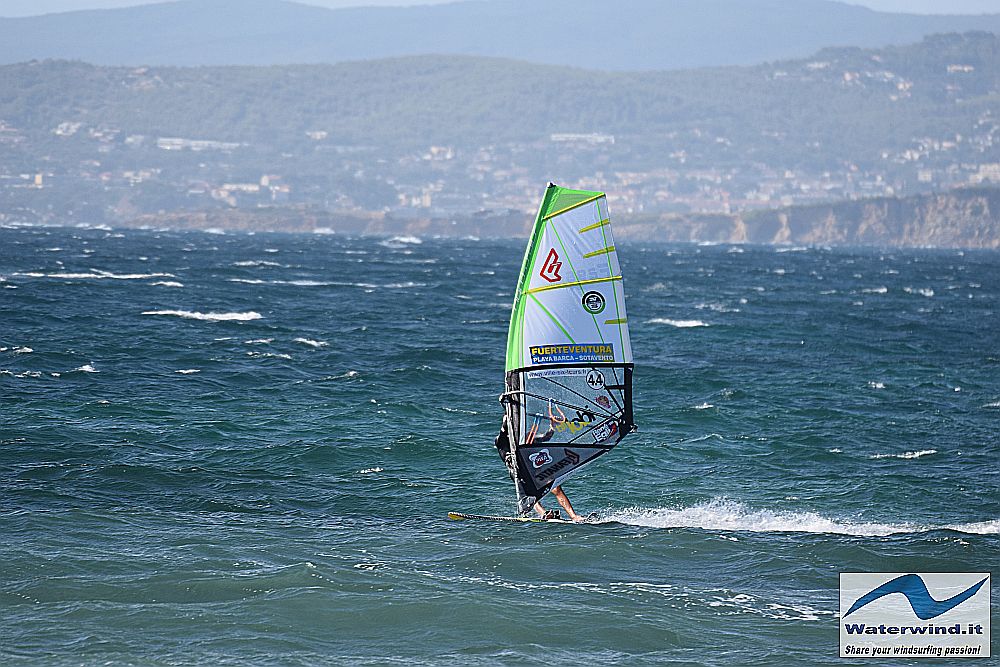 After an hour in the water (and a sea-urchin spike in the foot), I decided to end a day I will never forget ....