Shortly after Hyeres, in the South of France, proceeding westward, there are some good windsurfing spots: Le Brusc (Six Four Les Plages), Bandol, and La Seyne Sur Mer (Les Plages de Sablettes). Compared to Hyeres, they may offer the advantage of being a bit less crowded, at least in some days. Below, we propose a review.

The spot of Le brusc is located in a very beautiful landscape context (see map below), with the homonymus lagoon just to the south (windsurfing prohibited inside), which offers magnificent natural views; it is closed by L'Ile du Grand Gaou and the Ile des Embiez to the south and west, on which you can make great walks (or jogging in the morning, as we did).

You get into water at the beach (Plage des Charmettes, see photo below) just before the village of Le Brusc (coming from the north), where there is also La Cahute windsurfing school, run by the famous French freesyler Adrien Bosson, and sail towards the center of the bay, in the direction of the most famous spot in the area, La Coudouliere, where, with strong winds and with waves that become remarkable, the best French waveriders usually sail (Loick Lesauvage, and Thomas Traversa, to name a few). Le Brusc is an excellent spot for freestyle, freeride, and also for slalom lovers.

You get into water at the beach (Plage des Charmettes, see photo below) just before the village of Le brusc (coming from the North), where there is also a small school of windsurfing (La Cahute), riding towards the center of the bay, in front of other two mythical spots in the area, La Coudouliere and Brutal beach, where, with strong winds and waves that become significant, you can watch the best French waver (Thomas Traversa to name one).

There is a small breakwater cliff (see photo) just west of the beach where you enter into the water, to prevent shorebreak from rising with the mistral, and that simplyfies the start. Read also the report of a recent session (May 2017), in the spot with 35 knots from the west.

A parking lot, with a barrier with a height of 1.9 meters at the entrance, is located just in front of the beach; or you have other parkings always with the same barrier in the area just to the north or in the internal roads. Otherwise, you get the equipment discharged near the beach and park on the waterfront inside the village of Le Brusc (no barrier there). The parkings are to be paid only in the summer. 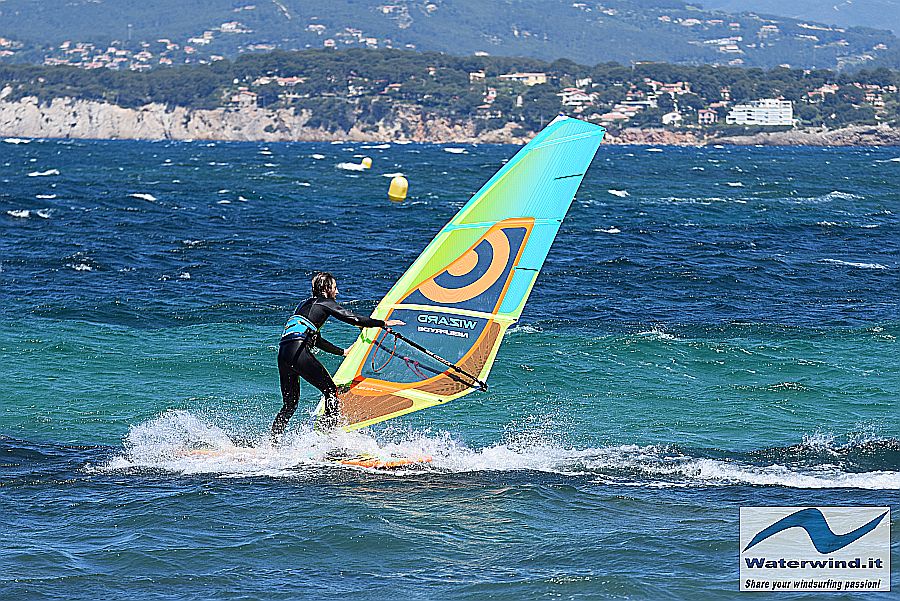 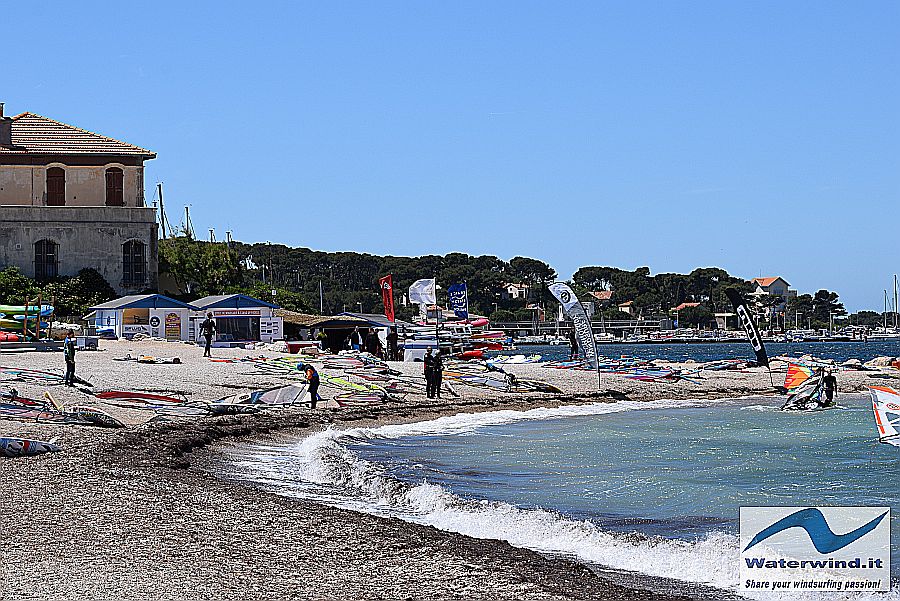 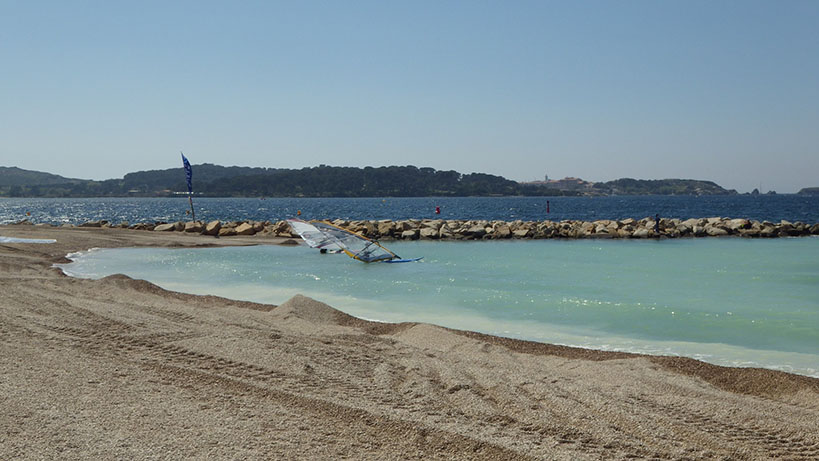 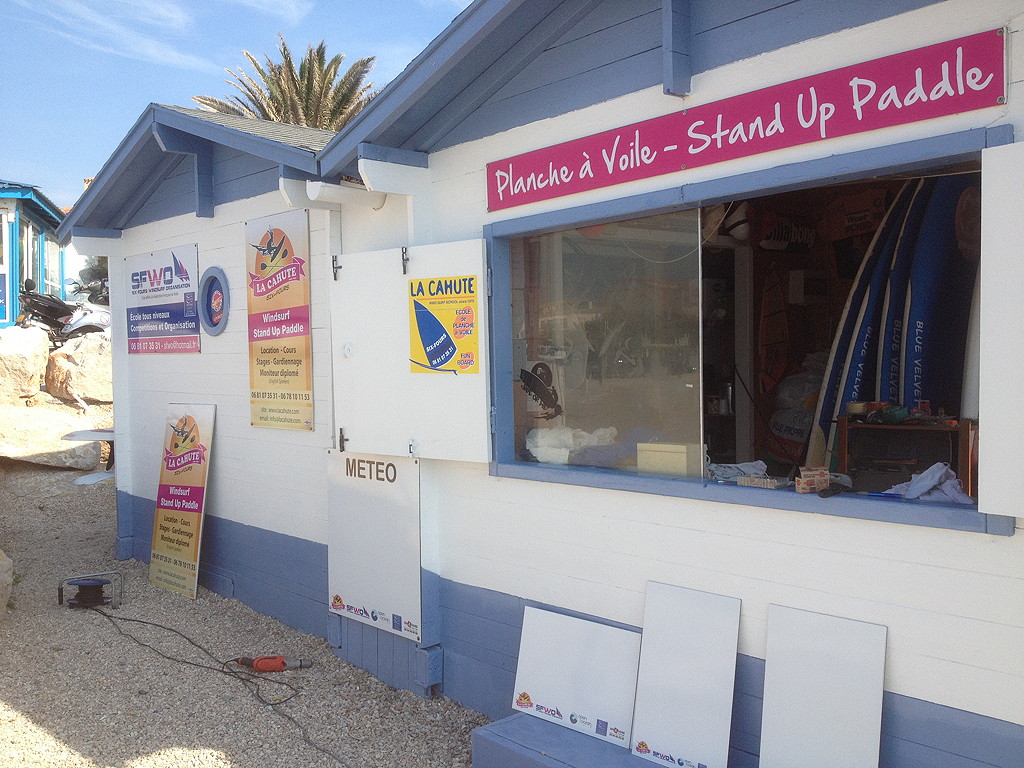 The day we tried the spot, for the first time (but then we went out many other times even with strong winds), the wind varied between 15 and 20 knots. We went out with a 6.3 sail and a 125 liter freeride board. In front of Le Brusc, with the Mistral at this intensity, the water remains relatively flat (but even with greater intensity the islands to the west make the water surface near the spot the remain quite flat, or with waves height within 1-2 meters); riding on port tack at the exit, and in a northerly direction, for the first 150-200 meters there are sandy beaches, apart from a stretch of rocky coast of about 40-50 meters, immediately after the beach from where you start riding, but with a shallow seabed.

In these 200 meters, as mentioned, the sea remains quite sheltered from L'Ile des Embiez to the west, which does not allow the formation of significant waves, and the spot can be considered safe (however, avoid the exit if you are a beginner with very strong mistral). But as you sail towards the Coudouliere, which is almost 2 km away, the waves rise significantly. For more information on the spot de la Coudoliere, read the detailed review, here on Waterwind. With Mistral at 25/30 knots and beyond, just do not go, on the rides towards the North, too far towards the center of the Bay, and therefore in front of the Coudouliere, where wind and wave are undisturbed and there are almost only rocky coasts to leeward. How far to go towards the center of the bay depends on your abilities, and if you don't feel safe, it should be enough to stay in front of the small beach of Le Brusc, or ride towards the lagoon to the south (but without going too far into it because windsurfing , as mentioned, it is forbidden there), where the water level remains flat even with strong winds (downwind there is a small harbor with a pier, but it is not a particular problem, also because the seabed in front of it is shallow). Just pay attention to the ferry that leaves for the islands!

To stay in the area, we booked an apartment ( 400-600 euro for a week during Easter period) through the web site www.mediavacances.com , which offers plenty of choice; but you have also other possibility. 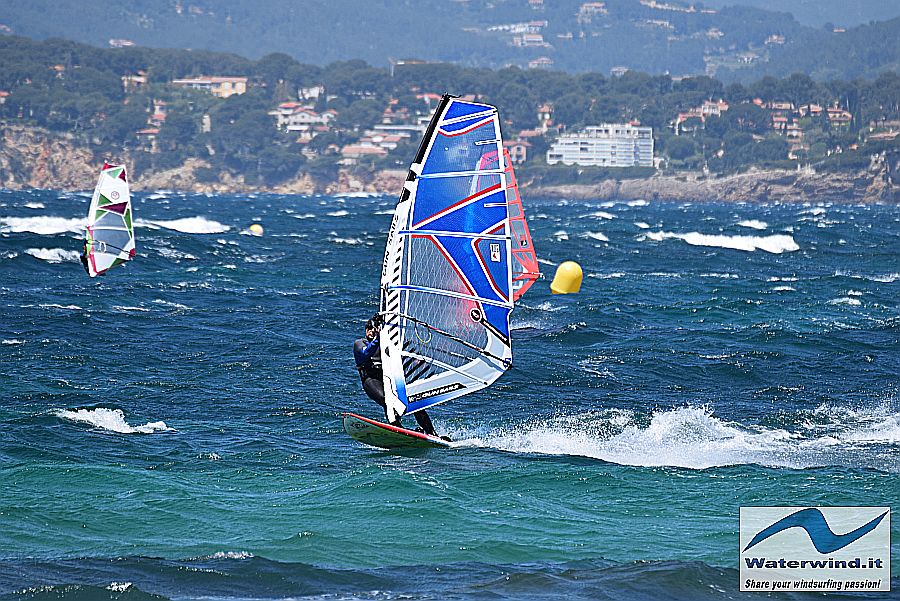 We haven't tried the spot of Bandol yet, but we've gathered a lot of information, and scoured it several times. The spot gives its best for waveriding, when the mistral blows from NNW and very strong. At the Coudouliere there are 40-50 knots, and it is almost impossible to go out, if you are not Thomas Traversa. In Bandol, there are 10-15 knots less, the wind enters side, and very nice and orderly waves enter the bay. If the wind is blowinf from NW or W, it enters rather side-on / onshore here. 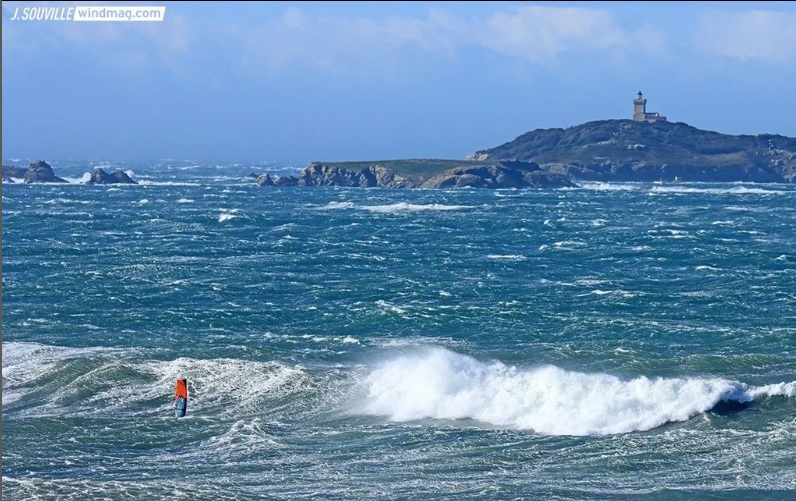 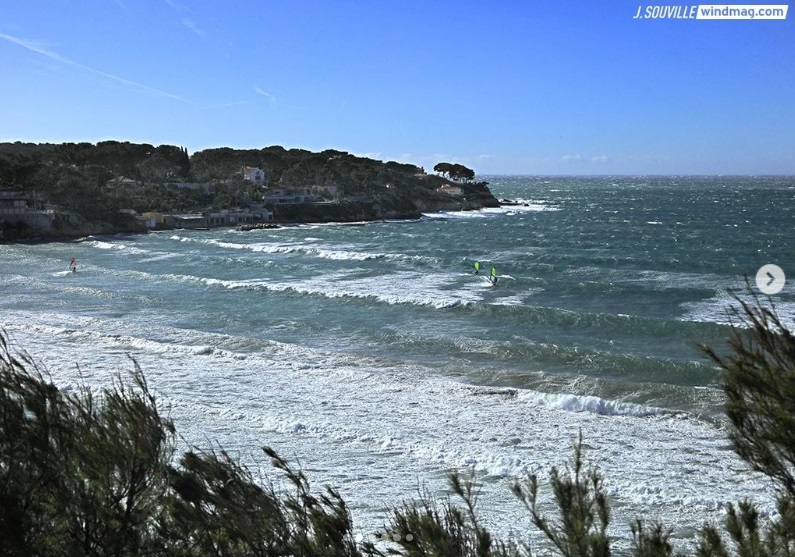 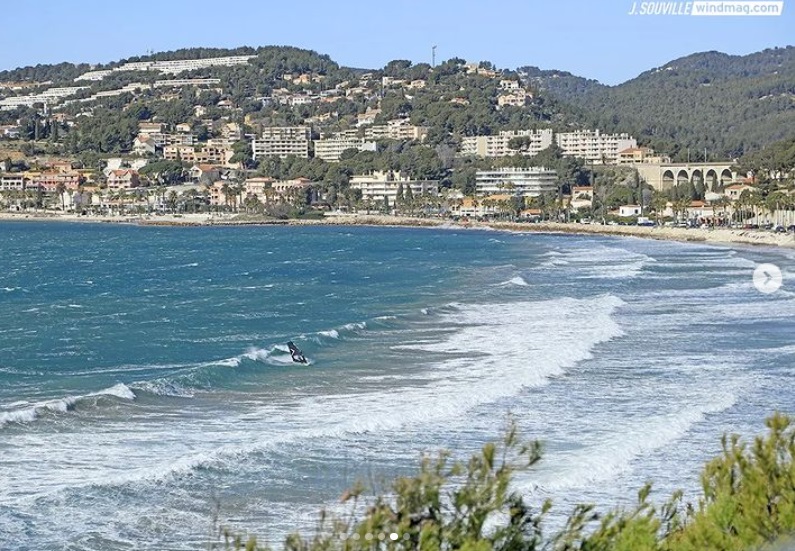 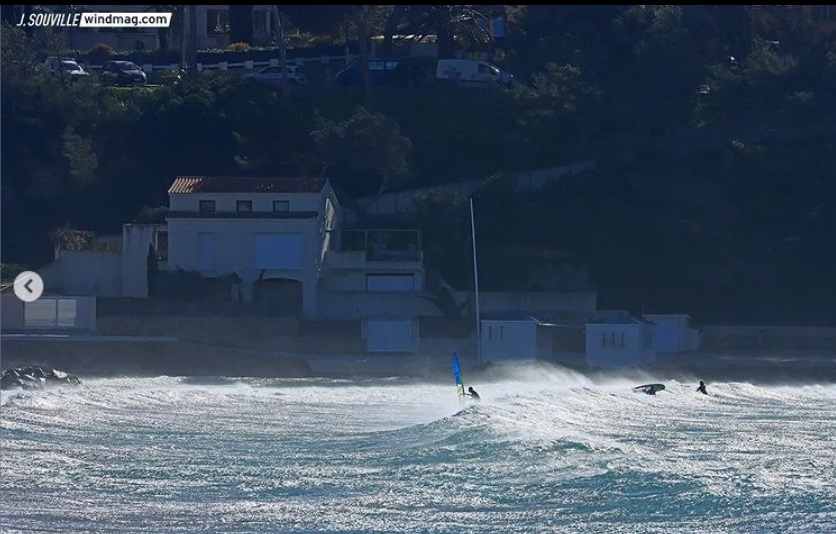 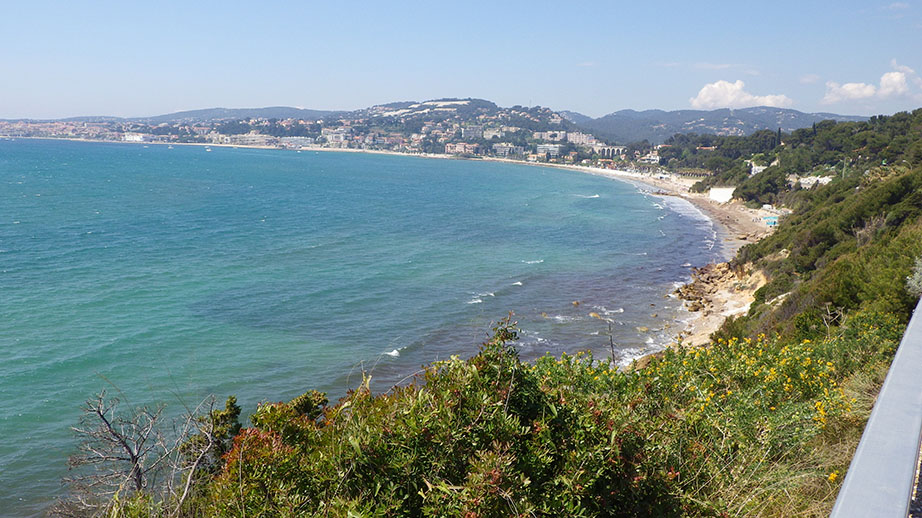 The exit points are: the beach in front of Avenue de la Liberation (photo at right), before an ascent to begin, ad the road to change its name in Route de Bandol (already in the town of Sanary sur mer, to say the truth). See the marker in the map below. In this case, there are limited parking facilities on the waterfront or on the opposite side of the road. Otherwise, you discharge your equipment on the beach and you go to look for parking.

Alternatively, you can get into water from the beach further east at the end of the Avenue du Prado (photo below, here we are in Sanary actually), as shown by the other marker in the map. Even in this case, limited possibility of parking near the exit point. 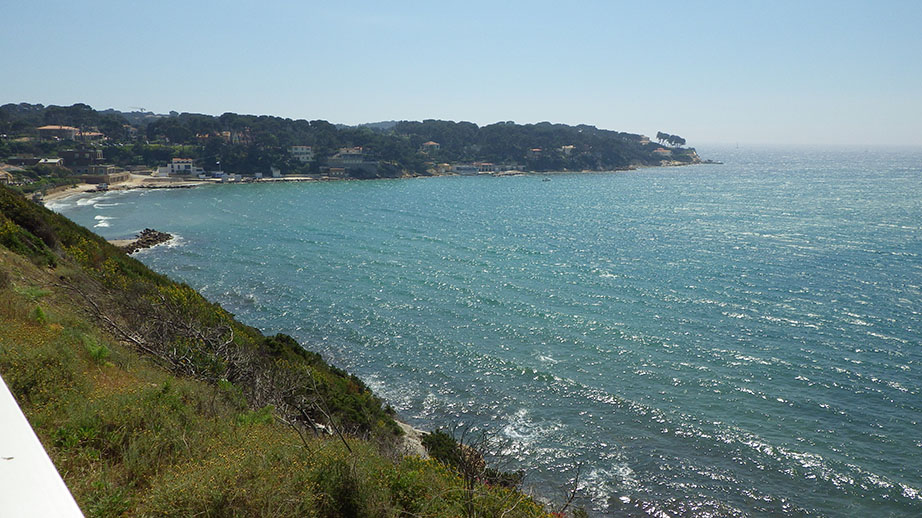 With mistral (NW), or west wind around 20 knots, it seemed to us that we could enjoy ridings between the two exit points indicated above, in a direction parallel to the coast. Upwind, there are other beaches (not easy to reach because the road remains higher), or short stretches of cliffs. In such conditions, the spot seemed safe even for those not particularly experienced.

We did not tried also this spot, but we only scoured it, because, when we visited the place, there were no optimal conditions (unstable wind). 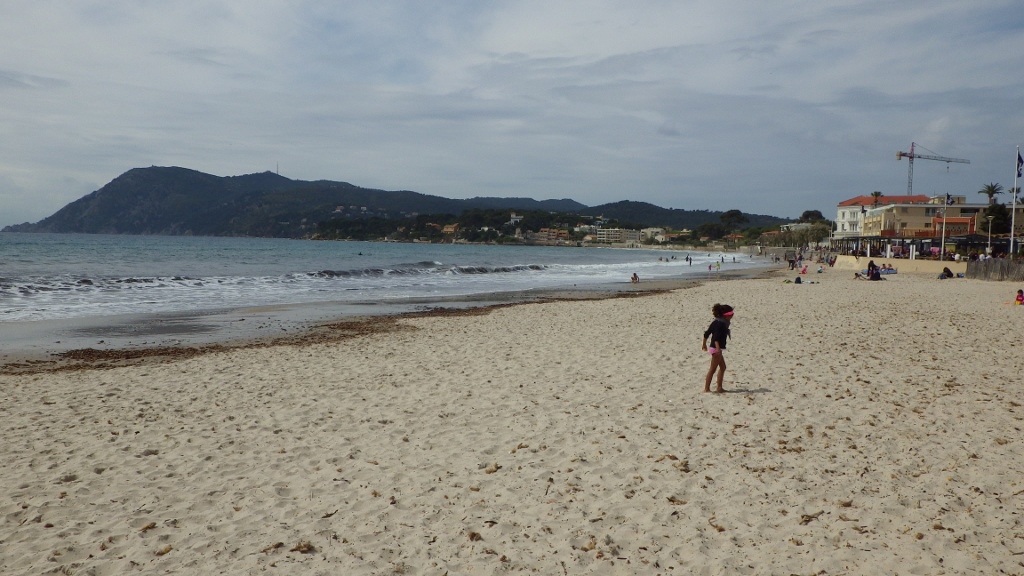 Here, you get into water at Plage de Les Sablettes (see map below). In the summer, the signage on the spot (2014) means that you can only get out for windsurfing from the East and West end of the beach and not from the center. Parking is available in the surrounding streets and along the waterfront; there is also a large parking lot between Voie du Bali and Rue de St Mandrier (with usual bar at 1.9 m at the entrance). Behind the beach there is a large pubblic garden with lawn and playground. The beach and the seabed are both sandy and stretches of cliffs / rocky coast are only at the east and west of the bay, that is very large (almost a km).

The bay is exposed to the South / Southwest. Thus, the winds that work best in the spot come from those directions. With a North-East wind, the spot should provide good conditions suitable for freestyle, as behind the beach, in this direction, the coast remains low. 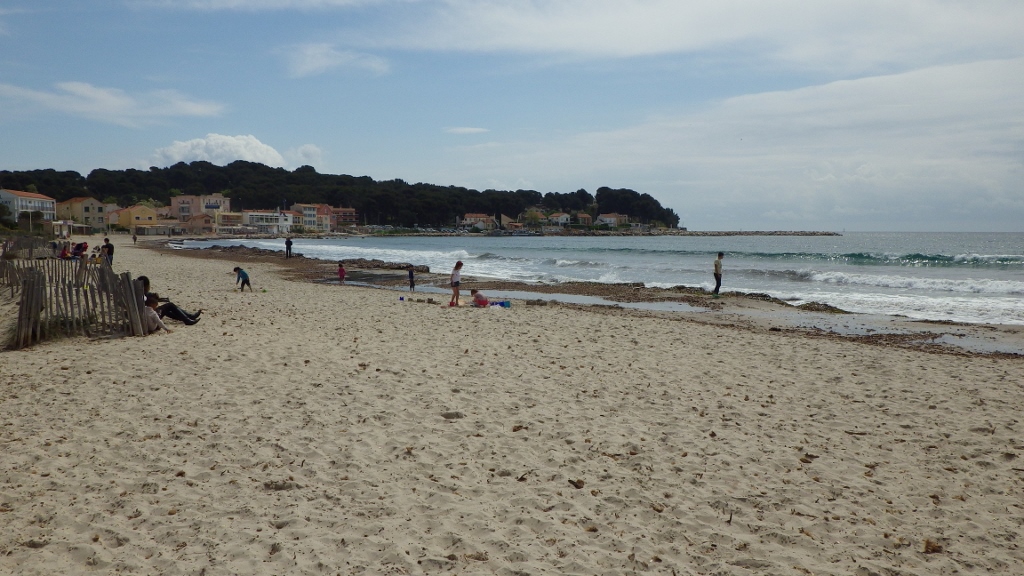 The day when we scoured the spot, however, the wind was from the East, and under these conditions the headland to the east of the bay disturbs the wind very much, causing, at least close to the shoreline, the wind to be very on-off. Off the shoreline, probably, the wind from that direction should be less disturbed and more spreaded. Mistral and Tramontana, because of coast morphology, however, can not enter here.

More comments by surfers who have tried the spot under various conditions are welcome.