The 8th of july 2018 was a beautiful day of windsurfing at Lake Como, warm and sunny, and that gave us a Breva wind of good quality, even if almost unexpected.

Last Sunday was a busy day for me, which started at 4.50, with an early wake up for the heat. Anyway, it slightly anticipated the planned wake up to take the Tivano (early morning Como Lake thermic wind) in Valmadrera. Unfortunately, the Tivano, this time, was a big rip-off. The wind from the east, in the plains at South of the Lake, made it almost immediately finish, as was for the Peler (the similar morning thermic wind) at Garda lake.

East wind in the plains often means a good quality Breva (the thermic wind of the afternoon). Therefore, I moved early to Gera Lario (Northern part of the Lake) to enjoy the possible wind in the afternoon.

And, infact, Breva wind at Gera was really nice, both for the quality of the wind, and the weather conditions very pleasant (now, you take the bath without problems), and also for the excellent company of fellow windsurfers present at the spot, which is always a great added value for the day. 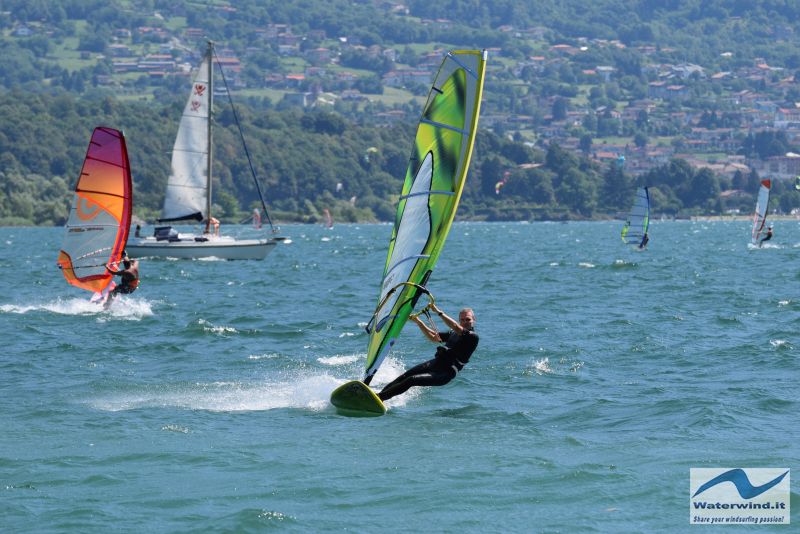 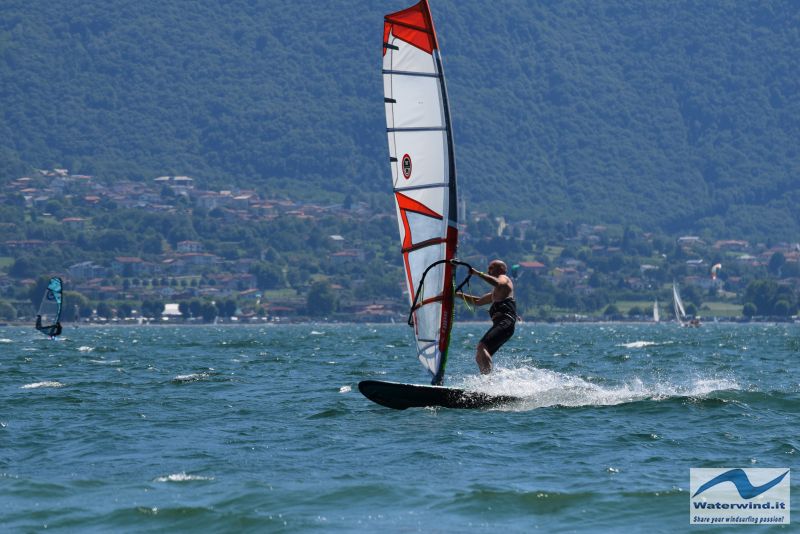 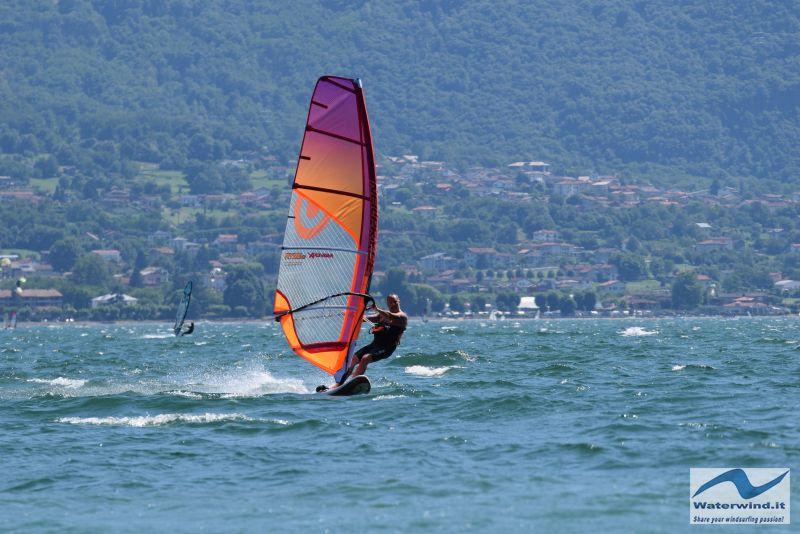 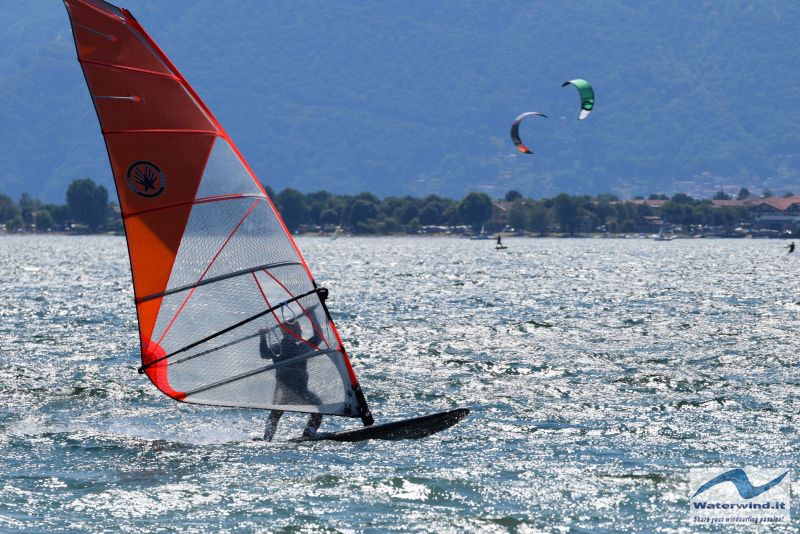 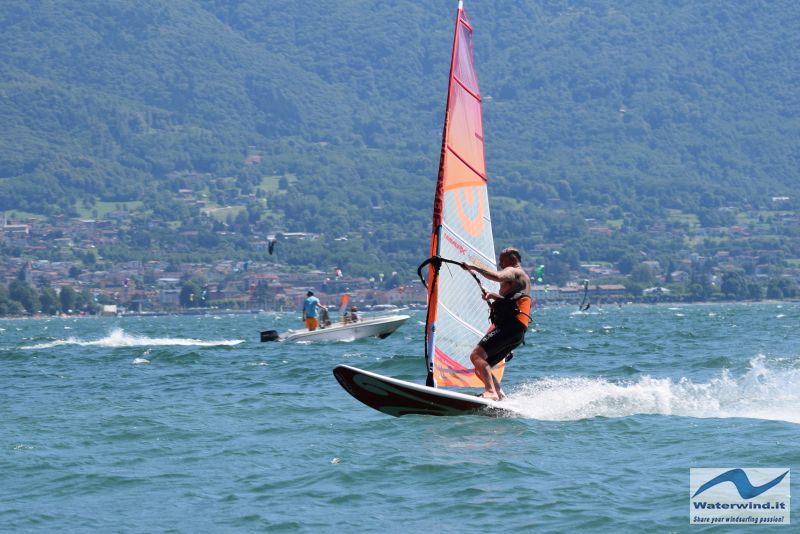 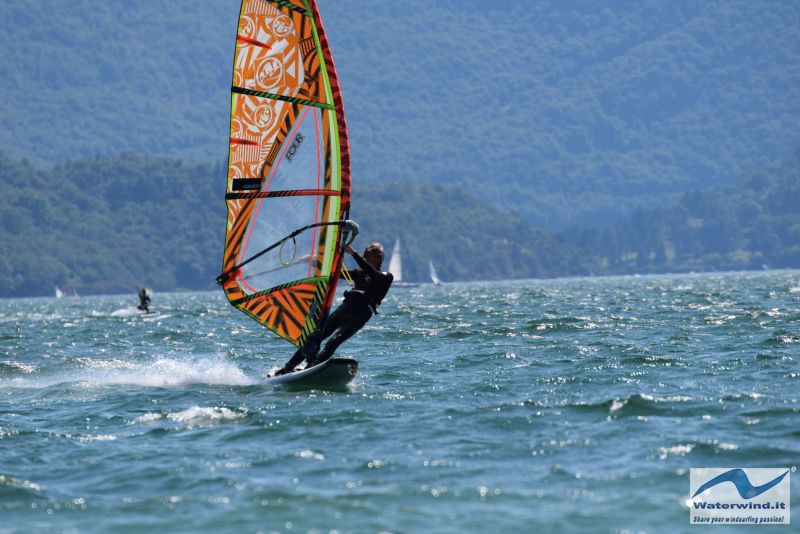 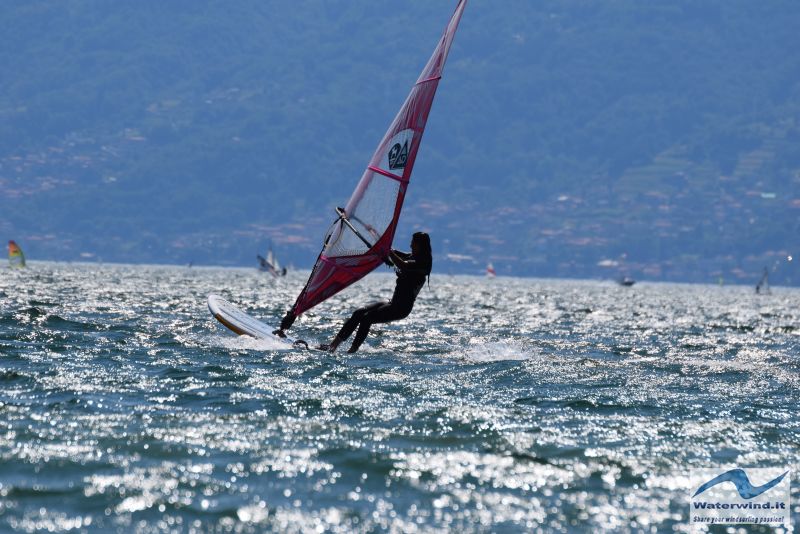 As for the report of the day, the Breva began to blow slowly and almost late, when the veterans began to portend a sluggish day. And instead, after 13.00, the wind began to spread out over the lake, uniform, and more and more strong, until, from 13.30 onwards, steadily exceeded 15 knots. The pleasant aspect of sunday Breva was the fact that it did not result too much gusty, as often happens, but also in the intervals between the gusts, it was of good intensity, and able to guarantee the stable gliding from coast to coast. On the bursts, the wind reached 20 knots. The thrust of the east in the plains always makes an important contribution.

I used the Tabou 106 3s LTD, and the Ezzy Zeta 6.4, with a nice belly, and with a tight leech, not expecting (given the slow start) a special day. At the best time of the afternoon, I clearly was overpowerd with the 6.4, and 5.5 would make more sense. But the situation has never been unmanageable. Only the water surface was rather choppy (even if not impossible): the sunday traffic of motor boats, and the presence of many kiters and windsurfers in the water, has often created those conditions of crossed chops that I hate (and so do my teeth .....).

In the first part of the session, when I was less tired, I maneuvered quite well, managing to close a bit of fast tacks (and also on port tack, my weak side), despite the weight of the sail, and the chop, which soon stopped the board, when pointing into the wind. Even the jibing went well, even if the conditions of the water surface, near the port of Gera (where the water, at times, becoms flatter), made the maneuver almost a rodeo test. Unfortunately, the Duck Jibe have not entered. Maneuver to study better.

For the rest, I consolidated the gliding technique, with the back foot off the strap to lighten the stern. You have to pay attention that the chop does not give you a throw you in the catapult, but it is a technique that pays a lot in terms of close-hauled sailing. The Tabou 3s, a fantastic board, those the rest, and maybe my friend Nicola is right: before selling it for a fsw board, a little more wave oriented, it is better to think about it ... 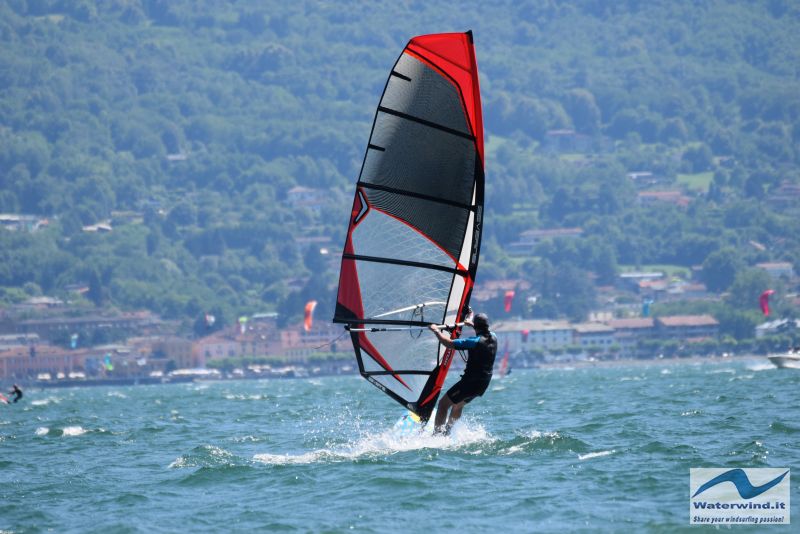 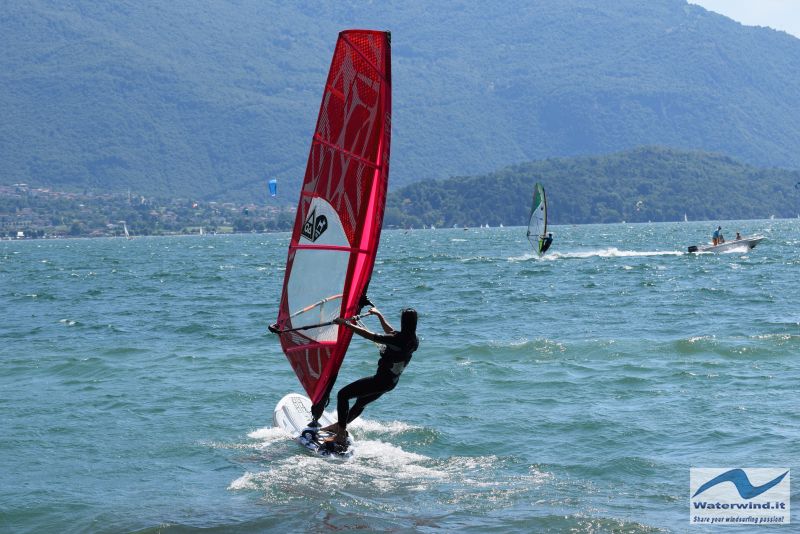 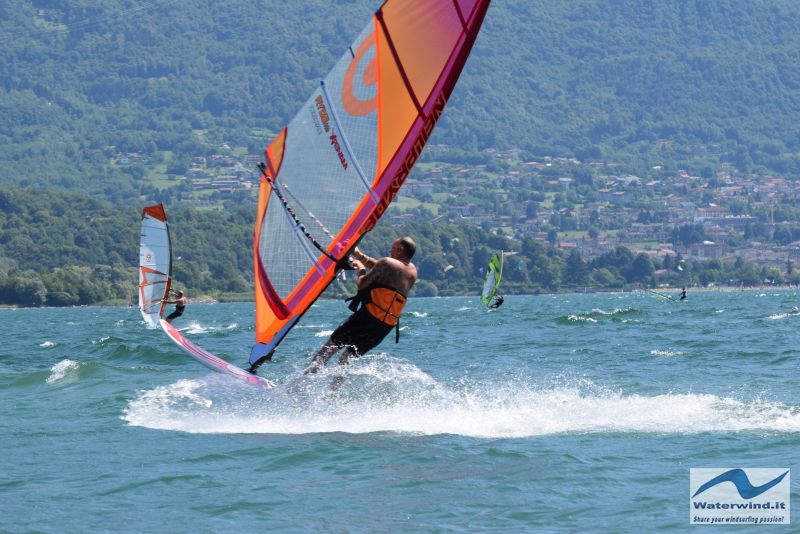 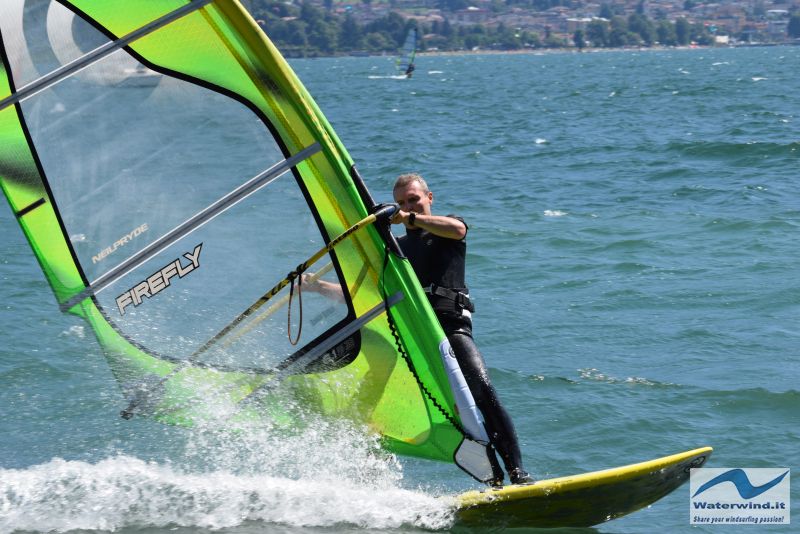 I cautiously went out with the 3/2 mm long wetsuit, and I felt a litte hot sometimes (but on Lake Como, windsurfing, nobody ever died for heat ... and I can not stand to feel cold while riding). To be noted, however, that there were many bare-chested windsurfers, and not only among slalom riders, and may others with shorty. 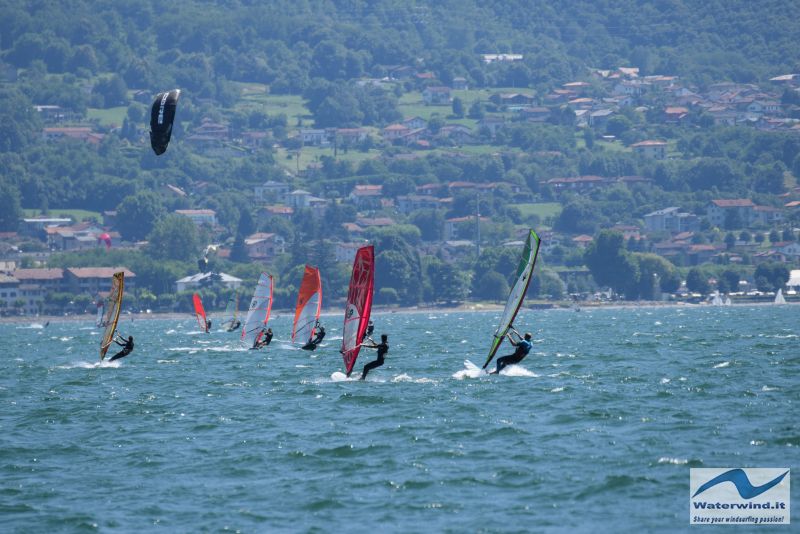 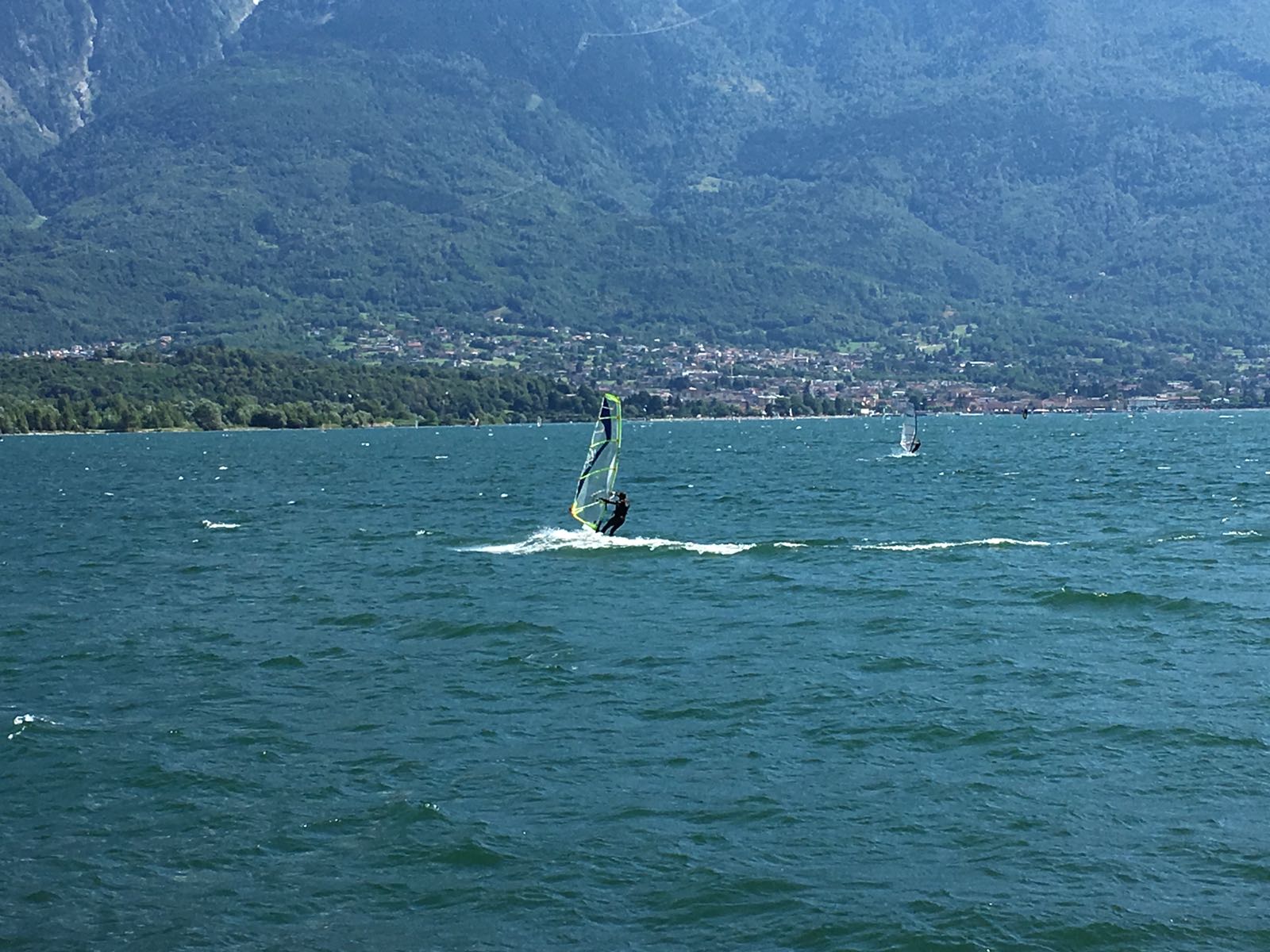 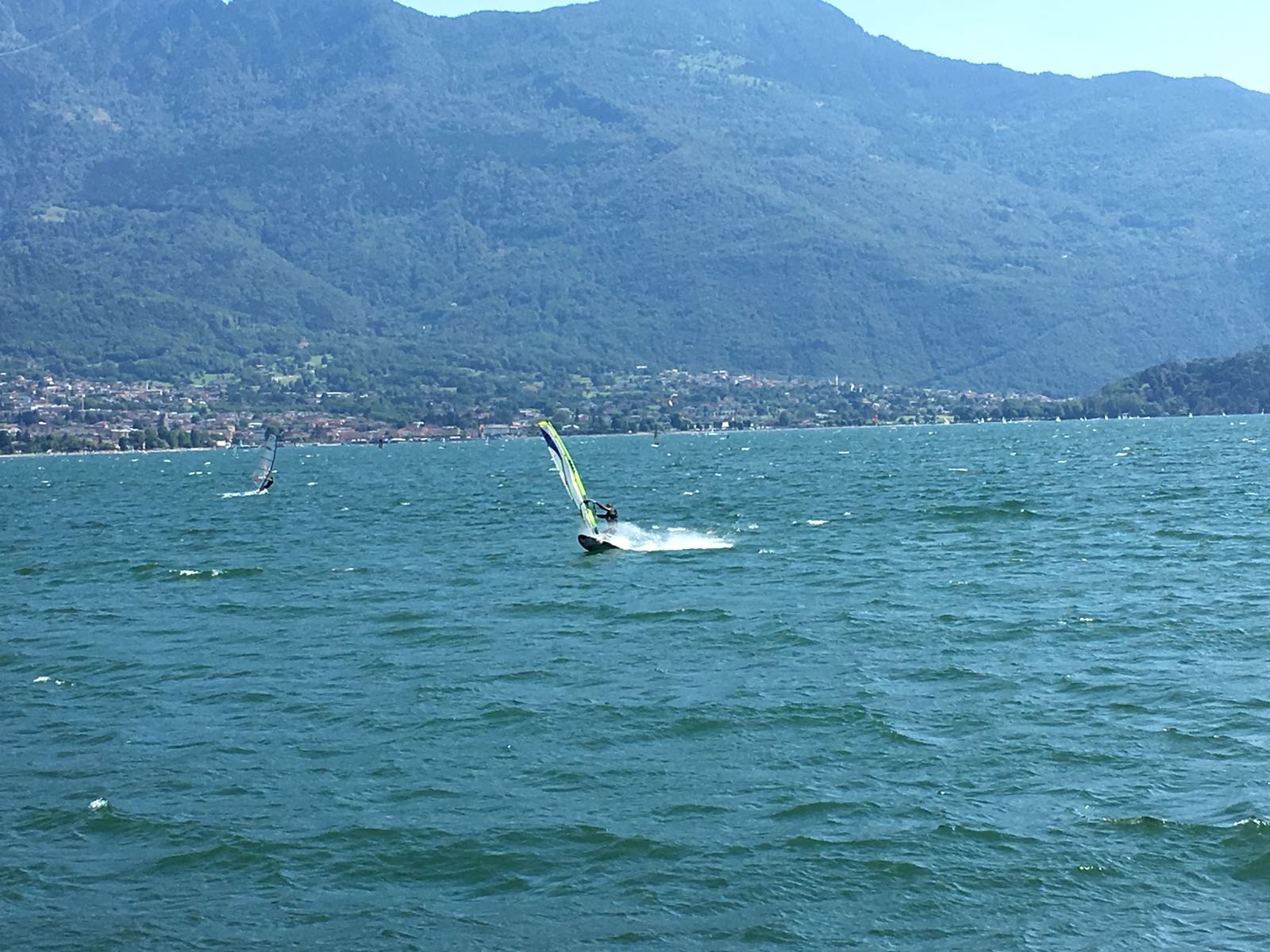 Paolo from Lecco, well-known expert windsurfer of the lake, was already ready to bewitch us, all the afternoon, with his legendary tales of windsurfing. But, at a certain point, he had to interrupt his second sport, "talked windsurfing", and he also entered into the water with Ezzy Taka 5.3 and the Quatro Thruster (how many liters?), showing to everyone how to get planing with 18 knots, if you weight 84 kgs, a 3 battens 5.3 sail and a wave board, are enough, with no need for huge sails.

It's a lesson on which I am reflecting more and more, because the lesser handling of a 6,4 sail, due to size and weight, is becoming unbearable for me, and I'm meditating to pass to freestyle sails of about 5,5 meters, as larger sails for me. 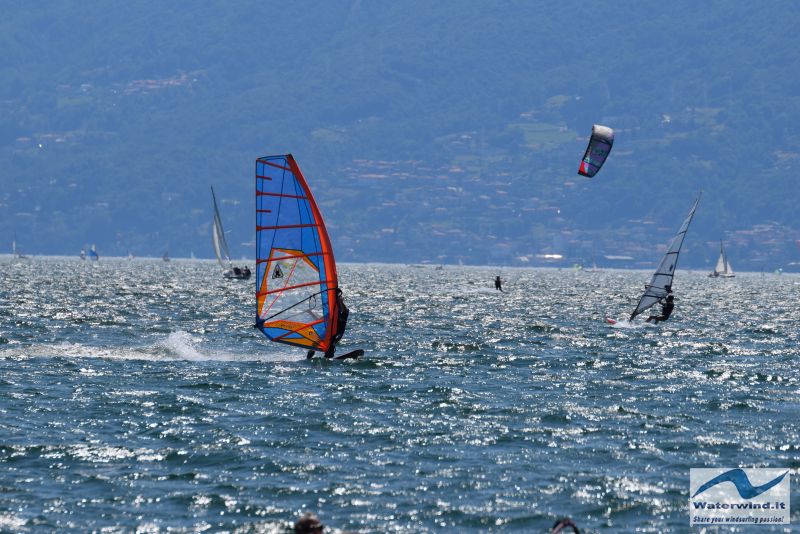 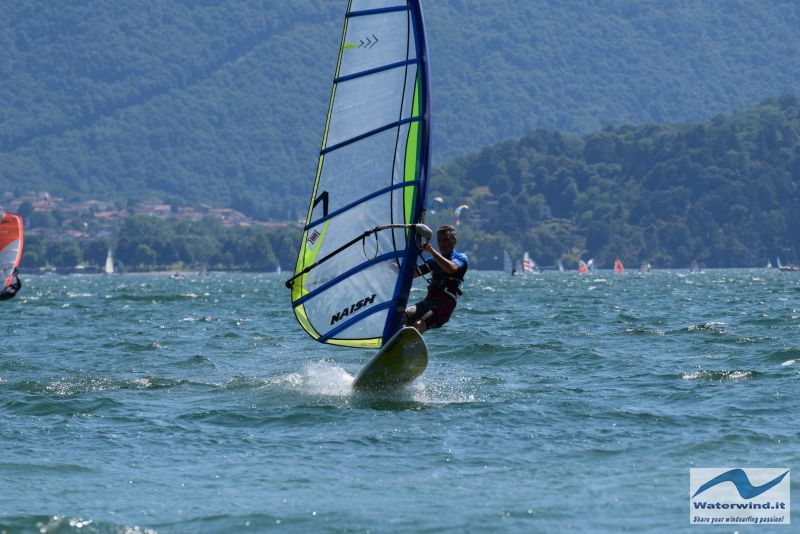 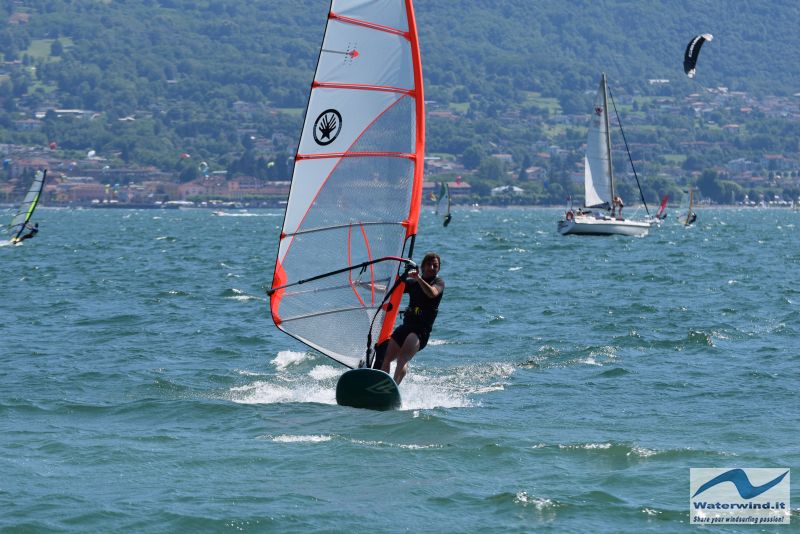 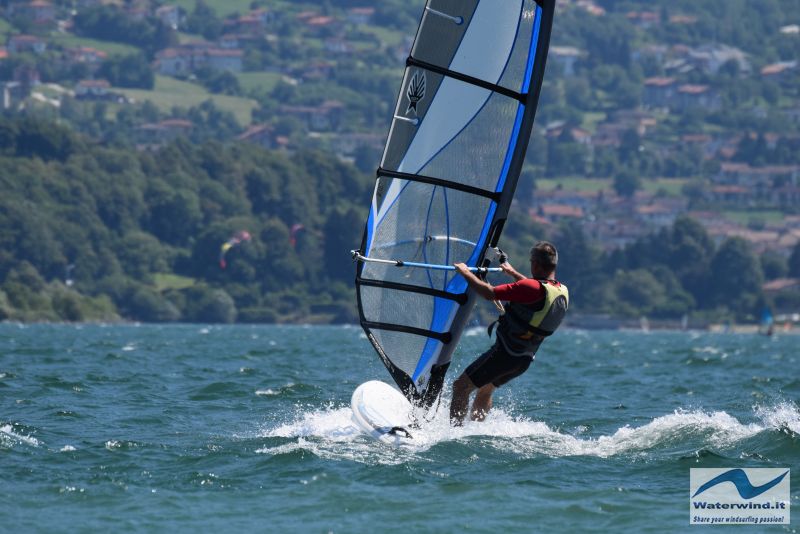 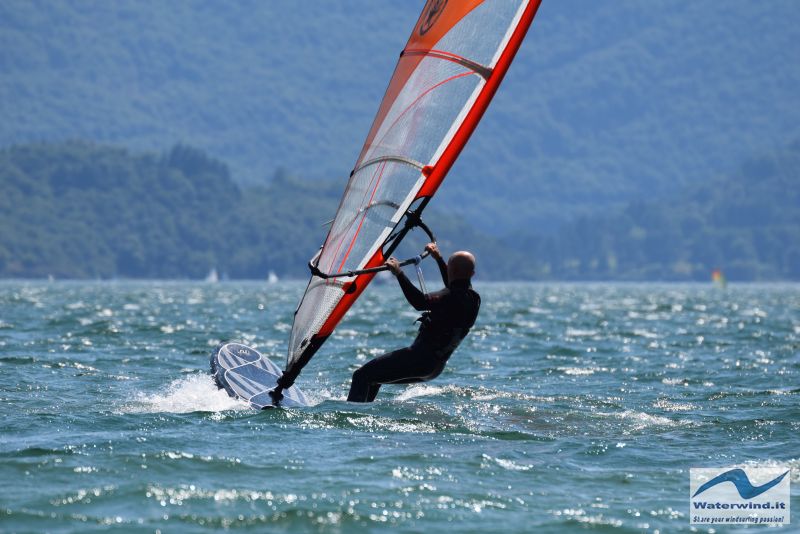 For a while, the undersigned will not frequent the lakes anymore. On July 13, I will leave for Portugal, and the next news will come from there.

Clicca qui, for the complete slidegallery of the day.