Strange day at Garda lake, yesterday. Forecasts were not confirmed, and the wind did what it wanted, all day long. But Garda lake never betrays us, and, in fact, we were able to surf for more than two hours at Pier with Ora wind.

Short Peler in the morning, that did not reach Prà de la fam. It blew very well on the east coast of the lake (they rode with small sails in Malcesine), while on the west coast it reached only Pier and Limone del Garda (where it is not that easy to enter into water, cause there are few comfortable beaches where to park near the shoreline). 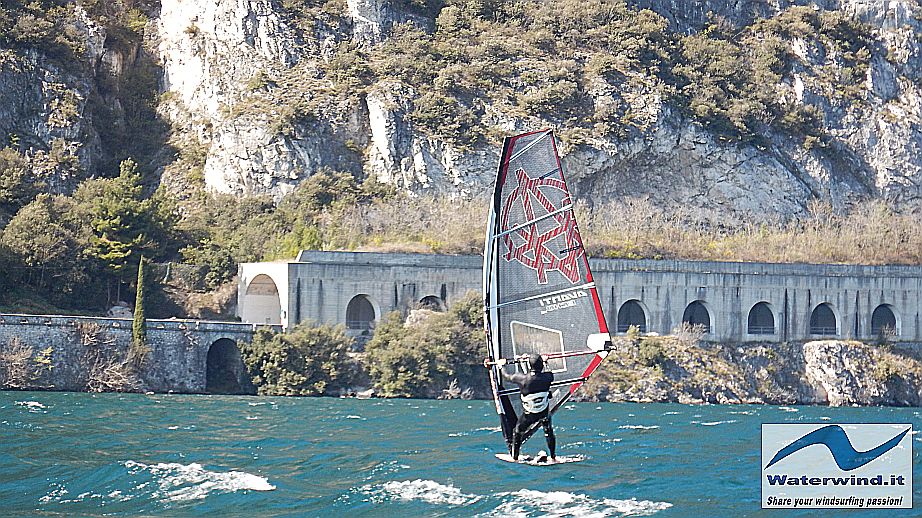 Some friends have ridden for more than an hour at Pier, with 4/5 meters sails. 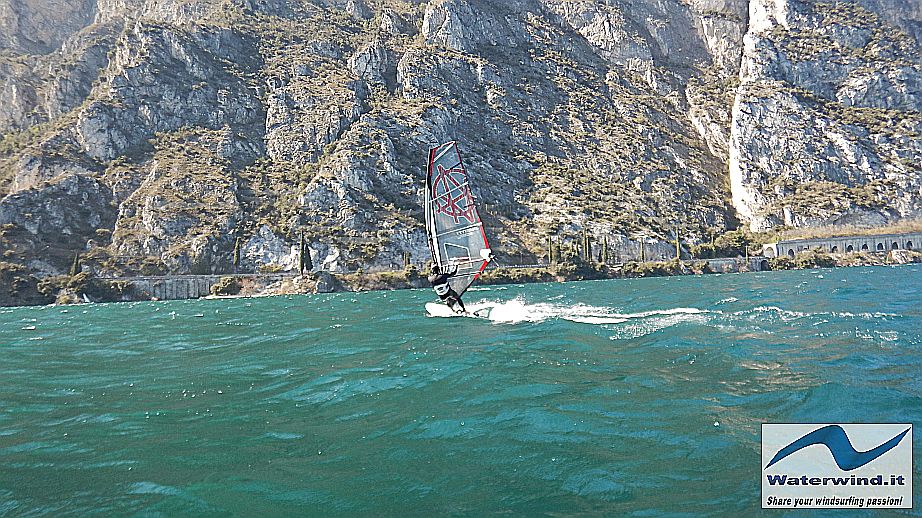 So, we gave up surfing with Peler, and tried to get Ora wind at Pier in the afternoon. Very enjoyable situation at Pier, with few people, lot of space for everybody, sunny and warm day (25 °C degrees), and no entrance ticket to pay yet!

Ora wind began to blow late (about at 13,30), and only at 14,00 was quite well spreaded over the spot, with most riders that were beginning their session at that time.

I got into water with my Fanatic 105 freewave, that I tried to match with my Ezzy Elite 4,7 (4 battens). 5 mm wetsuit, gloves and surfing shoes. Water is still a bit cold.

For about ten minutes, Ezzy 4,7 proove to be quite good. Nice to have such a light sail in my hands. But, unfortunately, soon it became too little powerful (moreover, for bump and jump and gusty conditions, a 5 battens would be better).  I came back to the shore to change for an Ezzy Tiger 5,5. 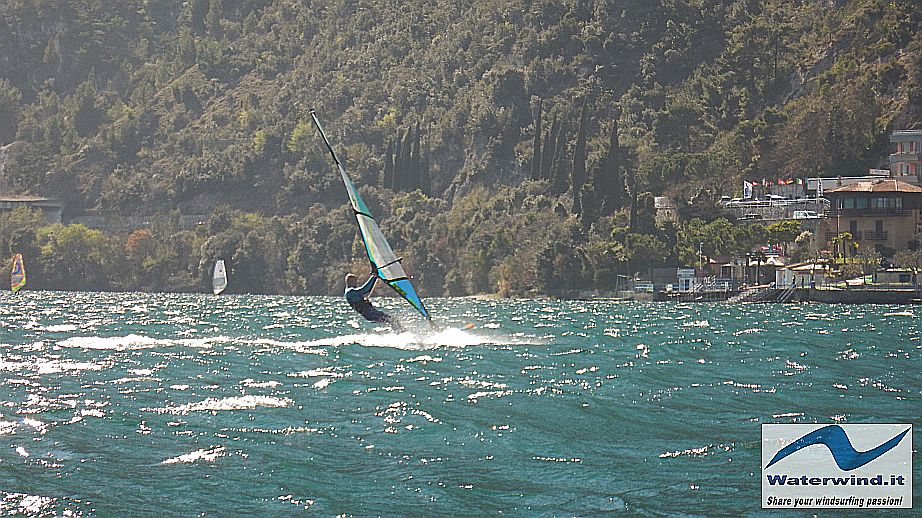 With that sail, things went much better, even if it was not one of the best and most memorable Ora wind. Wind was not constant over the spot. Strong near the shore, low in the center of the lake, strong again from the center towards the opposite shore. Anyway, it was good to have some training for more than 2 hours. Fanatic freewave seemed not to love those conditions, though. It has, in my opinion, a shape more oriented to waveriding, with volumes mainly distributed around the center of the board. It likes strong wind to get stable planing, and it doesn't like overpowering, which makes the board become less under control. In the lulls, it easily looses planing. 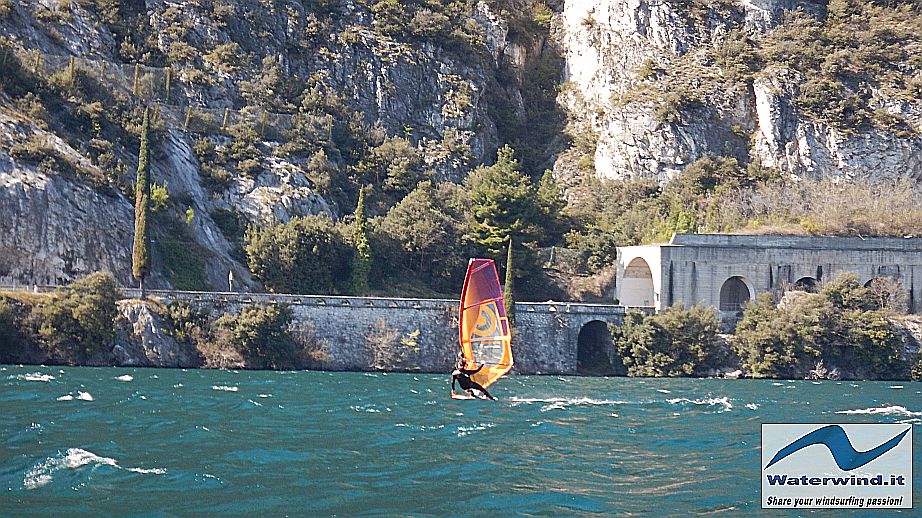 I rode most of my time near the "Maiali" rock with my friend Michele, equipped with a Severne Freek 4,4 and a Starboard flare 91 (then he switched to a 4,8). Suddenly, also Claudio (Bertagna), Simmer agent for Italy, appeared (see video), with a Simmer 4,8 Ace, and a Simmer 93 freestyle custom board; as always, he gets planing at full speed in almost all conditions. (even if, he also spoked of not ideal conditions). 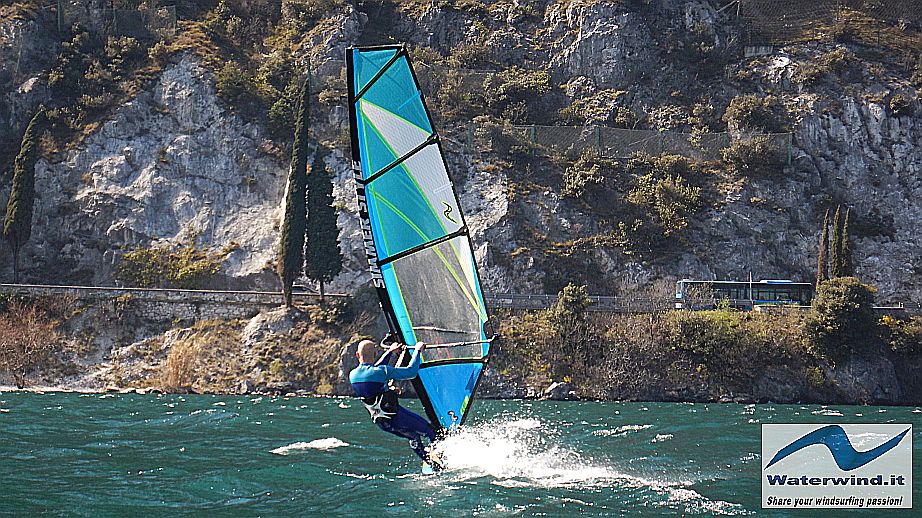 Now we hope that lakes or seas will give us some serious wind for Easter holiday and for national feasts soon afterwards. And who knows, we could escape to Sardinia or France (Languedoc).