Yesterday, 31st of march 2015, we have been to the mythical spot of Hotel Pier at Riva del Garda. We had an exceptional day, partially predicted, with Ora wind (the typical thermal Garda lake wind) that, at its best during the session, was to handle with a 4,2 full power......

We meant to try the double at Garda lake, in other words, to have an early morning session with Peler (thermal wind of the morning), and an afternoon session with the Ora (thermal wind of the afternoon). Studying weather forecasts, we had some doubts for the Peler, while we were sure that we would have a very good Ora. Infact, wind maps showed west winds in the plains at South of the lake during the day, that easily would have come up through the lake enhancing the thermal wind. Morevore, sky at North of the lake would have remained clear, ensuring sunny and warm weather in the valleys there, also good for thermal wind genesis. 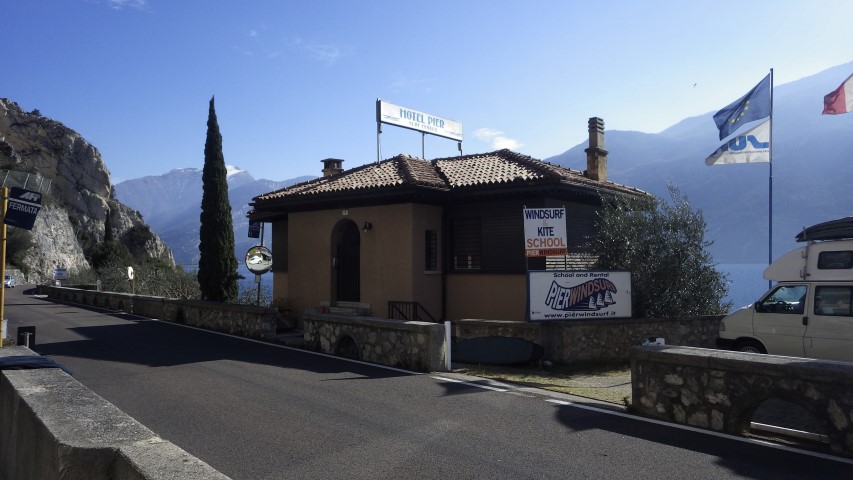 Wake up at 6, and quick consultation with Michele. In Torbole, North wind is weak. Probably, as supposed, we will not have Peler. But, already, we are awake, and we decide to go anyway. Pra de la fam (another mythical Garda spot), where we would have session with Peler, it's on the way to the Pier.

We are at the Pra de la Fam just before 9. As expected, there is only a light wind from the North, which, indeed, before we leave, around 9:30, already turns into a light South. Great sign for Ora wind!

We arrive at Pier, at about 10:00, and it is love at first sight ..... The spot is now surrounded by a lovely quietness. The landscape, illuminated by a bright and almost summer light, is magical. Mediterranean vegetation, the cliffs overlooking the blue lake: fantastic. It's warm. We are among the first surfers arrived on site today (later, many others will arrive, but not the summer crowds, which, we are told, are seen here in summer).

We meet Roberto, surfer from Bologna, who has been here for some days. He explains the logistics of the spot.

From the parking lot, through an underpass, we access to the area near the lake shore. And, even here, the place immediately shows to be fantastic: the typical Garda spot efficiently equipped for windsurfing. Today, we do not pay. We were told that the Pier is not cheap in summer, and we were ready to pay something ... But, as Roberto explains, during the week, at this time of the year, it's free. 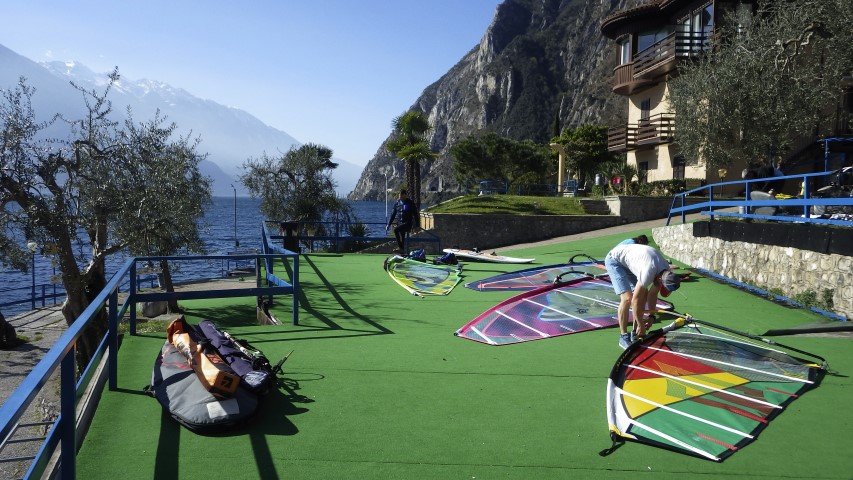 Roberto tells us, that here, normally, with Ora wind, people use sails between 4,7 and 5,7. But today we will have a surprise....

My friend Michele gets into water with 4,8 and a Fanatic skate 100, but soon comes back saying that he is overpowered (he is 65 kgs), and changes for a 4,2. 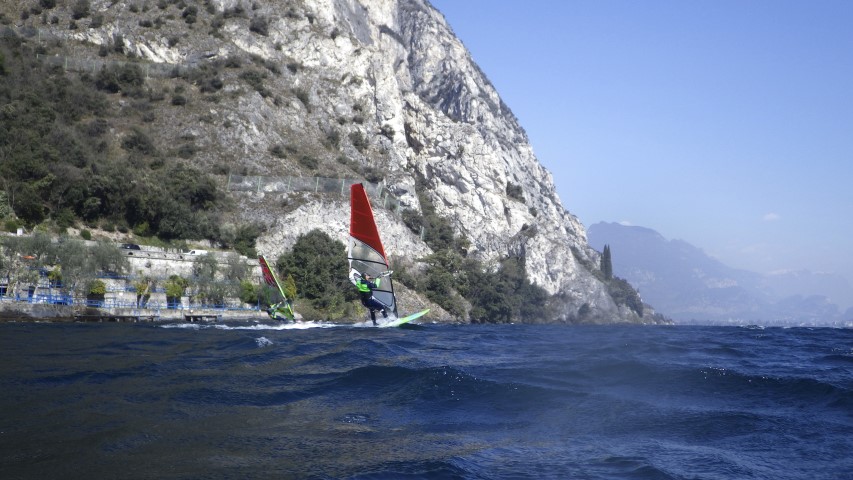 So I take off the boom from my 5,5, and put it on my 4,7, to get into water with the 111 liters board. Fantastic feelings.... Constant planing. Looking around I feel like being in Heaven..... In the meanwhile, others surfers have arrived to the spot, and in the water I am surrounded by a lot of collegues (but they're still not too many, so that, in this conditions, it's a pleasure to surf with other people).

I had a phone call with Marco, a friend of mine, in the morning. He suggested the lake area where to try the power jibe, that I want to learn in this season. So, I go upwind, and reach the suggested area, that it's near the shore. It's just South of the spot: here wind reinforces, and you have flat waters. So, it's perfect to try. I'm not tired, because it's the first part of the session. So, I try, and I try again. I've almost got it .... but I'm still missing something, because I fall at each attempt... 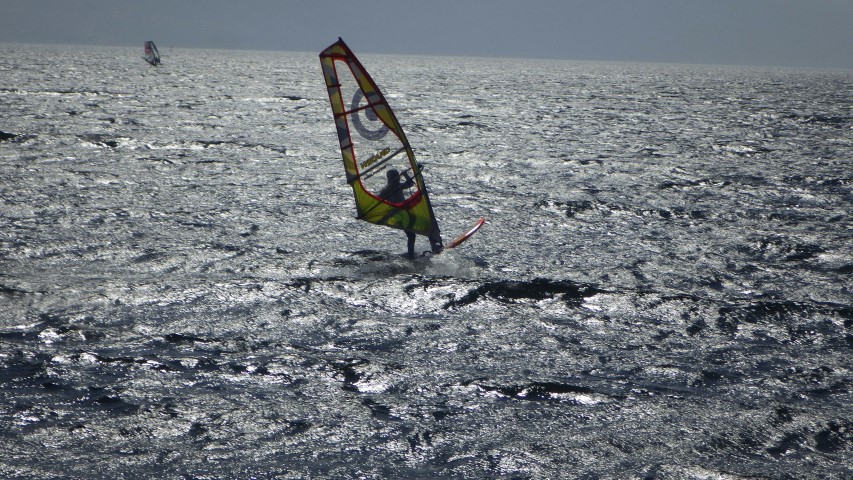 The wind increases even more, and I am not longer able to keep the 4,7. Michele suggests me to try it with the 86, before passing to 4,2. The 86, according to him, should offer more resistance in the water, and should help me to keep the overpowered sail. But it's not like that (at least, for what I experience). The 86 really flies on the water at supersonic speed, and gives me the feeling of being out of control. 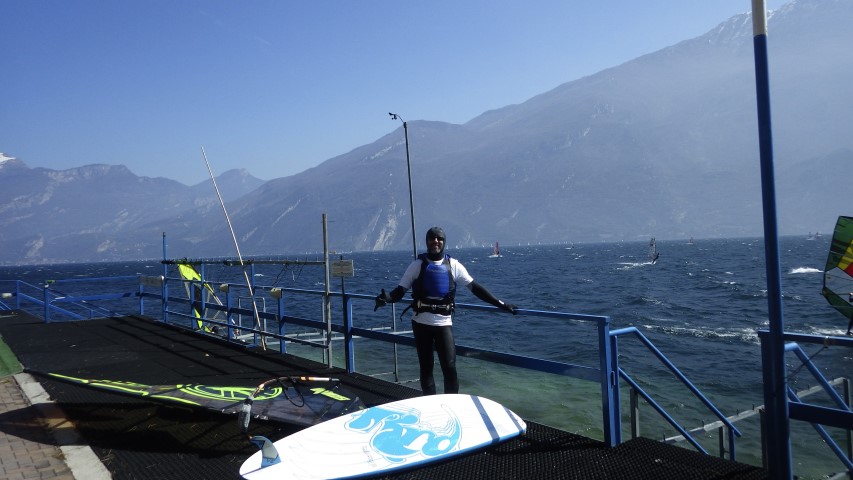 I come back to the shore, and I decide to pass, definitively, to the 4,2, that I had not even rigged..... But first, I take some rest and I chat a little with other surfers on the shore.

When I get into the water again, a guy looks at me with 4,2 and says: it's going down (the wind)... Later, I will think that he was making a joke.... To be honest, just after getting into water again, I get some unpleasant lows for 4,2 and 86 liters, but then the wind will begin to blow strong again, even if no more steady as in the first part of the day. So, I decide to use the 4,2, but with the 111, that I love so much. In the last part of the session, gusts are incredibly strong, and fill completely my 4,2 that now I barely handle. I don't know how many knots there are, but, in my experience, when I am overpowered with my 4,2, they are more 40 than 30....

Now conditions are tiring. I often fall and go downwind. So, even if I still have got energy, I decide to go off shore close-hauled, to go upwind and go back to the starting point. After tacking, I take the opportunity of another tremendous gust, to get a long and speedy planing up to the rubbed stairs, where you can get out of the water (see last video below). 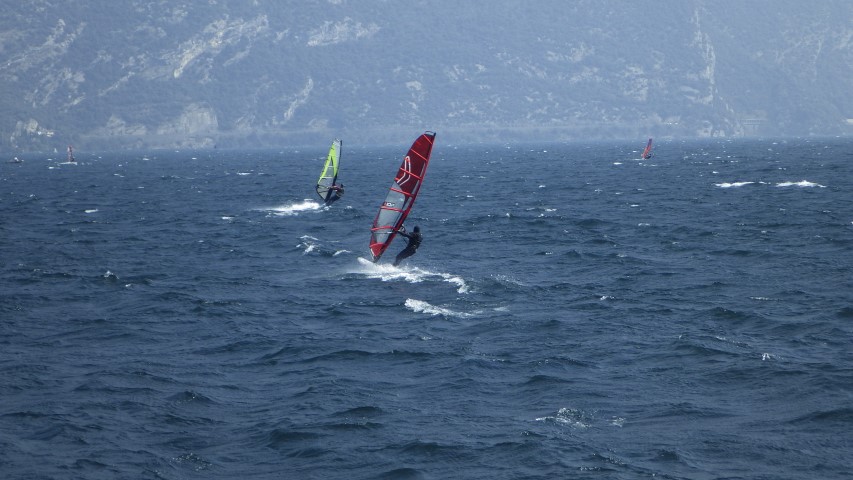 I still remeain at the spot to take some pictures of some very good local freestylers...

Session finishes at 15:30. Wind is still blowing strong, but now it's mainly in the offshore part of the lake.

I put away all my stuff, and chat of the day with other surfers.

We all agree: we have to mark this day on calendar....!

Read also the detailed review of the spot.

Videos of the day