Campione del Garda (Part of village of Tremosine) stands on an alluvial fan formed by the stream San Michele, and it is a small piece of land stolen to the lake. Behind it, there's a steep vertical rocky cliffs that characterize this stretch of coast. The spot works both with the Peler wind and with the Ora wind. At the time, this review refers to the conditions for windsurfing that you may have with the Ora wind.

The spot is situated along the West Gardesana national road (SS 45). Coming from the south, the small village is located after Gargnano and Tignale (and the famous spot of Pra de la Fam). Coming from the North, you reach it after passing Limone del Garda. 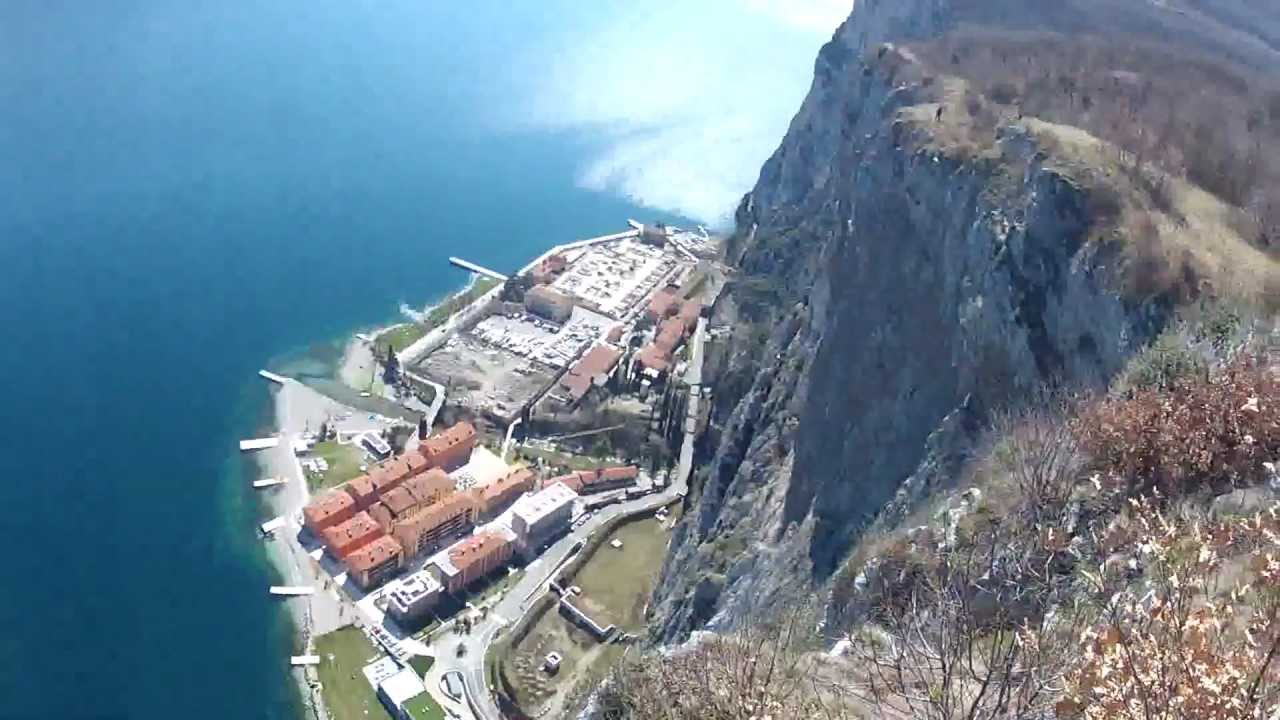 On the ground, the spaces are quite narrow. For parking, there is a big covered car park (recently built), which in summer is filled almost completely. Otherwise, there are some places on the short promenade along the lake shore and in the main square of the village, which is quickly exhausted. If you do not park on the lakefront, it is convenient to have a trolley to transport the equipment.

In the northern part of the village, there are several Bar / Restaurants.

At the spot you can ask to Tendersurf, windsurf and kite shop and school, if you need. Note that Campione, in fact, is quite well frequented by kiters (there is also at least an other school kite at the spot), because kitesurfing is frobidden in the upper part of the lake, while here it is allowed.

You can get into water from the beaches in the northern part of the village (where there is also the windsurfing and kitesurfing school); or, you can enter into the water from ladders near the stream mouth, along the lake front (just at the north of the pier).


The spot also works well with the Peler. We have not tried it with those conditions, and, therefore, we do not review it with Peler. Most likely, it must, however, offer conditions very similar to those offered by the near spot of Pra de la fam, with this kind of wind. 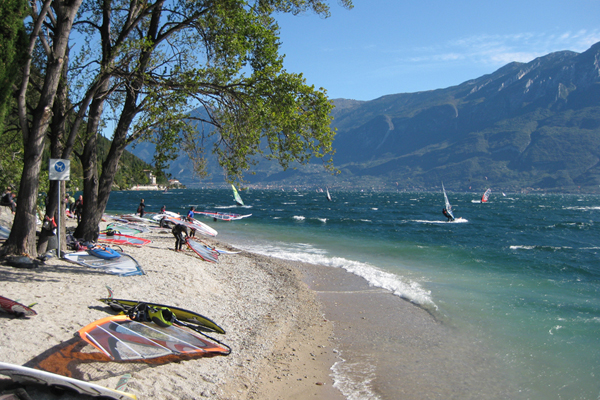 We tested it with Ora wind, and so we want to give some advice on how the spot works under these conditions.

Normally, the Ora wind, here, is less intense than in the far North of the lake (Riva del Garda and Torbole), but, however, it can give beautiful session. We happened to catch an Ora wind, that began to blow late in the afternoon, in early April. It was unexpected because in the first part of the day strong winds from the North East had blown (which had produced a Peler of 30 knots at Pra de la Fam). That day, it was also unexpected for intensity, having reached twenty knots. 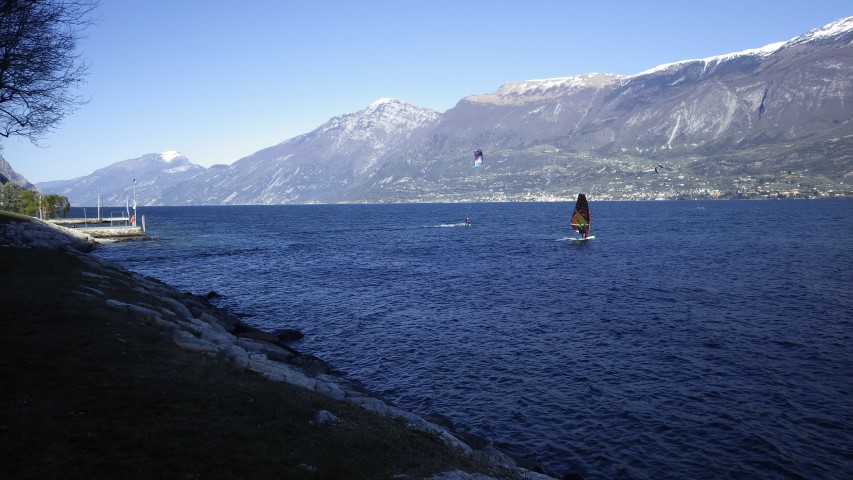 About Ora wind, we suggest not to make the mistake that we made the first time we tried the spot: we recommend not to be deceived by the intensity of the wind felt, or measured, on the ground, at the lake front, or on the pier. Indeed, bouncing off the rock walls behind the village the wind speed increases significantly near shore. The day that we had our first session here, in the water we had twenty knots, while with the anemometer, before the session, at the pier, we had measured a stable 25-27 knots wind, with gusts up to 30, which led us to rig an inopportune 4.7 sail (I weight 67 kg). In the water, the spot turned out nice. The lake here is large, and if you are sure that the wind is not falling down, you can ride from shore to shore. Otherwise, it is best to stay within two - three hundred meters from the shore, because, as mentioned, here the wind is stronger. The chop was low when we tried the spot, except small waves of half a meter, almost "surfable", near the mouth of the creek. The point where the wind is stronger is immediately at south of the pier under the rock wall.


In summer, the spot, on the ground becomes crowded of bathers too.


Note that in Campione, facing east, the sun sets early, because of the proximity of the cliffs that loom on the beach (to the west). Off-season, this fact makes the spot less pleasant than others: you suffer a bit of cold, especially when, after your session, you must take off your wetsuit on the shore, in the shade, with some residual wind. In summer, we think that, from this point of view, there are no particular difficulties.