It was a long time since I had not come back in the mythical spot of the Conca d'Oro at Garda lake. Beyond enjoying the strengths and the quality of the wind in the spot, I wanted to feel again the wonderful atmosphere that you at the beach there. The day was wonderful, and it was also the occasion for a special meeting.

Arrived at the spot a little after 10, I had no problem with parking (from this year managed by Torbole city administration). Enchanting scenery, with a deep blue sky and lake, and the mountains around, to build a unique setting. At the beach, very relaxed atmosphere, with some 18 ft skiff, here for the European Championship), to make a fine show upon the grass. At Shaka Surf Center,  the new 2016 JP boards feature, combined, from this year, with Naish sails. 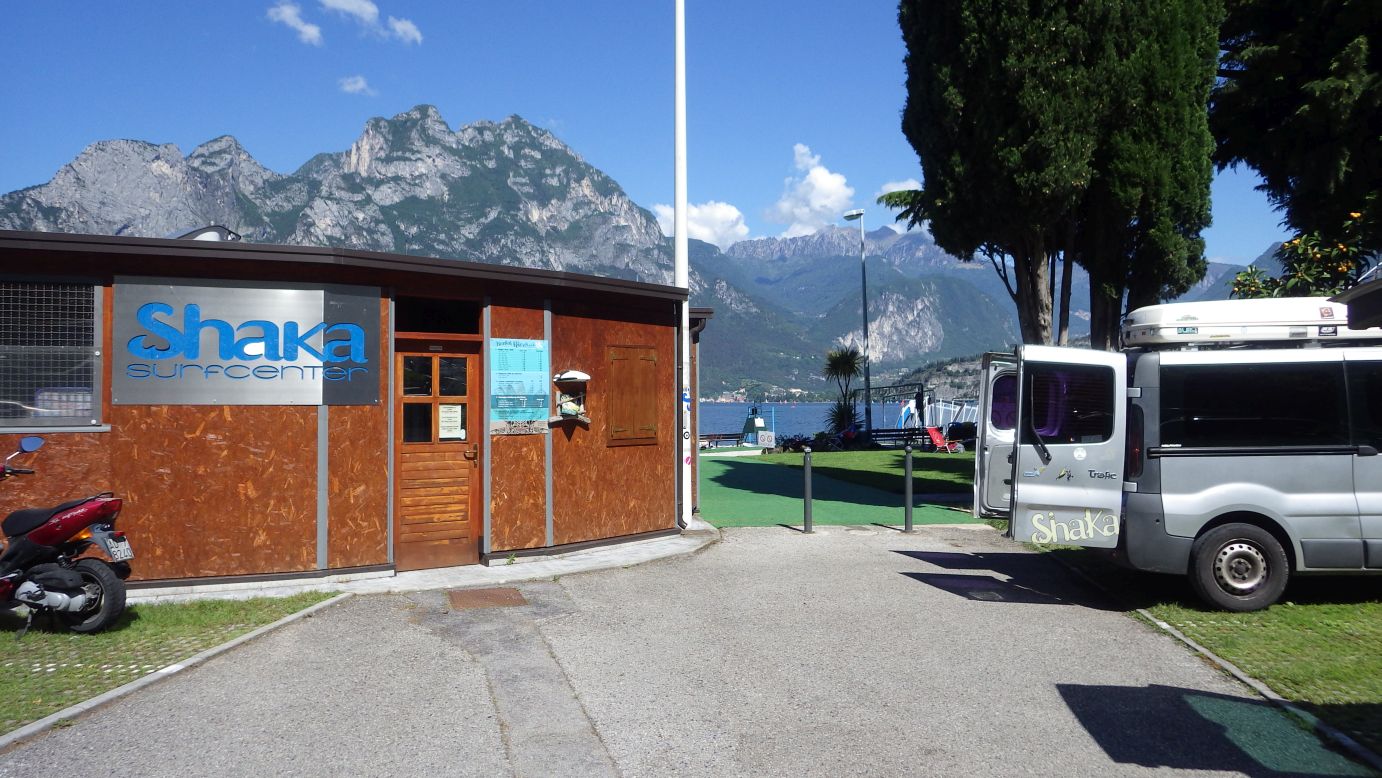 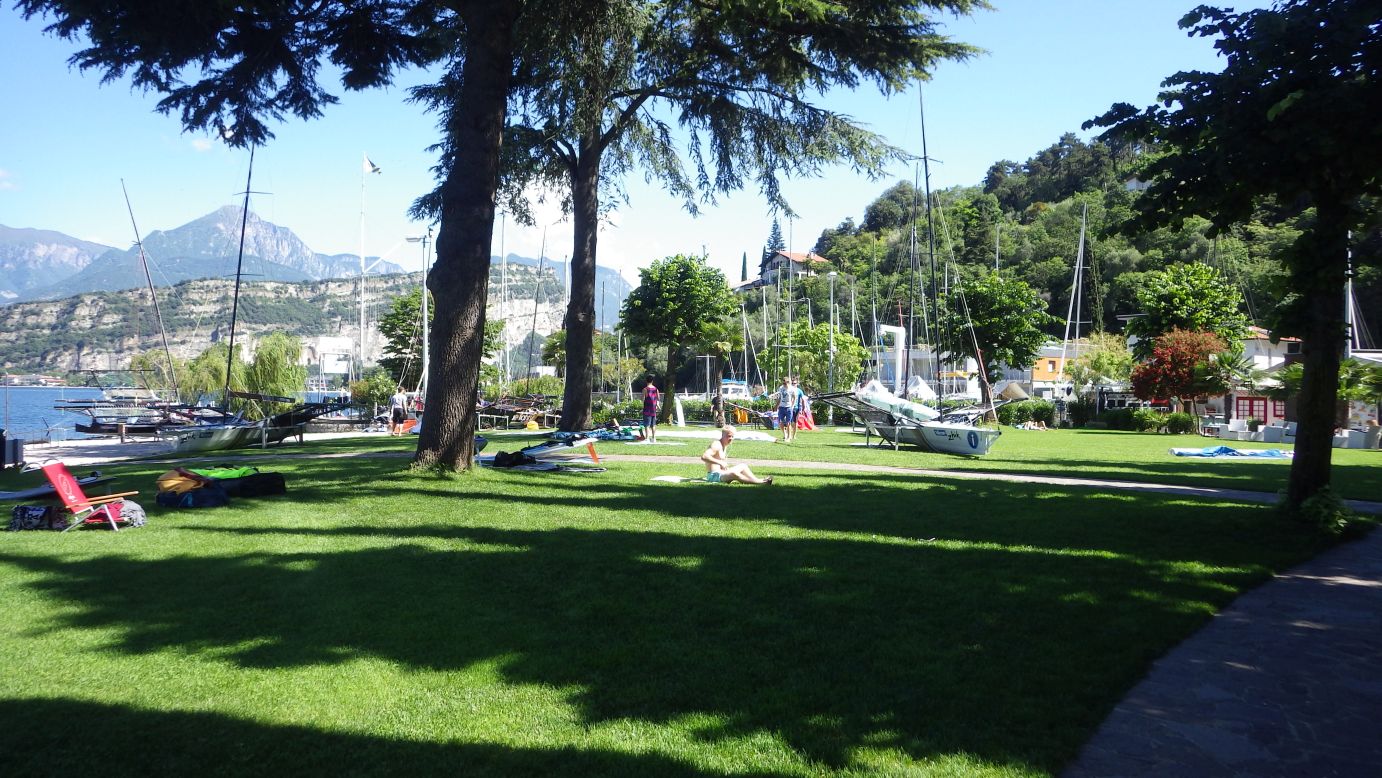 The wind turns from South early (already at 11, a breeze of about 10 knots is blowing), so it seems a promising day with Ora wind will be confirmed. I decide to do as many hours as possible in the water. I want to begin early, as soon as the wind is good to get planing: so I rig the Ezzy Chetaah 6.5, to match with the Tabou Rocket 115 ltd, a set, with which I need only 10 knots to begin to glide (I'm 70 kg). I will reveal suitable only for the first half an hour! In fact, from 12:30 onwards, the average wind will be of about 17 knots, while the gusts will reach 25 knots. At the anemometer of Shaka Surf center..... At the Ponale (the moutain near Riva del Garda), where I spent most of the day, the gusts probably have arrived up to 30!

Pending appointment with Andrea, expected around 14.30, I begin my session at 12,00, and I have two beatiful hours in the water. The first half hour, as mentioned, I am right trimmed and powered with sail, and I enjoy it a lot. To reach the Ponale (the cliff near Riva, where yuo have the best wind), I do almost three kms of uninterrupted gliding: which other lake grants such pleasure? Reached the Ponale, I stay in the area to practice maneuvering. The place is scenically very beautiful, with mountains walls that loom over the green lake, the wind, here, is stronger and more spreaded, and the water surface is characterized by more orderly waves. 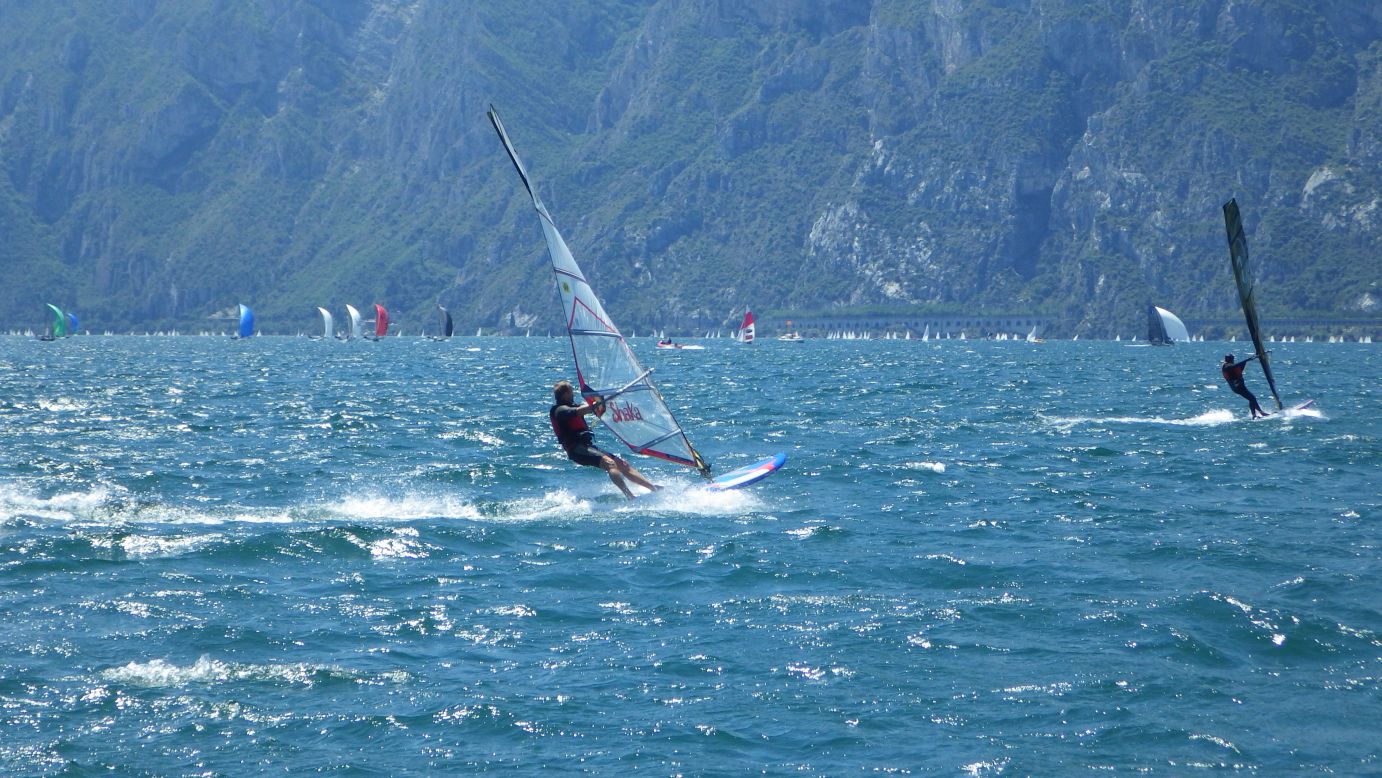 When I realize that I am too much overpowered, as the wind has grown up, I start to think of returning to Conca beach, to rig at least a 5.5 (but at Ponale, it would be good a 4.7), and maybe to switch from the freeride board to the fsw (I must say that today 5.5 and fsw would be the ideal set-up for me, and that after this session, I think I will use use 6.5 and rocket only in flat water, or with wind up to 15 knots).

But, in the middle of the lake, I realize that is about to start the Italy Laser Cup... and there will be more than a hundred boats, to form an impenetrable wall. This, I must say, is one of the negative points of Lake Garda.
As happened at the Pier last time, when there are these major regattas, boats occupy a major portion of the lake, leaving little space to windsurfers and disturbin the wind ..... Moreover, I also risked colliding with a service boat, with a pilot on board, talking on mobile phone... who was going straight on, without giving to me the right to pass (see video with Go Pro .... excuse me for the bad language...). 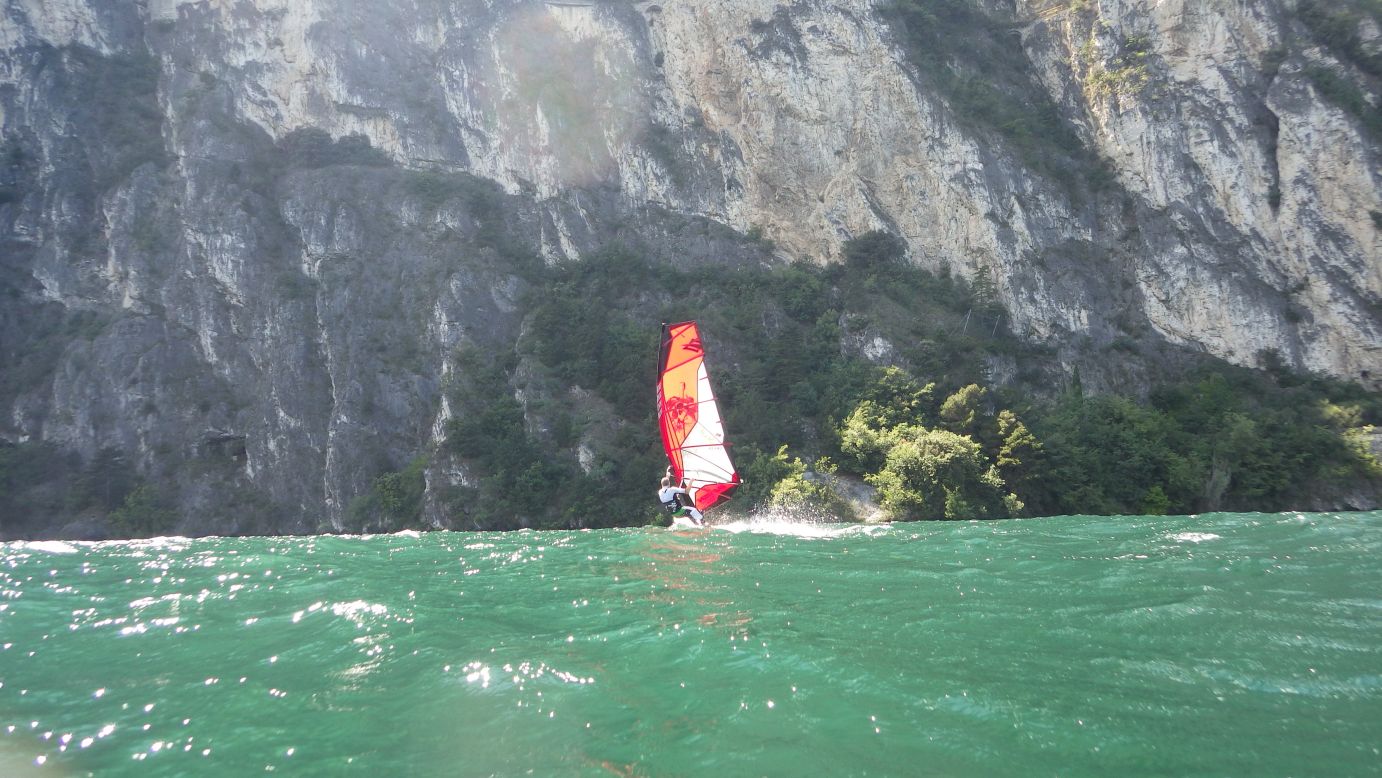 Taking advantage of a pause between one race and another, I go through the lake and back to Conca beach, with the idea of changing the set. It is about 14.00. I meet immediately Andrea (he is one of the many Waterwind passionate readers). He is preparing the equipment (Sail Naish 5.7, and freestyle board f2 Chilli 109).

I share with him my intentions change set, but he suggests me to stay overpowered. Perhaps, he does not know how much wind there is at Ponale!

At 14.30, we enter into water together. Before we try to stay upwind of the Conca d'Oro, where, however, the wind is not very stable. Then, we move to the Ponale again. The result is a beautiful session together, made up of short rides, gliding side by side, and many changes of direction. Andrea immediately shows his skill with tacks and jibes. I'm too overpowered ..... and now even a little bit tired. So, I often fall maneuvering, and I do many waterstarts ..... 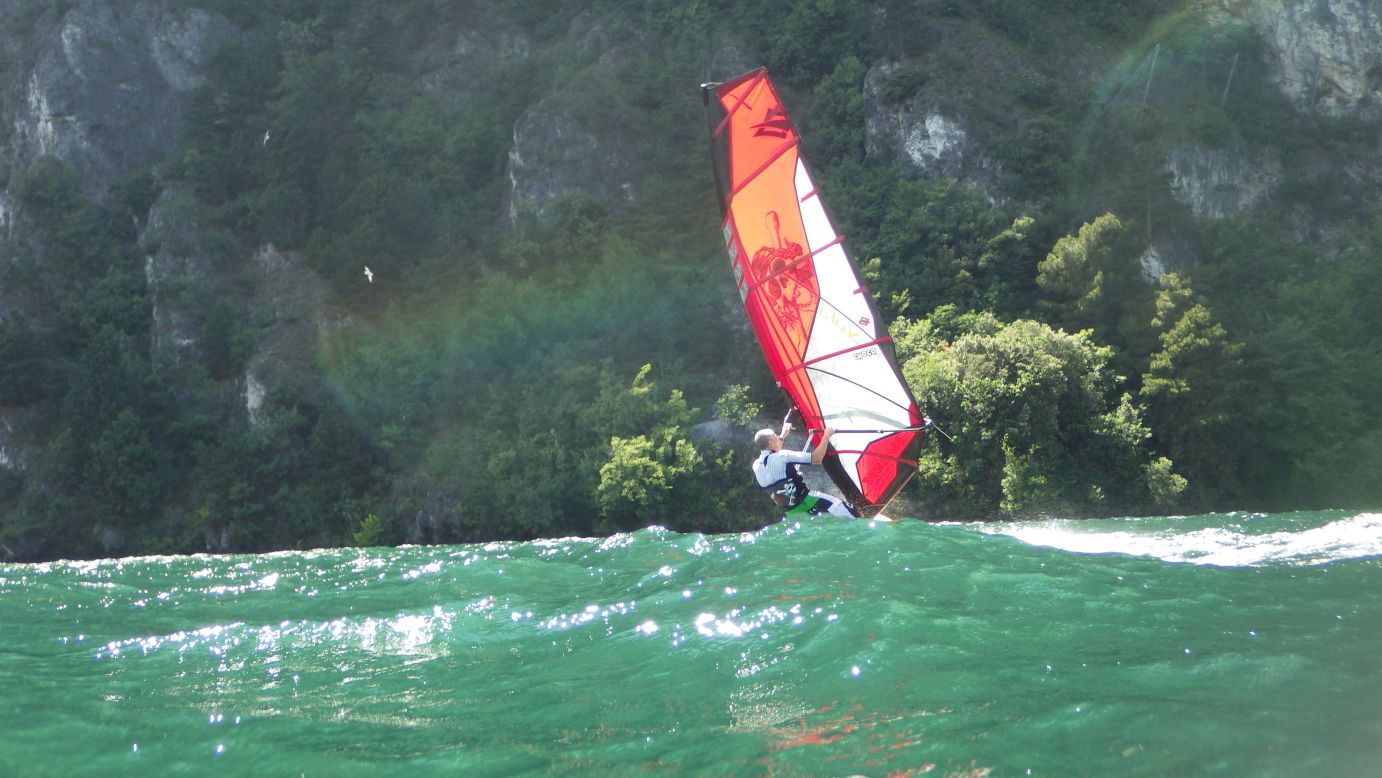 I film Andrea in some beautiful video sequences (see video at end of article), and take some suggestive pictures of him, under the Ponale. He rides going very well upwind planing, and maintaining speed. He's got great technique. Furthermore, the freestyle boards, from this point of view, confirm their exceptional performance. At about 15.30 we start to think to approach the starting beach again, to be near it, in case of possible wind drops. 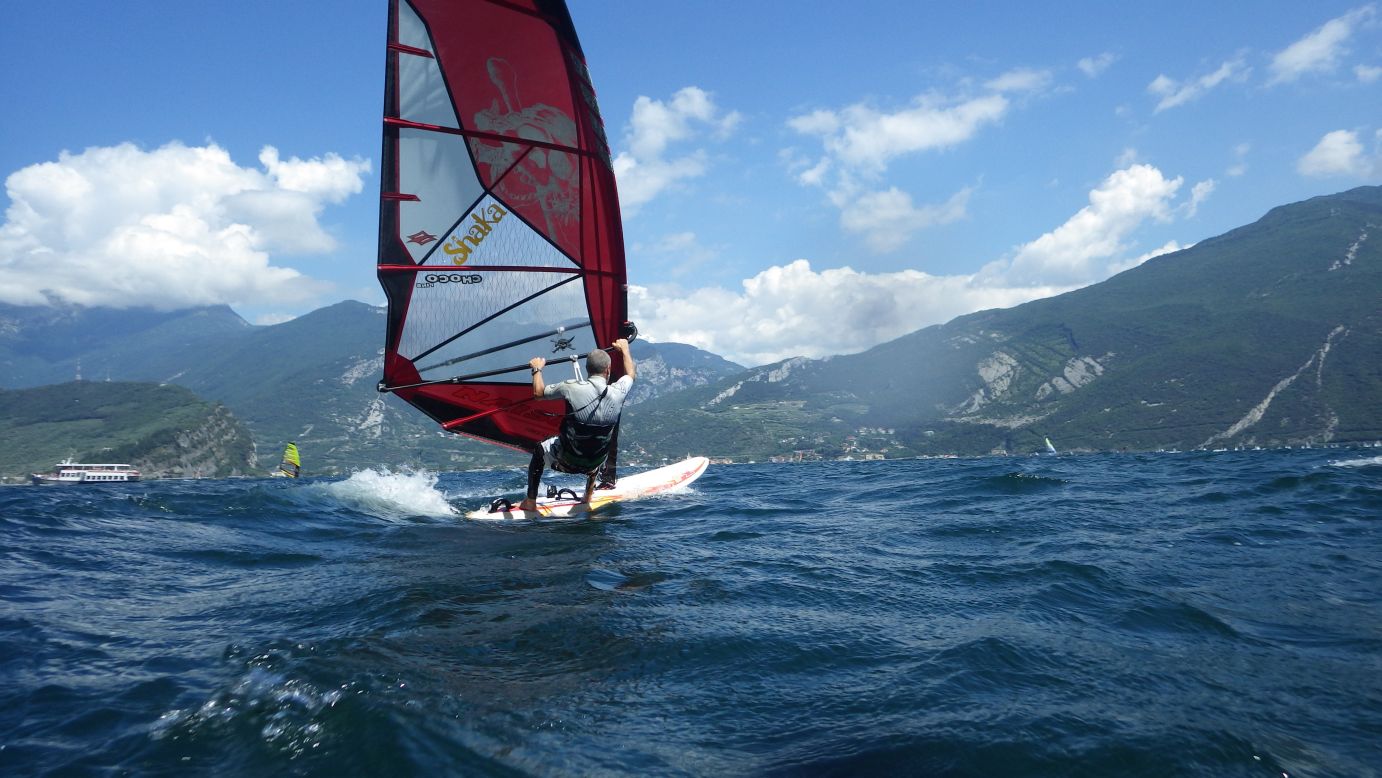 We stay there another quarter of an hour. Then, I, after nearly four hours in the water, begin to feel cramps in the legs. We decide to go to the shore, because even the wind seems to fall (then, after a moment of pause, it will rise up again at the end of the afternoon - see chart above). 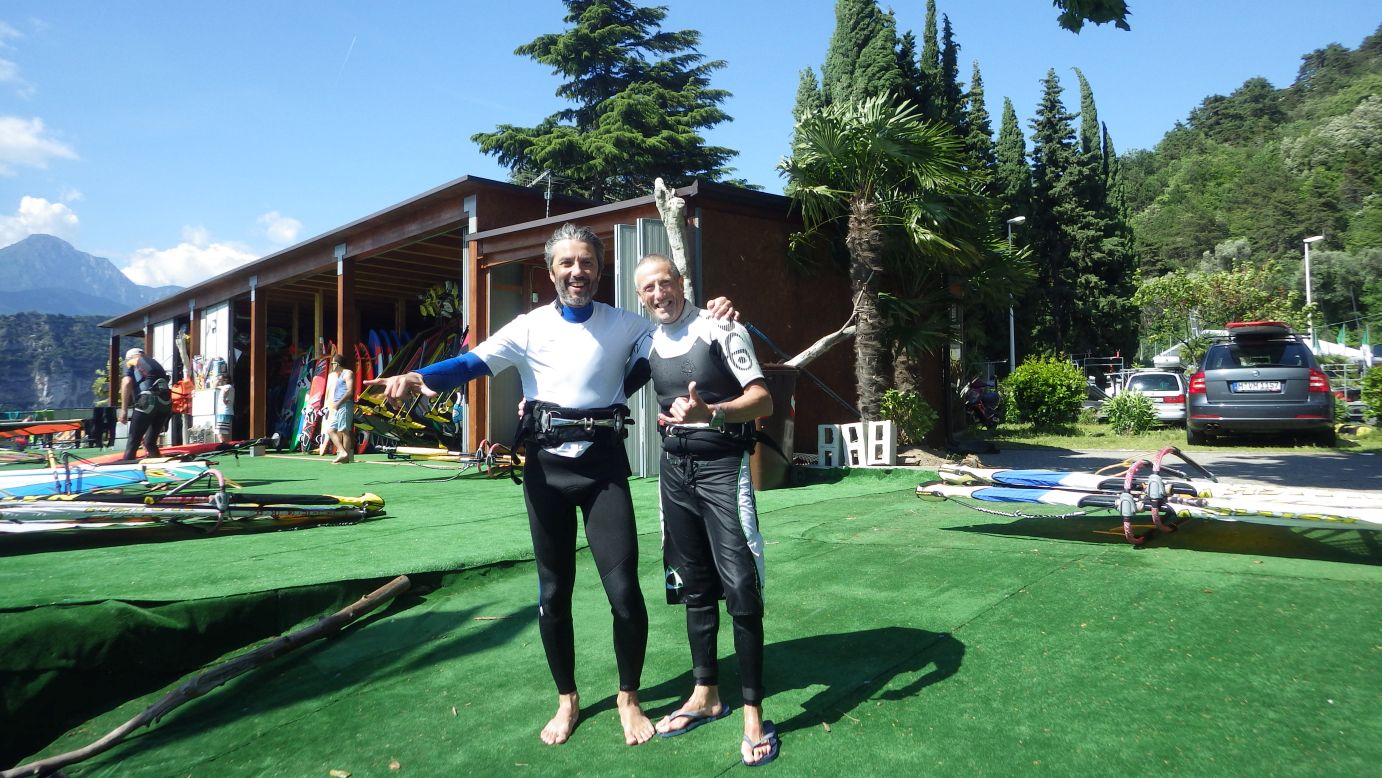 The end of the day is glorious... A beer together, sitting and chatting on the bench in the sun in front of the bar of Conca d'oro: a moment of pleasure, which is worth almost as much as the surfed time in the water.

And now, if not sooner, we will return to Garda Lake on 25-26 june, with our Association Surf and Fun, for a full immersion weekend.

The comments at end of article are very welcome!

Click here, to enjoy the whole slidegallery of the session.

The video of session with Andrea's show!

The video of the session filmed with the Go Pro