Lake Garda, on Saturday, September 8, 2018, shoud not give anything worthy .... Instead, we enjoyed a very good Peler at Prà de la fam, and we also had fun at Pier in Riva del Garda, with Ora wind. With the added value of a special guest .....

Saturday, September 8, 2018 was the first day of my friend Marco Full from Turin at Lake Garda. And I think he will remember it for life ...

I'm really happy that Saturday the Peler was very nice, because bringing a friend in a spot that is really worth of being surfed, when it does not work at best, is a nice disappointment.

Marco came to my house, in Monza, Friday at 22.00, and we left for the Prà de la Fam, at about 5.40, the following morning. Along the way, the fears that Peler could be not good, made me drive with some anxiety, but, as we were driving through the Gardesana, some encouraging signs began to appear. I also hypothesized to continue for Limone, where lately the Peler blows well (even if the logistics on the ground is complicated).

Once arrived at the Pra parking, at 7.20, we found the delirium ... Unfortunately, the situation was very different from my last midweek trip, on Wednesday, which was characterized by a good Peler, but also by the added value of a less crowded spot 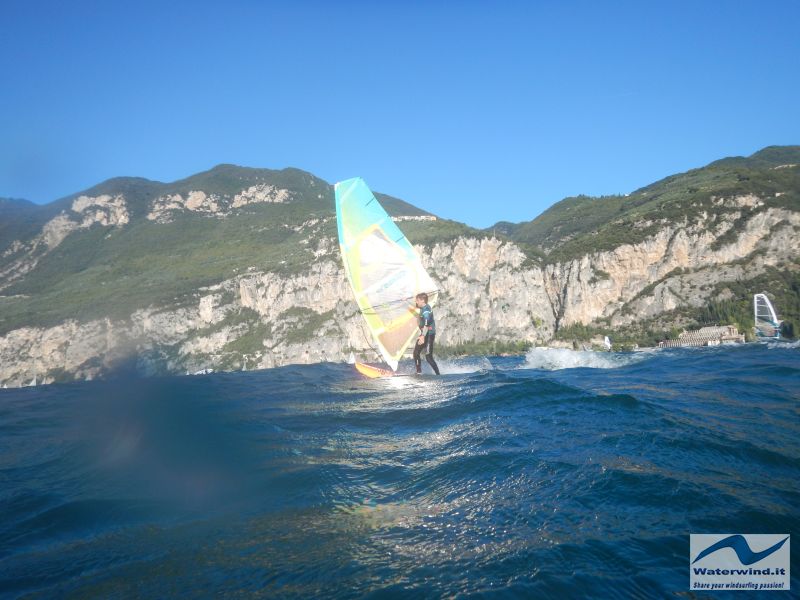 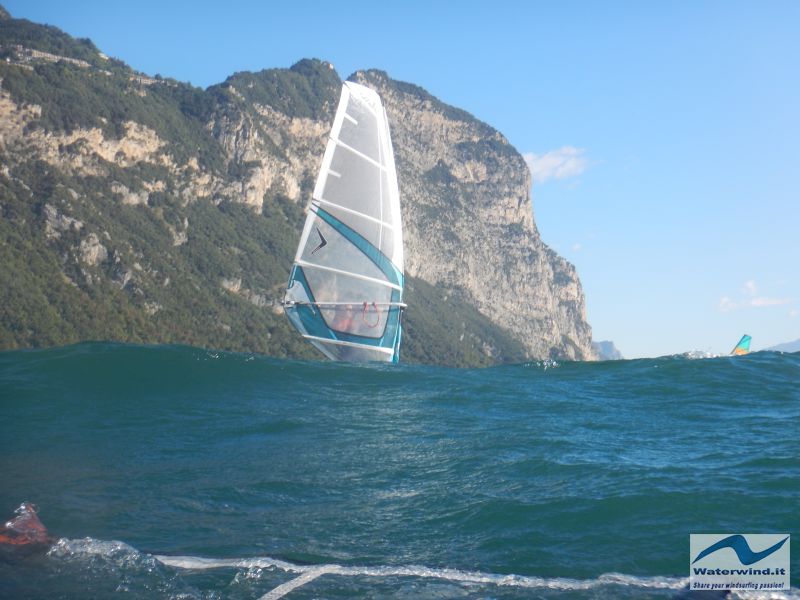 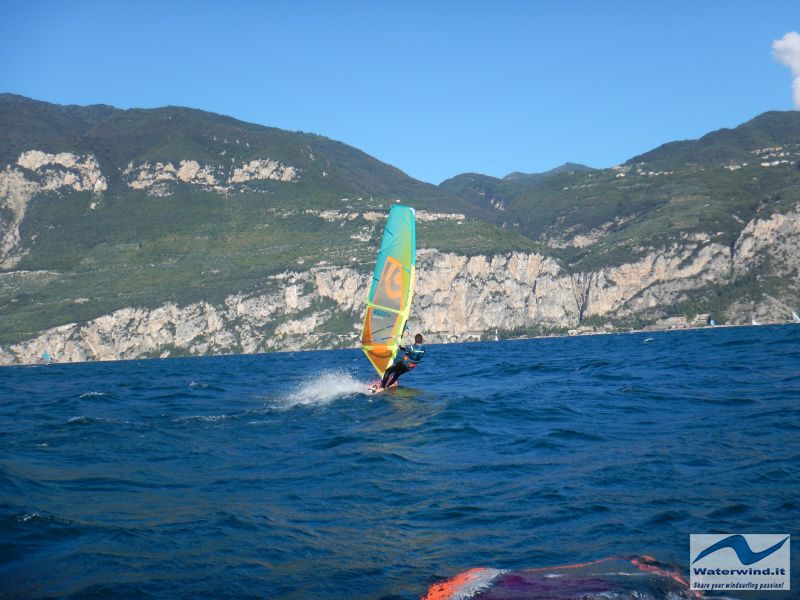 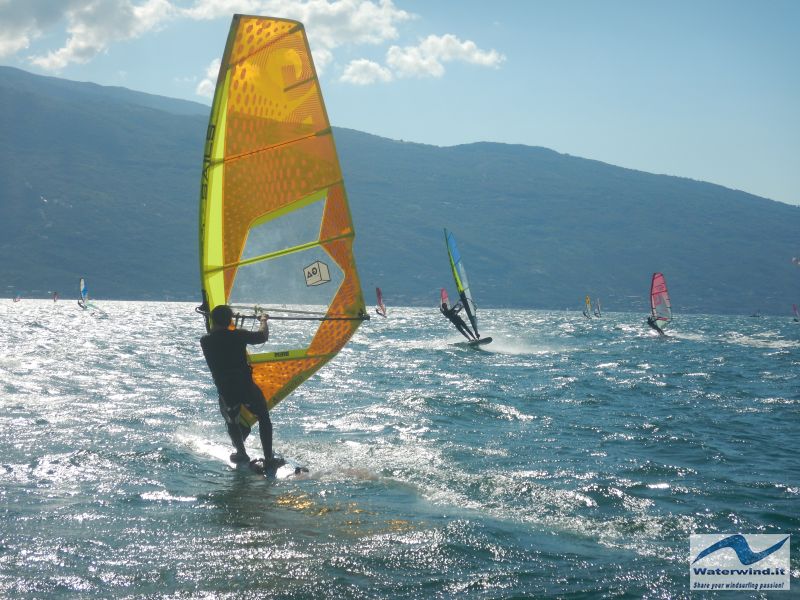 However, once parked the car, we decided to stay at Prà, because the signs for the wind began to be encouraging. It was nice to guide Marco in his first time here, and see his pleasure and enthusiasm in discovering the beauty of the spot, and of the place in general.

But let's move on to the chronicle of the exit. 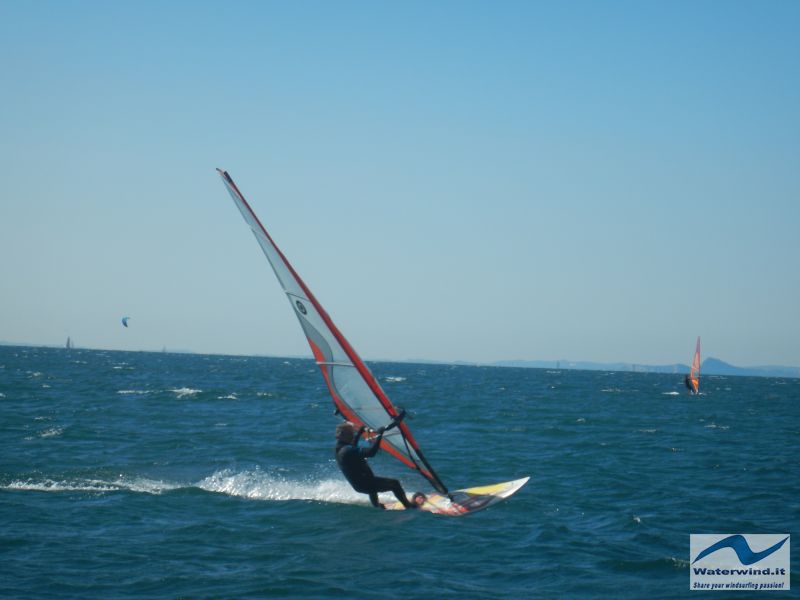 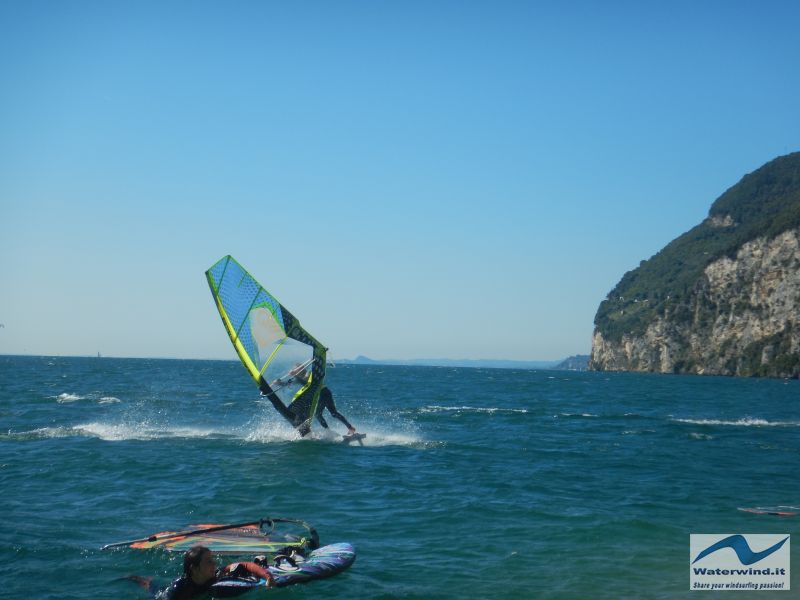 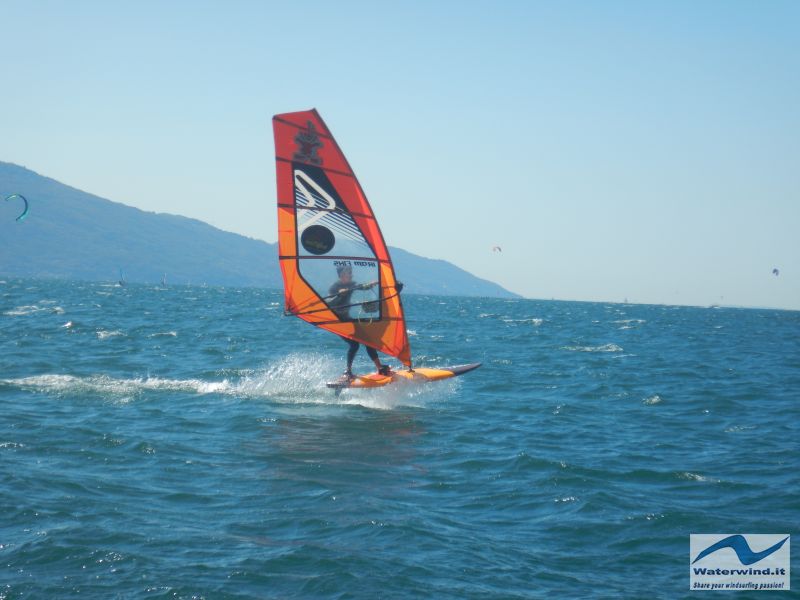 We entered in the water at 8.15. Beyond the almost no wind zone close to the shore, 100 meters from the beach, the funny game started to last for more than 2 hours....

It was immediately nice to see the enthusiasm of Marco for the conditions that the spot offered in the middle of the lake: nice wind at around 20 knots, and the classic regular chop of Peler, about 60-70 cm high, fun to jump and for some surfing, that is for a classic bump and jump session. Marco reminded me of the excitement of my first sessions here at Prà, a few years ago.

After a few rides, however, Marco (who weighs more or less like me - about 70 kg), felt the need to go down with the sail size. We returned to shore, and, after an exchange of views, decided to change for the Combat 4.7. I decided to stay with the 5.5, fearing a short Peler duration. In the end, Marco will be right ..... The Peler, Saturday, rose to about 22-25 knots, and lasted until later than 11.00.

The Ezzy Tiger, however, although it is a sail not so recent and no longer in production, has shown all its undisputed value. During the session I had to sheet the outhaul (I did not do the same with the downhaul, because of my laziness), and in the water, often, I had to open the sail a little. But I never felt it heavy in my hands ...: it's always very soft, and it's confirmed it is a sail you can use with an immense range of wind .... Marco was better with the 4.7, and I'm happy for him, so he enjoyed the exit.

It 's been nice, because with Marco we had the opportunity to do several rides together, to stay close, and maneuver a lot. The beautiful shots and videos that I did in the middle of the lake testify what I am saying. 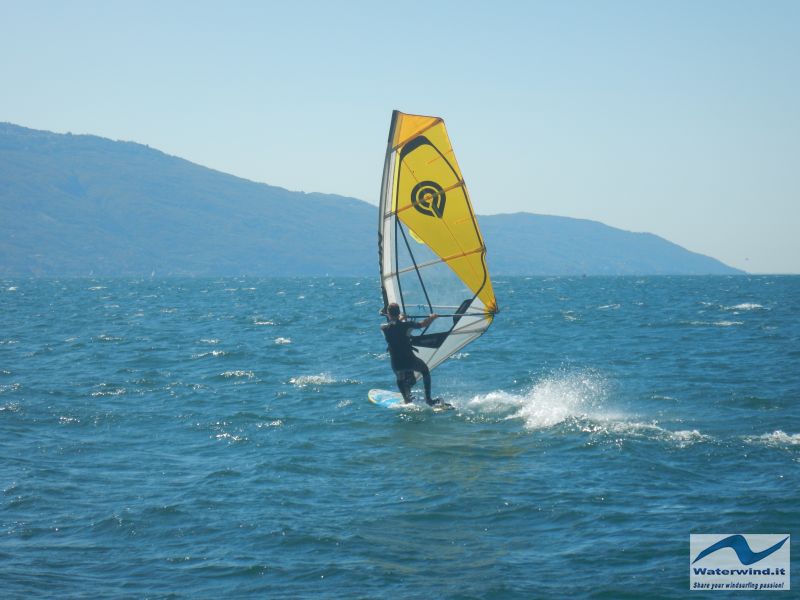 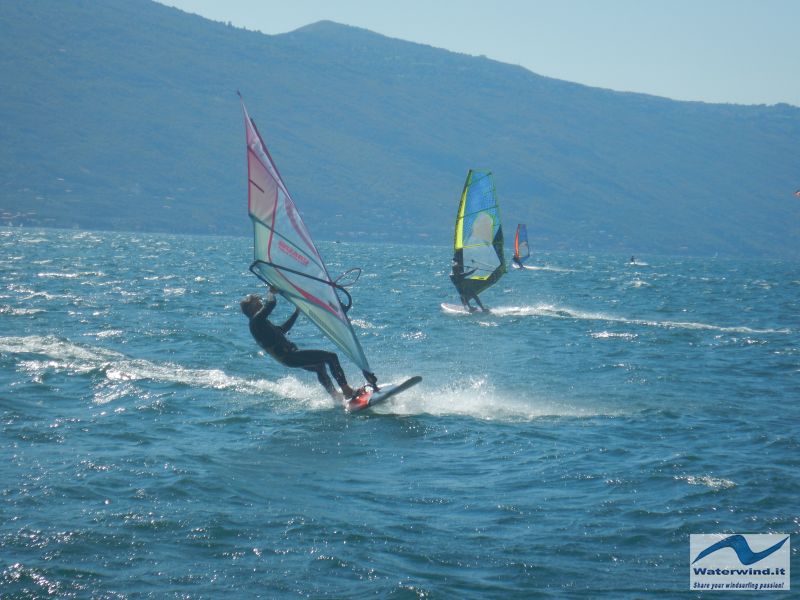 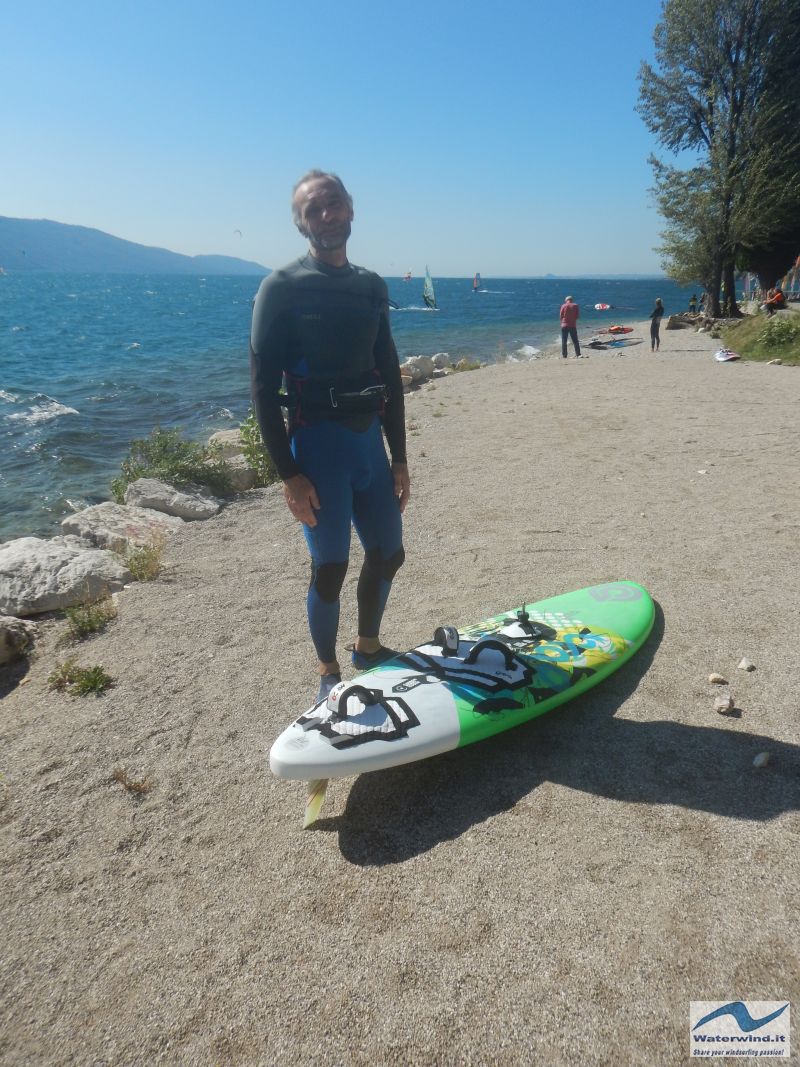 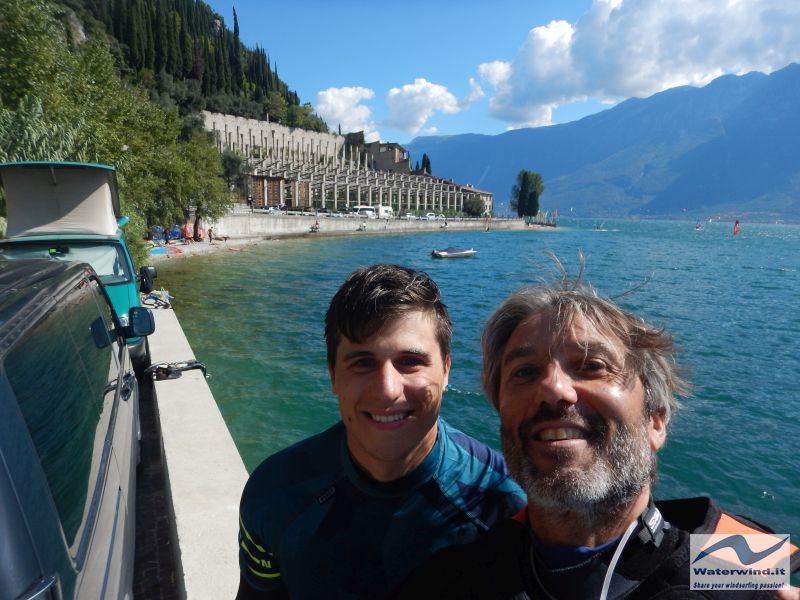 Then, around at 9.30, I told Marco that it would be better to approach the shore, preventing a possible wind drop, and also because of the passage of the Centomiglia regatta (in reality, being the boats number quite reduced this year, we almost didn't realize of the race).

Instead, the miracle happened, and from 9.30 the funniest part of the session started. The wind had a rotation, and started to blow from the North-North East (and not from the North West), which is a perfect direction for the Prà and blew well up to the shore. It was great, since a wind like this allowed me to sail upwind at will, and try and try again all the maneuvers I'm trying to consolidate. Sometimes I started the ride on the new tack, with the brief impression of a slight wind drop, and I found myself, then,with the sail open ....

During the session, I only had some difficulty in fast tack, because sometimes, when the board bow was in the wind, I had to fight against a 70-80 cms chop, which slowed down the board a lot. In such cases, you need to anticipate a lot the body passage on the new tack, and be as quick as possible. In the afternoon, at the Pier, in perfect water conditions (flat/little and regular chops), I will have the opportunity to consolidate an important detail regarding the position of the back foot, before the maneuver (I will return on this matter later).

In addition to Marco Full, many accustomed italian riders were there, to enjoy the beautiful conditions of the spot, and several Germans/Austrian windsurfers (how long do the holidays last in Germany? 365 days/year? Ah, ah), including a young freestyler with a Gaastra sail, who was really good (see video). In particular, ti was nice to meet Paolo (from Lecco). He has been riding here for years, but we have not yet had the chance to meet at the spot. On Saturday, he came out with a freestyle set up (old school, but always freestyle!). Se picture of him, with the Goya Air.

At about 11.00, I definitely came out of the water, well tired, but with the classic smile at 85 teeth ..... Under the hot sun of Prà (we almost desire that it starts to get cooler - the water is still beautiful warm, the air exceeds 30 Celsius degrees), we started to recover our belongings, to prepare ourselves to drive to the North part of the lake .....

I wanted to show Marco the Pierwindsurf (one of the temple of windsurfing at Lake Garda). But after a Peler like that, how could be possible that Ora wind would have blown in the afternoon.....?

We arrived at Pier about at 13.00. The guy at the parking lot (who knows me very well, by now) was kind, and he let us understand for half an hour the possible wind evolution of the afternoon. In the meantime, we went to say hello to Fabio Calò, fellow citizen of Marco Full, and Pier school director (but he is wise...., and from Turin he definitely moved to live here). We also met Nuccy and Gianky, a lengendary couple from Alessandria, whom we got a coffee with. Meanwhile, as announced by Fabio, the Ora wind also entered, and, once paid parking, we rigged in a hurry (I still rigged my Ezzy Tiger 5.5, Marco the NP Combat 5.3). I used the same board.

Marco took advantage of the beautiful opportunity offered by the team Fanatic - Duotone, led by italian agent, Francesco Tedeschi, to try 2019 boards and sails, and he tried the Fanatic Skate 92 2019 (I did some rides, but Marco, who tested it, for a long time, will soon tell us his impressions here at waterwind). In short, we made another hour and a half in the water, very funny, at the "Pigs rock", with 18-20 knots, and with very few people in the water. The water surface, as mentioned, was wonderful. In the first half hour, I landed almost every maneuver. In particular, as I said above, here I have been able to tack well. I had already figured it out some time ago, but, on Saturday, I consolidated the importance of the back foot position, which, once pulled out from the rear strap, during the initial part of the maneuver, must be brought forward, substantially close to the front strap. This determines a very advanced body position, and facilitates a rapid passage in front of the mast when changing side. Nuccy has immortalized us from the beach. Marco also enjoyed his first Pier. 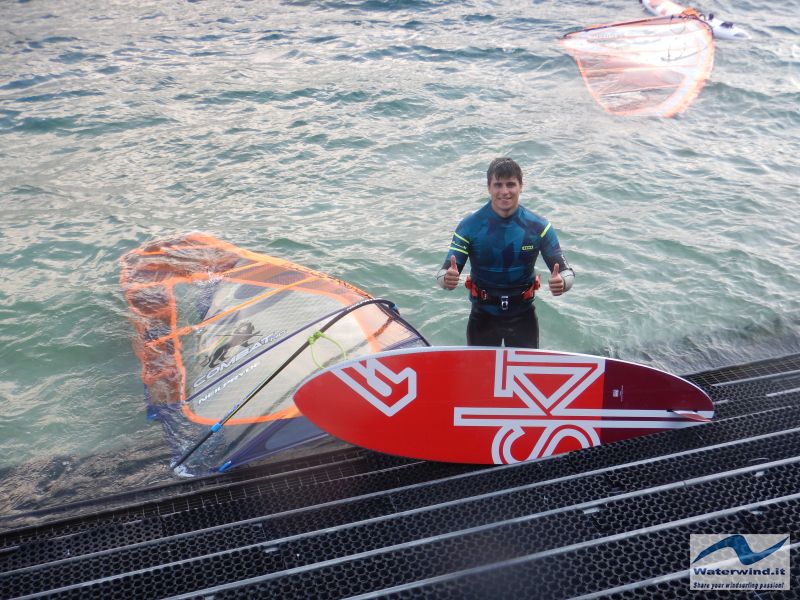 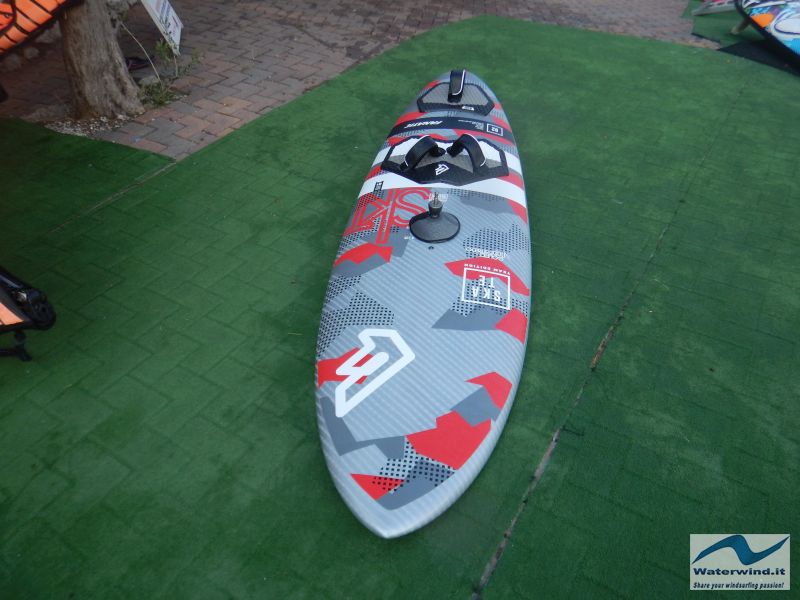 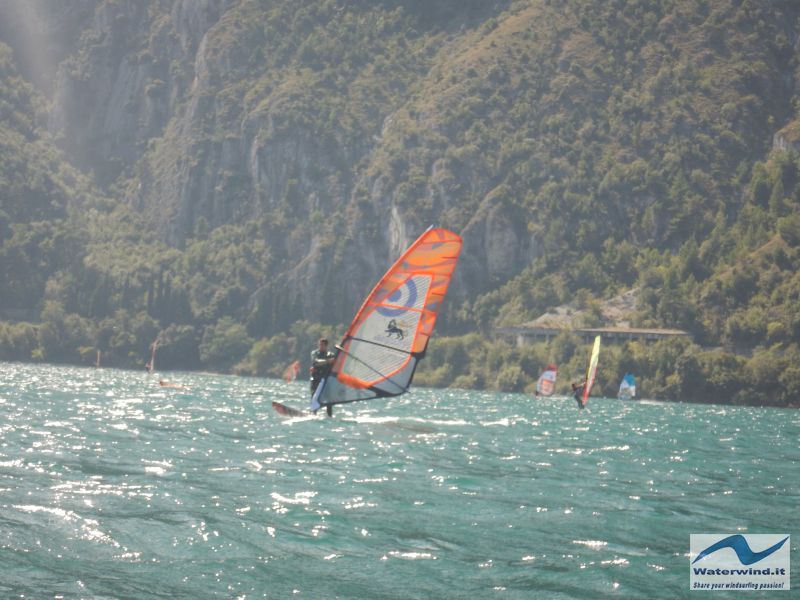 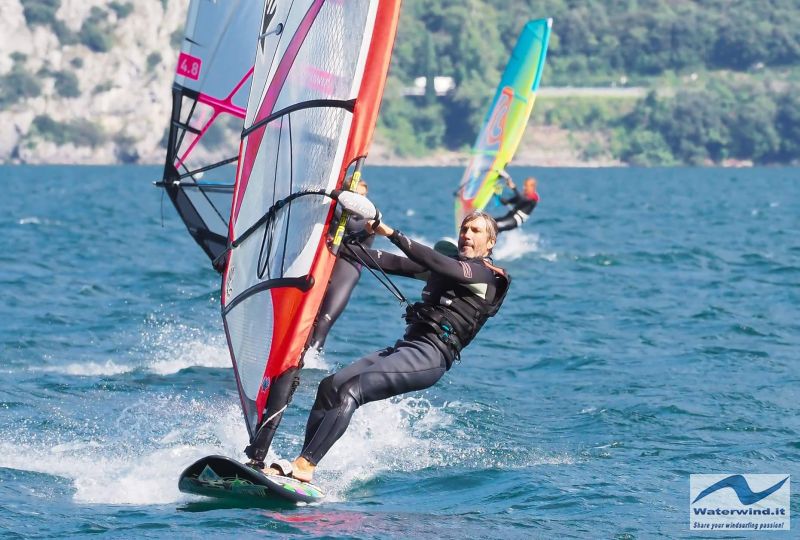 As for me, after 30-40 minutes, I began to feel the fatigue of the day ..... To land maneuvers, I had to put more concentration. About at 16.00, when the wind started to drop slightly in intensity, we came out of the water. 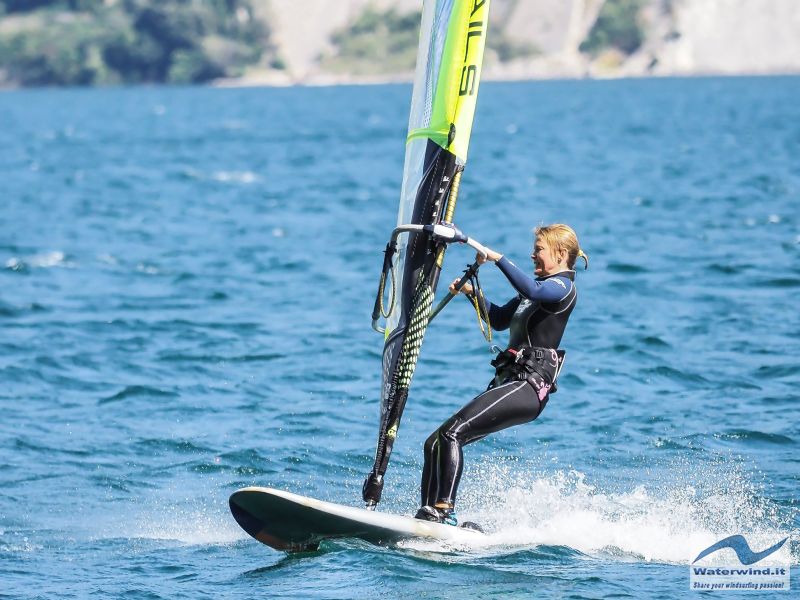 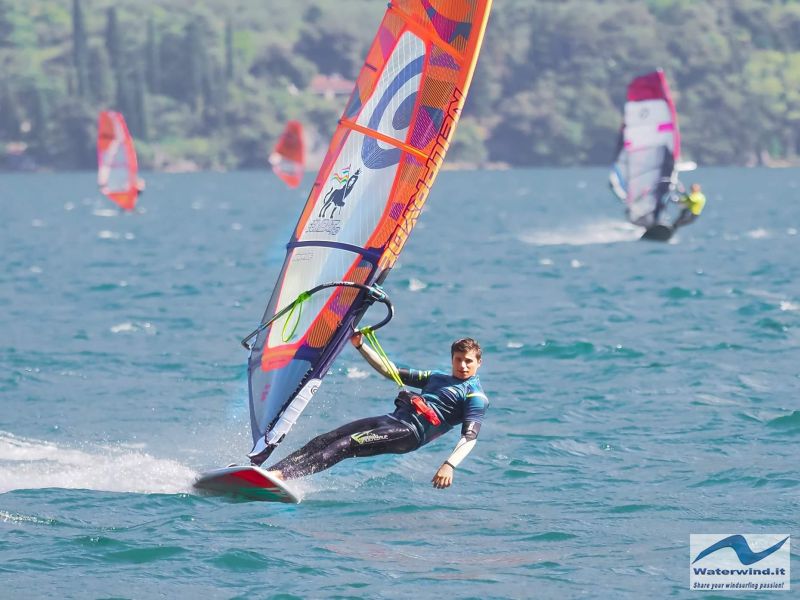 We had a very pleasant afternoon end, in company fo other friends, sipping a beer at the Pier bar.

Then (it was really a full day), we went to Surf Planet shop in Torbole, where Marco bought a Starboard Flare 93 2017, almost in perfect conditions. Marco (who is almost 26 years old, lucky him ...) had the courage to take the big step. Let's see if I will be able to follow him, too, as discussed in Waterwind Forum.

We arrived at home at 22.00: a quick snack, a shower, and I threw on my bed! This week should be good for Peler, again, but, alas, there are work and family commitments, this time .... And do not say that I'm always surfing around ....