Against all odds, Saturday, September 10, 2016, at Pra de la fam (Lake Garda), we had a very good session with a tense and long lasting Peler (early morning wind). And this fact teaches us definitively that you've always got to try, because windsurfing requires lots of patience, but the good session  is always around the corner.

It's been a week where I discreetly stressed out with the weather forecast. It had to be a windy week on Lake Como and Lake Garda, and indeed it was. But how much unpredictability! And so, on Saturday morning, I arrived at the Pra without great expectations. Having family with me (in camping site at San Felice del Benaco), I had to limit the equipment charged on my car, and I brought with me only the Tabou Rocket LTD 115 (a freeride board), because I was not expecting much wind. It should also be a day of traffic, on roads and in the water, considering it was scheduled the legendary Centomiglia regatta. But, on the other hand, also from this point of view, things went better than expected. 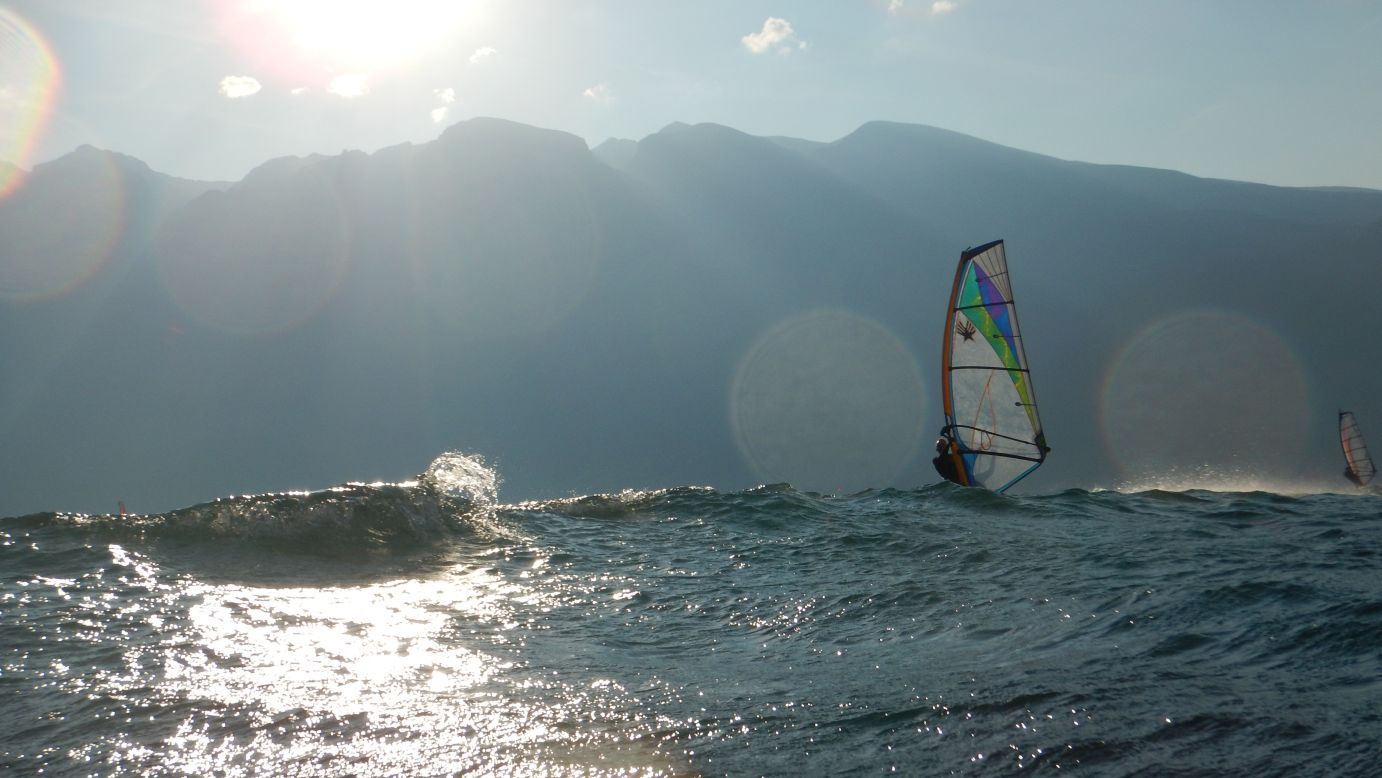 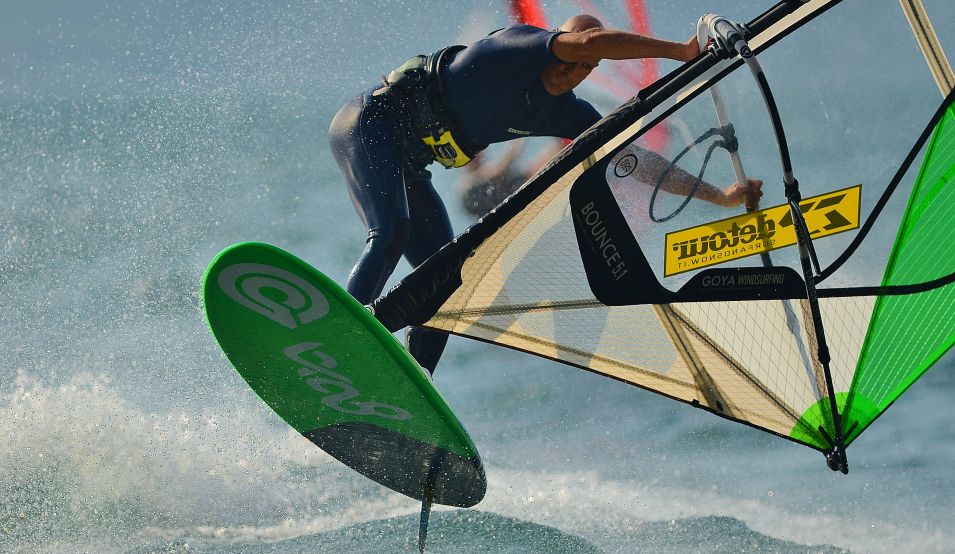 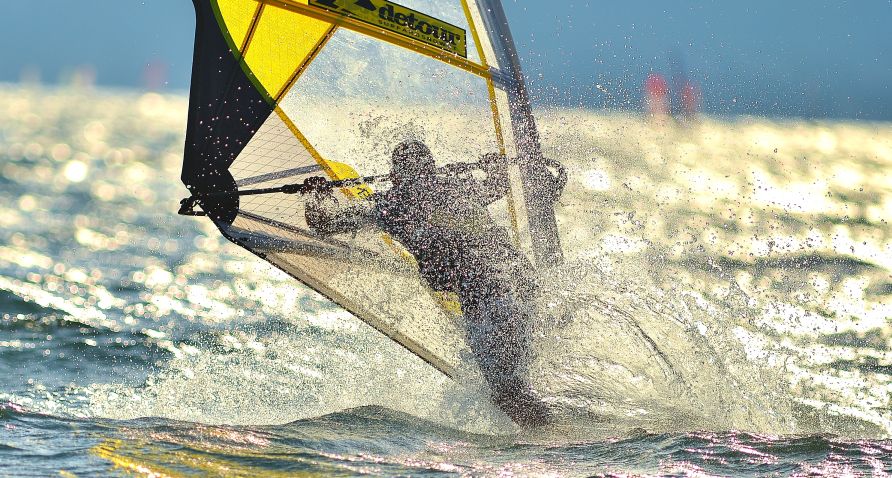 I left San Felice about at 6:20, and arrived, quietly, in half an hour at Prà, without any problems. Evidently, the crews of Centomiglia were already in place, and the following photographers and fans move later. Once I arrived at the Prà, I easily parked, and I immediately met Ricky Amadori, local rider, regular of the spot. We did breakfast together, and Ricky told me of his last vacation in Fuerte, where he explored the spots at north of the island (Corralejo, El Cotillo, Flag Beach, etc.).
Due to my mediocre session at Pra, of last Thursday (Fanatic Freewave 105 TE matched even to an Ezzy Chetaah 6.5, to get lasting planing), and to Meteotrentino.it forecasts, at 7:30, on Saturday, I was not very optimistic ...  and, instead, we must always give Prà time and trust.

Moreover, being now in late summer, it is normal that the wind now comes in a little later. And, in fact, around at 8 o'clock, the signals have become encouraging, with some riders already gliding at the center of lake, just to the north of the spot. 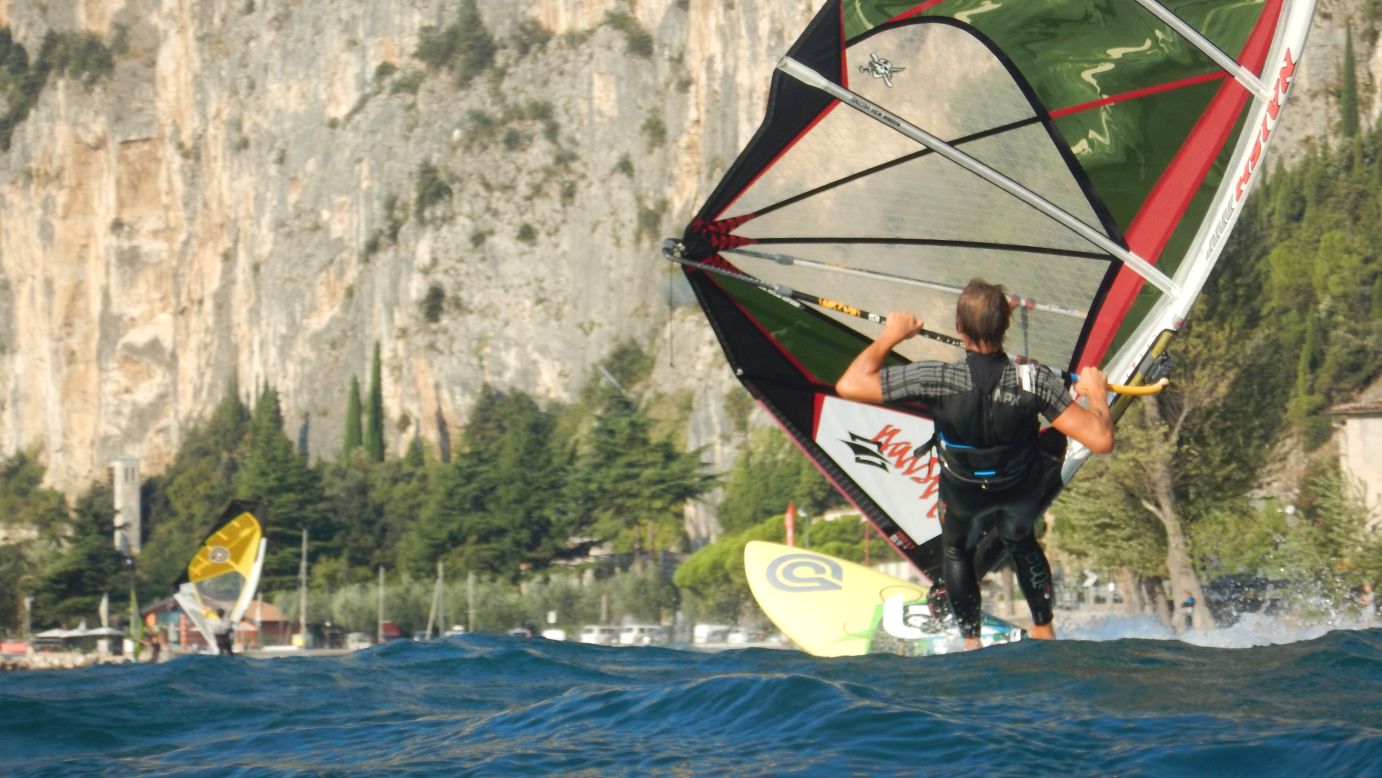 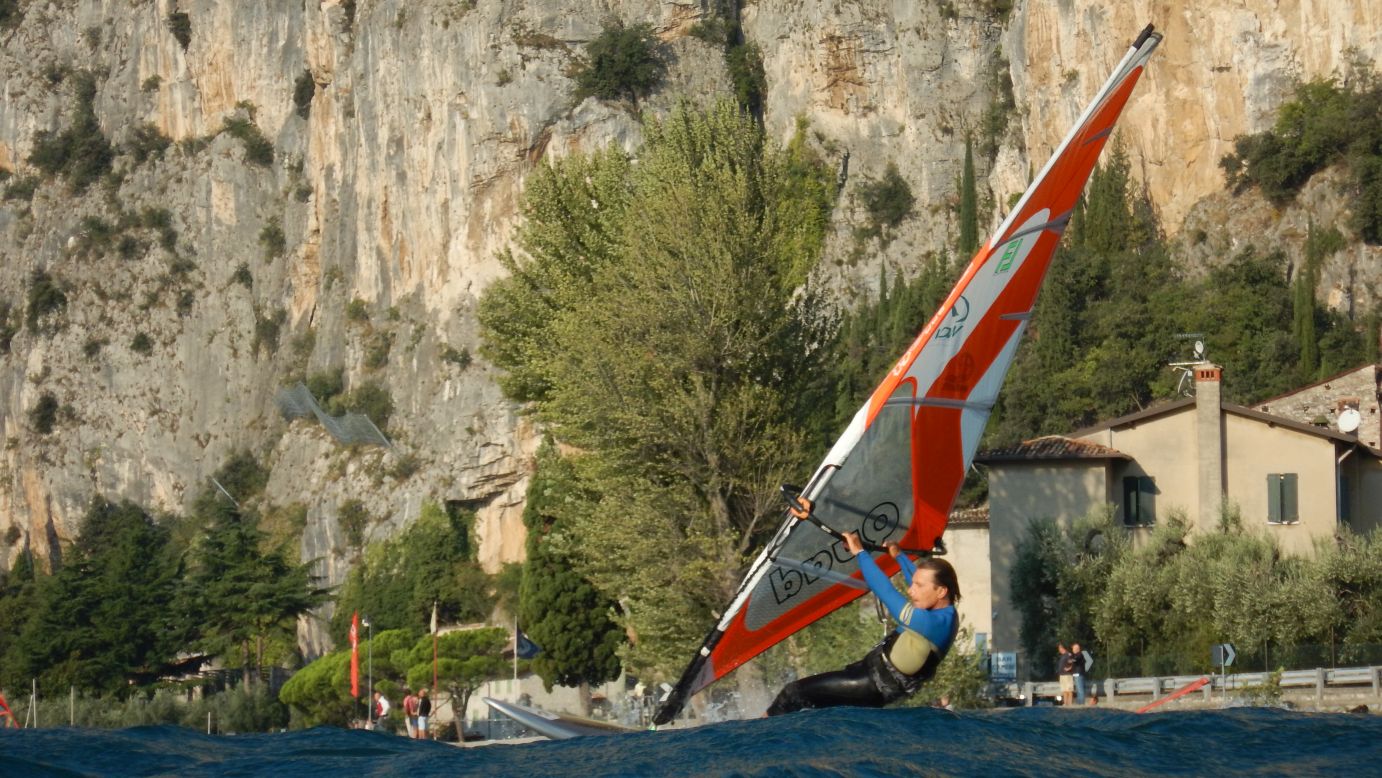 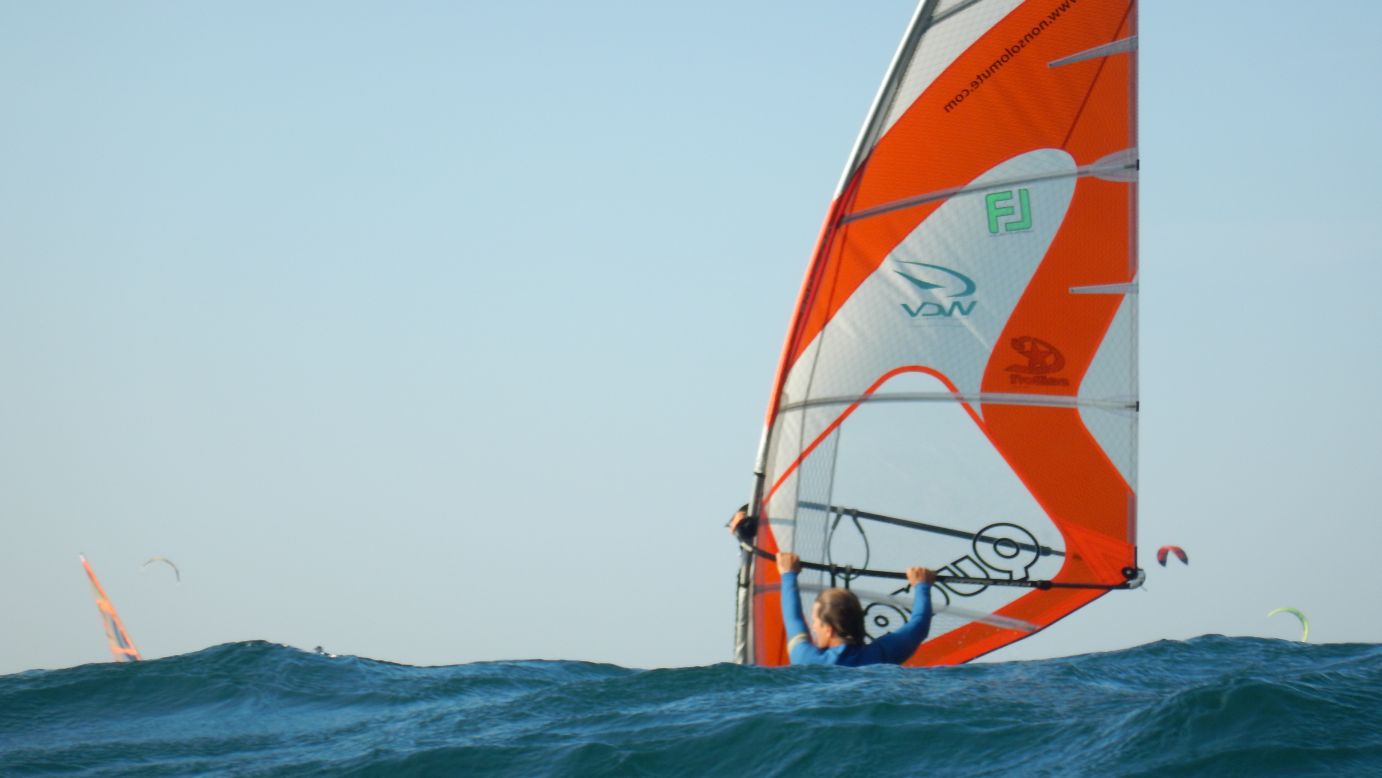 At 8.15 I entered into the water, having to be back by 11,00. I would say that for the majority of the session (two hours in water) I have been overpowered, although the Ezzy behaved well in such conditions. After all, even the Tabou Rocket has handled well Prà tipical waves, although with a Fsw board I would have enjoyed them much more (the waves of Malcesine and of Prà, often make me really crazy). Beforehand, I had placed the mast foot a bit backwards. The Rocket has never sunk with its bow, neither bumped on the waves. It was very fast and stable, and it was perfectly able to handle even these conditions. Obviously, it has not granted the maneuverability of a freestylewave board, and, also, it resulted a bit harder under my feet in managing the overpowered sail (more resistance in the water, also for the volume, despite I had chosen a 31 cm fin, instead of the 38 cm standard one). 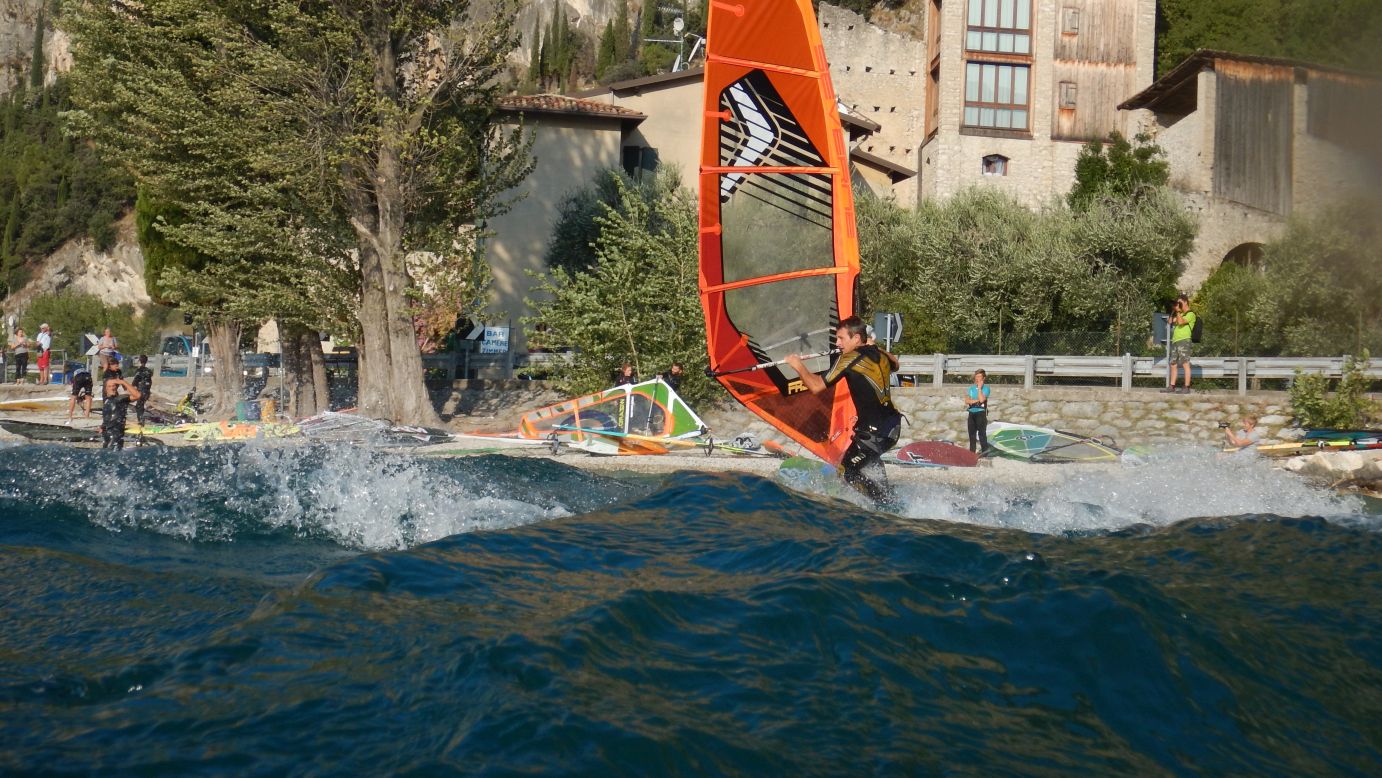 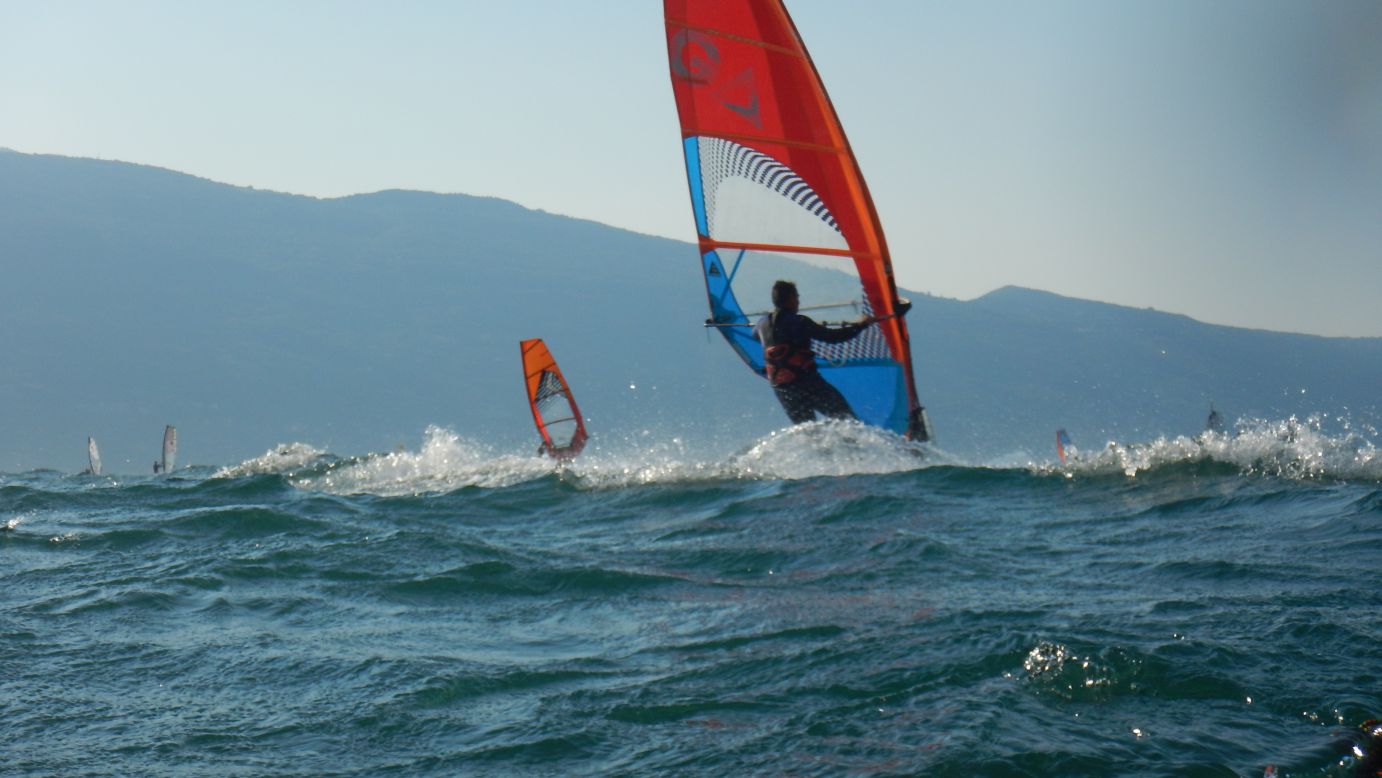 However, the session was a lot of fun, with the added value of the water temperature, still really warm (I wore a shorty 2 mm, at 8.00 in the morning).
With the freeride board, in these conditions, I went easily close upwind. So, with Ricky, we positioned ourselves upwind of the Prà beach, and we started to ride toghether for a lot of time. 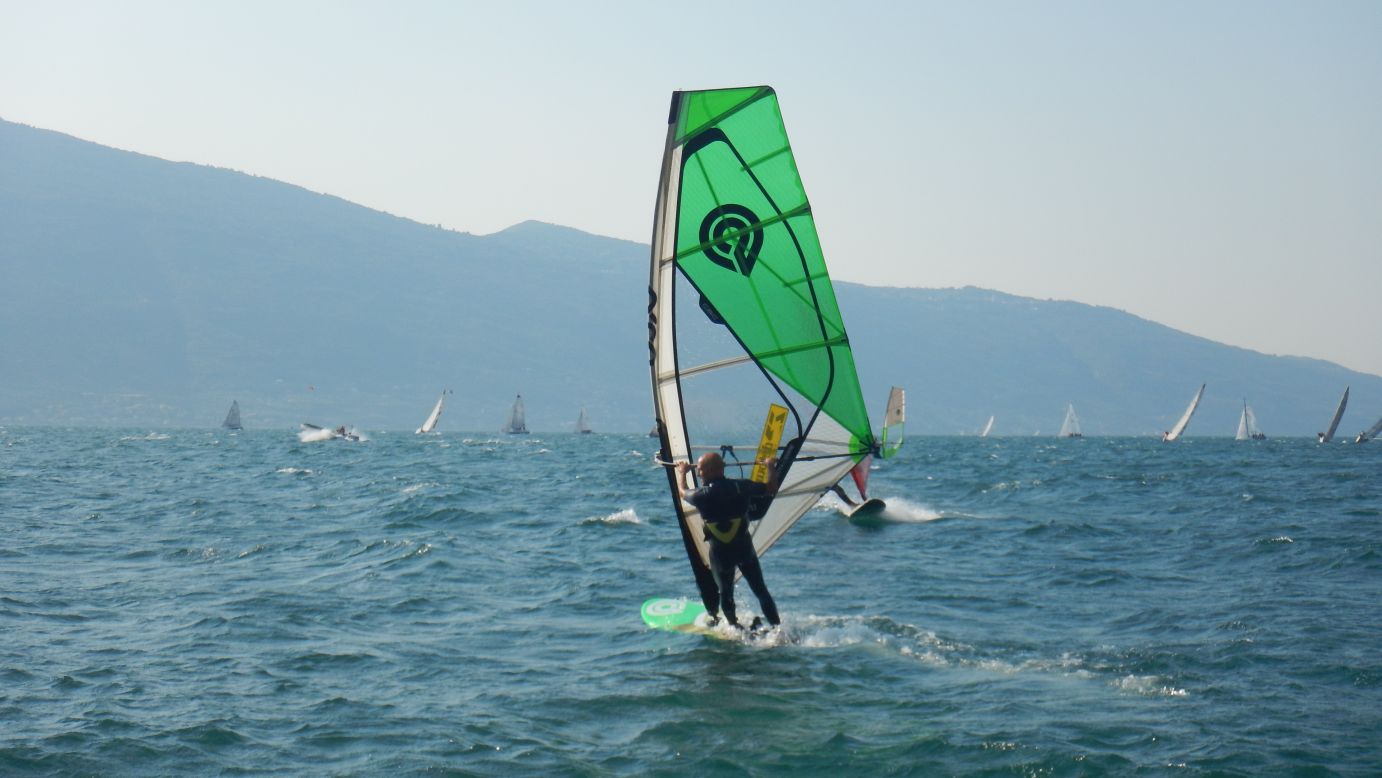 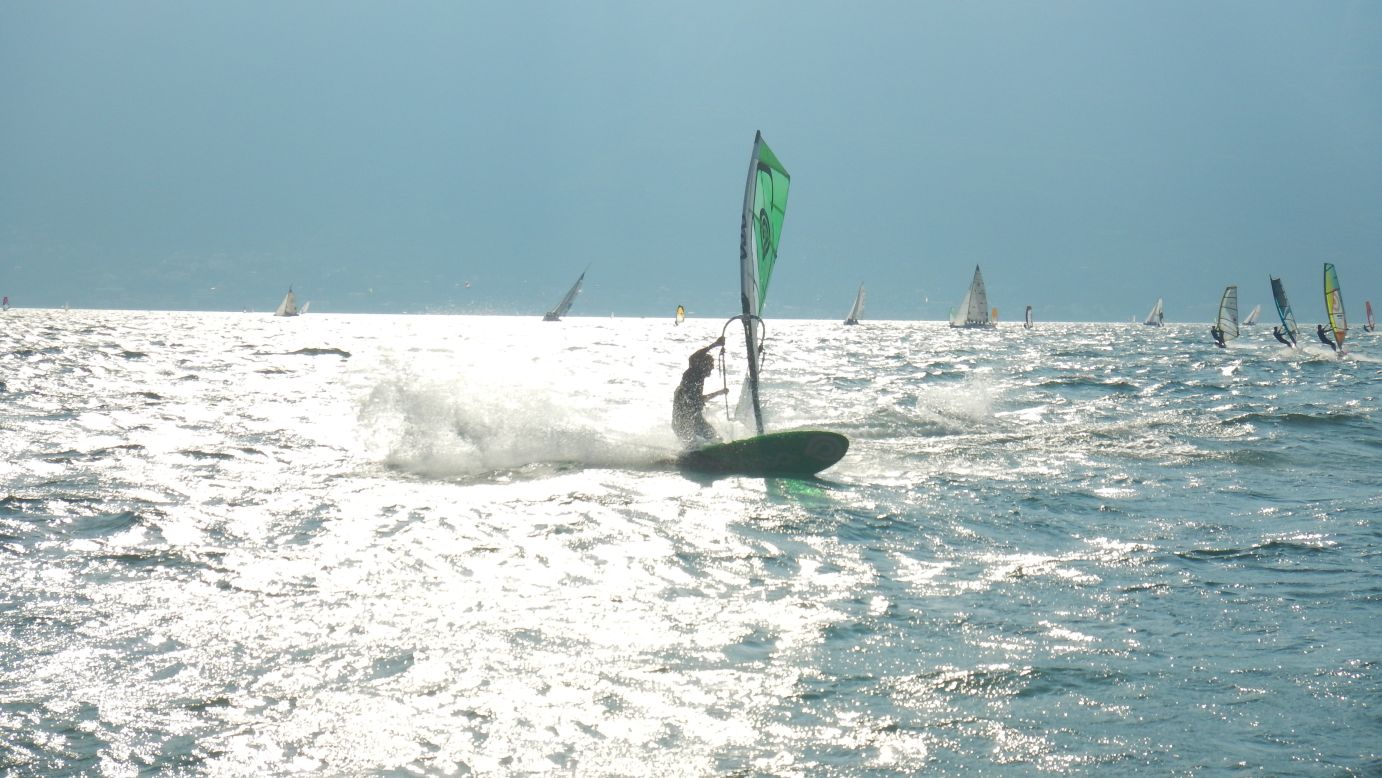 Going upwind a lot, I could try jibes repeatedly, after short rides. I could try the maneuver in relative peace, because, as I said, I did not have so many other riders downwind. My experiments with the jibe are continuing, although I must admit that the continuous change of gear does not make my life too easy (and overpowered sail did the rest). However, I would say, in short, that in power jibe bending your legs, and flipping the sail quickly, at least with strong winds, are a must.

At 9.00, the first multihulls (few) taking part to Centomiglia made their appearance Then, the spectacular Asso99 class boats (see video), and then the other racing cruisers started arriving. 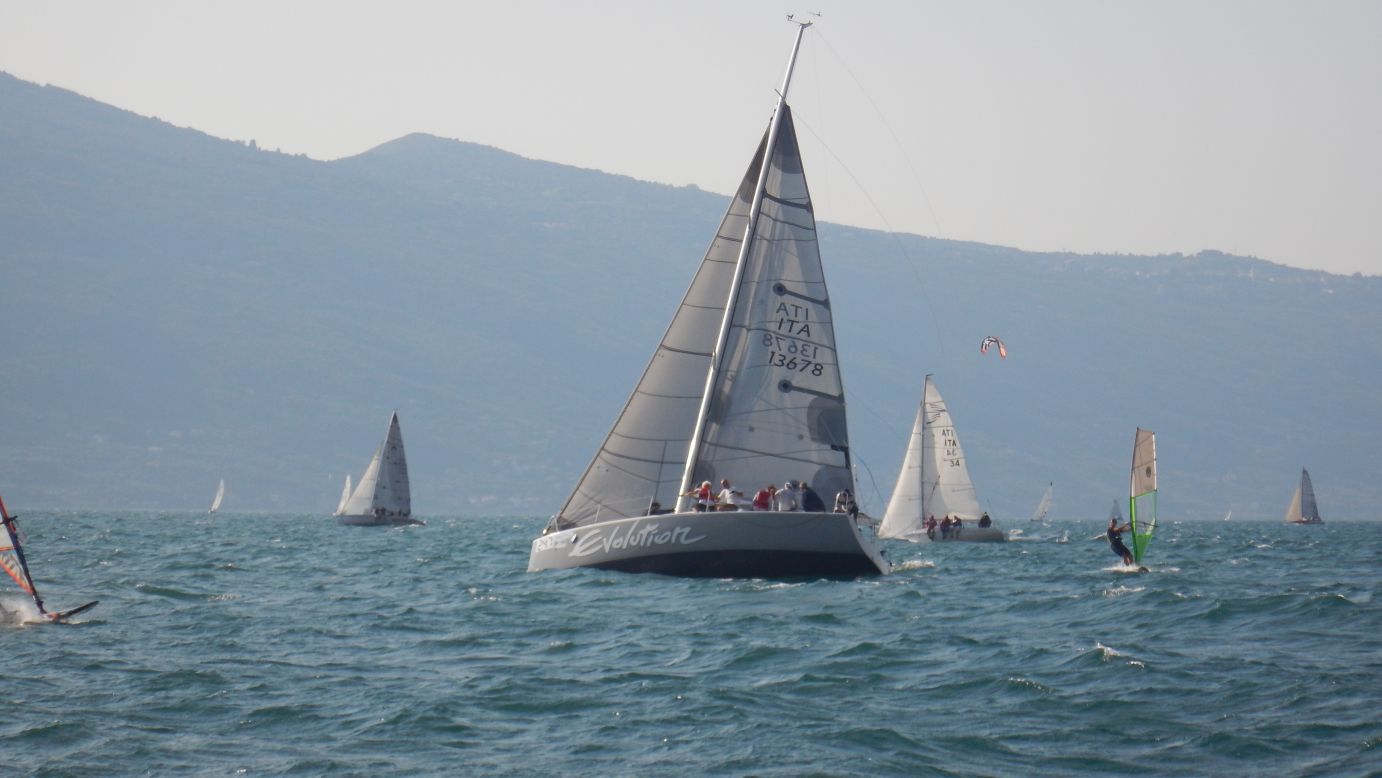 I must say that only for 15-20 minutes in the water the spot resulted, at least for me, impossible to ride because of boats passage. During this time, I preferred to have a break at the beach, and to take the opportunity to shoot a bit of movies and photos to those who remained in the water, including the ever-present Simone Grezzi, which is always nice to see riding and doing tricks (see also the nice video on youtube, of its session on 11 September 2016, in which it makes several speed loops). It was the occasion to meet and chat some friends, who is always nice to meet again at the spot. I resisted on the ground only 15 minutes. Then, after the bulk of the fleet had sailed away, I came back into water again, and until 10,20. 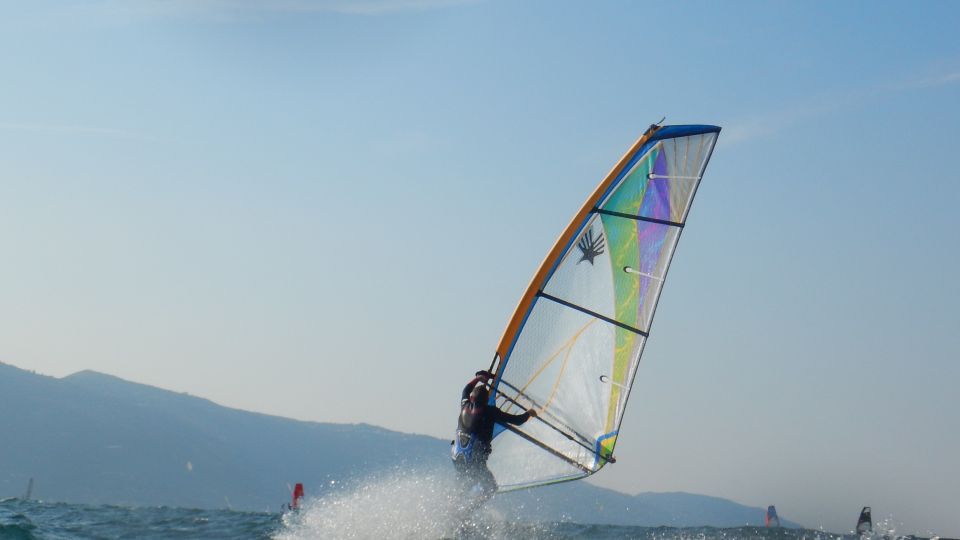 It was really hard to get out of the water, because the conditions were great (and in the final part of the session, overpowering was even less excessive). I went out only after having performed, both on port and starboard tack, two consecutive jibes. I have much more to work on the exit from the maneuver, but I continue to progress.

To exit from the water, wanting to avoid me to walk with gear along the walkway, I made the mistake of hoping to arrive planing at full speed to the beach just north of the big public parking. Great mistake ... I have experienced what it means to enter, gliding at full speed, into the last 50 meters before the beach, where there is virtually no wind ...... Feeling very strange (like suddenly falling into the void); final swimming unavoidable.

Very good session, although the choice of the board could be better.
This day teaches us that if you love this sport, you have to risk, and accept philosophically the "rip-off" days, to win the glory ones. In short, if there is sun, and there is some possibility to surf, you have to be there. And if there is low pressure? Well, even better: it means that somewhere there will be wind ....

I went away from the spot, listening to Rhymes and Reasons by John Denver, while driving my car. I know, it's not the usual "heavy metal" adrenalinic music that is the audio for many windsurfing videos, but it was the most suitable soundtrack to represent my state of peace and relaxed mood, for which, again, I have to say thanks to the Prà de la fam. And now, something tells me that, in this month of September, the Prà will give us even more beautiful sessions ...

Click here to enjoy the whole slidegallery of the session of 10 september, and also the great pictures taken by by Nuccy Wind on 10-11 september.

The video of the session of 10 september.

The video of the session of 11 september 2016, by Davide and Alice Migliorati.