On August 5, 2015, with our windsurfing group, we went to Lake Silvaplana in Engadin (Switzerland). It was a wonderful day, which gave us a session of great satisfaction, with the added bonus of a magnificent natural scenery. The Engadin is a dream place that offers leisure occasions 365 days a year.

And so, on the same lake where in winter time I do cross-country skiing .... I found myself to have a memorable session of windsurfing.

Forecasts gave, from some days, the return of hot weather in Milan, with southwesterly winds, high in the sky. These are the best conditions to enjoy the spot. In fact, they are conditions that ensure an air temperature of 20- 25 °C, more than comfortable to surf, and the establishment of a good breeze from the south. Forecast were confirmed. We had a gorgeous sunny day, with summer colors shining everywhere. The winds aloft provided further strenght to thermal wind. 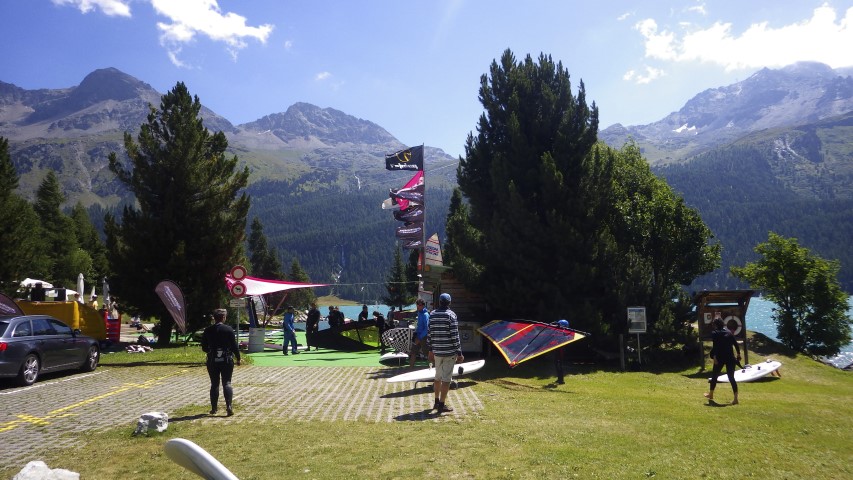 Escaped from the great heat of Monza, already going up the switchbacks leading to Maloja pass, the mind began to relax, and to enjoy the view of the pleasant images around. We arranged to meet each other (with other member of the group) at the Windsurfing Club Silvaplana (see spot review in the section of waterwind). The spot is very convenient, with parking immediately adjacent to the exit point. 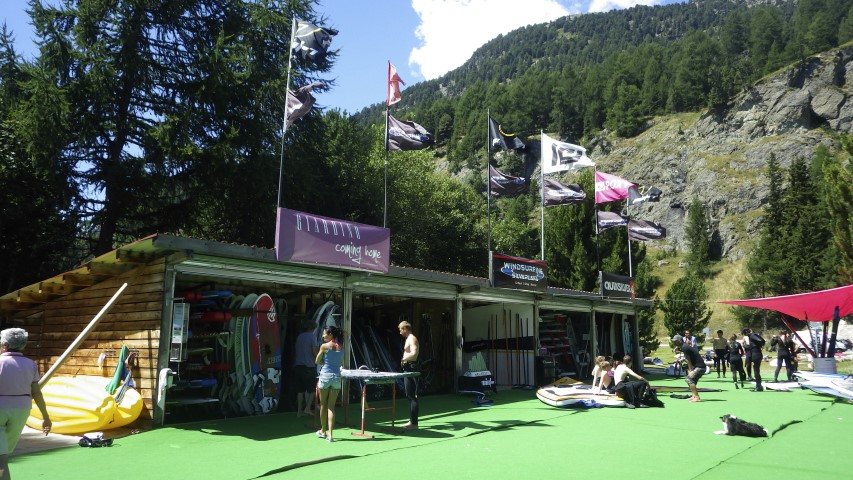 Since the late morning, the wind blew from the south, around at 10 knots. It always makes effect to see small cruisers sailing in these high mountain lakes (we are at 1800 meters!), surrounded by bright green pastures, dark green forests, and the rocky walls of the mountains.

At 12, riders with the formula and slalom boards and sails from 7.5 meters up (typically seen at the spot) began to enter into the water. 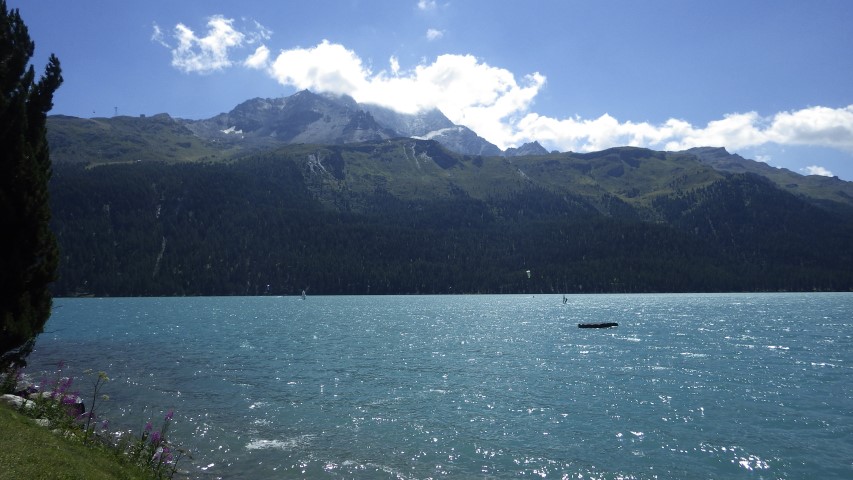 After eating a snack, we began to assemble our equipment. I chose the biggest sail I have, the Ezzy Tiger 6.3, rigged with the North Sail platinum carbon boom. As board, my trusty RRD FSW 111 liters. Daniele chose Gun Sails 6.4 Futura and RRD z-ride 145 liters. Giancarlo is waiting to understand the wind intensity.

Immediately, it became clear that the best wind had to be taken in the middle of the lake, surrounded by steep slopes of the mountains (the exit point is near the North end of Silvaplana Lake).

At 13,00, I entered into the water, as first. In the first twenty minutes I feared that the day was not one of the best. Wind was not fully extended, and with the 6.3 I was able to get and keep the plane only on strongest gusts. Around, slalom and formula riders sailing fast everywhere. 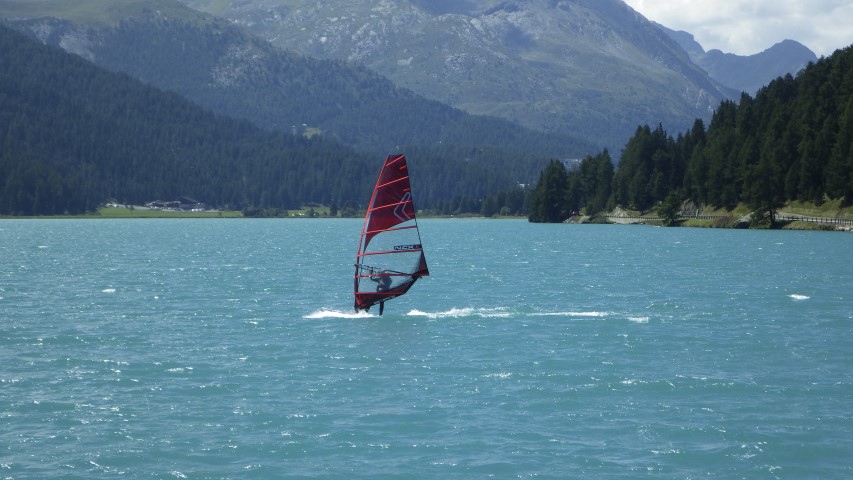 Past the first few minutes, and especially from 14,00 onwards, teh show began. The wind spreaded completely (although a few lows occasionally occurred) and reached an intensity of 20 knots. In the mountains, the air is less dense, and, at the same speed, pushes less on the sails. The 6.3, under these conditions, proved to be the right choice, with a slight overpowering on gusts, but sufficient to keep fast to overcome the lows. From 14 to 17, the big sails were not absolutely necessary (of course, unless you were not out with heavy boards, with more friction in the water).

Another element that has made the session really nice was the near absence of chop, resulting in the possibility to easily prove all the funboard maneuvers. Well, some more waves to do some jumps would be appreciated.

Blue and clear water ... comfortable air temperature. Conservatively, we went out with 4/3 mm wetsuit, which proved to be even slightly warm, when not falling frequently. 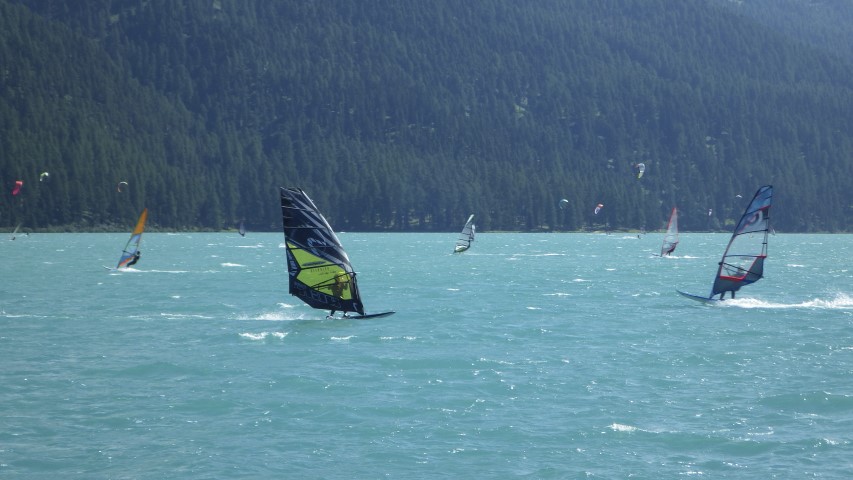 I've had the opportunity to try out some ideas. I tried to run the funboard tack very aggressively: determined entry into the wind, with the board still planing, and well supported by the push of the water, and pass on new side, just when putting my foot in front of the mast foot. The idea has proved very effective, with some successful turns in a very fluid way. Exit from the tack backwinded or not, depending on the time of switching on the new side. tack after tack, with the emergence of fatigue, the style has gone away..... I must say that I went out with the boom slightly too high, and I got arms tired for that, before deciding to geti it lower during the exit. 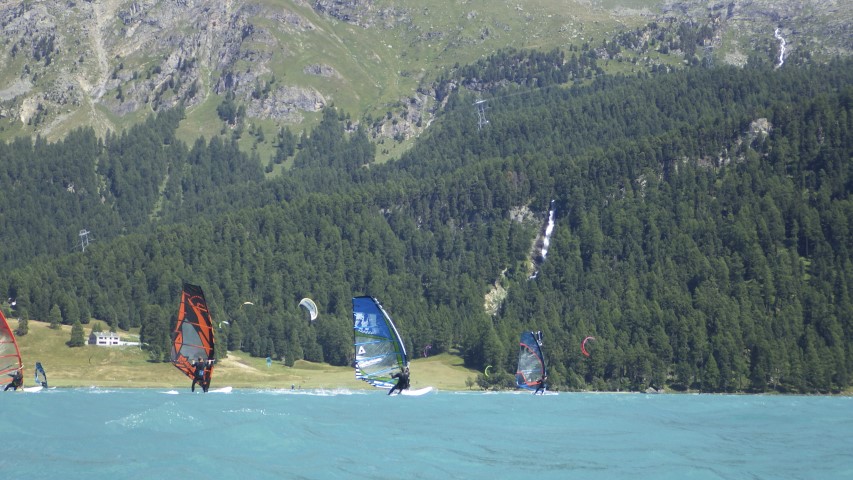 I took advantage of the this session also for practising with the power jibe (flat water and strong wind conditons cool for that), experimenting with some ideas. This time, I tried to jibe the sail, with the board almost abeam on the new tack. Generally, I fall with the rig upwind, trying to pass very quickly (almost downwind) on the same tack. I thought that the rig come upon me, because the apparent wind, in these conditions, greatly reduces (and therefore does not push downwind the rig after jibing). Delaying the hte flipping of the rig, and canceling almost completely the wind due to speed, the real wind should prevail and lead to an apparent wind that pushes downwind the rig. This would explain the advice, that you often find in manuals, to bring the rig quickly upwind to resist to the force of the wind.
I almost closed some power jibe , but I have always fallen at the end, probably, because I do not carry the rig forward with sufficient velocity, after changing tack. 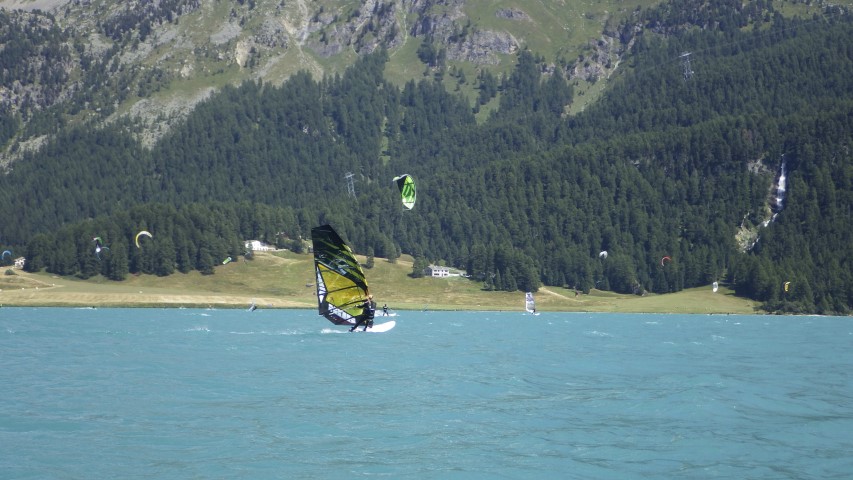 Daniele also enjoyed very much, and thanked me for letting him known a fantastic spot. Finally, I had to believe that he really gets planing! The proof is in the video of the session that you see at the bottom. Well, it means that our stage in which he participated over the years, have paid off.

The spot is safe (in case of drift, 100 meters from the exit point and you're back to shore, because the lake ends). It's also easy, and allows everyone to have fun (you have to do only attention to the water temperature if you ride in different periods from August, or in cooler summers).

It has been really hard to go away from the spot (also because we breathed a pleasant holiday mood ....). There were lots of surfers at the spot, all visibly satisfied. It would have been nice to enjoy the atmosphere of late afternoon, and then sleep in the fresh air of those mountains.

But we had to return to the valley, with the thermometer in the car that went from 22 to 35 degrees ...

However, we can not complain!

To enjoy the whole slidegallery of the session, click here.

Here below, the video of the session.