The excursion from Murtel (Silvaplana) to the Chamanna Coaz, in the upper Val Roseg, via Fuorcla Surlej, is one of the most fascinating itineraries in Engadine, as it takes place, almost entirely, in the presence of the Bernina, Piz Roseg, the Piz Scerscen and their glaciers, which dominate the upper Val Roseg. It is a trek at high altitude, which requires a fair amount of physical effort.

If you've never been to Fuorcla Surlej, you can't say you really know Engadine, says my hiking guide "44 steps - Itineraries for families in Engadine" by Andrea and Luca Merisio. So we went to explore the area on Sunday 19 July 2020. The image below is enough to make you understand that the guide is right. 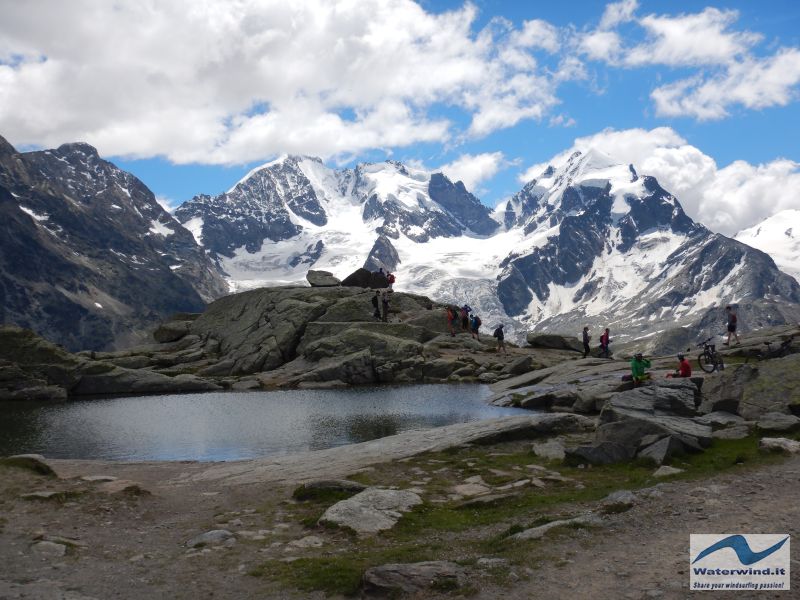 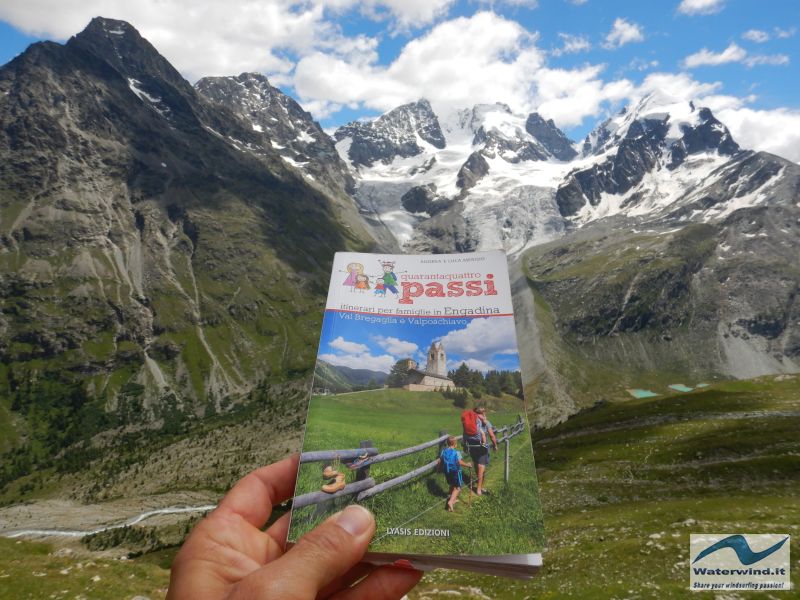 The itinerary described below takes place on a well-marked path, and without particular technical difficulties, but it should not be underestimated. First of all, the route plans to cover a distance of about 17 km, round trip (see track map below). Therefore, it is a rather long itinerary, even if with modest gradients. Secondly, everything takes place in a high mountain environment, between about 2500 and 2800 meters. Therefore, choose a day with favorable and safe weather conditions.

To begin our journey, having arrived in Surlej, a hamlet of Silvaplana, we took the Corvatsch cable car and went up to the intermediate station of Murtel (2698 m). The price of a return ticket for an adult (July 2020) is 43 CHF (just under 43 euros). You can also go up to Murtel on foot, via an easy dirt road. But, the times become decidedly too long, in this case, for a day trip up to the Chamanna Coaz. Ultimately, the excursion can be concluded at Chamanna Fuorcla Surlei, if you do not use the cable car (excellent excursion also by MTB or E-Bike).

In case you follow the itinerary described here, when you buy the ticket, find out about the timetable of the last cable car to go down, as, as mentioned, the route is long, and you have to do your calculations correctly for the times. 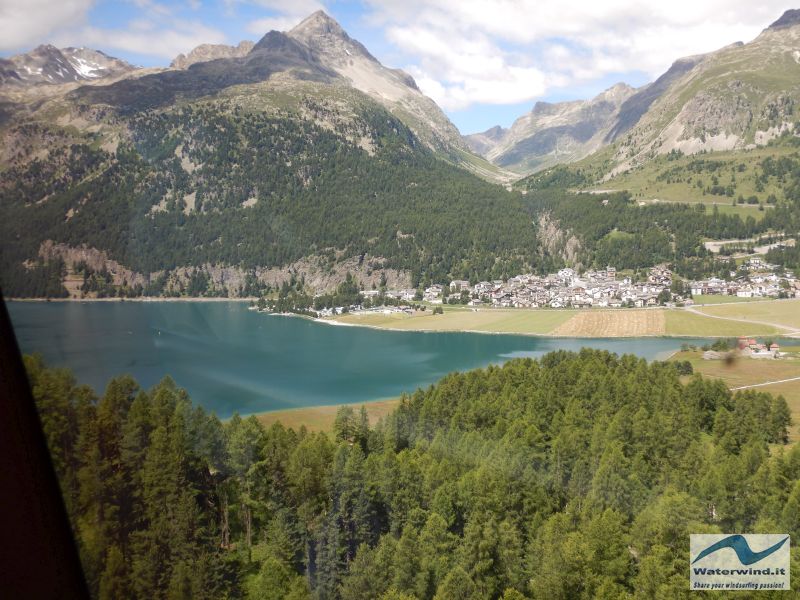 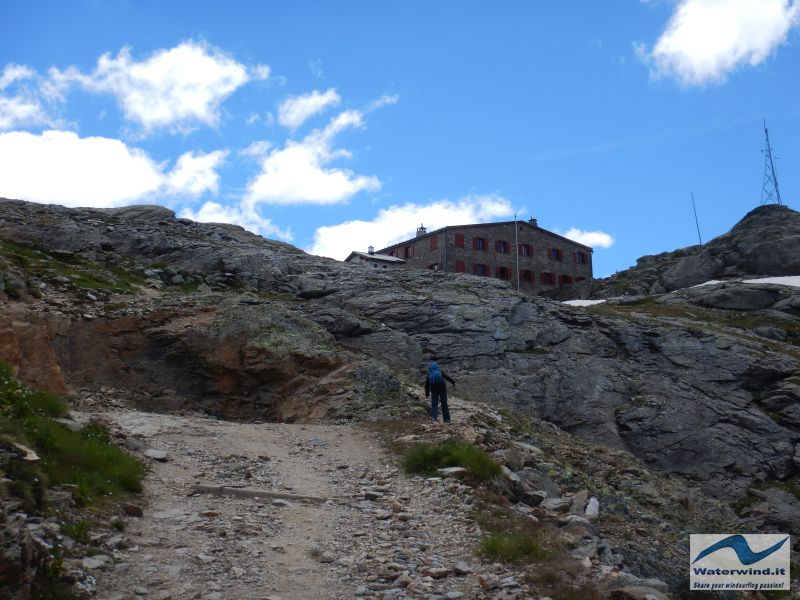 The area of the middle station of Murtel is somewhat altered by ski facilities and service slopes. To reach Fuorcla Surlej, following the signs, take the dirt road that descends, under the station, in a northerly direction, and then immediately turns east, to cover the entire basin at the head of the valley which from Silvaplana rises to the Fuorcla. Slowly, we move away from the areas most marked by the man presence, even if the dirt road up to the Fuorcla is quite frequented by trekkers, a little of all types, due to its brevity, ease, and the spectacular panorama which can be enjoyed from the Fuorcla.

Going up to the pass, in fact, if you've never been there before, you can't imagine the crazy view of the entire Bernina group that you will be able to enjoy once you reach it. The show, in fact, hides to the last moment. 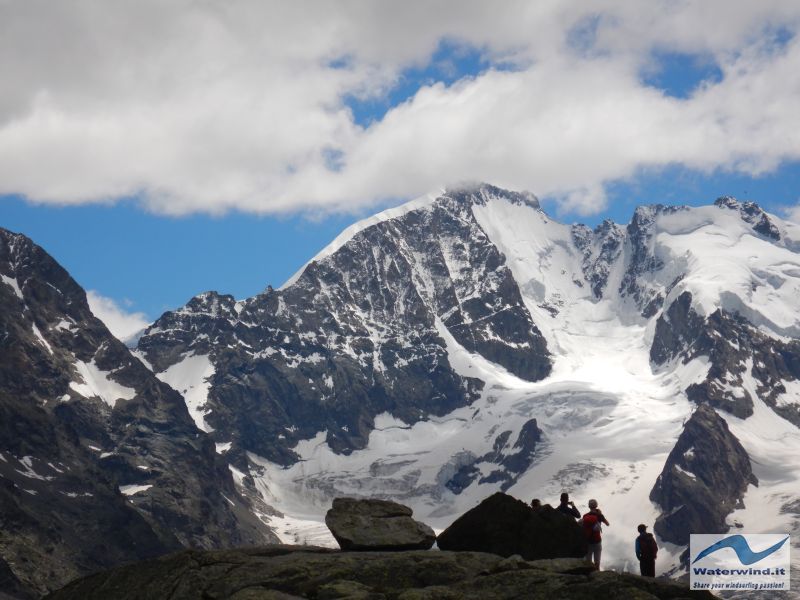 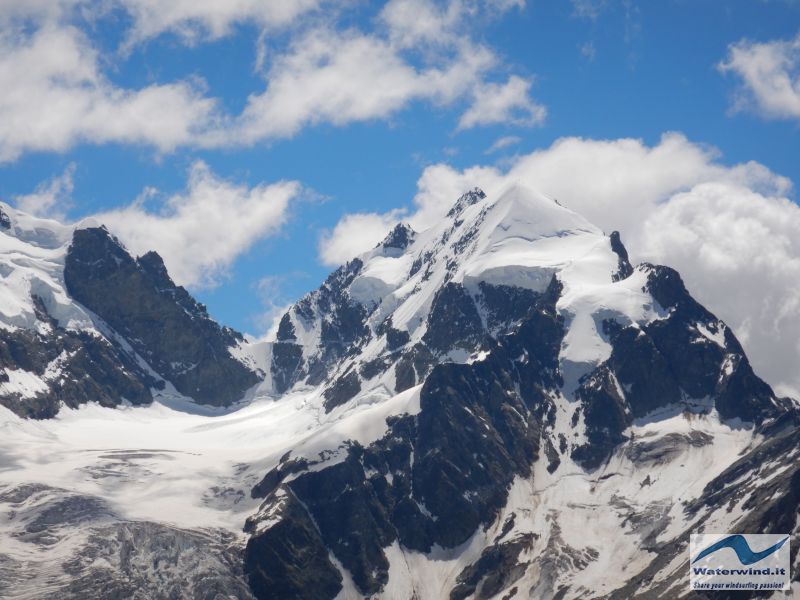 Fuorcla Surlej can be reached in 20-30 minutes from Murtel. Impossible not to exclaim a long "oooh" at the sight of the scenario that appears before us: on the right, the building in local stone and red shutters of the refuge; immediately in front of us a small lake, in which the giants of this area of ​​the Rhaetian Alps are reflected, with their immaculate glacial covers, which break into impressive locks, in the lower portion. Piz Bernina (4049 m), with the famous Biancograt crest clearly visible, Piz Scerscen, Piz Roseg, tower before us. Below the peaks, the Vadret da la Tscherva. Further to the right (south), the Pizzi Gemelli and the Piz Gluschaint, with the Vadret da Roseg and the Vadret da la Sella dazzling you with their whiteness. The guide says that once upon a time (last century, but also until the early 2000s) the glaciers were much more extensive, they descended much lower in Val Roseg, and branches joined together down at the bottom of the valley. Now, they stop at a higher altitude, and where they used to arrive, a lake has formed, the Lej da Vadret, which is actually no less spectacular.

After a contemplative stop, and to take a few photos, get back on the road, following the indications on the signs, and taking the path that descends towards the south and then towards the east (in the first part). From here, it takes 2 hours to reach the Chamanna Coaz. It's about a time, essentially right. Those with a good pace can take 1 hour and 40/50 minutes, but no less (unless you are a mountain runner - but you wouldn't enjoy the view, doing so). Also, consider that you will often stop to admire the view and take pictures (if you are interested).

Leaving the refuge at the pass, you will also get away from the crowds, and you will enter a magical and silent environment. In fact, one tenth of the trekkers who have reached Fuorcla continue on to Chamanna Coaz.

Just a few minutes from Fuorcla, we already saw a large bird hovering in the sky, hunting, and distinctly heard the alert whistles of the marmots on the slope above! 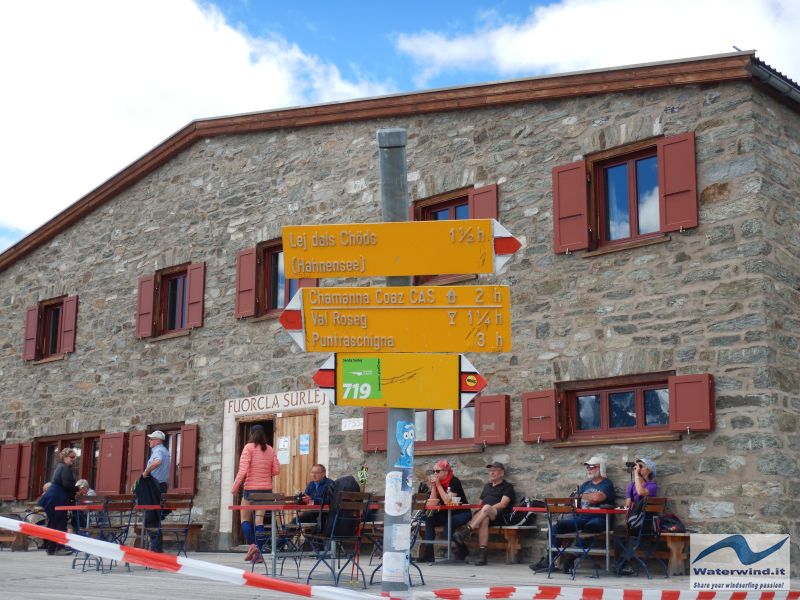 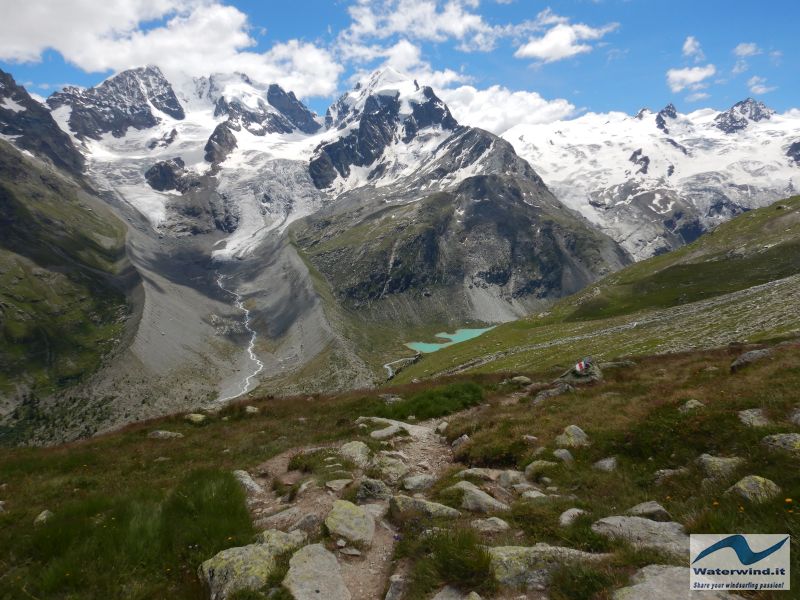 The first part of the track descends progressively (only in some stretches more decisively), and takes you from the 2753 meters of the Fuorcla to around 2500 metres, with several flat sections, too. The path is always evident and well marked (white-red trail markers) and makes a long arc, first towards the east, and then again towards the south, entering the upper Val Roseg. The Valley will appear almost completely from more or less halfway through, with the plain where the Hotel Roseg stands in evidence, and Pontresina in the distance. Some meadows, a sort of panoramic terraces, are suitable for a possible end of your excursion with a packed lunch, if you don't want to do the entire itinerary. The Bernina and the other peaks watch you all along the way.

Often you will ford some streams that descend from the slopes of Piz Corvatsch. These are simple fords, sometimes facilitated by the aid of some wooden bridges. In this regard, we point out that, at a certain point (40-50 minutes' walk from the Fuorcla), the original path is partially blocked by some large boulders, with an evident arrow inviting you to descend, to reach a small bridge, located approximately 100 meters below. Unless you take the track after a period of heavy rains, or in late spring/early summer and in full thaw, ignore it, and carry on, climbing over the boulders. The ford that you will have to face, in general, is simple, and can be easily overcome with a little malice. In any case, carefully evaluate the situation you are facing at the time of your passage, as, obviously, the conditions of the streams and their beds vary greatly from year to year, and depending on the time of year.

The marmots will keep you company with their whistles for a good part of this stretch, but they will hardly show up in the central hours of the day, when most trekkers pass or stop on the path. It will be easier to see them early in the morning, or, as happened to us, from mid-afternoon. 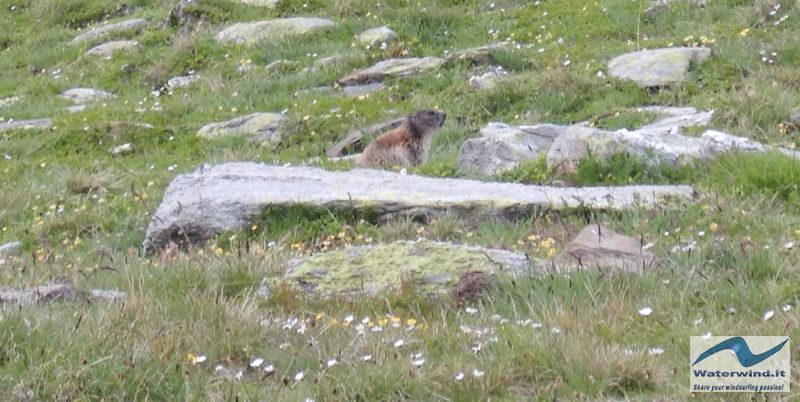 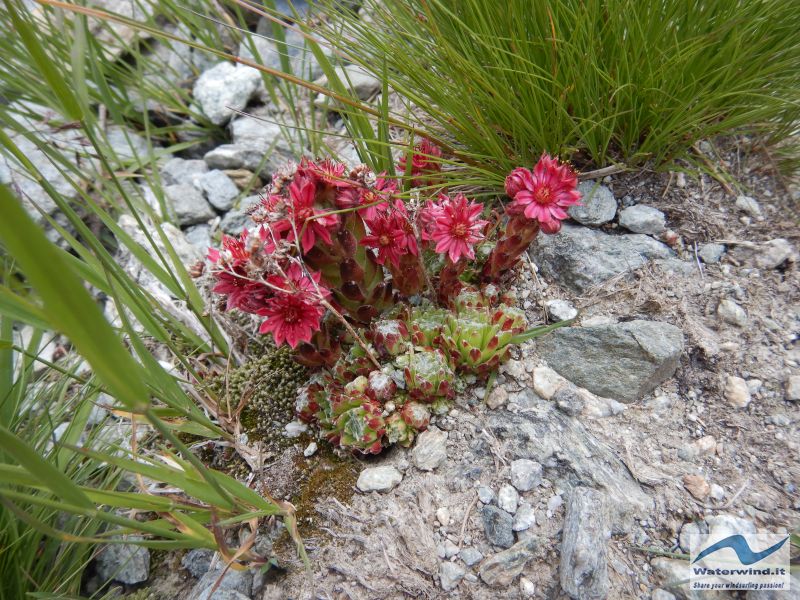 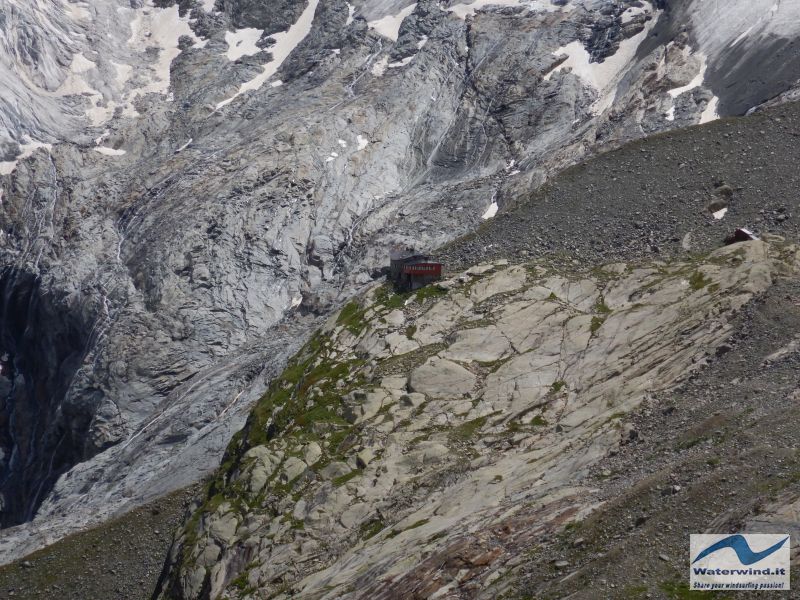 After the lowest point of the route, the path begins to climb again, and will take you over a massive ridge that descends from the Corvatsch, beyond which you will see the Chamanna Coaz on a rocky outcrop in the distance. And you can't help but think how far away it is. You will arrive here, after just over an hour from the Fuorcla, and you will still have about an hour left to reach the refuge. Arm yourself with patience and carry on. The path is still long, but always without particular difficulties. In the meantime, you can distract yourself by enjoying the view of the blue-green Lej da Vadret below you, at the bottom of the valley, and the Vadret da Roseg and da Sella, which steal the scene from Piz Bernina in an increasingly decisive manner, and to his siblings....

Maintaining the altitude and turning slowly towards the East, you will reach the center of the head of Val Roseg, and ever closer to the refuge, which you will finally reach after a last stretch between rocky plateaus, streams, small pools of water, and springs .

The Chamanna Coaz is an eagle's nest, anchored on a spur of rock, which overlooks the seracs of the glaciers already mentioned (Roseg and Sella), from which, today, thunderous waterfalls originate which continue the work of engraving the rocks, once produced from ice. 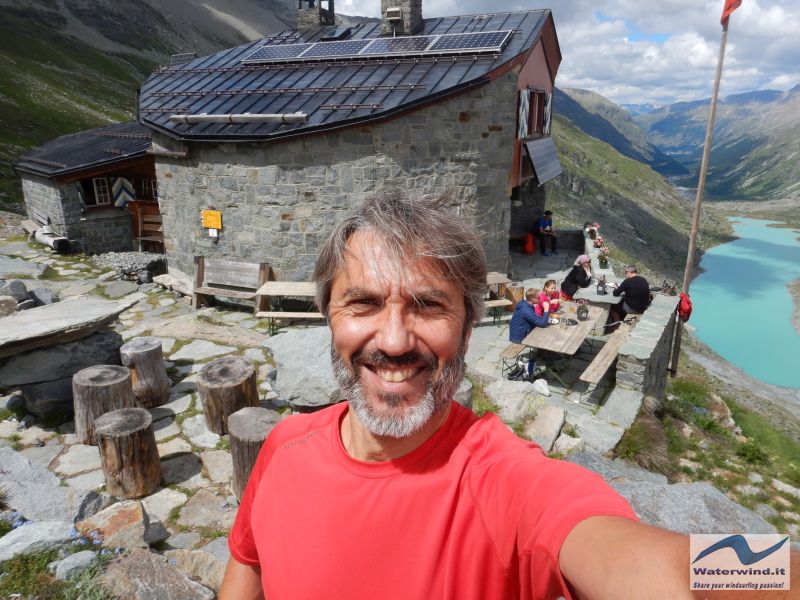 Rest well, refresh yourself, and enjoy the view, keeping an eye on the clock if you have to go back to take the cable car in Murtel to go down to Surlej. In this regard, we point out that a valid alternative could be to descend from the Chamanna Coaz down to Val Roseg, to complete a sort of circular route, also with the help of public transport. To descend to Val Roseg, you can return to the path towards Fuorcla Surlej, and take the track that descends to a crossroads (marked by clear signs), about 30 minutes from the refuge, on the way back (actually, further on, there are other similar crossroads to go down). However, if you want to complete the tour in one day, you have to leave early and reach Chamanna Coaz by 12.00 at the latest (to do things reasonably calmly). In fact, it will take 4 hours to get back to Pontresina. Arriving in the city around 17.00, you can then take the postal bus back to Silvaplana. Or, you can treat yourself to a dream night at the Hotel Roseg, and split the route in two, for a fabulous trekking weekend (Val Roseg, in fact, is stupendous - read the article about one of our excursions in this valley).

We, on the other hand, returned, legs on shoulders, to Forca Surlej, and to Murtel just in time to take the last cable car at 5.25pm. We took 2h and 15 minutes (1h and 50 at Fuorcla, 25 minutes more for Murtel), instead of the 3 hours indicated by the guides and signs. To rest after the trip, we lay down on the grass in front of the Silvaplana Kitesurf Center, enjoying the pleasant breeze and the warm afternoon light of what will remain for us a magnificent and very long summer day.

P.S. Grüezi ("I greet you"), or Grüezi Mitenand ("I greet everyone", when you meet several people) are the words used in Swiss German to greet other hikers met on the path in Engadin, and in other areas of German speaking Switzerland. It is the contraction in Swiss German of the German "Grüß dich " i.e. "I greet you", while "mitenand" stands for "miteinender" or "together". Greeting the locals in their language is a gesture of cordiality.

Read also the article on the excursion to Cavloc lake, and the one about Blaunca and Grevasalvas trekking.

The video shot during the trekking