I have been walking in the mountains for more than 40 years, and I still haven't gotten tired... If the walking itinerary is like yesterday's one, in Fedox valley, in the Engadin, Switzerland, with its enchanting autumn sceneries, boredom is a really unfamiliar state of mind. In this article, we describe the trek that leads you to discover this valley, and the adjacent Fex valley, starting from Maloja, on the shores of Lake Sils.

There is a short period, about a week/ten days in October, in which the high mountains dress up in an almost moving autumnal dress, dominated by the bright tones of nature preparing for winter. It is a window of time that offers a show that is really worth not losing.

So after last week's beautiful excursion in Val Trupchun, I wanted to complete my exploration of the Engadine by discovering Fedox Valley, where I had never been before. This area offers many possible different itineraries. In addition to entering Fedox valley, you can more simply reach Ca d'Starnam, and then stay halfway up the slope, and go to Fex valley, with a beautiful high-altitude itinerary, within almost everyone's reach.

To reach the starting point of the itinerary (see map in the article), leave the main road at the bottom of the Engadine valley, at the southern end of Lake Sils, turning into Plan Cuncheta road; park in the free, unpaved car park, which is located under 1 km after the turn, just before the road becomes traffic limited. Leave the car and continue along the paved road towards the north, towards the hamlet of Isola.

A few hundred meters after the start, the road passes in front of a place dear to me, Camping Plaun Curtinac, where I often spend some of my best summer weekends in the Engadin, in a tent.

After the campsite, the road climbs a few tens of meters and enters the wood (if you wish, there is also a path that remains on the Lake Sils shore, and which you can follow up to the turn for Fedox valley, in the locality of "Brusciabraga").

After about 2 km from the start, in sight of the hamlet of Isola, where you pass on the way back, in the locality of Brusciabraga, you find the turning (to the right) to take the road, still suitable for carriages, which leads to Fedox valley (but not only) . The signage is clear and you can't go wrong. From here on, the road begins to climb moderately, and allows you to admire some truly magnificent images of Lake Sils and the surrounding mountains, which will trigger your compulsive photo shooting .... (see our rich slidegallery of the 'excursion). The blue lake, the brown meadows, the yellow larches, which stand out in the midst of the pine trees and dark green spruces, are a truly exciting combination. 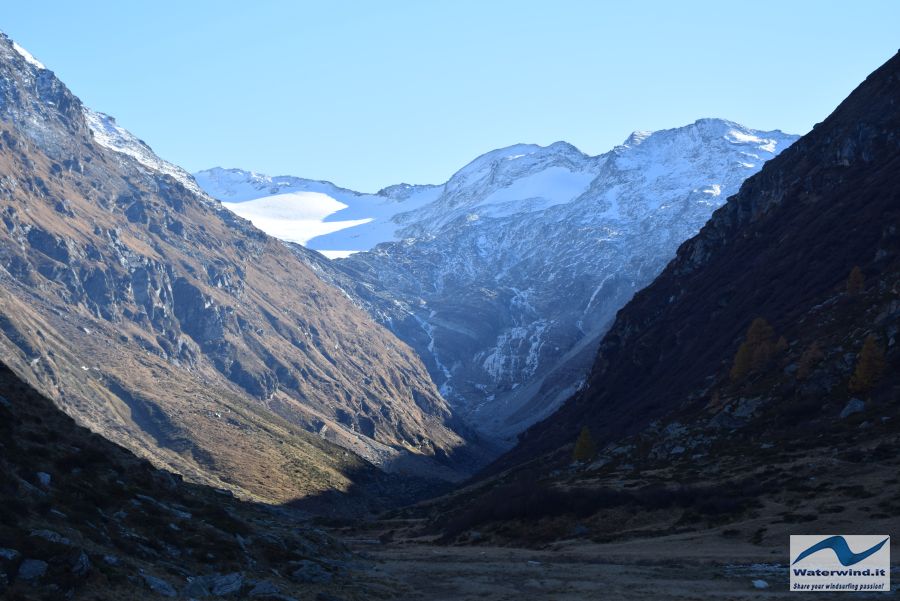 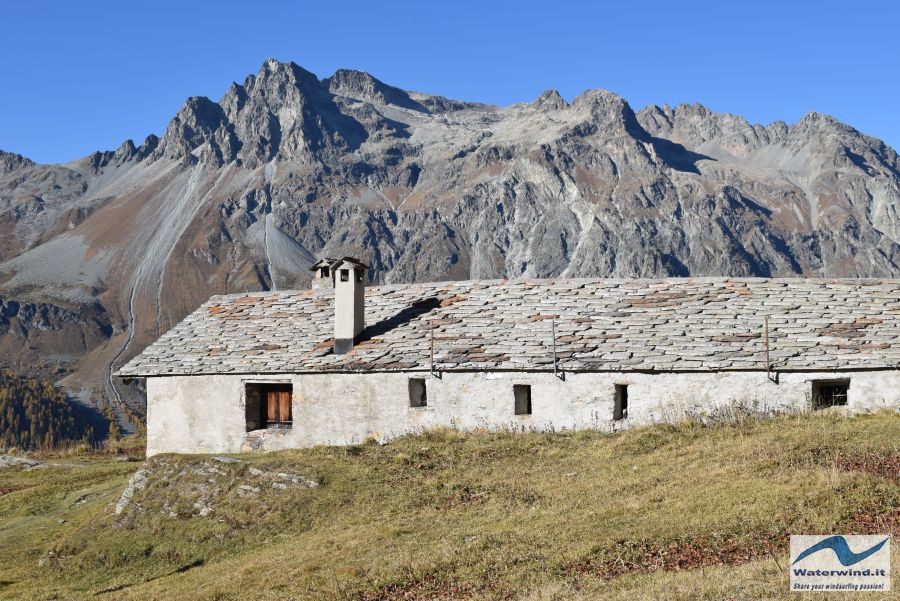 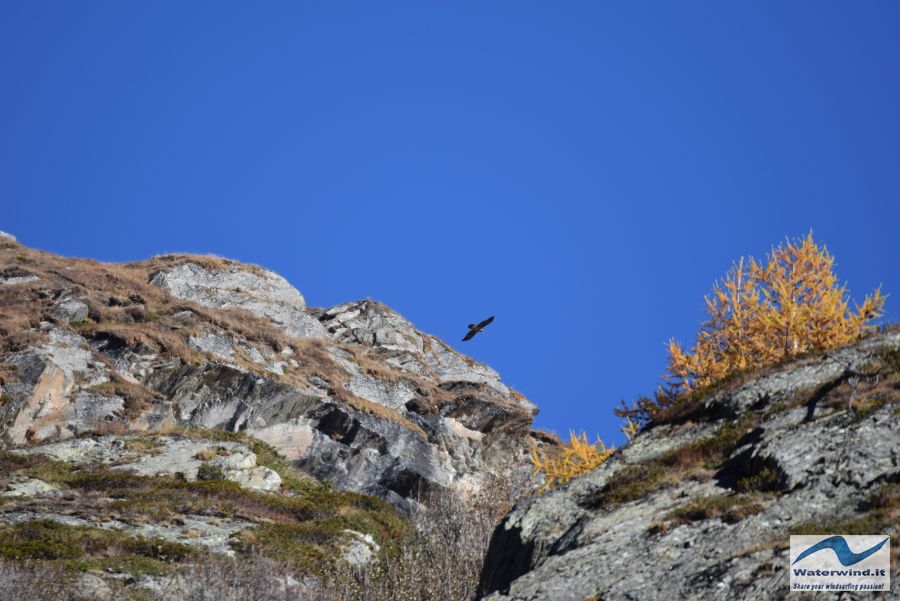 The road takes you slowly to reach the 2024 meters of Ca d'Starnam (about 40 minutes from departure), a large mountain pasture still in use. To the north, on the opposite slope, and on a very sunny slope, is Alp Petpreir, another beautiful mountain pasture, which we will pass through on our way back. If you want to make a tour, however very beautiful and panoramic, without going into Fedox valley, from Ca d'Starnam, you can immediately follow the signs for Petpreir, which you will soon reach, after passing the Ova da Fedox, passing over a nice wooden bridge.

Bear in mind that this first part of the route, in the early morning, remains in the shade, and, even on mild days like that of our trip at the end of October (zero freezing point at 3200 metres during the day), temperatures can be just above freezing. So wear appropriate clothing.

Behind Ca d'Starnam, you have the detour to Piz da la Margna, a climb for expert hikers, which could be my goal for next summer. For Fedox valley, instead, continue along the path that enters the valley - south side, and remains for about 3 km just above 2000 metres, with continuous slight ups and downs. It is advisable to carry out the route in the direction of travel followed by us, as this side of the valley goes into the shade in the early afternoon, in autumn. At the bottom of the valley, you begin to see the glacier - Vadrec da Fedox - which descends from Piz Fora and Piz Fedox. Beyond the ridge between the two mountains is Chiareggio, in the upper Valmalenco, Italy.

In the Fedox valley floor, meadows show the signs of a rather intense grazing. Along the way, around the stream, you will easily meet the goats, which depend on the Ca d'Starnam. The lawn is shaved..., and only the rhododendron bushes and some blueberries survive the goats. There are practically no trees. From a panoramic point of view, therefore, it is not the most fascinating valley among those in the area. But the charm of Val Fedox is another; it is a little frequented valley, and, in its upper part, rather wild. You will find yourself immersed in truly unusual silence and peace, almost without meeting other hikers. It hasn't happened to me in a long time to experience this situation. I stopped several times to enjoy the quiet of the valley, "disturbed" only by the gurgling of the waters of the Aua da Fedox stream, in the stretches where the path approaches its course.

Halfway through, you have the possibility, across a wooden bridge, to cross the stream, and take you to the opposite side of the valley, to shorten the route and start going back.

Going on, almost 7 km from the starting point, near the final part of the valley tour, the path suddenly gains a hundred meters of altitude, winding between some boulders, to pass a rocky rampart, which the stream cuts with a gorge engraved at the your left. Beyond this bastion, a small wooden bridge takes you to the other side of the valley; a few meters above the bridge, half-hidden among some boulders, Alp Fedox rises (2107 metres, 2 hours' walk from the start), where, if you like, you can lie down in the sun and take a break for your packed lunch.

From the Alp, continue on the northern side of the valley, along a path that loses altitude rapidly at the beginning, and then continues calmly, well exposed to the sun (take this into account, if you follow it in summer), up to Petpreir. Every now and then, stop and raise your head, because it can happen, as happened to us, to admire the majestic flight of an eagle.

The Alp Petpreir is a really nice place. It stands on a terrace with an aerial and exciting view of Lake Sils. On the opposite side of the Engadin (the western one), you can also glimpse the small villages of Blaunca and Grevasalvas, which lie on a sunny plateau, and which are reached by a wonderful itinerary, described in another article of ours.

After contemplating the beautiful scene, we felt the fatal attraction for Fex valley, another enchanting place, to which we are emotionally attached. We then continued north-east, and, passing an easy saddle and another panoramic point, we entered Fex valley, heading towards Crasta, and the little church of Santa Margarita (about 30 minutes from Petpreir).

Fex valley is really different from Fedox valley. The men presence is more evident, but here men have contributed to further beautifying the valley, scattering it with historic houses and buildings, and well-kept pastures and woods. And at the head of the valley, the Vadret dal Tremoggia, which descends from the Pizzo Tremoggia, and which stands out white above the yellow of the larches, and under the blue of the sky. In the garden of a house, we were struck by some children, still free to play alone outdoors, and who were having fun managing a small fireplace.... 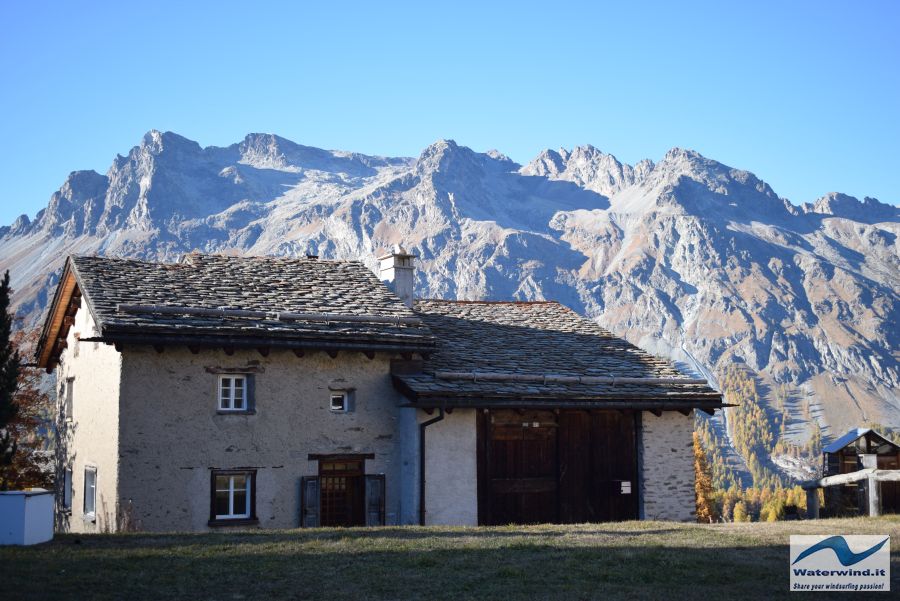 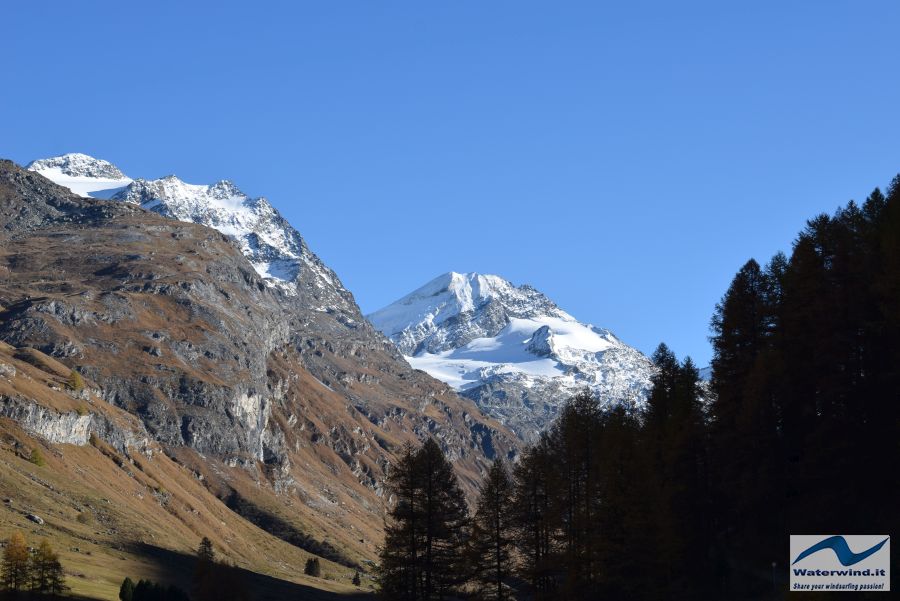 After wandering around Crasta and the lower Fex valley, we started to descend to return towards Maloja. We first followed the signs for Sils (from the church of Saint Margherita), but we stayed along the paved road (Fexerstrasse and then Crastatscha), to try to stay in the southern part of the valley. Then, we followed some signs for Isola, and we took a road, in the locality of Vauglia (see our track map), which was a dirt road, at the beginning; then, it became a path, which brought us back again to overcome the hump, at about 1940 meters above sea level, beyond which we re-sighted Lake Sils.

This section of the path is very beautiful; it descends into the woods, through which the sun's rays filter, and among which the glittering lake below can be glimpsed. The kilometres walked, at this point, are many, and a little tiredness can emerge. The path, with a few hairpin bends, quickly loses altitude, until it reaches Isola. Beware of frozen water on the course, in some places where streams intersect. Isola is worth a short stop. It is one of those peasant hamlets which still survive today in the modern tourism of the Engadine. If you want, you can quench your thirst or refresh yourself at the bar-restaurant of the Hotel Lagrev. 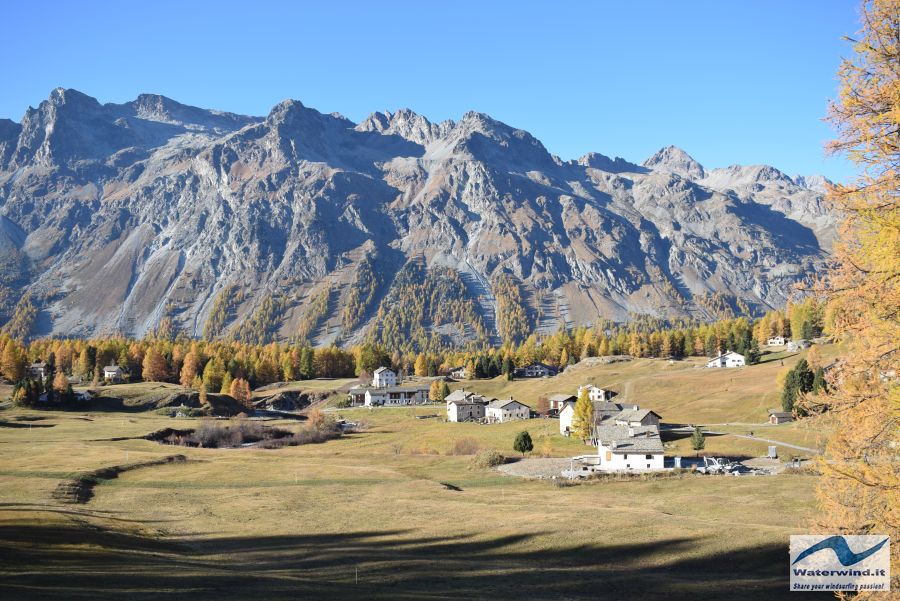 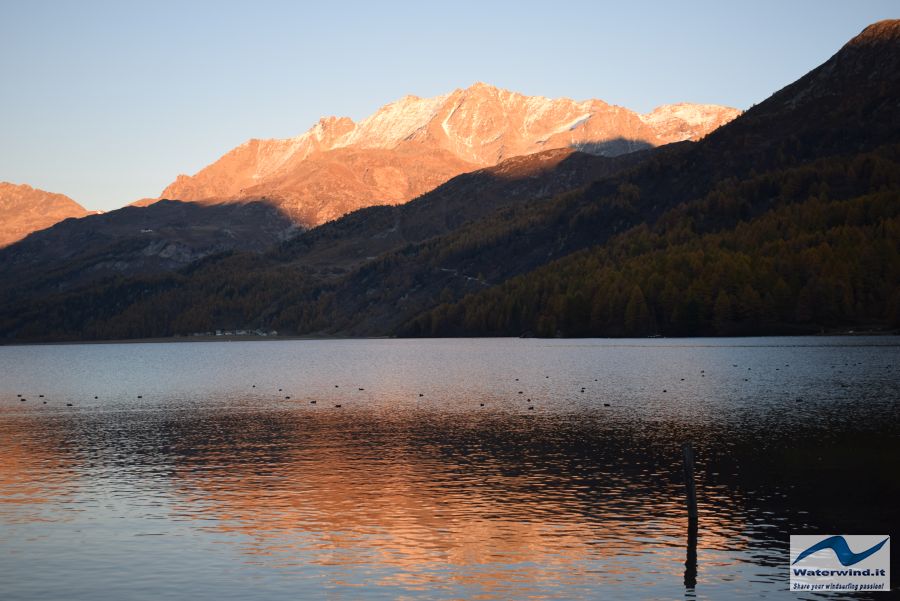 From here, you still have about 40 minutes of pleasant walk (in winter it's the cross-country trail), along the lake shore to return to Maloja. The entire itinerary we have covered will lead you to cover almost 21 kms, in 4 and a half hours of effective walking, and 514 meters of positive difference in altitude. Technically not difficult, but physically not trivial. But above all, regenerating.

Click here, for the complete slidegallery of the excursion.