We guessed it! Garda gave us a nice summer weekend, full of wind, especially with a Peler not to be missed, on Sunday, August 19.

In the Waterwin d forum, we reported the possibility of Peler this weekend, and so it was, even though, with Meteo-allerta.it constantly changing the scenarios, it's not easy to be sure.

Anyway, Friday, in the early afternoon, we moved back to the northern Lake Garda. On Friday, by the way, a really good Ora wind rose (around 20-25 knots, depending on the spot), but we did not have time to catch it. We consoled ourselves with a chat and an aperitif with Luis Marchegger (agent for Italy for Neil Pryde and JP-Australia) at the Winds bar in Torbole.

The morning after, Saturday, Malcesine gave us a good Peler that we caught at the Retellino spot, in Malcesine. The spot was crowded with lots of known faces and friends. Once arrived on the spot, I immediately met Nuccy, the Gianky's wife, who came down, rather sleepy ....., from the van (it was about 6.30). I suggested to Nuccy to find a husband with more civil habits ..... Also Andrea Cucchi (boss of Point 7) was there to try some new 2019 sail. Among friends, Massimo, as well as the faithful Andrea. 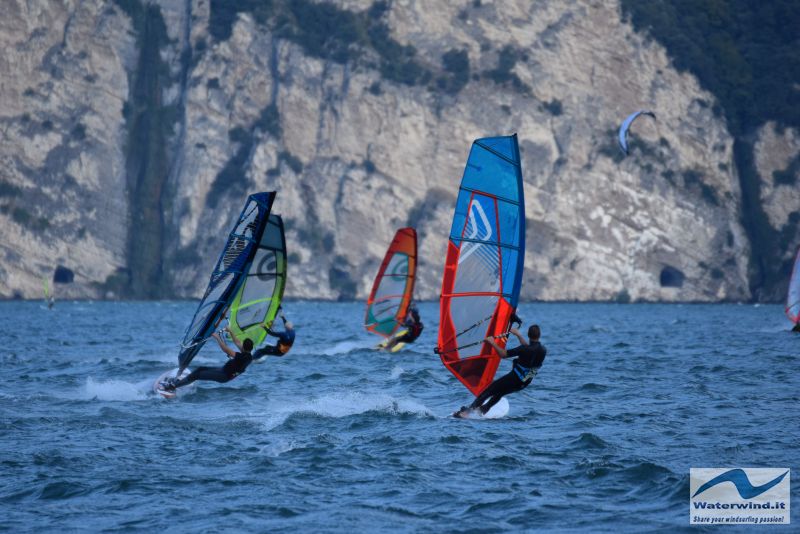 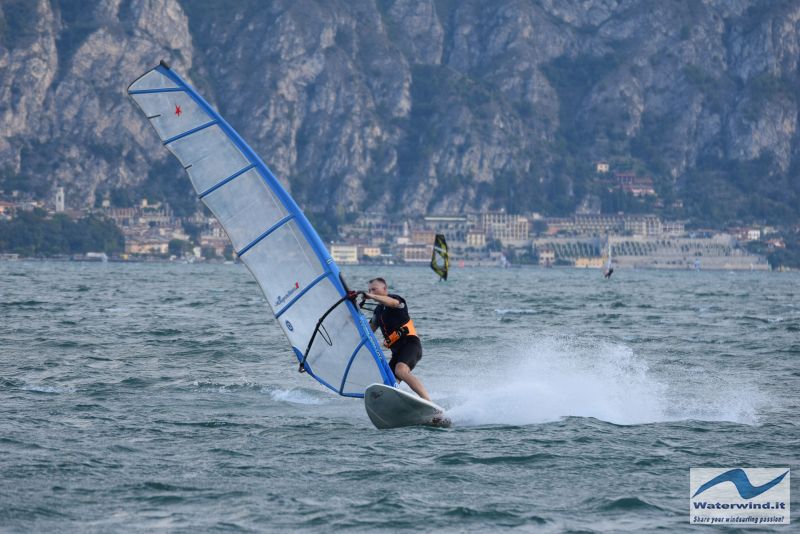 The coupled 4.7 and 106, for me, is the most didactic: small sail and relatively large board allow me to maneuver well, and understand the detailed movements well. And, in fact, I managed to land a manual Duck jibe (only one .....). Andrea (the doctor) has enjoyed the spot for a long time, and has quarreled with the ferries (and made me fight with the pilot of the ferry .... but I do not have a good relationship with the Garda ferry pilots....). 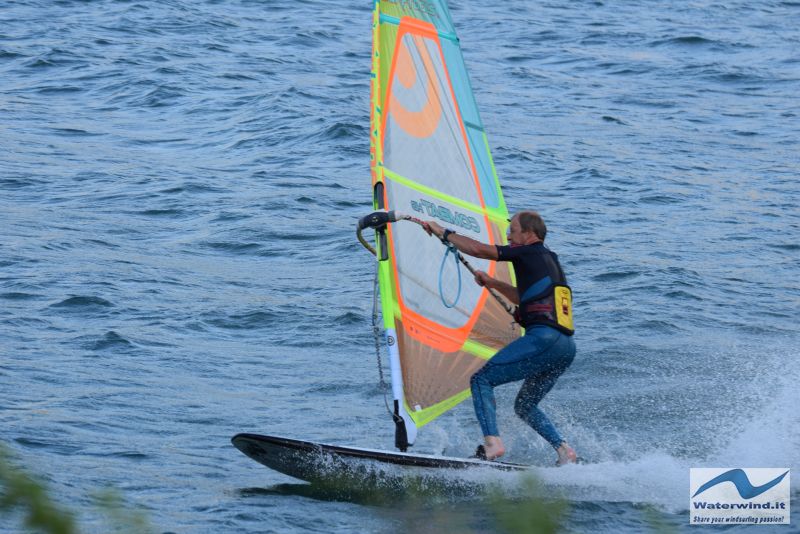 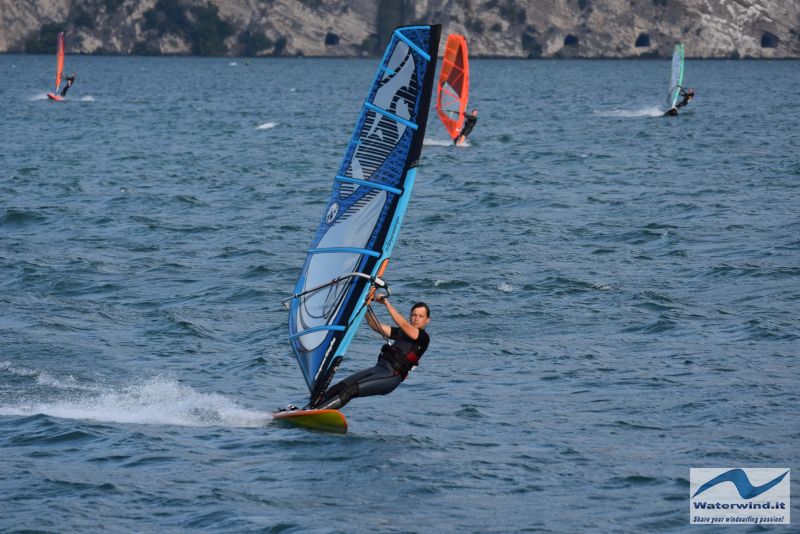 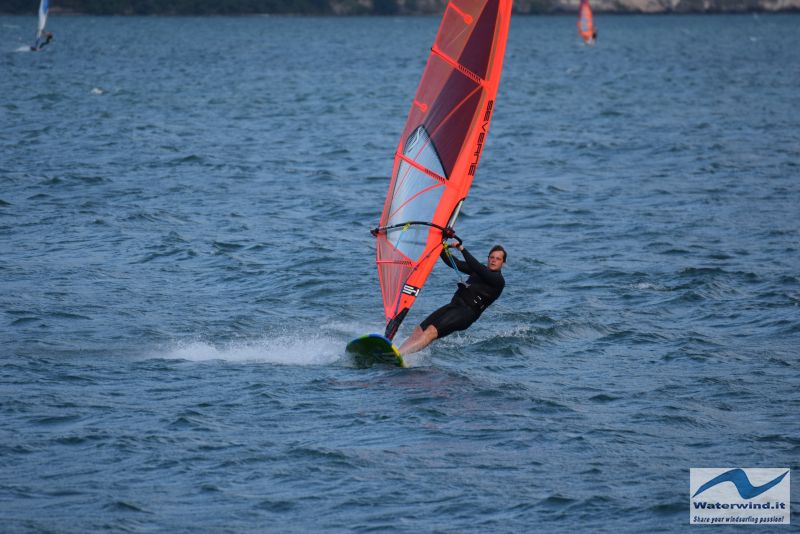 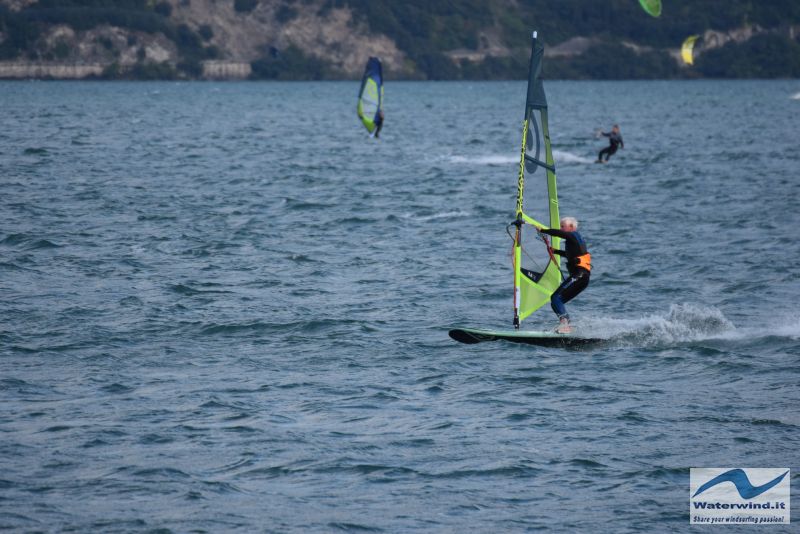 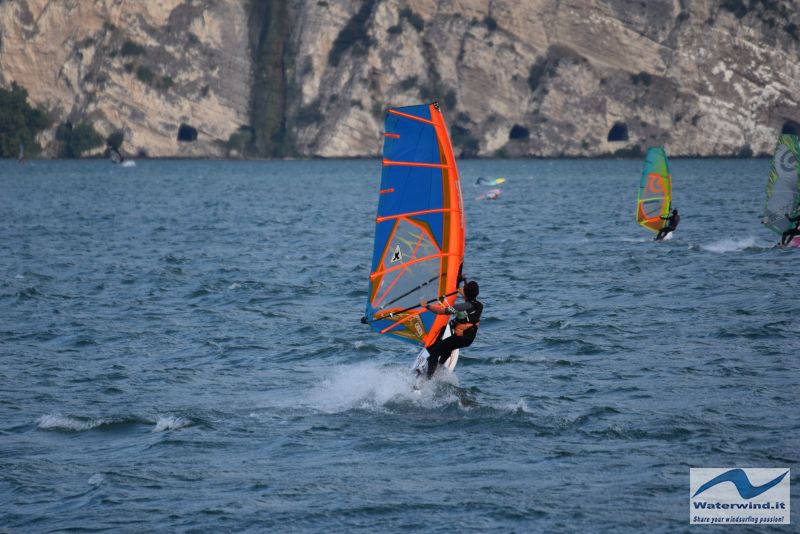 Afternoon, spent to rest in Torbole, and Busatte-Tempesta walk at the sunset (it's worth of doing it).

Then, dinner from Marione (il Caminetto) in Malcesine. 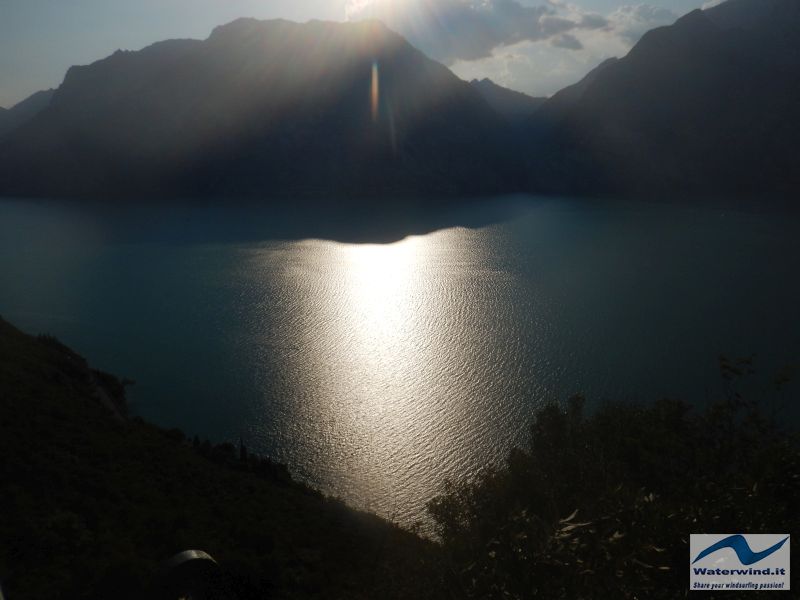 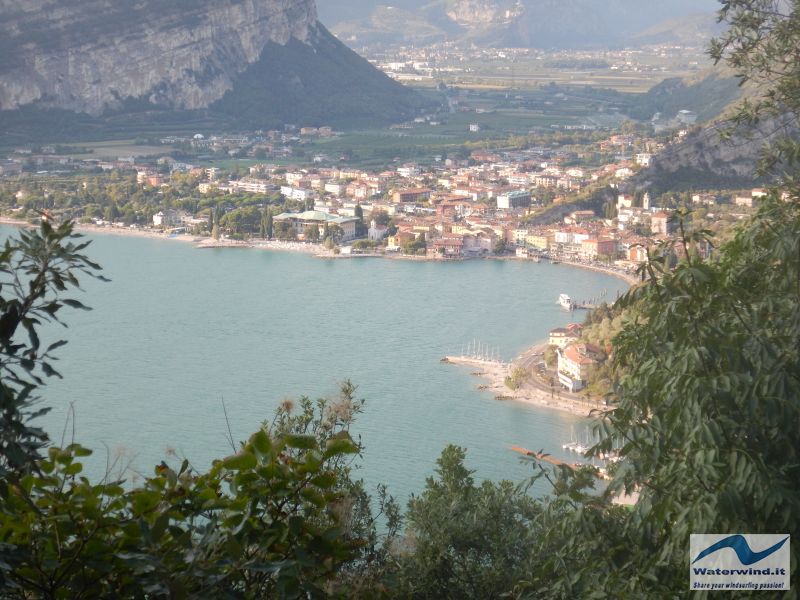 For the next day, Meteo-allerta.it had somewhat reduced the forecasts, but we made ones of our own ... and we verified that the nightly storms in the mountains at the north of the Lake could have pushed the Peler well (and, in fact, at night, I was awakened by the wind).

At 6.00 in the morning, the lake was already looking pretty rippled, with the first riders already in the water, at first daylight.

This time, we chose to ride at the Campagnola spot, to enjoy quieter conditions at the beach, and in the water. The spot turned out to be very good, even if the wind probably drops a little earlier than at the Retellino. I went out with Fanatic Quad 87 2013 (again, finally!), and Ezzy Elite 4.2 2018. Perfect match for the two hours of session, from 7.00 to 9.00 (with a little overpowering in the central part of the exit). Wind, therefore, around 30 knots. 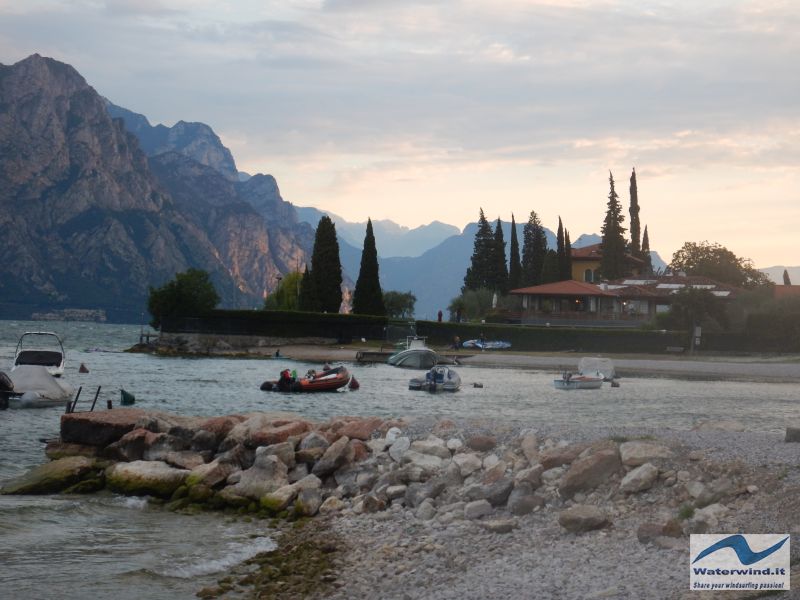 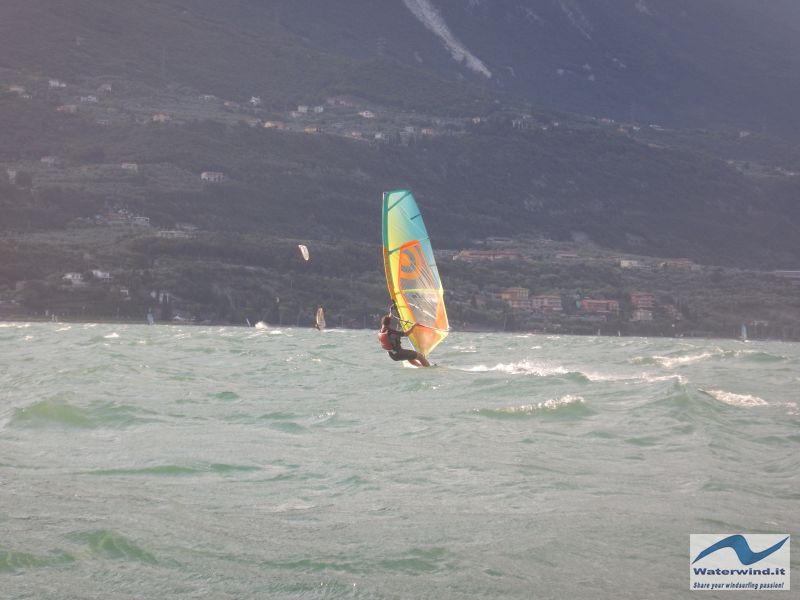 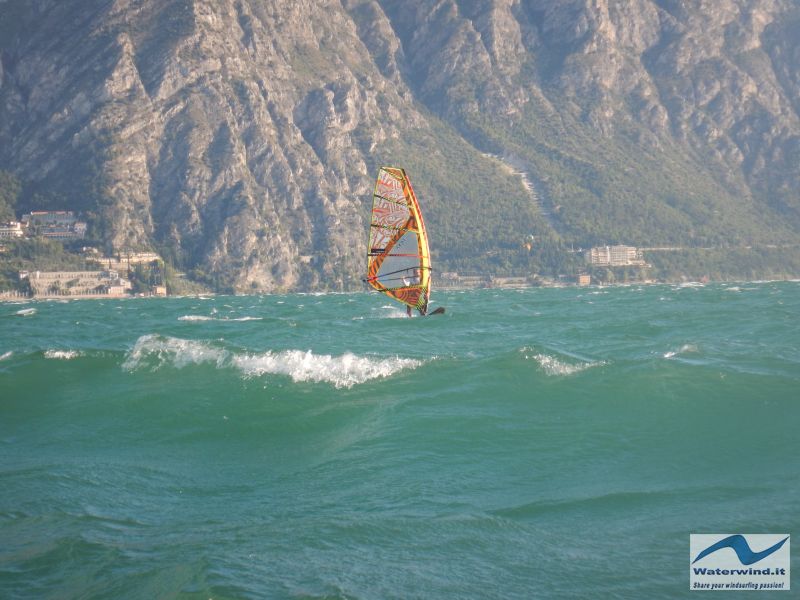 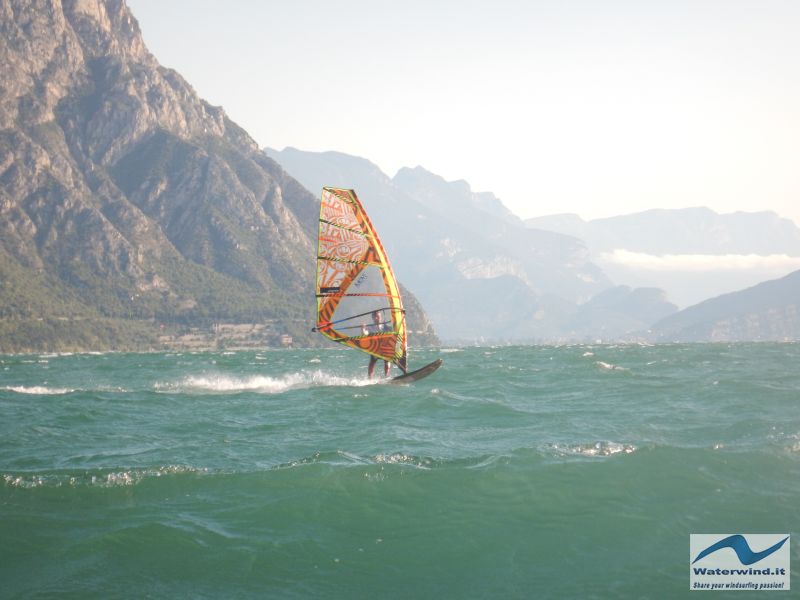 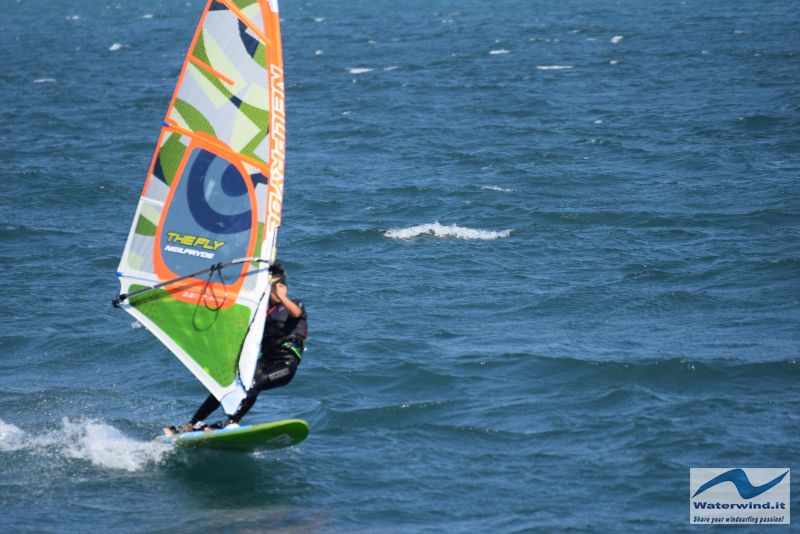 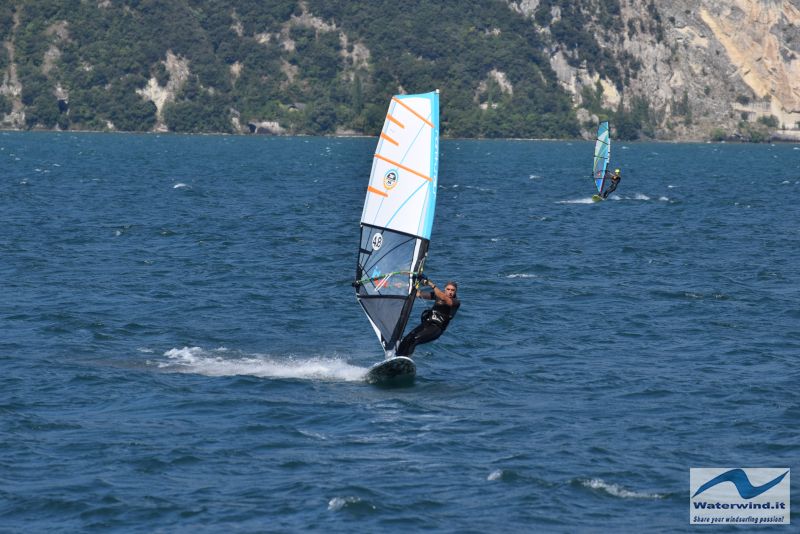 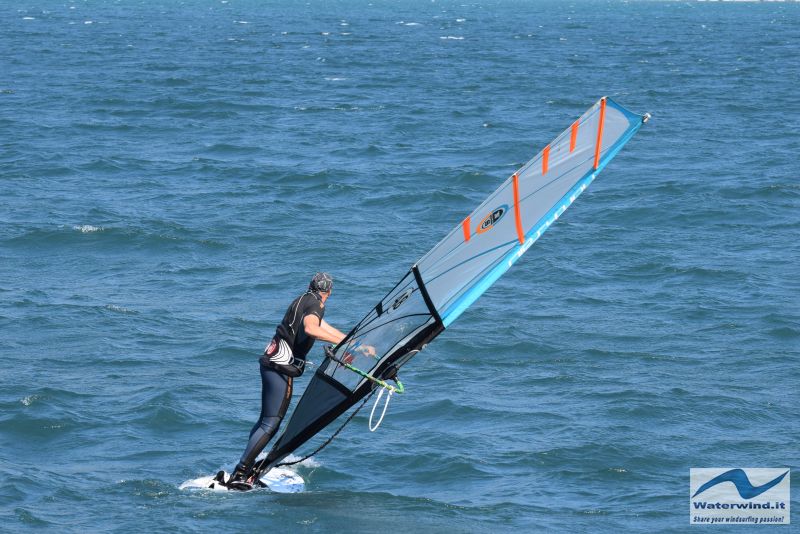 I would say it was a session of high jumps (I like very much to jump on starboard tack), as seen in the photos. Unfortunately, I still fear to try the forward loop, and, perhaps, I'll have to start with some propedeutic exercises (controlled catapult, with light wind).

In the water, it was a two hours session of hard work, and I went out at 9.00 to rest a bit, also because, at Campagnola, the wind had dropped a bit, close to the shore (while it was still good in Limone, on the opposite coast). 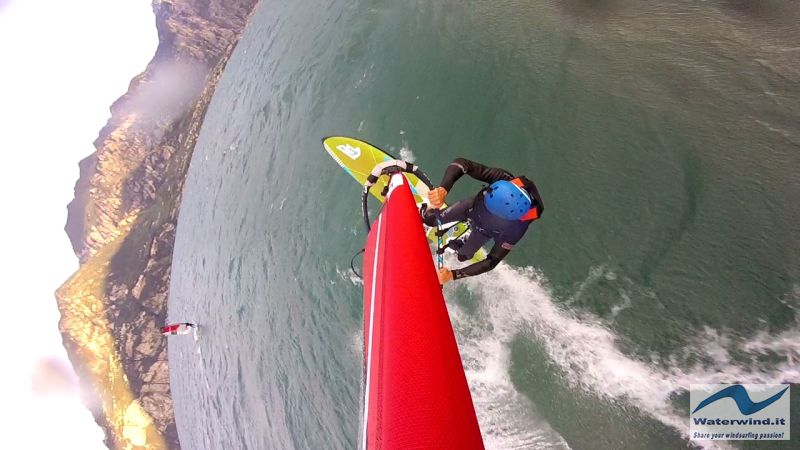 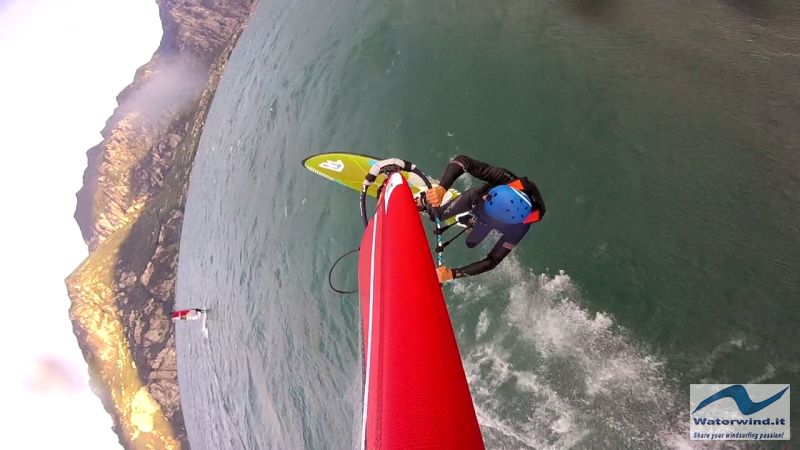 I then moved to the Retellino spot with the idea of taking some pictures of the riders that were still in the water, but, to my surprise, at the Retellino the wind was still good at 10.30, and at 11.00 I entered the water again with 4.7 and 106, still gliding for half an hour, to close at 12.00, after some exercise with Hely Tack and backwinded sailing. At Retellino, I had the pleasure to meet Matteo from Verona, a new user of the Waterwind forum, and a young freestyler. I'm glad to see young guys who are passionate about this sport, because it means that it is a sport that continues to be alive and exciting (beyond the stupid things that I sometimes hear around).

The next week still looks good for the Peler, and maybe we will do another trip there ....

Click here, for the whole slidegallery of this two days.