Saturday, La Coudoulière (Six Fours Les Plages, France) showed me that all the stories about it are true ... I went out with a knife in my teeth, with steep waves up to 3 meters and an unstable wind from W/NW, between 25 and 30 knots.

Premise: having forgotten the photographic equipment at home ...., I thank the always available Stefano Brugnola (photographer from Sanremo) for the kind concession of some photos for this article. You can enjoy Stefano's whole photo album, clicking here.

Those who follow Waterwind know how much I love the Coudoulière, both for the view and for the conditions it offers in the water. But on Saturday, a cocktail of special factors made the spot difficult, with physically and technically demanding conditions. The forecasts (Arome) gave strong, but not stormy winds, at least until 15.00, coming from West. Significant waves of almost 3 meters were also expected. I have already surfed at La Coudoulière, on other occasions, even with winds of more than 30 knots. I therefore counted on the magic of this spot, to recover from the session of Friday, the 13th, in Cannes, with West, up to 50 knots, largely unsatisfactory ... (apart from the first hour with human conditions, unmanageable wind and unpleasantly messy water ...).

Arriving at the Coudou at 9:30 am, I immediately found Marco and Roberto, already determined to rig. The first riders in the water, at times, were floating, a sign of the instability of the wind. 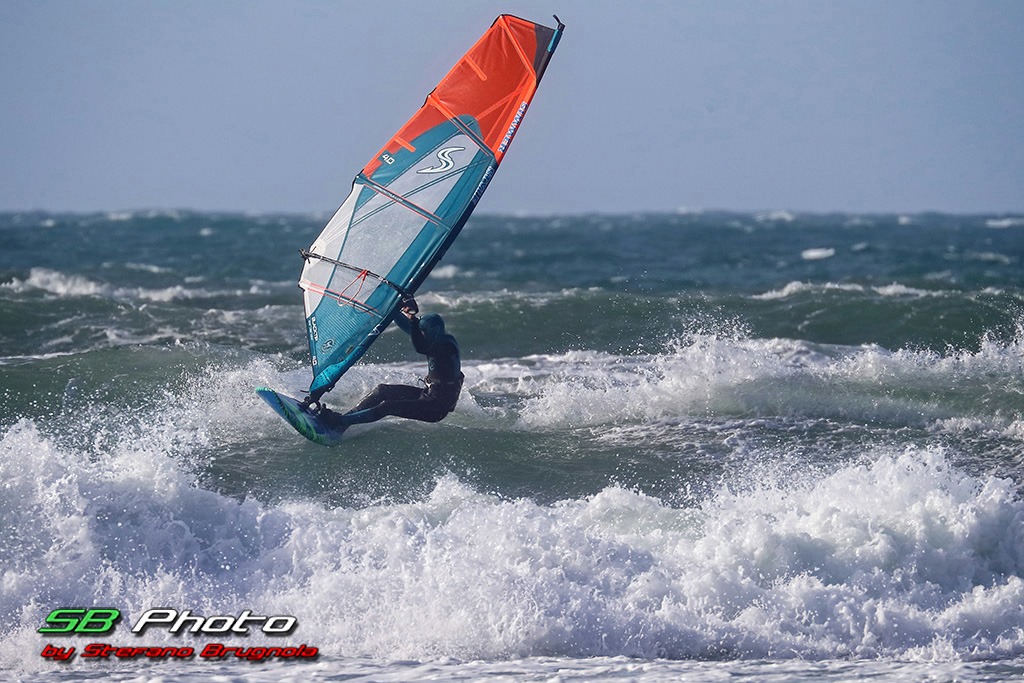 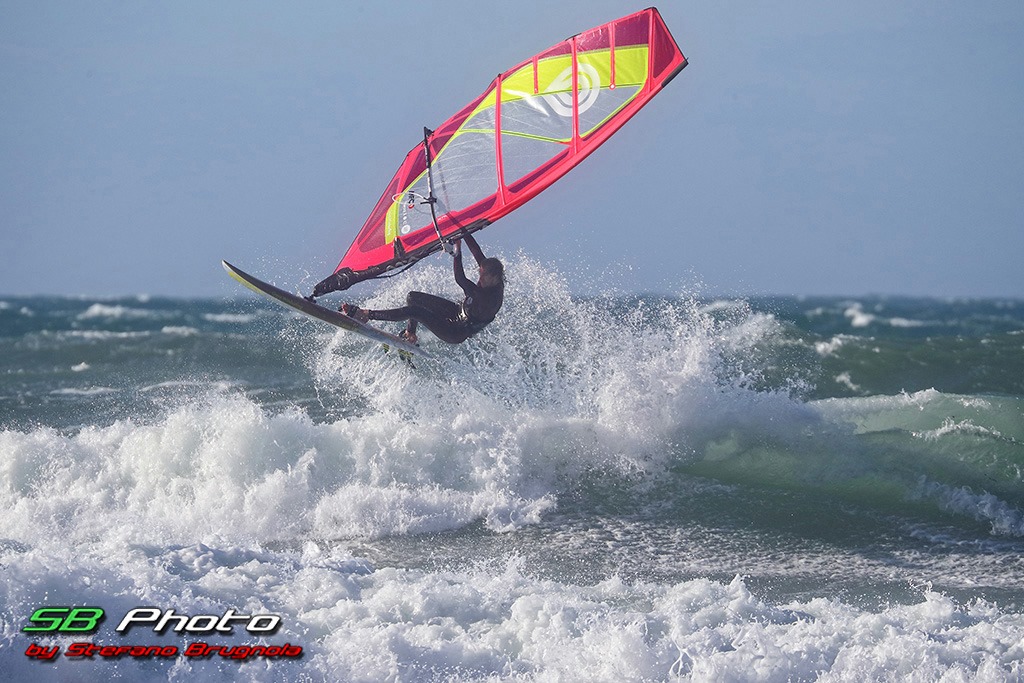 With the anemometer, I measure 15-16 average knots and 22 on the gusts. Generally, at La Coudoulière, the wind increases in the morning. I prepare, but not convinced, the Goya Guru X Pro 2020 (read the review), and the Tabou Da Curve 80 (read the review). It seems irreverent to Coudou to think of going out with the Tabou Pocket 94. But, in retrospect, I can say that it would not have been such a bad idea. I enter into the water, around at 10:15, and I immediately realize what a joke the Coudou has in store for us today. The wind, actually, comes mainly from the northwest in the early part of the morning (so with a right direction for the spot), but, as mentioned, it is very unstable and does not help to quickly and regularly get planing, to quickly get away from the port cliff. The sea, on the other hand, is very quite rough, due to the strong wind blowing, offshore, from yesterday. A bad swell from west/southwest (as also confirmed by the local rider Guillaume), with frequent and close waves, and with some massive, steep and breaking sets, almost three meters high, quite everywhere in the spot, and even in front of the infamous harbor cliff. To further complicate the situation, the southwest sea slams into Cape Negre, enters the bay and creates a fairly strong current directed from north to south, in front of the beach and the cliff, which produces two negative effects. First, when going out, having almost the same direction as the wind, it further reduces the wind apparently affecting the sail, with the result that, when the wind is light, you float. Secondly, if you fall in front of the beach from where you are leaving, you will soon be brought to the cliff of the port ....

However, I manage to go out, even if there are some equipment trimming that do not convince me (for example the position of the mast foot). Therefore, after a few rides, I decide to return to the beach to adjust the parameters. 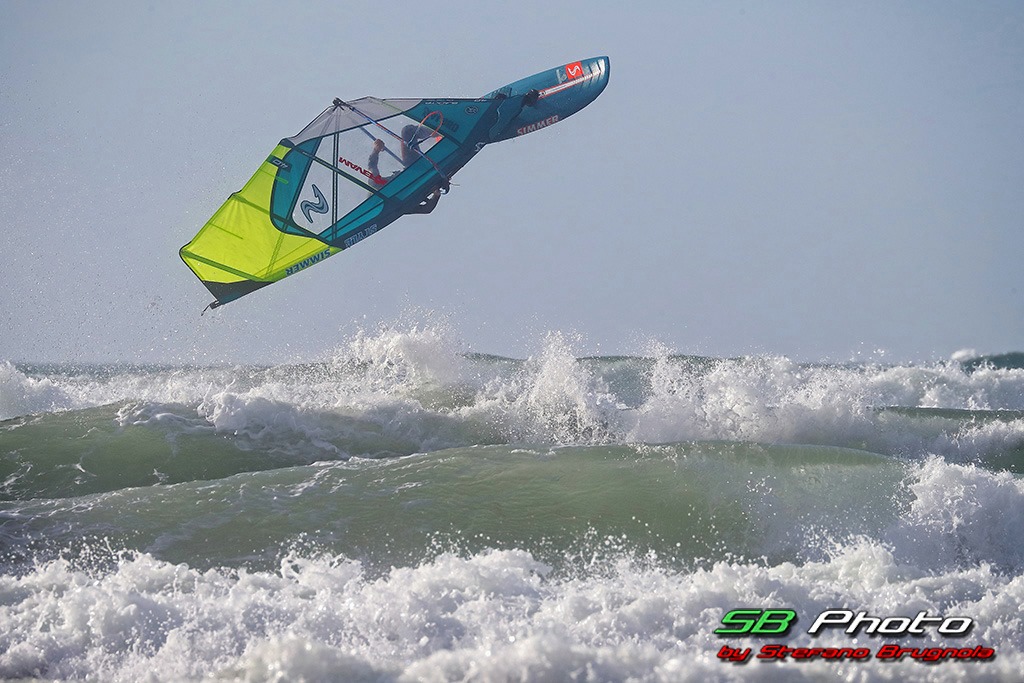 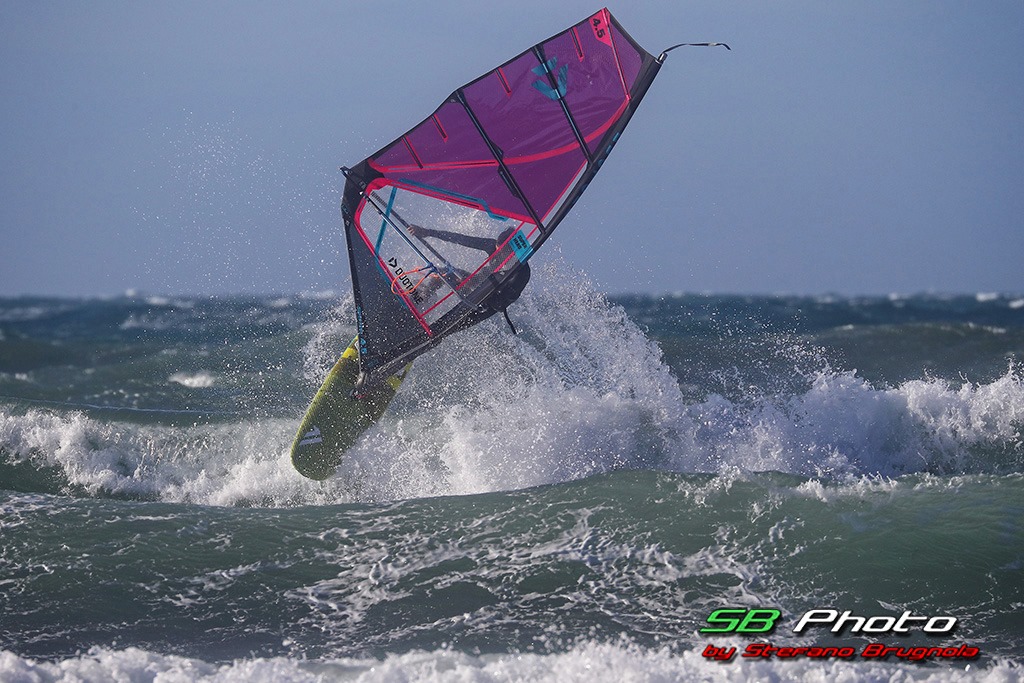 Coming back, too, if you're not offshore, is not easy: sometimes the gusts of wind come precisely from the same direction you have to keep to go back to the beach, and there are huge waves pushing towards the cliff. Anyway, I come back to the beach, I trim the equipment better and go back to the water. I meet Marco, who, with the Banzai 4.7 and the Quatro Super mini, sails quite well anyway, both for his abilities, and perhaps also because, on this occasion, the remarkable power of the Goya Banzai can be useful. When going out, he overcomes some big waves of a major set, while I stop in a drop of wind and a nice high wave breaks on my head. I hold the equipment tight and remedy a fabulous wipe out ...

But when I reappear, I realize that I am just in front of the cliff of the port, more or less at half its length. A water start on port tack, towards the beach, is no longer possible; I would have wind and current against me. I'm afraid that another wave will hit me against the cliff. As I clumsily think of climbing quickly on the rocks, I observe where the current pushes me, and notice that the rebound waves keeps me a few meters from the rocks, and I remember what many said. I understand that the only way out is a water start on starboard tack, in favor of the current. I manage to leave, and escape the danger without any harm ... Fortunately, I have not broken the equipment, which I need for South Africa in January ... I return and rest.

I talk to Marco about what happened. I decide to make the sail more powerful and to fix boom end to the upper clew. But it's not right again... On the gusts, I'm too big, but there are still dangerous wind falls ... I come back to decide if to change sail. Meanwhile, Stefano Brugnola arrives, with Andrea Franchini and Adele Frola (just come back from Australia), Corrado Avagnina and Alessandro Derox Mazzetti (riders from Liguria).

Meanwhile, in the water, I see the best riders (Loick Lesauvage, Adrien Bosson) surfing the big waves that break even off the coast, as well as some facts that I had never seen before, but only heard. Many other riders find themselves dangerously in front of the cliff. A boy breaks the mast (I don't know how), but manages to return to the ground, without any other damage. 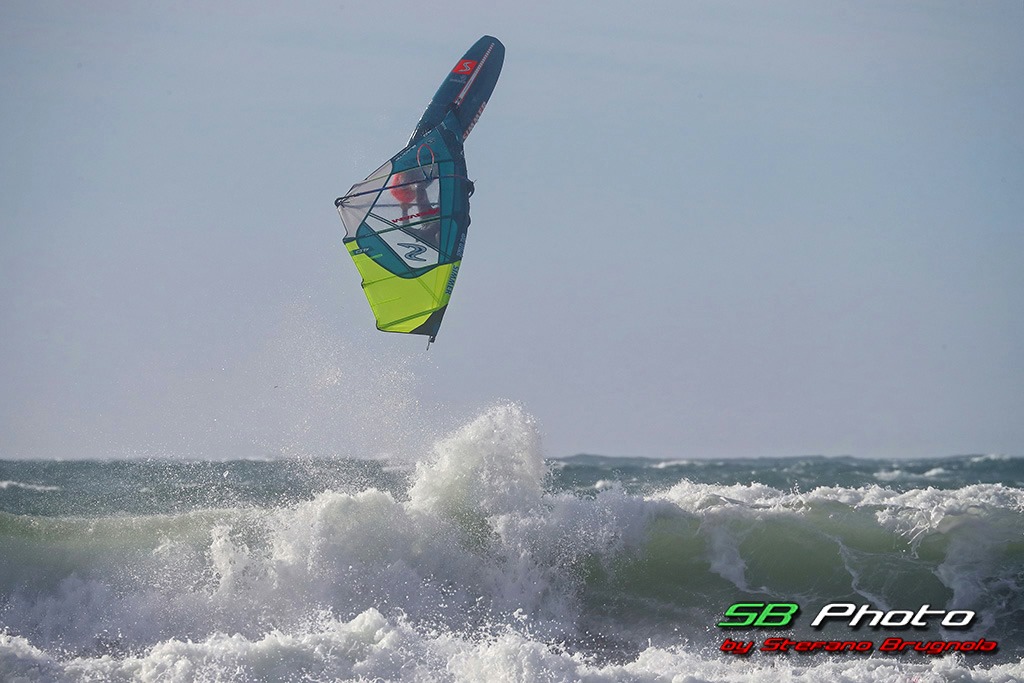 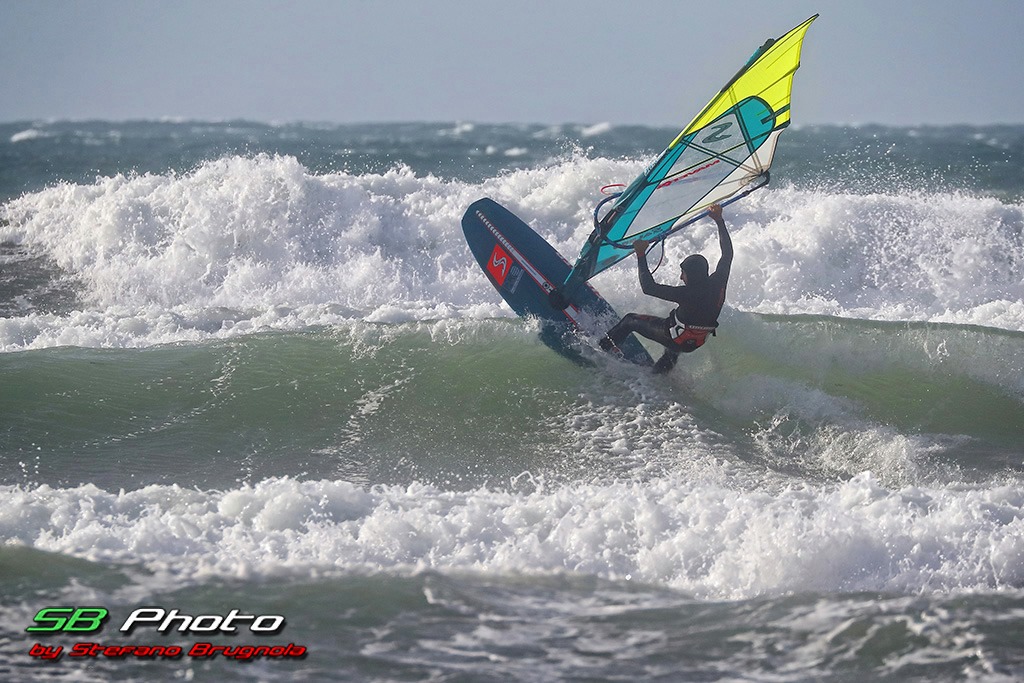 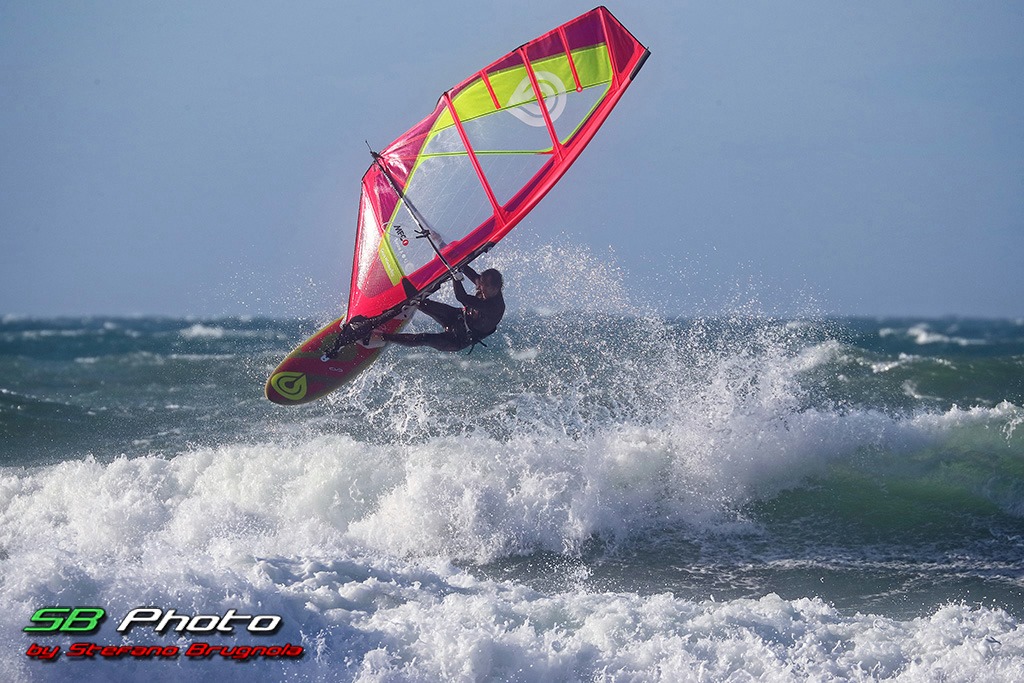 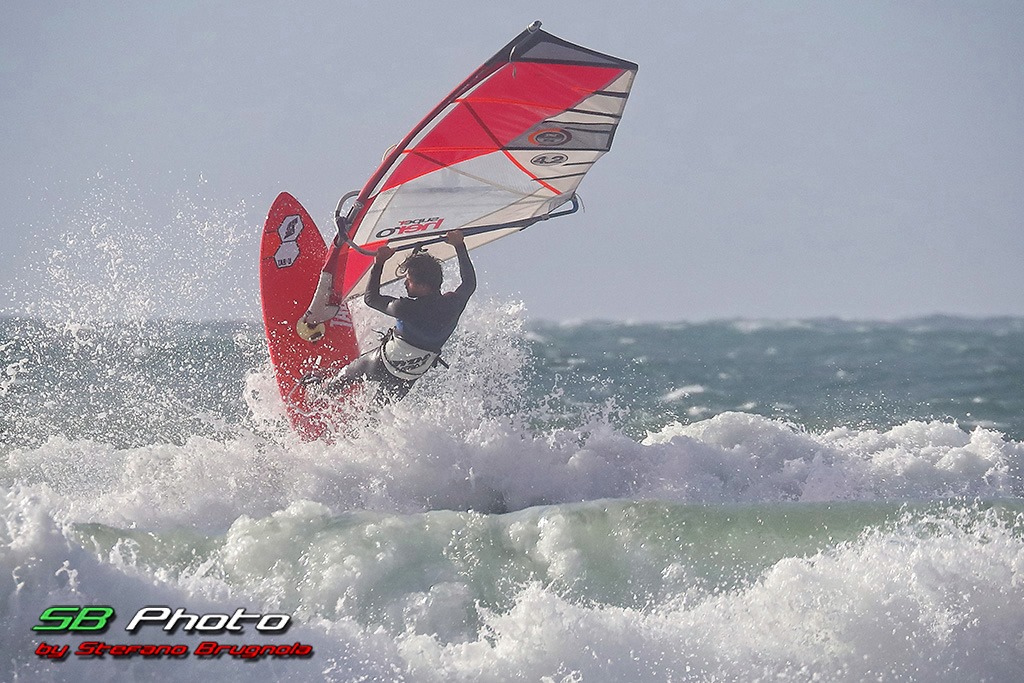 I chat a little, on the shore, and meanwhile I try to decide what to do. It seems that, as expected, the wind is picking up a bit. I go to the port to measure its speed with the anemometer, but in reality only on gusts the wind reaches 27-28 knots. While I'm on the cliff, suddenly, a boy comes out of the water, climbing on the rocks with just the board ... He lost the rig in the water. I look at the sea, but I see nothing. It could be sunk. He has an inconsolable face. On the other hand, I see the local Anthony Ruenes (F85), which leaves the beach much downwind, he immediately begins to slide, and passes very close to the cliff of the port, as if it did not exist. Maybe he has a propeller under the board ......

I'm going back to the beach. Andrea Franchini, whom I finally got to know in person, goes from 4.0 to 4.5. I still wait a bit.

Around 13:30, the wind finally comes in stronger and more steady. I rig the Ezzy Elite 4.2 and return to the water. I don't want to let this morning's adventure become the last memory to associate with today's Coudoulière. When I come back into the water, finally, I feel more secure. The 4.2 is the right size and grows well. The rest is done by the quality of Ezzy: the sail remains neutral and soft when riding and does not tire me. I remain still forty minutes in the water. Now, I can go upwind, and offshore. At a certain point, I managed to catch a colossal wave, a mountain, and I start to surf as if I was surfing the waves in Oman. I take advantage of its descent to go upwind, and when it gets steep, I start with the bottom. But here we are not in Oman ... the wave is steeper and faster to break. I am wrong about the timing, I am too early, and when I do the cut back, the wave breaks upon me. Another wipe out that brings me back to the cliff. But this time, I'm closer to the starting beach. I make the water start and return to the beach. 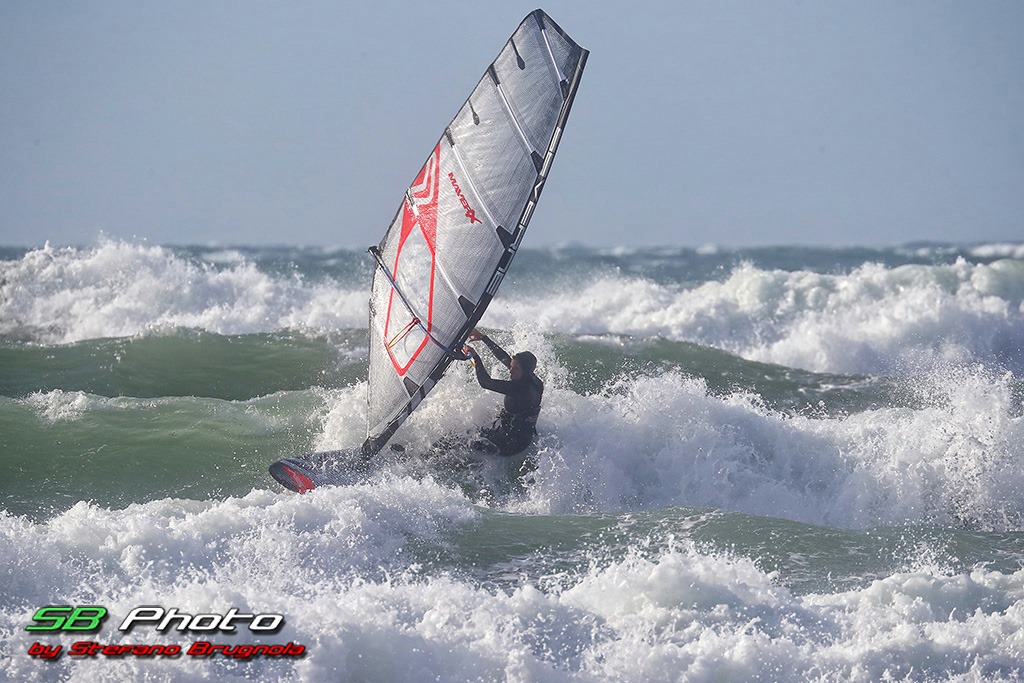 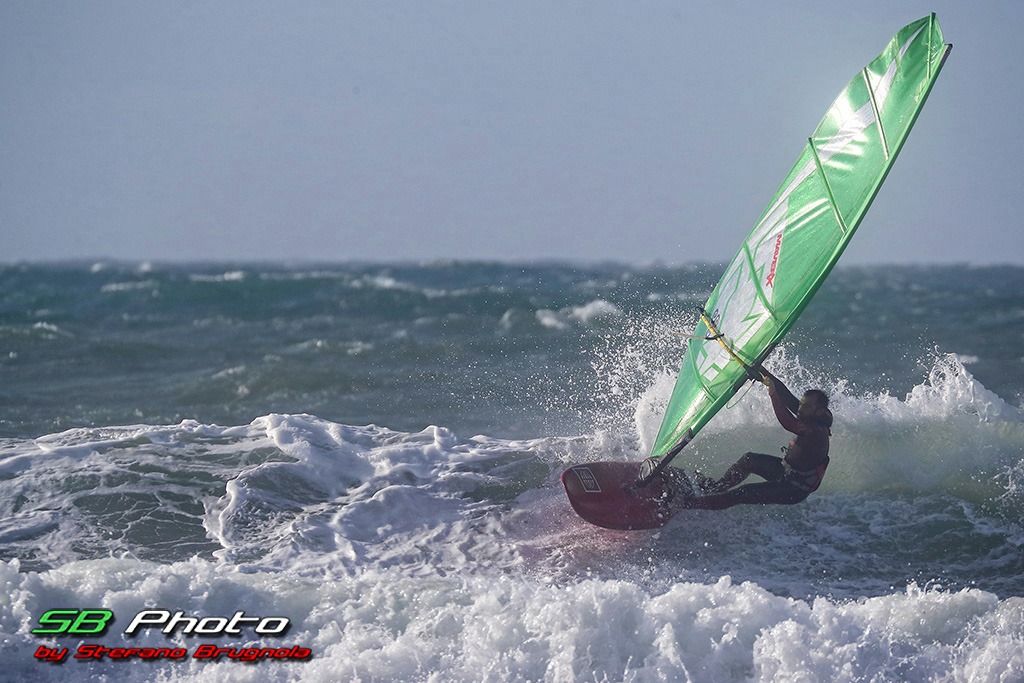 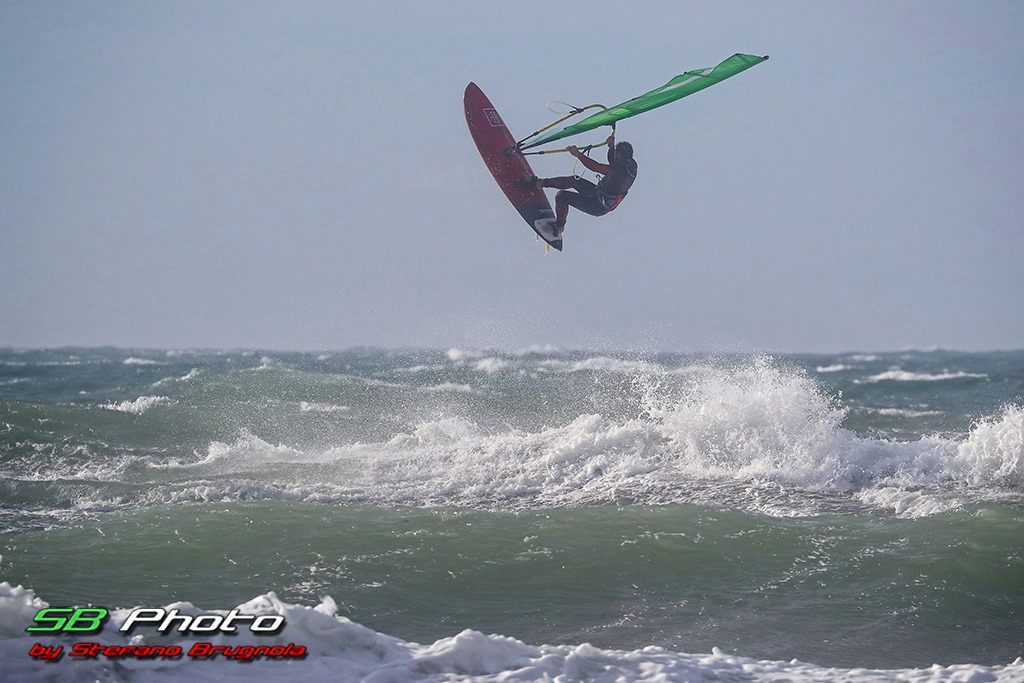 On the beach, I start to chat with Adele and Corrado, to whom I ask questions about Australia and Mauritius, respectively.

Around 15:30 the wind begins to fall again. I decide that it is enough and that it is not necessary to take other risks. I unrig the sail and the board quietly, in the parking lot where the temperature is almost always pleasant (Saturday, sun, and 17 degrees). Before leaving, Andrea Franchini suggests to go and get something to eat at the bakery near the port. French bakeries are always worth the trip. Then we take our leave, and everyone leaves for their respective routes. The meeting with the Franchini group was certainly an added value of the day.

I leave the Coudoulière, after getting to know it better, and having understood the lesson that, with big waves and an unstable wind, the place deserves attention and respect.