There are no more words for this autumn season of Peler at Lake Garda... Yesterday, November 10, 2019, any previous season record has beaten, with a Peler which, at the Prà de la Fam, as in Malcesine, has far exceeded 30 knots, and touched 40 kts, on some gusts. And the lake gave us another memorable day of windsurfing.

The average size of the right sail for my last sessions (Cannes, Andora, Imperia) is probably around 3.5 square meters ..... I think I have to start to make a bad wind forecast, or look for a a little less nuclear wind ...

The snow on the mountains around the lake (spectacular view over Monte Baldo), and the water temperature of the lake still around 15 ° C have created the conditions for a crazy Peler, as I had never seen on Lake Garda: the strongest Peler I have experienced, able to withstand the Balì storms in Toscolano, or Desenzano.

For the occasion, we left Milan in three, me, Adriano and Andrea, at 6.00 in the morning. The cool night led me to give up my usual sleep in the car at the Pra (but I do not know what is worse: to sleep with a good sleeping bag in the car, or wake up at 5.00 in the morning). Already arrived in Salò, around 7.00, I noticed some particular signs: the lake, in the center, already in front of Salò, appeared dark and significantly rippled .... Usually the Peler does not blow so strong in the South. 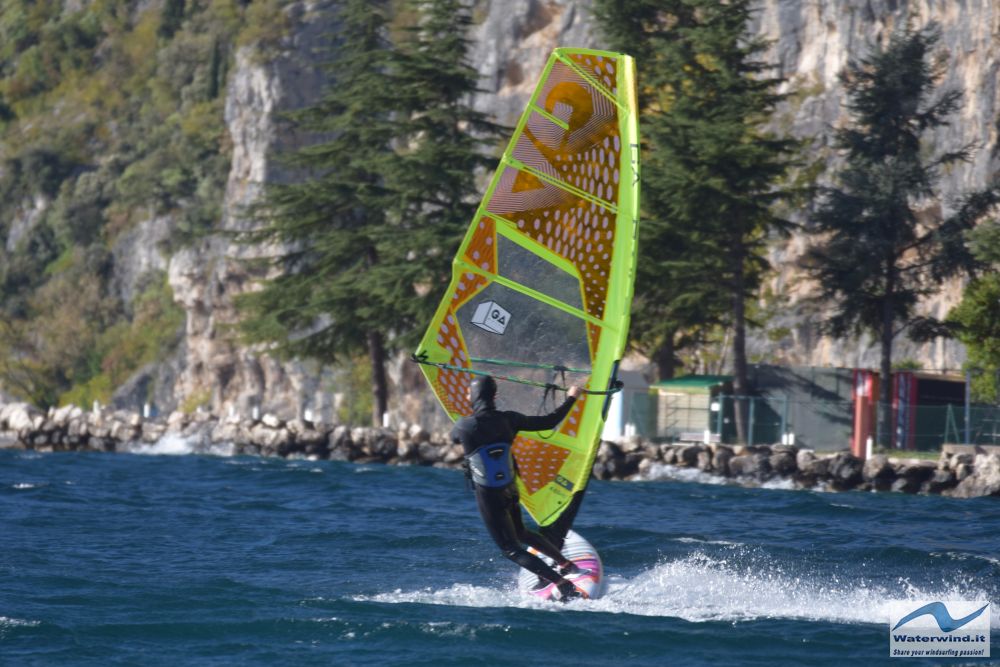 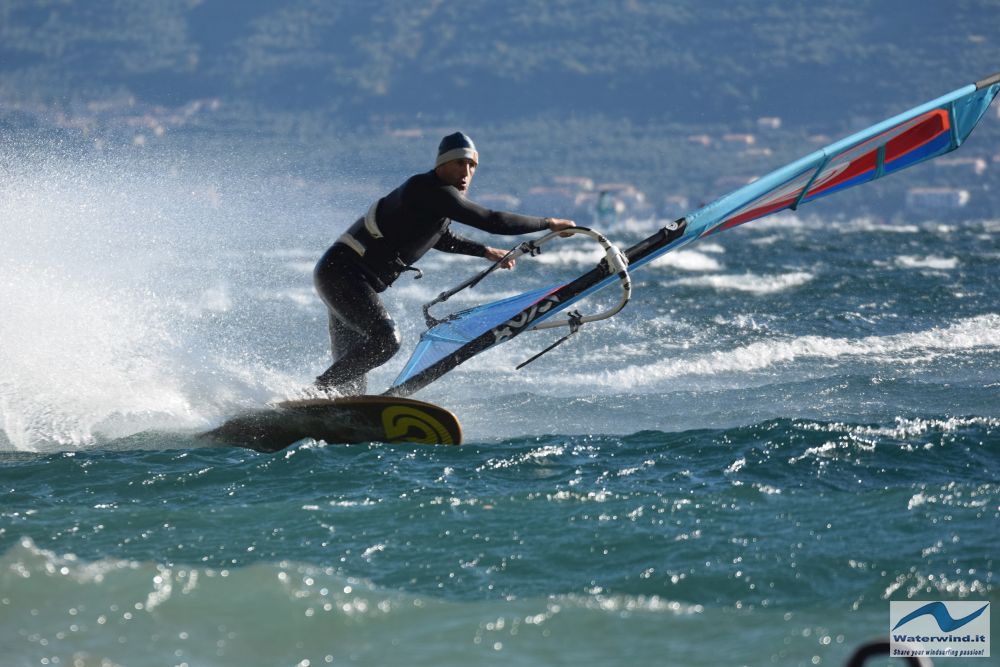 Proceeding by car along the western Gardesana, we realized that the wind swept the surface of the lake more and more, from coast to coast. We thought for a moment to stop in Toscolano (and, in retrospect, I can say that maybe it would have been better ....). We arrived at the Prà at 7.30 am, and here we caught many of the riders fond of this spot (for many - me for sure, the Prà is also a soul place, not only a windsurfing spot).  Also Pro riders Mattia Fabrizi, and Julia Pakosz - POL 1819 were present at the spot. Almost cold temperature (8 degrees), at least until the sun came out from Monte Baldo (shortly after 8.30 am).

Even once we arrived at the Prà car park, the indications that Peler would have been very strong were confirmed. And I soon realized that we had made a huge mistake. To fit, all three of us, in the car, we have limited the equipment we charged in the car: a board for each of us, and a few sails. In a few words: I had only Tabou Pocket 94 2016 with me, and the Ezzy Elite 4.2 2017, as my smaller sail. The Tabou Pocket must be a lucky board, because every time I use it, the wind asks for a 3.7 sail! Unfortunately, however, I can never try it in its ideal conditions, and I have not yet a precise idea of ​​its performance.

At about 9.00 am, we entered into the water, with the smallest sails we had (my 4.2, sheeted for strong wind). 6/5/4 wetsuit with integrated hood for me, and, for the first time, in this fall, I also put on the surfshoes. Hands, instead, naked. Actually, the water hasn't turned out to be cold yet, and I haven't had any problems with my hands (let alone my body).

The wind, as we expected, was immediately strong. I managed to close some moves at first, but then I started to get annoyed .... In jibe, it was difficult to control the speed. I made a lot of mistakes because I often ended up dropping the next wave, ahead of me, because of too much speed... A bit messy and choppy conditions, also for the riders traffic in the water, which, however, allowed me to place some nice jumps, also because the sail in the air, sustained for a long time.

After 40 minutes I returned to the beach, with the excuse of taking some photos. I noticed almost only open sails, some 3.3 for the lightest ...., and also the Pros who were strongly committed to manage the most powerful gusts. On the ground, we started thinking about having to wait for the late morning to have adequate wind conditions for our equipment.

In fact, when I returned to the water at 10.00, the wind was still rising, and with a certain amazement, I realized that, at the center of the lake, the water surface was spraying! Never seen a thermal wind of this power (perhaps only the Cape Doctor, in South Africa, in the afternoon). After a while, I returned to the ground again, and I took the opportunity to let Andrea try my Ezzy. For me, no use wasting energy. I still took pictures and videos.

I was right to wait, because the best part of my session was that the late morning one, from 11.00 to 12.30. In fact, when I returned to the water, for the third time, at 11.00, the wind was a little less strong, and sometimes a little unstable; but basically I glided almost non-stop with 4.2.

In the water, we stayed in a dozen. Most of them had been worn out by the wind storm at the beginning of the morning. The water level was also more pleasant, more regular, both for the lower wind intensity and for the lower traffic in the water. With Andrea, we stayed a long time in front of the Port of Tignale to sail together. Finally, I started to maneuver more decently.

Shortly before 12.30, noticing a slight further wind drop, I decided to sail to the harbor slide, and to go back in, comfortably. The wind has actually been still pretty tense for a long time, and it would have allowed us to stay in the water with a 4.7, almost until 14.00, when we left from the spot.

As done by a guy from Munich, who I exchanged a few words with, it would have been nice to open a deckchair and rest, enjoying the warmth of the sun that the Pra always gives after each session (about 15 degrees at mid-day).

Instead, we had to return to Milan, where we arrived around 15.00. Here, with a certain astonishment, we discovered that Andrea, after 3.5 hours in the water, in the afternoon, would have gone to play a tennis tournament! Ironman! While most of you licked your wounds due to the demanding exit,

We, with eyes saturated of the beautiful images of the day, have returned to our family commitments.

Below, a selection of photos taken on the spot. Click here, for the entire slidegallery of the session. 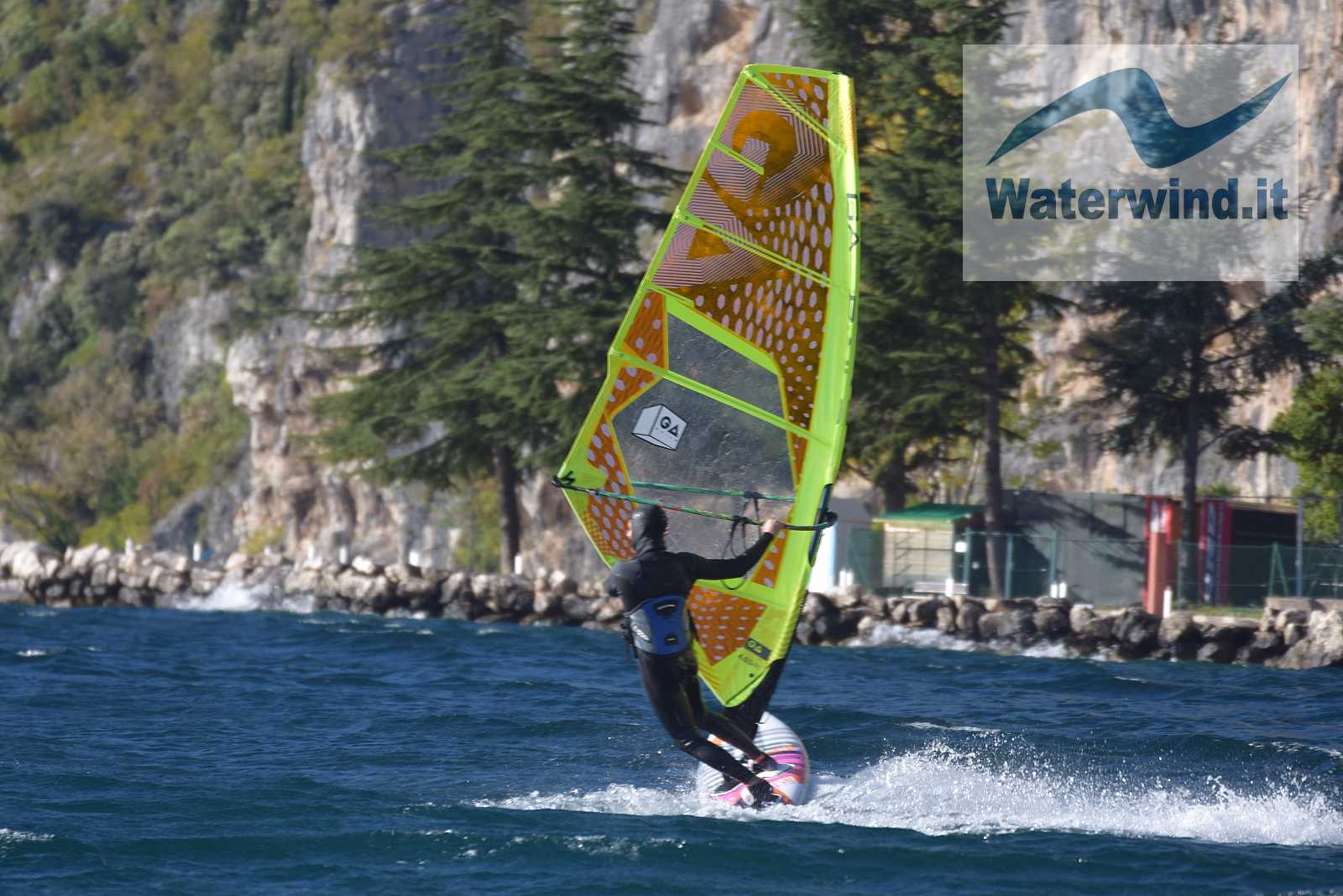 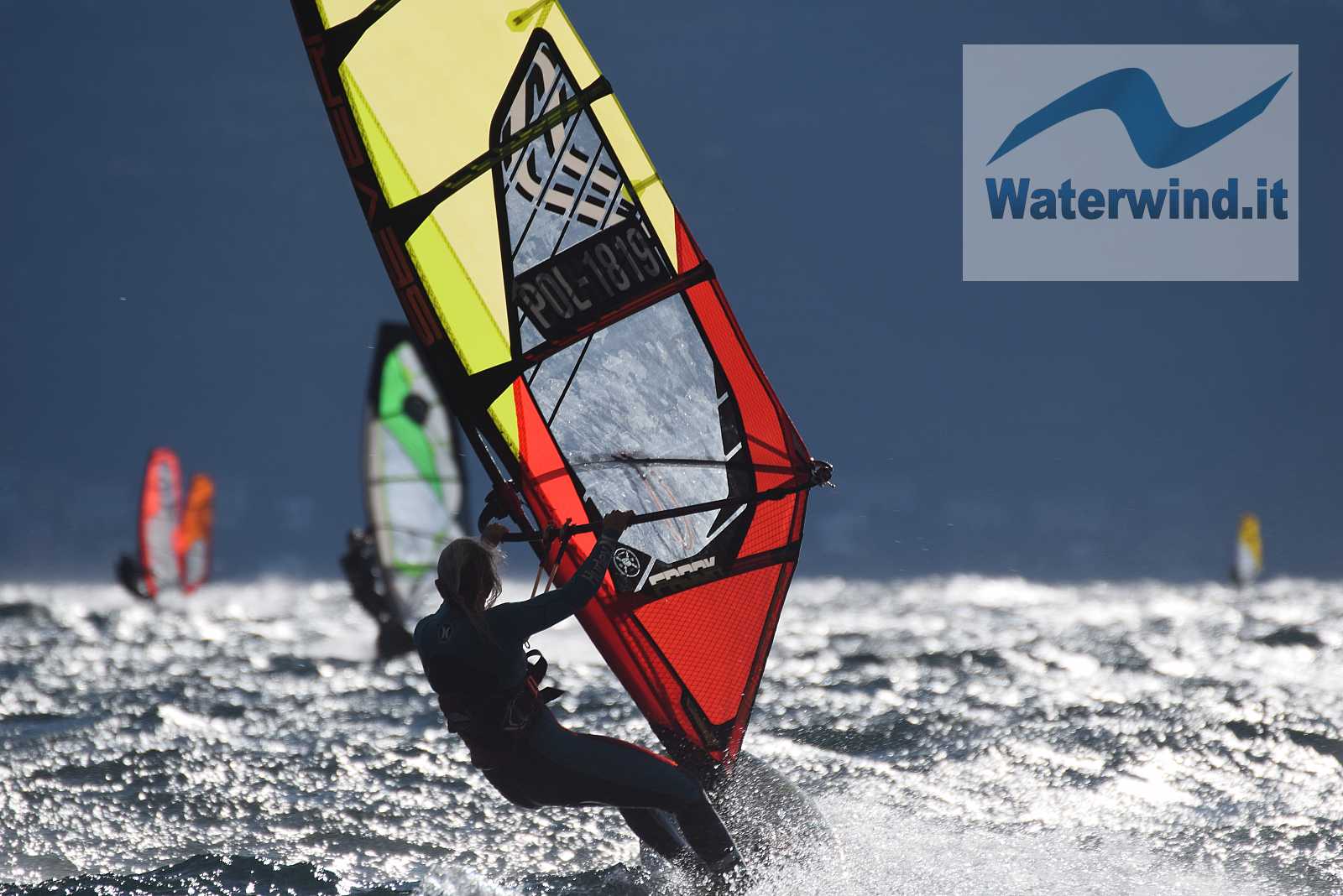 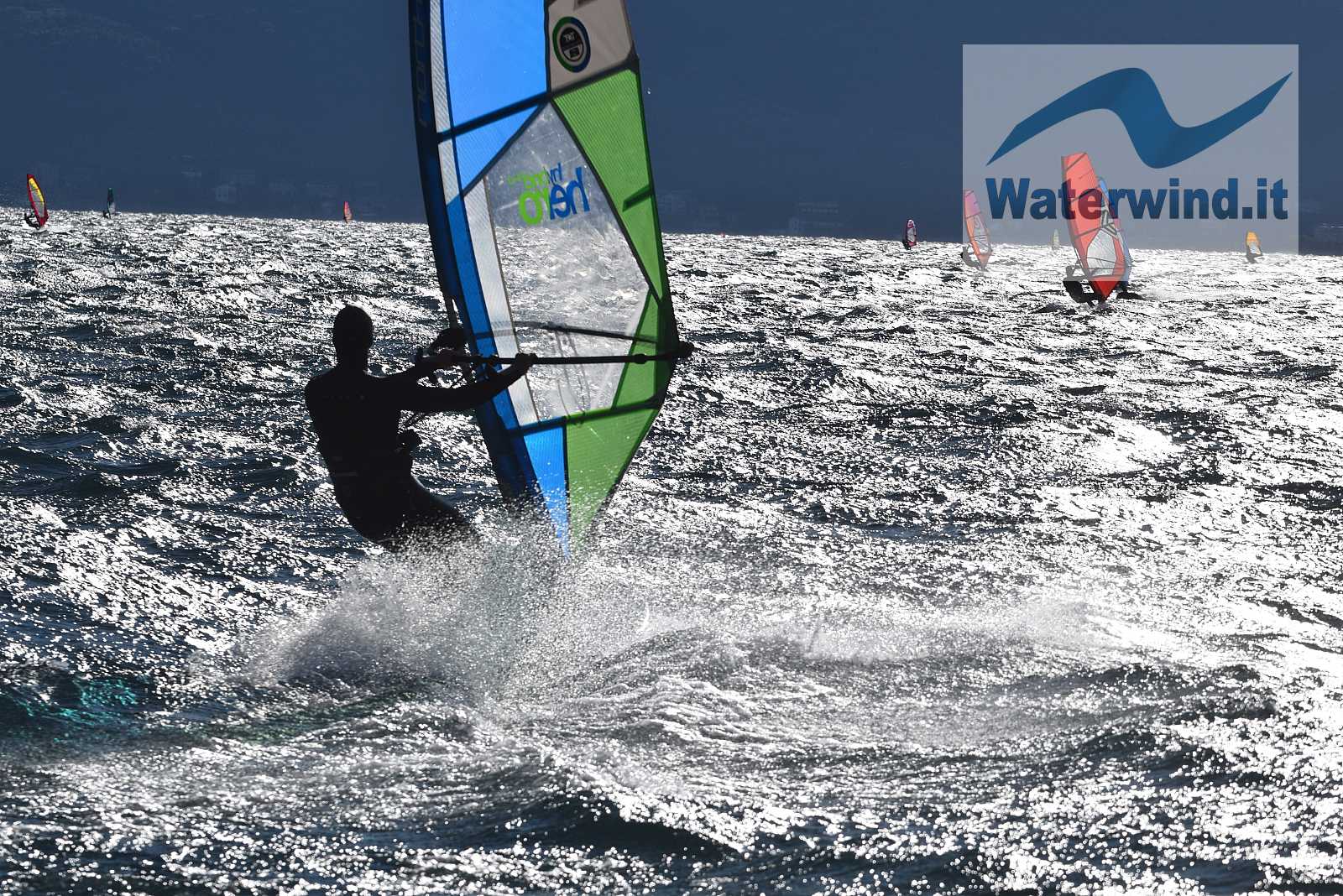 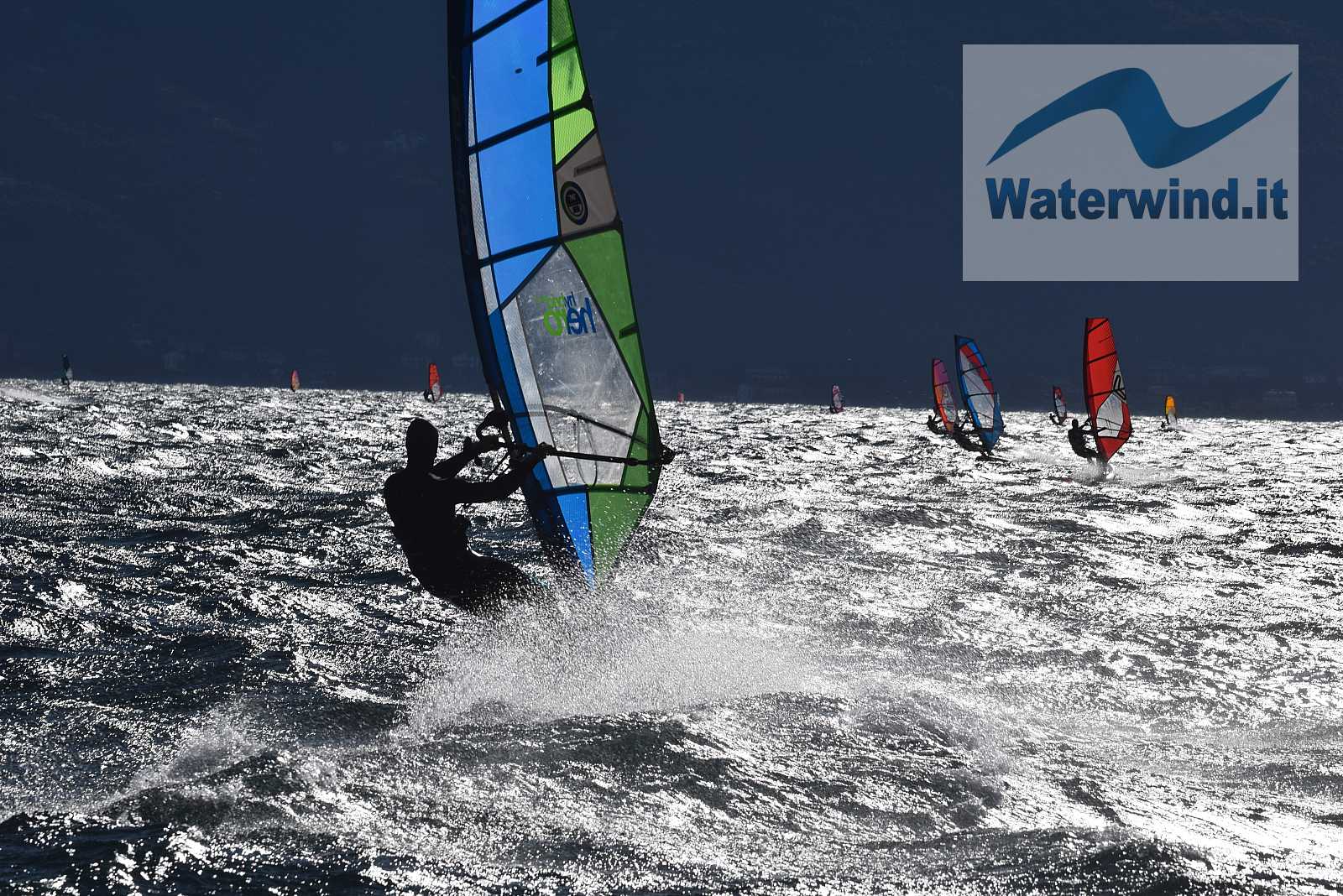 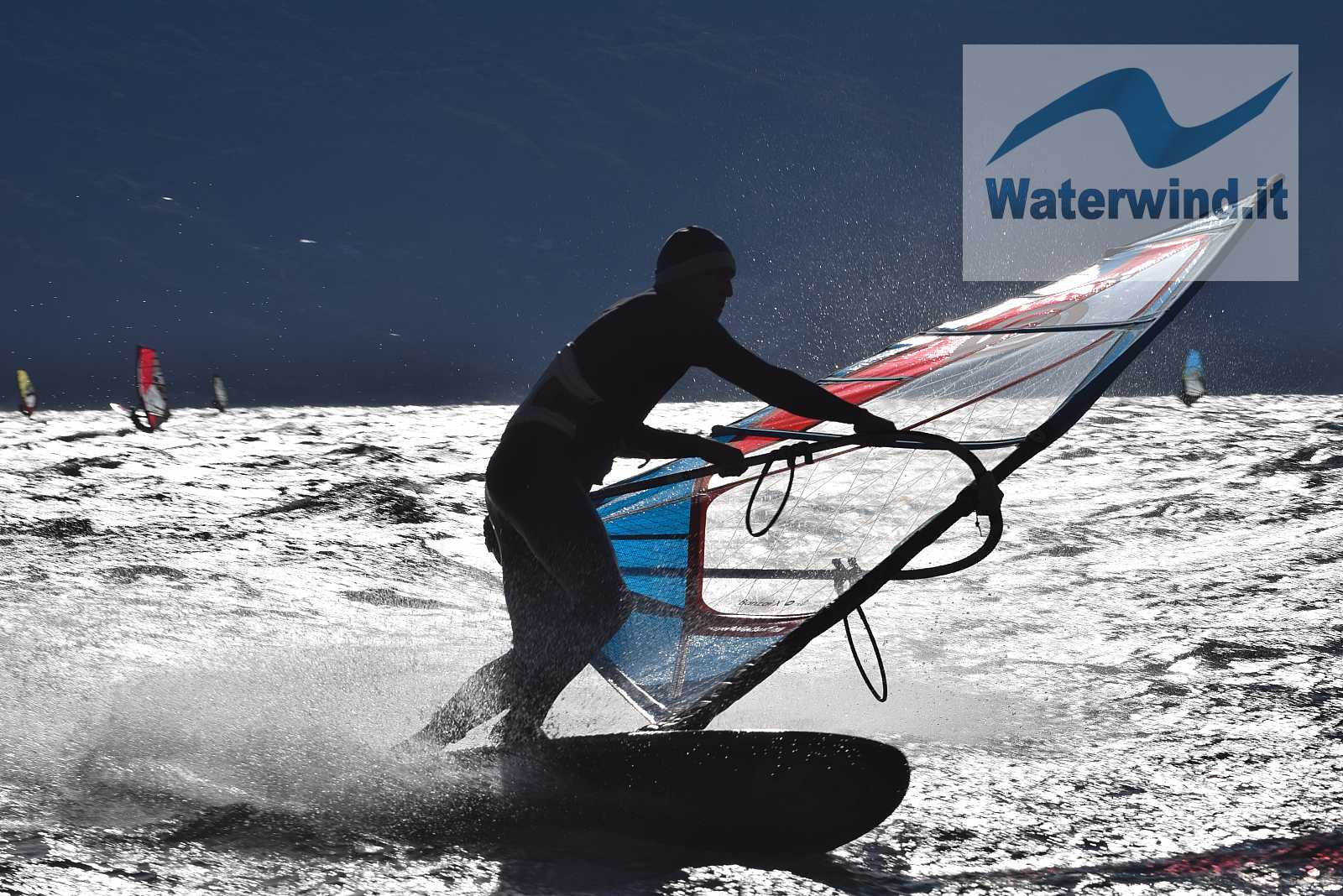 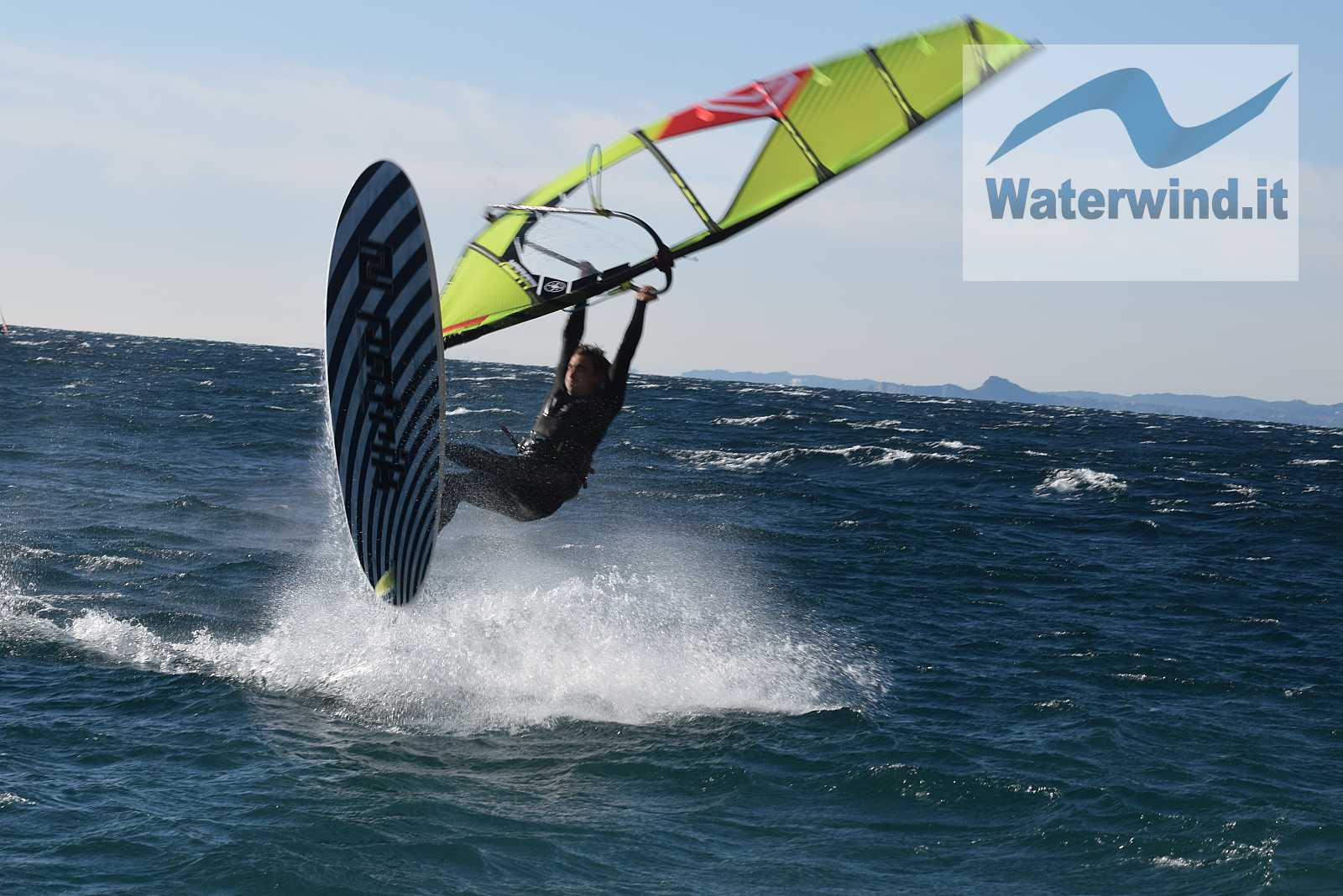 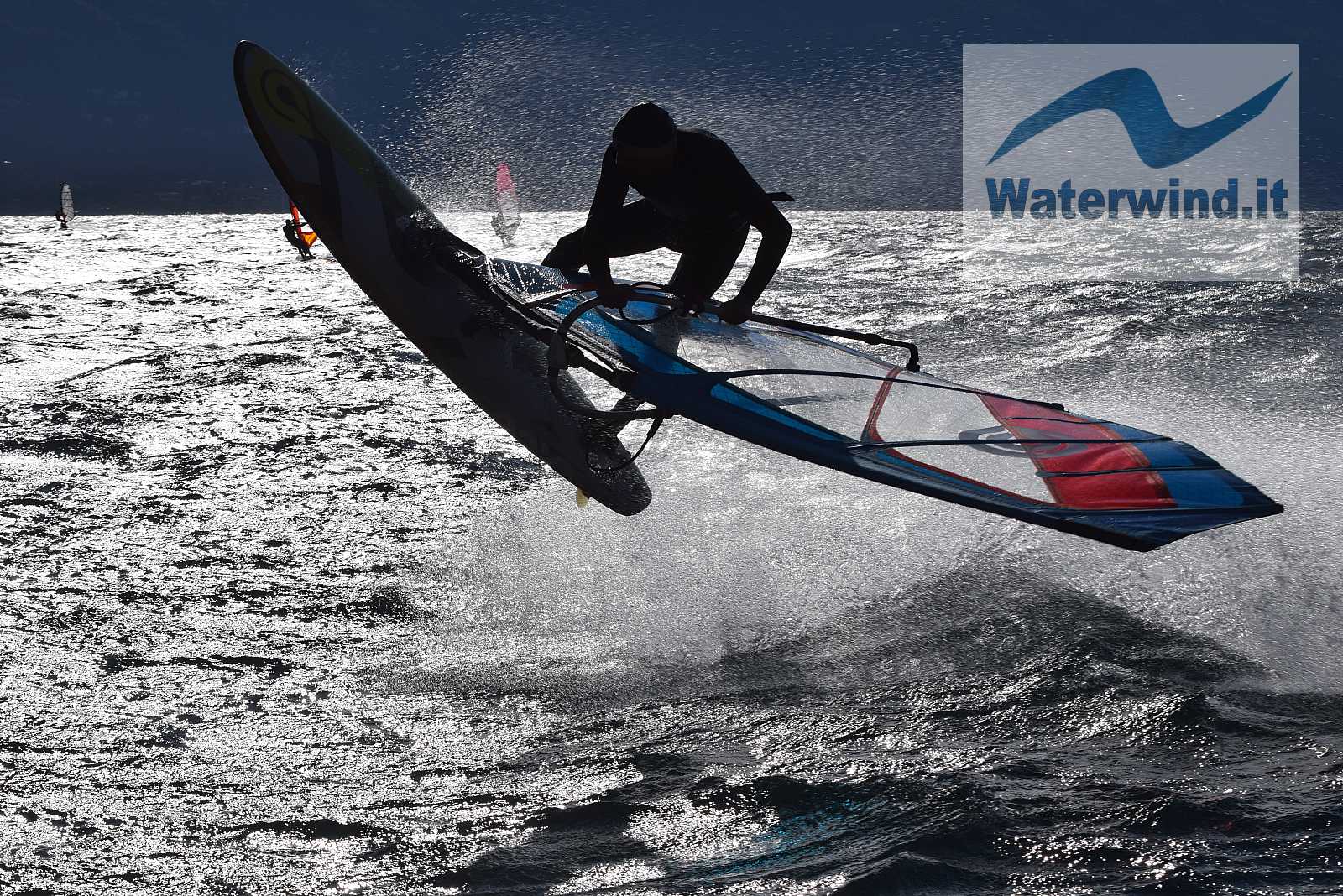 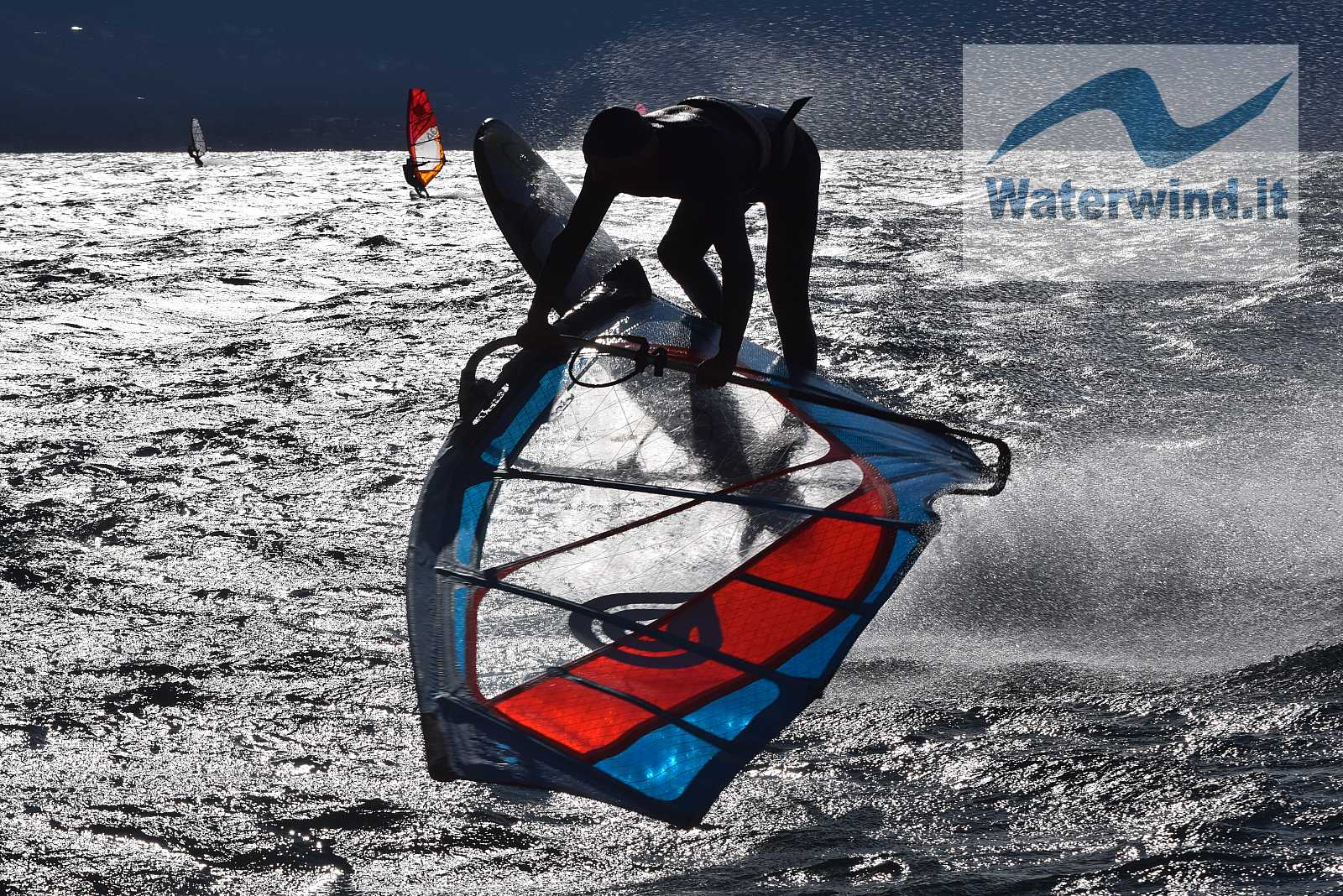 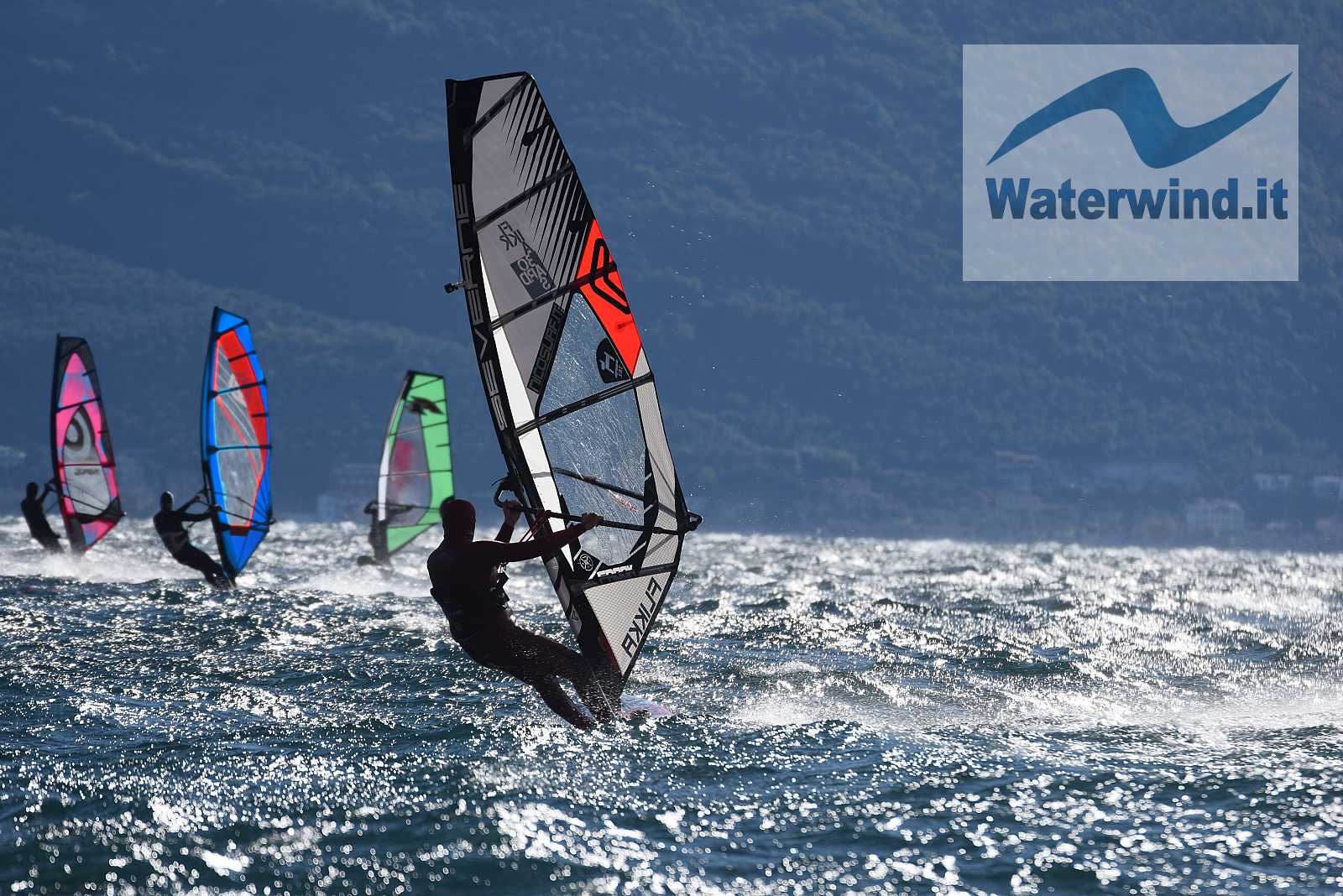 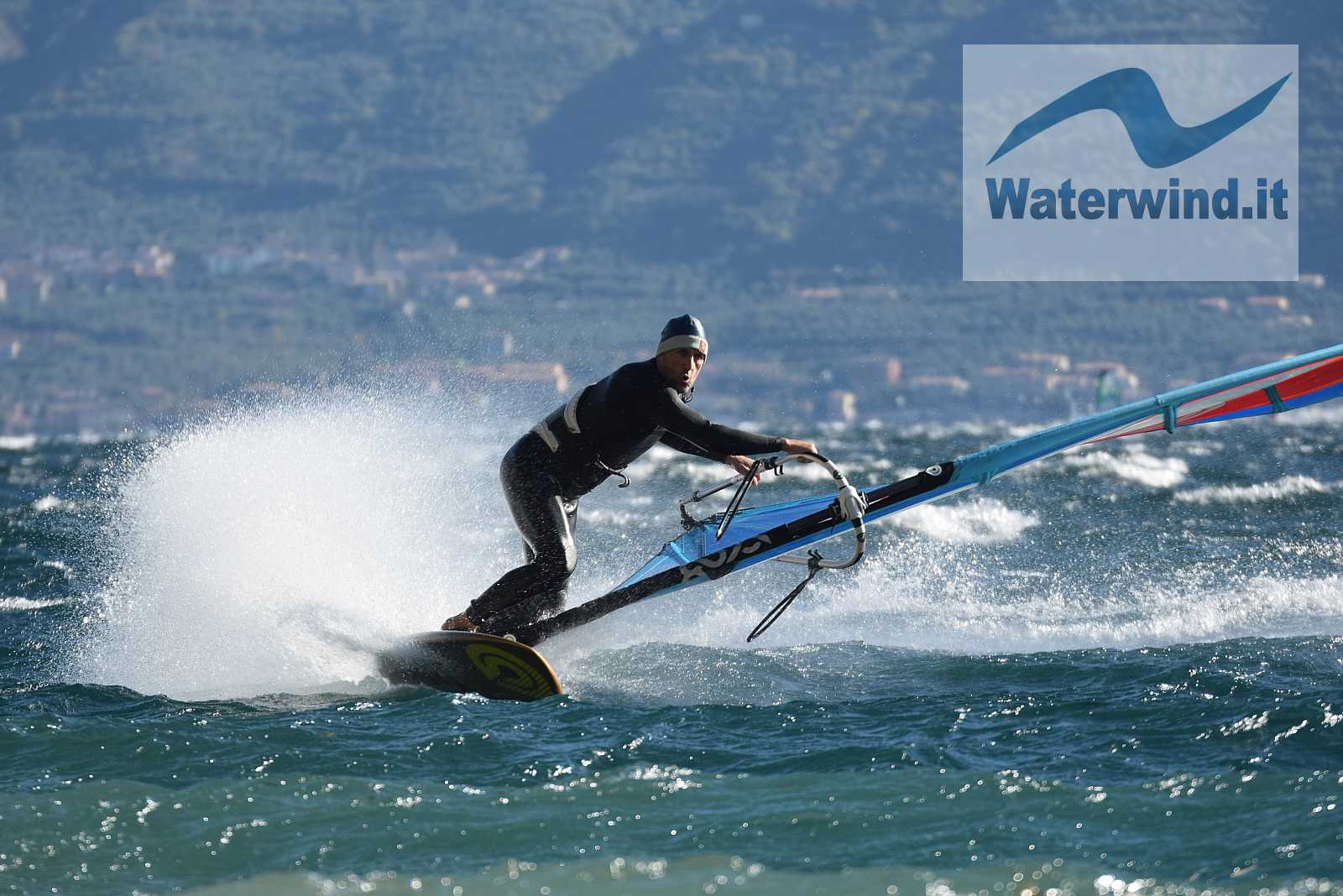 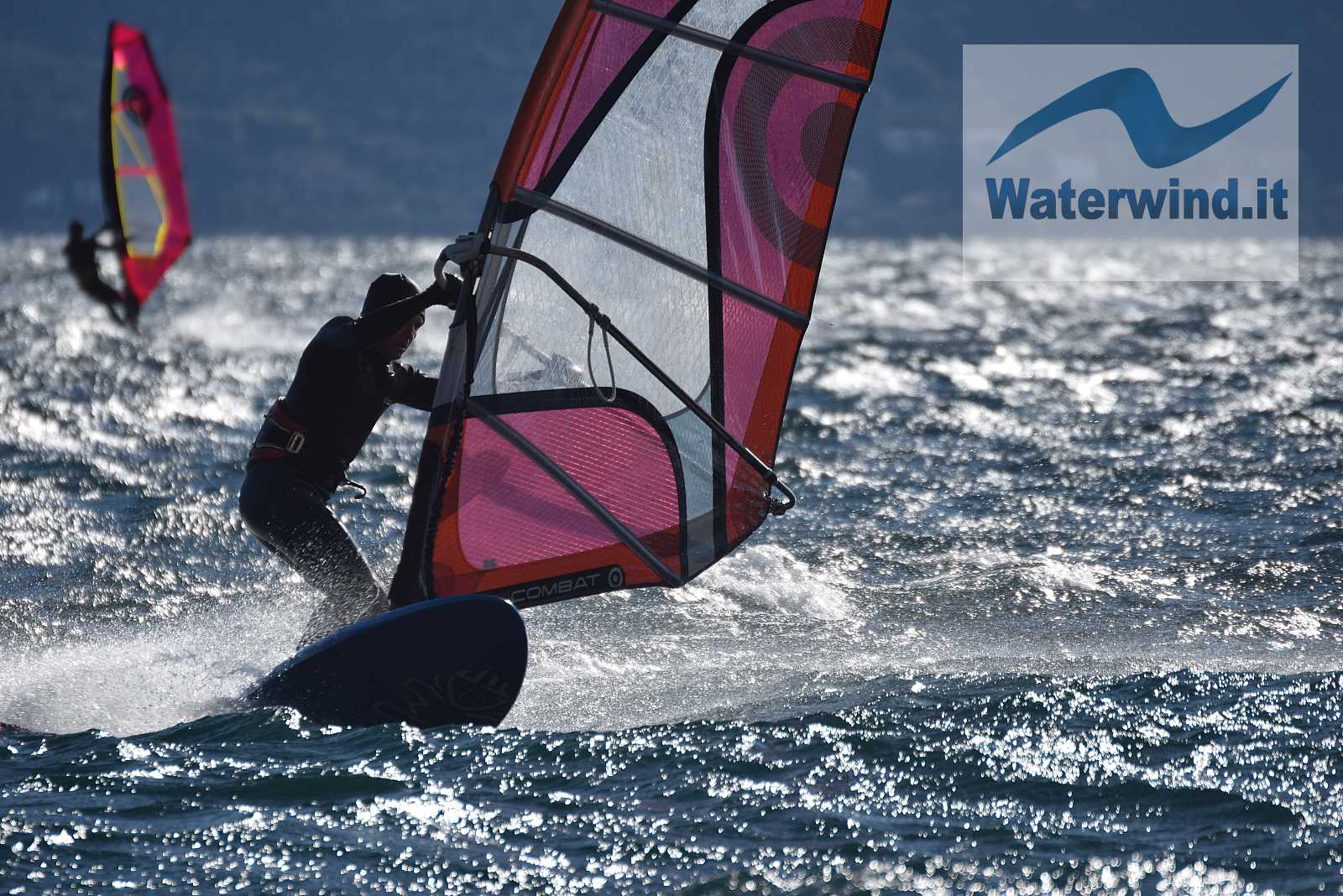 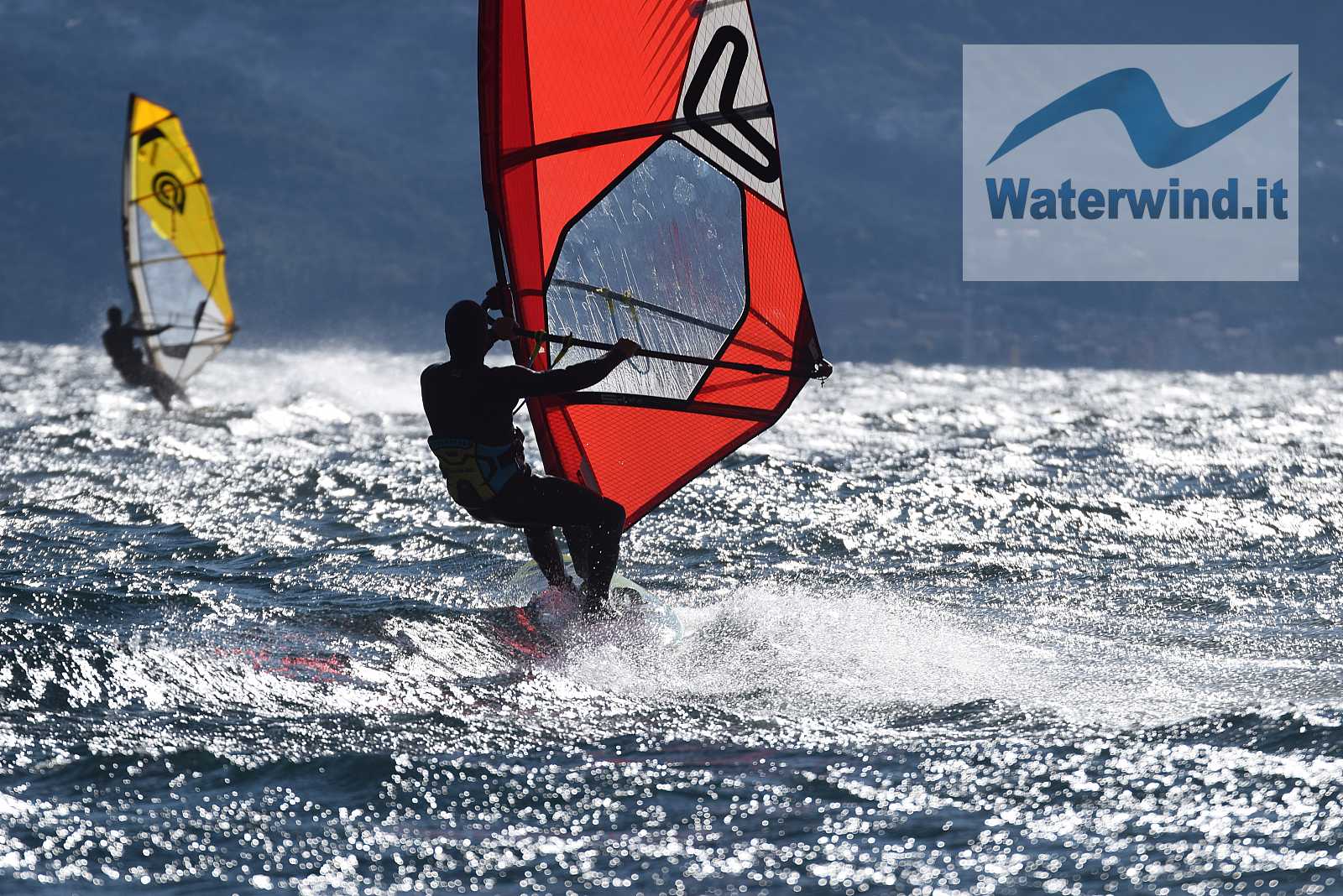 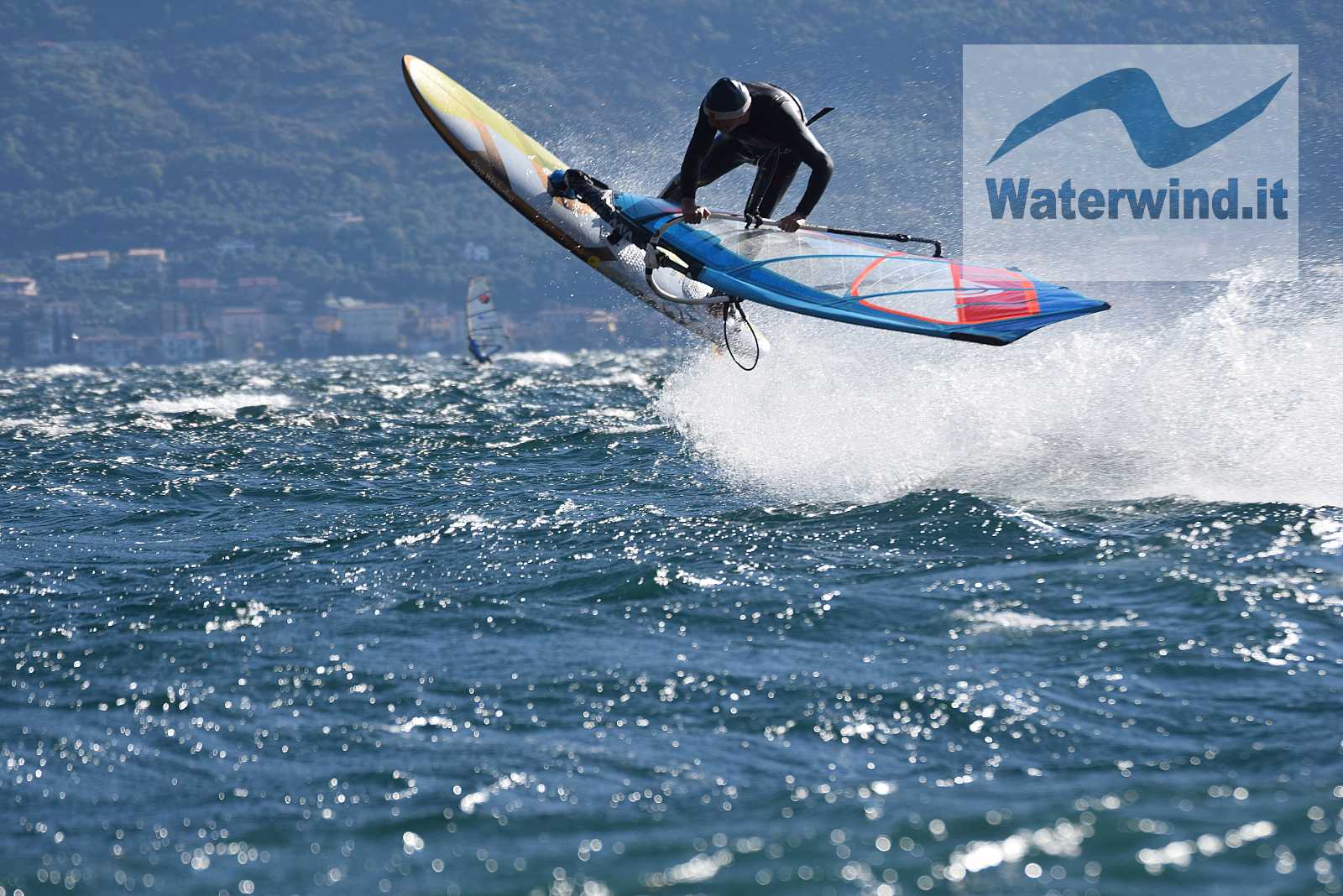