I knew that I would also have to take the 80 liters board and the 3.7 sail with me. What a beautiful wind blast at Pra 'de la Fam, the mythical and our beloved spot on Lake Garda. This morning we enjoyed a windsurfing session full power, with a bit capricious wind, initially, but which, from 10.00 onwards, turned out really nice.

Many had understood that, today, a very good Peler would finally have blown. The thunderstorms expected in the afternoon and yesterday evening, in Val Camonica and in the Sarca Valley, have finally lowered the night temperatures, north of the lake, shaking them from the constantly high values ​​of this summer, which doesn't want to end.

The Austrian riders had understood this, and had already occupied the Pra' de la Fam parking lot last night, with at least a dozen cars and vans. Many Italian riders, from lake Garda, and from Milan, had also understood this, some arrived at the spot last night, others have arrived early this morning. So many known faces, and friends present at the spot, to be a midweek day.

Last night, while I was driving along the Gardesana national road, I was able to see lots of lightnings on the mountains north of the lake. Once arrived at the Pra' parking lot, I was greeted by nice gusts that descended from the northern lake area, and by a still warm temperature. I updated about the situation, and wrote in the Waterwind forum: "I have the impression that I am wrong not to have brought the 80 and 3.7 with me....." 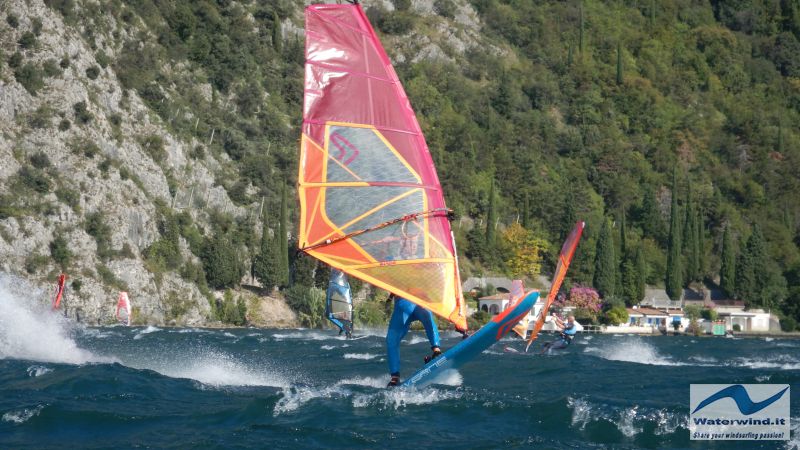 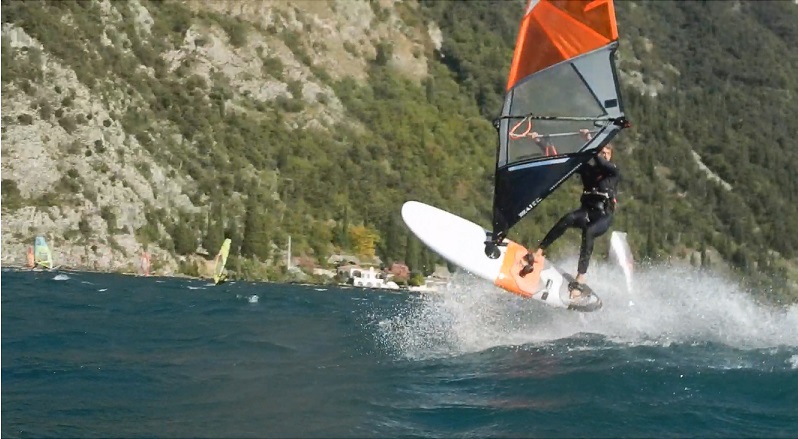 Upon awakening, around 6.30, I greeted the other known riders already present at the spot (Andrea, Alessandro, Giovanni), reassuring those who doubted about the intensity of the Peler. At 7.00 in the morning, the wind was still far from the spot beach (but, we know that it approaches the shore, when the sun comes out of Mount Baldo, and lightens the cliffs above the beach). But looking south, you could see the surface of the lake foaming really well.

I took an excellent cappuccino at the parking bar, to wake up well, and I started to rig. What I had as the smallest gear with me.... I prepared the Tabou Pocket 94 2016, which I set with the Zinger T-Lab 11 fins (side), and with the MFC TF 18 fin (central). I didn't trust to match the board with the K4 fins, and I was wrong. The fins I chose, in G10, were also too stiff, and didn't help much me to manage the over-powering.

In the first part of the morning, the wind was not perfectly spread over the whole spot. In the first 100-150 meters, near the shore, at times it blew strong, at others it arrived weak. Instead, offshore, the wind was immediately very strong, with gusts surely around 35 knots, in some cases such as to nebulize the surface of the water. 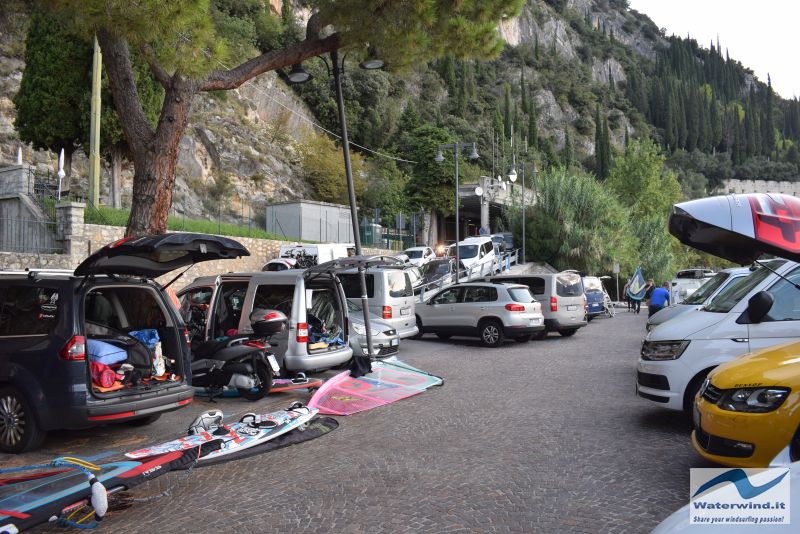 It was a pity, because approaching the shore, in addition to a more regular water level, in moments of well spreaded wind, the undersigned was correctly powered. Offshore, the water level was a bit chaotic, for most of the session.

In the water, heavy traffic, for a midweek day. Hence, that feeling of windsurfing party, which inspired me the title.

At a certain point, it also seemed like the speed loop party, many were the riders whom you could see landing one. Indeed, gliding speed was generally such that a little chop was really enough, to detach and jump high.

Let's speak about speed loop ..... I have to find the courage to really start trying it. Today, more than one wave, and more than one jump, would have been good to try it out, but the speed inhibited me a little. Then the wind has forced me to make an involuntary one, when a really strong gust has slowly but surely made me do a great catapult with both feet in the straps, in full glide. Triceps against the bow of the board, and inevitable pain and limping at the end of the session. But in the water with the warm muscle, I didn't suffer that much and went on.

After 15 minutes in the water I went back to fix the boom end to the lower clew of the sail and reduce a bit the power. Thus, the sail was more manageable, although I must say that I was substantially over-powered for the whole session, especially offshore. And I must also say that I am not entirely convinced by the pairing of this sail with the Ezzy Hookipa 370 mast, which goes quite well with it, but is probably a little too stiff, and makes it more powerful and less neutral. I should try it with a Goya 370 (offers accepted).

The slight overpowering allowed me, however, to explore the spot at will, also riding in front of the houses windward of the spot beach, where the wind is generally better and stronger (but today there was no need for an increase in intensity) . In this session, I also had the opportunity to take some photos from the water with the compact camera. I hadn't done it for a while, and I must say that the results, especially at Pra', are interesting.

At about 9.40, I got out of the water, to rest a bit, and to take some photos and videos even with the Reflex camera. I admit that at this point of the session, I was only partially satisfied with the wind quality, and with the general conditions of the spot. 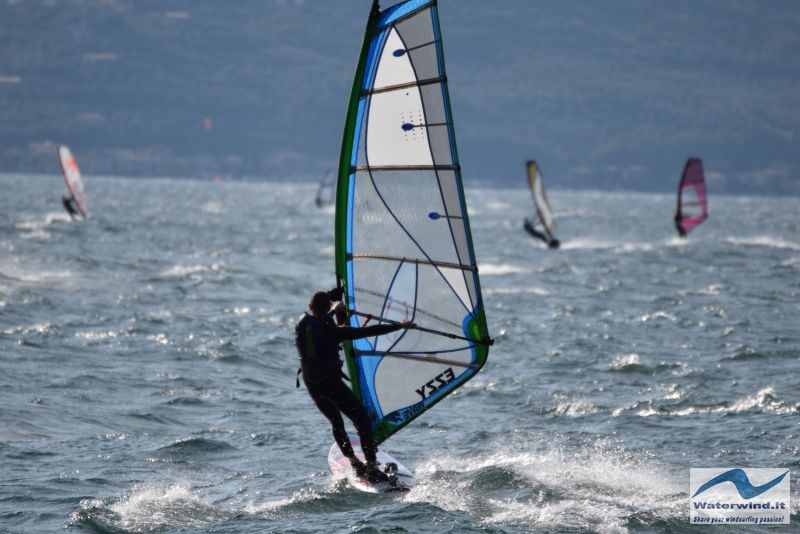 But, at 10:10, when I got back into the water, the something magic happened. The wind began reaching strong and steady the shore (probably, in the first part of the session some clouds covered the sun too often), and offshore it decreased just a bit in intensity, but it still remained close to 30 knots.

I must say that, for 50 minutes, I've really enjoyed. With new energy, also thank to the stop at the beach, I started to maneuver well, trying above all to jibe with all the possible variations. I must say that the conditions were not easy at all. I came out from some jibes, having dropped the chop in front of me, and gliding in switch on his face. Strange, but funny. I still have some work to do on the jibe, when I enter it on starboard tack, where I still fall too often, and which I do not close smoothly.

This morning it is also complicated to close the fast tack. I still don't know exactly how to manage the chop hitting the bow when I head up, which punctually slows me down, or destabilizes me. To tell the truth, I had closed a really nice one on my way back to the shore, but, when it was time to start again on the new side, I found another rider on me, who almost hit me. Perhaps, I did not look again at the last moment before turning, but many do not keep an adequate margin of distance. Anyway, it went well, with no damages.

After 11.00, my personal "drama" went on stage .... The Peler didn't want to go down (when I left shortly after 12.00, it was still quite tense). But I had to go back to the office by 2pm. My slacker soul (or more simply my windsurfer soul) didn't want to get out of the water, and insisted on trying some other maneuvers (come on, just only few rides, I told myself - like children ...). My mature and responsible soul tried to convince me to go back to the beach and put the session to an end ....

In the end, the fatigue, after three hours overpowered in the water, decided for me, and, since I was starting to maneuver badly, made me return to the shore.

After solving a small problem, shortly after 12.00, I left to go back to the office, where I arrived limping..., but with a smile!