Paternoster is the farthest windsurfing spot from Cape Town in the Western Cape, but when it works, it gives such beautiful conditions, especially as the waves quality, that, in general, it pays back the trip inconvenience. Here, you always come back with pleasure, even to enjoy the magic of a beach, whose image will remain printed in your heart.

To reach Paternoster from Cape Town, you must drive along the R27, pass Langebaan (a freestyle spots, see further), and at the junction with the R45, take this road until you reach Vredenburg. After reaching this small town, take the R399, and follow the signs to Mosselbank, until you reach the nice village of Paternoster.

It is a village of low houses and villas, all white, in which there is a frontier outpost atmosphere. And indeed, here, apart from the two magnificent beaches, local lobster fishermen, and a few restaurants to eat them, there is not much else around. Moreover, even during the journey to get here by car, you will drive along endless straight roads, and you will cross a mostly uninhabited landscape, with low vegetation as far as the eye can see, with some sporadic deviation for some ranch, or for the entrances to the West Coast Peninsula Park. 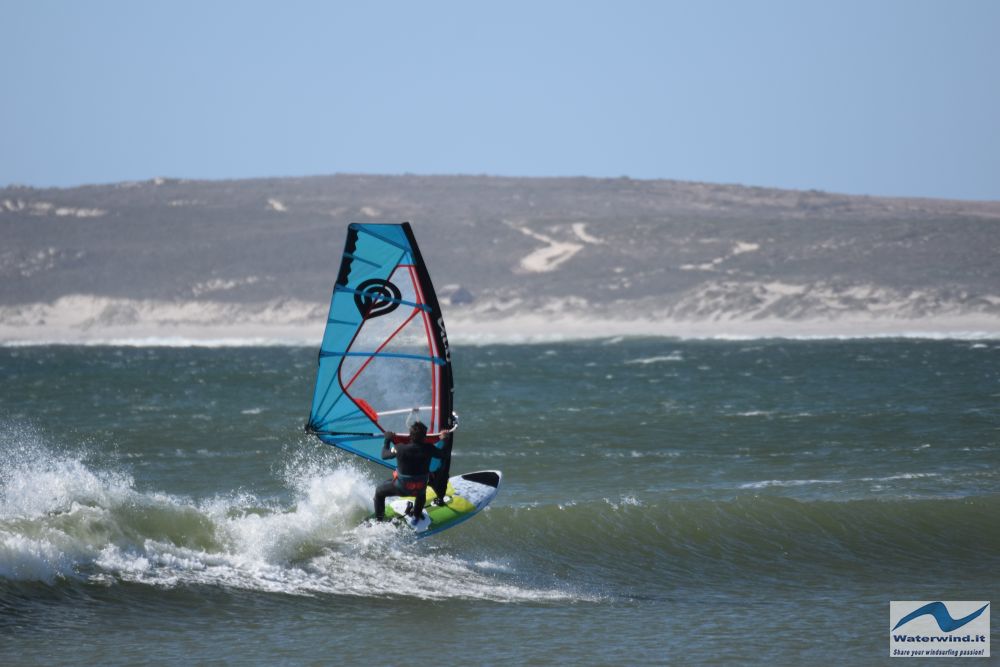 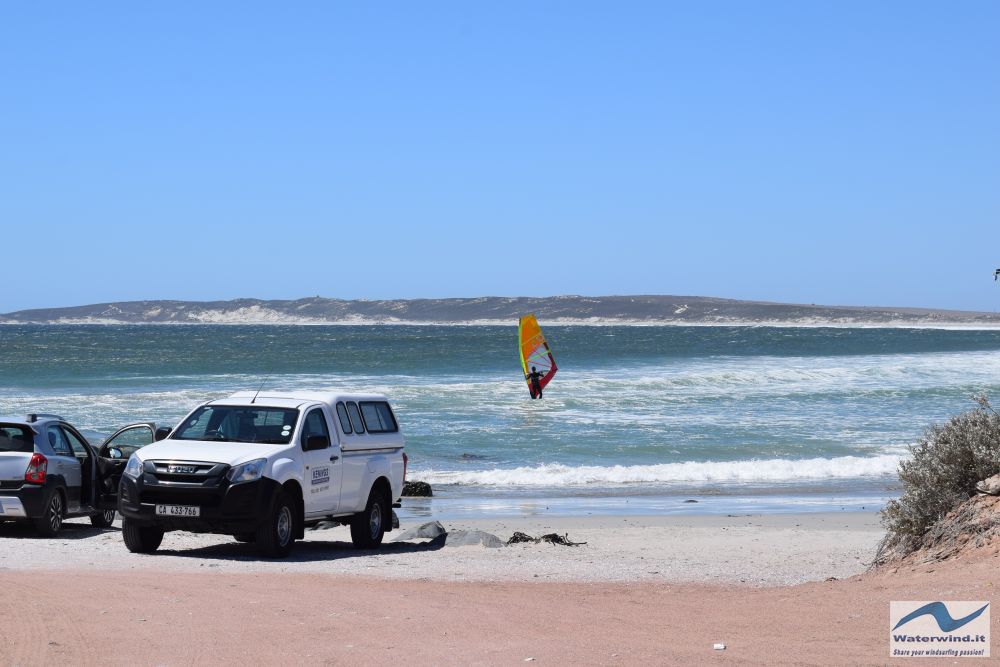 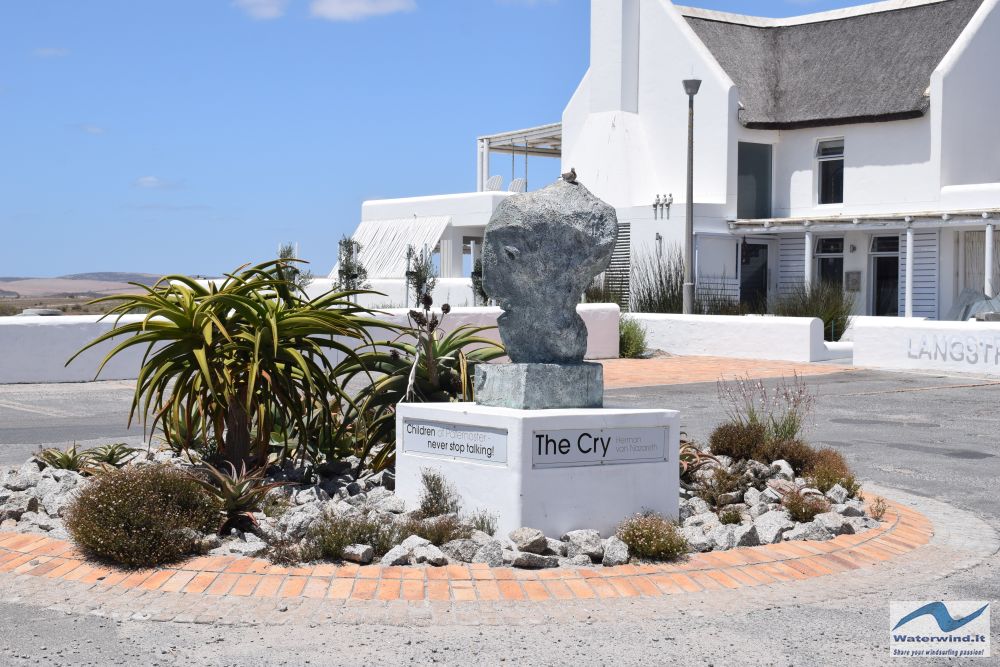 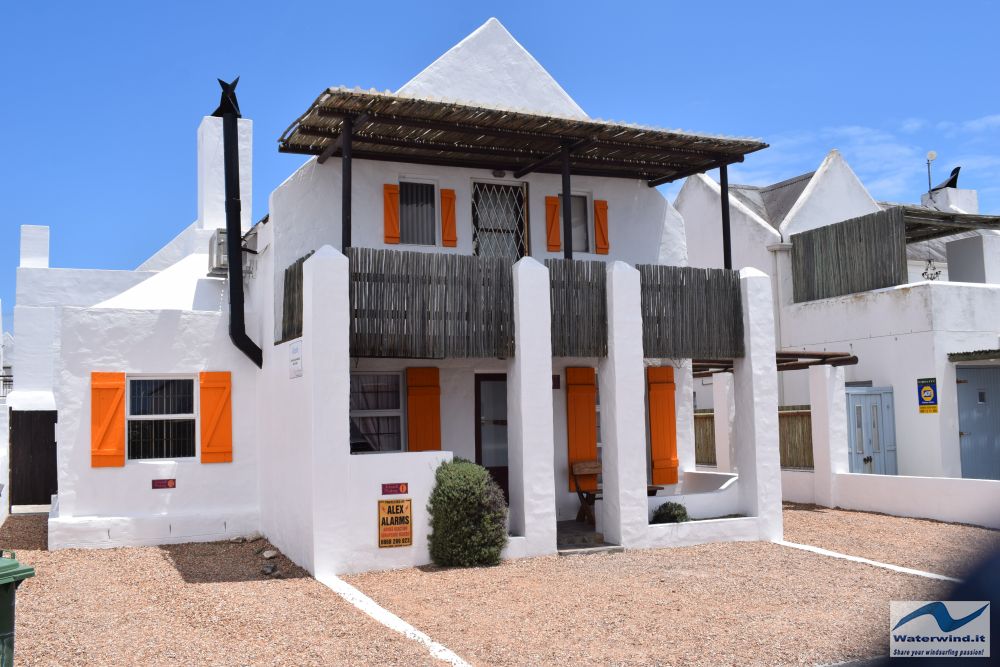 The parking lot is divided into two parts: a wider area first, immediately after the entry, usually exposed to the wind; a second area further, along the dirt road parallel to the cliff that closes the spot beach to the South, which remains a bit more sheltered from the wind (due to some adjacent buildings).

Here, you do not have any refreshment points, or other services. You have to go back to the village to find some commercial activity. In any case, as soon as you see the spot working, you can not help thinking of being in a playground, and be happy to have reached it.

You mainly get into the water from the beach to the North of the parking lot, although we happened to see windsurfers in the water, even in the southern one, in front of the village. 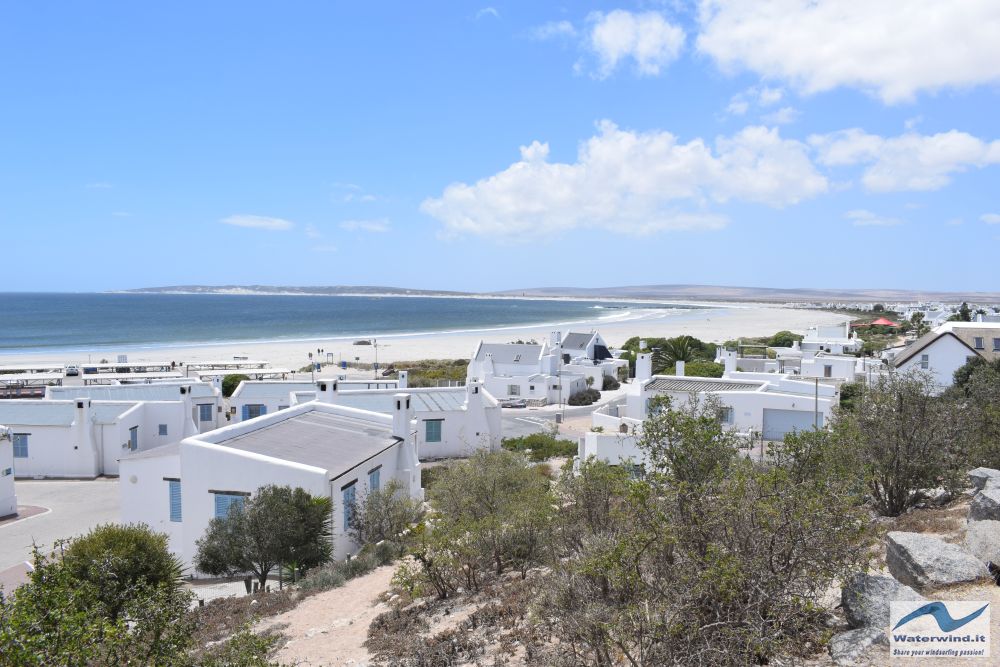 The spot works best with the wind from South-West (Side/Side-on). It still works decently with South wind (Side/Side-off), while with wind from South East (Side-off/offshore), the spot works with a very gusty wind, coming from the inland. In these last conditions, the most expert riders can still enjoy the spot, if there are nice and smooth waves: they ride mostly floating, without gliding, and once arrived about at 150-100 meters from the shore, they start to surf the waves, with an offshore wind, which is generally considered ideal for riding the waves.

The wind from the South West is the one that arrives over spot better spreaded. Moreover, when the wind takes this direction on the Western Cape, the spots closest to Cape Town do not work, or are only reached by a light wind, while the West Coast Peninsula benefits from a good tense wind at above 20 knots. In such cases, coming to Paternoster for windsurfing is the only one possible choice. 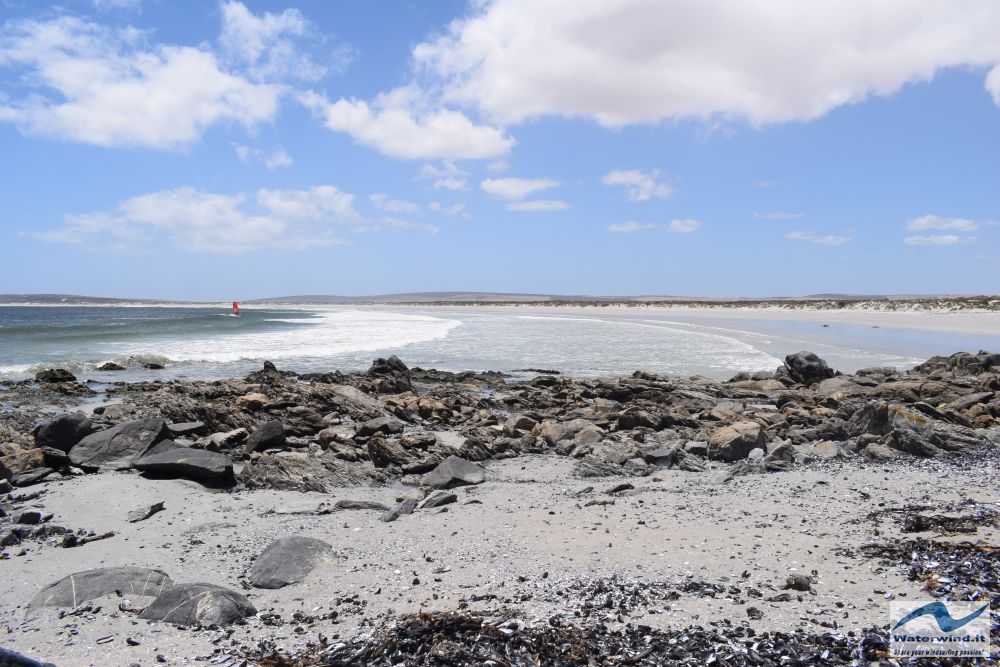 With the wind from the south, you have intermediate conditions between the two ones above mentioned: the wind starts to be gusty, but not exaggerated.

Beyond the wind direction, however, the peculiarity of Paternoster is the waves quality. The waves, in general, are never too high at Paternoster. However, even in the case of wind swell, they are wonderfully smooth and clean. They are not easy to be read when offhsore, though, because you only have small sea surface reliefs, which are accentuated more and more by approaching the shore, until, about 150-100 meters from the beach, waves, finally, become steep, clear, and surfable. before definitively breaking at about fifty meters from the shoreline.

They are also rather fast waves. In case of side-off/offshore wind, to catch and start to surf them, you have to acquire some speed, get planing, sailing parallel to the coast, and not heading towards the beach, because, in the latter case, you would end up to inevitably lose speed, entering into the wind, and would lose the wave.

The other value of Paternoster is the beach, which, first of all, is very scenic, and fascinating from the natural point of view. But it is also a very long beach, which allows you to drift a lot, without running any risk, except for the fact that you have to take a walk, bringing back your equipment, to the parking lot. 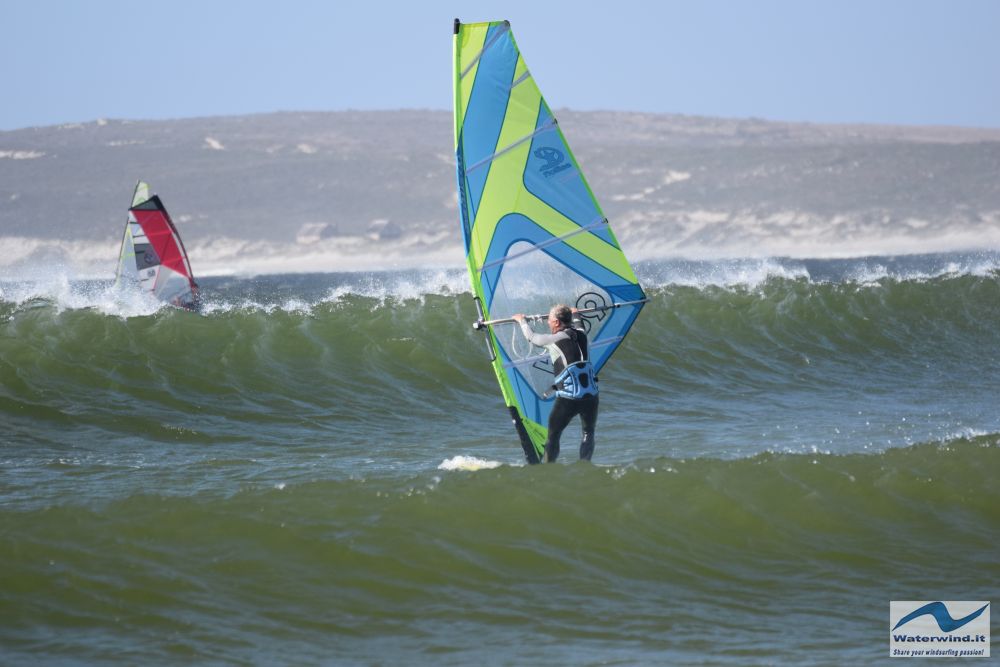 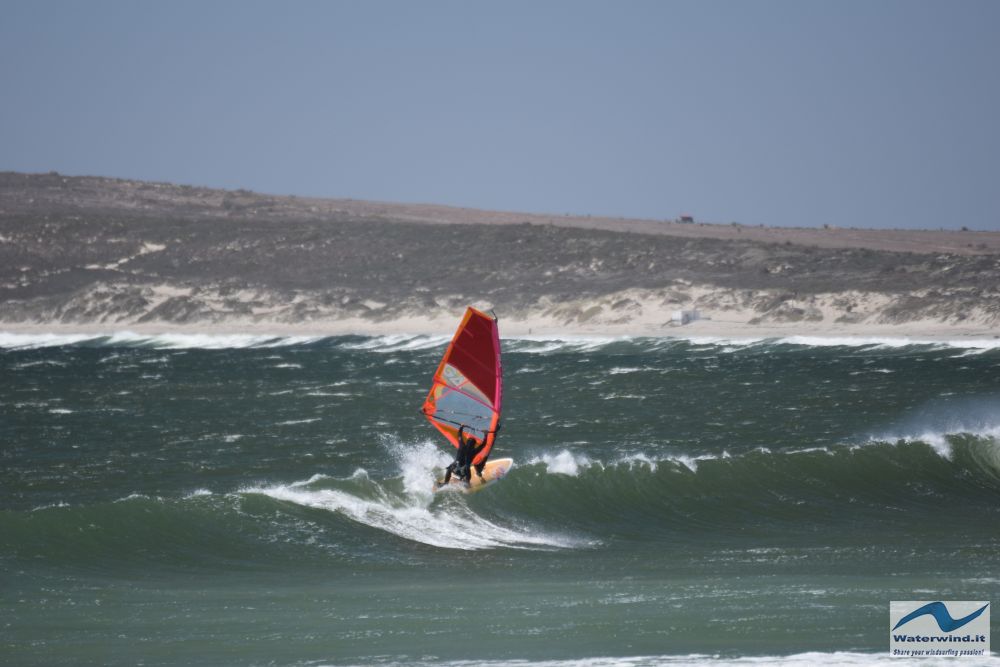 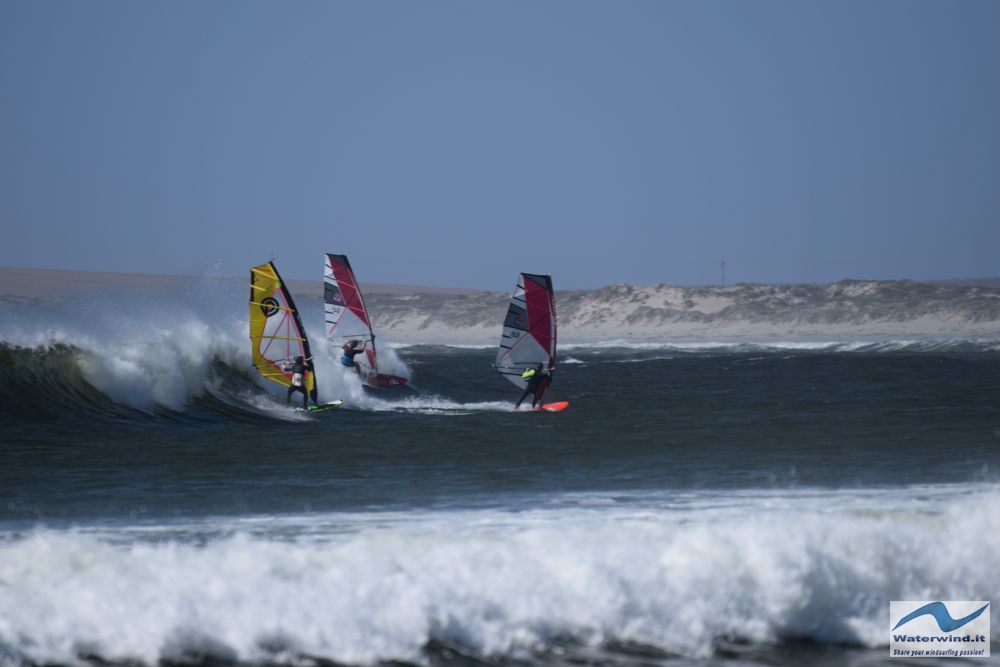 Generally, the best waves get up immediately to the North of the cliff near the parking (Point break). There, you will see most of the surfers gathering. Sometimes, however, the best waves are located right in the middle of the bay, and then you will see the fleet concentrating there. In the center of the bay, especially in the South or South East wind, the wind is also a little better spreaded, being less disturbed by the coast, and by the houses of the village.

Finally, keep in mind, both in exit and return, to keep at least 20 meters away from the cliff near the parking lot, because within this distance there are some underwater rocks, which, above all at low tide, could damage your board.

Read also the report of our sessions at Paternoster (in italian, but you can use Google translate button).

Read the general report of our trip to South Africa, with many useful tips for organizing your journey (also in italian at the moment, but soon it will translated into English).

For freestyle (or slalom) addicted riders, we also point out that on the road between Cape Town and Paternoster (about 50 km south of Paternoster, then closer to Cape Town, which is an hour's drive), you have the spot of Langebaan. A wide, very sheltered bay offers, in correspondence of the homonymous village, a spot of completely flat water, with side wind. The spot beach can be reached by heading towards Bree Street, and running all the way to the final parking lot, near the beach. You are in town, and you have commercial businesses, as well as a kitesurfing center, and some centers that also offer services for windsurfing (eg Cape Sports Center Langebaan, just north of Bree street).

The spot is much loved by Kiters, but we have not seen huge crowds here, so don't be afraid of having to share the spot with plenty of them.

A video taken at the spot