We finally tried the spot of Bordighera, this week end, and Sunday the spot has given memorable conditions. High level of riders in the water, and show assured.

Wind: East / North-East. In the morning, at 30 knots, on average; in the afternoon, about 25 knots, unstable as intensity and direction.

Water surface: steep waves of 1-1,5 meters, in front of the breakwaters right at East of the spot beach; long waves, of about 1 meter, near the shore; messy sea, offshore.

Weight of the Rider: 70 kgs 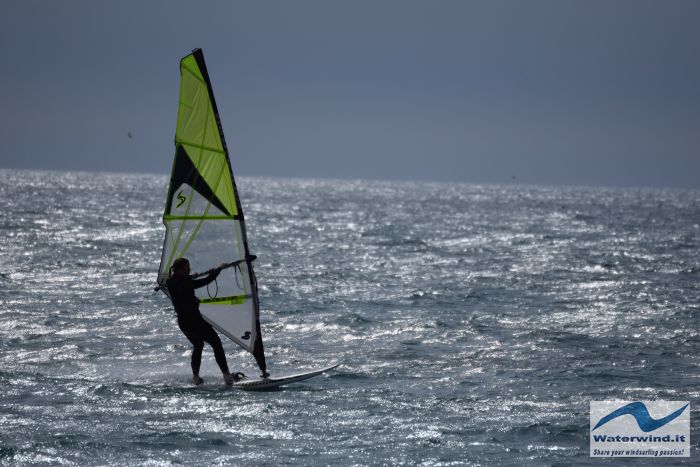 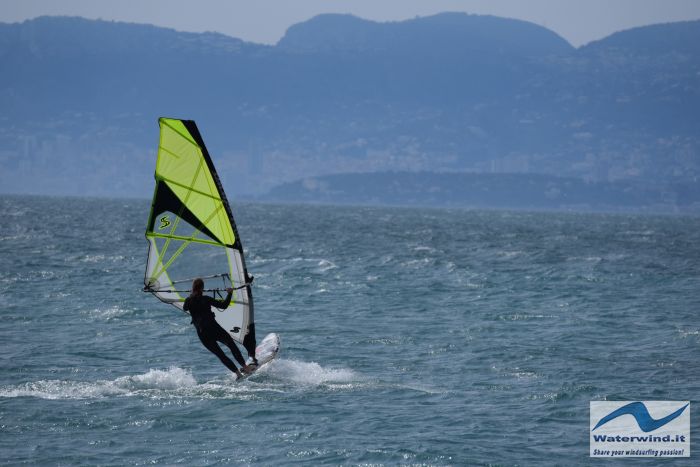 Water surface: long waves throughout the spot, of about two meters, steeper, higher and breaking, at the tip of the cliff upwind of the spot beach, with some sets of almost 3 meters. Except in the first 50 meters downwind of the cliff, an insidious shorebreak on the shoreline, of about one meter in height.

Weight of the Rider: 70 kgs 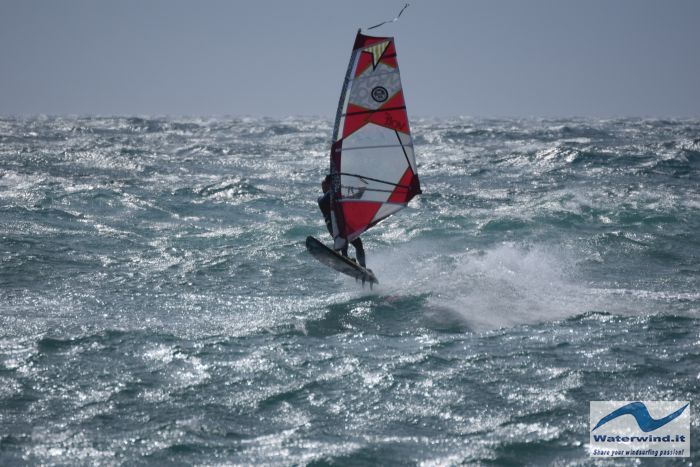 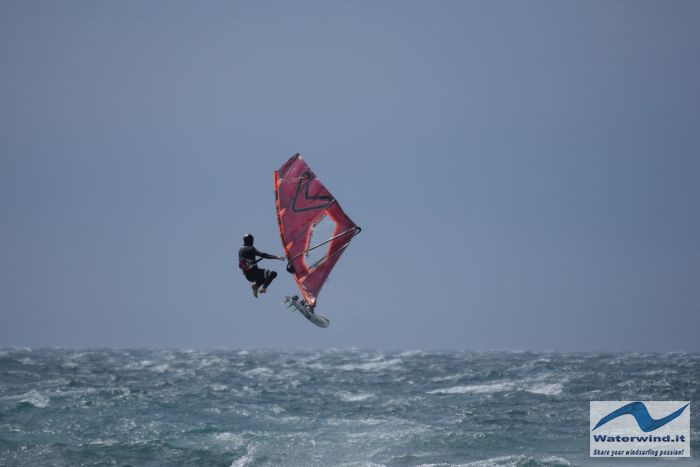 This weekend, we finally got to try the famous spot of Caranca at Bordighera (Liguria), were we have aimed to surf for long time. The intention was, actually, to reach Cannes Palm Beach (another spot that we loved), to enjoy two days of wind from the East / North East.

Saturday, however, traveling on the highway to France, we realized that already in Liguria, from Albenga onwards, the wind was quite good (while the forecasts for Cannes seemed to have turned worse). So, we decided to leave the highway at Bordighera, and to go there and have a look, also because the next day, given the wind forecast at 50 knots in Cannes, we would probably have returned to Italy, being expected about 35 knots, there.

Bordighera (read the spot review, here on Waterwind), on Saturday, welcomes us with a beautiful sun, and with wind from the East (excellent direction for the spot), very constant, and around 30 knots. Therefore, we decide to stop here, and to try the spot. I rig the Loftsails Wavescape 4.2 2018, which I am testing, matched with the Fanatic 87 quad, which I decide to try in Twinzer set, with a 17.5 cm Maui Ultra Fins x-Twin fins. Michele, my friend, meanwhile, prepares the Starboard Kode 77 and the Goya Banzai 4.0. 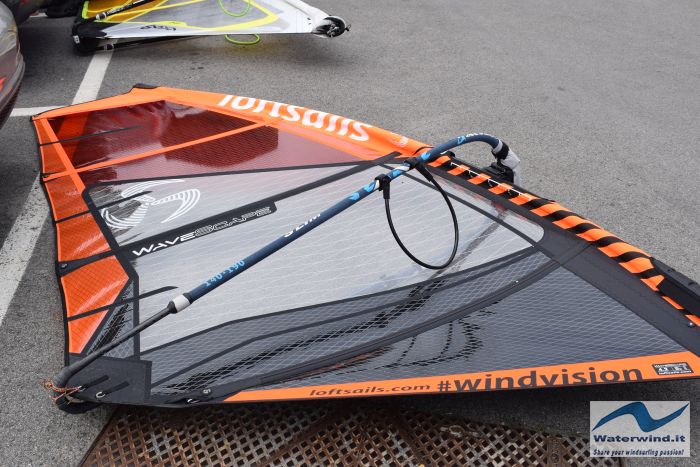 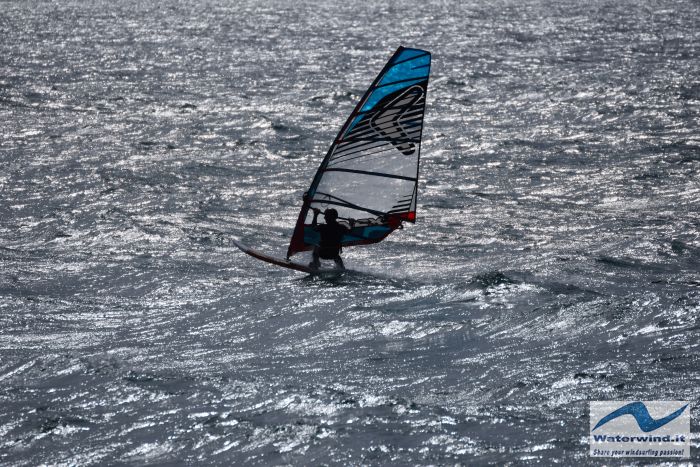 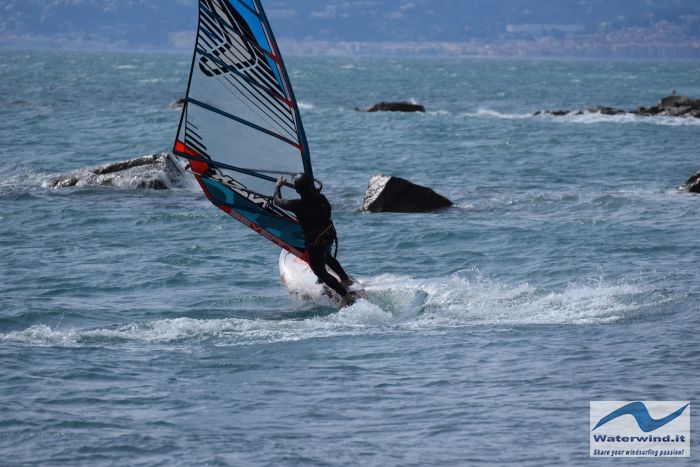 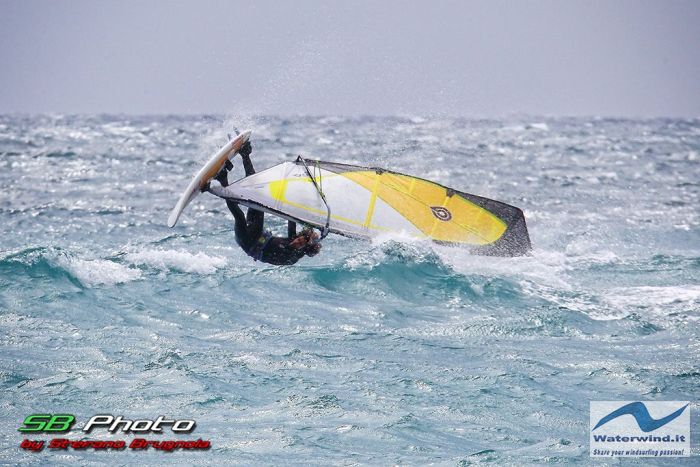 After the morning, in which the spot worked well, as reported by riders there, when we enter in the water, the spot still works for a while. Then, the sky gets cloudy, the wind rotates from the NE, becoming unstable, and near the shore, side off. The Quad, even in Twinzer set, is not in its environment......

I go back floating...., with some imprecation. We take a break to eat something. I return into water with the FSW 106 and 4.7, in a moment when the wind seems to be good again, even if it has got lower in intensity. Unfortunately, it is an illusion, and the wind will remain unstable for the rest of the afternoon, allowing only the riders with bigger sails to glide steadily. Even from Cannes, no positive news arrive. We console ourselves with a plate of seafood spaghetti in Bordighera, for dinner, and go to sleep nearby. 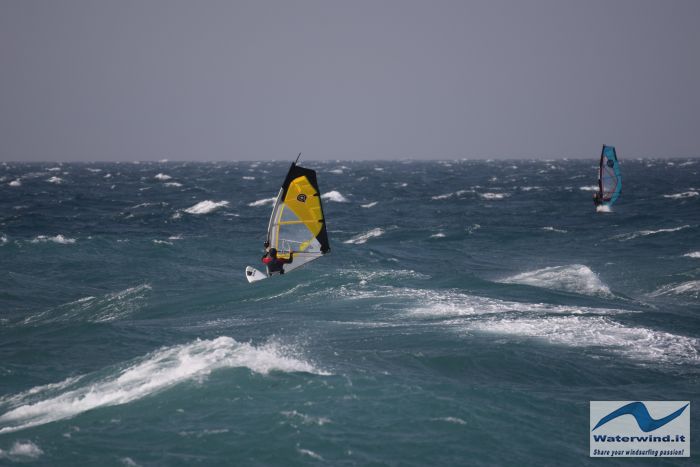 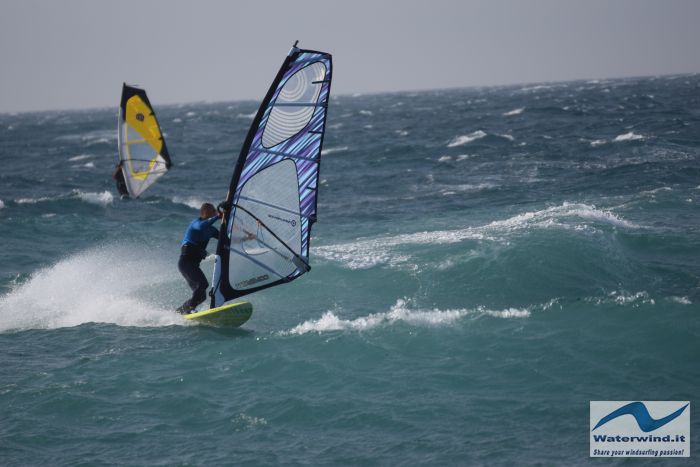 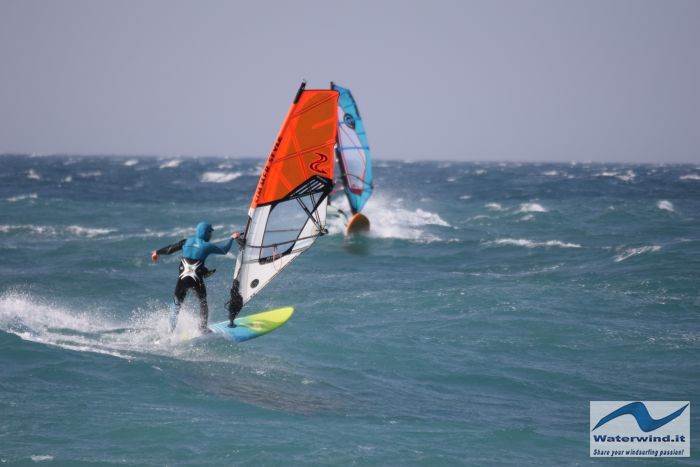 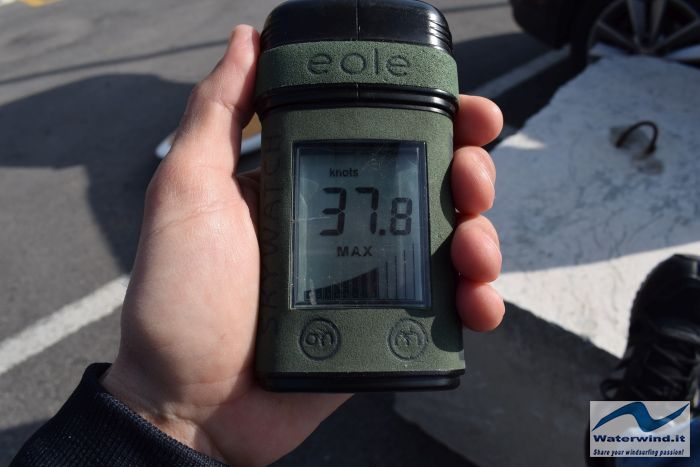 For the next day, a day with a photonic wind is waiting, and with some waves..... We do not know yet that we are in one of the spots that will show the most spectacular conditions on Sunday (another one was definitely Carrò, in France, as we hypothesized in the predictions in the forum of Waterwind)

At about 9.30, we are at the Caranca beach. We have breakfast quickly, and evaluate the situation. The wind is already on, and the sea is already rough. In retrospect, I can say that the spot will be good for our skills until 10.30 - 11.00. Then, a further wind increase, and the demanding conditions as a whole (which also require physical training) will make it become beyond our possibilities. It would have been better to ride at Imperia La Rabina.

But the show on at Caranca deserves at least one attempt.

We immediately meet Mirco, a rider from Brescia, who reassures us by saying that it is hard to keep the 3.7 .... 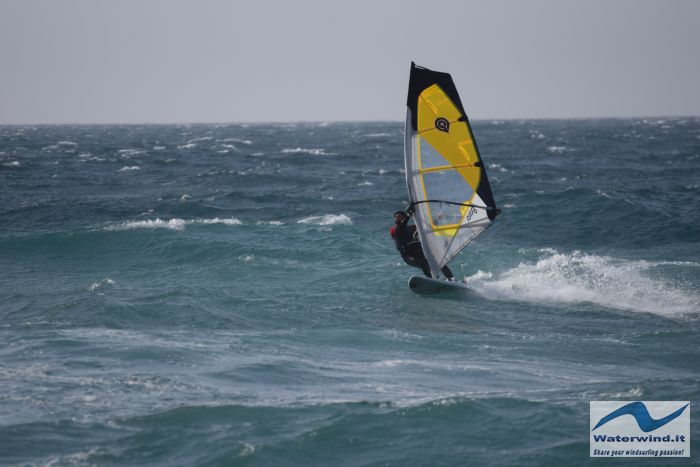 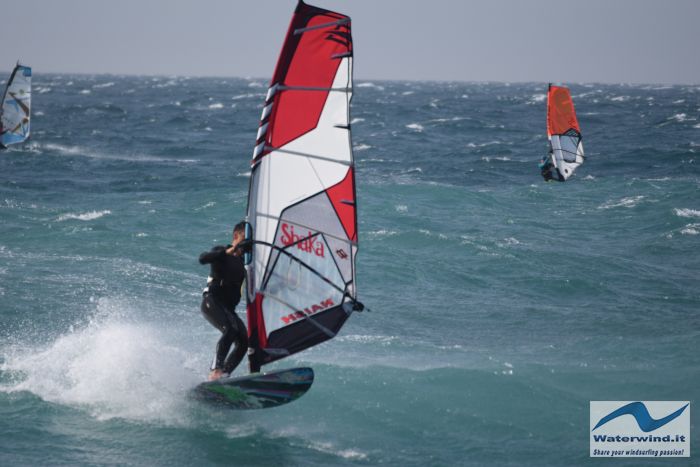 After some hesitation, with Michele, we decide to try, and rig our 3.7. I prepare the quad, set it with its 4 fins.

We start our session just before 10.30. To get into the water, I'm careful to start immediately downwind from the cliff to the east of the spot beach, to avoid the fearsome shorebreak, ready to eat the boards already on shoreline. I will admire then the entry into the water of Jacopo Testa (PWA athlete), much farther from the cliff, downwind: once left to break a couple of breakers, he will exploit the backwash, to enter with the board at sea, launching himself, almost running, on the board. Elementary Watson.....

Once I enter into the water, overcome a bit of apprehension in the first few minutes, I soon feel reassured by two elements. The Fanatic Quad confirms an exceptional board in these conditions: it holds the sea beautifully, carrying out all the necessary sudden changes in direction, and, above all, it remains in control, allowing the accelerator to be measured at will. If you want, you can ride fast (to jump, e.g.), or you can keep a slower pace, almost not gliding (to catch waves, e.g.). The other element that reassures me is the feeling of being correctly powered with the sail, apart from a few more bad gusts. But in the latter case, the quad comes in handy again, as it also bears the overpowering, very well. 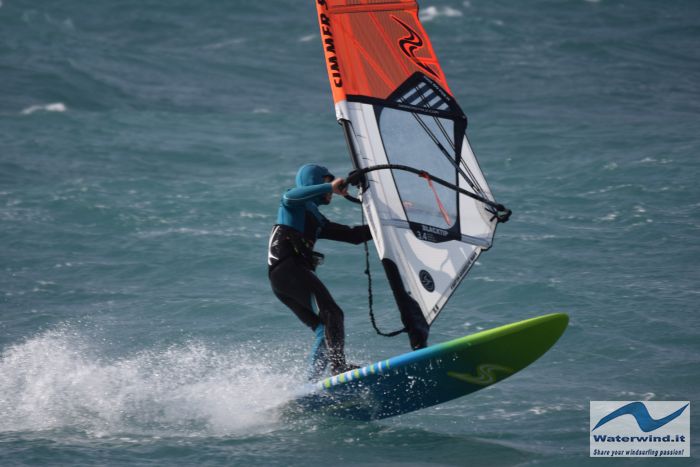 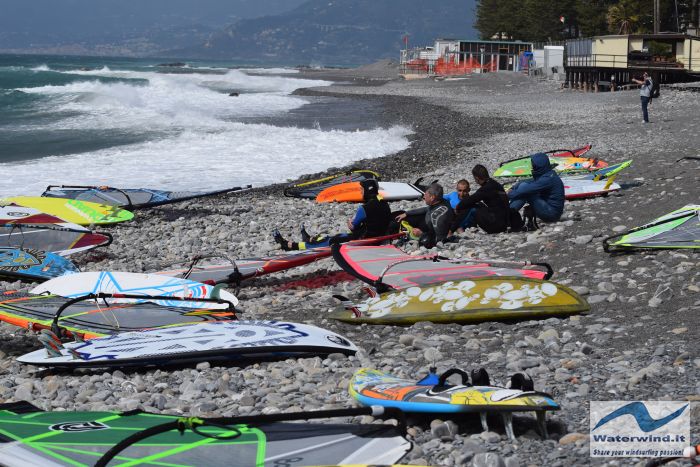 I do not open "gas" too much, to avoid jumping too much, and waste energy immediately. Moreover, here you jump on port tack ... and I prefer to jump on starboard tack. The waves make a certain impression, above all, in front of the cliff upwind of the spot beach. They are beautiful steep walls, and you just have to get on the lip with a minimum speed, to find yourself in the sky. The spot is crowded, and around me in the water, is a lot of people flying ...

In the ride back, I try, like most, to catch a wave crest, and then get off and surf it a bit. I do not want to drift too much, however, because I'm quite worried about a possible return to shore, where the breaking shorebreak can do harm to my equipment..... In the central part of the session, I relax, I enjoy the thrill of these fantastic waves, and at the end I can also surf well some of them, even if the problem remains the loss of speed in the cut back. The waves are beautiful, but it is not an ocean swell, that is much easier to read, and they require a little care. 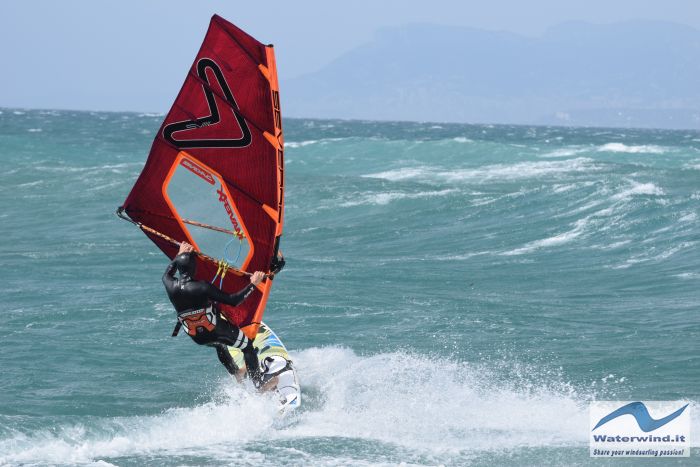 I resist for about forty minutes. I do not want to reach the limit of my energies, and when I start to feel a bit of labour, I point towards the shore. I can go back enough upwind, but I arrive, however, in an area where the shorebreak breaks on the beach. The output from the water is not good as a Pro rider...., but anyway, a bit with cunning, and a little with luck, I can come out with dignity, and especially without damage. 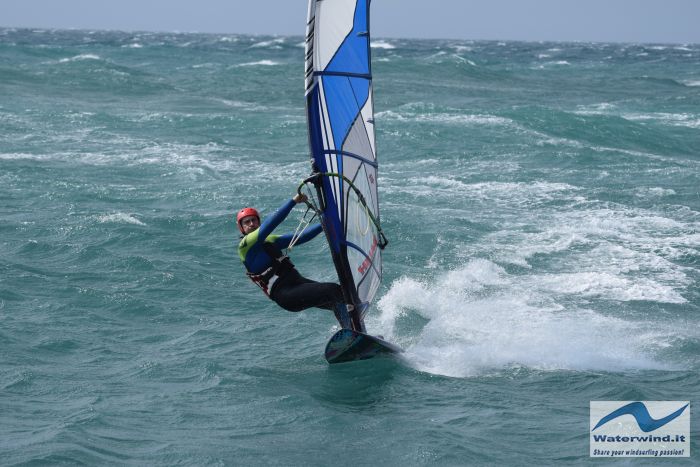 After our Sunday session at Bordighera, we stay on the beach to admire the best riders' show. And what a show!

Among them, the local Andrea Franchini (Severne, Novenove), owner of the school No Stress Team, which performs some high jumps of almost 10 meters, as well as a series of Forward and Back Loops, very clean ones, that get some "wow" from people at the beach. But for me, also the tacks and the jibes are also admirable, closed with a naturalness and a wonderful fluidity, when he comes in the inside. While I'm coming back to the car, I also notice a tall guy with a long hair, getting ready to enter, with the equipment sheltered from the wind, at the structure of a bathhouse. Is he Jacopo Testa? I will then have confirm that Jacopo was present on the spot. 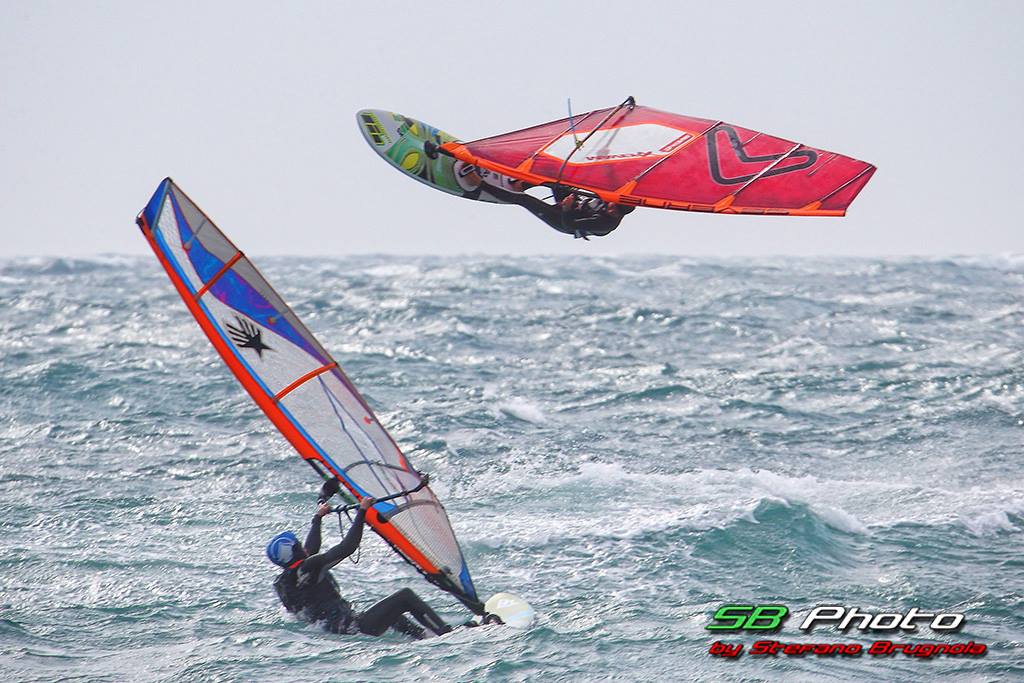 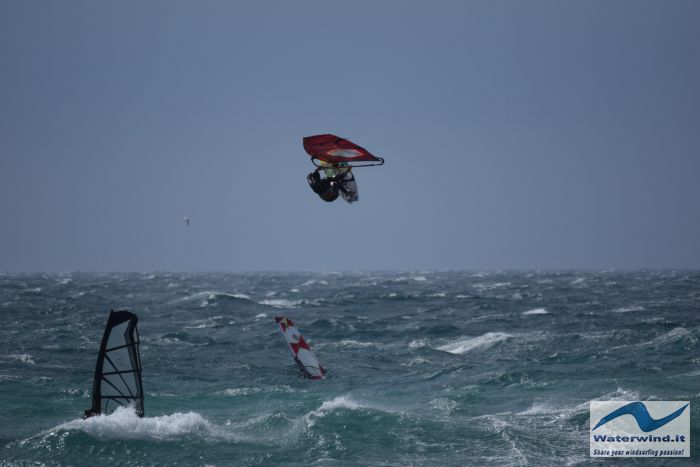 He enters into the water with a 68-liter RRD wave board. I follow him for a while. After having already admired him during the entry in the water, I follow him in the first jumps. He too flies very high, and very composed in the air, with the sail open; so I get the idea that he is Jacopo. 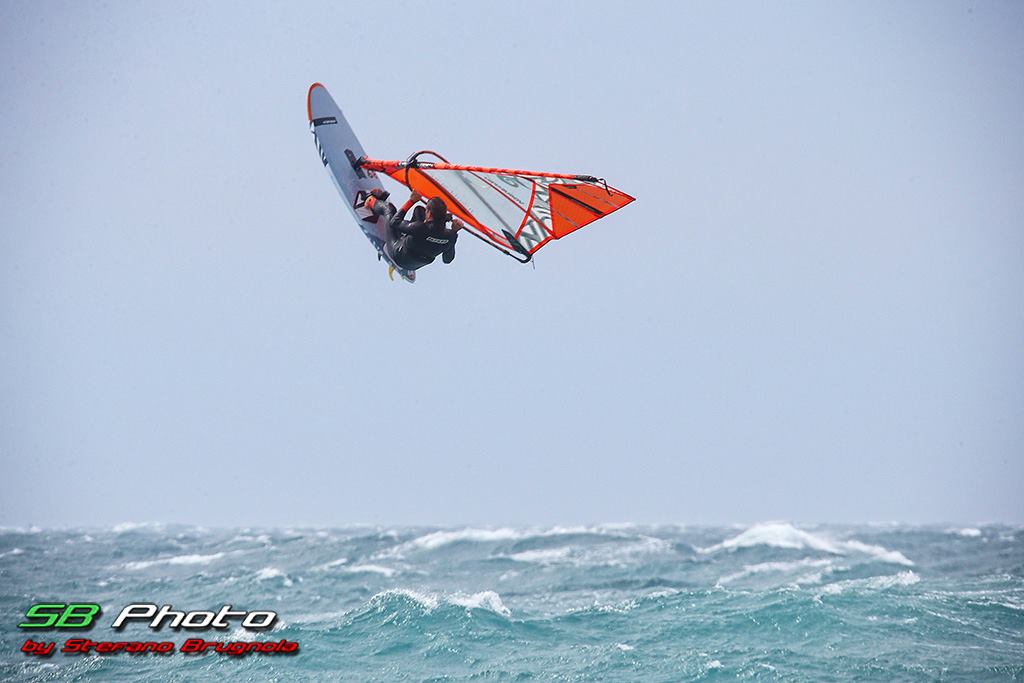 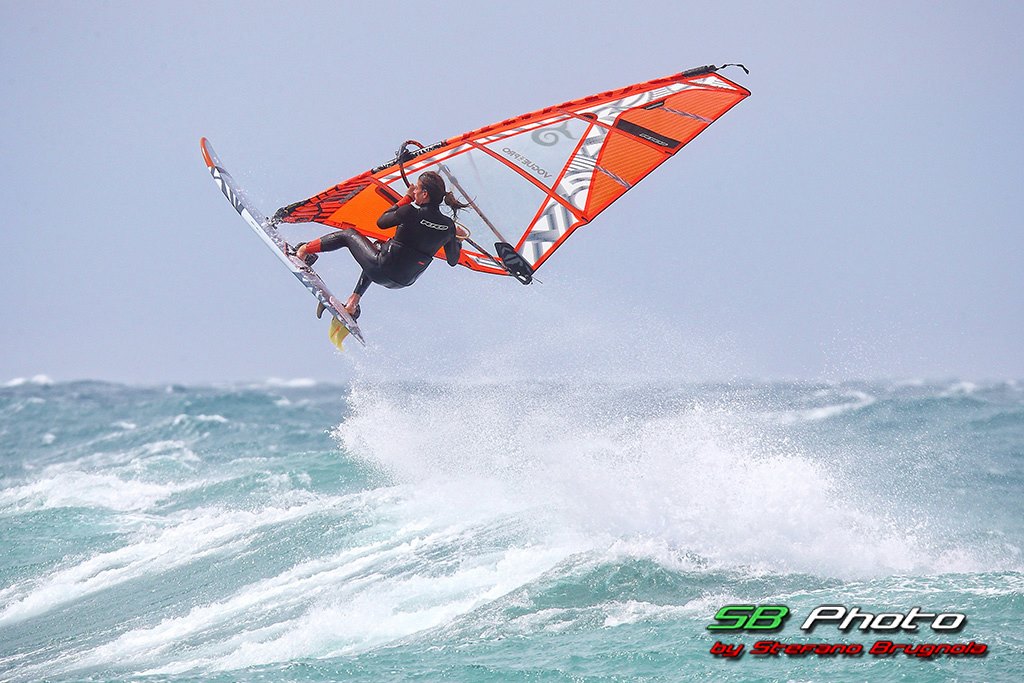 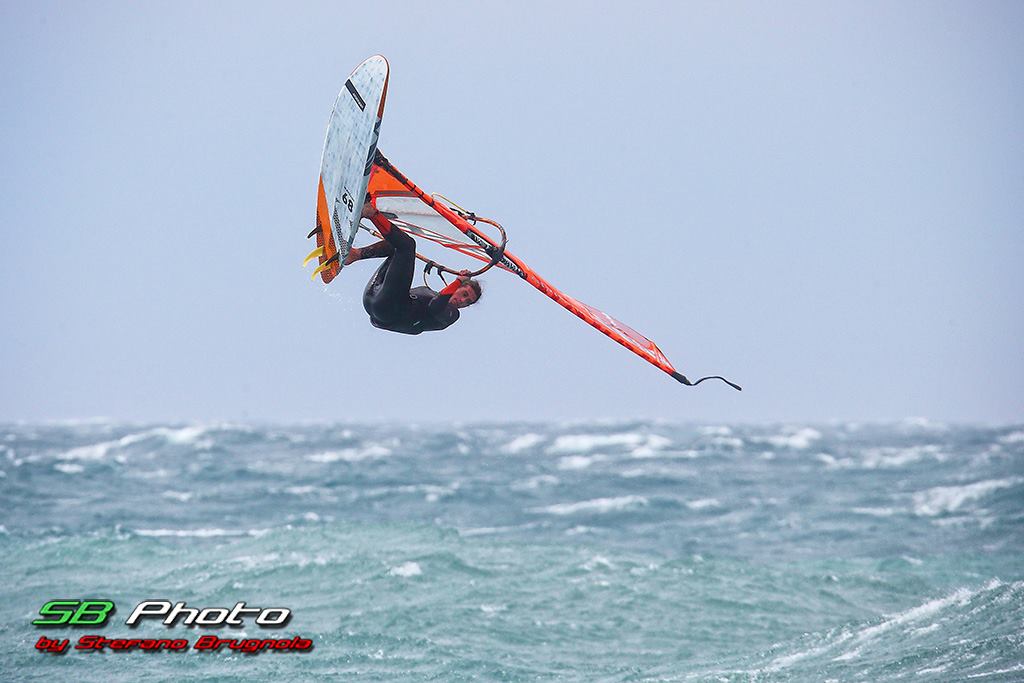 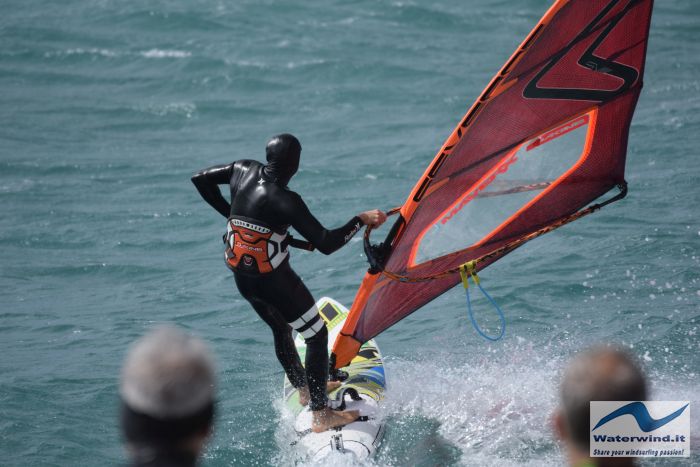 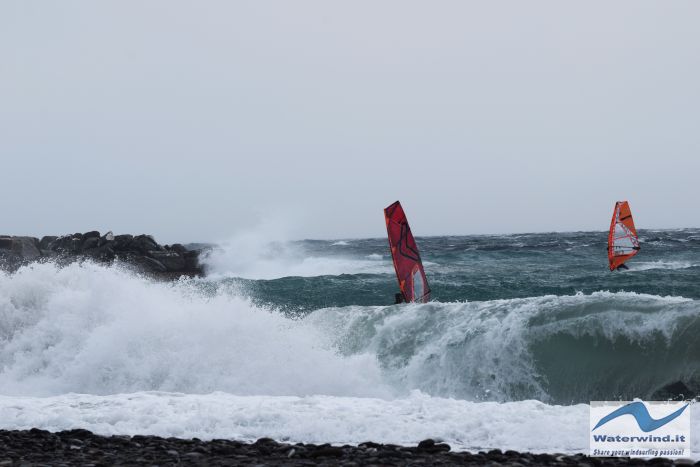 Since, in the late morning, the wind increases further (in the water we saw 3.4 sails....), we decide to move to other spots. We will get confirm that the wind here will remain very strong, throughout the central part of the day.

We go first to explore Arma di Taggia, and then La Rabina. At Arma, the wind has fallen down near the shore.

At La Rabina there are still about twenty knots, and some guys who have just finished the exit with 4.7, and say they had a lot of fun.

The wind seems unstable. But, anyway, we have a try with big equipment. It will not be a great session, so we soon put an end to the dances for the day.

Our week end, so, comes to an end. We have not been many hours in the water, but we have done experience, and known new places. Now, we should  go back to "school". A bit of Peler at Garda Lake, would not be a bad idea....

Click here, to enjoy the full high resolution slidegallery of the day of April 7, 2018.

Click here, to enjoy the full high resolution slidegallery of the day of April 8, 2018.

The video taken at Bordighera, on Sunday, 8th