On Sunday 10 september, we tried, for the first time, Marseille Le Prado with 25 knots from NW. The spot stroke us indeed, for glassy waves and sideon wind. Just a pity that there were too many wave surfers.

Water surface: 1,5 meters regular waves up to 100 meters from the shore; more than 2 meters waves, not breaking, offshore.

Board: Fanatic Triwave TE 86 2013 with a thruster fin set 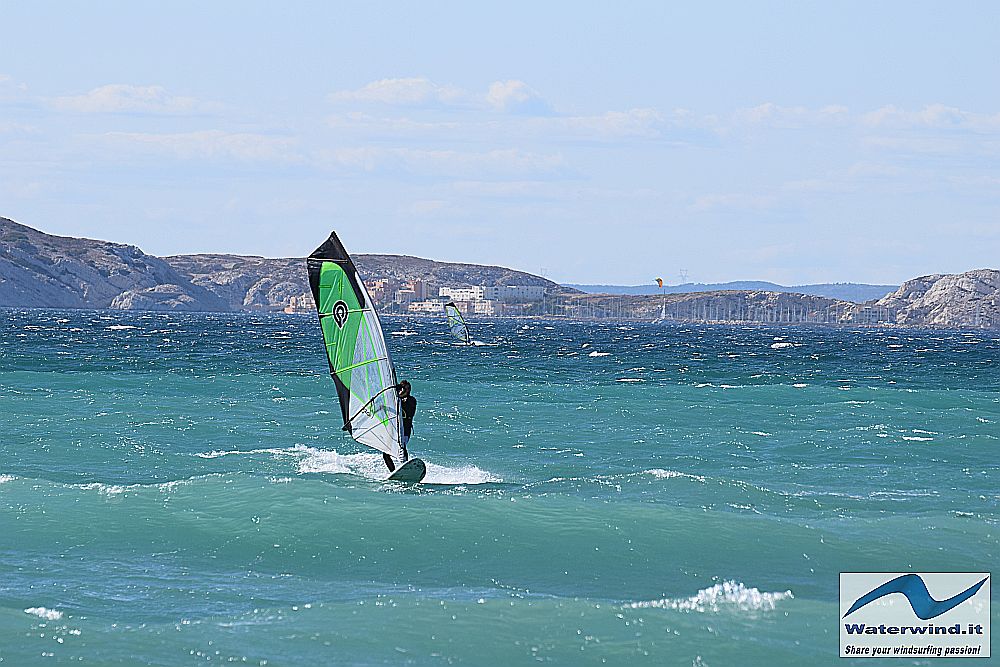 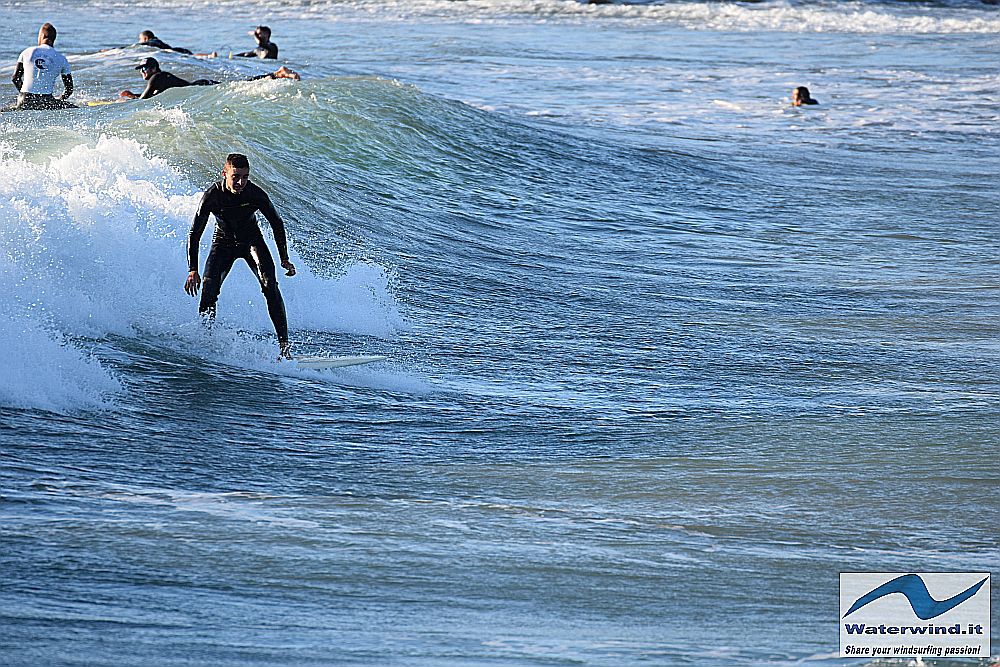 On Sunday morning, we saw a change in wind forecasts, with a sharp rotation of the wind from NW. So, after waiting in vain for a while at Coudouliere (Six Four), where, then, the wind will begin to blow at 25 kts only in the late afternoon, at about 13:00, we decided to go and see the spots more to the West. 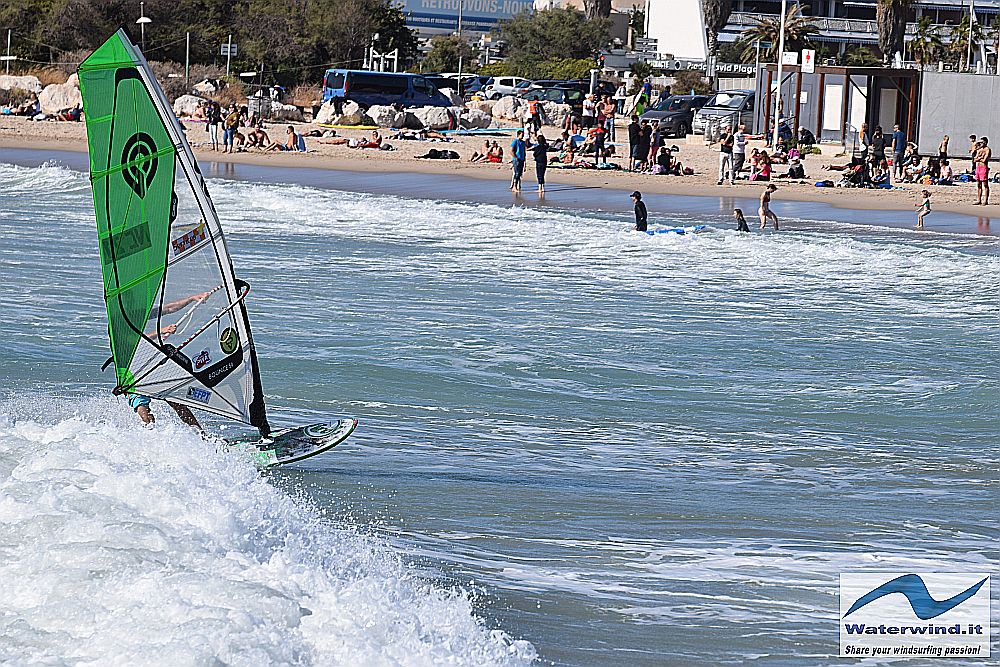 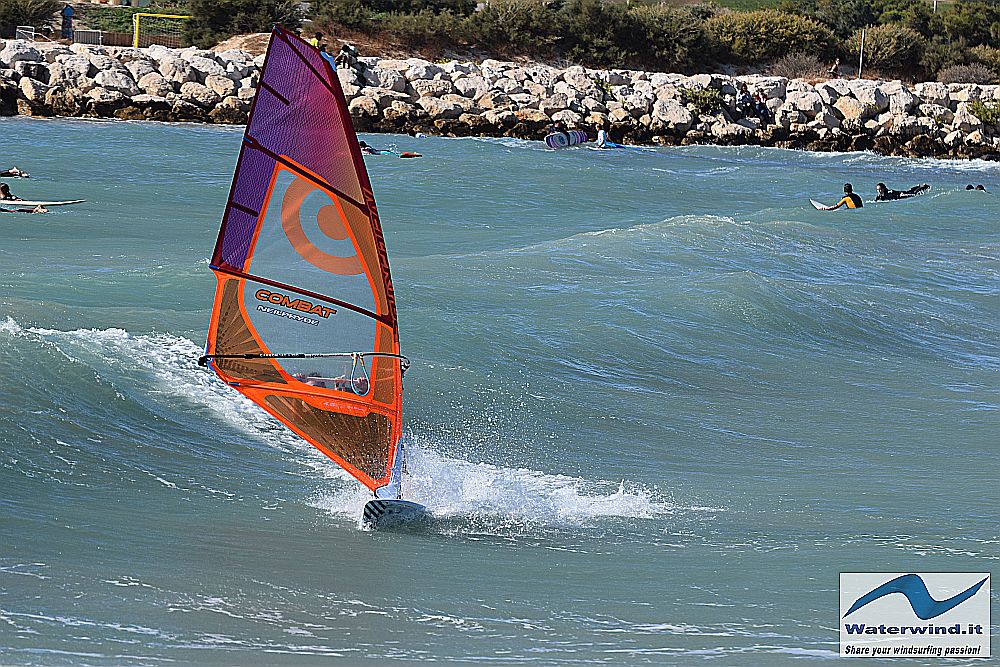 Driving in the South direction, after a while, an heavenly scene appeared to us: in a magnificent sunny day, with 25 Celsius degrees, suddenly we saw a wide emerald bay, under a blue sky, between two cliffs, in which some twenty windsurfers were riding 1,5 meters glassy waves. Bottom turns and cutbacks all the time. Moreover, we, immediately, found a parking place close to the spot, and while parking, through the windshield I got the picture of a couple of guys who were making  a forward ..... I got off the car, I admired the show, and I thought that it would have been a memorable day, and that I finally found a Mediterranean spot that I dreamt of long ago, with smooth waves and side wind. 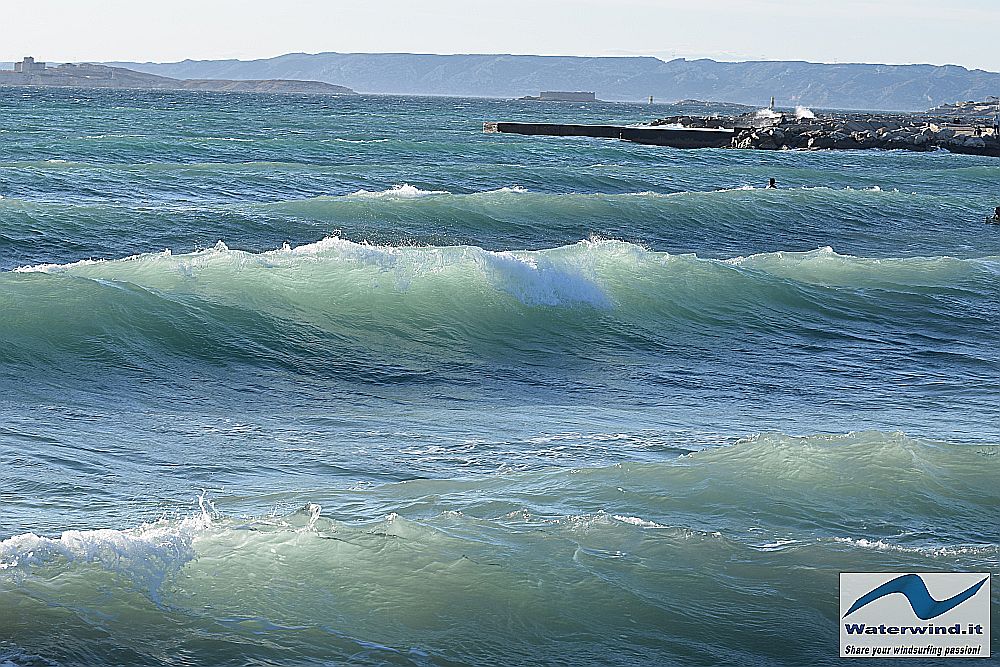 The bay was also full of wavesurfers, but they occupied only the upwind area. In the downwind area, a dozen windsurfers were riding and it seemd that they were enjoying very much. With anemometer, on the reef, I measured 22 kts as average, and up to 28 in gusts. I prepared the 4,7 and my Fanatic Triwave (my friend Michele went for a Starboard Kode 77, and a Goya Banzai 4,0). Meanwhile, our friend Andrea called me on the phone and informed of his "war plan": he was reaching us, for 3 days in France, and then he would have left from Toulon to Sardinia for a week .....

At around 15.15, we entered into the water. The entrance was less banal than expected, first because of our lack of knowledge of the spot; secondly, because the wind had become unstable under the shore (but also offshore, it was a little bit erratic), and in the meantime, many wave surfers had arrived, and now they occupied the area downwind of the bay, too.

The waves that came to us on our way to offshore sea were not high but steep, and if you did not get some gusts, staying balanced on the 86 baord, with low wind, was a magician game. Anyway, after a few attempts, I left the foams area, where, and I found myself off. 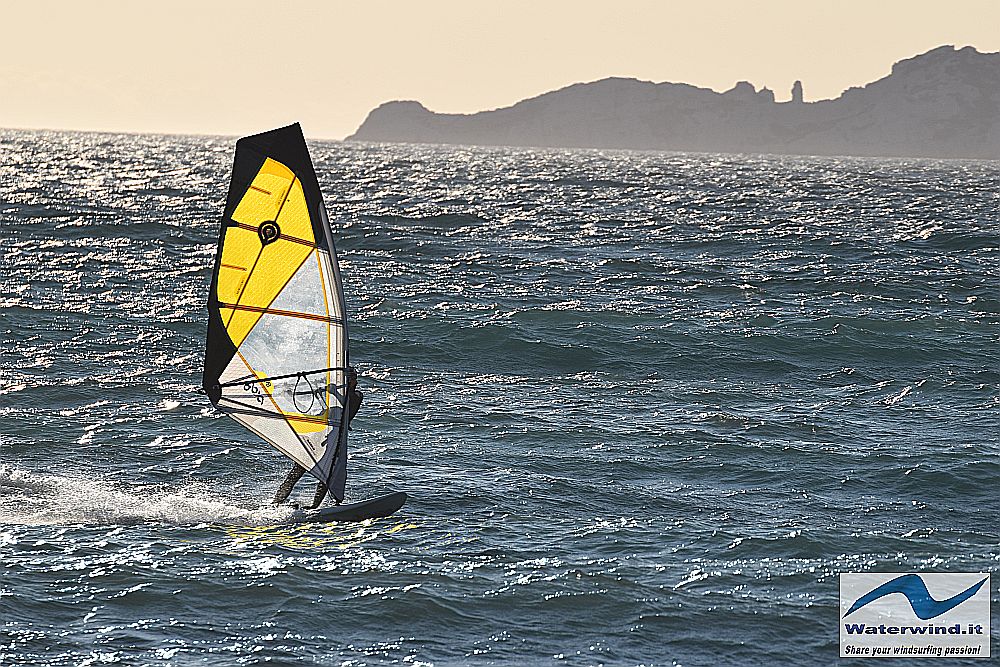 In the first rides, we explored the spot area. Big 3-meters waves were often met in the bay during our sailing. There were lulls and even change of wind direction, which required a bit of cunning and attention to get and keep planing. Sometimes, you had to ride down from one of these waves to help planing to begin. Downwind there were several remote cliffs, but they were far enough away. You just had to be careful not to follow some wind direction changes that would have led just on those cliffs.

Downwind, lots of windsurfers were also riding at Marseille Pointe Rouge (another Marseille spot). By exchanging some mails with the Local rider Pascal Frey of My Wind Session, I will discover, in the days after, that downwind there was also the spot of Les Glissant, where the wind is a bit more stable and where you also start and ride with side wind (you enter in the water from the docking slope near the harbor). Another spot to try.

After some riding offshore, even to gain water upwind, I decided to go to the shore for some waveriding. The first attempt went wrong, because just when I began to reach the waves, I got a lull, and so decided to go offshore again. The second time went better, though I had to use some experience. I reached the waves zone without planing and without having my feet in the straps; I began to descend from a beautiful big smooth wave, and as I began surfing, I put my front foot in the front strap, and immediately I inserted also the back foot. Fantastic! I found myself riding the waves of the Prado, though, I could not bear too much, and do some bottoms and cut backs, as I was surrounded by wave surfers, and I did not pretend to do like some local windsurfers who arrived at full speed in the area of ​​the surfers, and ran the risk of doing "strike" .... After some other rides offshore, I went back to the shore to rest. 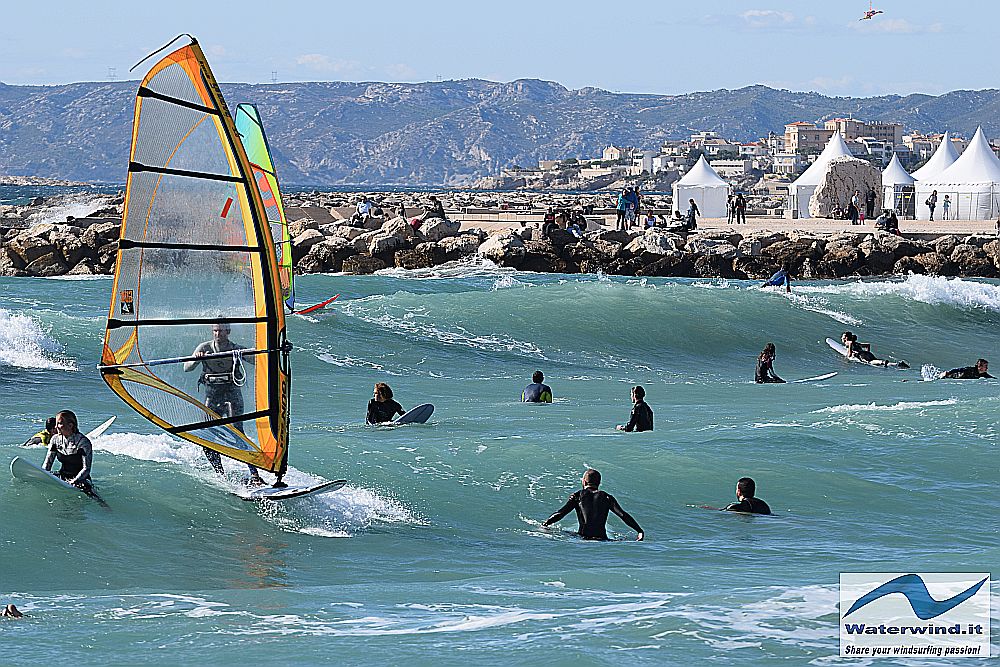 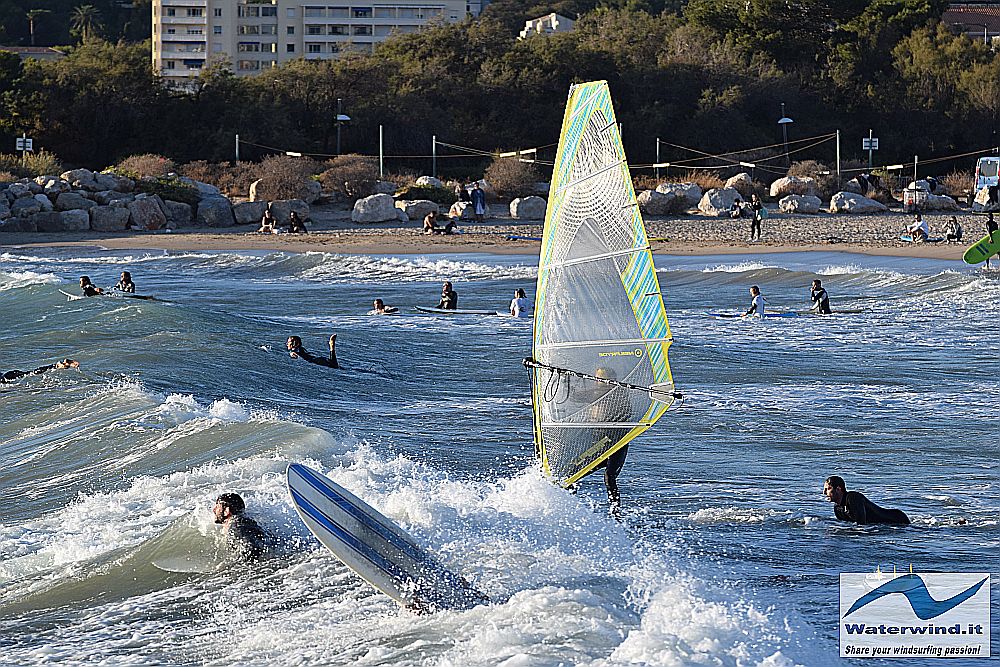 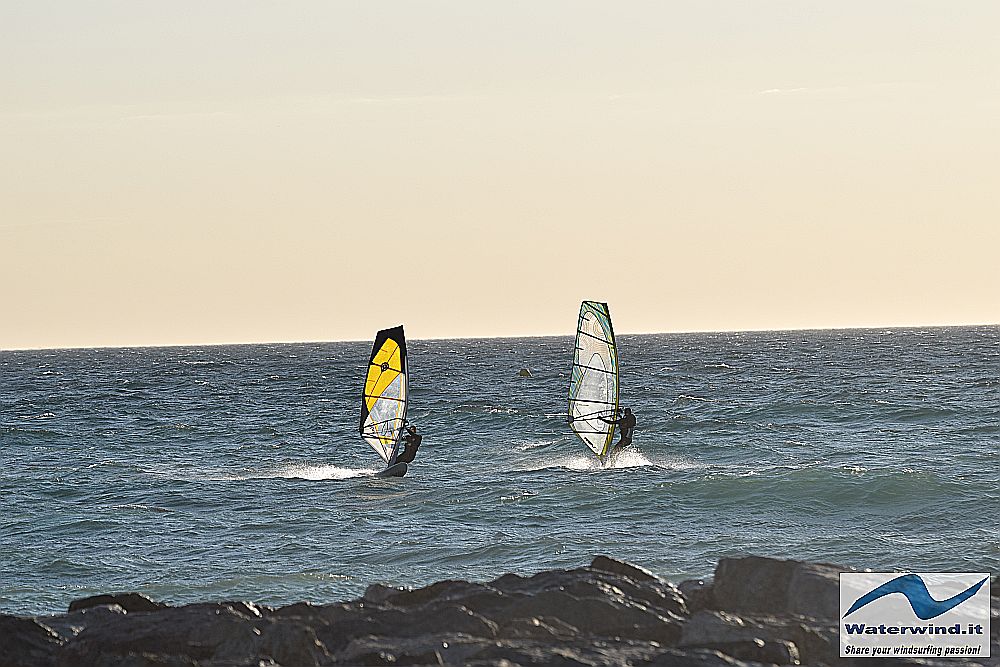 After a while, Michele also went in. While we were on the beach, Andrea joined us for, as he often does, a riding in the sunset ..... The second part of the session began right away with a good start from the the beach. I must say, however, that the wind offshore, was not very good, and you often happened to alternate floating on the board, and some good planing. When I definitely went out of the water, Andrea entered and started his own battle with wave surfers. At some point, I saw him while he had finally overcome the initial shorebreak, but he had to face a dozen wave surfers who had just taken the wave in front of him. Obviously, he had no chance but falling.

My friend Andrea and Michele will then stay in the water for another hour, giving me the chance to take some beautiful pictures at sunset. When it began to get dark, they went out of the water. Being late, for dinner we stayed in Marseille on the waterfront, and we ate at an Indian restaurant in the nearby. The next day we would have had a fabulous day at Coudouliere (read report).