Three of us left from Milan, on Sunday morning, at 7.30. We arrived to the spot around at 12.00. Since there were no places available to park along Boulevard Gazagnaire (near the main beach), we parked in the large car park at Cap de la Croisette (read also the full review of the spot, where we provide many more tips). 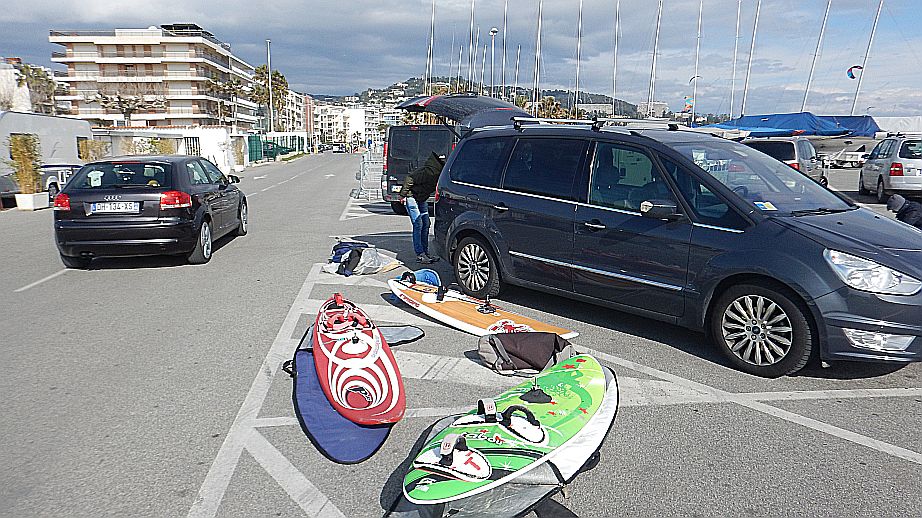 The spot was new, and little known, for us. So we spent some time to observe conditions and other riders. I did some measurements with an anemometer, noting a certain difference between the wind measured at Cap de la Croisette, and the wind measured at the north beach. At the Cap, the wind was constant, and around 25 knots as average, with gusts of 30-32 kts. Moving towards the beach to the north (along Boulevard Gazagnaire), the wind resulted lower, both as average and maximum intensity (as average intensity, just under 20); but, above all, it was more gusty. Obviously, we realized that in the sea it would have been even higher.

After some indecision, whether to go out with the 4.7 or not (I do not love to be underpowered, among the waves), chatting with my friend Michele, I opted for the Ezzy Tiger 4.2, to match with the Tabou 3s 86. It was definitely the right choice .... 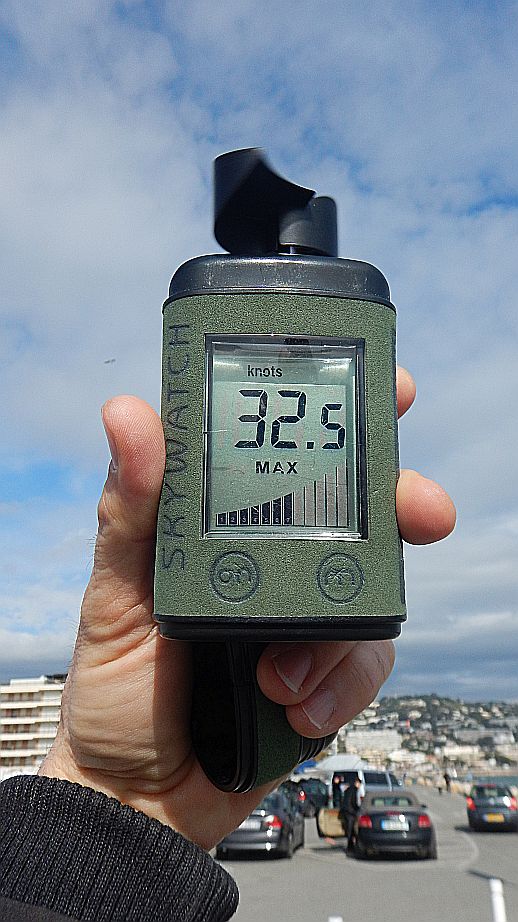 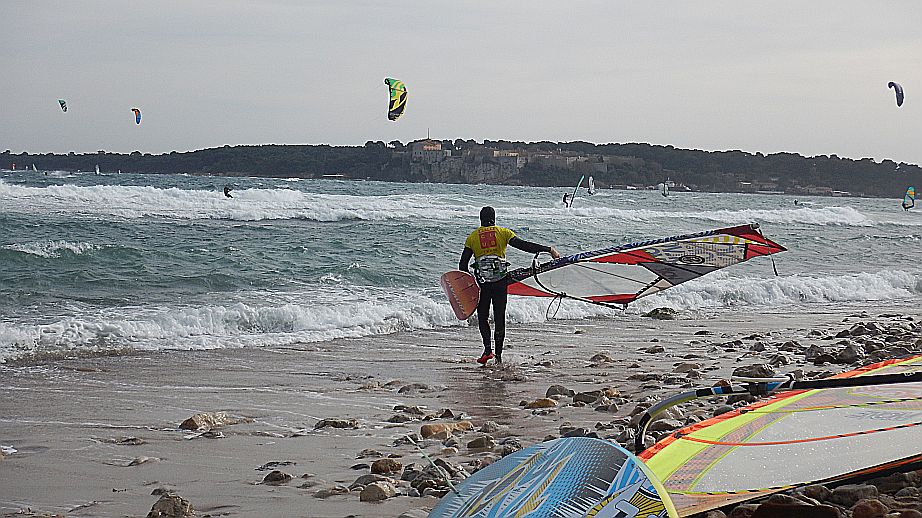 After looking at the other riders, we decided to start at a small beach near the parking lot, which was quite comfortable to begin our session. Sailing towards the Ile Sainte-Marguerite, in front of Cap de la Croisette, I was immediately impressed by the huge waves: they were pretty regular, not breaking (with some exceptions), but definitely steep, and approximately 3 meters high. Sailing towards the island is very picturesque, with a group of ocher stone houses on the background, surrounded by the Mediterranean maquis. 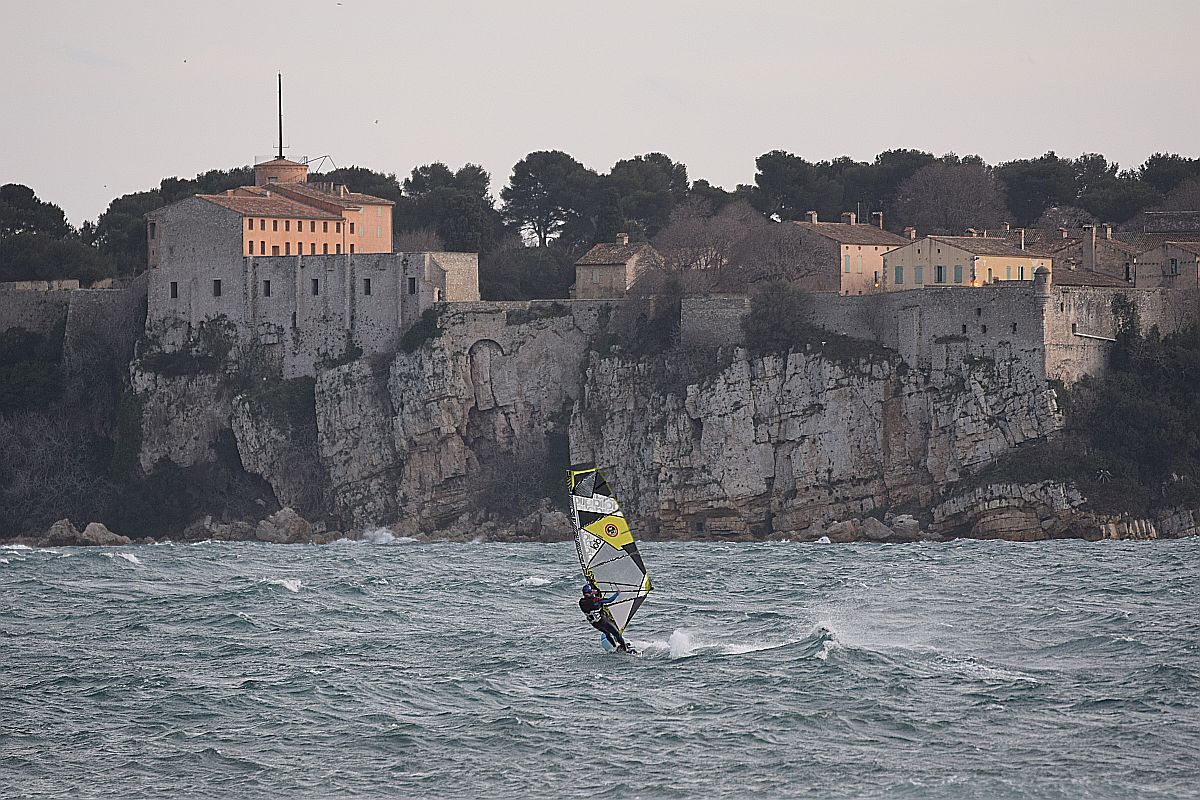 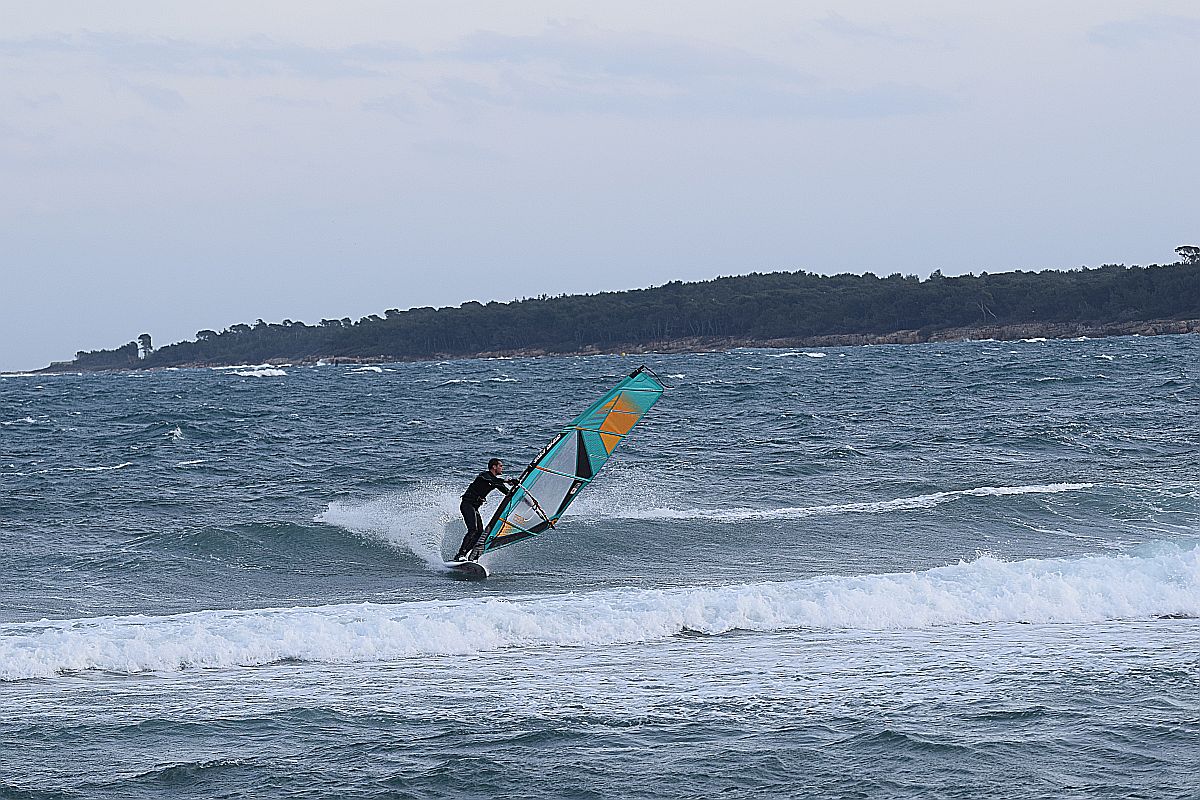 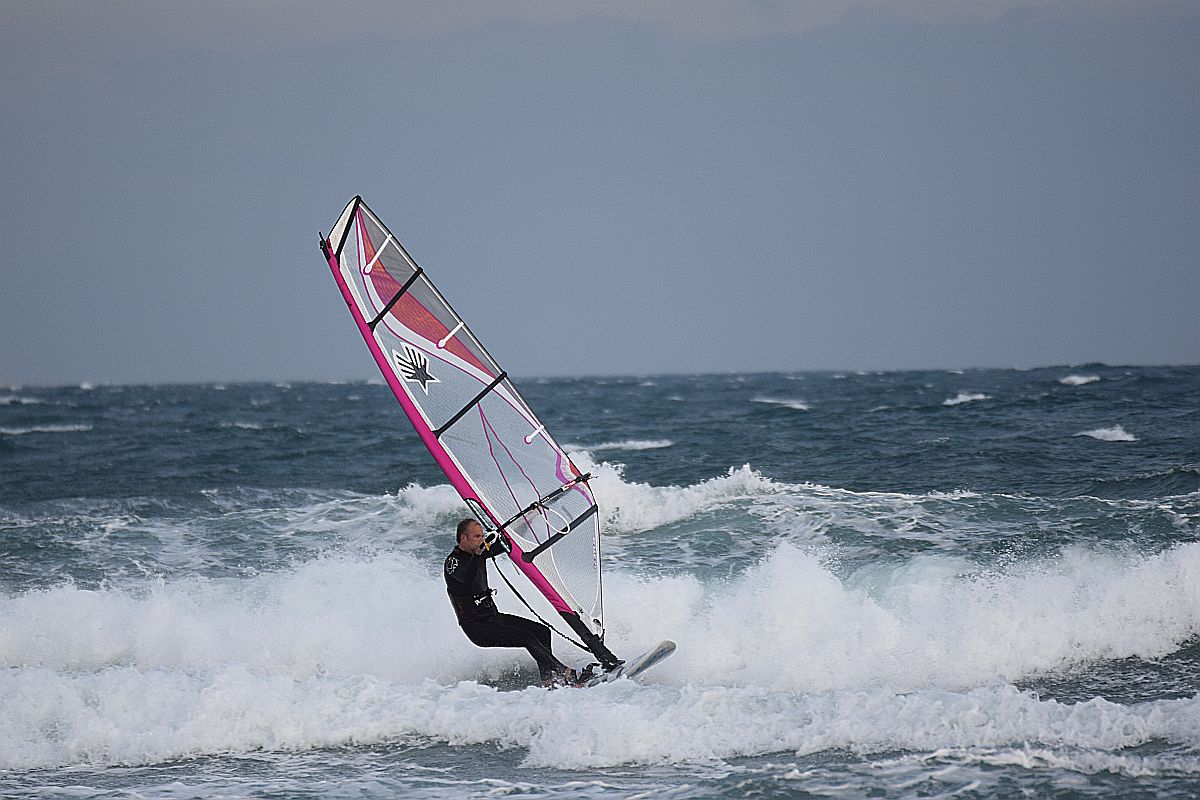 Then I began to ride on starboard tack towards the beach in front of Boulevard Gazagnaire. Moving towards that area, the wind tended to come from north east (while in the channel was from the East). That part of the spot is one of the areas where the best waves rise, 'cause they break on shallow water.

We stayed in the water since 13,00 to 16,00/16,30, with a few breaks. On Saturday, Cannes welcomed us with 15-16 Celsius degrees, and bit of sunshine, at least until early afternoon. I went out with 5 mm wetsuits, 6.5 mm surf shoes, neoprene cap and palm mittens. Many riders, however, were in the water barefoot and without gloves or hood. I envied especially those ones without shoes (what a pleasure to ride barefoot), but frankly for me it is still early, since the water is cold (about 14 degrees). 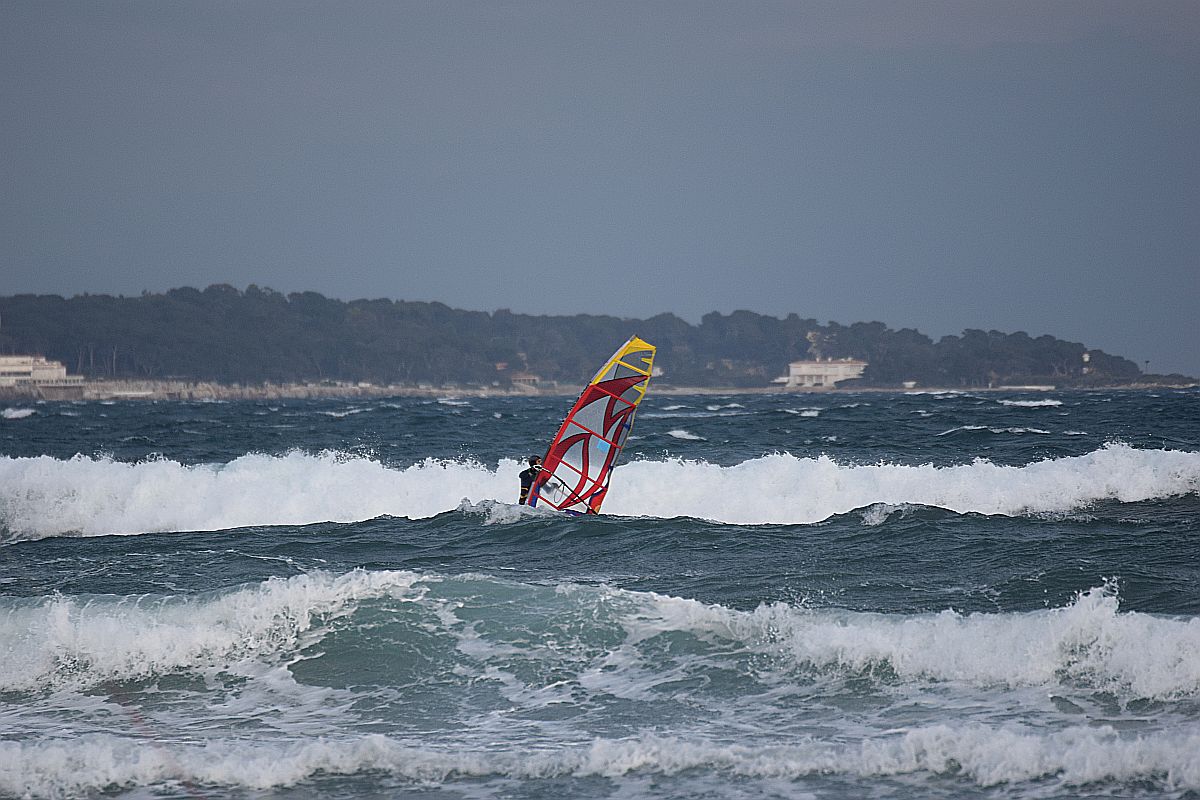 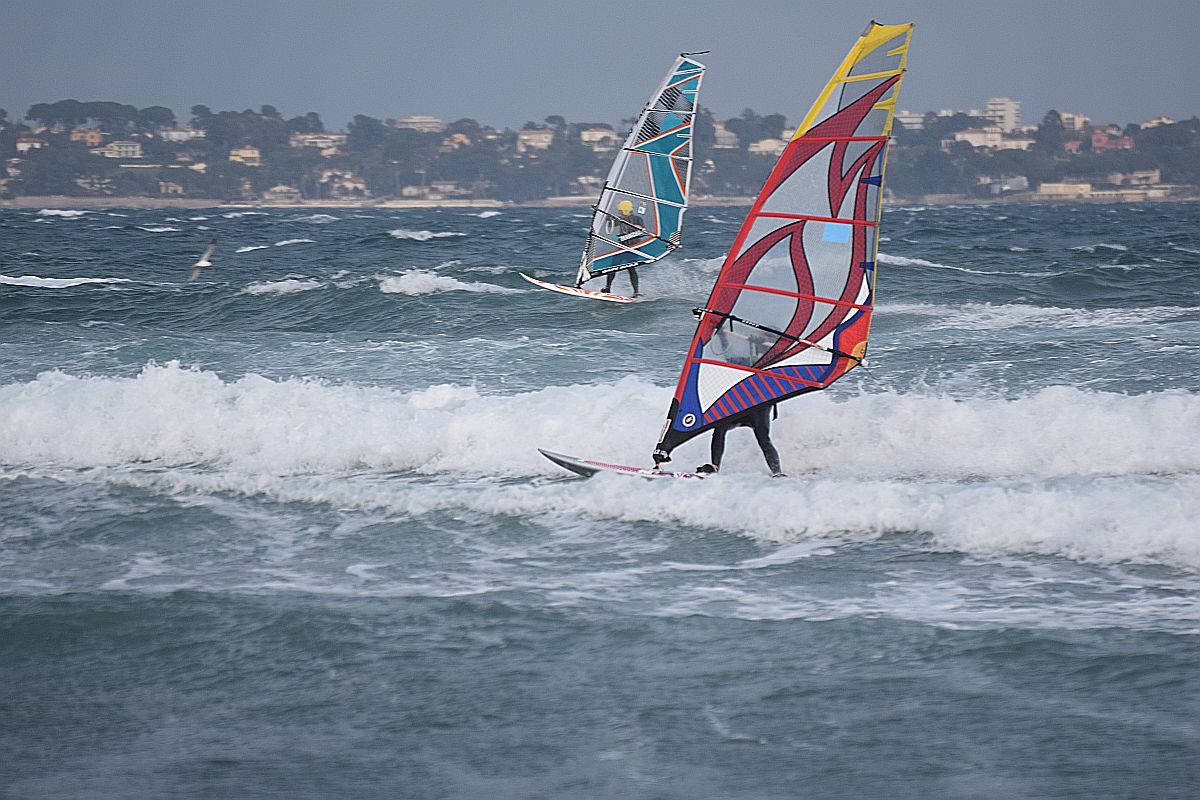 On Sunday afternoon, the spot resulted crowded; many local riders, and italians also present. Unfortunately, there was an ubiquitous presence of the Kiters, who have invaded the spot.

Immediately, I realized that, compared to Hyeres, which I continue to appreciate as well, Cannes is a spot where you can really ride waves, also front-side. Some readers will think that the wind direction is not sufficiently side with rispect to the wave. It may be true, but you can do some good waveriding anyway. 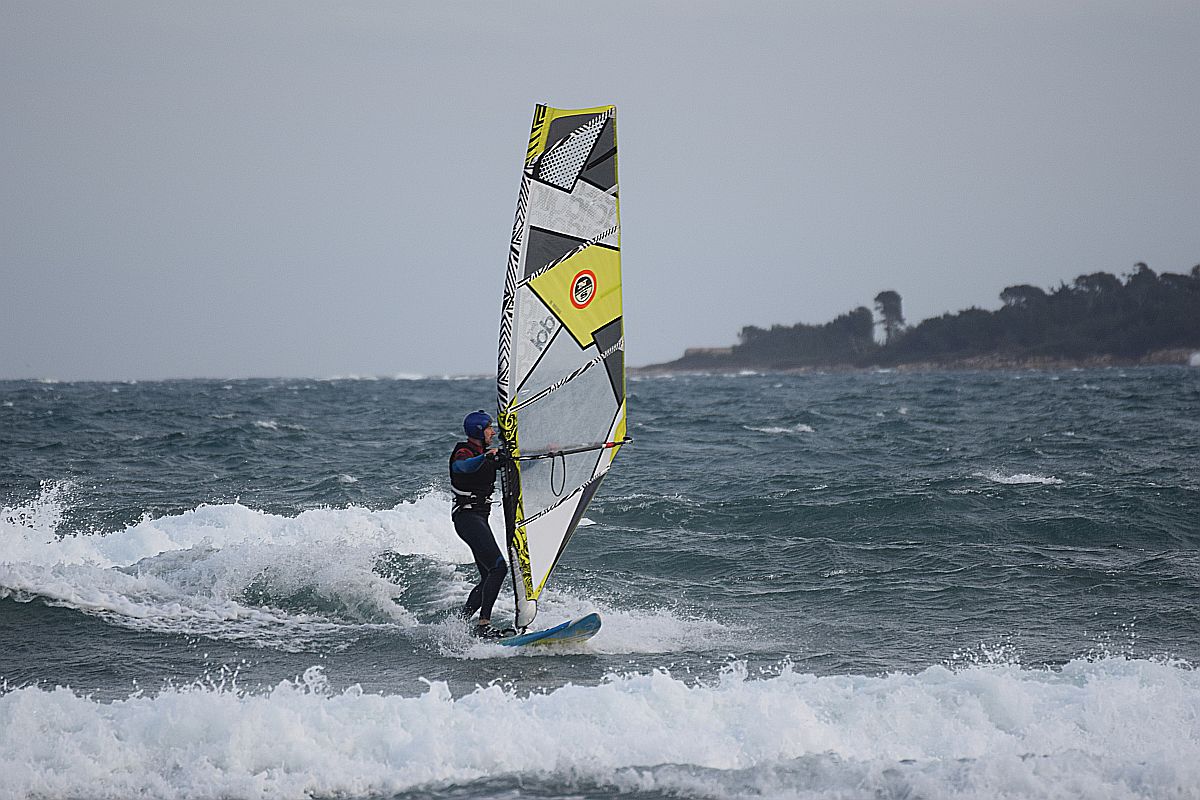 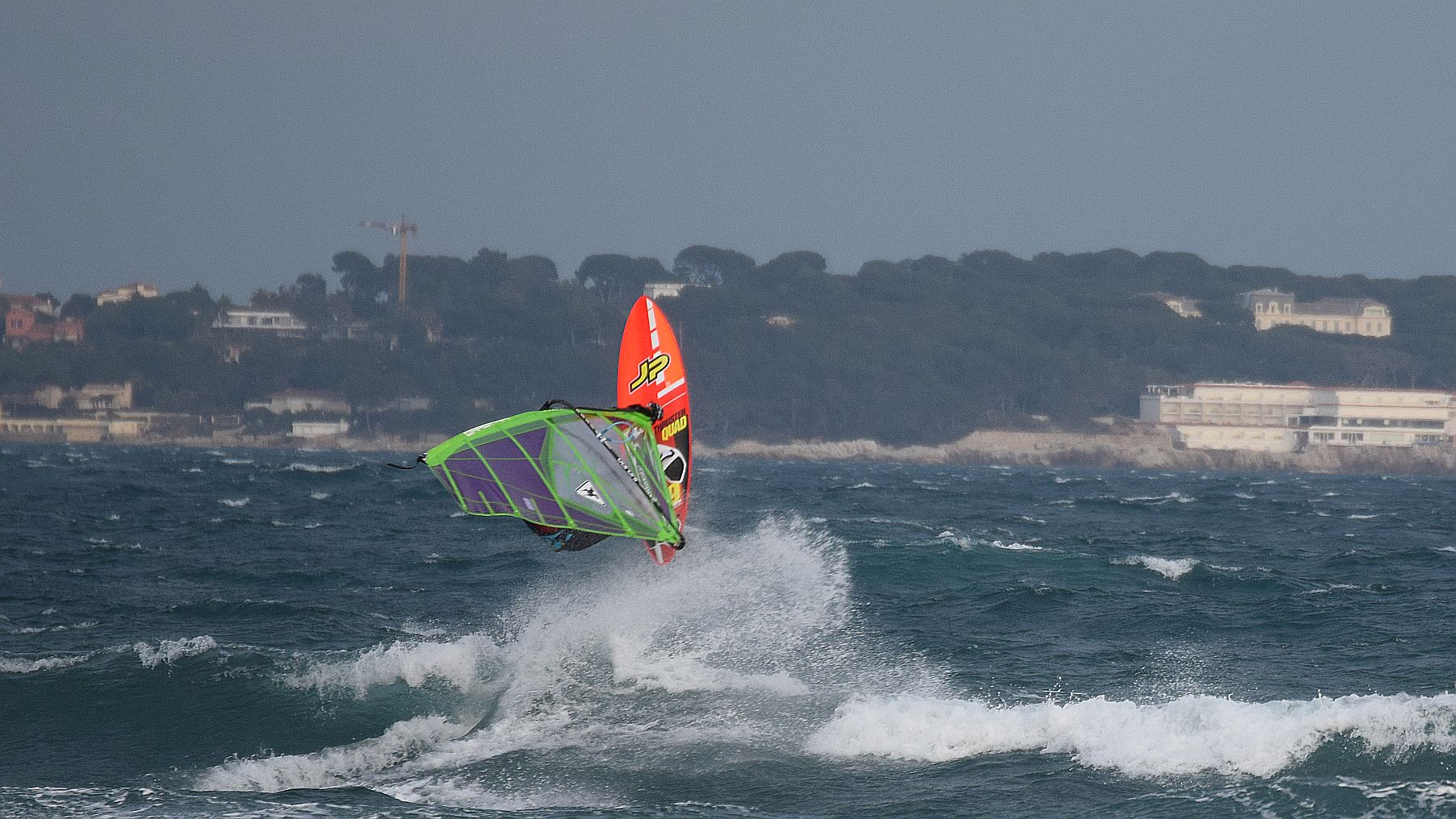 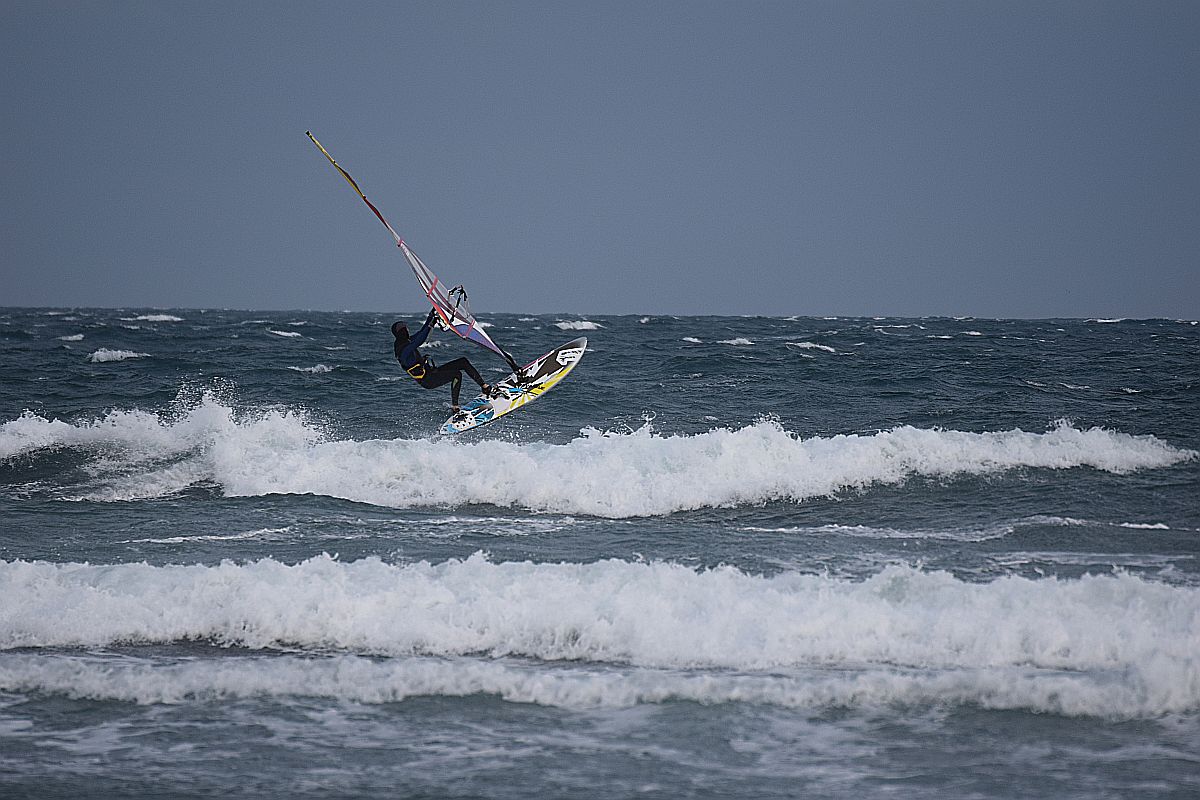 Weather forecasts for Monday were equal to those ones for Sunday (except for a greater cloud cover). After a hearty breakfast, we arrived to the spot at 10,00. 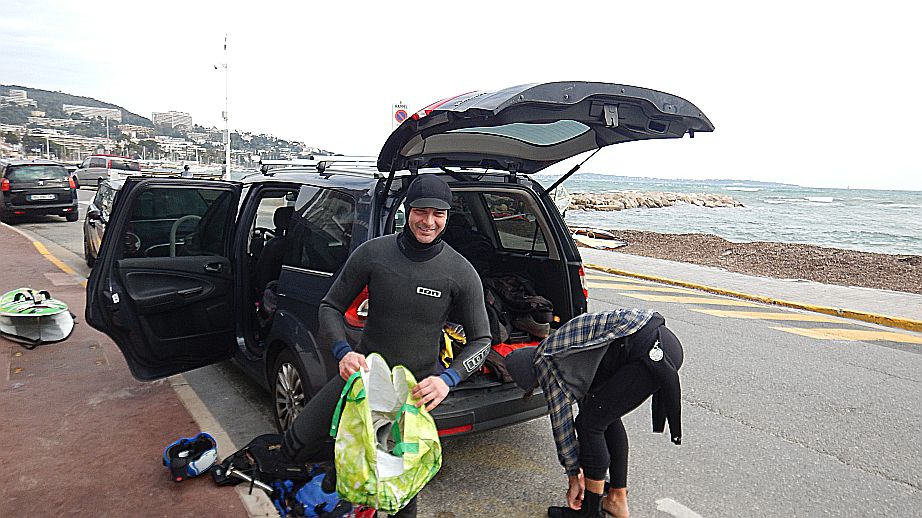 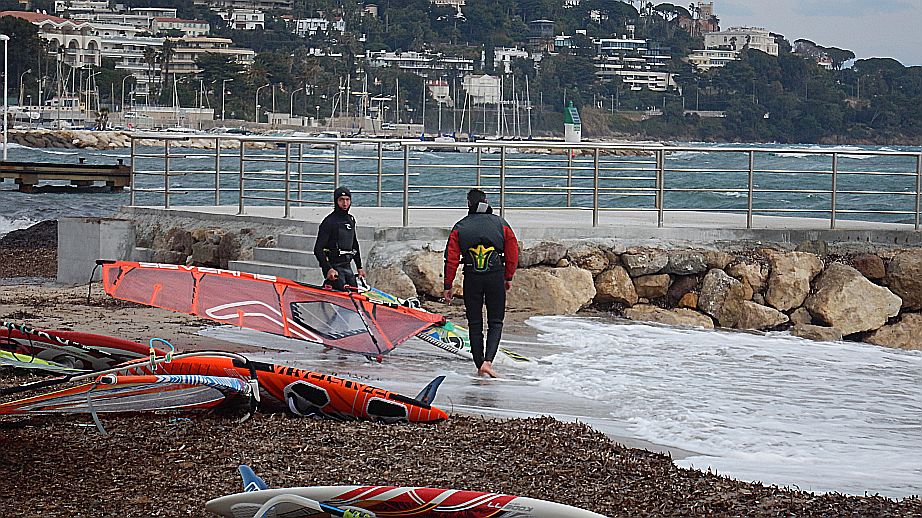 Anyway, in the first part of Monday's session, I enjoyed myself very much!!! The spot was not crowded, and there was plenty of water to ride where you wanted. 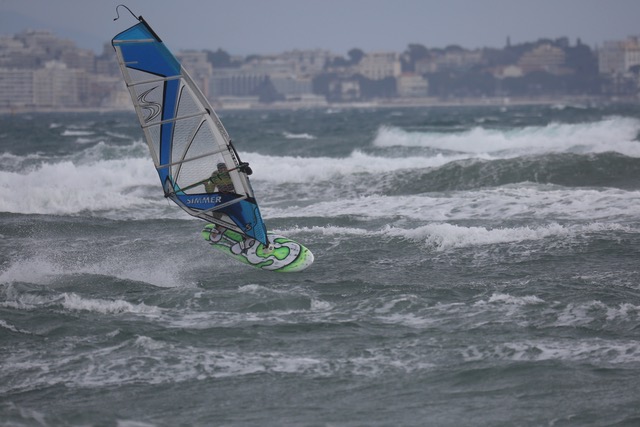 We started from the sandy beach near Avenue Reine Astrid. Riding in front of the parking lot of Cap de la Croisette, you meet some good waves. For the first time in my windsurfing career, I made some really high jumps (at least for me), of more than two meters. 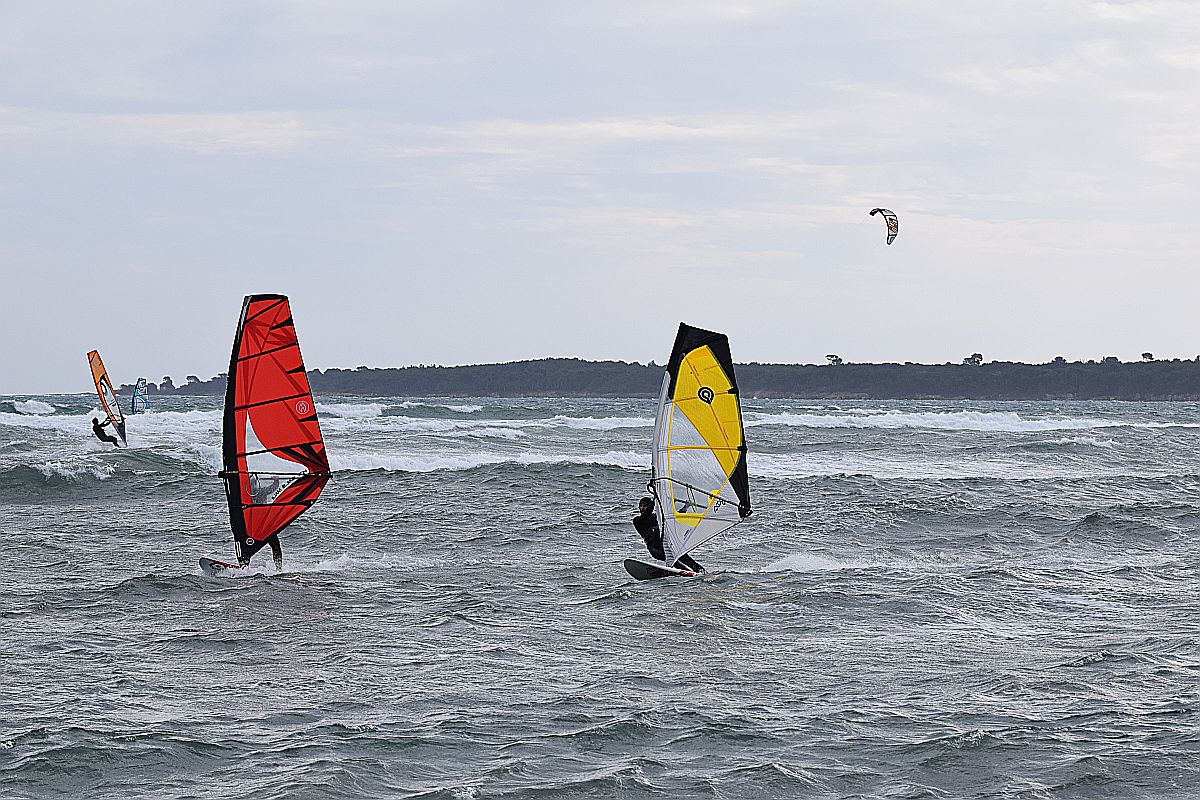 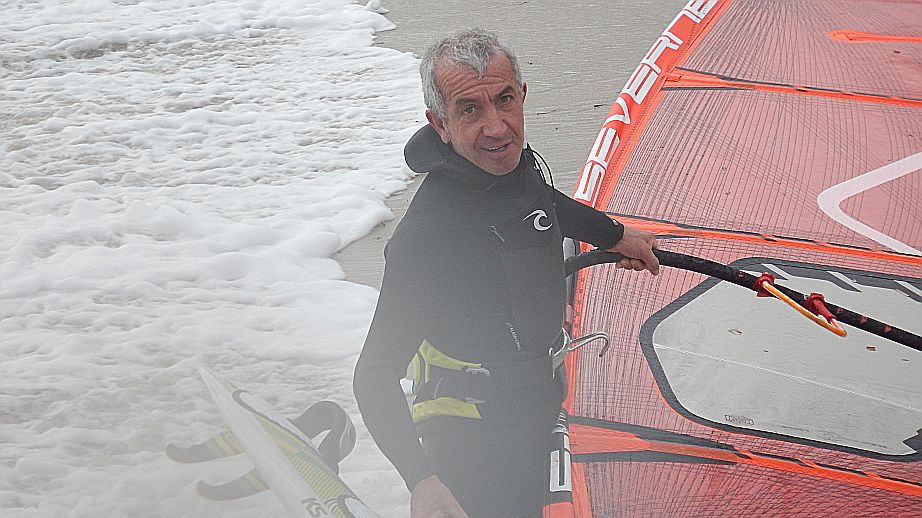 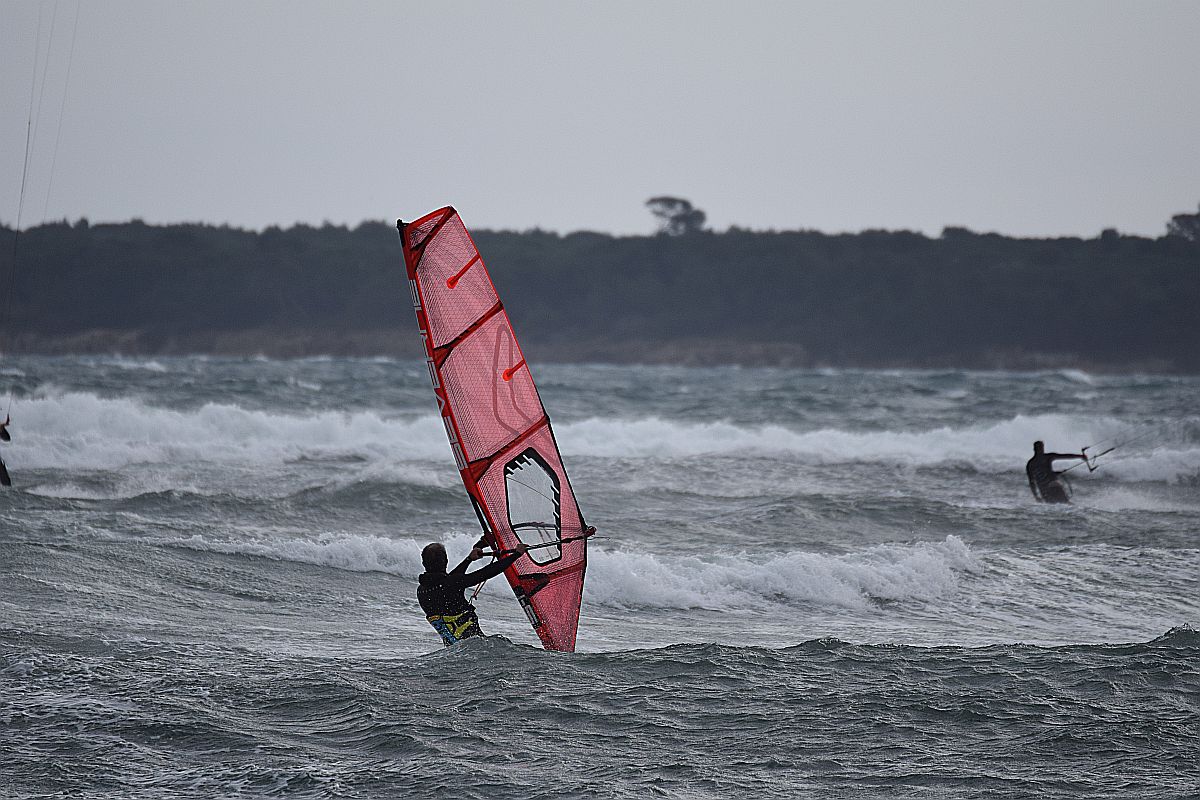 After a few mistakes while jumping, I remembered to keep the back leg straight, before landing on the water, to touch with the stern of the board first. I still have to improve a lot, but I tried some wonderful sensations. That part of the spot in front of the parking lot was a real ongoing challenge. We also caught some nice wipes out ..... 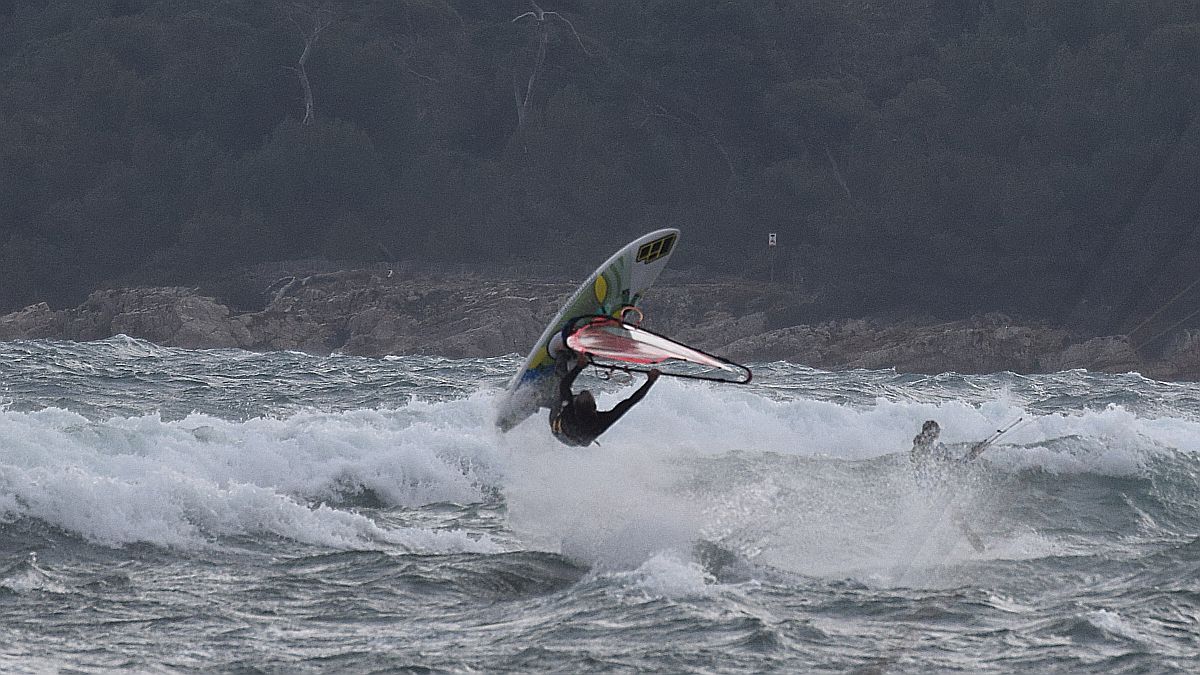 I also tried to ride waves in backside, unhooked from the harness, while riding back to the beach on straboard tack. Nice feeling, but I always arrived to the beach with little energy left to to set a jibe .... 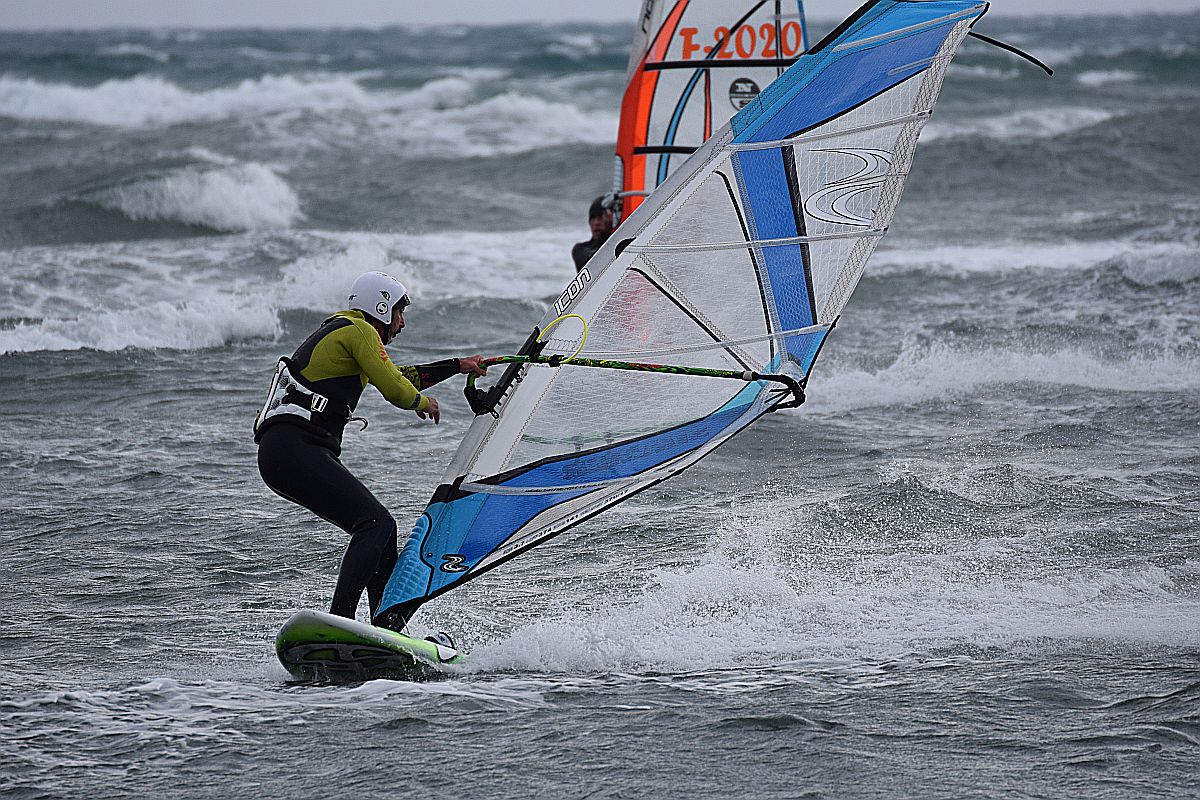 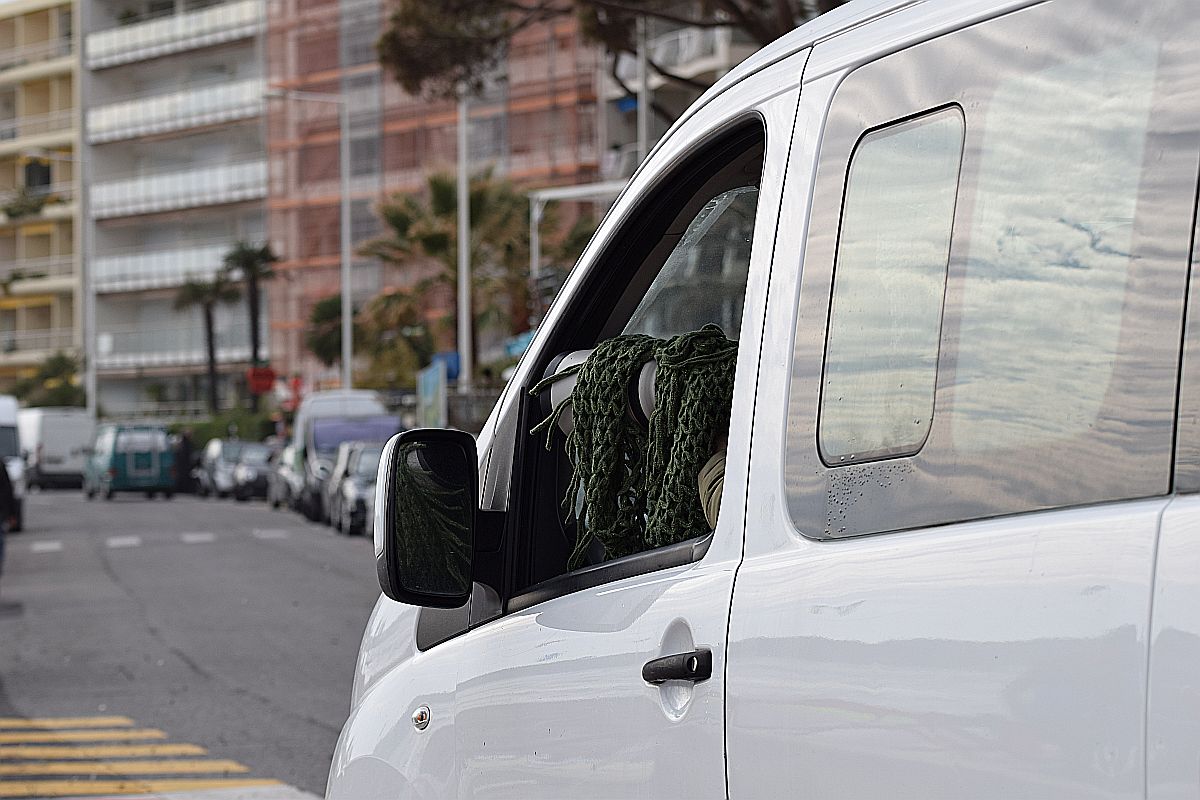 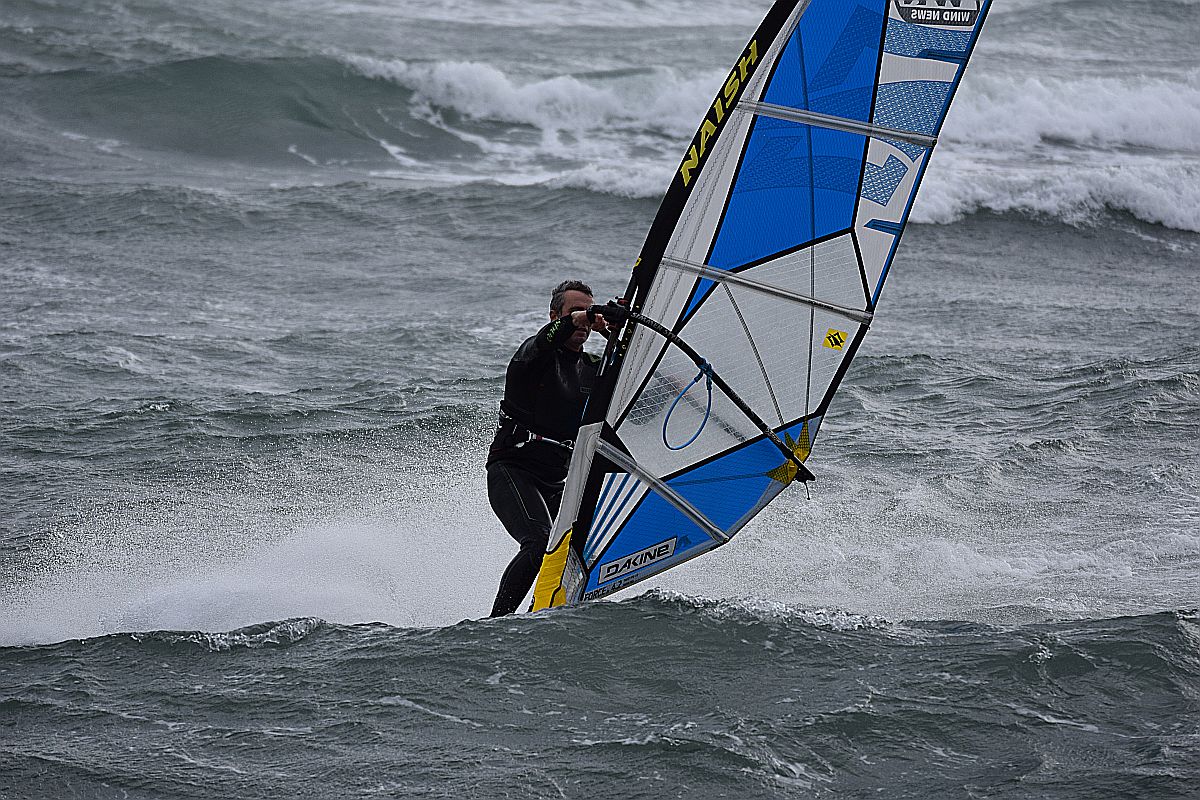 After taking some photos and videos, I came into the water again. I thought that on Monday, the spot would have been less crowded, and, instead, in the middle of the day, there were many people in the water. I also realized that the wind had strengthened a lot, especially in the channel, and the 4.2 was no longer manageable. So, I decided to close my session, also considering that it was almost time to prepare to go back home.

We still have to learn to get the most from of the spot, but, as overall, I have to say that the impression about Cannes is very positive.

Click here to enjoy the slidegallery taken with compact camera.

Click here to enjoy the slidegallery taken with the reflex camera.

The video of the two days