An excursion in Val Trupchun, in the heart of the Swiss National Park, in the Engadine, is a wonderful experience, especially in autumn. The charm and emotions of an almost uncontaminated environment, rich in fauna, together with the magic of the autumnal woods appearance, perhaps under the peaks whitened by the first snow, are the perfect setting for an unforgettable day. In this article, we describe the simple itinerary to explore this Swiss valley, with some advice.

An autumn trip to the Engadine is, for me, almost a fixed appointment: it is almost a crime to miss the spectacle that this valley offers in this period.

This time, I wanted to go and discover the Trupchun valley, in the Swiss National Park, combining the contemplation of the colorful appearance of the woods, set ablaze here and there by the larches in their autumnal livery, with the observation of the fauna, and in particular of the deers, which populate this valley. In fact, between the end of September and mid-October, the courtship of the females by the males takes place, and their mighty roars, as well as constituting a perfect soundtrack to the surrounding scenario, make their sighting a little easier. The Park is a very particular natural environment, where nature is left to itself, without human intervention.

Below in this article, in addition to the description of the itinerary, I will provide several tips to better enjoy the excursion.

It starts from the car park near the Prasüras Beizli restaurant (see our map below), at an altitude of 1680 metres. Do not park right in front of the restaurant (places reserved for customers), but in the large dirt clearing, on the opposite side of the paved road. If you can't find parking here, you can leave your car in the even larger car park at the "Parc Alpin" Adventure Park, or at the roadside, being careful not to obstruct the passage of vehicles. Keep in mind that Trupchun Valley is a rather popular destination for trekkers, and therefore the parking lots fill up rather easily. To get to the car parks, leave the valley floor road no. 27 to S-Chanf, and then follow the brown signs to the Swiss National Park.

From June to the end of October, a small yellow train from S-Chanf (see photo in our slidegallery) takes you first to Prasüras, and then to Parkhütte Varusch, from where the excursion can also begin. 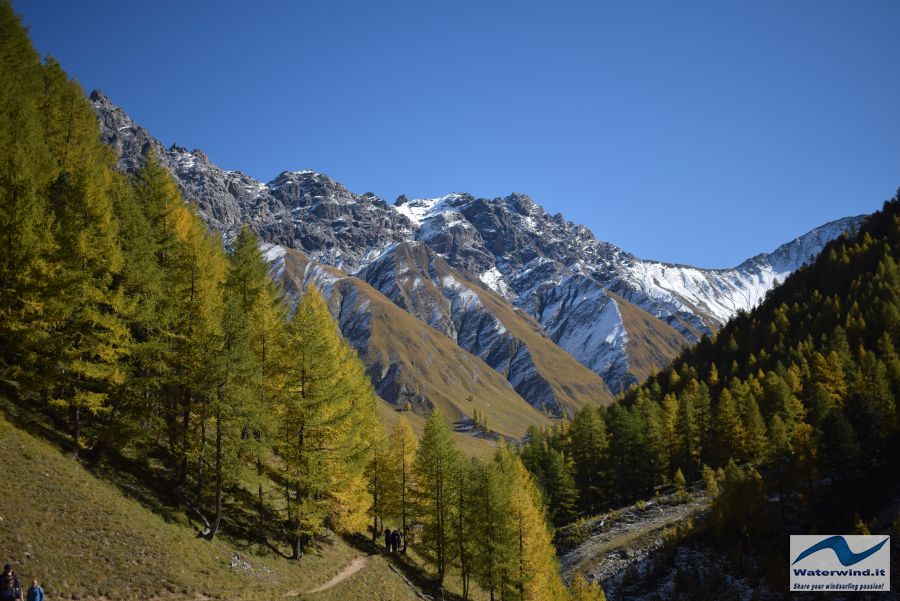 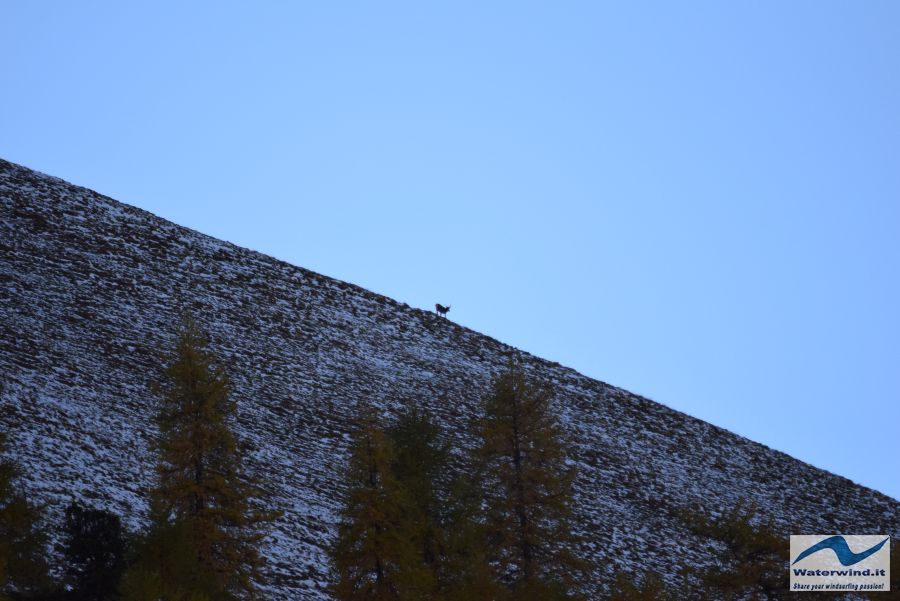 If you park in Prasüras, to start your walk, you can take the path that starts southwest of the restaurant, following the directions (see our outward trail), or you can continue along the road (limited traffic, from here), towards North, past the parking lot. In the first case, you will soon enter the wood to stay there for a good half hour, up to the bridge over the Ova da Varusch, just before the Parkhutte. The path is pleasant, with ups and downs, which makes you gain little altitude, up to the bridge over the stream at about 1720 metres above sea level. Consider that as it develops in the woods, and on the southern slope of the valley (left hydrographic bank), this path remains mostly in the shade, and, in the early morning, in autumn, the temperature can be low (even close to zero).

The road up to Parkhütte Varusch, on the other hand, follows the right hydrographic bank of the Ova da Varusch, and remains mainly in the sun. It also passes by some valuable rural buildings (Mulins).

After the Parkhutte, the road gives way to the path. From here, a gradual and constant climb begins without excessive gradients, up to Alp Purcher and the entrance to Val Muschauns. The latter valley represents, at least in its initial part, a valid alternative route to Alp Trupchun, presenting a valley floor with various meadows which, given the north-south exposure of the valley, remain sunny in the central hours of the day. The head of this valley, on the other hand, is crossed by itineraries already of a mountaineering level.

The route up to here has already allowed you to admire some valuable views. But the best is yet to come..... At the entrance to the Val Muschauns, turn sharply right, following the signs for Alp Trupchun, and start climbing a steep section of the route (to tell the truth, practically the unique), which from 1860 meters will take you to the 2040 meters of the Alpe. But the scenery around you will soon become more and more spectacular, and will amply repay you for the effort.

Already the path that leads to the Alpe alternates very suggestive stretches, in small clearings, or on steep slopes, surrounded by groups or individual larches brightly coloured in yellow, which stand out against the dark green of the stone pines or spruces; or stretches inside the wood, which are brighter and characterized by warm colors, if with a prevalence of larch trees, or which are more shady and dark, if with a prevalence of evergreen conifers. But progressively the majestic scenery of the upper Val Trupchun will appear more and more clearly: the moutain ridge crossed by the Fuorcla Trupchun (Livigno is just beyond), in the background to the East, or the rocky peaks, with an almost Dolomitic look, and which culminate in Piz Saliente, towards the North East. 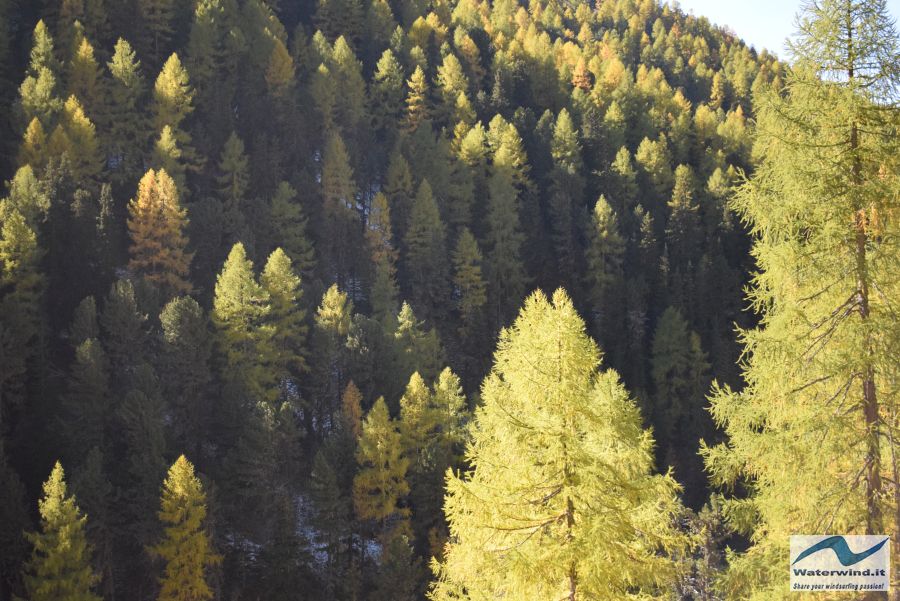 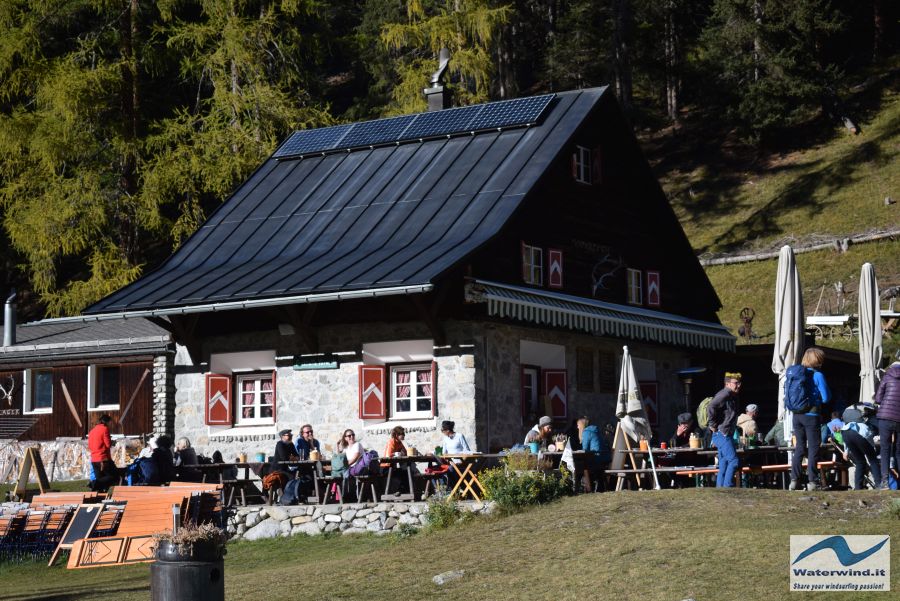 These first glimpses are an anticipation of the complete scenery that you can admire from Alp Trupchun, which is completed with the high grassy pastures, dotted with solitary trees, below the peaks described above. Once arrived at the Alpe, you have several meadows where you can sit for a picnic, or to position yourself to observe the animals. Remember the Park rules (see signs along the path), which forbid you to leave the marked paths. At the Alpe, you have a fountain to quench your thirst.

At the Alpe, as along the itinerary, we happened to meet several trekkers. This can drive animals away from the surrounding area. In the area, there are marmots, chamois, bearded vultures, eagles, and deers, in fact. But in the presence of many people it becomes more difficult to see the animals. To have a better chance of sighting, it is probably better to go up to the Alpe early in the morning, perhaps sleeping in the village at S-Chanf, at Parkhütte Varusch, so that you can start walking very early.

In any case, as demonstrated by the photos, even though I left in the middle of the morning, I had the thrill of spotting the deers, whose roars, coming from the southern and shaded side of the valley, suddenly broke the silence almost total of the place, silencing the more talkative trekkers.

In this regard, I strongly recommend that you bring good binoculars, and perhaps even a good camera with a telephoto lens.

The return to the car takes place through the same itinerary as the way up. For the outward track, consider just under two hours, at a slow pace. For the return, less than 1 hour and a half. The itinerary is also within the reach of families with children, and, of course, it is very enjoyable even in the height of summer.

Have a nice walk. Fabio Muriano

Click here for the complete slidegallery of the excursion.