After the big success of last year article, Carlo Piscitelli proposes, for the 2015 too, this valuable work with the results and the comments of 2015 boards and sails tests, from some of the most popular windsurfing magazines. We thank Carlo for the contribution and we give him the floor.

Here we are to boards and sails comparison, now for model year 2015. In order to better understand the purpose of this article, I would invite you to read the 2014 comparison, in particular the introduction. In a few words, the results of 3 different magazines (Windsurfing Jahrbuch, Planchemag and Windmag) are shown and analyzed, so you can have an idea the clearest and the most impartial possible of how 2015 boards and sails actually performs. 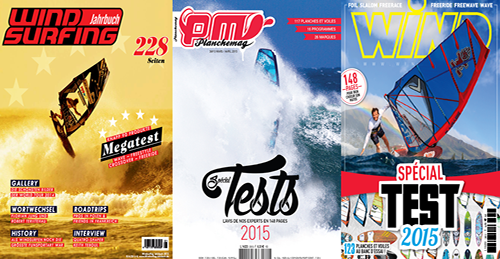 Unfortunately, we are greatly late with the publication of this article, as almost all 2016 material has been already unveiled. I promise I will be on time for 2016 material comparison.

As you can easily see, comparing this year results with 2014 tests, all the values at stake remain more or less the same. The winning boards and sails are, in many cases, the same.

SLALOM BOARDS: Tested in 2 magazines in different sizes (107-116 in one case, about 100 liters in the other one). We have the same results as for 2014, the winning board is the Starboard iSonic (107 and 97), with the highest score and the tester’s preference in both cases. Second place for the Tabou Manta that, with the same score of the Angulo Magnum, in third place, is one of the favorite of the testers  in one test.

FREERACE BOARDS: For this category we have two comparisons (sizes between 120 and 130 liters). Nothing new under the sun, the winner is the Tabou Speedster LTD (118 and 128 liters, highest score and testers’ choice in both tests). The RRD Firestorm V2 120 LTD gets the same score, but it was tested just in one magazine (this board has been just replaced by the V3 model, more race oriented and less user friendly than the V2). Third place for the Exocet S4 carbon 122.

FREERIDE BOARDS: Short, wide and thin boards are more and more protagonist of the market. Very good results, even for 2015, for the Fanatic Gecko (tested 112, 120 and 133), that gets two first places, one second and one third place, plus one testers’ choice. Good results for the Tabou Rocket (115, 125 and 135), more classic shaped freeride, getting one first place, two seconds and one third place, plus one testers’ choice (the Rocket Wide gets lower scores, even though it’s a new generation freeride board). Contentious results for the Starboard Atomiq, second place in two tests (both 110 liters) and in the last position in the third test (120).

FREESTYLE BOARDS: Only one test available. Same result as for 2014 test, Fanatic Skate TE 101 is the winner. Second place for the Starboard Flare and the Tabou Twister Team, with the same score.

FREEWAVE/FREEMOVE BOARDS: 4 tests available, 81 liters to 106 liters. The Tabou 3S remain the winner of this category (getting two victories in two different magazines for the 96 liters, one second and one fourth place for 86 and 106 liters, plus two testers’ choices). New entry for 2015, the RRD FSW gets two victories (in the same magazine but in two different categories, 86 and 106 liters) and one third place, but no testers’ choices. As for 2014, good results for the more wave oriented Fanatic Freewave, with one first place (96 liters), one second (106) and un third place (96), plus two testers’ choices.

WAVE BOARDS: 3 tests available, with a big size range, between 74 and 104 liters. We have a mixed picture in this category, in line with 2014 results. We have one different winner for each test (Starboard Quad 84, Fanatic Quad 76, and Starbaord Kode Wave 77). Both Starboard wave boards are present in the three tests and they always gets very good results (the Kode gets also two testers’ choice, the Quad gets one).

SLALOM SAILS: The results found for 2015 sails are slightly different from last year comparison. The overall winner is the Gaastra Vapor (7.1 and 7.9), with two victories and one testers’ choice. Second place for the  Loft Sails Racing Blade (size 7.0 and 7.8, one testers’ choice and total score very close to the Vapor) and third place for the Point-7 AC1 (7.2 and 7.9, sharing one victory with the Gaastra and one testers’ choice). Last year winner, the Neil Pryde RS Racing, is present only in one test (Evo 7, 7.8 square meter), it shows the same good qualities of the 2014 model, getting a very high score, even if lower than the Gaastra and the Loft.

FREERACE 2-3 CAMBER SAILS: two tests available, size between 7.5 and 8.0. Last year winner (Severne Overdrive) did not take part to this year tests. The sail with the highest score for 2015 is the Neil Pryde RS Slalom MK6 7.8, winner for one magazine and second for the other one.  The RS Slalom was not tested last year, for this reason we have no chance to compare this sail with the Severne Overdrive. Struggling for second place, the Gaastra Phantom 7.8 and the Point-7 AC-K 7.8, both of them winners in one magazine and, respectively, gaining the third and the fourth place in the other one. Good results for Loft Switch Blade  and KA Sails Koncept 7.5.

FREERIDE 2 CAMBER SAILS: One test for each of the magazines, 7.5 to 8.0 square meters. The overall winner is, without doubt, the Gun Sails Sunray (7.5 and 8.0), getting the first place in all tests. The Gaastra Cosmic (7.5 and 8.0) gets a slightly lower score than last year, even though it still gets the second place, considering the average score. Good results for the Neil Pryde Hornet (7.2 and 7.7) and for the North Sails S-type (7.3 and 7.8).

FREERACE/FREERIDE 0 CAMBER SAILS: 3 tests available,  6.5 to 7.0 square meters. More complicated results for 2015 than last year, there is not an overall winner. Good results , also in 2015 tests, for the Severne NCX 6.5 and 7.0 (one victory and two testers’ choice) and for the Loft Oxygen 6.8 (one first place and one choice). Third place for the Neil Pryde Hellcat 6.7 (winning one test).

CROSSOVER/FREERIDE ENTRY LEVEL/FREEWAVE SAILS: 4 tests, sizes 5.5 to 6.0. If we split in freeride sails and freewave sails, in entry level freeride category both the Neil Pryde Ryde 6.0 and the North Sails E-type 5.8 get a victory, while in freewave category the winner is the North Sails Volt 5.9 (two victories and one testers’ choice), second place for the Gun Sails Torro (one first place in 5.7 size, two second places in 6.0 and one choice).

WAVE SAILS: As usual, it’s the most populated category, 6 tests available, sizes 4.1 to 5.4, 3 to 5 battens. Even though it’s not easy to figure out which sail is the overall winner, we can notice the very good result of the Severne Blade Pro (two victories, 5.3 and 5.0 m2), but the similar Severne Blade standard gets just a fifth place. Very good results for the Goya Banzai 4.7, too, winning two tests. Not bad the Gaastra Poison (5.0 and 5.4) and the North Sails Hero (4.7 and 5.3), both of them getting one second and one third place.

Here below, you can find all tests results.

For any comment or question, please write a message at the end of this page.