How to choose a new board or a new sail? Only by their colors or by the discount we can get? The basic idea of this article is to find out which are the best boards and sails on the market, or the most suitable for everyone’s needs, in an objective way and comparing data from different sources.

Inside the small world of windsurfing, it is actually not easy to find complete, unbiased and reliable information. There are few specialised magazines and it is very infrequent to have comparisons with products from the same category, with exhaustive analysis and scores. But, with a little luck, we could find very good tests, furthermore from different sources. We have 3 different magazines (one from German, Windsurfing Jahrbuch, and two from France, Planchemag and Windmag), each one collecting the results of all 2014 windsurfing gear tests (boards and sails, divided by category). At the end, the average score of the three magazines will give us a final classification, so we will have a more clear idea for the next buying. If you want to read the same comparing of 2015 equipment, click here. 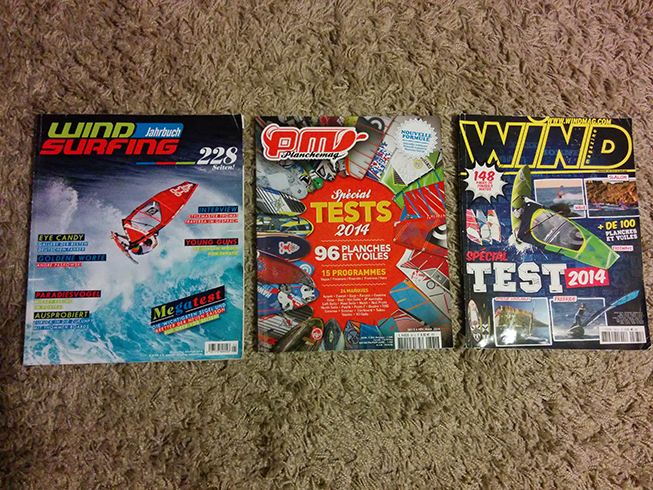 SLALOM BOARDS: We have tests just in two magazines, with slightly different sizes (107-110 liters for one test and 100 liters for the other). The result is univocal, the winning board is the Starboard iSonic (107 and 97). It gets the highest score and it is one of the favorite of the testers for both. Choice of the testers for one of the two magazines is also the RRD X-fire (PWA world champion 2014, rider Antoine Albeau), but its score is lower than the Exocet RS3/4 100 and 110, in the second place.

FREERACE BOARDS: These boards have been tested only by one magazine (volume 110 liters). Full victory (score and testers’ choice) for the Tabou Speedster 108. Second place for the Starboard Futura 111. The Futura seems to be easier and more exploitable than the French board, but it has lower overall performances.

FREERIDE BOARDS: The comparisons in this category are more complicated, due to the fact that at the moment there are two different types of boards: the more classical ones (i.e. Starboard Carve or JP X-cite ride) and the modern wide ones (i.e. Starboard AtomIQ or JP Magic Ride). Some says that in the future we will have more and more short, wide and thin freeride boards. But, up to now, the two types of freeride boards are still coexisting. Fanatic, for instance, is trying to find a merging between the two shapes. In fact, the 2015 Gecko will be a compromise (for the largest sizes) between the very wide 2014 Gecko and the classic shaped Shark (not to be produced anymore starting from 2015). In general, the most winning board is the Fanatic Gecko (120 and 105), overall winner in all the tests where it took part in (3 out of 6). At the second place we have the Tabou Rocket 125, 135 and 145 (in 4 tests the Tabou get two victories, one second place and one third place) and the Fanatic Shark 120 and 135 (one first place and one second place).

FREESTYLE BOARDS: One of the three magazine tested this type of boards. The winner is the Fanatic Skate TE 101 (PWA world champion 2014, rider Gollito Estredo). Second place for Fanatic Skate (standard edition) 100 and Starbaord Flare 101, very close in terms of score to the Skate TE.

FREEWAVE BOARDS: 4 tests available, volumes between 85 and 105 liters. The battle is between the Tabou 3S 86, 96 and 106 and the Fanatic Freewave (same sizes), with the 3S slightly ahead. The French board is in the first place in 3 tests out of 4, while the Fanatic gained one first and two second places. Analyzing the scores of these two boards, we can see their different personality: Tabou is easier and faster (an high wind freeride), Fanatic is more technical and wave oriented (an easy wave board).

WAVE BOARDS: Sizes between 75 and 95 liters. First place for the Fanatic Quad TE 82, winner of the two tests where this board was present in. Good result for the Starboard Kode 82 and 87 (former world champion, rider Philip Köster), with one first and one second place.

INFLATABLE WINDSUP: Tested on one of the three magazines. This kind of gear are now used as beginner boards by many windsurfing school and by some riders in non-planing conditions. The overall winner is without doubt the Starboard 10’0 De Luxe , second place for the Fanatic Fly Air Premium Touring 11’ X 32 with a much lower score.

SLALOM SAILS: We don’t have a clear victory in this catergory. Considering the sum of the points for the two tests of these sails, the winner seems to be the Neil Pryde RS Racing Evo 6 7.0 and 7.8 square meters (PWA world champion 2014, rider Antoine Albeau), one of the favorite of the testers for both the magazines. Second place for the Gaastra Vapor (7.1 and 7.9) and the Loft Sails Racing Blade (7.0 and 7.8), with the Loft slightly ahead, as it is one of the favorite of the testers for two magazines (the Gaastra is a testers’ choice just for one magazine).

FREERACE SAILS 2-3 CAMBERS: tested by two magazines, sizes between 7.7 and 8.2 meters. The Severne Overdrive 7.8 is the winner in both the tests, favorite of the testers for one. Second place for the Loft Sails Switch Blade 7.8 (one first and one third place, favorite of the testers for one magazine), third place very close for the North Sails Ram 7.8 (just half point below, testers’ choice for one magazine).

FREERIDE/FREERACE SAILS NO CAMBERS: Tested by all the three magazines, sizes between 6.4 and 7.3. Clear victory for the Severne NCX (6.5 and 7.0), gaining two first and one second place, favorite of the testers in all the tests. Second place for the Loft Sails Oxygen (6.8 and 7.3), with two second places and one testers’ choice.

CROSSOVER/FREEMOVE/FREEWAVE SAILS: Sizes 5.5 to 6.1. Battle between Ezzy Sails Legacy 5.8, Naish Vibe 5.5 (both winners in two different tests) and North Sails Volt (one first and one second place in two tests). Second place for the Gaastra Cross 6.0.

FREESTYLE SAILS: One test available, size 4.7-4.8. The winner is the North Sails Idol LTD 4.7 (PWA world champion, rider Gollito Estredo). Second place for the Gaastra Pure, the Severne Freek, the Gun Sails Beat, the Maui Sails Loco Pro and the Hot Sails Maui Freestyle Pro, all with the same score (very close to the Idol) and the same size, 4.8.

WAVE SAILS: Many sails tested and with different features. We have 3 batten sails (at the moment they seems to be very good especially for down the line surfing), 4 batten sails (probably the most common type for wavesailing) and 5 batten sails (very powerful sails, good choice for high wind freeriding, too). Sizes 4.5 to 5.4. The battle is between the North Sails Hero (4 battens, 5.0 and 5.3 tested) and the Gaastra Poison (5 battens, 5.0 and 5.4). They get the same score, but the North is the favorite of the testers. Second place for the Gun Sails Transwave (5 battens, 5.3 tested), just one point below the North and the Gaastra.