I immediately tell you that, after trying it, I sent a message to my friend Nicola (who suggested me this purchase) with the text "Declare Fabien Vollenweider Saint right now". In fact, it was clear to me, after the test, that the Tabou shaper is a genius, and when you buy a Tabou you don't go wrong. 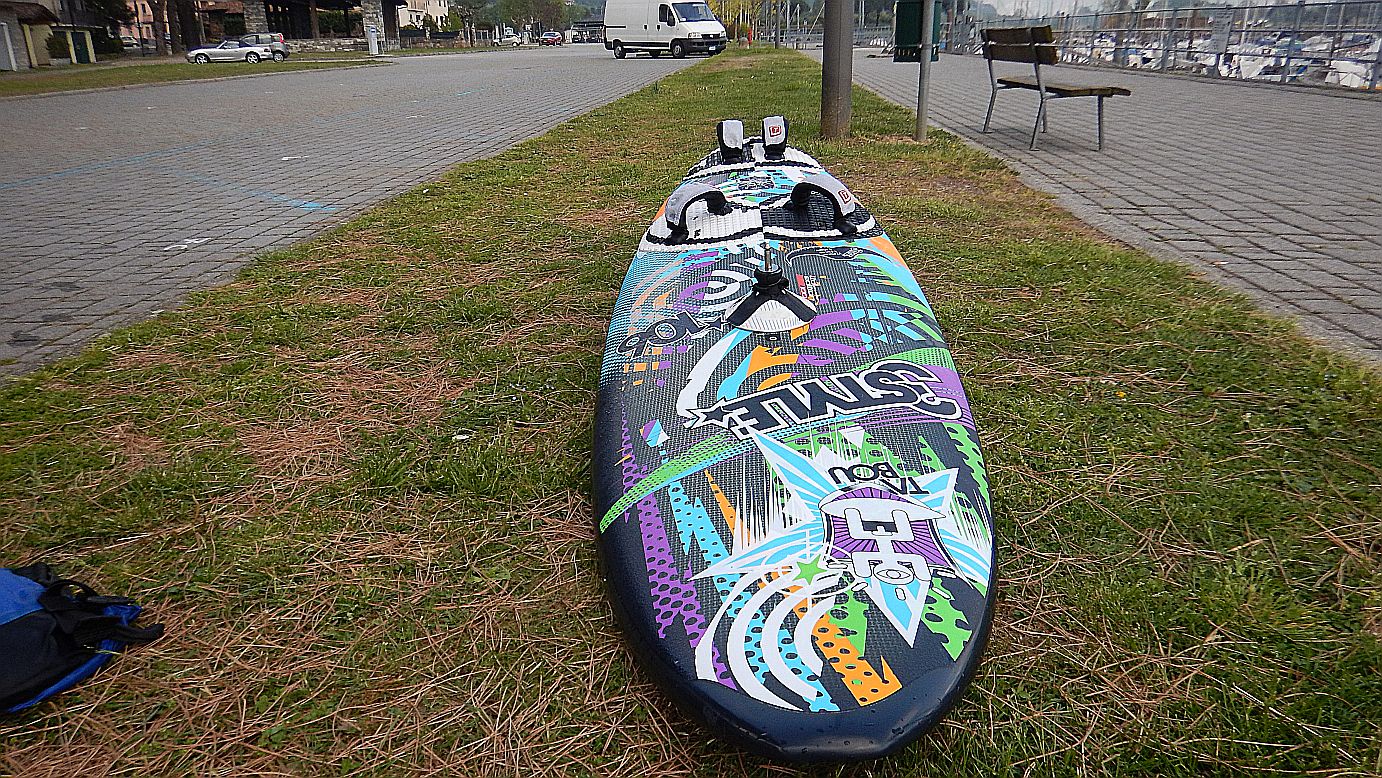 Even just watching it on the ground, you realize it's a mix of genres. Flat rocker that really provides an immediate and easy planing (in many reviews, too often, the early planing is an overused and misused term even, even when speaking about boards that require a minimum of technique to let them plane, and also about wave boards that get into planing only on a broad reach). The scoop curve is flat at first (this also ease the early planing), and then rise towards the bow, to ensure the chance to use the board also in waves/chop conditions (within certain limits of course, in the case of waves).

Rounded side outline with smooth curve from bow to stern, to facilitate the handling of the board, but almost freestyle boards rails; a slightly aft volumes distribution, balanced anyway, which makes the board stable under your feet, and apparently wider than the actual 62 cm. 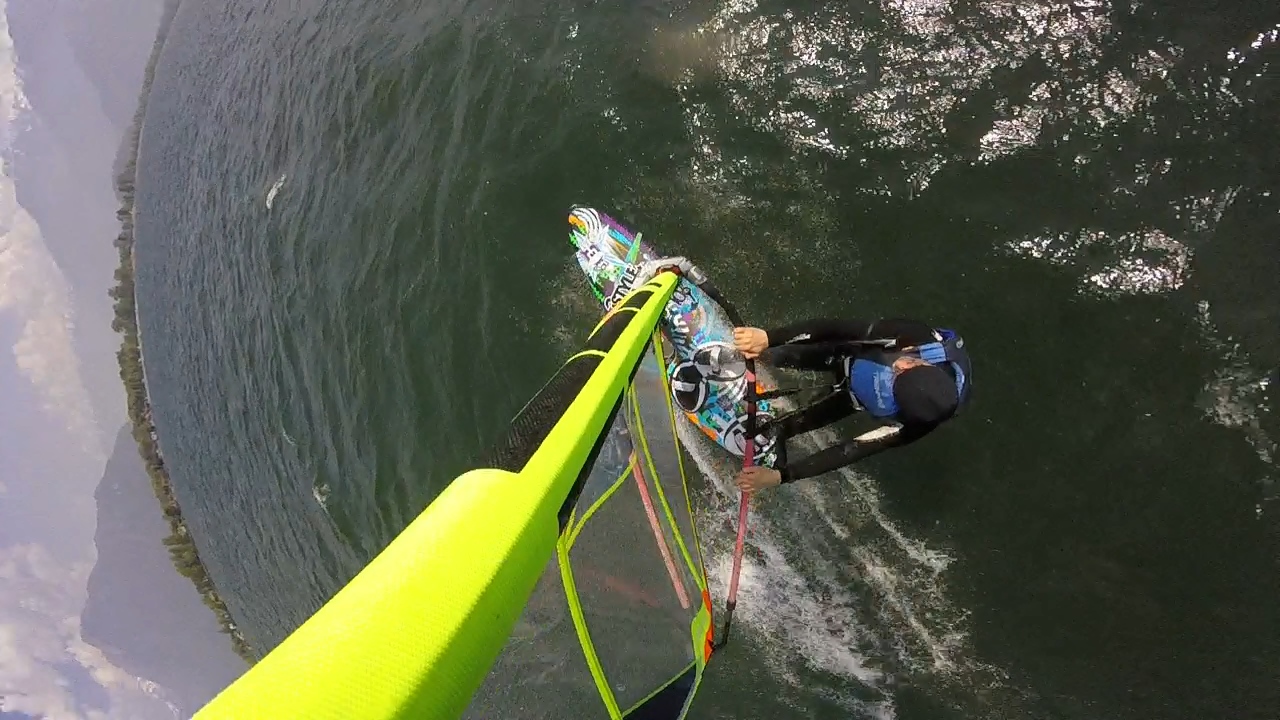 I tried the board matched with an Ezzy Zeta 6.4 2017 (another exceptional product, which I also reviewed in this website), on a day with medium breeze, 20 knots in the best moments, and never less than 14-15 kts, with a short and steep chop, of 30-40 cm. In best moments, the sail was too big, but the Tabou has always resulted under control, and allowed me to manage without any trouble the overpowering. 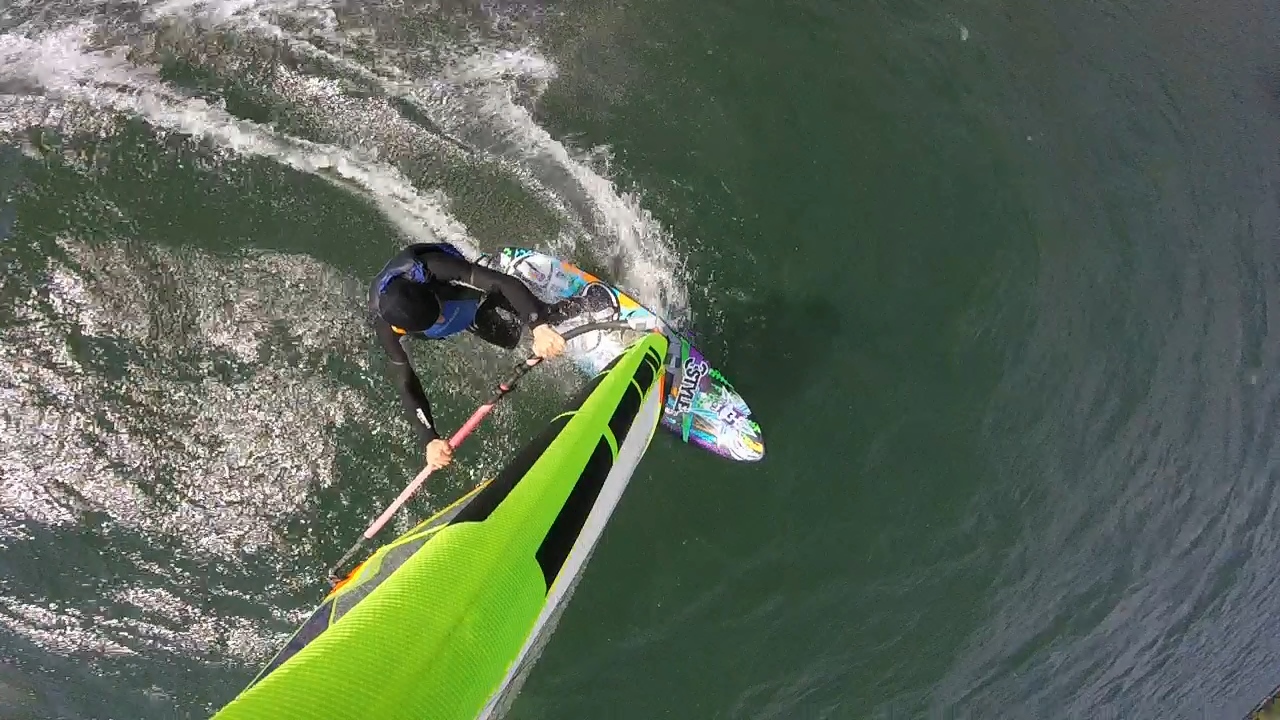 In the water, the board was impressive ....

You just have to push slightly with your front foot towards the mast foot, and the board starts planing even when hauled away; yes, hauled away, if it's windy enough!! But, it has no abrupt and sudden accelerations, and it does not escape under your feet, putting the rider in troubles. One of the things that you appreciate most is the fact that the board is always in control, at any speed, and at any direction.

The first power jibes appeared soon easy (and I must still improve a lot in this maneuver). The board bears away with so much speed and turns with a very smooth (but not so narrow) radius, and in full control. It's definitely a very didactic board, which will allow me to learn a lot, giving me time to understand stance and attitude errors, and the right moves that work, and to assimilate.

The board prooved to be really fast, and funny to jump, granting me the opportunity to take off, if desired, with each chop. In the air, it is easy to control.

The high speed also allows you to enter in the fast tack gliding with a lot of momentum, giving more time and stability under your feet, in the side passage. 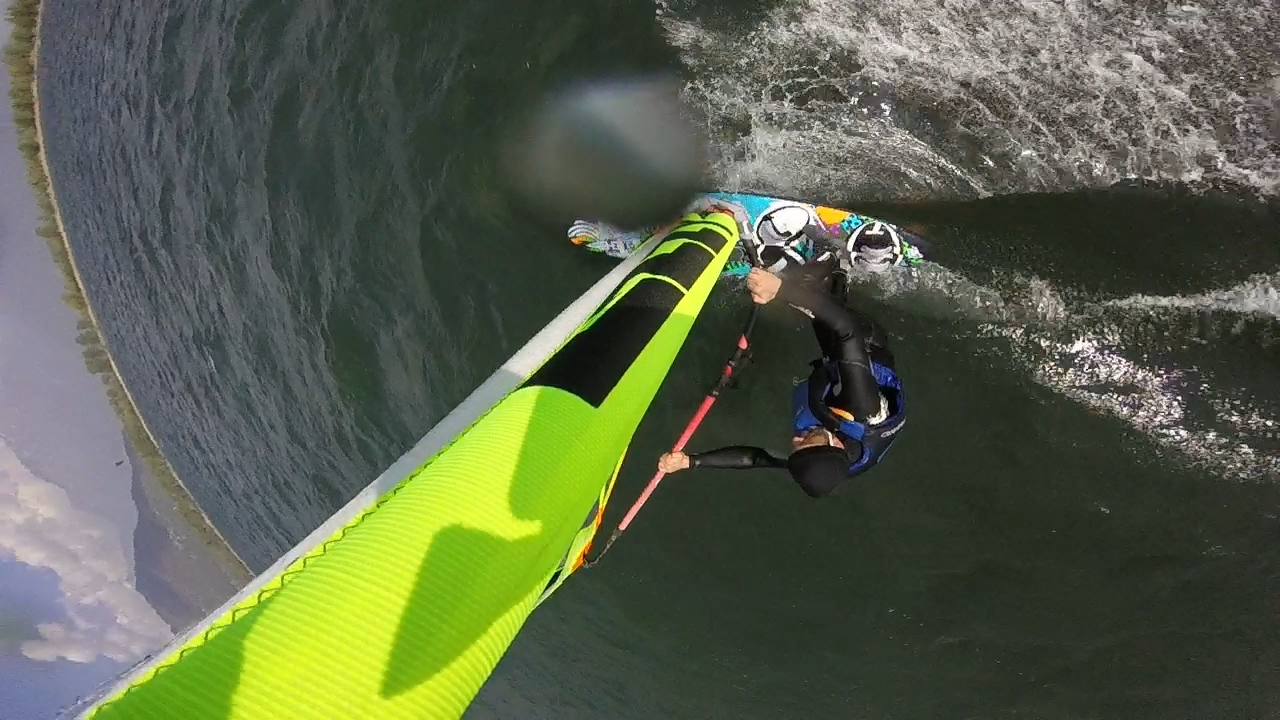 The board is equipped (and I tried it this way) with a freeride fin, of 32 cm. I have also equipped it with an MFC freewave fin of 25 cm, to use it effectively with sail from 5.5 to lower sizes, and even at sea in spots like Hyeres, which can not be considered wave spots, but where you can happen to meet funny bump and jump conditions, with shore break of one meter and a half, and some "mountains" offshore, even 3 meters high. I have to say that this is the fin I used most, and that gives me great satisfactions, since with this fin the board becomes more loose and free.

Yesterday, on Como Lake, however, I tried to surf the small chop (regular and within half a meter), to understand how rapidly the board changes direction. It seemed that, even with the freeride fin, the board, in these conditions, is sufficiently reactive. 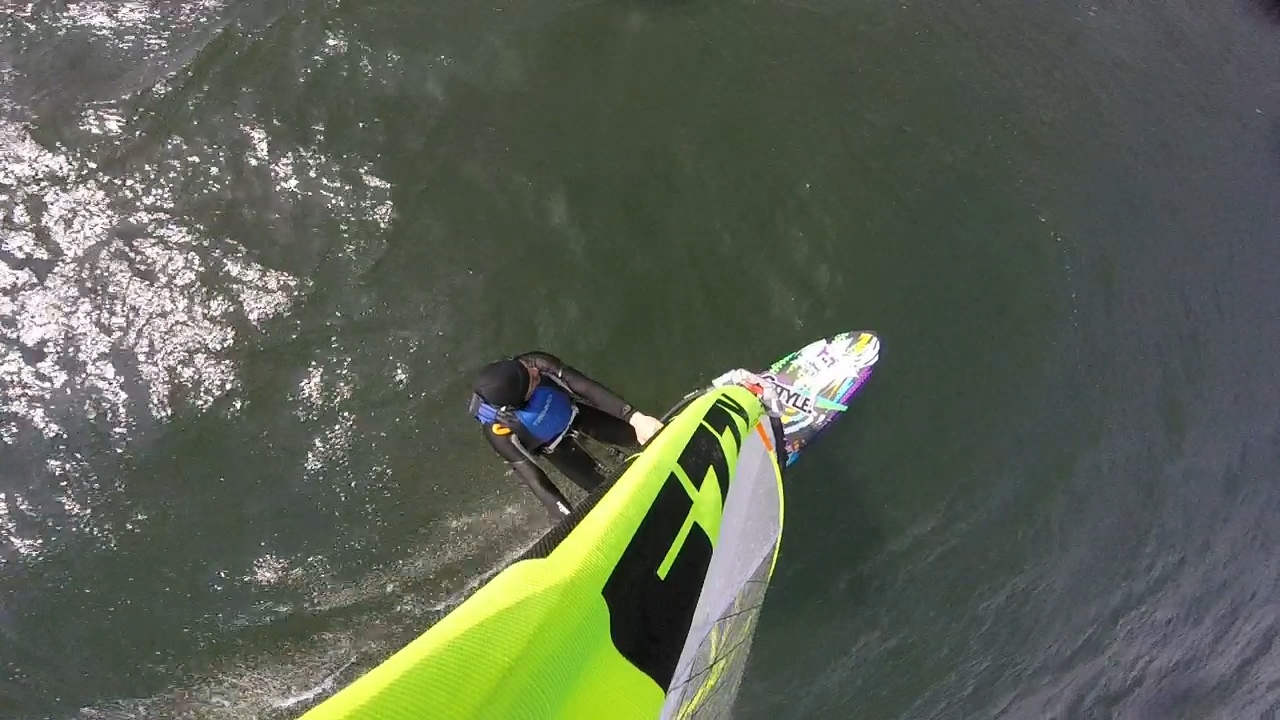 After this test in a lake spot, I also tried the board in a seawater spot, and in more sustained wind conditions, with a less flat water surface, under typical bump and jump conditions. For the sake of accuracy, I tried the board at Porto Pollo, Sardinia, with disordered chop conditions, and 25-30 knots of wind, and at San Teodoro (again Sardinia) with 20 knots of wind, and with regular waves, about a meter and half high. On the latter occasion, the board turned out to be perfect, and gave me a memorable session. In addition to confirming the abilities above described, it has proved to be reactive and fun, for surfing in the waves. In strong wind and disordered water surface conditions, however, it was preferable to lower the volume (changing board), to have something less cumbersome to handle under the feet (therefore not a shape or model problem, but simply a size matter). In the very wave spot, it's obvious you need another board. Infact, I have to say that I tried the board also in small wave conditions (1 meter high), and the board shows a turning radius according to me not enough tight to happily ride among waves. In these conditions, I change for my 86 wave board.

I decided to buy this board, changing from a Fanatic Freewave 105 TE 2012 (another lovely board), why I need a board better suited for northern Italy lake spots wher I often surf (Malcesine, Pra, Pier, Como Lake spots with strong Foehn winds), characterized by strong, but often gusty, winds. The Fanatic turns better (the shape is almost wave oriented), but it does not tolerate poors for too long, during wihich it loses the glide. The Fanatic is a board that performs very well at sea for bump and jumps, and for some waveriding, but I do not live and I do not go out only at sea spots .....

Also, I need a more teaching board, adequate to my level, more stable and under control while riding (the Fanatic does not bear overpowering too much).

I had already noticed the exceptional qualities of this model, with my Tabou 3s 86 CED 2009. The version 106 LTD is the final confirmation of the validity of the project.

The GoPro video taken during the test of Tabou 3s 106