In summer, Greece is a good chance for those looking for a location that offers a good compromise between the typical needs of families with children and our never-ending windsurfing desire. High frequency of windy and warm days, thanks to Meltemi, an emerald sea, and many places with stunning panoramic views. This July, we went to explore the island of Paros.

After carefully reading the review of Paros windsurfing spots (see also the article published here on Waterwind), for my family holidays, this summer, after several years, I planned to return to Greece. Having made some economic assessments, and considering the fact that we had planned stops in Athens and at the Metheora monasteries, we decided to go with our car, getting first the ferry from Ancora to Igoumenitsa, and then from Piraeus to Paros.

In Paros, we stayed in Aliky, a quiet little village in the southern part of the island, which turned out to be a fairly strategic location, as it allowed me to reach both the Pounta spot, opposite to Antiparos, on the west coast of Paros, and the east coast spots, in particular Golden Beach, and New Golden Beach (for Tsoukalia and Molos Beach, instead, it is better to stay closer to these spots, which from Aliky are almost 40 minutes away by car). Aliky, in comparison to Paroikia, or Noussa, in the months of July and August, has turned out to be a small oasis of peace, however endowed with good place where to sleep, and excellent restaurants (memorable restaurant Mourajo). 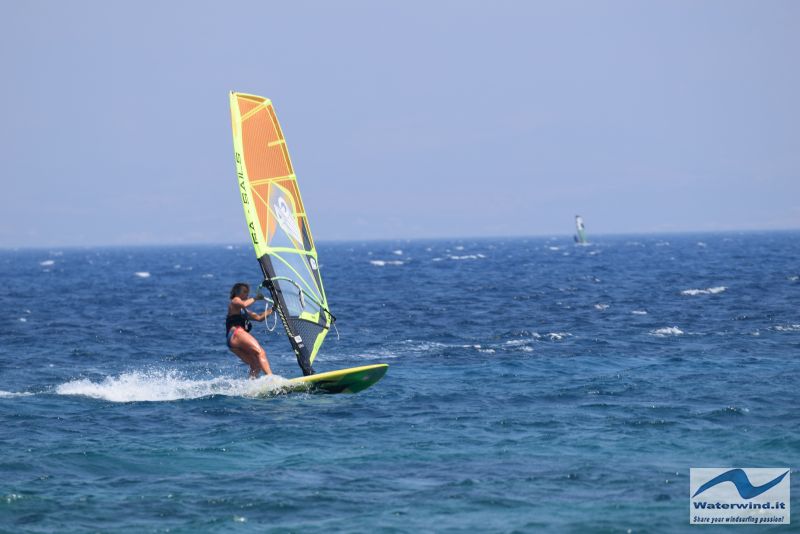 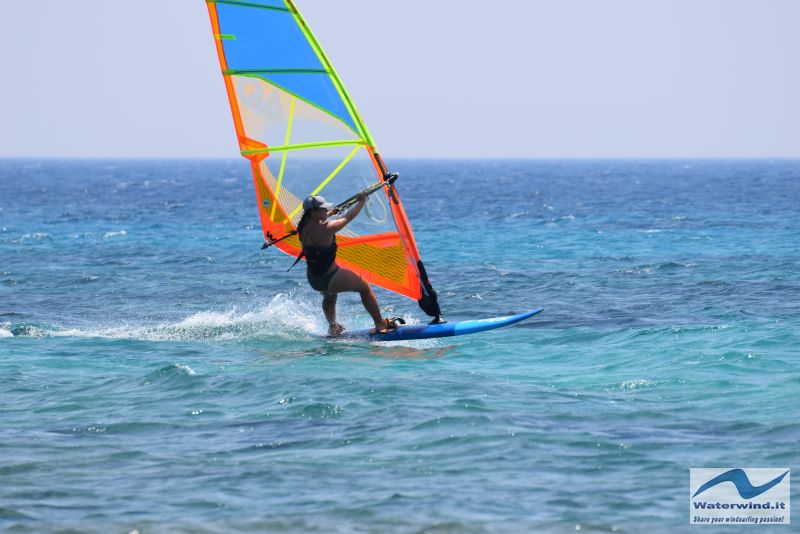 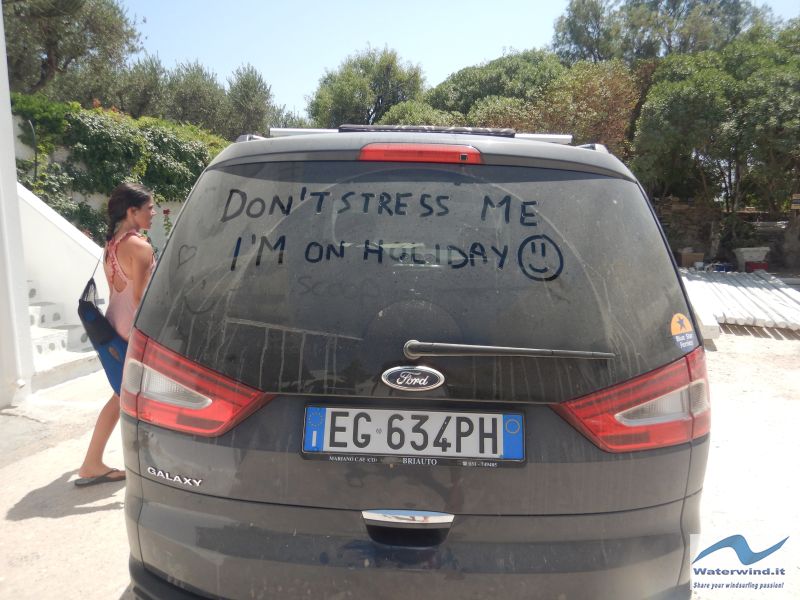 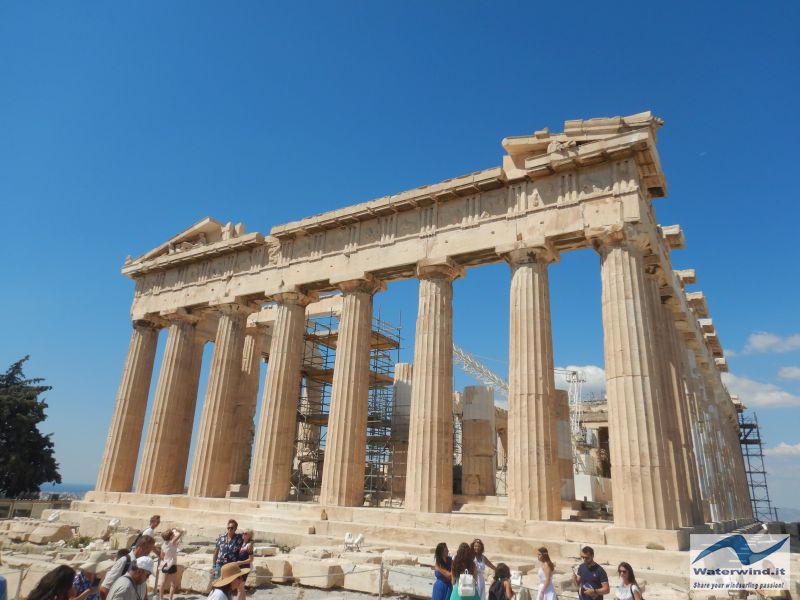 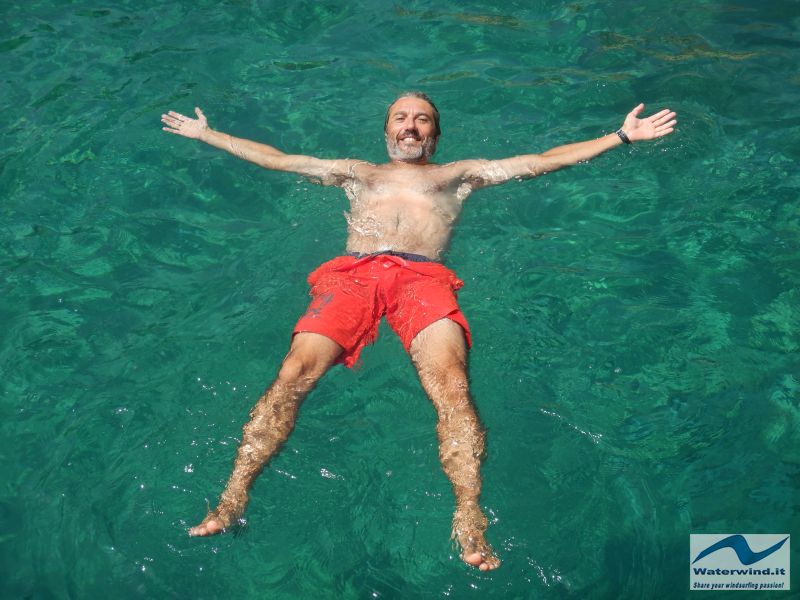 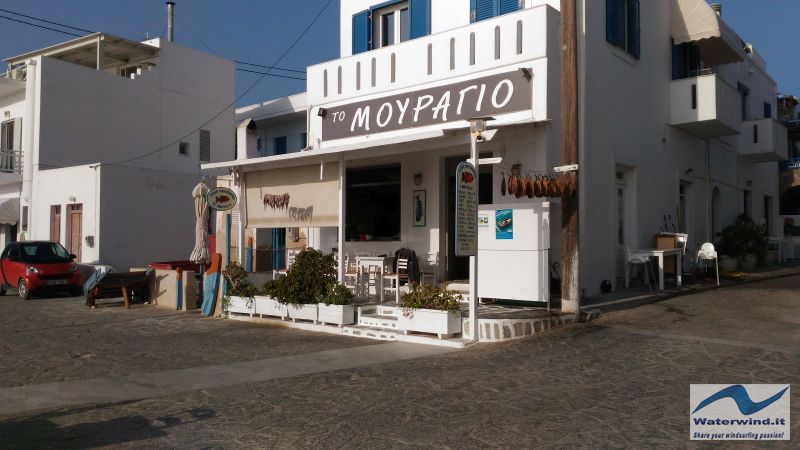 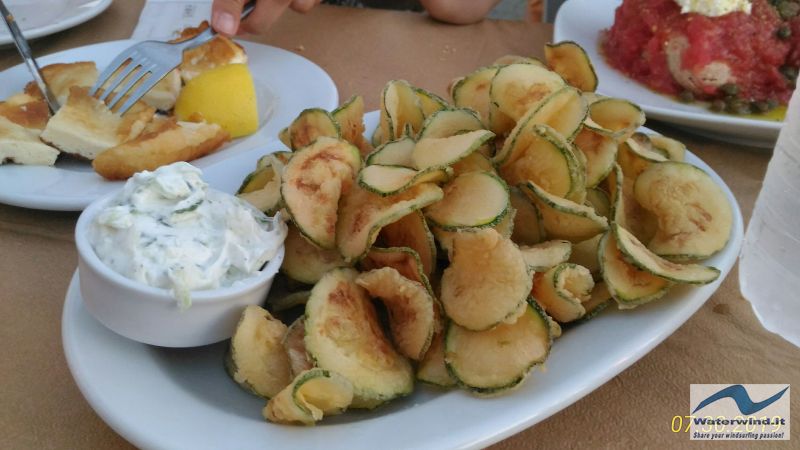 My friend Mario was often placed at the New Golden Beach with his family, and he often proposed that spot. After a few days, also because I have an explorer spirit and I'm rather curious, I learned to know well the other spots on the island (in the review of the above mentioned spots, you can find more details).

During my stay (27 July - 4 August 2019), there were three and a half days of Meltemi (therefore, not many), and moreover with a somewhat anomalous direction. In fact, the wind has often been oriented from NW, instead of being from NE, as usual.

Sunday, July 28th, the day after our arrival, predictions seemed to be fairly good. After the previous week with a nice wind, while we were in Athens (due to problems with my family, I had no time to try Loutsa, the spot near Athens), the wind, however, was spiteful on Sunday.... When I arrived on the spot towards 11.00, it was right fot a 4.7; But I had just the time to rig, and it dropped .... It went up again a little later, and I made an attempt with the Ezzy Elite 5.3 2019, and the Fanatic Skate 93 2014, but I was able only to get planing every now and then ... Anyway, I explored the spot, which turned out to be very pleasant at the beach, and with a wonderful view in the water. On the spot, the legendary Colin Whippy Dixon!

After a few days of calm, in which I took advantage to visit the island with the family, also scouring Antiparos which turned out to be very fascinating, I managed to do a real first day entirely dedicated to windsurfing, on Wednesday 31 July; it will also be the most satisfying day. 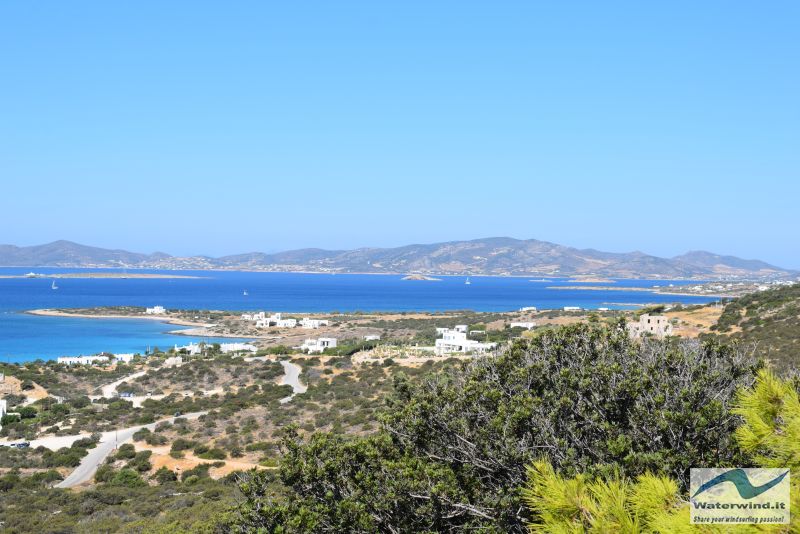 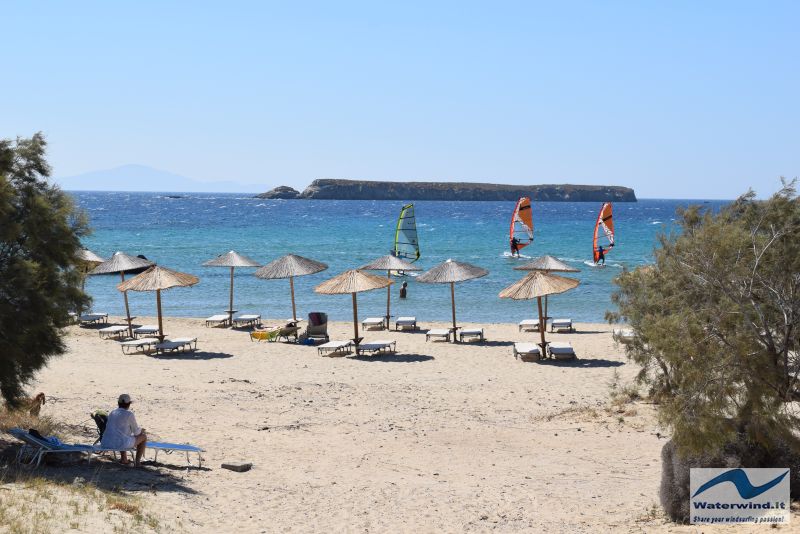 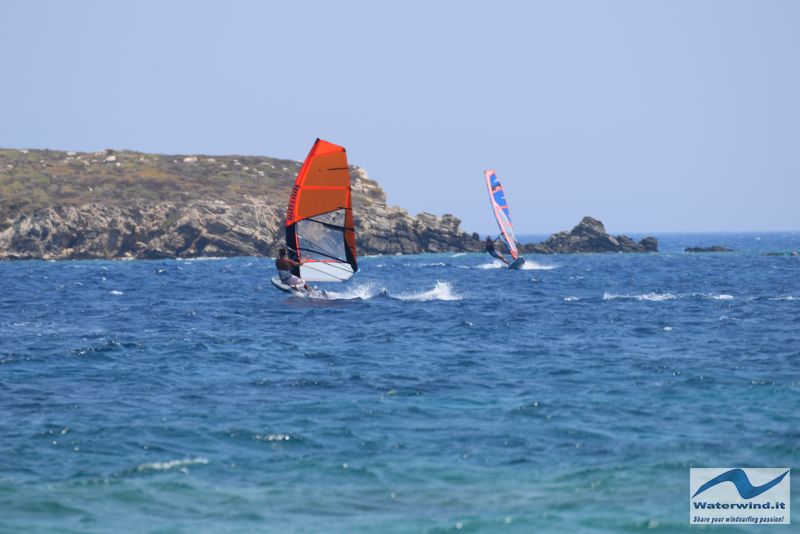 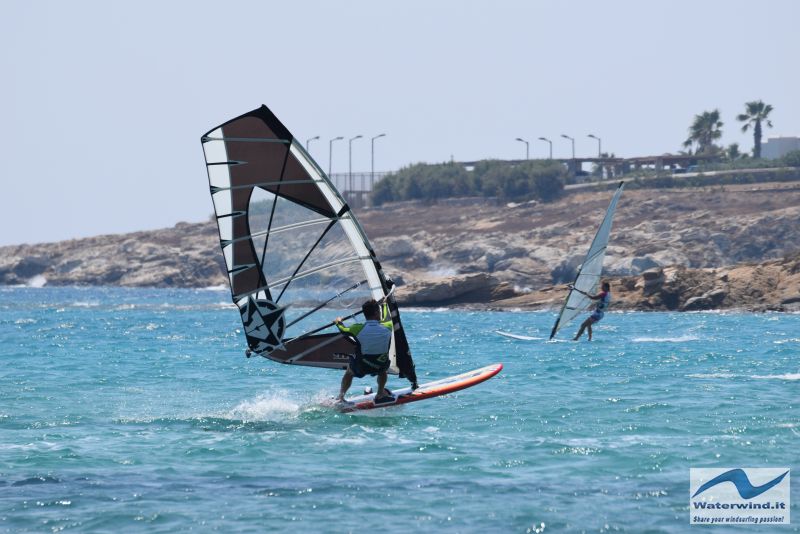 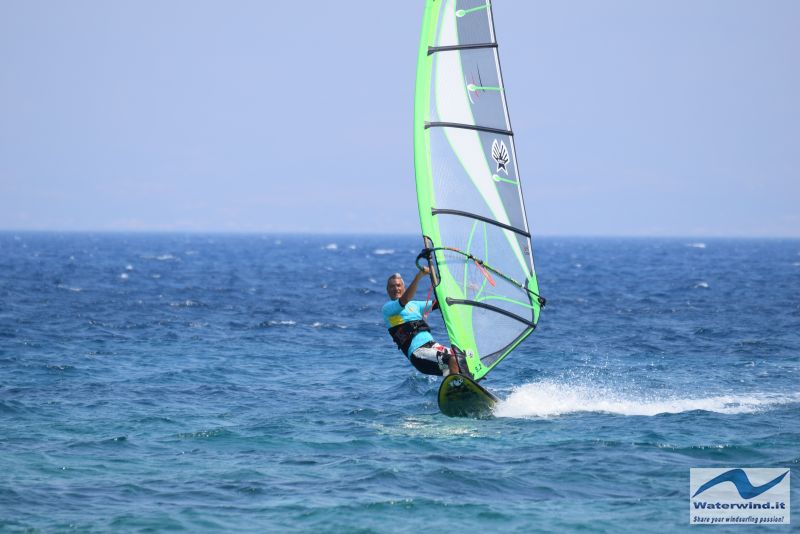 Once again, I had confirmation that I have to trust my impressions... Wind from N-NW. As soon as I arrived with car from Aliky in sight of the East coast, I realized that near the shore, the sea remained a little covered by the wind, and that the wind was a bit gusty. I thought: do you want to see that Pounta is better, today? However, I went down to the New Golden Beach, as forecasts gave the strongest wind after 13.00. After some chatting, I rigged the Ezzy Elite 5.3, 2019, and I entered with the freestyle board 93, around at 12.30. The wind remained gusty for almost all the hour I was in water, variable as direction, and with the water surface annoyingly choppy.
The view, however, was really very beautiful, also because of the suggestive little islands in front of the beach, and with the sea that, when you return to the shore, flew under my board with all the possible shades of green and blue. I also spotted a turtle at sea when riding (as it had already happened to me in Oman).

When I returned to the shore, fortunately I spoke with Paolino, who has been attending Paros for many years, and who had ridden with slalom equipment. Paolo confirmed to me that the conditions hadn't been fun for him too, and, above all, that Pounta probably could work better with this wind direction!

Instead of returning to the water, I unrigged and went to Pounta, after a wise stop at the mythical bakery in Alyki, for a snack with a beer.

At Pounta, I entered into the water with the same equipment used in the morning, and I really enjoyed it. Constant wind around at 20 knots from NW, and ordered water surface (chop at most of 20-30 cm). Relaxing ridings, and many closed maneuvers. It is the kiters' spot, but the channel between Paros and Antiparos is very wide, and it is easy to find a quiet and uncrowded area, where to ride almost alone. Panorama a little less beautiful than the New Golden, but session in perfect conditions. I drove back home with the Dire Straits playing at full volume ..... 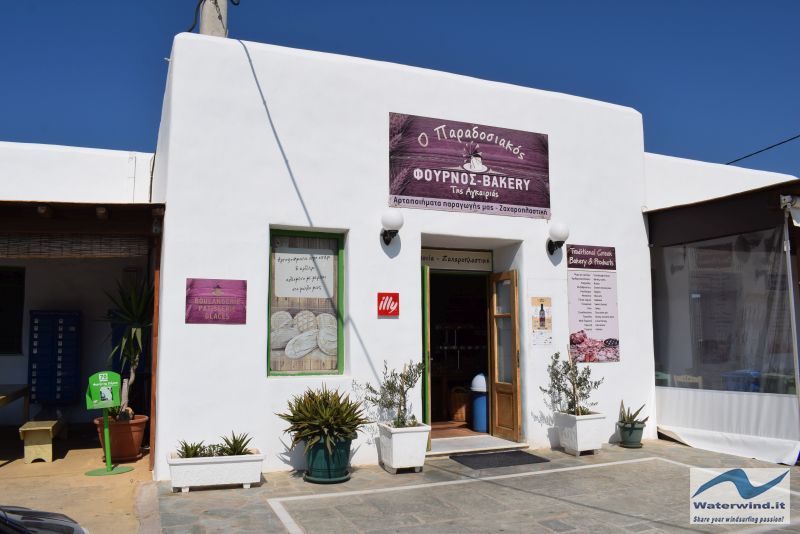 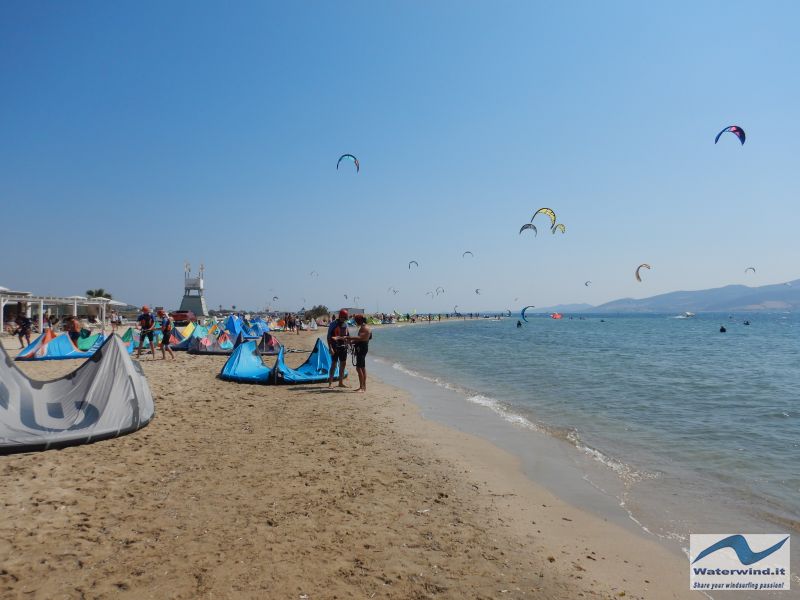 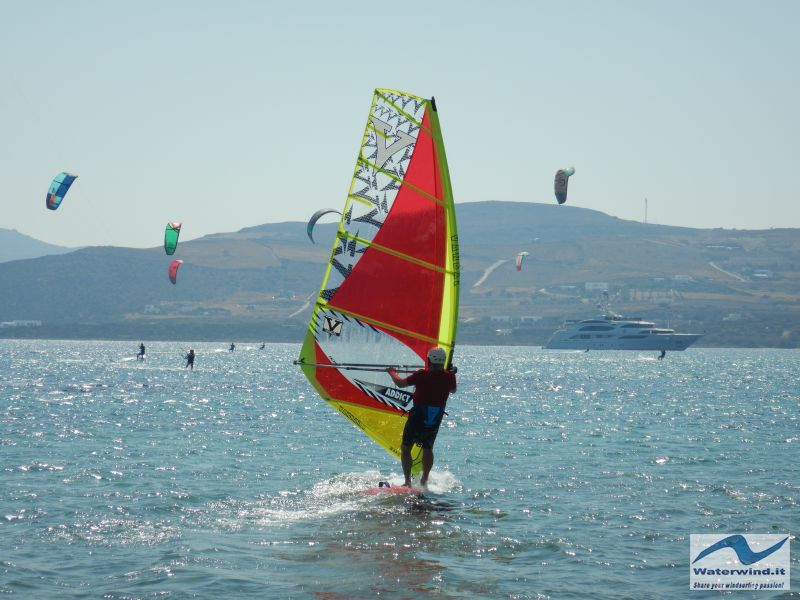 Thursday, August 1, I tried in every way to make New Golden please me ..... I gave it another chance in the morning, as the wind was expected to be stronger. I went out with the Ezzy Elite 4.7 2017, and the Tabou da Curve TE 80 2016, then quickly changed with the Fanatic Skate 93, as the reduced volume made it really difficult for me to acquire and hold the glide in wind lulls. But the conditions of the spot, with NW wind, were the same as on Wednesday. Gusts and chops to sell. Especially, when riding offshore the chop was unbearable for me: steep and close, with a height of around 40-50 cm, good only for breaking my knees (at least with freestyle). I really think the spot may work a little better with NE. 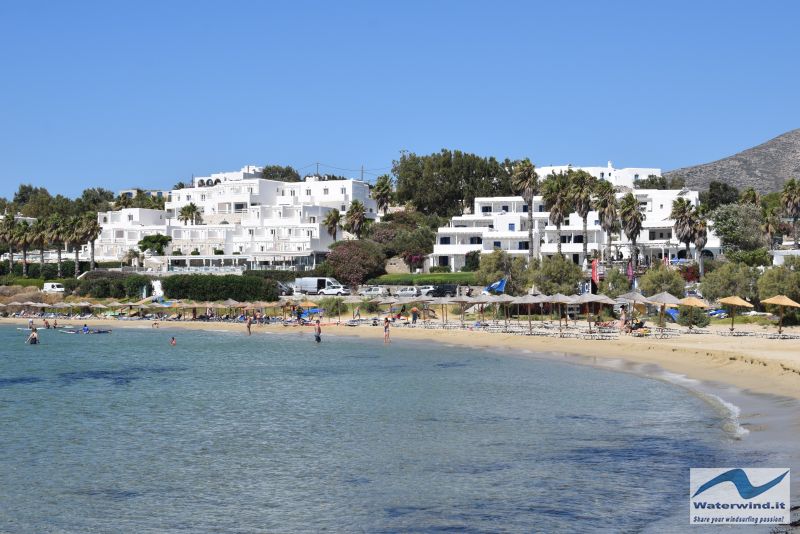 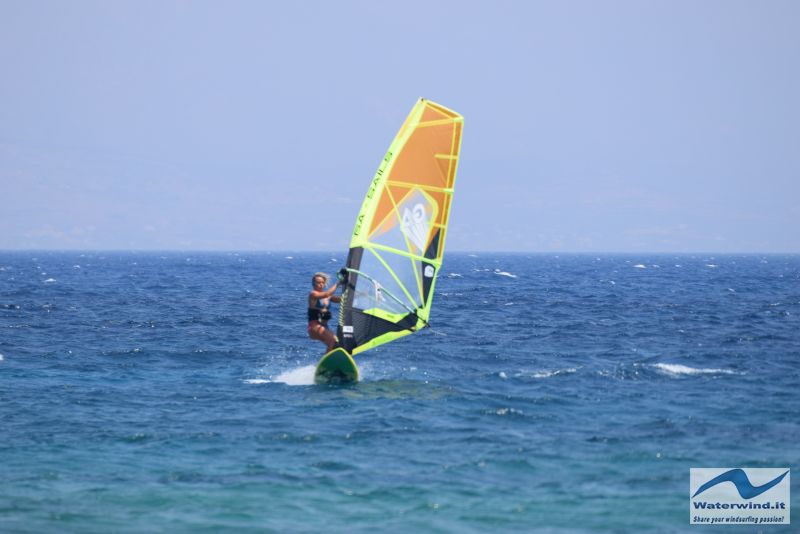 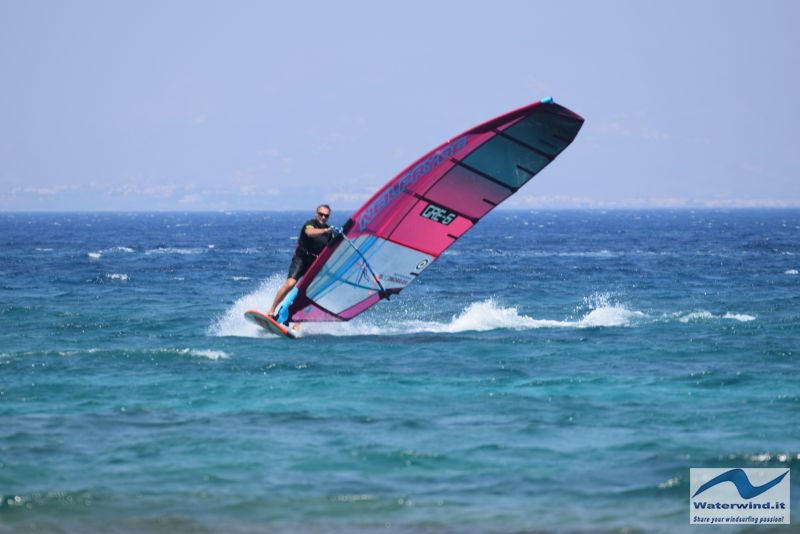 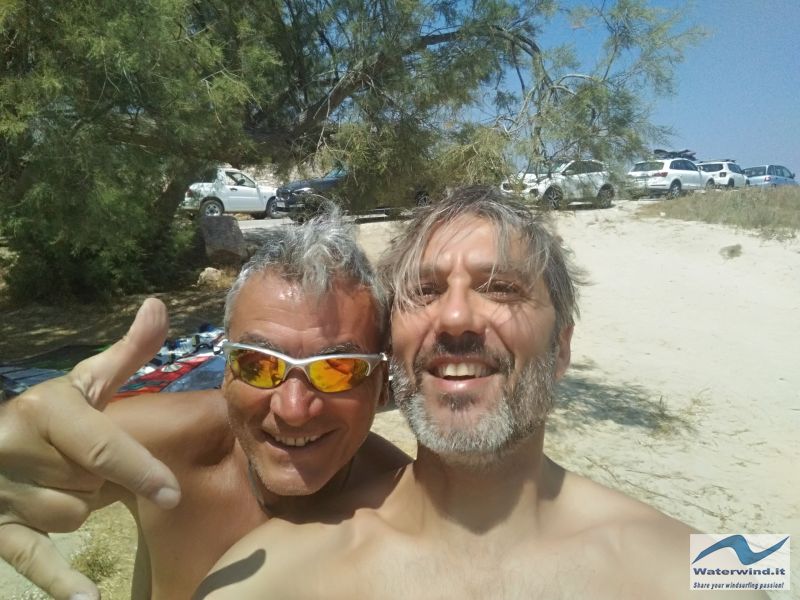 I also went to Golden Beach, but the NW wind was completely offshore there, and weak near the shore. Towards mid-afternoon, I was again in Pounta, where, however, the magic conditions of Wednesday did not happened again: weak wind (15-17 knots), and unstable, more oriented from N.

We spent the evening in Noussa, which is very suggestive, with beautiful squares, alleys, restaurants and inviting bars, but definitely very crowded. Great spot for getting a mate....

On Friday 2nd August, the forecasts gave a last real good windy day, in my week here. And, in fact, the wind rose and also quite strong, again from N / NW. But I have had confirmation that windsurfing and wife / family are not so compatible ... And for this reason, I prefer to fly, sometimes, to Oman, Morocco, South Africa alone for holidays in which I windsurf when and where I like .... . 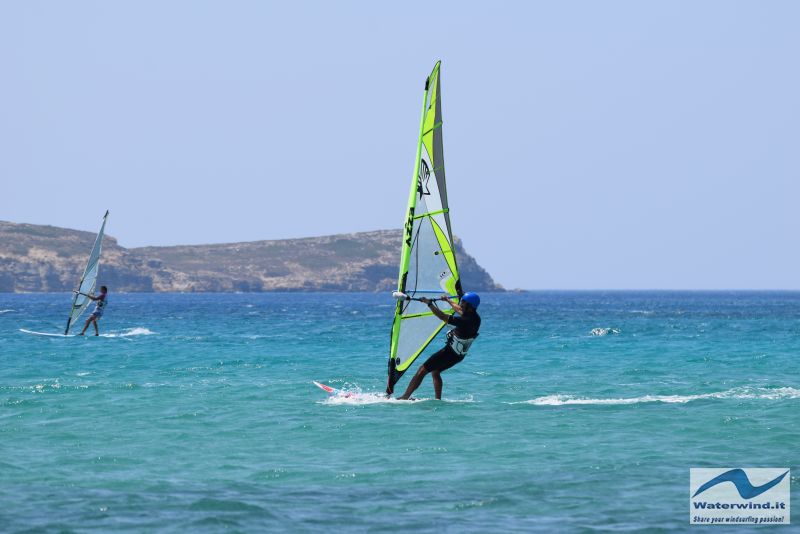 I only got rid at 4.00 pm, and at that point the wind started to drop ...... At least, however, I made further acquaintance with the island's spots.

Pounta works only with NW. With the N direction is already good only for kites (generally lighter wind). Molos beach was also good with NW, in the southern part of the beach (almost flat water), while the upwind part of the beach is also good for families (because it is fairly sheltered). Tsoukalia seemed to me the most serious and interesting spot on the island (along with Pounta, when it works). It is a spot where the NW wind enters beautiful side and strong (I think it also works with the NE, unlike Molos), with a choppy water level, but not like at New Golden. Here, in fact, I found many autocaravans and vans of windsurfers, but the pebble beach, and the sea (stones often even in the sea), seemed to me not very suitable for families (at least I don't have a very tolerant wife / partner...). At Golden Beach, the wind was always offshore. It looks like the Bergerie, in Hyeres, in France, with mistral ..... Near the shore, good for beginners, offshore strong and risky (if strong). Honestly, it seemed an undeservedly famous spot (maybe just because it's good for beginners, near the shore). The beach, however, is long and beautiful, with nice bars. I also saw it (on monday afternoon) with SW wind blowing, and it seemed to work much better with this wind direction. 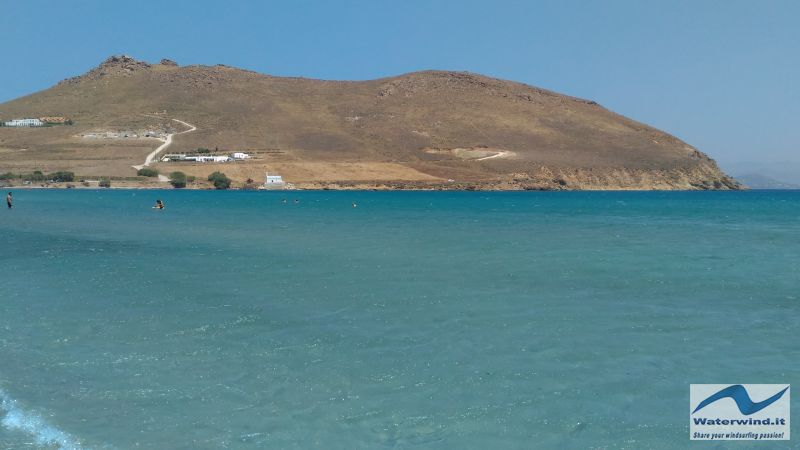 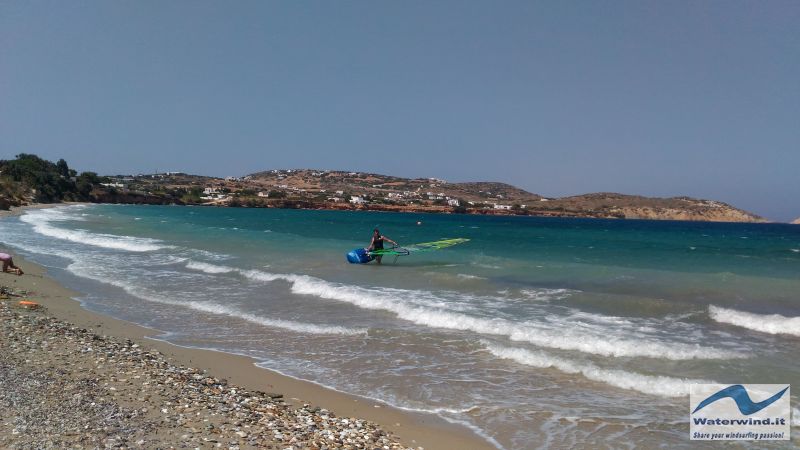 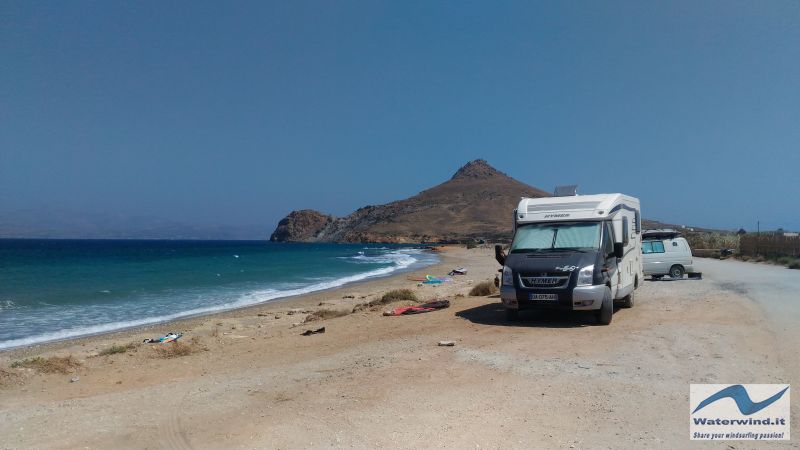 In conclusion, I didn't go to Paros having mainly windsurfing in my head, but I was hoping that it would give me some more satisfaction. Probably, with a less anomalous Meltemi the spots work a little better, but I think that other islands and areas of Greece (Peloponnese and Euboea island, probably - read review) can be worthier of being explored by those who aspire to a vacation dedicated mainly to windsurfing.

Click here, to enjoy the whole slidegallery of the trip to Greece and to Paros

The video of Paros sessions