Giacomo and Matteo have explored South West Corsica, performing some nice windsurfing sessions. Giacomo sent us this detailed report, in which he also reviewed the spots carefully. Corsica, like Sardinia, offers excellent conditions for windsurfing, and spectacular views.

Riders who have tested the spots, and used equipment: 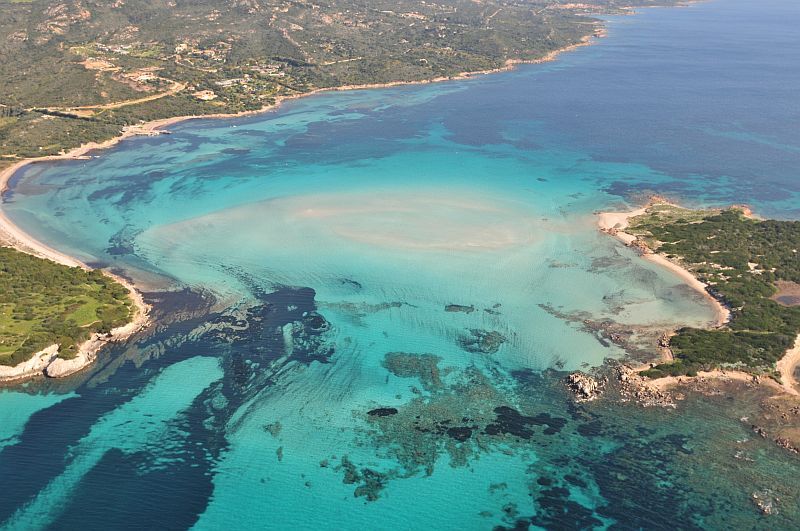 The spot is located at the Figari Bay, in the South - West coast of Corsica. See map at end of article.
It's pretty easy to get there: take the main road, and follow signs for Figari (you easily find them, because there's the airport in the nearby). You leave the asphalt road, at the entrance to the spot, marked by a flag, and you take a dirt road, that you have to drive up to the end, without being deceived by the various branches that you have every now and then.

You will arrive to a big parking lot, from where you continue on foot to the beach, sheltered, which runs along the bay. The body of water where you ride is quite small and characterized by really flat water. Some rocks, closer to the surface, are marked by buoys.

We went out with the wind at 25-28 knots (termic wind from the west) with many other windsurfers. That made the spot, quite small in itself, super crowded, to the point that, before any maneuver, it was appropriate to look good around and essential to respect the rights of way.

Even on the small beach it is not always easy to "park" the material.

The occasion when we were in Figari wind was fun but rather gusty (it blows well in the center, at the opening of the bay, while it looses in intensity near the two coasts). Locals told us that it is very often like this.
There is a school (Eole Figari), where you can rent material.

The level of windsurfers is varied and lots of them are beginners: the spot is very safe, and, with a little attention, everybody has his space to ride. After sometimes, it may be somewhat boring for those who do not try special freestyle maneuvers, but merely come and go coast to coast, because of the lack of funny waves.

The spot is highly recommended to those who are not still sure, with the basic maneuvers: they will be able to practice in optimal conditions, without regard to disturbing waves, or to worry about drift across the gulf. Even those who are already more good at windsurfing may enjoy a session at Figari, in total relax.

Personally, the only occasion in which I was there, I went out with a 5m pretty tightened, and with a 105 fsw and a 73 wave boards, the latter during the more windy times (there is no need for a very small table, because the conditions, even when the wind increases, are really easy; I would have gone well with the only big board, but I used the little one, because I like it a lot more and I feel better with it). Matteo was out with 4.1m and 80l. Both of us sometimes were underpowered.

I recommend bringing a large set of sails to avoid being unable to enjoy your session, also including small sails: if weather conditions are good, the wind is not lacking.

Last note on the bottom of the sea: do not be fooled by the small pebbles of the beach; once in the water, you will find sharp rocks. So, be careful, or wear of the windsurfing shoes (both me and my friend had our feet injured there). You go out on port tack. 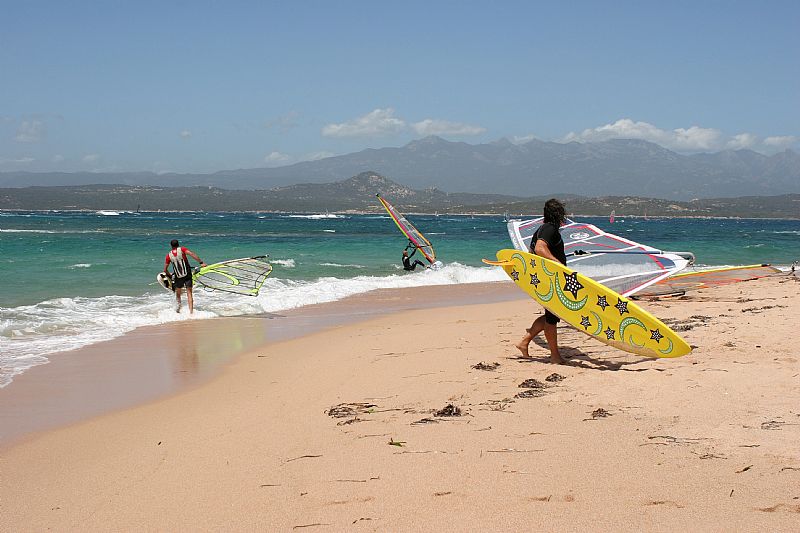 The spot is located in a wide bay, just below the Figari one, from which is divided by a promontory. Very easy to find: follow road signs, leaving the national road near the coast, and continuing up to the dirt parking lot (on the left), driving along a nice paved road. Although parking is great, it is not always easy to find a place (in August), because the beach from which you begin your session is frequented by bathers in the summers. You have a small windsurfing school there (Acasaglisse), as well as a stretch of beach with umbrellas and a pretty big bar, and a restaurant.

The wind blows pretty well at the great beach from which normally you start your session, although there are two small islands just in front of it. Be careful to the reefs, 'casue they are not marked by buoys or other signs. We have never found a place at the "official" parking in August, and we always went out from a cove to leeward, reached following a short dirt road, which continues through low bushes leading to "parking places" which are directly on the cove.

If you have to take this second option, I recommend the maximum attention to your feet (I cut myself twice, and in the following days, I struggled to walk, and I had to put some tape around my feet to go out windsurfing). From the cove there is a channel between the rocks of about two meters; once past it, there are no dangers, only some rocks, but visible, downwind: so be careful not to drift too much.

You need to find your own space to set your equipment ready for the sessions, taking advantage of the places where the rocks give way to pebbles, but you are facilitated by the fact that there it is very sheltered (circumstance that can make getting out a bit nasty, at the beginning, especially if you use a small board). More comfortable to go out from the great beach, but certainly the cove is more characteristic, even from a naturalistic point of view: it seems to be right in a wild place, very very beautiful.

Once in the water, conditions can be really nice: if wind is up at least at 15 knots, waves resemble big chop; when the wind begins to  reinforce, waves rise very well, and and they can give a lot of fun. The waves come from the side direction, but keep in mind that the direction of waves and wind are almost the same (hence "onshore").

The first day we were there, the wind got up late, and we went out with sails of 6 m2. On the second day, the wind and the sea were rougher (with 5 m2 sails); the third day we were able to come out in what I think are the optimal conditions for the spot: big and long waves, pretty constant wind over 30 knots, even more intense in the gusts, so we were allowed to use smaller boards and sails.
Under these conditions, better to be equipped with an agile board, and to have some confidence with the basic maneuvers (waterstarting very important). Depending on how the wind is oriented, some waves can be surfed in a way, while, in the opposite way, you have good ramps to jump. If the wind gets even higher, the largest waves begin to break.

The spot is really enjoing in the right conditions, and the location is extremely beautiful, which is typical of Corsica. Even if you cannot consider this really a wave spot, here you can train to session with more challenging waves: under the right conditions, it allows to become familiar with the rough sea, avoiding the obstacle of the shorebreak. You go out on port tack.