When it comes to windsurfing, planing is generally a point of no return ... If you have had the patience to overcome the first difficulties and learn the basic maneuvers, the thrill of gliding will make you definitely addicted to this sport. Let's see, then, to understand how to reach and maintain this state of grace.

Windsurfing, theory: how to get planing

(Podcast of the article, available for Supporters users, in the central part of the text).

After having published the articles about the  fast tack, power jibe, and waveriding, we dedicate this article to a fundamental windsurfing technique.

We often hear beginners, or little more than that, say they have been planing for 10 seconds ...... But is it true? Or, have they only experienced the emotion of a momentary acceleration?

So let's clear, first of all, what planing is (from a physical point of view), trying not to be too much complicated. If you want to bypass the theoretical explanation, just skip the part in italics that follows.

Gliding occurs when the windsurf board does not float on the water only due to Archimedes' thrust, but when, hitting the water as it goes forward, the board also receives an upward thrust from the water (as well as a resistance to advancement, called friction), which is added to Archimedes' thrust (the latter actually becomes almost negligible, especially at high speeds). The origin of this thrust is to be found in the energy of the wind that is transmitted from the sail to the board (since they are joined), which (not being able to drift too much, due to the resistance opposed by the fin and the shape of the board itself) proceeds forward, gradually gaining speed. As you move forward, the board hits the water which partially moves. Part of the impact energy remains "trapped" (due to the forces with which the bodies interact) between the board and the water (you can imagine that there is a spring between them), and then returns to the board by lifting it. This is the result of what in physics is called Newton's 3rd law (also known as the action and reaction principle), according to which if a body applies a force to another body, the latter reacts with an equal and contrary force applied to the first. 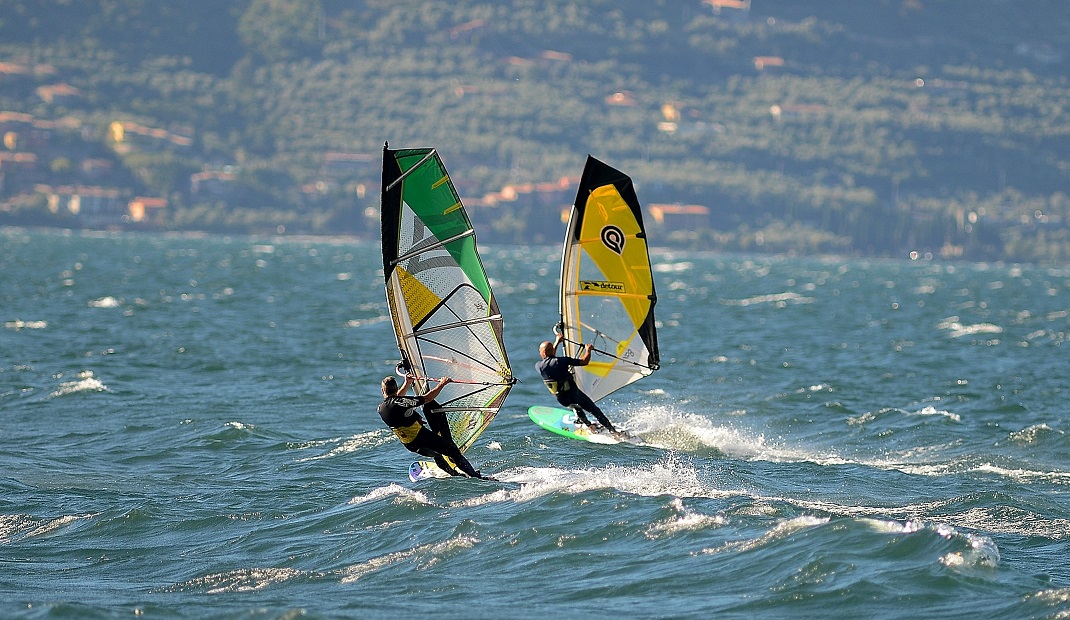 If the speed of the board is high enough, the reaction force generated is such as to lift the board definitely from the water, making the board ride almost exclusively on the stern. Moreover, in this way, by reducing the board surface in contact with water, the friction force, which would tend to slow down the board, is also greatly reduced. Therefore, the board acquires even more speed, emerging even more from the water. The extreme example of the application of these principles are the foil boards, which are now being seen around more and more often.

The result, therefore, is that you sail at full speed (full power, as we like to say in the jargon among riders), with the board bouncing on the water, resulting roughly half immersed, or, when you go really fast, only with the stern. 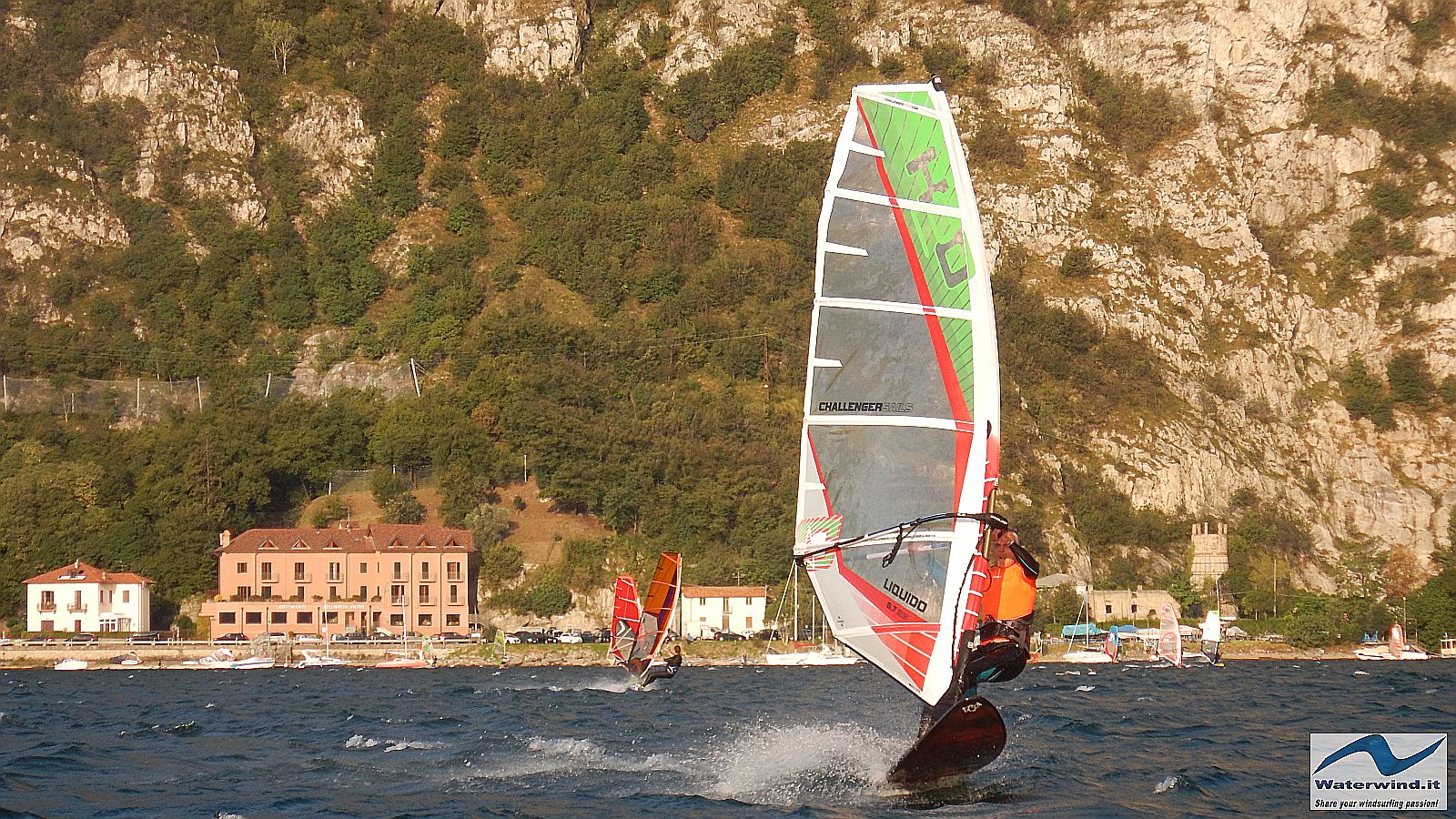 Having made this theoretical introduction, let's now explain how gliding is obtained and maintained.

You are sailing crosswind or upwind, not gliding, with your feet off the straps. I must immediately make an important consideration. I happen to see too many riders, who, when they are not gliding, sail keeping the body backward, and especially with the rear foot well positioned on the stern, in the middle of the board. Often these riders are overpowered (they got this bad habit right from the beginning), because they are convinced that big sails are needed to glide, and do not understand that, first of all, a correct body position on the board is fundamental. They are, therefore, perpetually in backward position with their body, as they are always in defense: the big sail pulls their arms and body a lot, and they are afraid of going into the catapult ....

This stance is deleterious when you are riding on a freeride board, but it becomes truly disastrous when you switch to other shapes, which are less easily gliding (wave or freestylewave boards). Therefore, I believe it is important to recommend that you maintain a forward position of the feet, with the fore foot slightly aft of the mast foot (with the toe oriented towards the mast foot), and especially with the rear foot at center of the board, just behind the front straps. The stern comes out of the water, does not sink in the water, creates less friction, and the board enters planing more easily. In order not to end up in the catapult, you have to pay attention to the gusts (always looking upwind), and be quick in performing the movements explained below.

To get planing, you have to follow these instructions....

In a few words, except in special spots where the wind is really steady, you will ride by drawing an S-shaped route, pointing upwind in the gusts, and bearing away in the lulls. Course corrections don't have to be as strong as if you want to tack or jibe, but they need to be timely.

Before closing this article, a last tip for the correct straps setting. This is a fundamental detail that can change the quality of your sessions. So, don't be approximate about this. Personally, I believe that the straps are adjusted and tightened to the right point, when the foot can enter just beyond the toes. They should not be so wide that you can put your foot in, so that the strap reaches your ankle. In the latter case, you will find difficult to properly push on the board side with your heels, when you want to head up (because your foot will end up in a too central position, on the board); you will also have difficulty in maneuvering, as it will be easier to have your foot stuck in the strap, when it's time to pull it off (especially for the front one), before tacking or jibing. So whether you wear surf shoes or not, always spend two minutes to fix the straps correctly before you start the session (or, do it in the water, if you realize that you're not correctly trimmed from this point of view).

Read also the guide to beginners for equipment choice.