Finally, the climate has become warm and the season of windsurfing lessons of our association goes live. Beautiful day of Breva (Termic breeze from the South) in Domaso (Lake Como), for the planing lesson that has seen two young guys coming from the near Canton Ticino (Switzerland) at work.

Windsurfing Lesson: how to get planing

Thursday, May 26, was a day of celebration in Switzerland. And, so, the two "cousins" from the Swiss Confederation, Mario, and Mario ... (the second one named Fox, to avoid confusion) asked us a little help to improve their planing technique.

We gathered in the spot of Domaso, already full of tourists coming from Germany, Switzerland and Holland: this spot gives always the nice feeling to be already on Holiday. 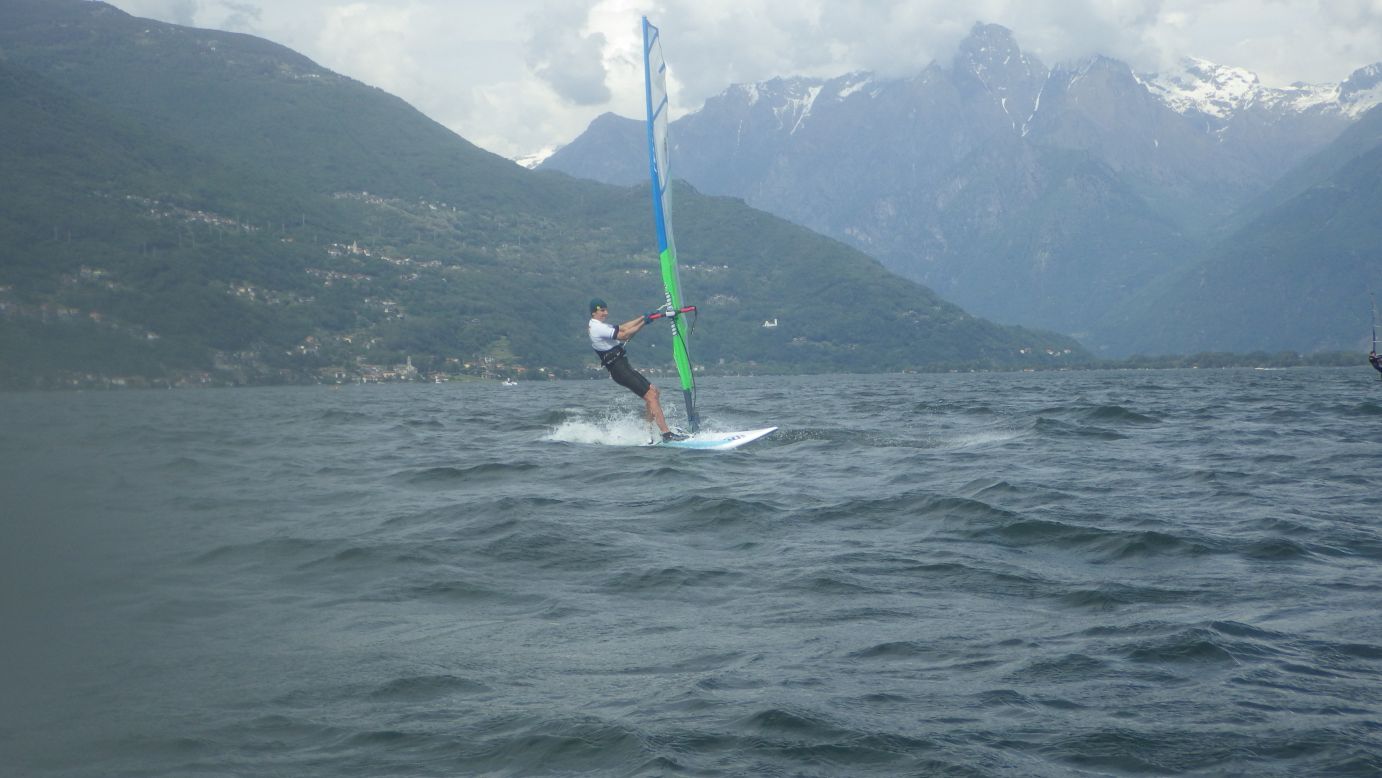 The warm climate of this end of may, due to the Sirocco winds blowing over Italy, is giving some beautiful days of Breva wind on the lake; and also on thursday, we had  good wind. In the first part of the afternoon and the lesson, it was oscillating between 10 and 20 knots (on more significant gusts), and 15 kts (more stable), in the second part of the session, when we went to ride near the mouth of Piona lake, an area that is always characterized by wind reinforcement and regularity.

After the meeting, at around 12.30, the first part of the session was held explaining the necessary theoretical concepts: above all, how to get the entry into planing, and how to hold it with both feet in the straps. While I was rigging my equipment, I also provided the two students some tips on how to trim the rig. 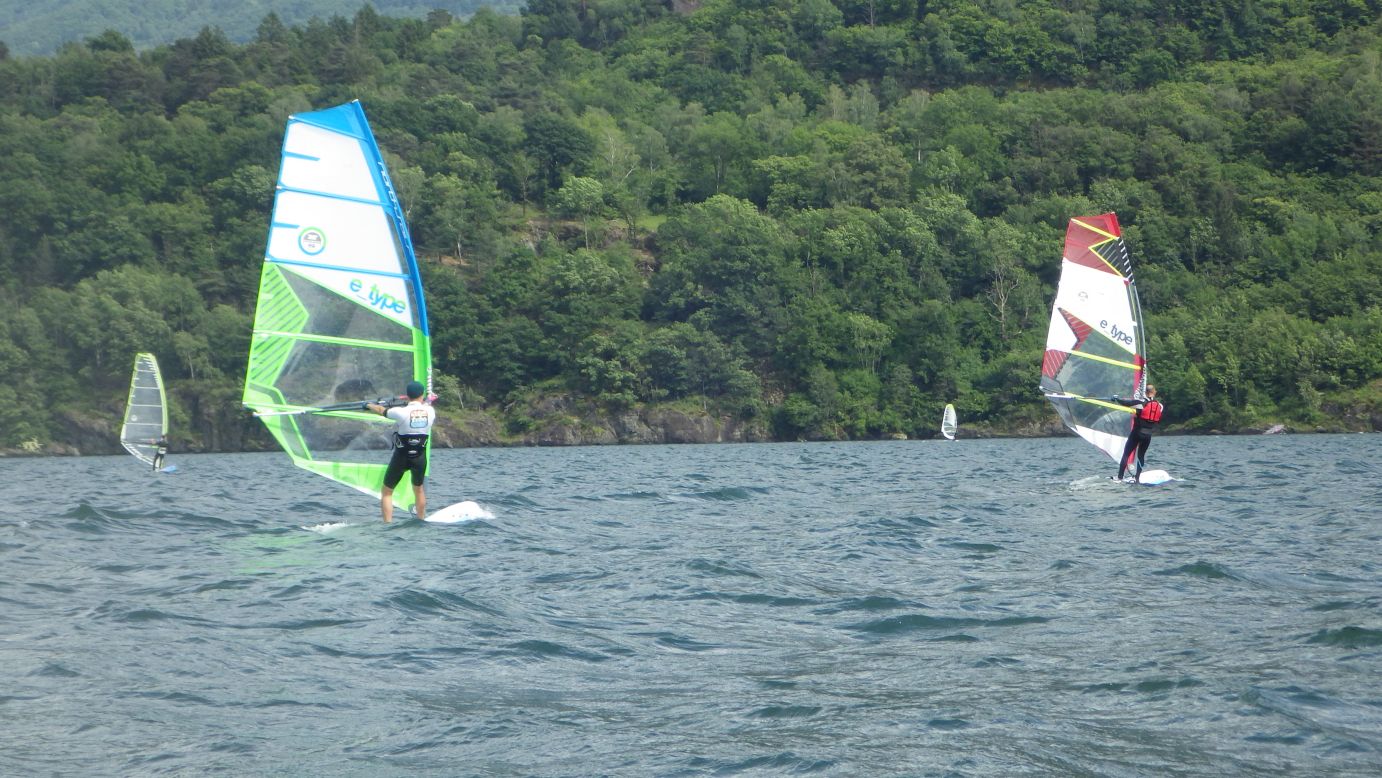 Mario and Fox, then, have rented the equipment at the WSC Domaso: two Fanatic Gecko 133 2016, easy boards, suitable for the purpose, and two North sails (see photos). I had the right intuition not to let them rent too big sails, because at times the Breva wind was really good (as mentioned around 20 knots): therefore, they have come out with a 6 and a 6.5 m2. All brand-new material, which, however, needed some adjustments in the trim (never completely trust the rented material). 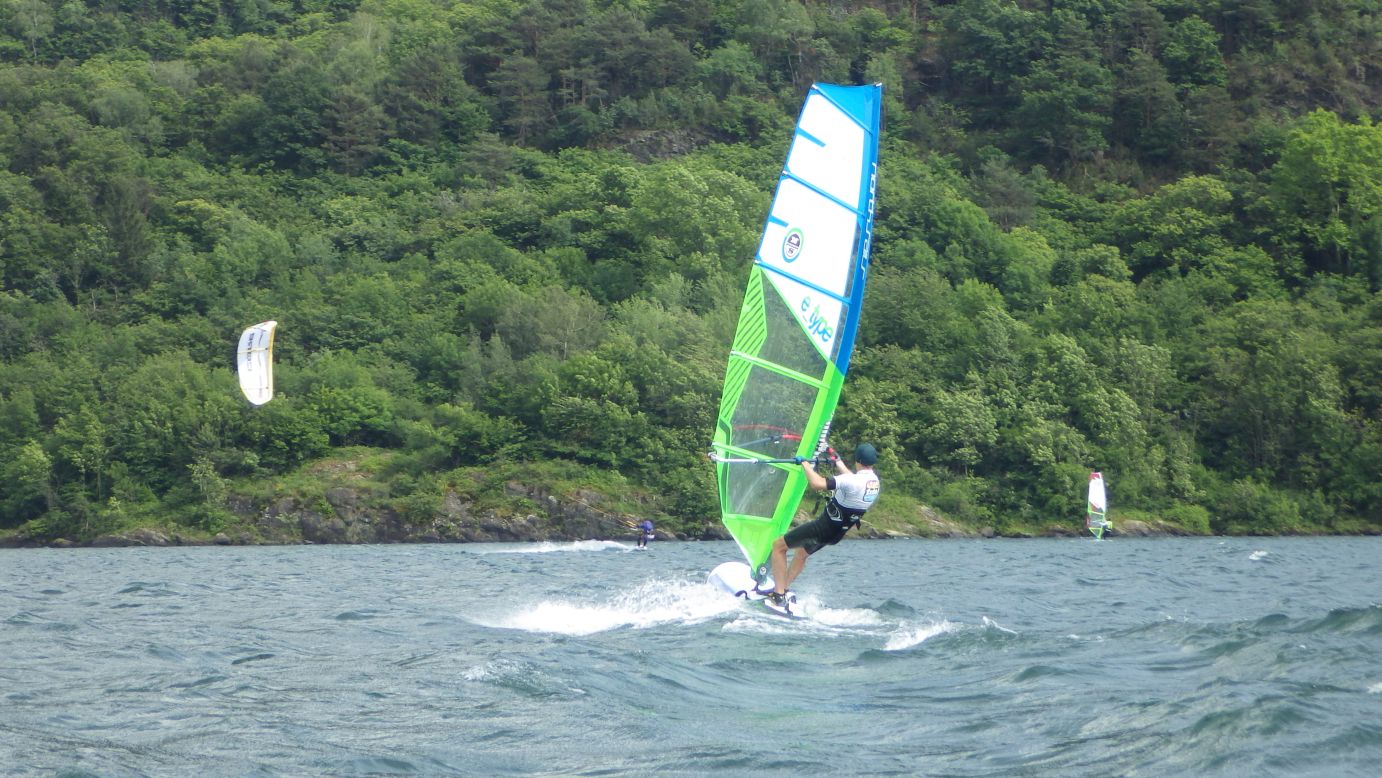 The lesson went well, at least, that was my feeling. I mean, for me, it was very rewarding to see the progress of those guys, in the hour and a half of the lesson in the water. The first glides are a state of ecstasy, which generally make you fall in love definitely with this sport.

In these lessons, we take no more than two students per instructor, to guarantee quality to the lesson. I sat upon my board in the middle of the lake, while Marco and "Fox" began to surf around me. The video shows their progression. 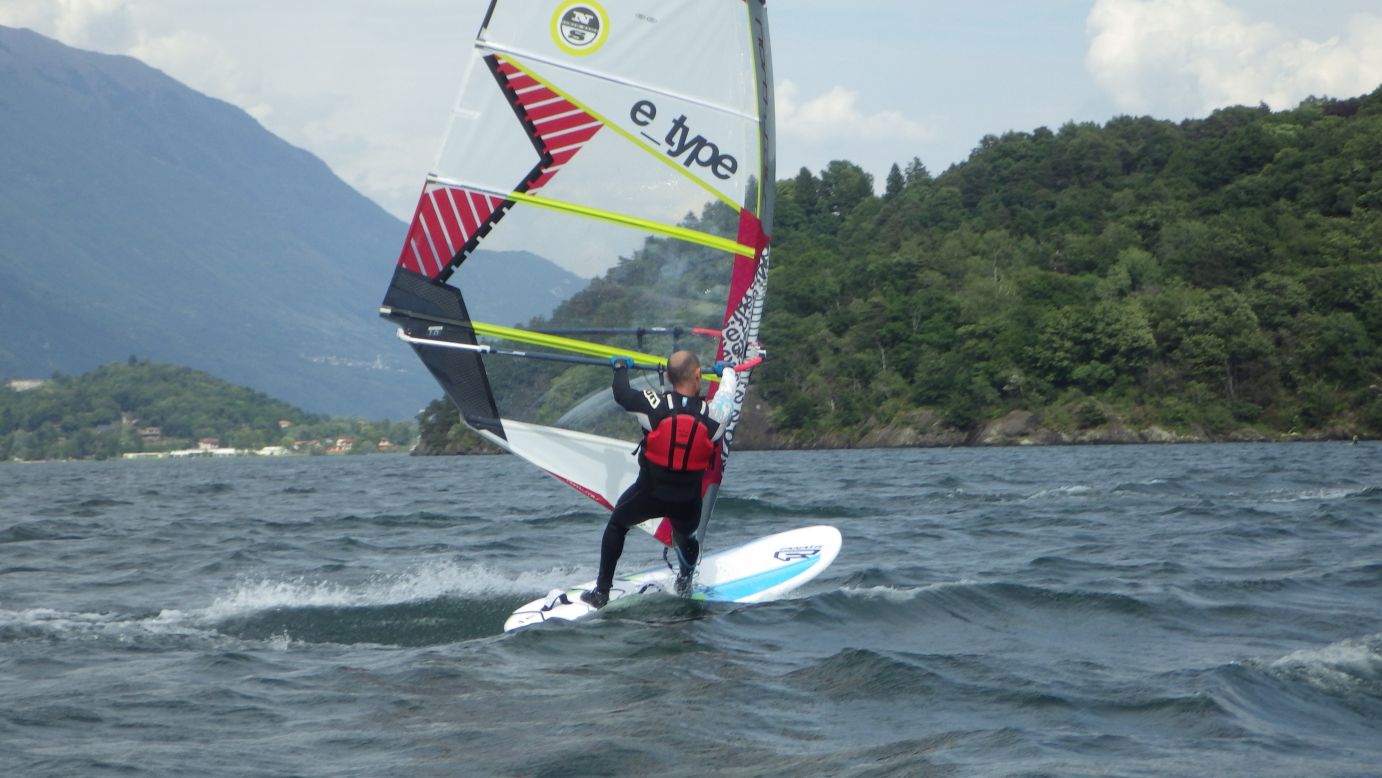 Both of them have committed at the beginning the typical learners mistakes (and I had to shout a lot to try to correct them): board pointing to much upwind, sail too open, and body position (especially the back foot) too far back, the latter due to the constant fear of doing a catapult (that is being lifted by wind strenght in the sail and thrown in the water in front of the board). Mario (who was wearing a short wetsuit ....) behaved better in the first part of the session with stronger wind, which was able to "pull" him out of the water, that is, to make his board start planing, despite he used to keep the stern a little to much sunk. Fox (who was lighter), instead, fared better in the second part of the session, with less strong wind on gusts, but more constant, thanks to the more correct body position (see final of the video). Fox also managed to slip the front foot in the strap for his first time.

Despite the fatigue at the end of the lesson (however, the part in the water was interrupted with a little bit of rest at the beach), the enthusiasm for being finally able to achieve this decisive "state of grace", was evident upon two guys' faces. And for an instructor, this is the greatest reward.

They have taken the right path, although, of course, they need to do even so much practice in the water to make it perfect.

And now we wait for some other guys who want to learn how to plan at full speed!

Click here, for the whole slidegallery of the day.

The video of the lesson in the water