The fins for windsurfing of the British brand K4 were introduced to the market several years ago. Innovative design, very low prices, and materials used make them revolutionary. Thanks to the collaboration of the Italian distributor Antonello Giglio from Hatropina, we got the Scorcher, Stubby and Shark II models to test. Our skepticism was blown away, and these fins turned out to be a really nice surprise.

Before leaving for South Africa, last January I made a little stock, and I decided to buy two fins sets for my wave boards from Hatropina (Italian k4, Chinook, S2 Maui, and more distributor). to be used in a thruster fins set up: K4 Scorcher Rear 18 and K4 Stubby Front 11 for my Tabou Pocket 94 2016; K4 Scorcher Rear 16 and Shark II Front for my Tabou Da Curve 80 TE 2016.

In South Africa, I only brought the Da Curve, and I had the opportunity to thoroughly test the second set of fins, which soon became my favorites, so much that I left them fixed on the board, every day. The Scorcher and the Stubby, bought for the Pocket, have been mainly tested in bump and jump sessions, on the Como and Garda lakes.

In this detailed article, we provide you with a lot of information about these fins, and we describe the impressions we have gained. To understand, in general, how fins work and how important they are in windsurfing, we strongly recommend that you read the in-depth article recently published here on Waterwind. 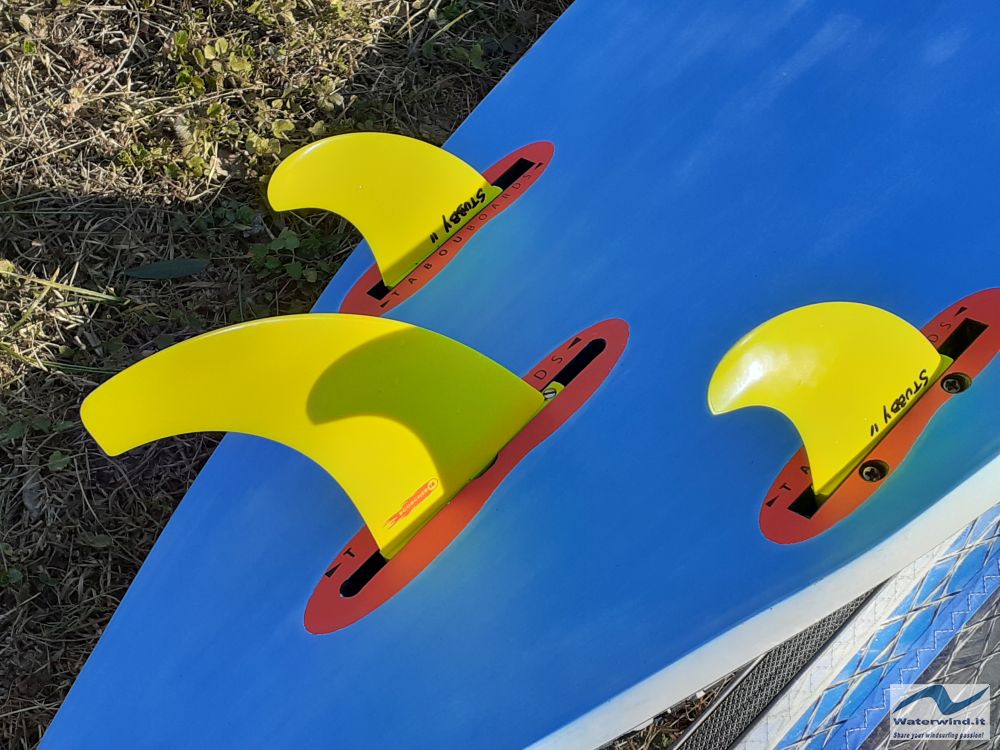 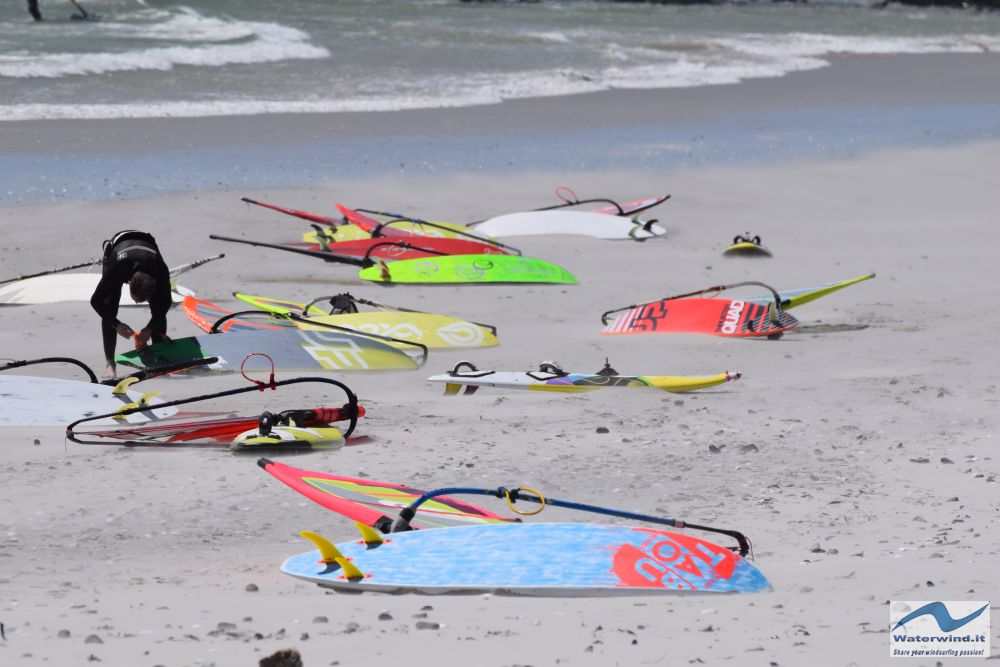 Let's start with the description of the tested K4 products.

The choice for 3 of the top 6 PWA finishers! Developed largely with the help of Adam Lewis, who was looking for a fast fin, but which still gave him heaps of grip for powerful turns. The Scorcher is your ‘go to’ fin for most conditions and boards - instant drive; excellent top speed and the grip to smash a powerful hook!

Material: Super Stiff. Available for 2016’s Leon, 3SW, Fang and selected front fins, we have developed an alternative to our original flex material that compares with the stiffness of a G10, but with faster reflex and better memory for speed, maneuverability and acceleration, making this material the perfect fit for the all-rounder Leon, 3SW’s waves, freestyle or bump and jump capabilities or for freeride windsurfing with the Fang fin. 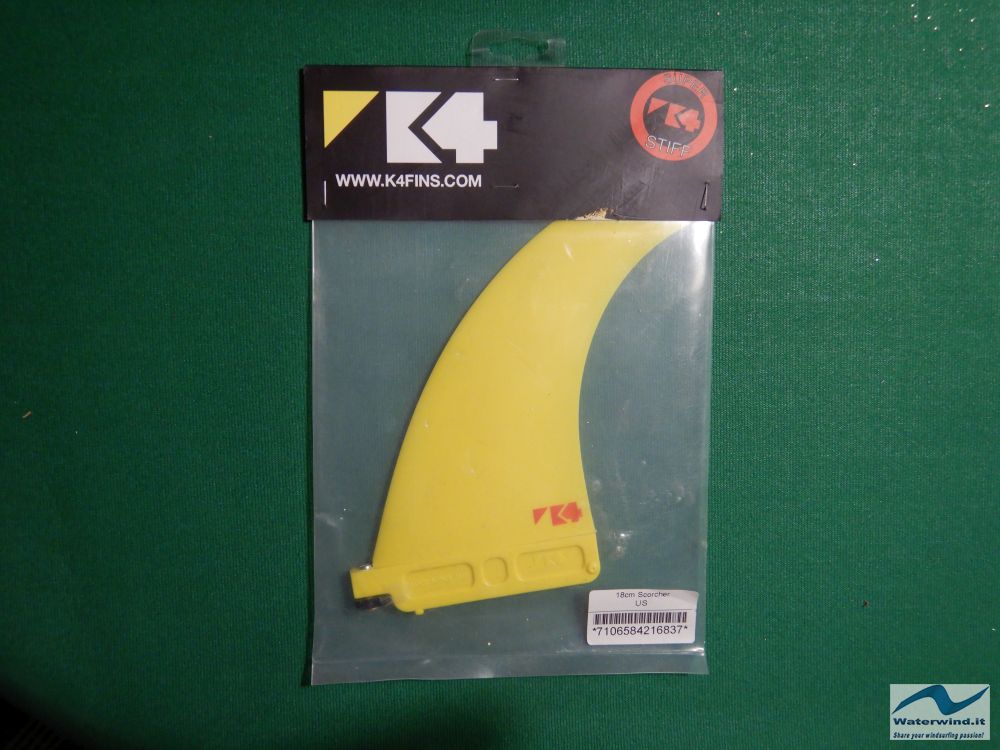 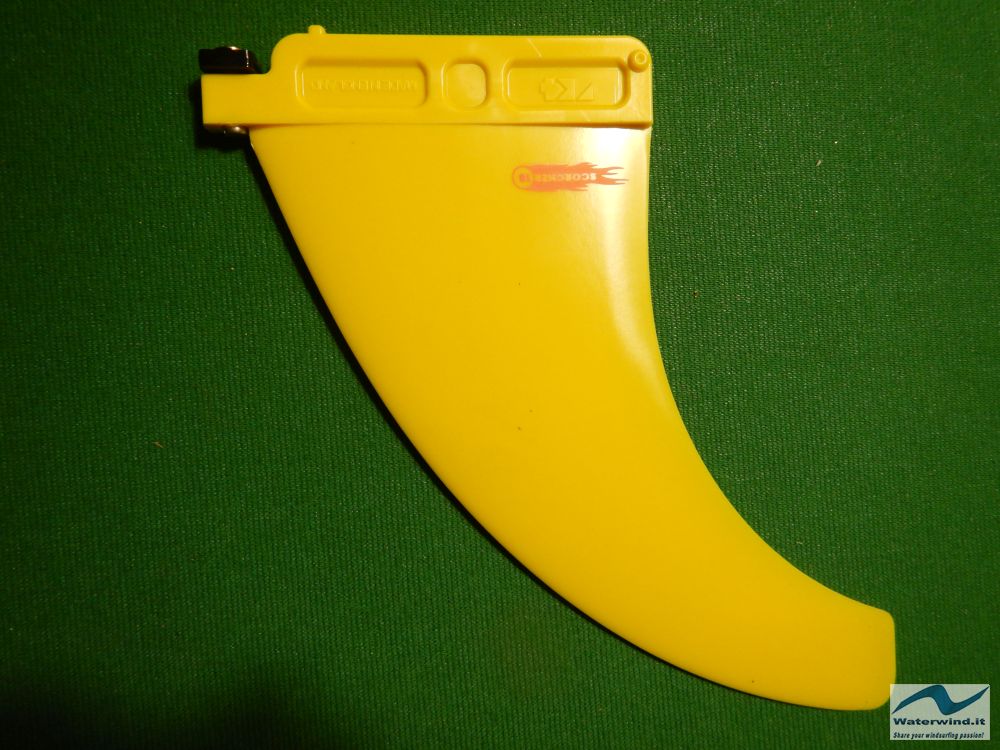 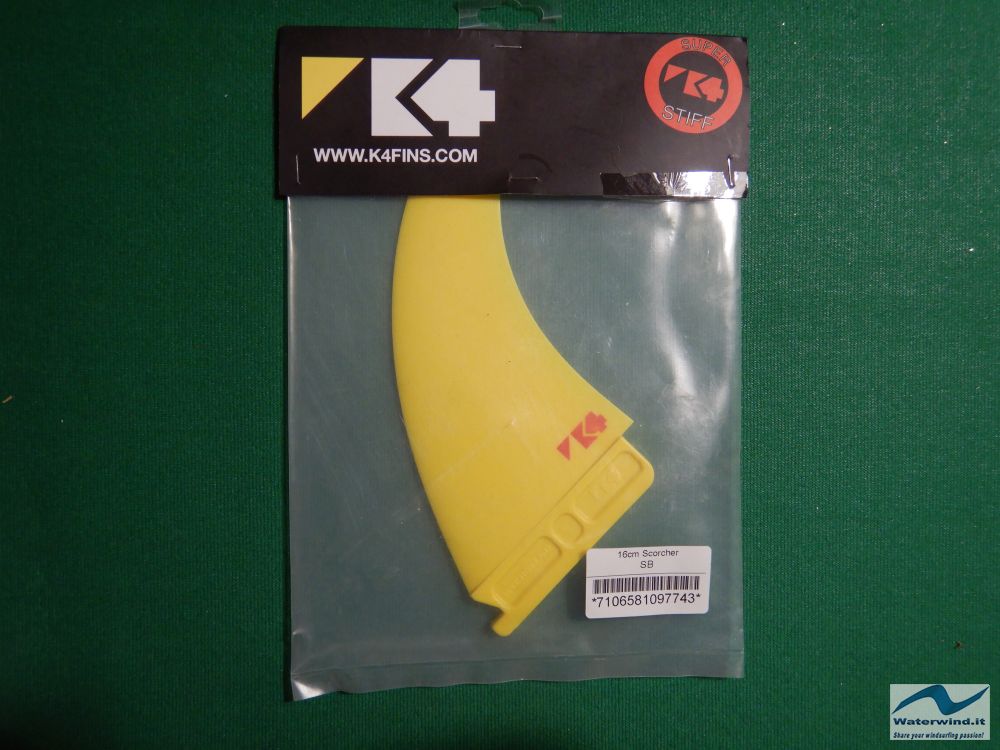 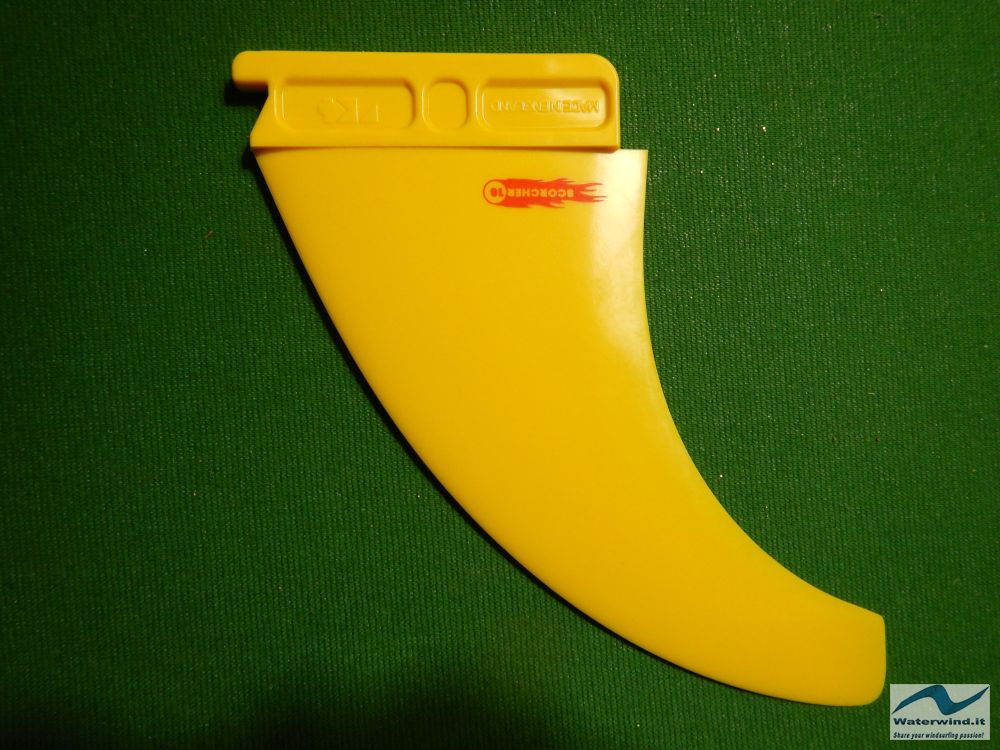 The all new SharkII fronts. Our team riders wanted a fast and grippy fin for both their quads and thrusters. So we set about designing a fin that was sleek, and with a lower tip area, using our ‘super stiff’ material. We slimmed it right down to give back some flex and grip, and widened the base to add hold and drive. The result was a fast and precise feeling fin, with just the right balance of grip and release. Already taking Alex Mussolini to a podium finish in Tenerife. Notice that the SB head will now suit both ‘Slot box’ and the new ‘Star box’ which comes with some Starboard and Severne models. We’ve also added a 1º option to the SB heads. This is for those with straight boxes who wish to add a bit of toe in for a looser feel. Also available with the new 'Star Box', present on some models of Starboard and Severne boards. 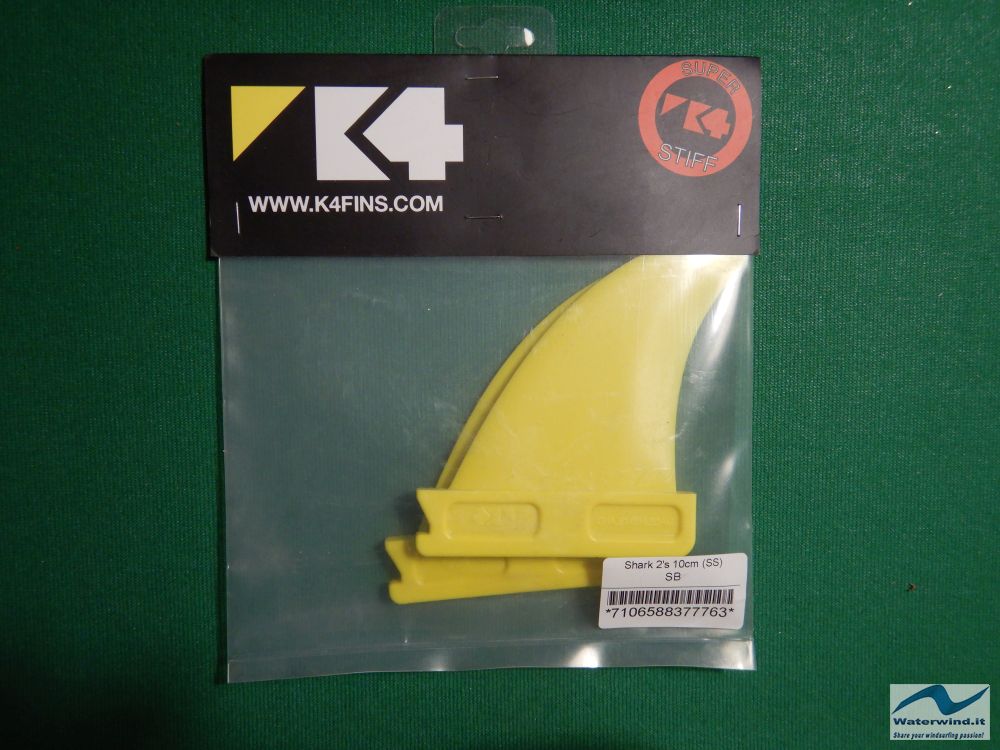 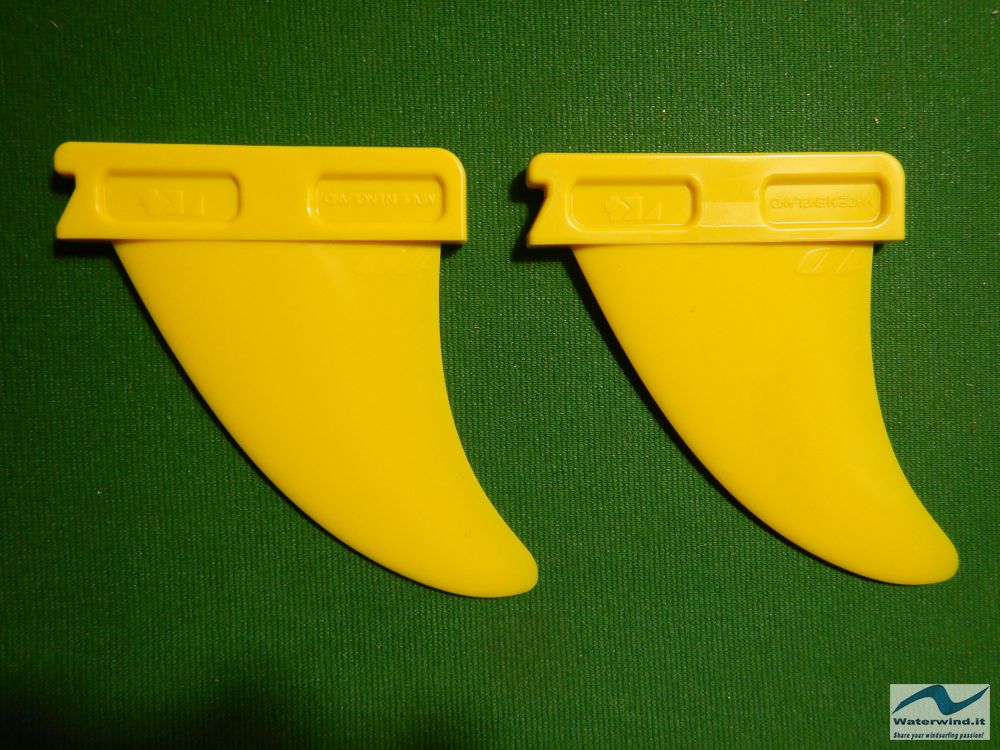 Our larger area line of front fins for riding. These are best used for tri set ups, but also work well as quad fronts, or trailer rear. Moulded in ‘Dynamic Flex’ for grip and looseness. Also good for those who choose to use the front and rear fins of very similar dimensions (e.g. 12 front, 14 rear).

Material: Dynamic Flex. K4’s classic Dynamic Flex material, with the black logo, gives flex that works with the power you’re putting in, allowing you to drive hard and fast, and giving power back for turns. Its ability to flex and spring back to its original shape means crazy grip at extreme angles of attack and epic round house turns. The flex makes it easier to crank back up hard at the critical section, then gouge or power through the lip at full velocity. 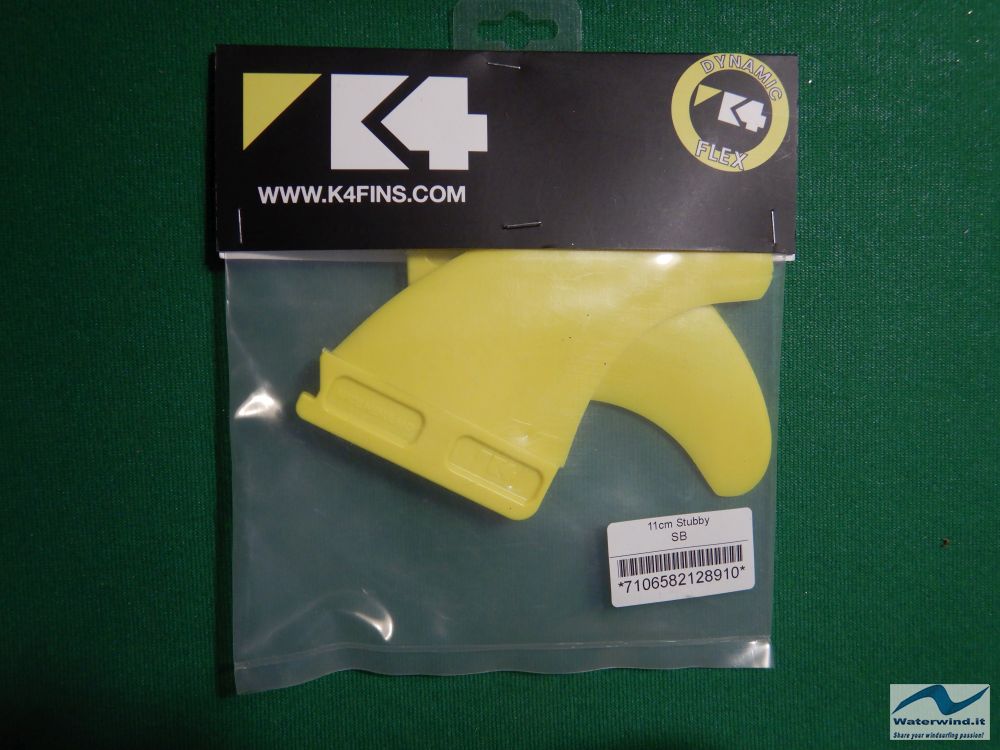 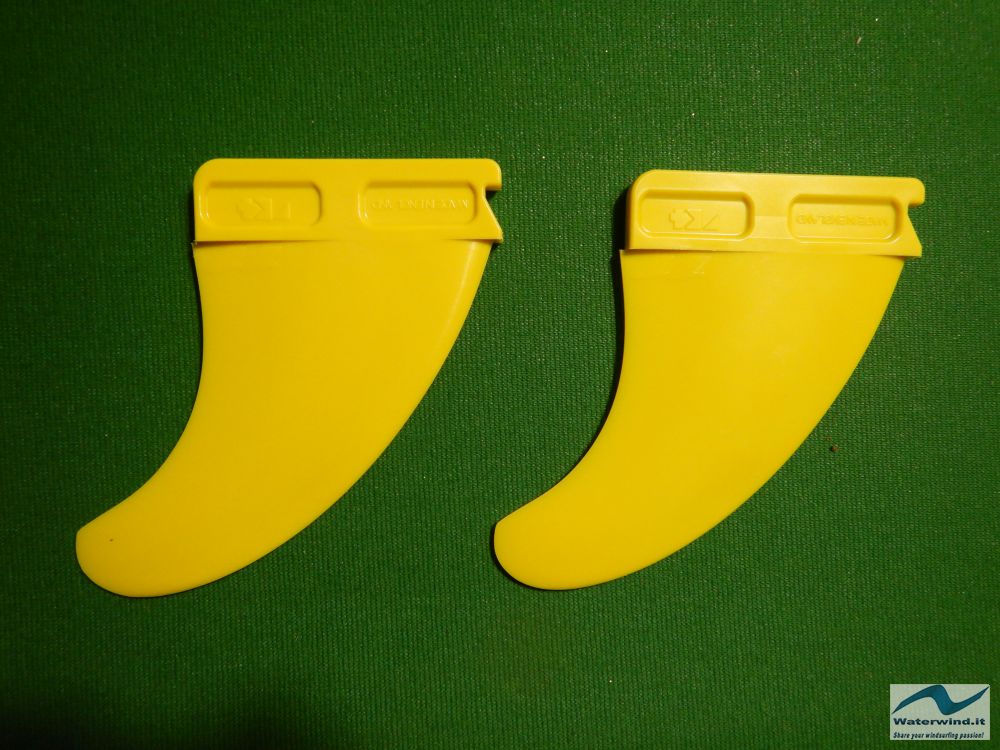 I also find very useful to report the advice that Antonello Giglio from Hatropina gave me, and which guided me in my choice:

"So, as for the fins, I would say that the choice is excellent, in the case of the Pocket 94.
On the Da Curve 80, perhaps, as for side fins, I would try the SHARK II, rather than the Stubby, because the Stubby is a fin which guarantees very much lift, with a wide base that helps in marginal conditions; therefore, it is ok with a big wave board and with little wind. In the case of the Da Curve 80, I assume you use it in strong winds, so the fin can be less powerful, and with less area, this allows you less drag and more freedom in maneuvering, surfing, carving. The Shark II has these characteristics. Personally, I use it on medium and small wave board (quad) and it is very good; I match it with Scorcher, too ".

Test in the water

The Scorcher 16 and Shark II 10 fins with the Da Curve have been abundantly tested in the recent trip to South Africa in 2020 (read all reports).

It is not easy to describe the sensations that the Scorcher and Shark II give on Da Curve. I should let you try it.... At the risk of giving a somewhat emotional description, the board seems, at the same time, to keep the route well, feeling however soft underfoot, and free and precise in the changes of direction, be it a simple jibe, or a bottom on a wave.

Since the first tests in the water, the K4 Scorcher and Shark II fins immediately started to surprise me positively, especially with strong winds: when sailing straight they make the board pleasantly soft underfoot, more in control (a circumstance that I appreciate very much), thanks to the good lift of the Scorcher, and the Shark (when the latter work completely sunk - see wide base chord). The glide start is also good, as the top speed (even if this is not the peculiarity of these fins), and the ability to make the board sailing well close-hauled, if the wind is not too gusty. These qualities are however also due to the Tabou Da Curve, which excels in this respect (read review). With these fins, the board was also very responsive, and fun when turning in the waves, be they small or big. The Scorcher continues to guarantee lift, while the Sharks make the board a little freer (see less tip surface, and thinning in this area).

When under the Da Curve there are these fins, I enter the water confidently and happily (as if I had a good old friend with me). Promoted with flying colors (although, initially, I was a little biased - I confess it).

The Scorcher 18 and Stubby 11 fins with the Tabou Pocket, so far, have been tried in bump and jump sessions at lakes spots, with strong winds (also with 35-40 knots and 3.7 sail). The relatively generous surface of the two types of fins guarantees lift, and therefore the fins give a good grip when sailing straight. However, even with this set of fins, the board remains softer underfoot, well enduring even overpowering conditions. When I use the Tabou Pocket, with the MFC Freeeave 23 2020 fin, in single fin set up, the board is very fast and more easily overcomes wind lulls; but it gets hard underfoot, when I have to use sails smaller than the 4.7 (although to be honest, it is obviously anomalous that I use the Pocket 94 with the 3.7). However, the glide entry remains fast even with the K4 (also in this case, the merit is also due to the board - read the board review). The area of ​​the Stubby also guarantees good grip when bearing away and carving, when going to jibe, making the maneuver smooth and pleasant.

The test must be completed with a few sessions at the sea, with small waves, to evaluate the performance of these fins set up in waveriding. We will update the evaluation as soon as possible.

Here are some links to some useful manufacturer website pages:

Here you will find the list of riders, including a certain Tomas Traversa ....: https://www.k4fins.com/riders/