The Costa da Caparica, in the Setubal peninsula, just south of Lisbon, is perhaps not well known for windsurfing as the Cascais area. But, probably, it would deserve greater fame. Infact, in addition to offering several spots, often right also for beginners/intermediate level windsurfers, in the swell days, it guarantees an exceptional wave quality, perhaps even better than one of other more famous spots. We have tried Sao Joao da Caparica.

Sao Joao da Caparica is located 30-45 drive from Lisbon (1 hour from Cascais). To get to the spot (see map in the article), you must reach the Estrada da Raposeira, in the municipality of Trafaria, and follow the road signs that lead you to Praia do Sao Joao. Exactly, you must arrive at the entrance of the paid parking (at least in the summer is not free - see photo below, and map), which is located along the Estrada da Raposeira, after which you will drive along an avenue (about 600 meters), which crosses the coastal pinewood and leads you to the dune, immediately behind the beach. At the end of the avenue, you will find the parking lots (see map), well organized, and sheltered from the sun by covering sheets. The area is very pleasant. In the hinterland of the pinewood, the area is urbanized, but quite tidy, and without excess of building speculation (however, it is not as beautiful as the Cascais area). The buildings are, however, far from the sea area, which, therefore, is rather quiet (although the wildest part of the Costa da Caparica remains, the southernmost one). 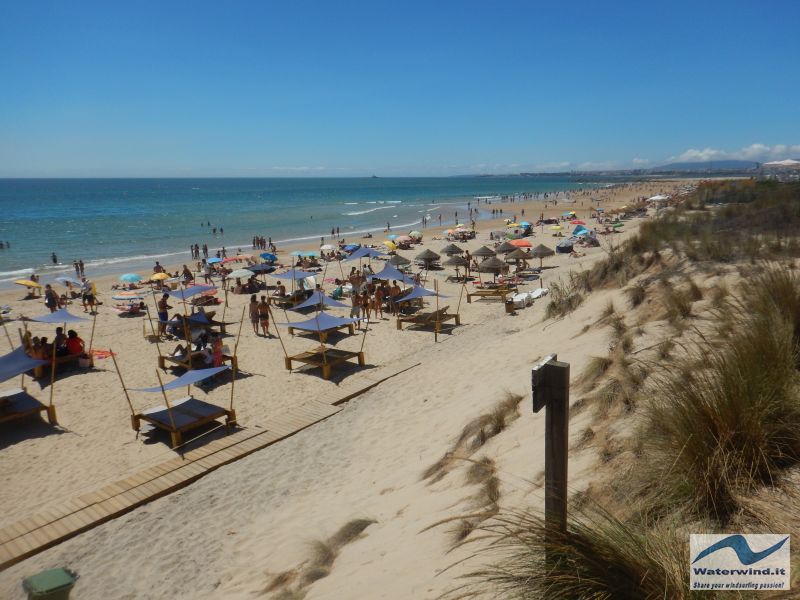 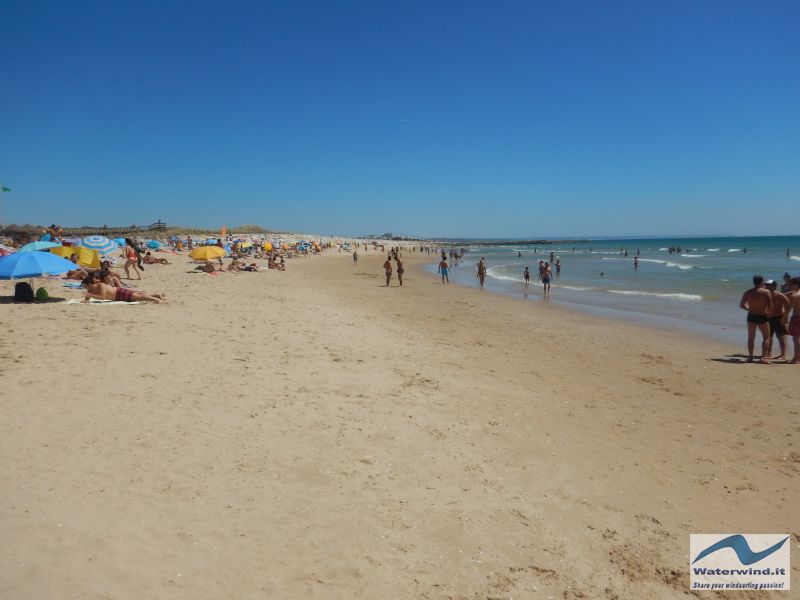 Once you have parked the car, you can access the beach through the usual wooden walkaway that goes over the dune. Here, as in many other beaches of the Portuguese coast, you will find some bars with terraces - open in summer, pleasant for a snack, for lunch, or for a drink at the end of the session.

The Costa da Caparica is characterized by a very long beach, almost 25 km, which ends just before Cabo Espichel, and begins from the Tejo estuary. The praia of Sao Joao is one of the first to the north, then the beach take other names, although, in reality, it is the same uninterrupted beach.

In Sao Joao, the beach is a hundred meters deep.

The Sao Joao spot works with wind from the North - North West. In the period from May to September-October, the spot is hit by the typical thermic wind blowing on the Portuguese coast on hot days of good weather (the so called Nortada). Here, however, the Nortada is less strong, and less frequent than the spots in the Cascais area (eg Praia do Guincho - click here, to read the review of the spot, here on Waterwind).

Therefore, a reinforcement due to perturbation air currents from the North, highlighted by the weather maps, certainly helps to have wind of a good intensity. The thermic wind increases in intensity in the afternoon, and often has a reinforcement in the late afternoon. It blows Side or Side off (this direction, in particular, occurs when it is very hot, in the early afternoon, according to what we have been said on the spot), and may be less strong, or more unstable near the shore (first 100 meters), and stronger off. If the Guincho, however, is too challenging for you, because there are beyond 40 knots, this spot (in addition to Ericeira - just north of Guincho - but more challenging), can be a very valuable alternative, to enjoy a more reasonable Nortada. 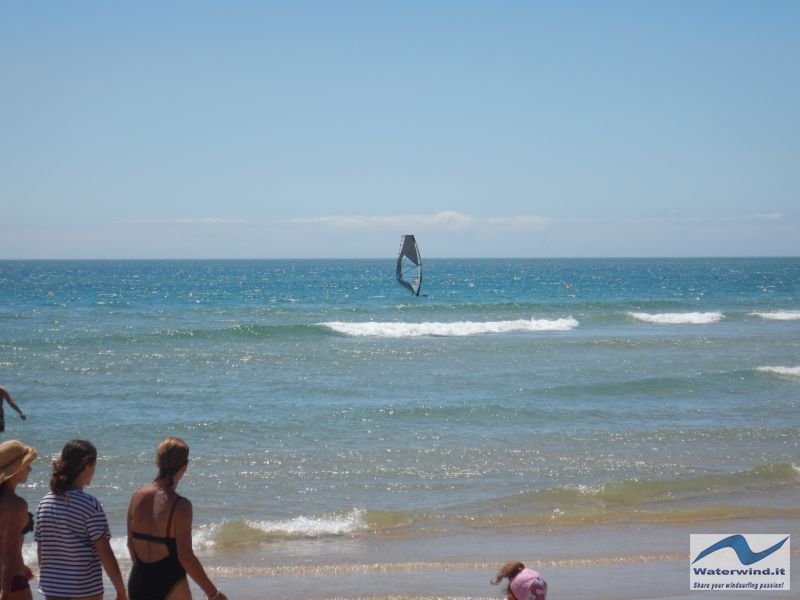 With the thermic wind only (and no swell, therefore), given the direction from the inland, the sea here is almost flat, apart from a rather modest shorebreak on the shore. Therefore, in these conditions the spot is perfect for freestyle, freeride and slalom, but also, remaining close to shore, perfect for beginners.

In summer, the area is crowded with swimmers, and a corridor is set up for the exit and the return, which you are invited to respect. Anyway, except for particularly dangerous behaviors, especially near the shore, you will not be blamed by the lifeguards if, in case of difficulty, or unfavorable wind direction, you can not strictly respect the limit marked by the buoys. The beach, as in all the rest of Portugal, is basically public, and therefore free, and only a limited portion, farther from the water shoreline, is given in concession to bath facilities.

With swell due to low pressure, sometimes also present in summer, but more frequent in other seasons, and if there is wind too, the spot can be really amazing, with regular and clean waves (as shown in the video at the end of the article), which, if they are not too big, are also suitable to learn waveriding safely, since the beach is sandy (do, however, pay attention to the artificial cliffs perpendicular to the shore, which are downwind to the spot).

On http://beachcam.meo.pt, you'll finde some webcams of the spot. 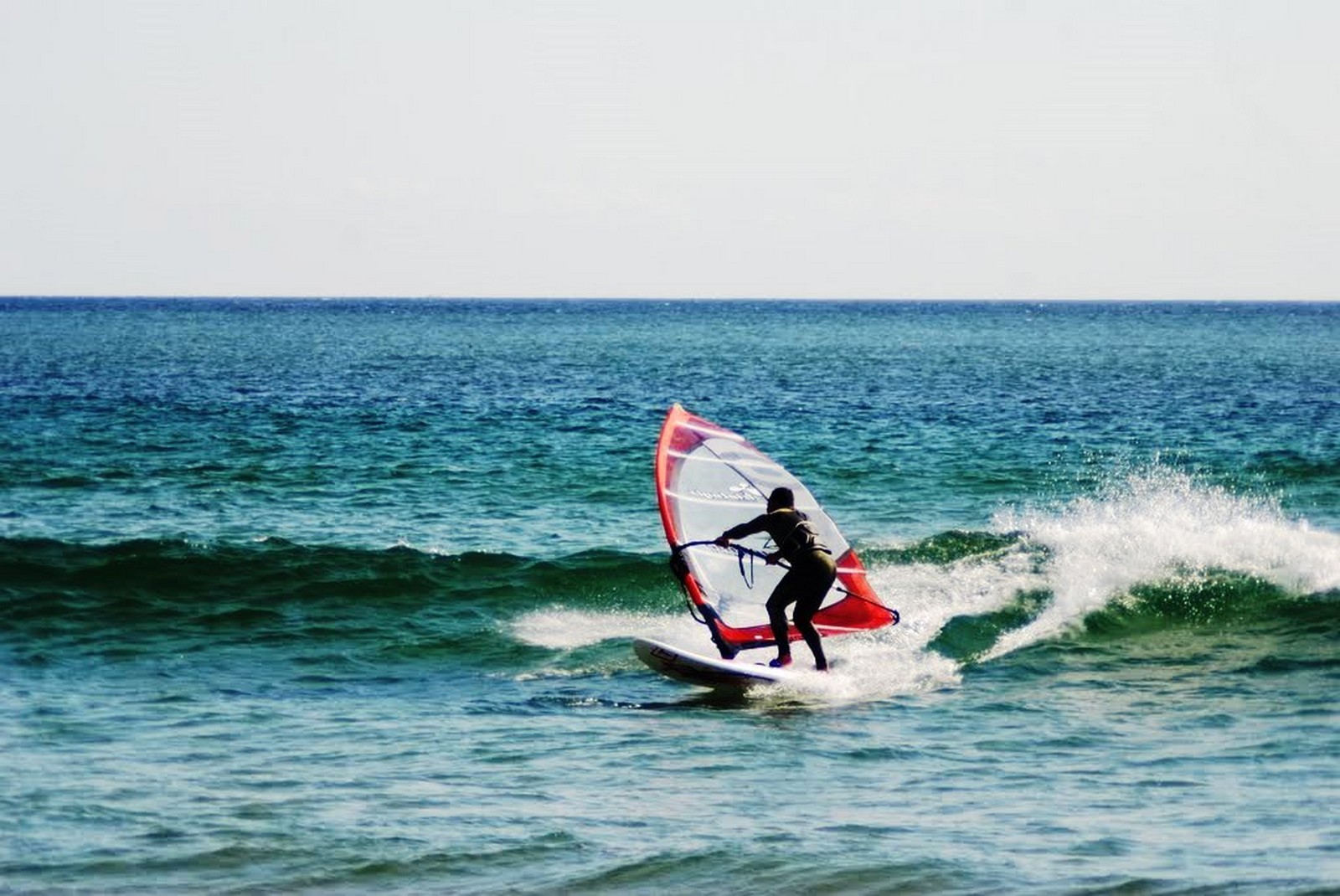 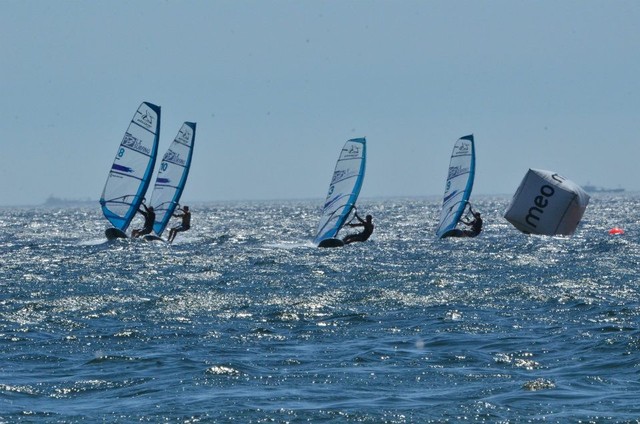 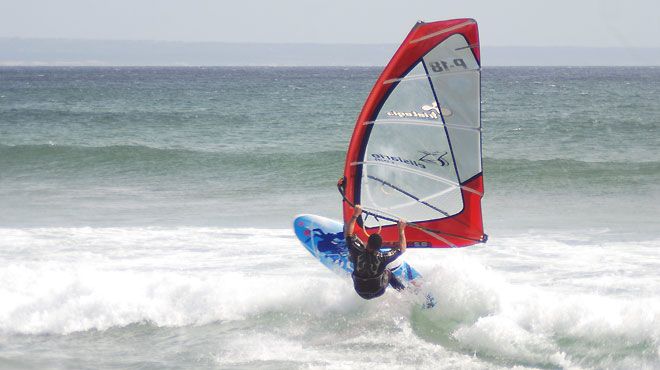 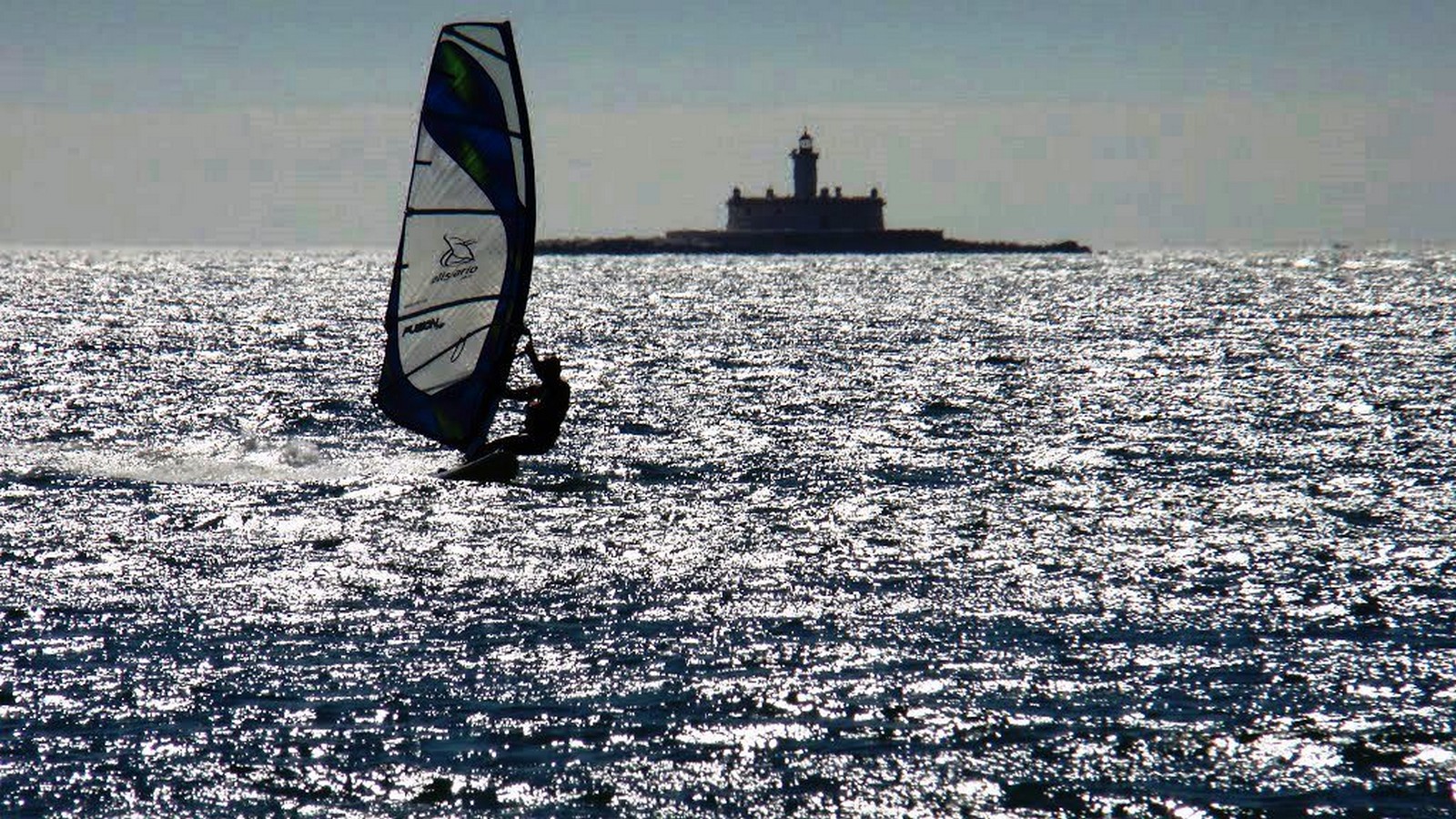 On the spot, during the summer months (until August) you will find Elisiario Carvalho's windsurfing center, where we went for renting. We appreciated their service, and spent a reasonable amount of money (35 euros, for the rental of board and sail for two hours - prices 2018). The school also operates in the nearby Cova do Vapor (see their website for the exact location of this spot). Outside the summer time, the center on the spot is closed, but Elisiario, if you contact him in advance (see their website), is available to rent windsurfing equipment (if you are in group), and bring you on the spots in the area with his van. 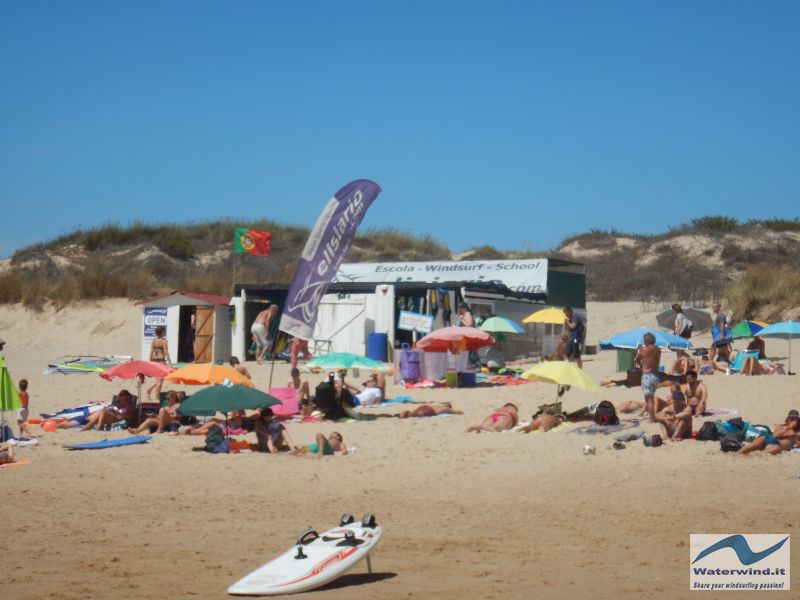 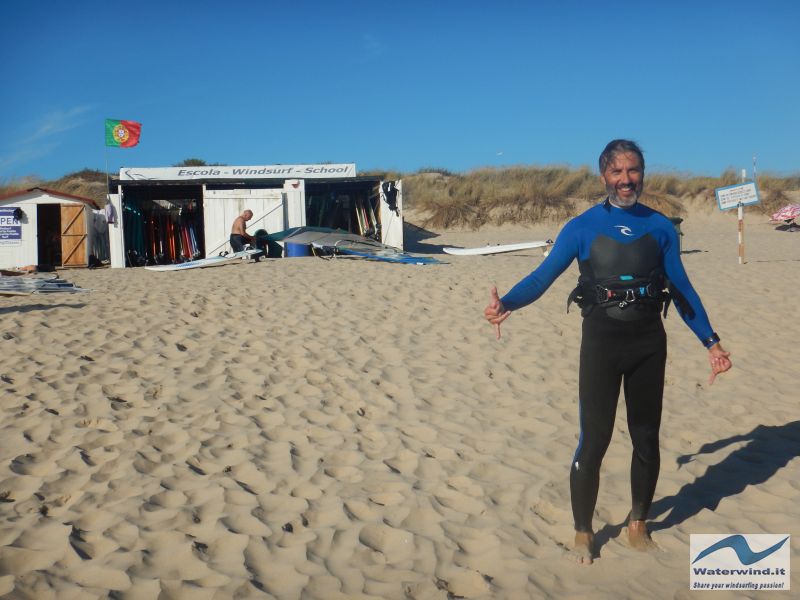 For accommodation, you can sleep in the area of Lisbon/Cascais, and come here in the day, as we did (especially out of summer), or you can sleep in villages near the spot, which, at least in summer, are lively, even if, we repeat, not as beautiful as Lisbon, and above all as Cascais (click here, to read the report of our holiday in Portugal in July 2018). You can search for accommodation, on booking.com, by checking in the box at the end of the article.

Incidentally, even if we have not tried, we point out that along the southern part of the coast, there are, in correspondence of the other beaches, as many spots (in summer, along the coast, a small train provide service), which enjoy similar conditions, except for, given the orientation of the beach, being hit by a more side on wind (and maybe a little more windswell).

The southernmost beaches, which are wildest (some of them frequented by naturists), are more Kiters kingdom. When we were in the area in summer time, we also checked Praia da Rainha, finding similar conditions to those ones of Sao Joao, except for, being there no windsurfing center, it looked less frequented by windsurfers. In the middle of the Costa da Caparica, there is also the Lagoa da Albufeira, which offers flat water conditions.

Click here, to see the complete slidegallery of our holiday in Portugal, in July 2018.