Marco Quattrina, windsurfer from Lake Garda, had the opportunity to buy and test the Custom Mojo Tweak board. In this article, he tells us about his impressions.

After a long season of tests, trials and other people's opinions, I decided to write this article related to:

PURCHASE OF A CUSTOM MADE BOARD.

Following a series of online searches, also considering the growing success, at least here on Lake Garda, of an brand (Flikka) which also, and above all, produces custom boards, I decided to buy one for myself.

A BIT OF HISTORY

If someone is bored or disinterested about this subject, he can skip this paragraph.

Since I have been an assiduous and passionate practitioner for over three decades, I have experienced the Funboard phenomenon from the beginning (as the kind of windsurfing, that we all practice today, was called).
At first the manufacturers, not believing in only planing boards (without retractable central fin), produced a few models of this type and of rather important sizes, so the market dedicated to medium/strong winds was the total prerogative of the custom made shapers (who took some advantages); the main disadvantage was the cost, much higher than mass production.
Then, first the main manufacturers (Mistral, F2, Fanatic), and all the others then, began to offer suitable and ever better models. As a result, the custom made in a handful of years have gone out of business (except for a few diehards fellows).

Today reality is reversed.
That is, mass production, very articulated, diversified and (in some cases) sophisticated, has reached very high and not always justified economic demands.

Current custom boards are built better, with more valuable materials and in many cases at costs significantly lower than mass production.
As far as I'm concerned, there are several considerations that prompted me to have this (very positive) experience. After having owned several series fsw (and wave) boards, I had a clear idea of what I would expect from a new custom board: the full barrel and the drunk wife…
Therefore, an immediately planing board, very manoeuvrable, with abundant volume (given my size), and which did not suffer in strong winds (over 30 knots). In practice, I wanted to start planing with a 5.3 wave sail of 17/18 knots, I wanted to gybe with short radius, with a 4.7 or 4.2 sail, with a wind ranging from 25 to 35 knots, and I also had (and do have) precise ideas about the measurements, the shape and the chromatic choice. Series boards available with similar features are very few and very expensive.
I found a Hungarian brand online that immediately inspired me confidence: Mojo (mojoboards.hu), very happy choice (so far). 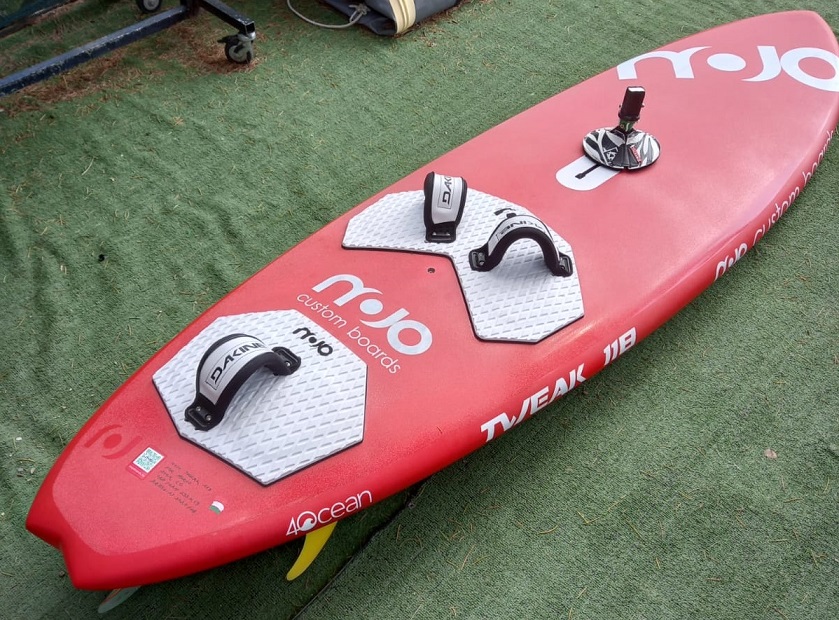 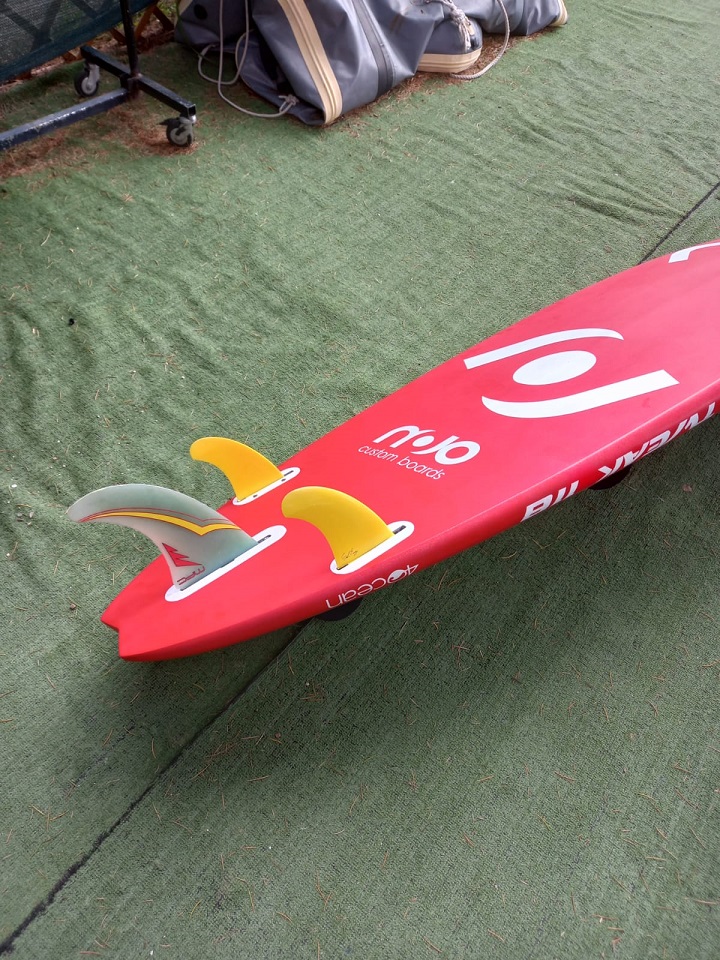 Mojo, like others, has a small series production, i.e. with defined shapes (wave, European wave, fsw, fs, etc) in various sizes with the possibility of choosing both the more or less sophisticated construction (with different prices), and the aesthetics (with a further surcharge only for complex colors and designs); for the rest, the choice is still wide and articulated.

My preferences could be summarized as follows:
- European wave shape (named by the manufacturer Tweak)
- volume greater than 115 litres
- thruster, us box short and 2 slotboxes (the brand says the boxes are carbon made)
- swallow tail, aesthetic choice only, no technical reason
- Rock SG technology, the strongest (the weight is not higher than most wave or fsw boards of similar volume)
- traditional valve (no goretex)
- 2 front and 3 rear straps positions (each strap has 4 screws, supplied)
- single color with contrasting pads, logos and writings.
- measures 235x69
Estimated delivery time: 70 days.

I received the board within the promised times, by courier and very well packed, accompanied by 4mm Allen screws (more than needed), relative key, stickers of various sizes (also for sails) and a Mojo t-shirt; I didn't want straps or fins (I have a fair amount of them). I equipped the board with a Dakine Core Contour set (each strap has 4 fixing screws that prevent it from rotating), my favorites, the pads provided are wide and thick (9/10mm); after several tests, a 14x2 thrusters + 23 central wave fin combination.
The board, after a couple of sessions to get familiar with it, has fully met my expectations. With the wind at the lower limit (at Pier spot, Lake Garda, with Ora Wind) I plan with the 5.3 (previously with the 6.0); but it is with more sustained winds (20/28 knots) that it becomes truly exciting: the volume is not felt and the board glides fast on medium-small waves without bouncing or suffering, it turns like a real wave board, and sail upwind very well, impressions widely shared by other riders of a similar weight to mine (95 kgs), who reluctantly returned it to me. 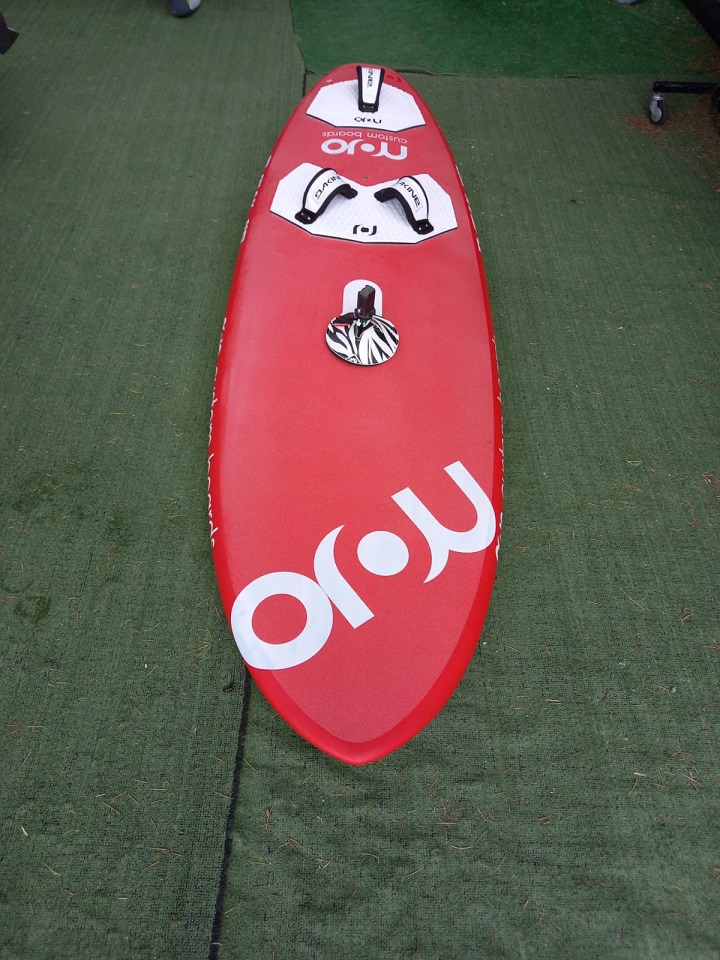 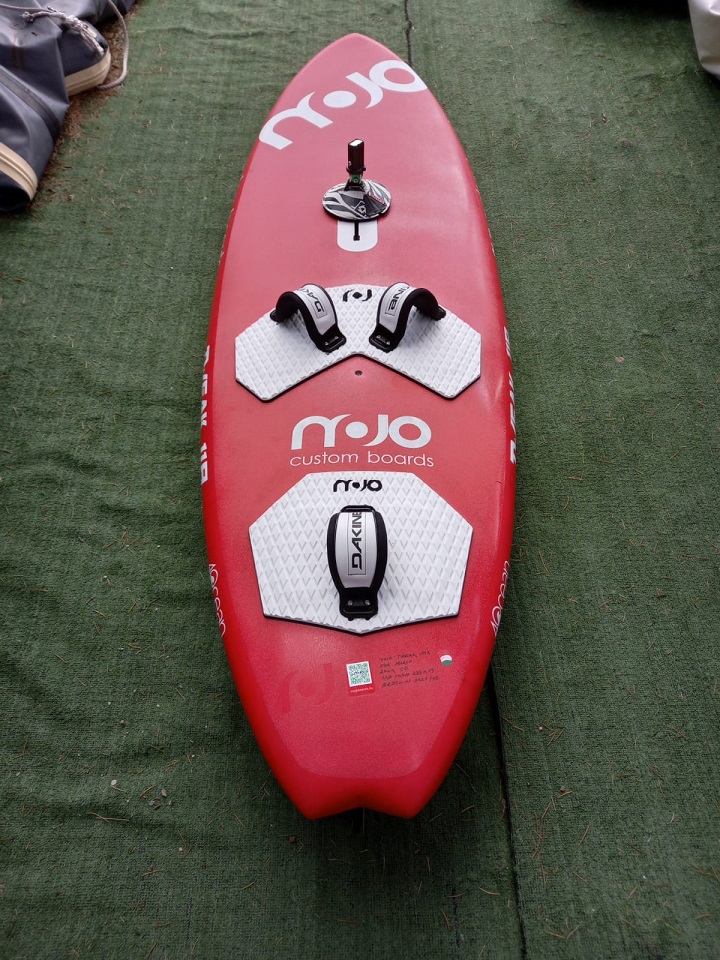 The downsides (few).
When ordering a custom, it is imperative to have clear ideas about what you want and what to expect; therefore I advise against this kind of purchase to those who are not yet sure in practice, or confused about the type of board (and use) they prefer.
The resale of a custom could be problematic (many will want to try it, since there are no reviews, obviously) or economically disadvantageous (but after 4/5 or more years, all boards have a similar value, if in good condition), it is true however that the purchase cost is at least 4/500 € lower; so…

I was and am very satisfied with my choice, and would do it again.
Mojo's shaper, Bertalan Csik, was very helpful and exhaustive (and very patient) with my doubts and my wishes (via e-mail, in English), he first sent me a rendering, and then several photos of the board out of the paint oven.
I don't think I have anything else to add.

P.S. I have, instead; but that will be another story…