Plenty of wind indeed ... Today, at Prà de la Fam, Lake Garda, his majesty the Peler went on stage with his best suit. Wind from 7.00 to 12.00, for a really funny windsurfing session! And to make matters even better, I had the pleasure of filming Simone Grezzi's show.

Lake Garda has been giving Peler wind almost every morning, in the last ten days. Sometimes stronger, sometimes only twenty knots ..... During the week, I regret for having lost some of the best last Peler days. Today, I finally managed to catch a good Peler between 25 and 30 knots, which didn't want to stop blowing anymore.

In these days, as promptly announced in the forum of Waterwind, we are having the perfect conditions for the genesis of morning thermic wind at Northern Italy Lakes.

Upon my arrival at 11.00 pm, on saturday night, the parking of the Prà looked like a camp .... and I was lucky to find one of the last free places to park the car. In Germany, they must have postponed the schools start, or doubled the vacation days, because the Germans are still here all on vacation!

When I woke up, in my car, just before 7.00, I noticed that the wind had almost reached the Prà beach, and someone was already beginning his/her session. Abnormal, and excellent signal .... I also gave a look at the anemometer in Malcesine, where the wind always comes in first, and I saw that there were already 20 knots there. I said to myself: good Peler for sure even at the Prà. And, therefore, I immediately chose to prepare the Fanatic Skate 93 instead of the Tabou 3s 106. I had some more indecision for sail, because the wind at the beach still came gusty. Then, I decided for the Ezzy Elite 4.7, trimmed for medium wind. 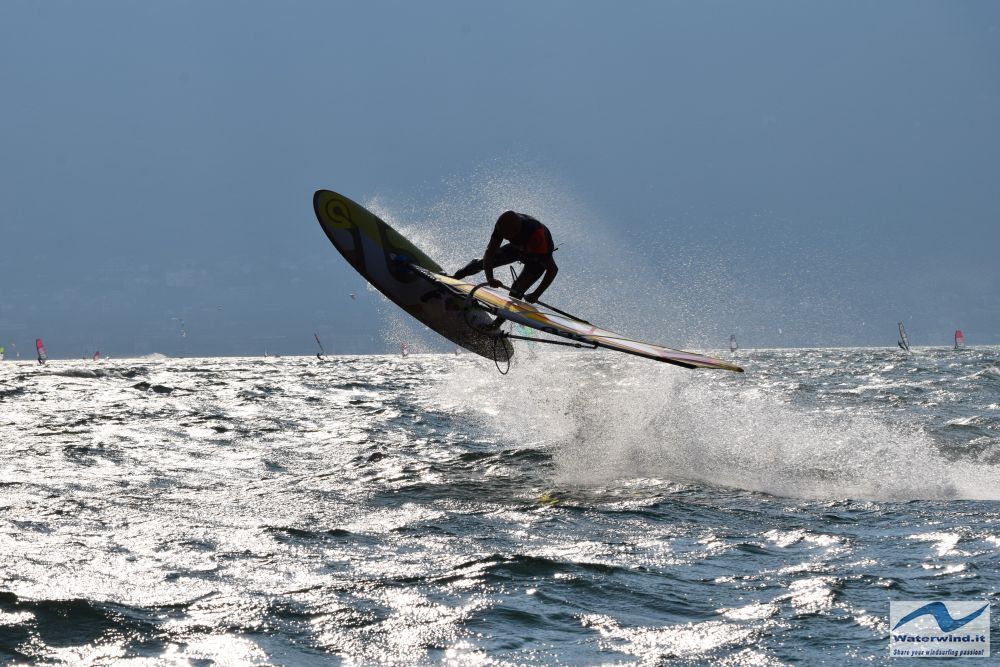 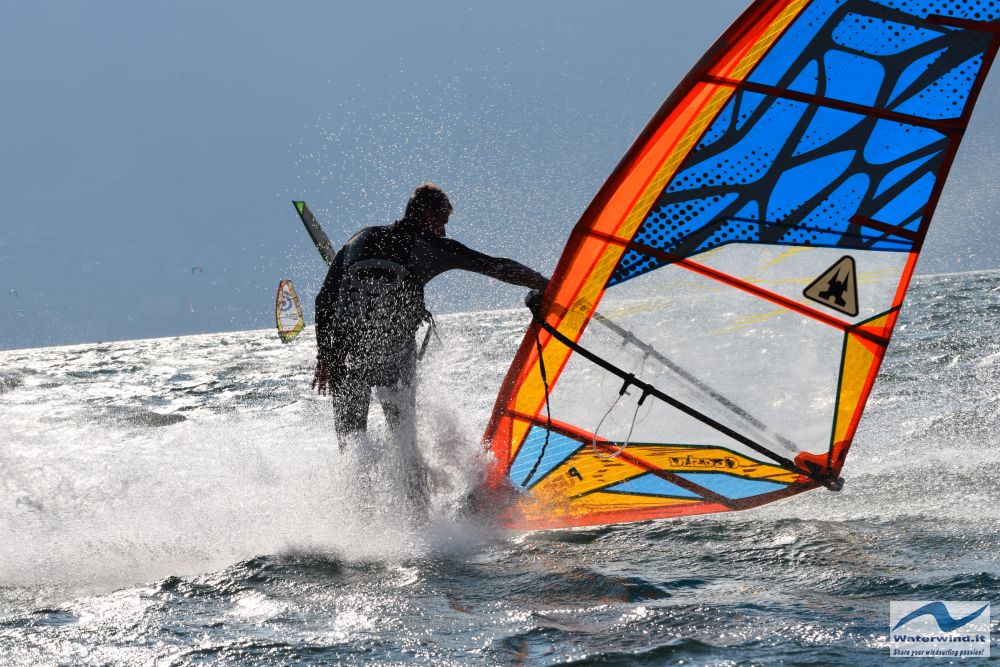 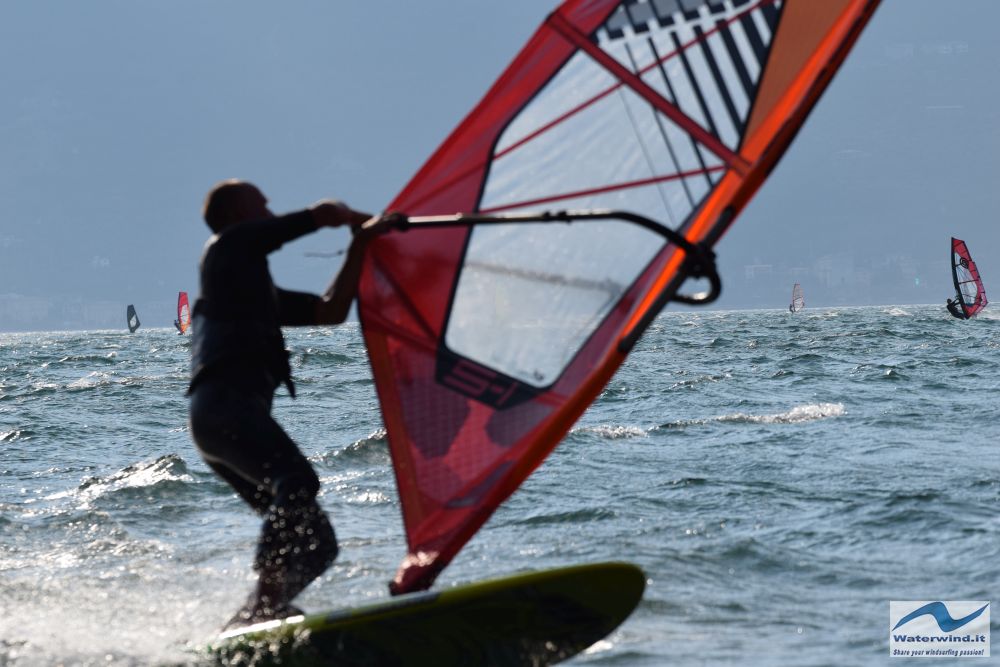 At 8.00, I entered into the water. The first thing that impressed me was the water surface. The classic long waves of the Prà, regular, which are a funny for jumps. I had missed them for a long time. I would have preferred to have my wave board under my feet, or at least a Freestylewave, instead of a freestyle one. Anyway, the water level, during the rest of the morning, became a little bit choppy, because affected by the many windsurfers traffic, but offshore, after all, you had always the possibility of catching some beautiful waves (less than one meter, anyway).

The second thing that struck me favorably was the temperature of the water (as well as that of the air): despite having come out in shorty at 8.00 in the morning, I was absolutely not cold. And I fall often ...

After half an hour, when the wind had further reinforced (as always at the Prà, when the sun enlightens well the cliffs, above the spot), I found myself overpowered with the 4.7. I should have rigged 4.2, trusting the above mentioned clues. But I said to myself: resist for an hour, and then, when the wind will drop a bit, you'll be right powered. Yeah, but it didn't drop.... I was overpowered until 11.00am! Only when I came out of the water at about 11.15, the wind began to give signs of weakening ... 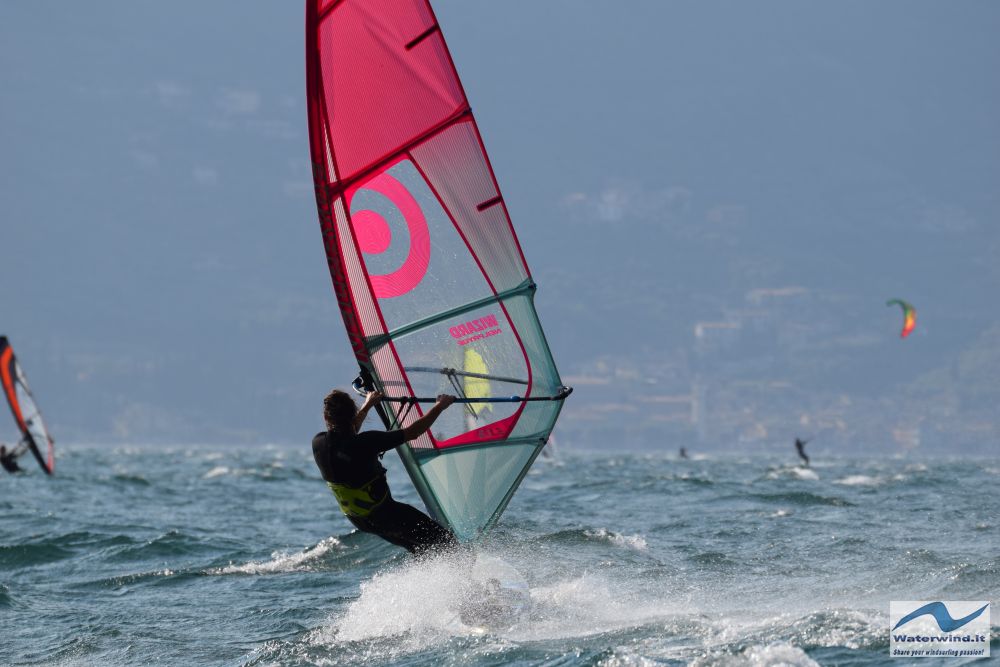 However, the session was a lot of fun. A decent physical training, and the freestyle board allowed me to resist to overpowering conditions. Of course, the conditions have penalized performances when maneuvering,

The spot, in the water, was crowded, but only near the shore one had to be very careful. Today, however, there was the Gorla Trophy (a sailing regatta preceding the Centomiglia, to be held on 7-8 September). Towards 9.30 - 10.00, therefore, there was the passage of the fleet, and it was necessary to pay a little attention because boats sail choosing the route they prefer, and they are big ... But, all in all, the problem did not last long. 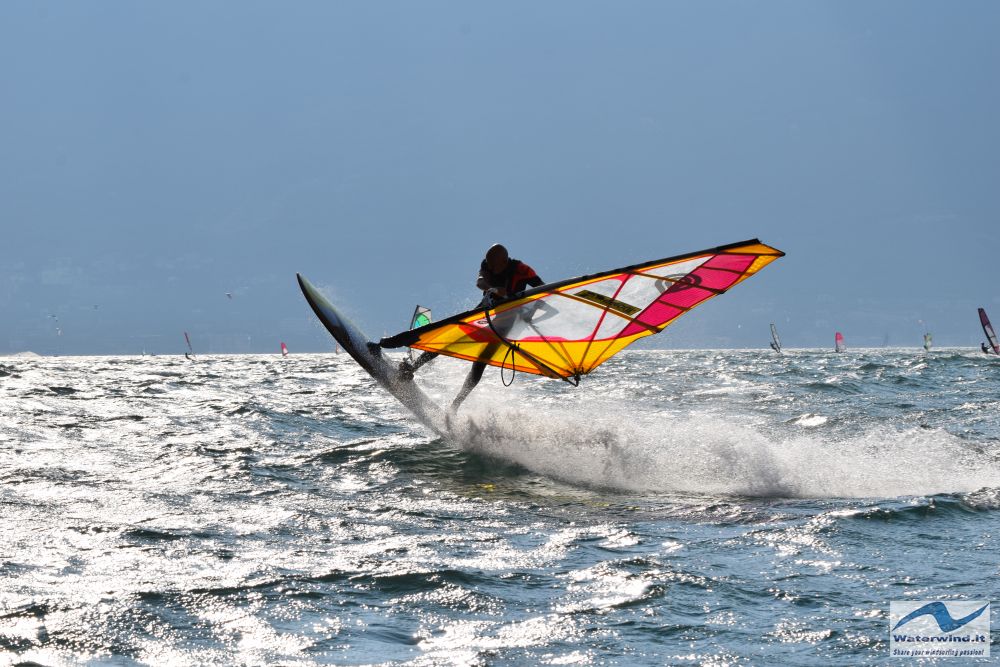 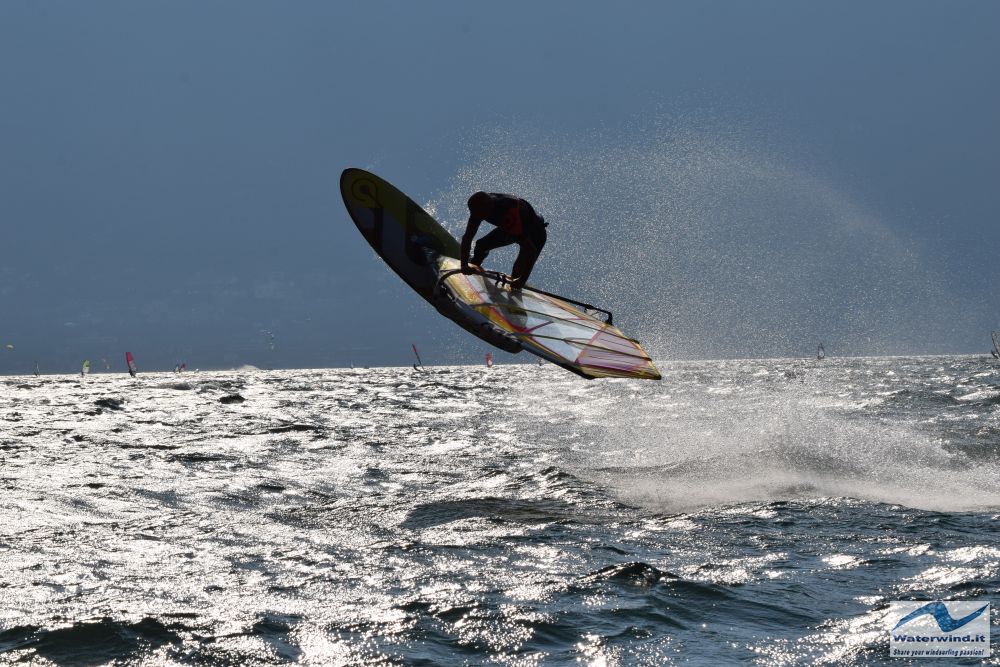 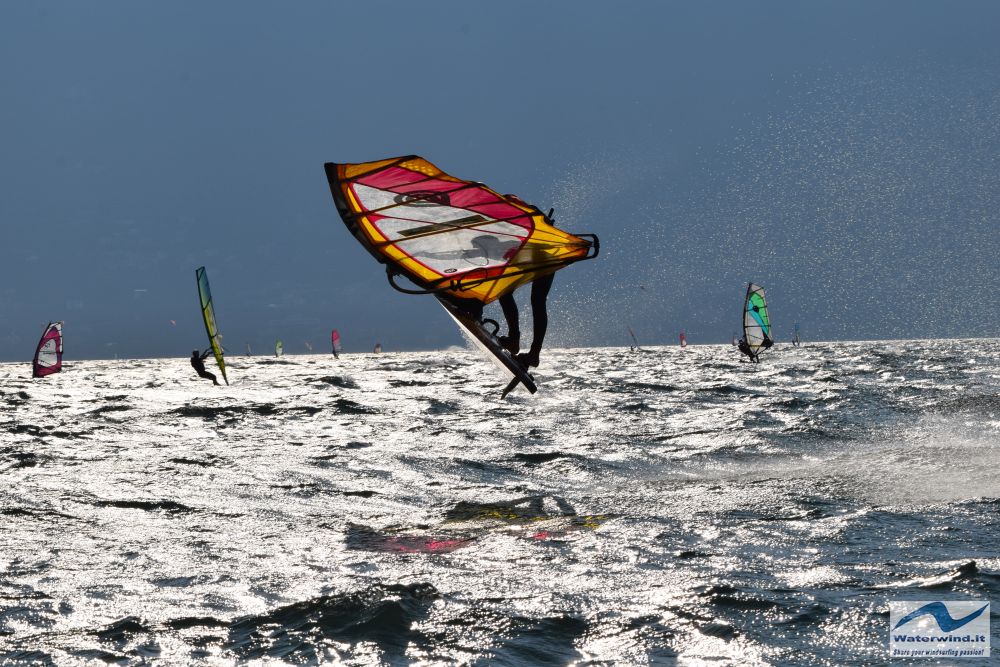 In the meantime, I had put on the helmet with the GoPro, and Simone Grezzi, a talented local rider, who I had already pictured from the beach in a spectacularly beautiful and high Shaka, involved me in a rather amusing game (see video below), which was also very instructive, because there is always something to learn from the best riders. We started to ride together, Simone first, and me behind. Simone started to perform some forward loops before my eyes, one after the other, alternating with some Shakas, and other nice stuffs ... Simone was in the water with a Goya Air 89 L and a Goya Banzai 4 (with 100% Goya mast), and it was not easy to follow him. He was very fast, also because, to jump properly, he was looking for a high top speed. My overpowering actually made me go slower (and this says a lot about the right choice of sail), because if I sheeted my 4.7 sail, I took unmanageable speeds for my knees and legs .... Simone also gave me the proof of how you can jib narrowly with a freestyle board, when needed (briefly going upwind, and then doing a sort of slam jibe), or how you can jibe, again with a freestyle board, at full speed, laying down the sail, even having both feet in the straps, changing his position in an instant when he was already on the new tack.

He also reminded me of the importance of keeping your arms extended at shoulder height in a fast tack (I am often wrong about that). At 11.15, I came out of the water, even if my brain didn't want. Unfortunately, my muscles no longer listened to the brain! 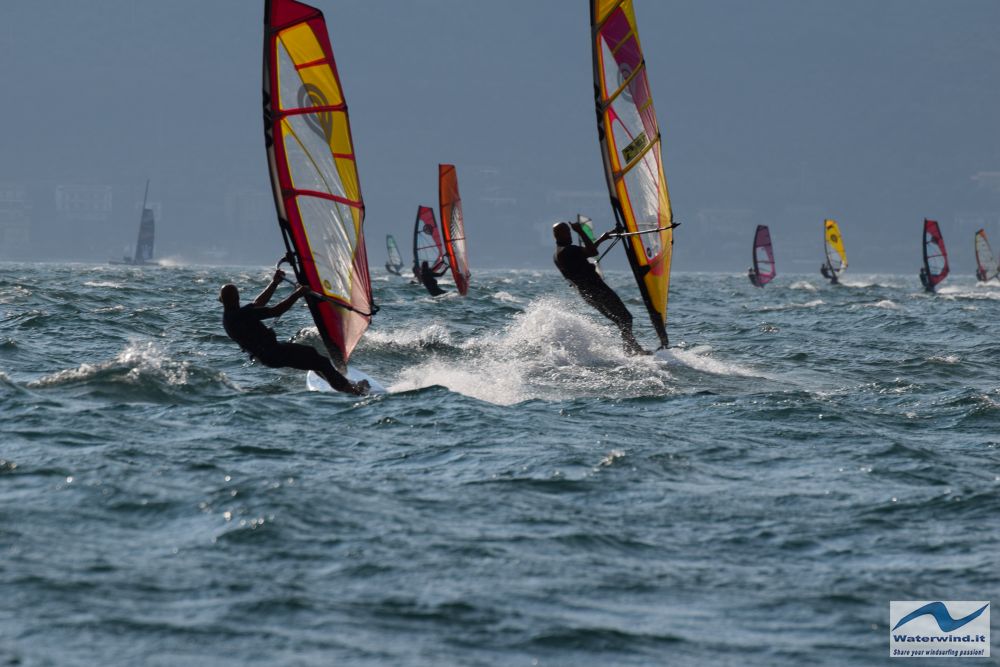 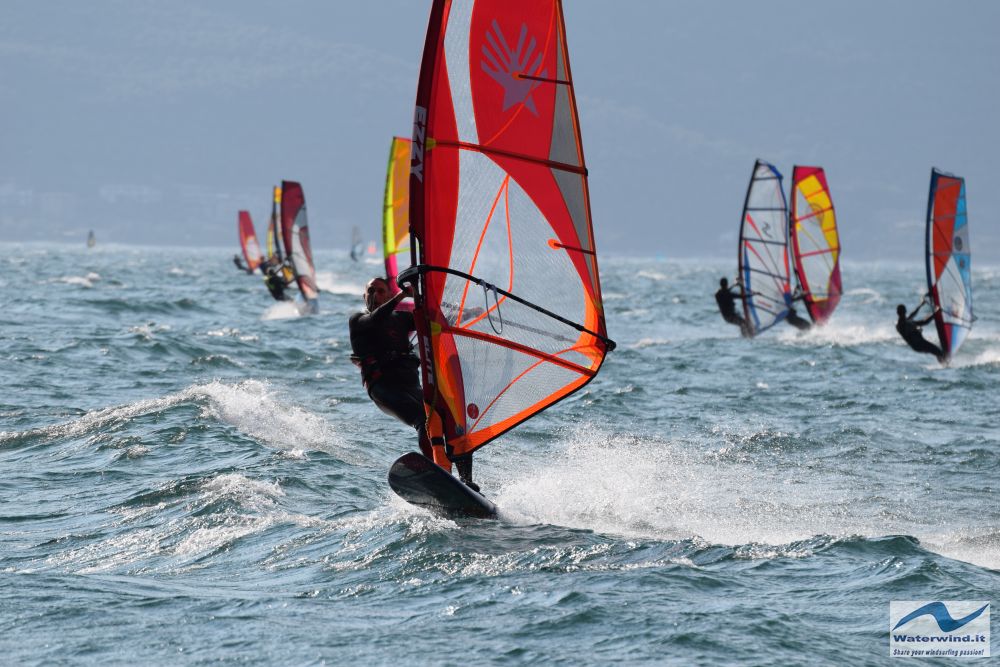 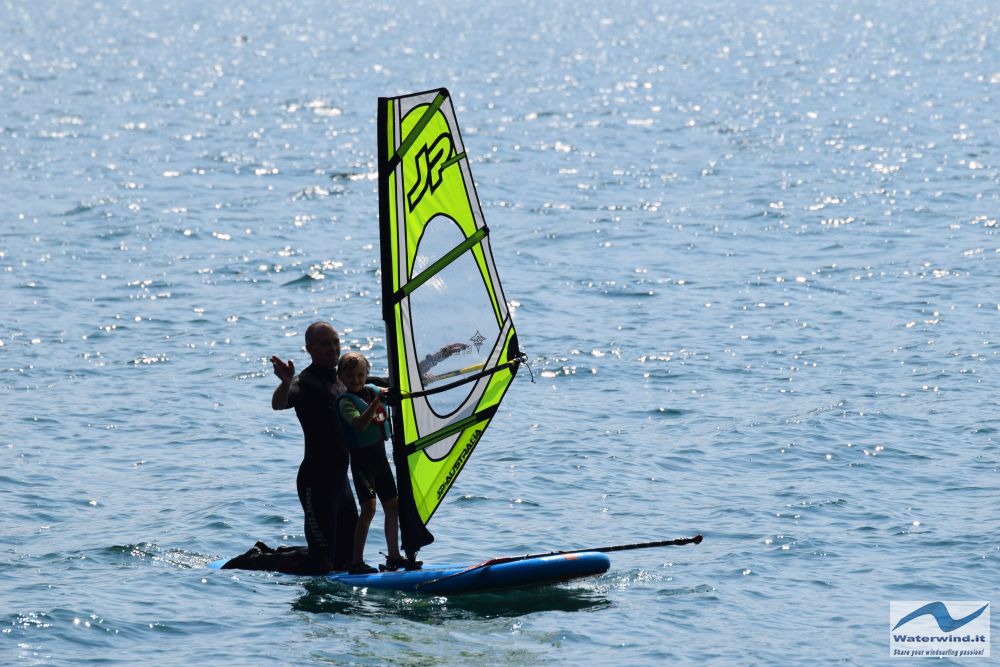 In short, the lakes (Lake Como, too) are keeping us trained in preparation for the upcoming fall / winter season at the sea. And who knows, maybe they will give something else during the week. Follow us in the Waterwind forum!

Click here, to enjoy the whole slidegallery of the day.

The video of the session, With Simone's forward, and much more!