Federico Morisio (ITA 676), a professional athlete who has been involved in the IWT circuit in the last years, sent us this compelling report, unpublished, on his recent experience at the 2019 edition of the Aloha Classic, held in Ho'okipa, Maui, Hawaii.

It is a sincere report to be read in one breath, the kind of story we like. In addition to the chronicle of Federico's race, it contains important technical information; but much more: Federico opens his mind and heart to share the human side of this experience, with his emotions, and reflections. We, sincerely, thank Federico for sending us this report, and we are convinced that this occasion was, however, an important experience that made him mature as an athlete, and that will bring Federico the results he deserves. 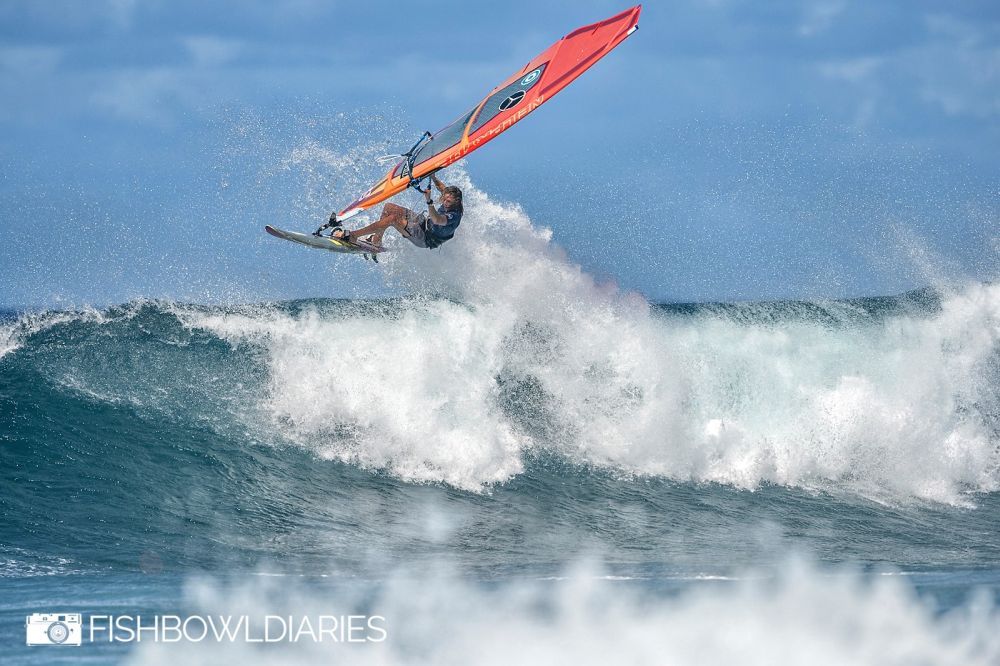 This year I arrived in Maui for the Aloha Classic with a lot to play: after 2nd place in the Topocalma Infernal in Chile in March, the 7th place in Oregon in June, the 5th place in Peru in September and unfortunately not having had conditions for the race in Baja California in August, I found myself in 5th place in the general classification, but only 700 points from Bernd Roediger, 3rd (a victory is 10,000 points, so we were really close), and I also wanted to confirm if not improve my 9th place at last year's Aloha Classic, which objectively had already been a great result.
So, personally I felt a little pressure, which I still like and always motivates me! Unfortunately, the weeks before the race did not go as I would have liked, as, in addition to having to fly to Cincinnati, Ohio, for a couple of days for a future project with one of my sponsors, once back in Maui I injured my left arm, which forced me to stay out of the water for a whole week. Moreover from the forecasts, it could already be glimpsed that, as every year, it would have been an Aloha Classic with the bombs! The forecast gave waves from 10 to 15 feet with a period of 14-15 seconds, or, translated into the language of Ho’okipa, waves from 4 meters minimum up to 8 meters in the largest sets. Experience, risk and strategy are the three keywords for this type of conditions.
On 27 October, the first day of the race, I arrived at Ho’okipa, and surprisingly the conditions are not so huge. Infact, at the last, the forecast had postponed the arrival of the storm by one day. Thus the first race day took place in amusing and affordable conditions with waves from 2 to 3-4 meters and the entire 1st Round of Men Single Elimination took place. Honestly, with these conditions I felt much less stressed and more motivated, having much more experience with waves of this size, as there is much less risk involved!! I went out there and attacked, I gave everything, I used my knowledge of Ho’okipa and I took the best waves mixing good turns with big aerials. This allowed me to win the heat with a total score of 12 points in front of the local and waterman Zane Schweitzer (grandson of the inventor of windsurfing) and to move to the 2nd Round. Not having arrived at the Aloha with the highest level of confidence and training, this first heat and victory were a great boost for confidence and they drove me a lot for Round 2; knowing, however, that that heat would have been in completely different conditions and against opponents of another level ...

Four times world champion Philip Koster, windsurfing legends Robby Swift and Boujmaa Guilloul, and Federico Morisio. This was my heat in Round 2. Conditions: light wind and waves between 4 and 8 meters. Very difficult, it is already difficult just to get in the water and surf in these conditions, and beat these riders even more. But I have to be honest: I felt that this was my chance to make my mark, to make my presence felt and show that I can stand between these names and even beat them. I was ready, angry and motivated. Also beating Philip Koster, I would have given a great turning point to the fight for the PWA world title, favoring Victor Fernandez, Marcilio Browne and Ricardo Campello.
The following day is confirmed in big and difficult conditions with light wind. Before my battery, I manage to get out of the channel without ending up in rocks, and, as my heat starts, I immediately commit a stupid error of impatience: I take a wave that I thought was good, but that actually turns out to be short and soft; as I leave the wave, the one behind is double and breaks upon my head. After several smoothies, I can't even start again with a waterstart, because the wind has dropped even more. Robby Swift also takes a wave, falls and finds himself swimming in front of the rocks, without a bit of air. At one point, after 5 minutes swimming and trying to make a waterstart, I hear the siren of the referee and I see that the heat has been canceled for too little wind. Luckily, I thought, because I made a big mistake that I won't repeat anymore.
I go out of the water in some way and discuss with my coach Ferdinando Loffreda about my mistakes and the conditions, while I prepare myself in case the heat restarts. The wind rises again and they decide to send into the water the heat after ours: my battery would have been the following. I prepare and go in the water 20 minutes before the battery to avoid ending up in rocks and arriving on the line up in time, putting myself in a priority situation to be able to take the best wave.
My heat starts again, same conditions, same opponents and slightly stronger and more stable wind. I was excited and ready.
Unfortunately, I made some unforgivable mistakes. I didn't surf like I know. I was too "safe" and deserved 3rd place in the heat, not going so far as to 3rd Round ... It was a great psychological blow. I knew that I could suffer these waves so big and messy, but for days I was preparing myself mentally because I wanted to get prepared and excited. But once I was in the heat, I suffered mentally and didn't ride like I should. I didn't attack the waves as I know, and I made stupid mistakes that I don't usually make. In fact, I usually perform better in the race than in free-sailing, but these conditions made me suffer. At the last minute of the battery, I found a beautiful wave of 4-5 meters that "opened", and that would allow me to do 4-5 turns and probably get a score that would have allowed me to move to 2nd place, throw out Koster, and go to the 3rd Round. But on the second turn, while I layed the sail, the top touched the water, making me lose my balance and come out of the wave. A disaster. A fatal error that cost me the heat.
I was really upset because I knew I could pass and beat at least 2 of these riders; but I deserved not to pass and from this experience I learned a lot again and I feel the fire inside me to improve and do better next time. Every heat is a matter of life or death, one cannot avoid risking at all and not even risking too much; you need to find that subtle balance between making the best of what you do, pushing your limits, taking risks and at the same time not ending up on the rocks after the first wave or breaking the equipment during the battery. But this time, I really risked too little and I didn't attack these waves as I know and how I should have. Lesson learned. Now go ahead for the next time !!!!!

In addition to this defeat, due to the lack of conditions, we were not even able to do the Double Elimination (the second chance), and unfortunately I did not have the opportunity to get my own back. We were very close to doing the heat for 2 days in a row, with conditions of big waves and light wind side-onshore, but every time before my heat the race was canceled for the day, because the conditions were too extreme: too many people finished to rocks and even an injury. When Ho’okipa is so big, and even with side-onshore wind it really becomes a mission-impossible to go in the water and surf! In the end, I preferred that they did not continue the race in these conditions, because objectively it was just an unnecessary risk: a risk of getting hurt and breaking so much equipment on the rocks.
Thus, I close the Aloha Classic 2019 in 17th place, disappointing for me, and in 4th place overall in the general classification of the International Windsurfing Tour, for the third consecutive year. In spite of everything, I am happy; because I learned a lot again and because I realized I could surf really well here. As for the results, in general I feel that this year I thought too much about numbers and wanting to do well to finish third and etc. I thought too much about numbers, instead of just enjoying every race, having fun and giving my best! I think this was the biggest mistake and for next year I really want to be quieter and compete, because I want it, because I enjoy it, and to show my windsurfing level, and not for a number or a position!
I am very happy, because it seems that the Aloha Classic IWT and PWA is confirmed also for next year; so there will be fun and we'll meet again in 12 months!
A big greeting to all Waterwind readers and thank you so much for your attention! I hope you enjoyed the report and managed to convey a bit of excitement! Hello and I wish you much wind !!

Below, you can enjoy the slidegallery Federico sent to us, with photos of the event. 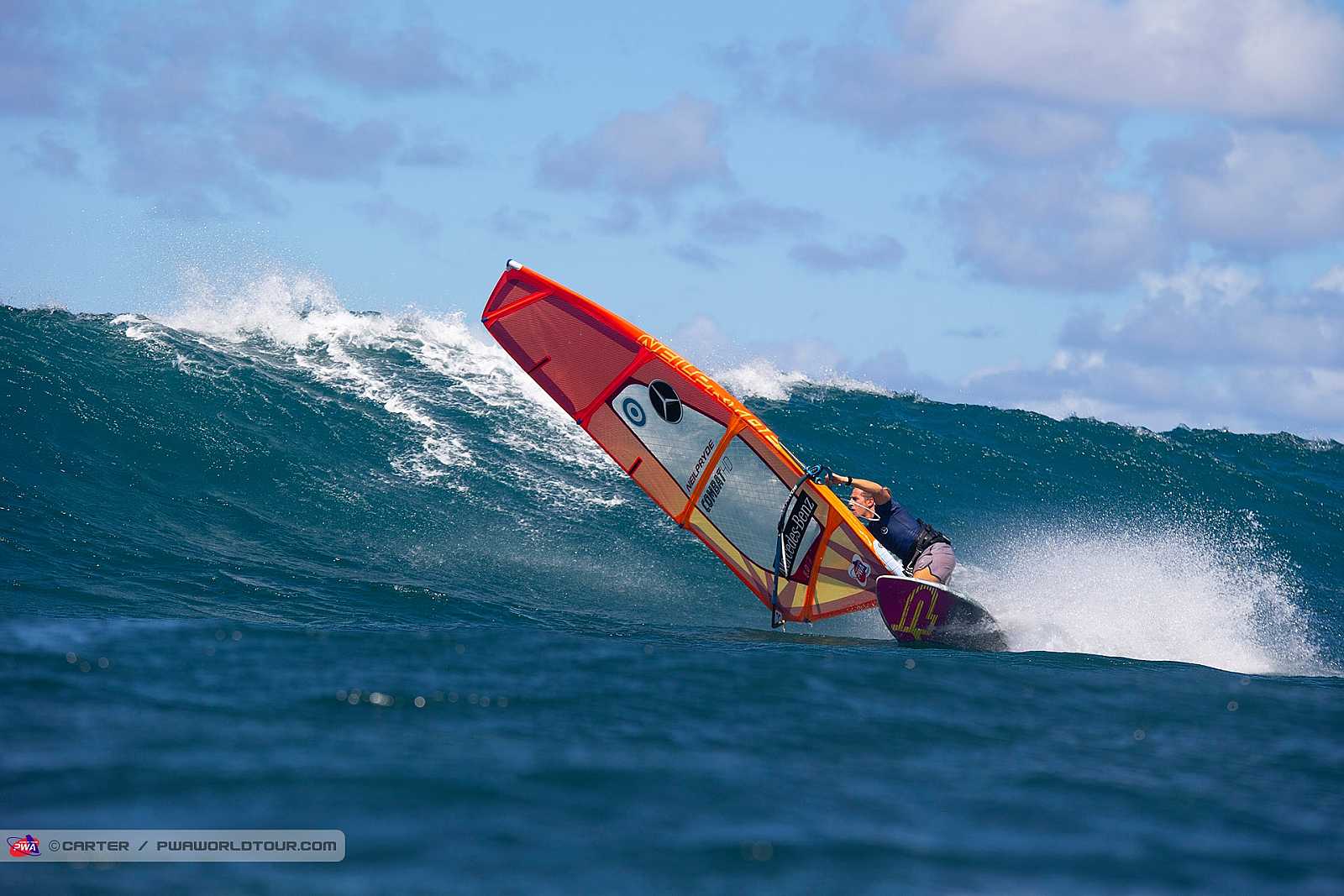 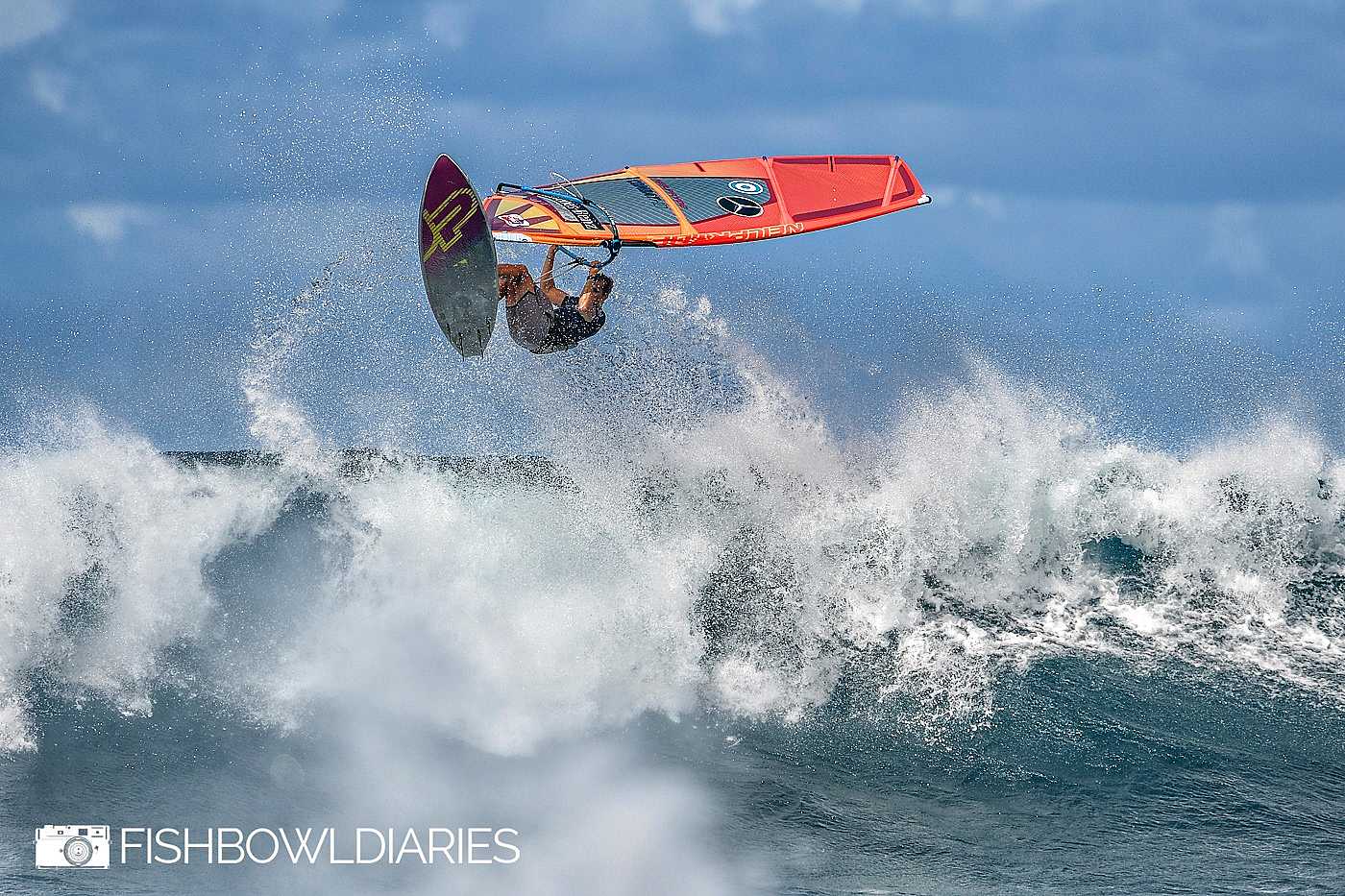 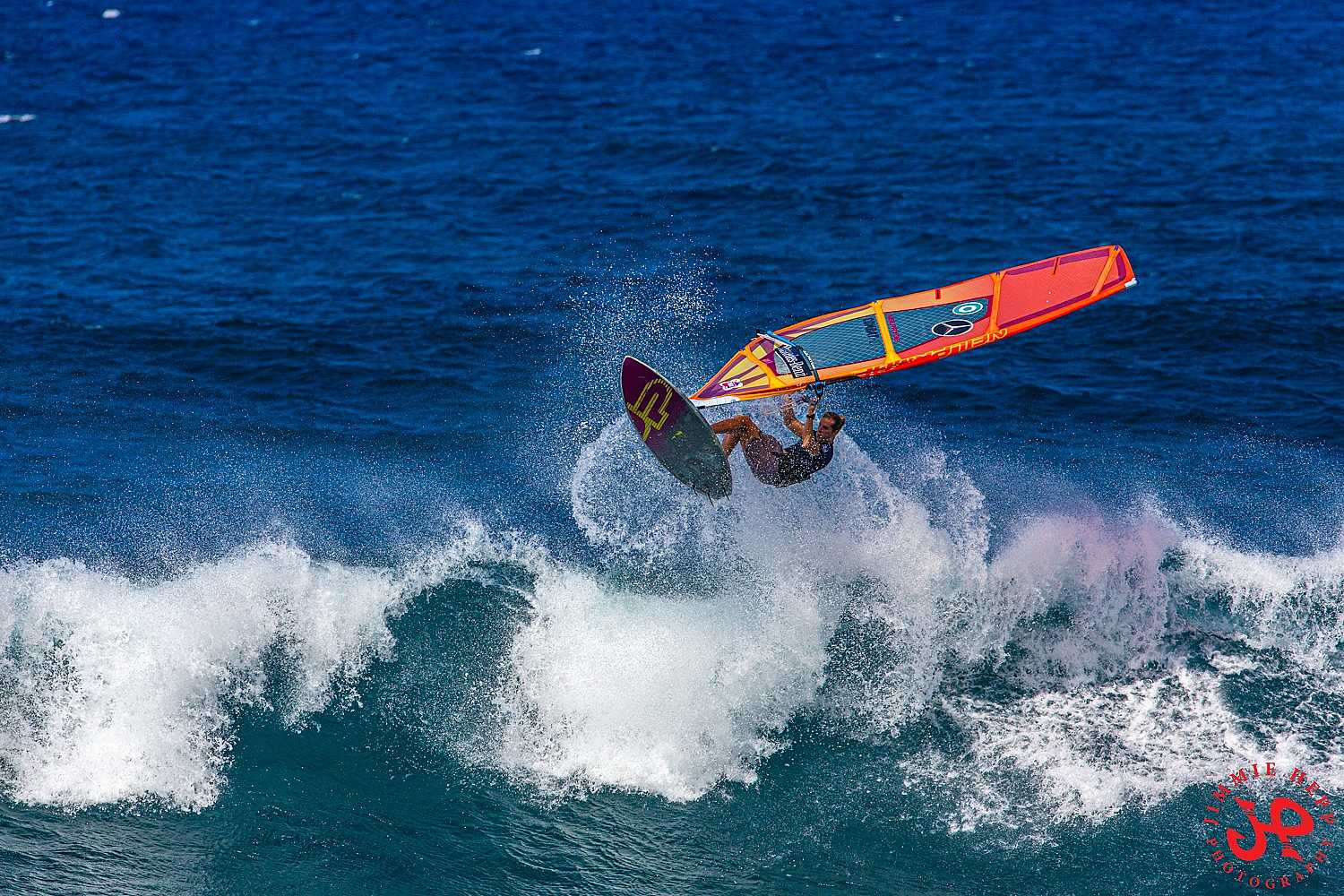 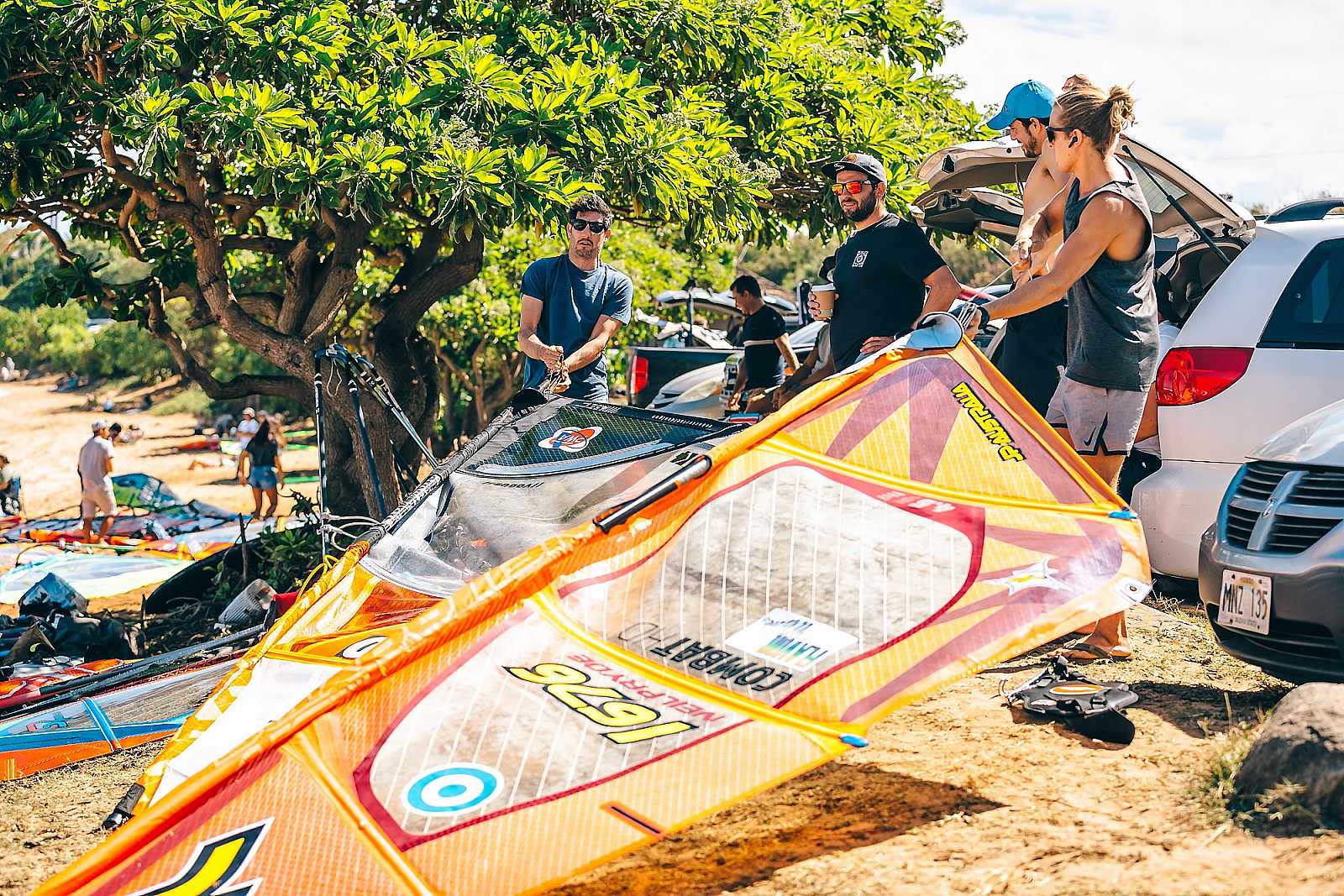 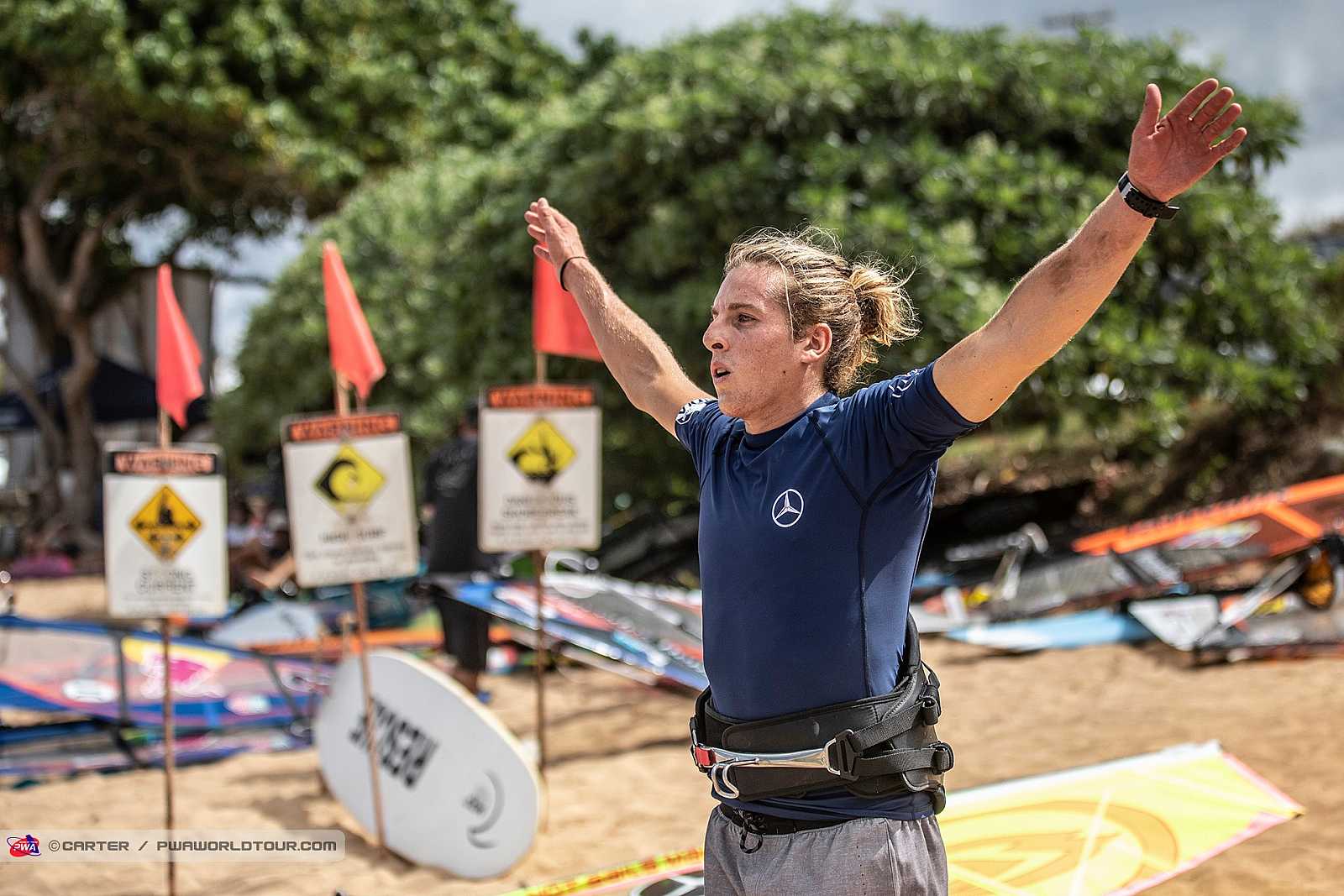 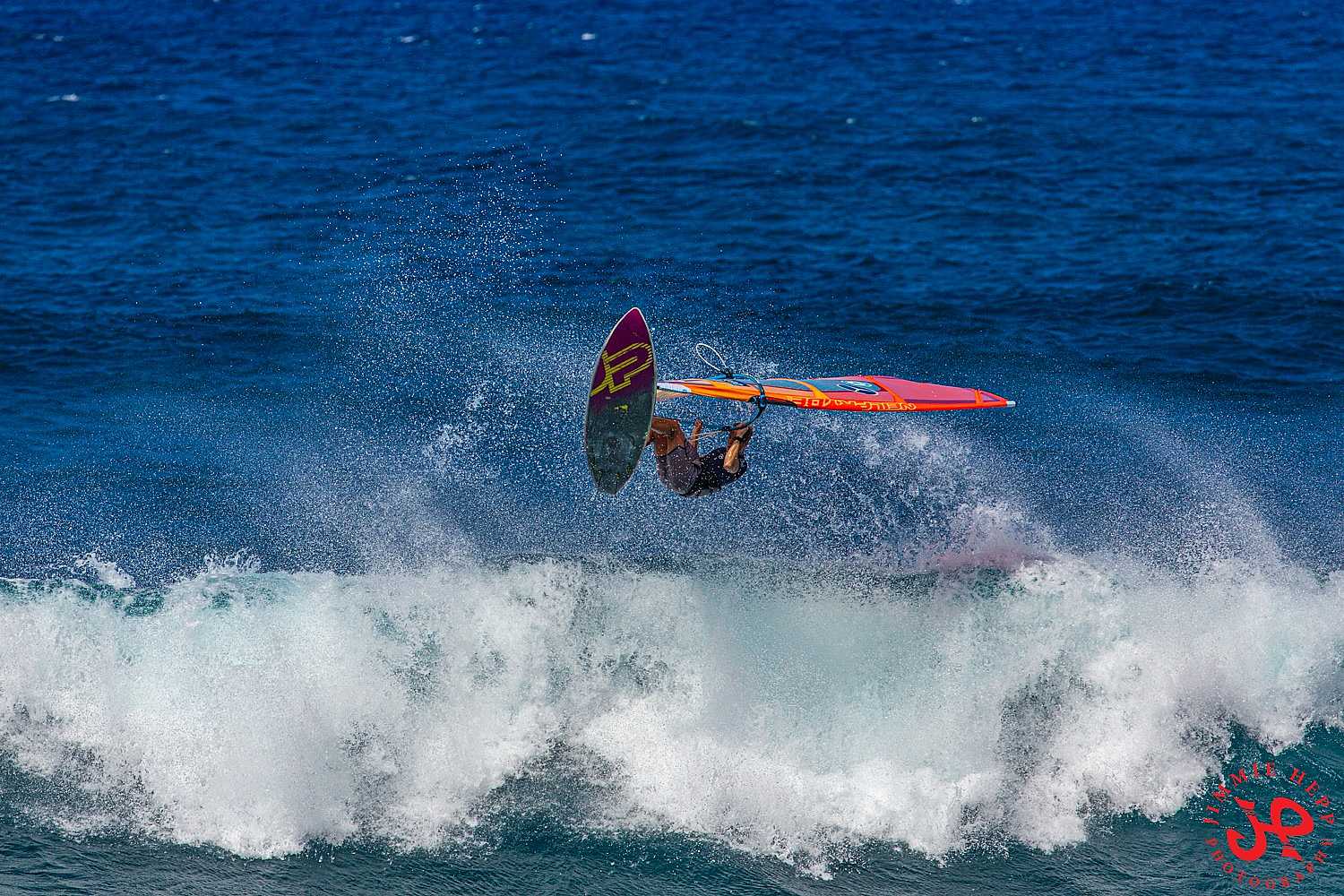 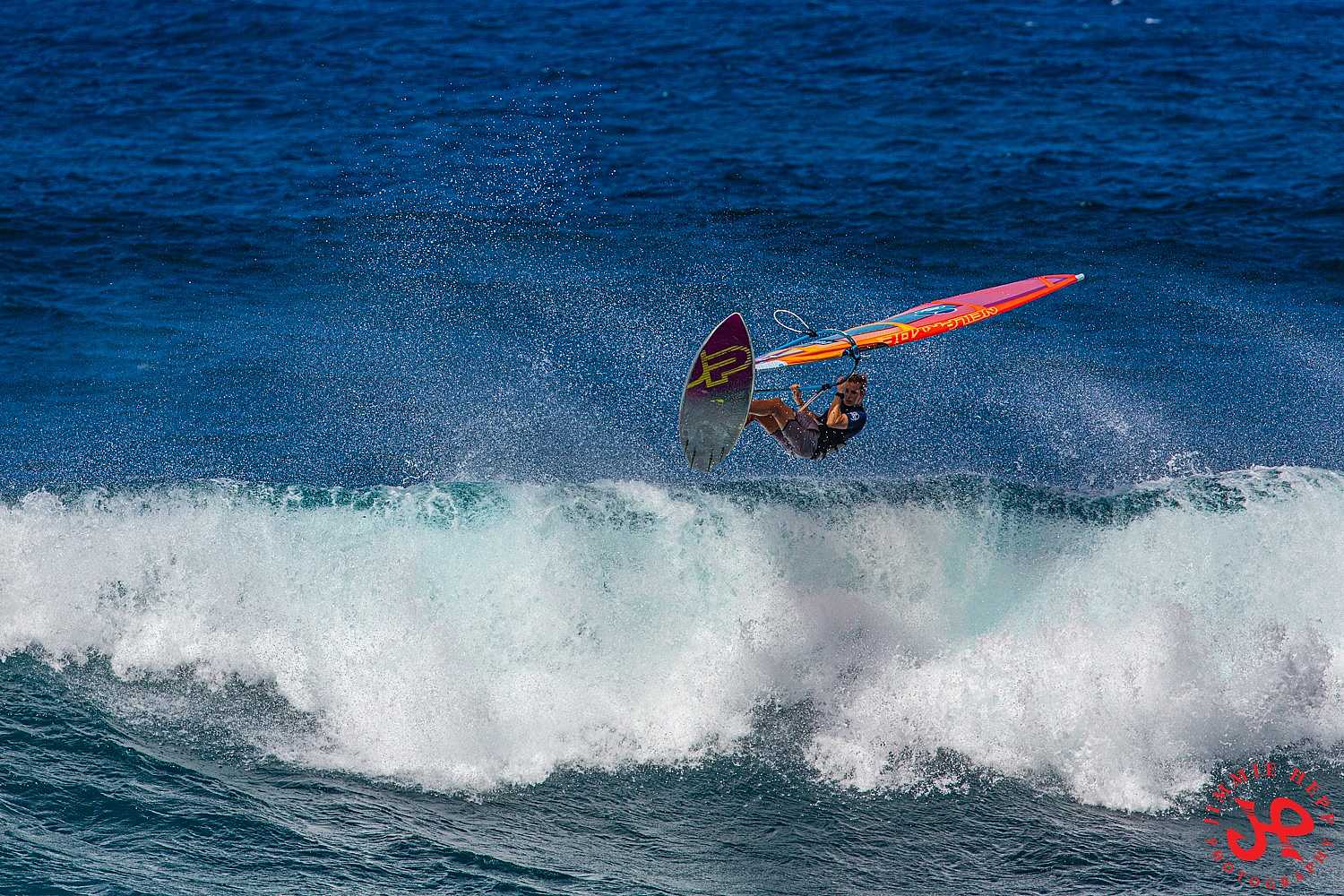 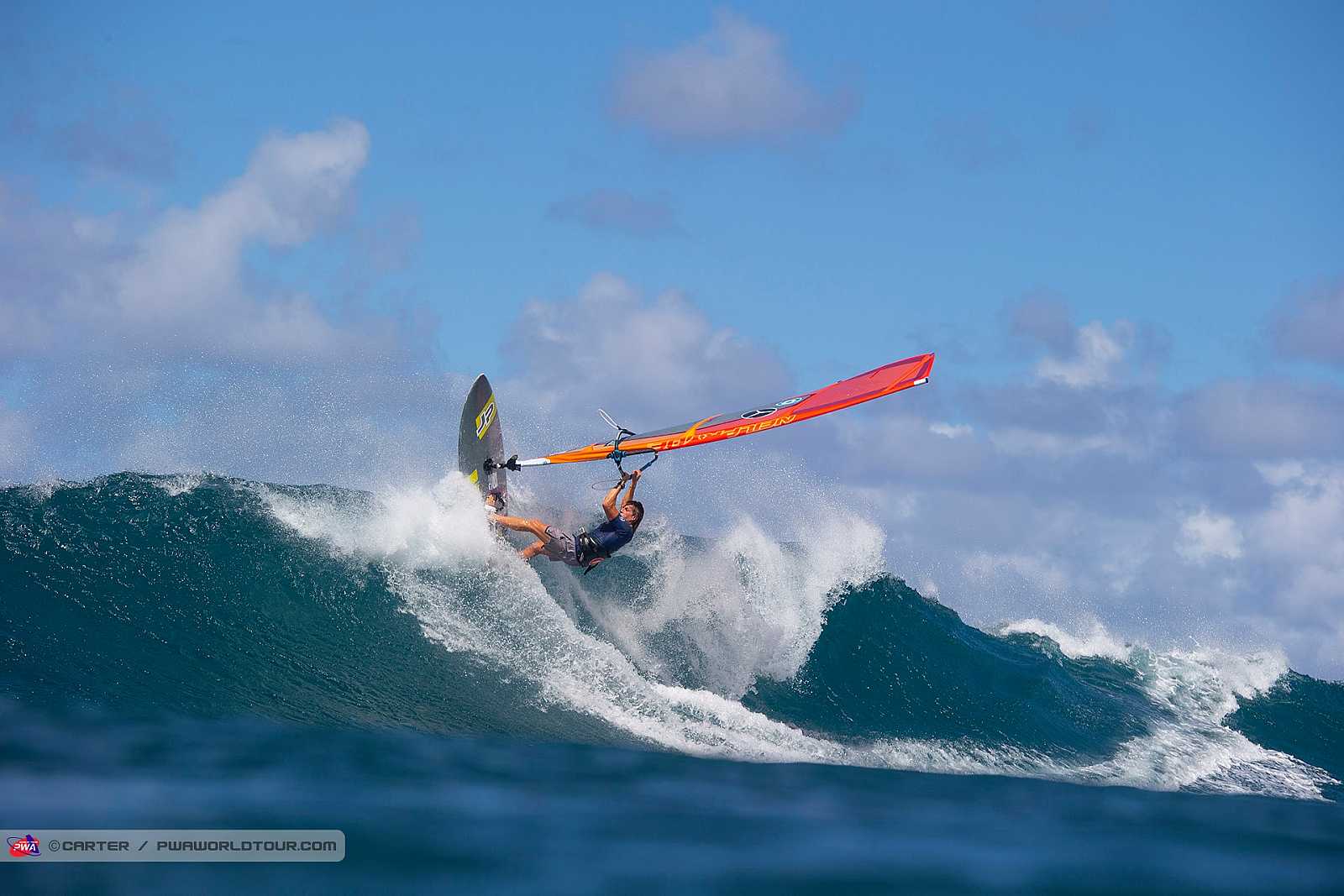 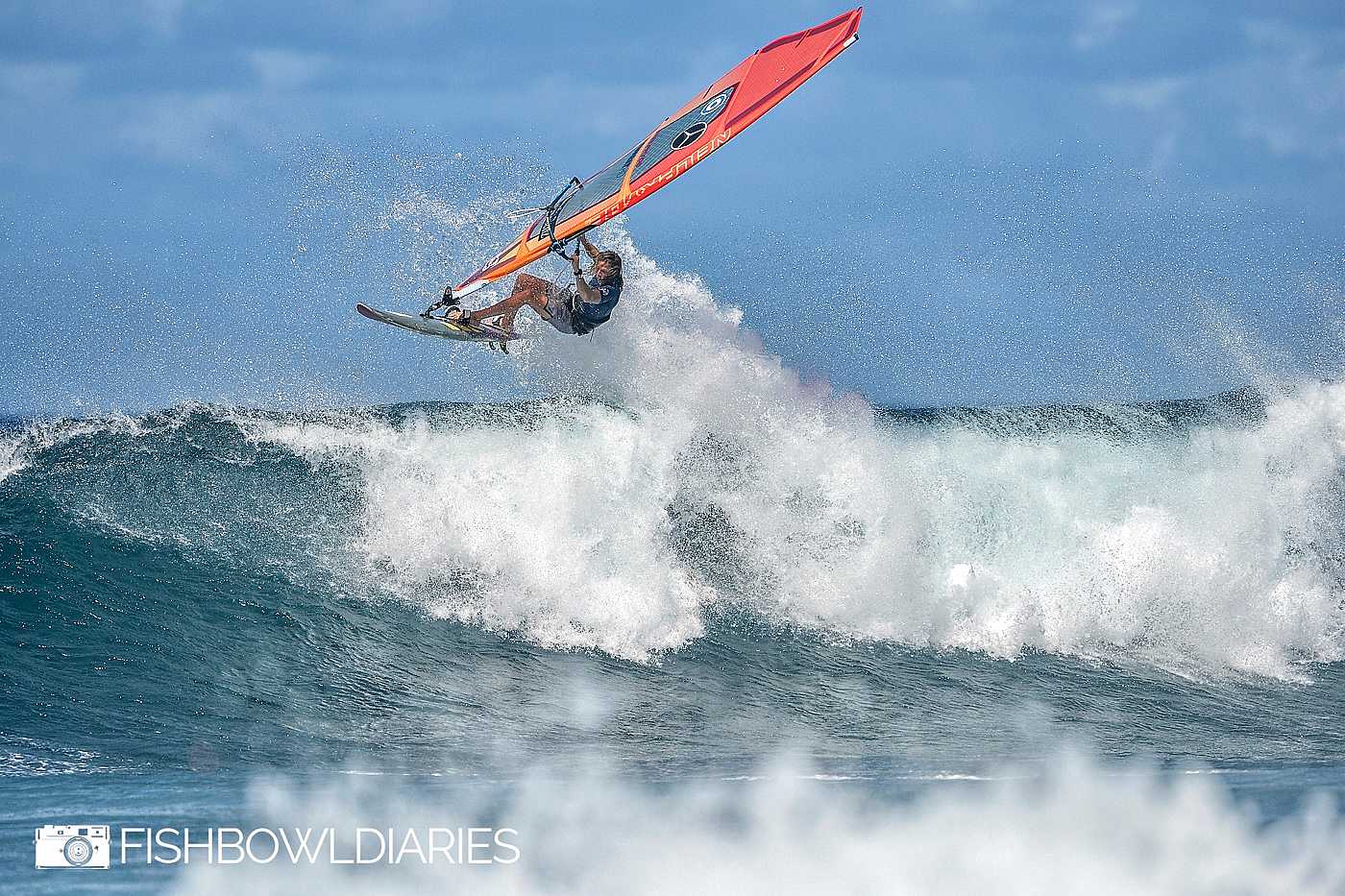 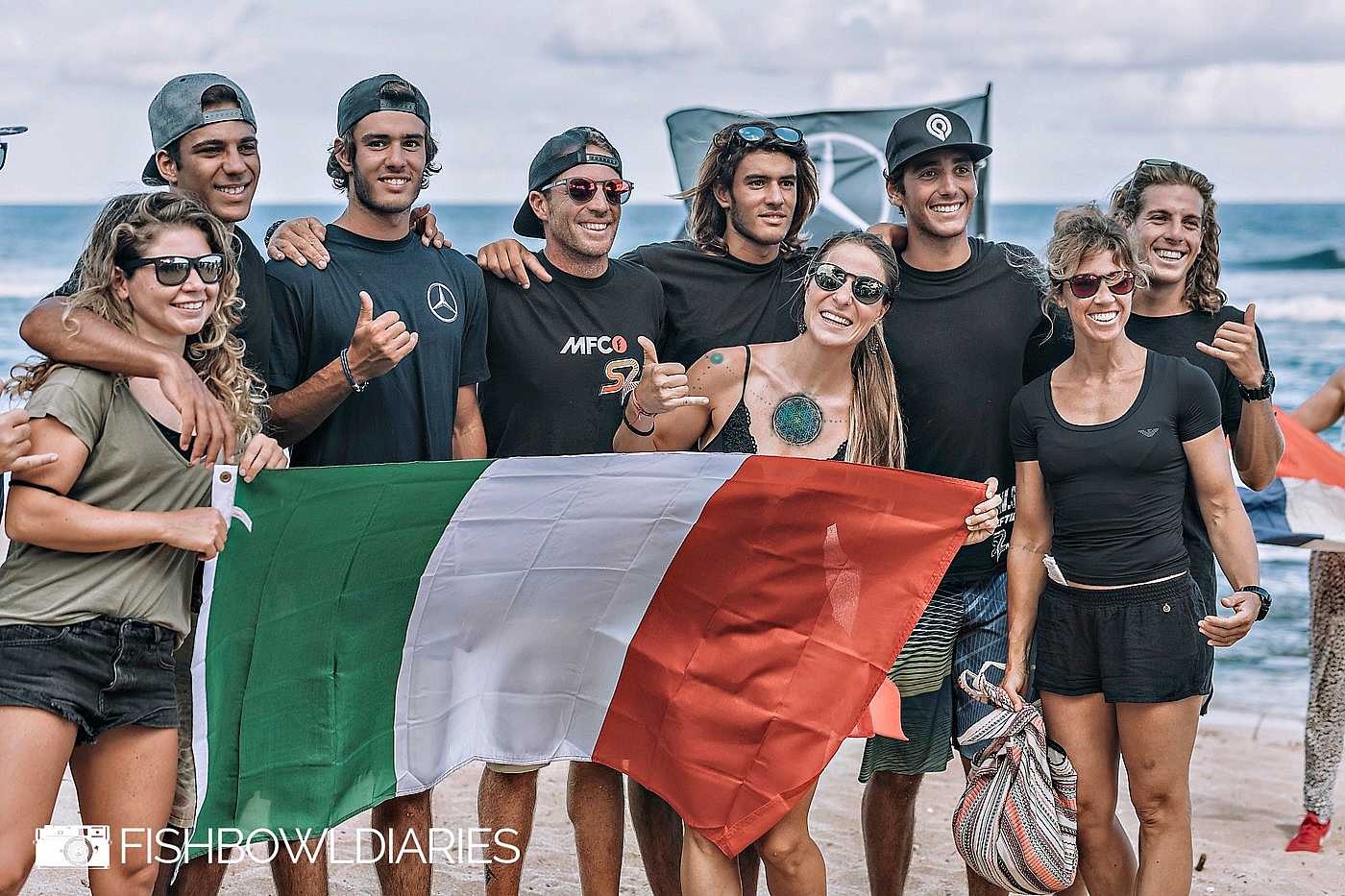