Freeriding is one of the most popular windsurfing disciplines. Easy gliding is the element that almost always makes people become addicted to this sport. The well-known French magazine Windmag has tested 9 2020 freeride boards models. In this article, we summarize the test results.

The tests were published in the March 2020 issue of the magazine, which we invite you to purchase for all the details and for further information. Also read the article on the 2020 freewave boards, and the one on the 2019 freeride boards.

Freeride boards, this year, have been tested mainly in the 135-liter volume by french testers. They are accessible and tolerant models, to easily enjoy the pleasure of gliding. Most of the boards have two straps positions: a more central and advanced position; a more external and backward position. The first makes entry into planing easier, the second allows you to adopt a stance that guarantees more power, with a better lever arm on the fin.

The aforementioned volume will allow you to take your first steps in the planing, and to progress in the harness use, but also to have a good performing board when you will have achieved an adequate level. They are boards that ideally match with a sail without cambers, but that can also be used with a sail with two cambers, on light wind days. 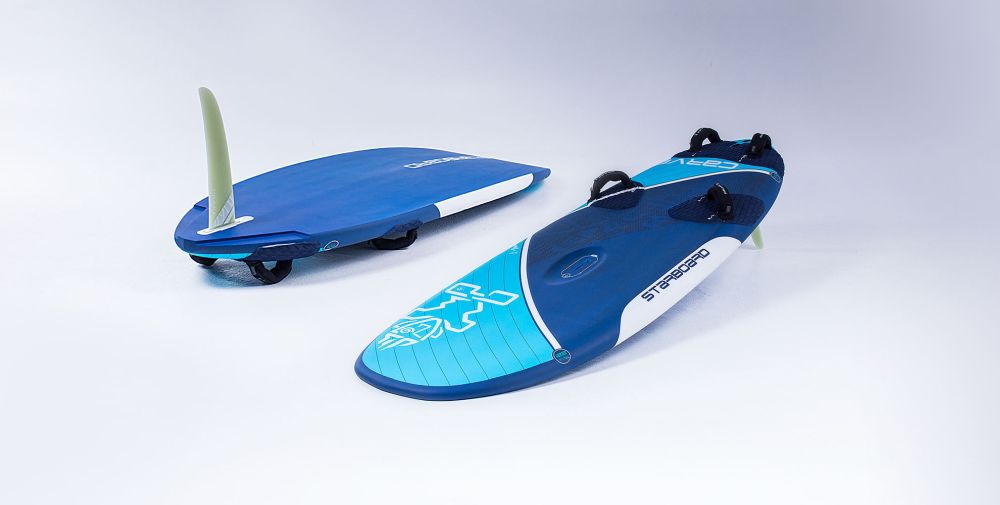 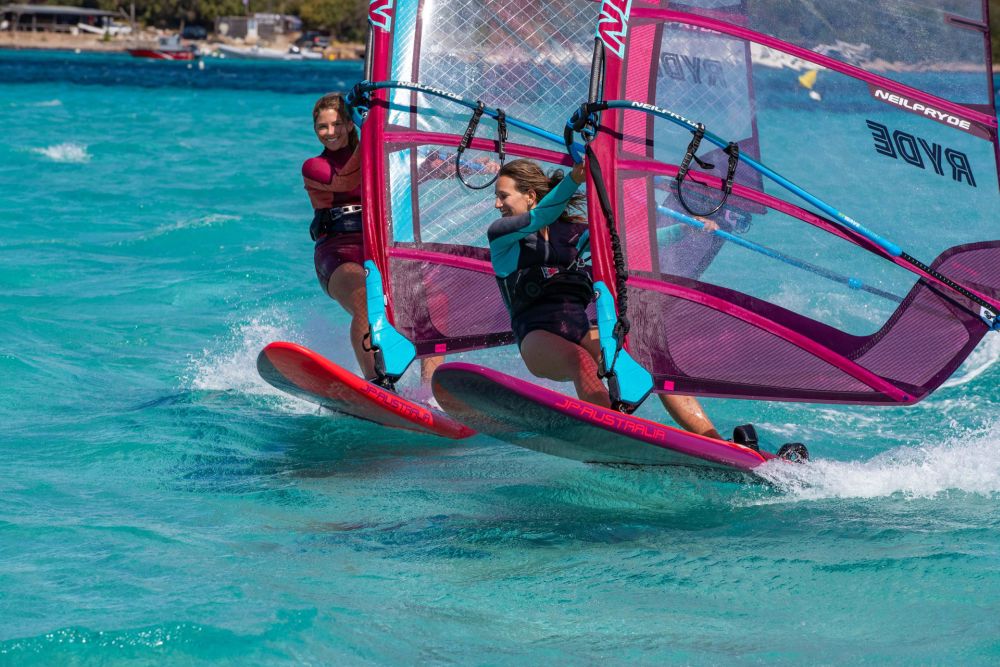 The boards were tested with wind ranging from 10 to 18 kn, in flat water conditions, or slightly choppy water surface. The test spots were Six Fours, Le Brusc, and Almanarre, in southern France.

The board tested were as follows:

The AV Boards Chubby has a rounded shape, characterized by a fair width, and a reduced thickness. It has a carbon kevlar protection, integrated in the nose. Overall, it is a board that guarantees good durability. The volume of this board is lower than that of the other tested boards. It is designed for riders who have already good experience, and it needs a slightly higher  wind than that required by the other boards. Good gliding performance; too bad the pads and straps are not up to par.

The Fanatic Gecko has always been a reference in the freeride boards field. It has a compact shape, with a good width around the mast foot. The rails have become more parallel. As for performance, it is difficult to find faults with the Gecko, which proves ideal from all points of view. It offers an excellent compromise between accessibility and performance. It lets get acquainted with speed, without being afraid. It is intended for a wide range of riders, from beginners to the consolidated freeriders.

The Goya Carrera has a classic shape, straight and long, with only 70 cm as width. The thickness is evenly distributed, and it offers a good volume under your feet. Unlike the Volar, the other Goya freeride, the Carrera is destined to a more aggressive rider. It offers sensations and maneuverability, and an excellent construction quality.

The lines of the I99 Performa are rounded, with the board featuring a maximum width of 82 cm, one of the most generous in this category, and a large planing surface. In terms of performance, it is a board that gives an impression of lightness, which remains in control, and which represents a model accessible at any level. It has a wide wind range exploitable.

The JP Magic Ride has a wide shape around the mast foot, and an elongated nose. It has a generous thickness, in the bow and a good volume also in the stern, thanks to its rear width. It has three possible straps positions. As for performance, simplicity is, above all, the image that represents the Magic Ride. It is a board that pleases you without requiring a particular technique. It is not particularly fast. 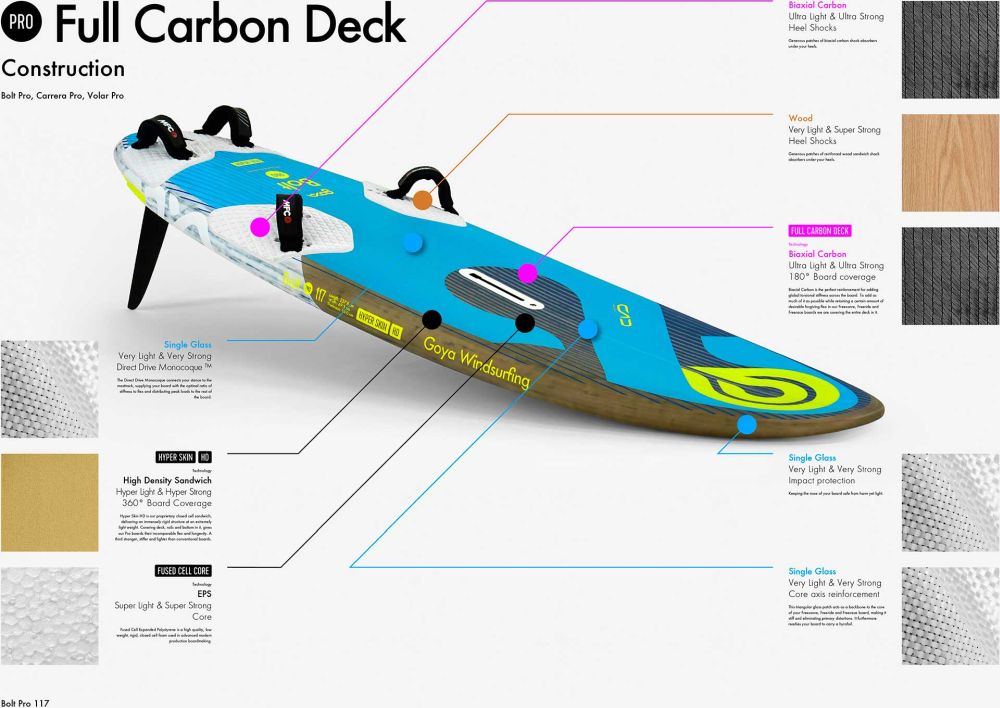 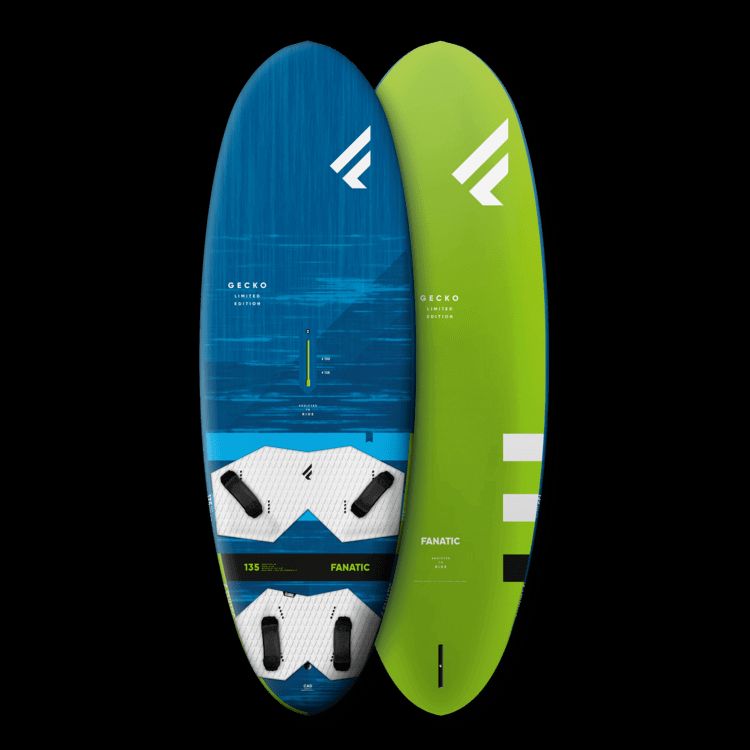 The JP Super Ride is designed with by parallel rails, moderate width, and also with a fairly compact shape. The Super Ride offers a performing behavior without being too demanding. Unlike the Magic Ride, the sensations are sweetened.

The RRD firemove is a board without half measures, with a maximum width of 85 cm. It has a clearly cut tail, to reduce the final surface, with the rails that close quite suddenly. The RRD guarantees easy, stable gliding, and an automatic pilotage. As an added value, it offers the possibility of mounting a foil fin for light wind days. 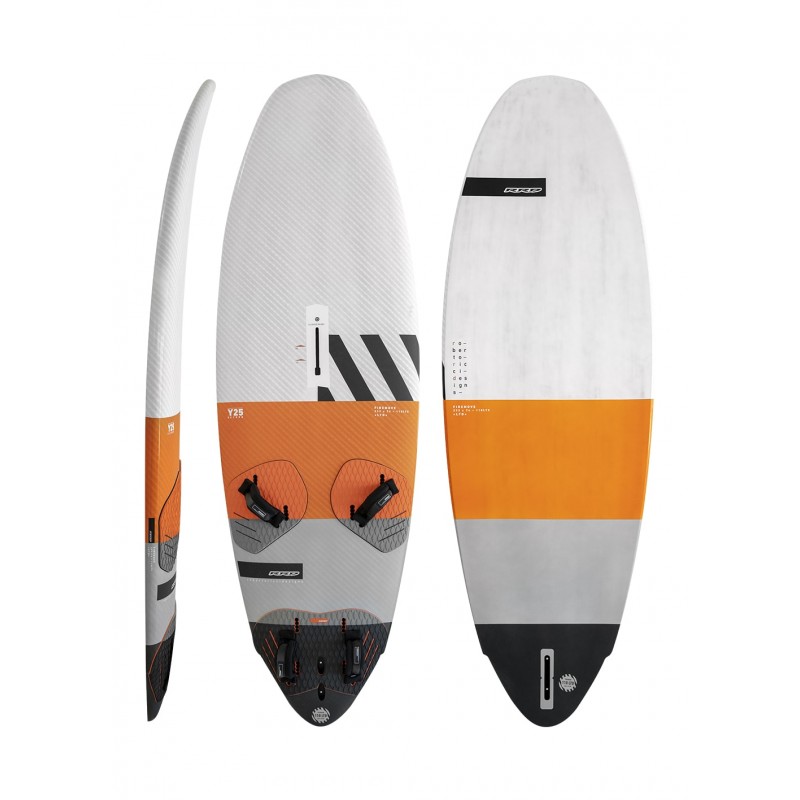 The Starboard E-Carve is characterized by a generous width over its entire length. On the other hand, it has a rather reduced thickness. Regarding the performance, despite its considerable size, it has proved to be an agile board under the feet, one of the most active among the tested freeride boards, performing, and light feeling when riding.

Finally, the Rocket 135 has balanced and modern dimensions: 247 cm in length, and a maximum width of 77 cm. The Carbon Flex construction (ex Ltd) represents the top of the series. Thanks to the homogeneous distribution of the volumes, it is an accessible, multipurpose board that offers beautiful performances. The Tabou is excellent for taking your first steps, but will satisfy even the most advanced freeriders. You handle and ride it without confusion, ensuring control that will contribute to rapid progress. 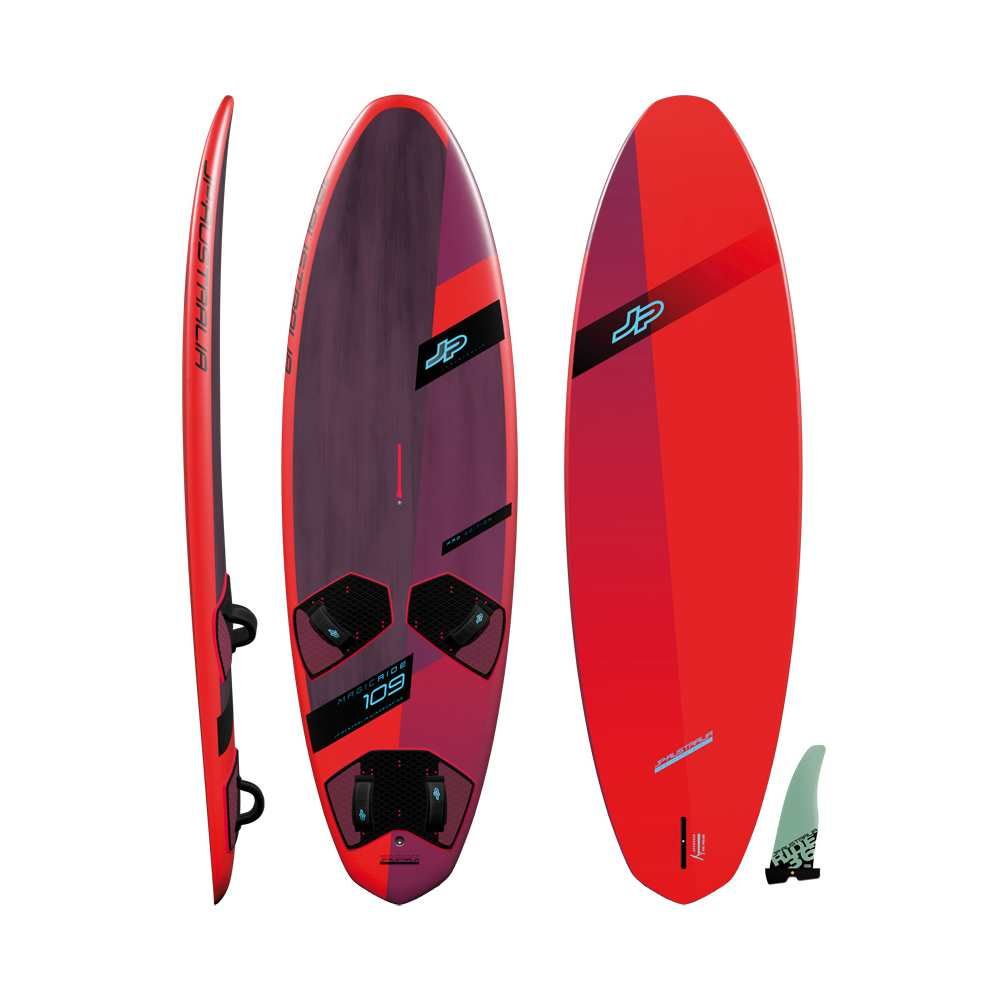 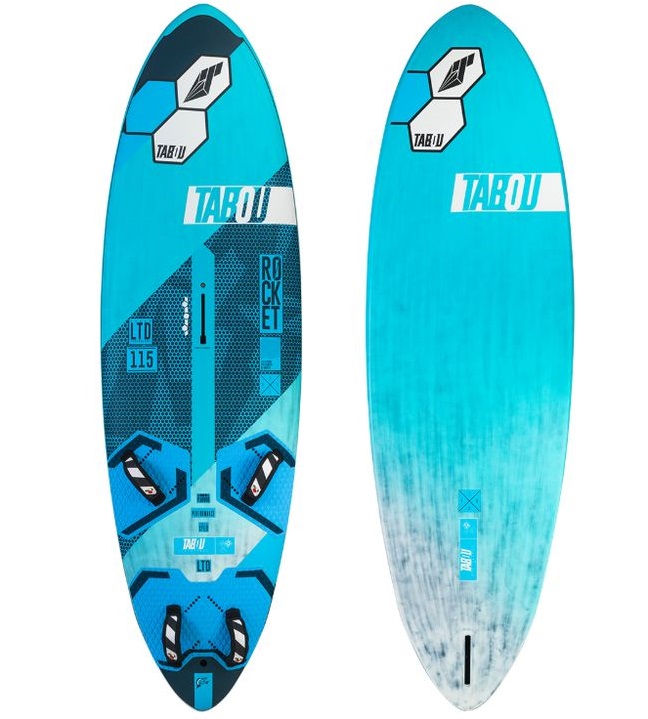 In summary, the characteristics of the boards can be grouped as follows.

The RRD firemove 135, and the JP Magic Ride 129 are the most accessible boards. Thanks to its generous planing surface, the firemove is a light wind beast. Planing is guaranteed. The Magic Ride facilitates the first steps in gliding, with balanced sensations.
I99, Fanatic Gecko, and Tabou Rocket are at the heart of the freeride program.

The I99 Performa guarantees a riding in absolute lightness, despite a rather bulky shape. The Fanatic Gecko will appeal to a large group of freeriders, from the most experienced to the beginner, offering a sober and peaceful sailing in all conditions. It is also equipped with quality equipment. The Rocket will also satisfy a wide audience: it is accessible for the first glides, but it is effective in more demanding conditions. It is very versatile.

The JP Super Ride, the AV Boards Chubby, the Goya Carrera, and the Starboard E-Carve are boards characterized by excellent performance in planing at high speed. The Super Ride offers first-class comfort, stays in control, with excellent performance. Riders will love his sweet conduct. AV Chubby is reserved for more windy conditions. The Goya Carrera offers a dynamic and fun riding. The Starboard will also surprise with its dynamism, and will offer superb gliding.

Most of the tested boards have a carbon construction. The same models exist in the less expensive fiberglass version, which offers a less nervous, more tolerant behavior, but, in any case, guarantees good sensations, in occasional practice.

As for accessibility, the I99, the JP Magic Ride, the JP Super Ride, the RRD firemove, the Tabou Rocket are the best. The rest are at an intermediate level, with the exception of the AV Boards.

As for the planing start, the best are the RRD Firemove, the Starboard, the Tabou Rocket; the others show intermediate performances, with the exception of the I99, which has lower performances, from this point of view.

As for control, the best boards are the I99, the JP Super Ride, and the Tabou Rocket; the other boards show intermediate performances, and are more or less all equal.

As for comfort, the Fanatic Gecko, the 2 JPs, and the Starboard E-carve, are clearly the best, followed, a short distance away, by the Goya, and the I99. AV boards, RRD, and the Tabou Rocket offer less comfort (lower quality of pads and straps).

The preference of testers fell on the Goya Carrera, and on the Starboard E-Carve.